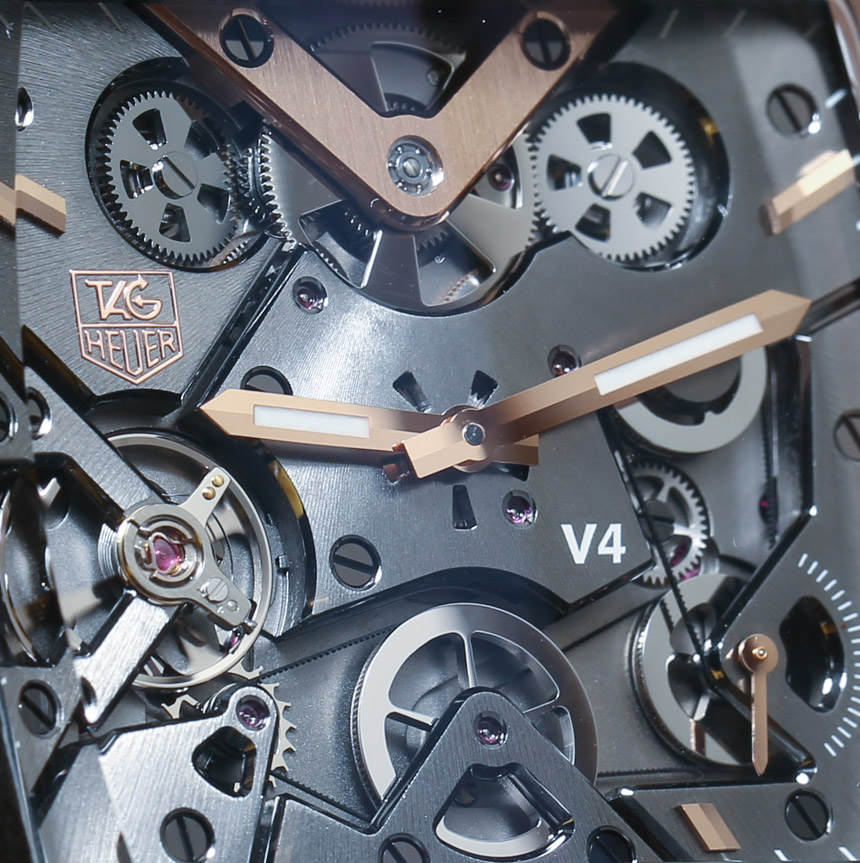 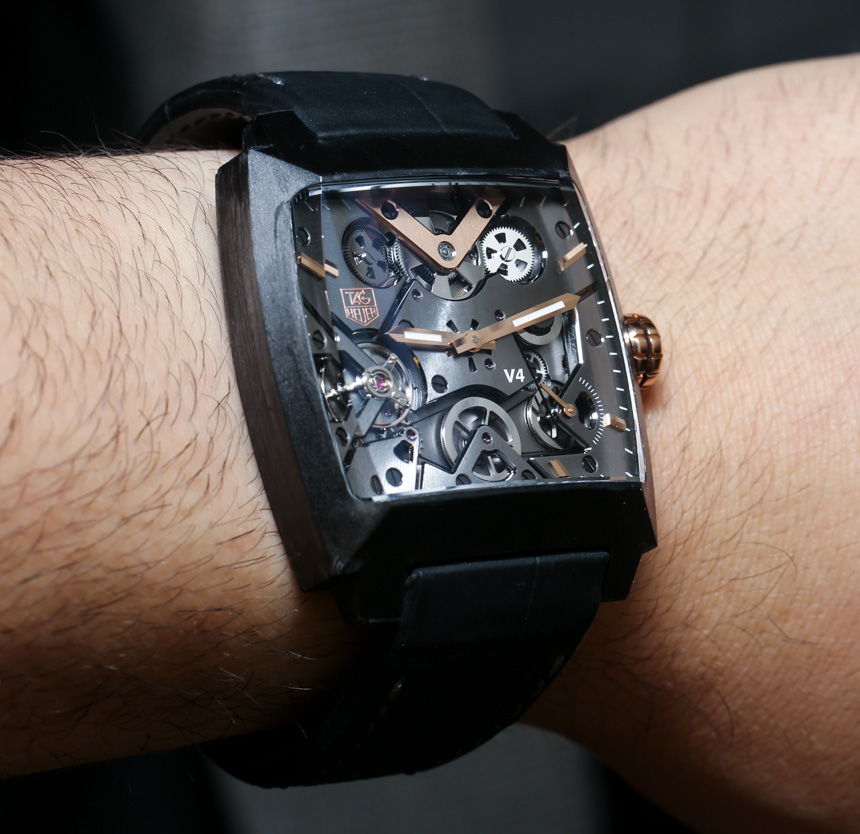 It is a bit hard to believe that after all these years this is the first hands-on article we’ve done with the famous TAG Heuer Monaco V4. It just goes to show that cool watches can fall through the cracks (though the video in this article is from a look we did in 2012). If you don’t know, the Monaco V4 was originally a sort of concept watch designed for TAG Heuer by Jean-Francois Ruchonnet back in 2004. Given that we are writing this in 2014, I guess it is the 10th anniversary of the watch. Having said that, TAG Heuer did not come close to releasing the watch (which used many belts instead of gears in the movement) until several years later.

Five years to be exact. Designers in the watch industry such as Ruchonnet are no doubt talented and inspired, but are often known for delivering “incomplete projects.” What that means from a technical standpoint is that the Monaco V4 plan he gave to TAG Heuer was not for a working timepiece. Whatever credit is due him must be tempered with the notion that it was TAG Heuer itself that poured resources into the research and development necessary to get the automotive-themed movement to actually work. There was a serious plus side to this though, all the effort required to make the Monaco V4 a reality helped create a new high-end division at TAG Heuer. 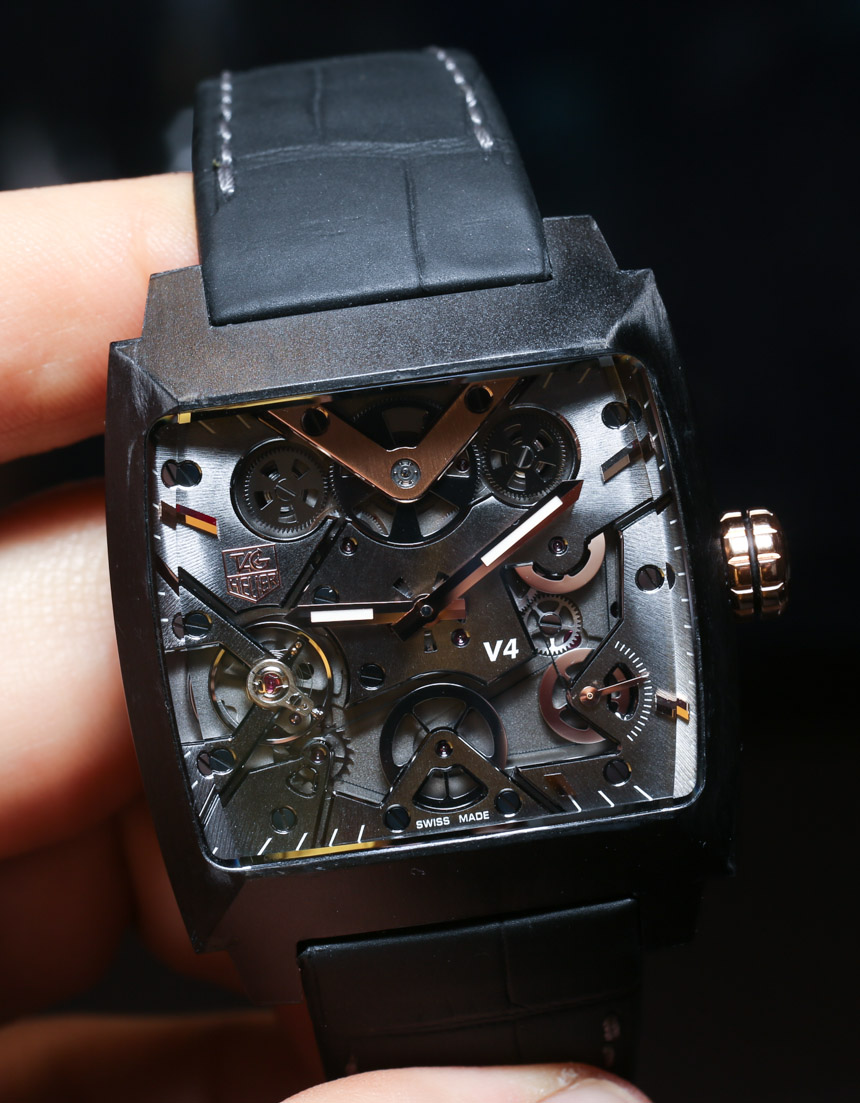 When it was finally released in 2009, the Monaco V4 was probably the most expensive TAG Heuer timepiece ever made. It was limited to just 150 pieces, and an almost forgotten fact is that one of the original Monaco V4 watches was sold at auction in the 2009 edition of Only Watch in Monaco. A 39mm wide square, the first Monaco V4 comes in an all platinum case.

Since then TAG Heuer has produced other limited edition models. And why wouldn’t they? According to TAG Heuer, the development time to make the Monaco V4 movement a working reality took 14,200 days of research. That is days, and surely accounts for a range of specialists on the job. Even given the modest nature of Swiss expediency that is a lot of time. So with such a big investment it only made sense for TAG Heuer to offer new versions of the Monaco V4 on a regular basis. 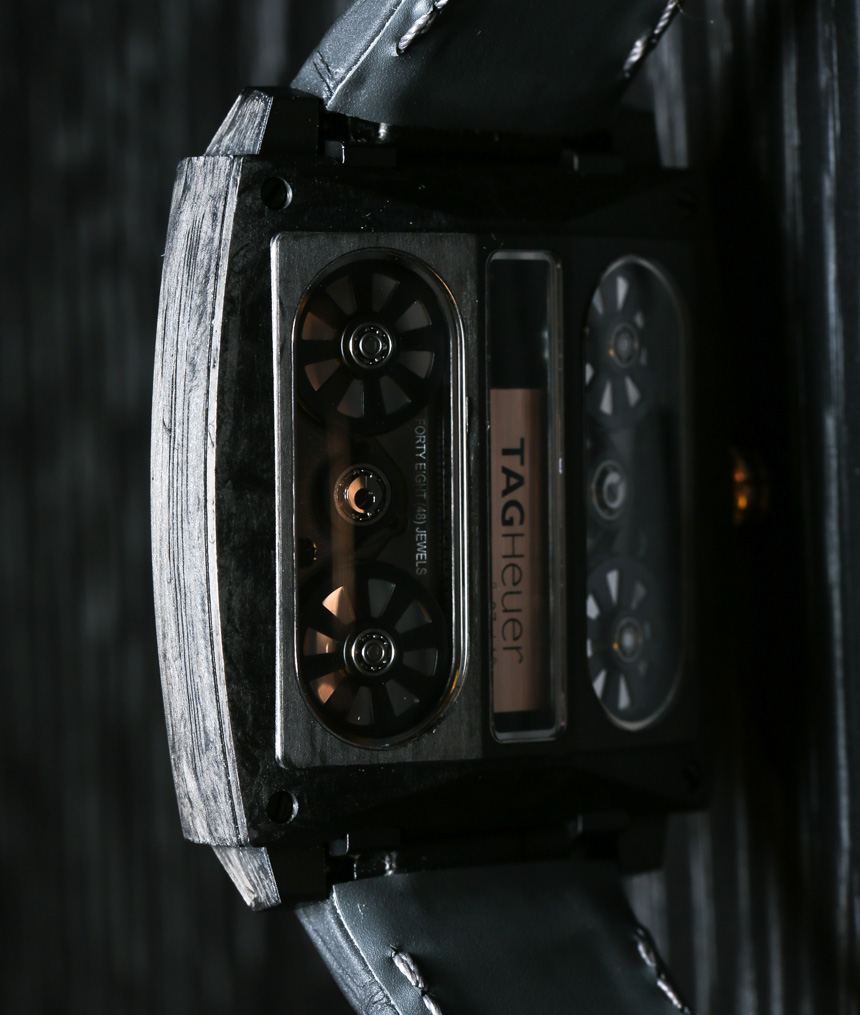 Even with a concept borne in 2004, the Monaco V4 is still a very cool looking timepiece. The movement was designed to model an automotive engine in a few ways. One of the most ambitious elements was use of transmission style belts versus traditional metal gears for parts of the movement. Transmitting power via belts seemed possible enough, but it proved very difficult for TAG Heuer to ensure reliability and chronometric performance. In the end, TAG Heuer succeeded and the Monaco V4 is actually said to be a rather accurate watch.

The piece has a dial that doesn’t get old. The amazing design proves why people wanted to work with Ruchonnet in the first place. Blending traditional mechanical elements with modern design, the Monaco V4 was a “cool” way of showing off your status as a watch nerd. Functionally it only showed the time with the hours and minutes along with a subsidiary seconds dial at 4 o’clock. Things keep getting more interesting on the back of the watch. 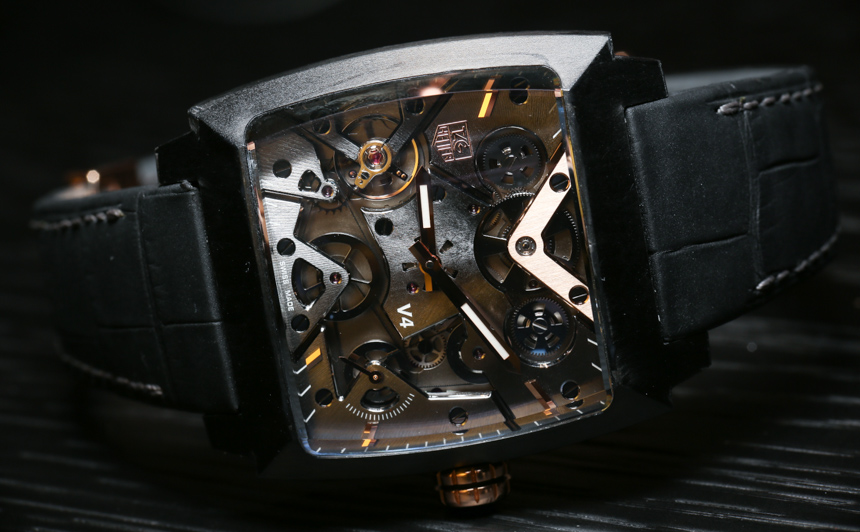