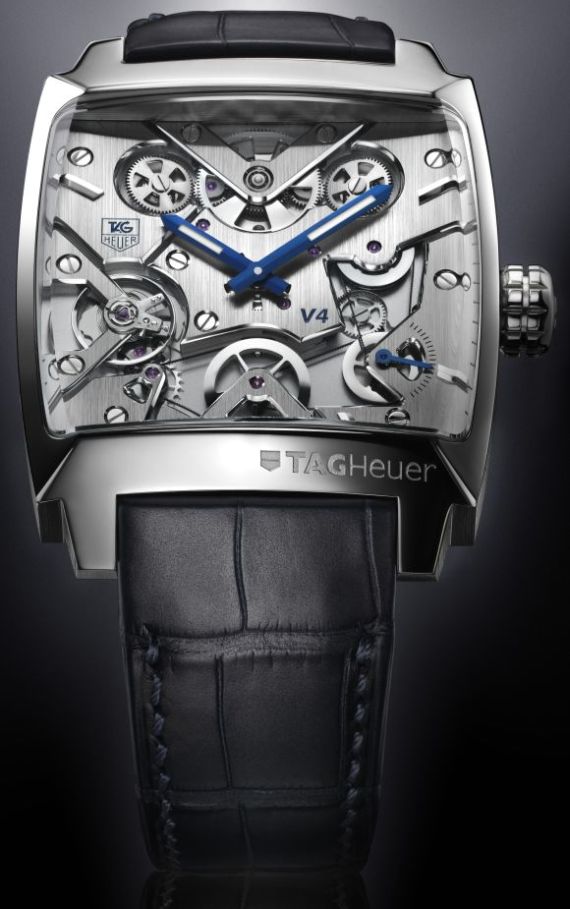 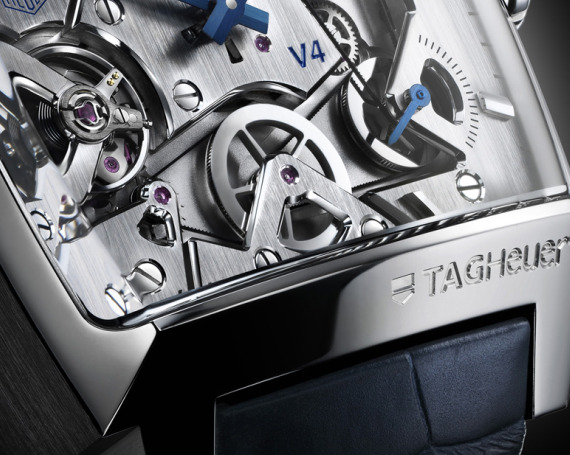 I love that Tag Heuer made this watch. I don’t love that I can’t afford it, but at least a few people can. Tag Heuer is hoping that 150 people bite. The first of 150 pieces of this new Tag Heuer Monaco V4 watch will be auctioned off at the Only Watch 2009 charity watch auction. The other 149 of them are up for grabs. Tag Heuer has been known to make interesting watch concepts that that are eye catching, but I don’t know how often they ever actually made the watches. With the average price of a Tag Heuer watch retailing at probably $2,000 this is a major step up. I wonder watch is going on at LVMH (parent company) that made this possible.

You of course get that the “V4” name is meant to remind you of a car engine. So is the look of the movement as seen through the rear of the watch. The four turbine looking cylinders as the four corners of the movement are each the mainspring barrels. Together they hold 52 hours of power reserve for the watch. You’ll notice that on the front and year of the watch there are a number of belts, just like in an engine. These transmission belts are cool to look at and replace many of the smaller gears that connect the larger gears. These are called pinions. The transmission belts are constructed in the same way as those in engines, just miniaturized. Meaning they still have a metal wire going through them for strength. And like those on engines, likely need to be replaced every… few 100,000 miles, or hours of operation in this instance (guessing on when they will need to be replaced, but you know they will be at some point).

Advertising Message
According to Tag Heuer, the Monaco V4 watch took them 14,200 days of research and development to make. That is sure a lot of time. Something like years. Still that does not make sense, as it is many people working on the project together. The watch case takes the familiar Monaco shape, but is made out of 950 platinum. Very ritzy for a Tag Heuer. There is a large sapphire crystal over the face and caseback that is specially curved, and I am sure the watch looks simply fantastic. The dial has an interesting curved three dimensional look. The watch does not have much for functions though. Just the time with a subsidiary seconds dial that I once thought was a power reserve indicator as it looks like one. At least the blue hands stand out nicely.

Other than the use of transmission belts in the movement, the big thing is the use of micro ball bearings instead of synthetic rubies between the gears and the movement plate. Tag Heuer claims that the ball bearings have less friction that the rubies. You also have the linear weight that serves as to winder the automatic movement. Basically, as you move your hand the weight moves up and down (as opposed to oscillating in circles). It does not have a lot of travel room as you can see, but Tag Heuer says the system works quite well. What is also impressive is just how accurate the movement is. Tag Heuer says that the movement deviates by just plus or minus 4 seconds a day. Well within Chronometer range.

Each watch movement takes 165 hours of labor to hand assemble, and represent something special among the Tag Heuer line. From sub $1000 quartz watches up to this Tag Heuer Monaco v4 limited edition watch that retails for $80,000 (I have also seen indications that Tag Heuer my have raised the price to 100,000 Swiss Francs, at least in Europe). 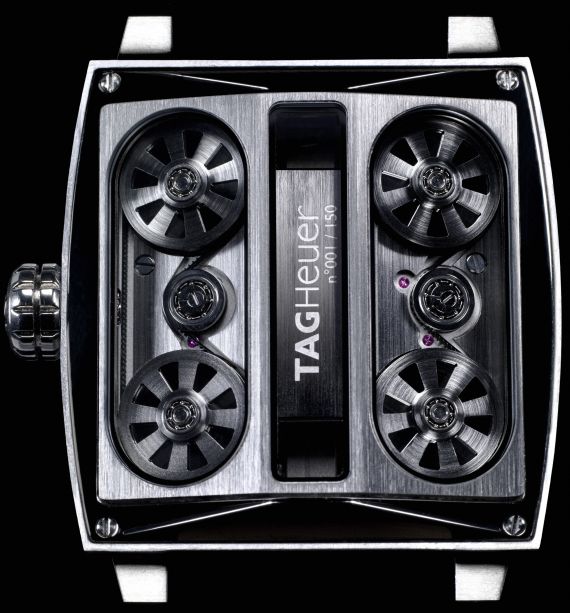 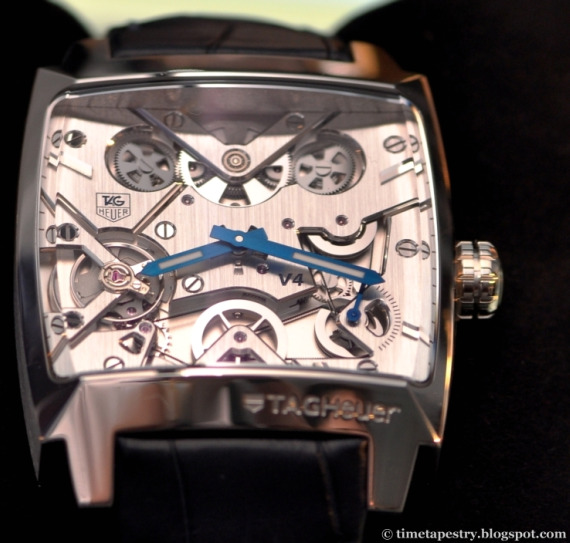 Above image via Time Tapesty, with courtesy from Raphael Too.

Technical Specs of the watch straight from Tag Heuer:

ENERGY
2 PAIRS OF BARRELS IN SERIES, SET IN PARALLEL AND INCLINED AT 13°, STORING 450g OF ENERGY EACH: 900g TOTAL STRENGTH