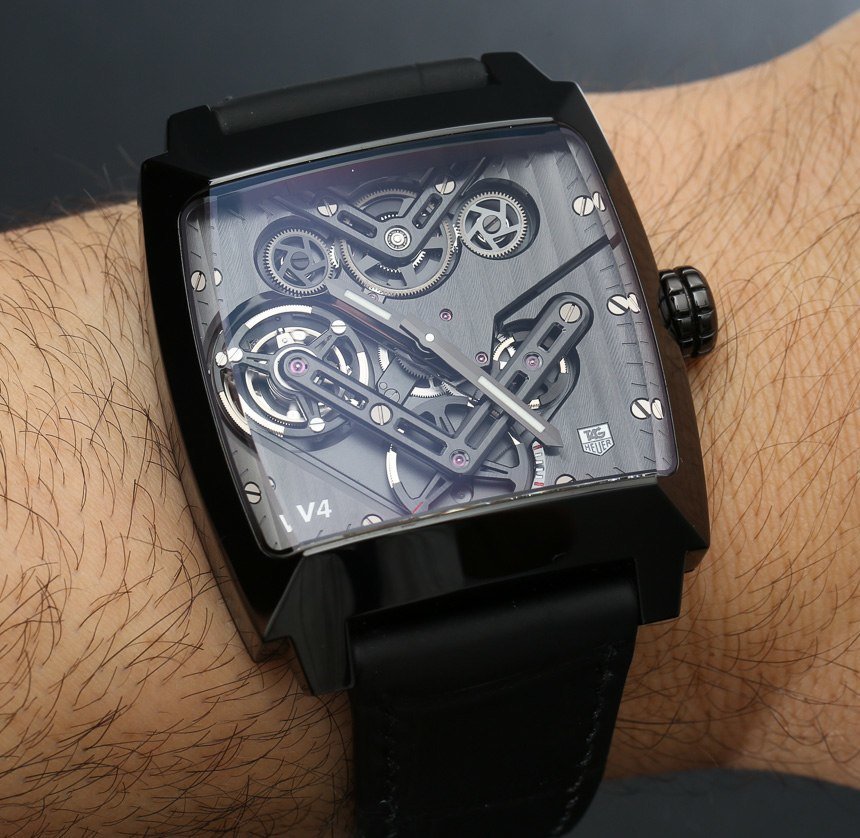 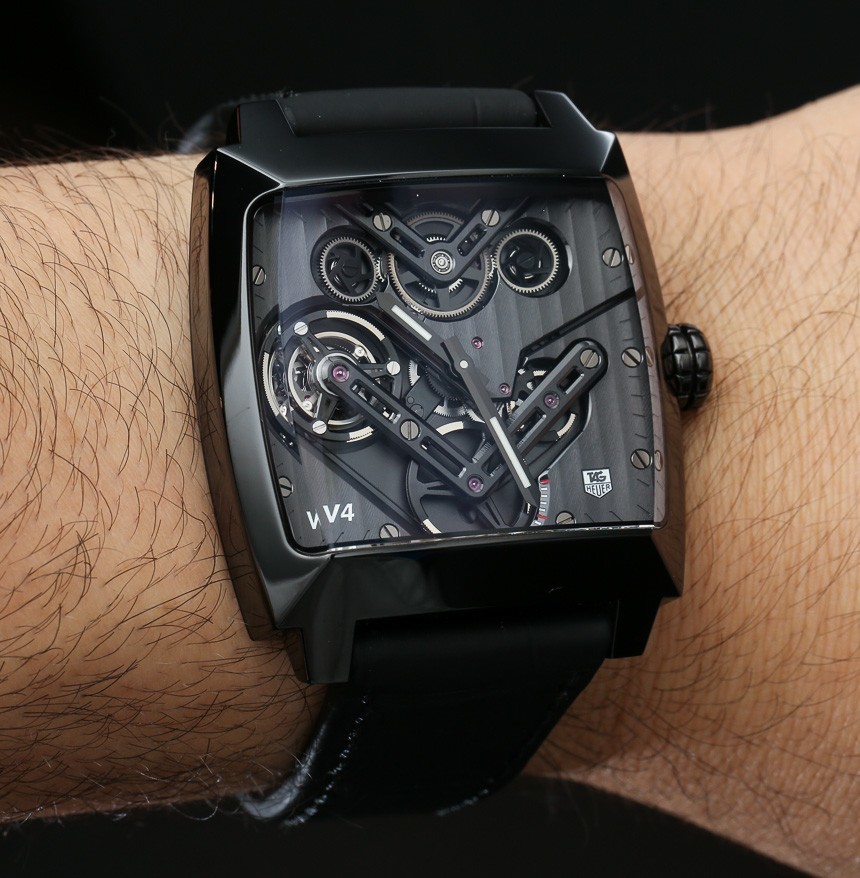 For 2014, TAG Heuer presents an even higher-end version of the watch that began “high-end TAG Heuer.” This is the TAG Heuer Monaco V4 Tourbillon, and it places a tourbillon escapement into the world’s first “belt-driven mechanical watch.” Bored by your normal tourbillon watches? How about you try a belt-driven tourbillon on for size.

The TAG Heuer Monaco V4 Tourbillon (aka Monaco V4T) comes in time to celebrate the 10th anniversary of the famed Monaco V4 – the watch that was never meant to be. When it was presented by TAG Heuer in 2004, it simply didn’t work. In fact, the design that TAG Heuer purchased (it was designed specially for them) just never worked to begin with. As the story goes, I believe, TAG Heuer hired its current head of product development, Guy Semon, to make the Monaco V4 finally work. It took a few years (about five) but TAG Heuer finally succeeded, with minimal changes to the original design, in making the Monaco V4 movement finally operate. Apparently, the project was so interesting that TAG Heuer kept Guy Semon aboard to keep the new high-end division of TAG Heuer going… which over the years has been responsible for some extremely cool products. 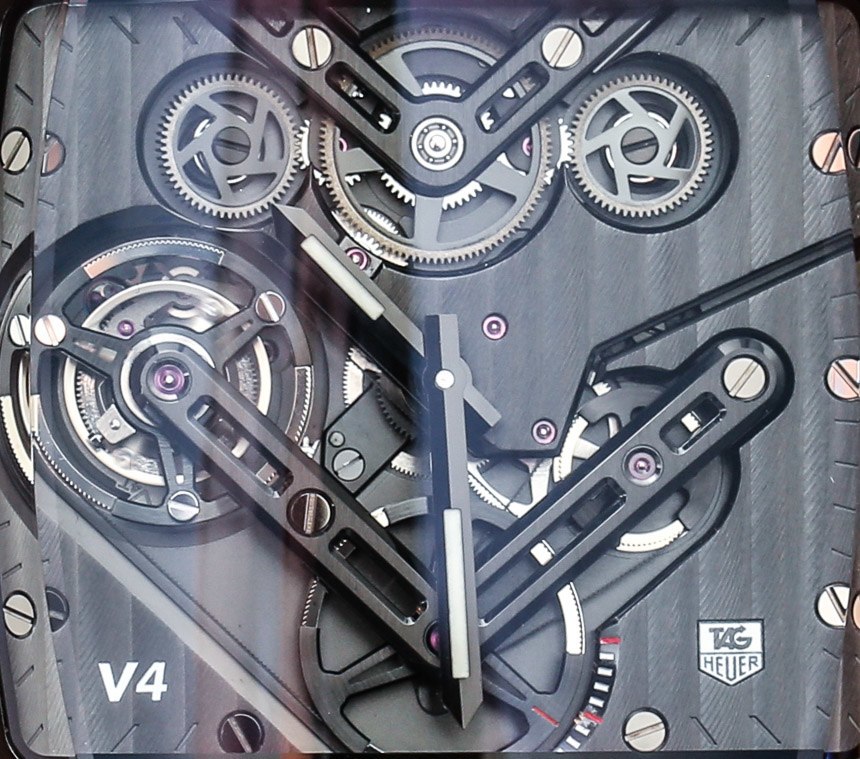 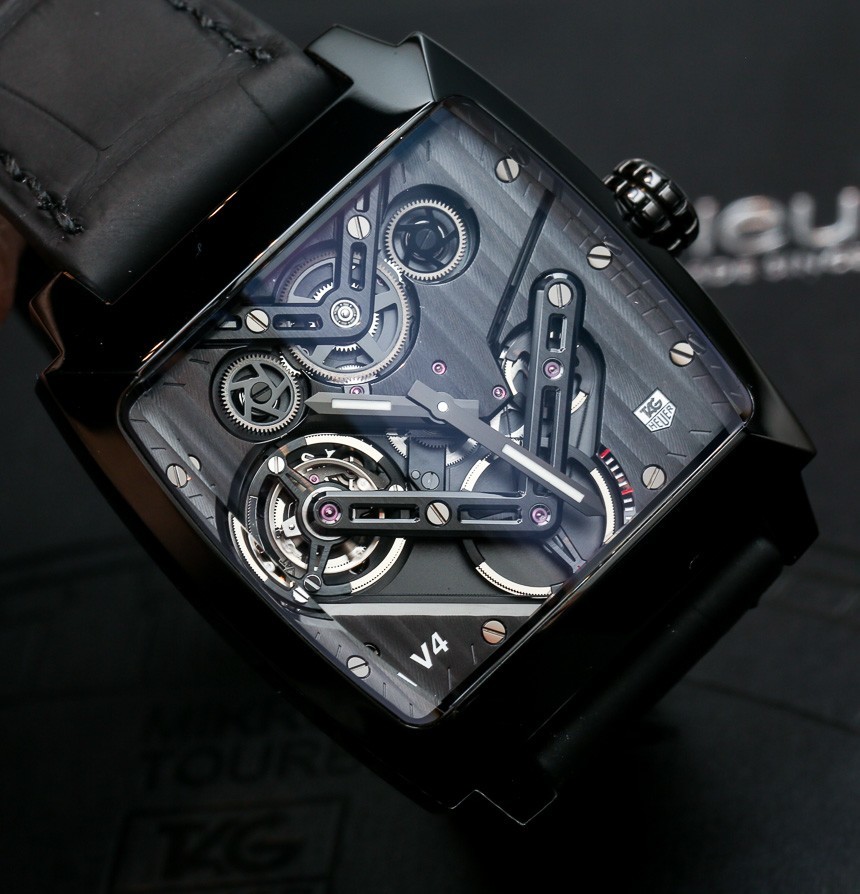 Unlike ultra-precise chronographs and exotic escapements that use magnets, the Monaco V4 was a rather straight forward proposition. The notion was to build a purely mechanical movement that looked like a car engine and that in some places would use belts as opposed to gears to transmit power. The development of the V4 also led to the development of the tiny belts that went into transmitting power. Much like car engine belts, they are rubber and metal reinforced, and just 0.07mm thin.

It goes without saying that many elements of the TAG Heuer Monaco V4 Tourbillon are patented by TAG Heuer. While it might look like the simple inclusion of a tourbillon in an existing movement, this is something totally new from the outgoing V4, even though they are still very much part of the same family. The movement is also an automatic and unlike most does not use a half-circle rotor. Instead, the TAG Heuer Monaco V4T movement uses a linear weight which acts to wind the four mainspring barrels as it moves back and forth.

TAG Heuer also mounts mainspring barrels as well as other elements of the movement using ball-bearings. The movement requires a lot of power and, despite the two pairs of mainsprings, has a power reserve of 40 hours. It further operates at a frequency of 4Hz (28,800 bph). 214 parts are included in the movement assembly.

In the above video, you’ll find me speaking with TAG Heuer CEO Stéphane Linder at Baselworld about a series of new TAG Heuer products including the TAG Heuer Monaco V4 Tourbillon. The one-minute tourbillon is placed in the same location as the more traditional balance wheel in the original Monaco V4. That means it might be difficult for some to notice at first glance there is something special here, but at least the dial design is a bit different.

I’ve always been a fan of the design of the Monaco V4 and the TAG Heuer Monaco V4 Tourbillon is no different. This watch continues to look effortlessly cool and modern, but also something you would not hesitate to show off to non-watch people. What does that mean? Well, there are certain technically amazing mechanical watches that look either too nerdy, or too avant-garde to appeal to “lay tastes.” Alternatively, there are some technically amazing watches that from the outside look like most other watches. With the TAG Heuer Monaco V4 Tourbillon one gets a smooth combination of attractive looks as well as an obviously intriguing mechanical engine inside. Basically what I am saying is that this is the nerdy tech-movement watch you can wear on a date. 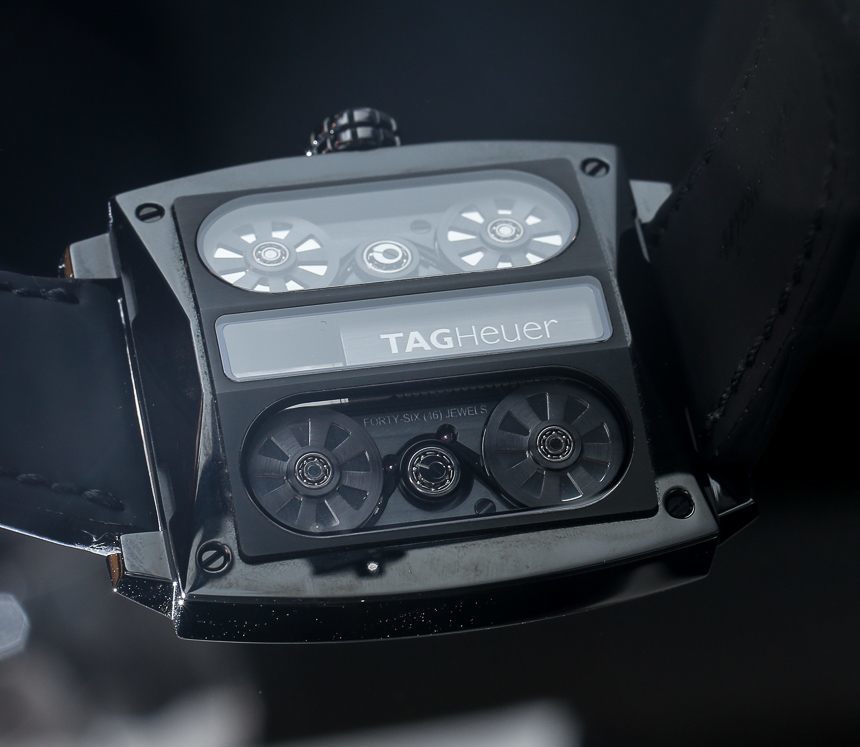 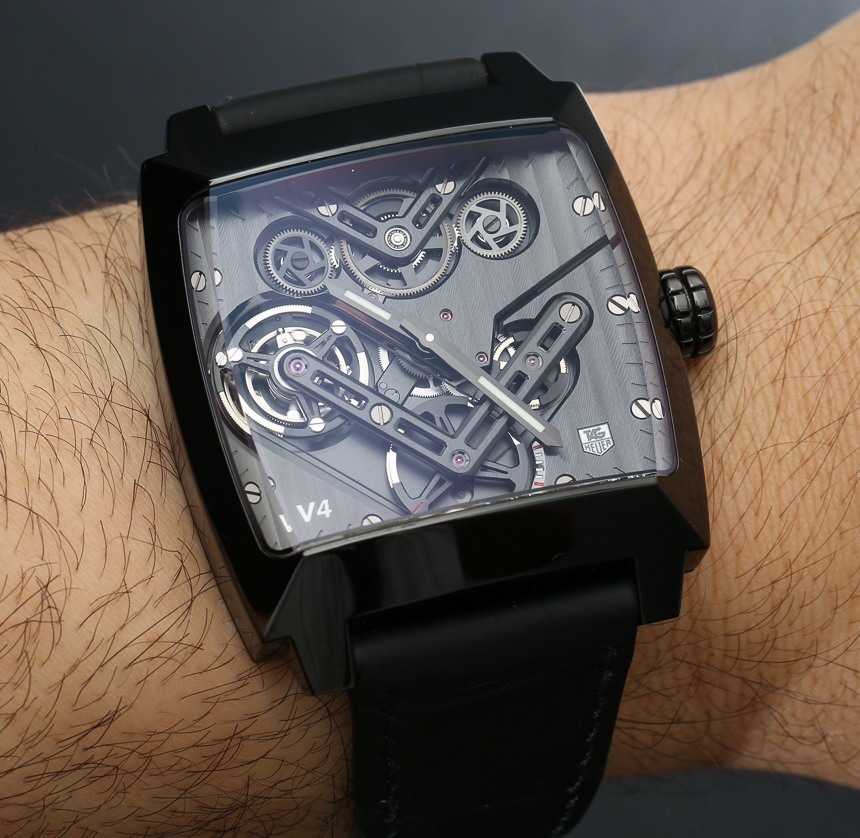 For this particular version of the Monaco V4, TAG Heuer has opted to once again go with a titanium case. The TAG Heuer Monaco V4 Tourbillon uses a square case slightly larger than the original, at 41mm wide. I believe that the original Monaco V4 came in a 39mm wide case. Personally, I love the shape of this case, and the black-coated titanium with its glossy finish makes it look like an Imperial ship out of Star Wars, or something that Darth Vader would wear.

Over the dial is a beveled sapphire crystal with AR coating and the case is water resistant to 50 meters. The slight cushion-shape of the case is what has helped the Monaco family watches look good on wrists for so many years. I mention this because, while I like the idea of square or rectangular watches, very few of them end up looking good on one’s wrist. 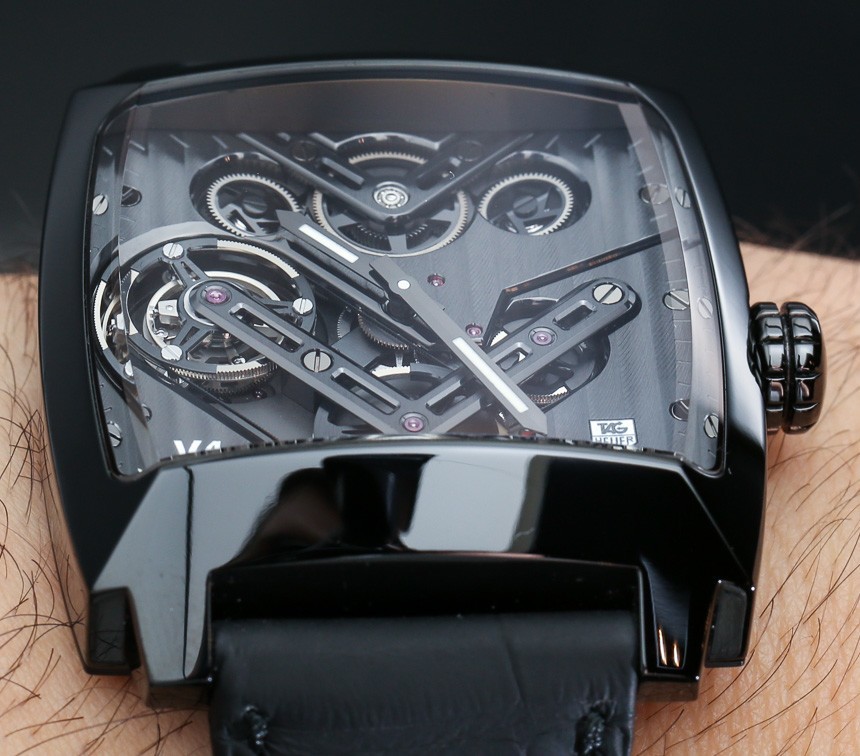