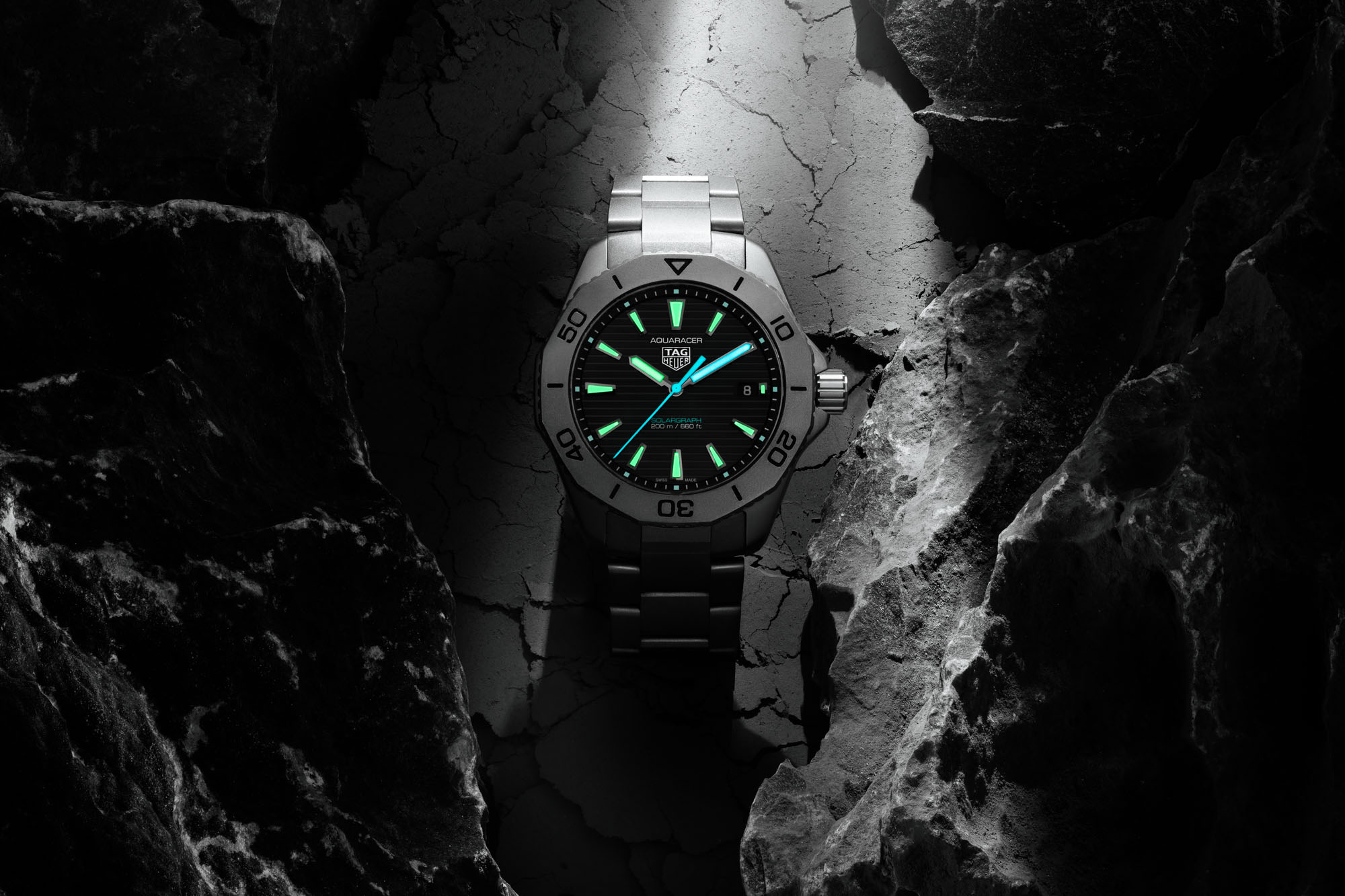 As part of its latest batch of new releases unveiled in Singapore at LVMH Watch Week, TAG Heuer has released a new titanium version of its Aquaracer Professional 200 Solargraph. Debuted last year at Watches & Wonders with a black DLC-coated stainless steel case paired with a rubber strap and luminous carbon bezel, the original TAG Heuer Aquaracer Professional 200 Solargraph brought a new level of autonomy to the brand’s go-anywhere outdoors sports watch. As TAG Heuer’s first-ever solar-powered timepiece, the original Solargraph was virtually destined to have a rather bold design, although it was only a matter of time before this light-powered movement would make its way into other models from the brand’s catalog. With a sand-blasted titanium case and matching bracelet, the new TAG Heuer Aquaracer Professional 200 Solargraph offers the same highly practical solar movement in a significantly more traditional overall aesthetic package. 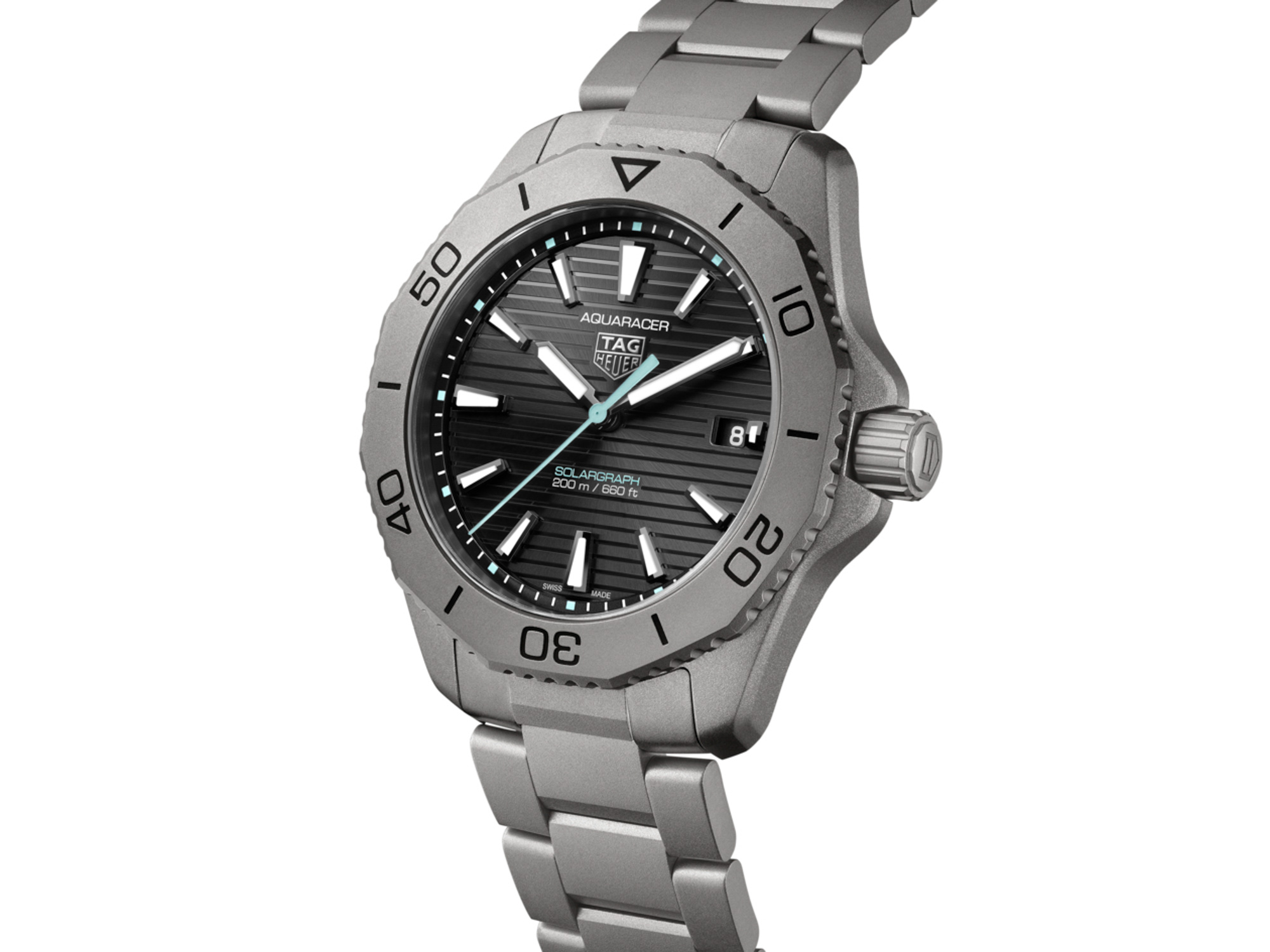 At a quick glance, the overall design of the new titanium version of the TAG Heuer Aquaracer Professional 200 Solargraph (ref. WBP1180.BF0000) will be immediately familiar to those that have prior experience with other models from the contemporary Aquaracer collection, with its angular take on a traditional dive watch style case. Measuring 40mm in diameter and offering the same signed-screw-down crown at 3 o’clock, flat sapphire crystal with double anti-reflective treatment, and solid screw-down caseback, everything about the overall shape and proportions of this new model is exactly what you would expect from a watch that is part of the current TAG Heuer Aquaracer lineup. 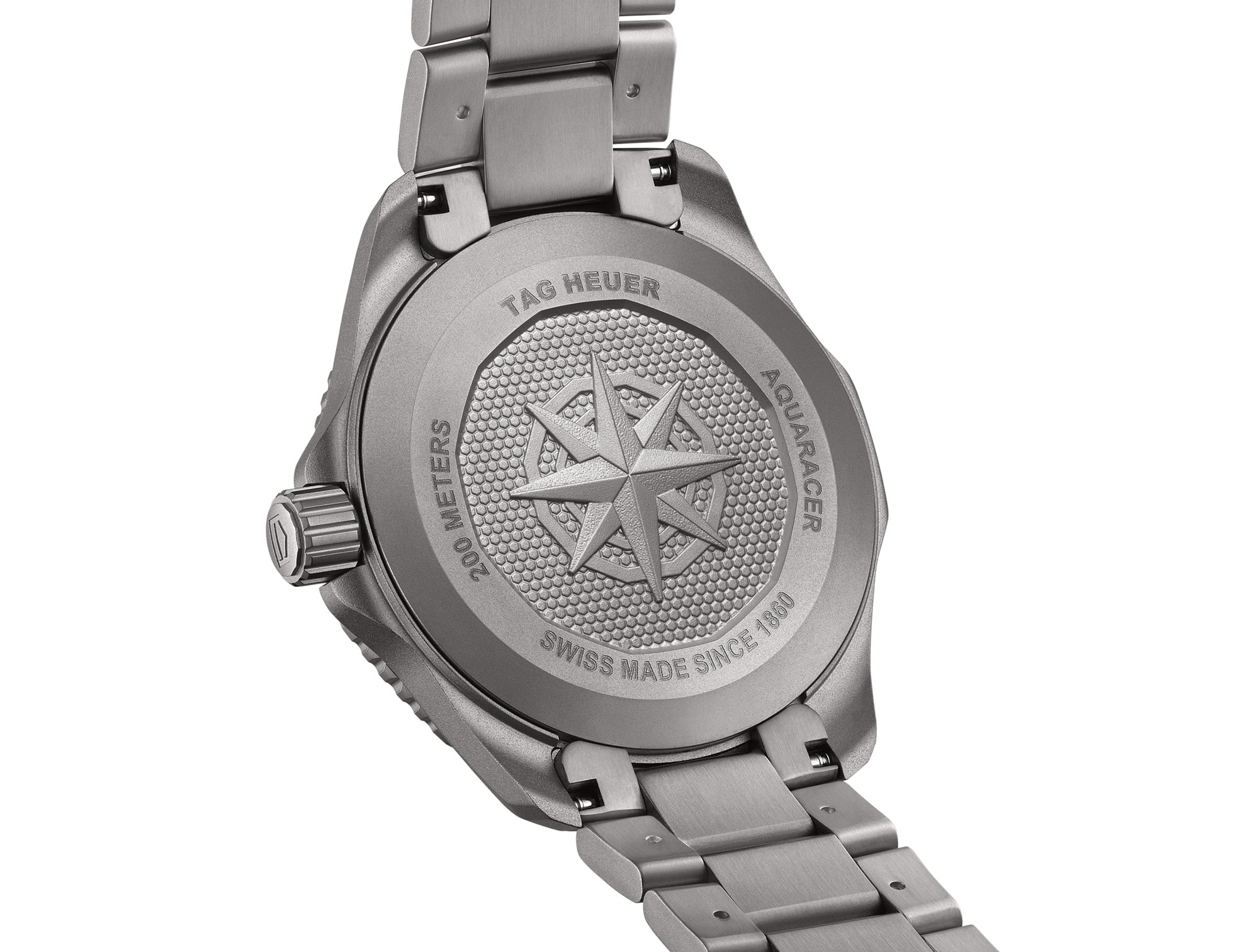 Even the bold twelve-sided rotating timing bezel has also been carried over from the other models from the series, although rather than being constructed from stainless steel components with brushed and polished surfaces, all of the external case parts on the new TAG Heuer Aquaracer Professional 200 Solargraph are crafted from sand-blasted grade 2 titanium. Just like its siblings (and implied by the “200” in its name), the new titanium version of the Aquaracer Solargraph offers users an ample 200 meters of water resistance, making it perfectly capable of being the care-free outdoor adventure watch that TAG Heuer intends it to be. 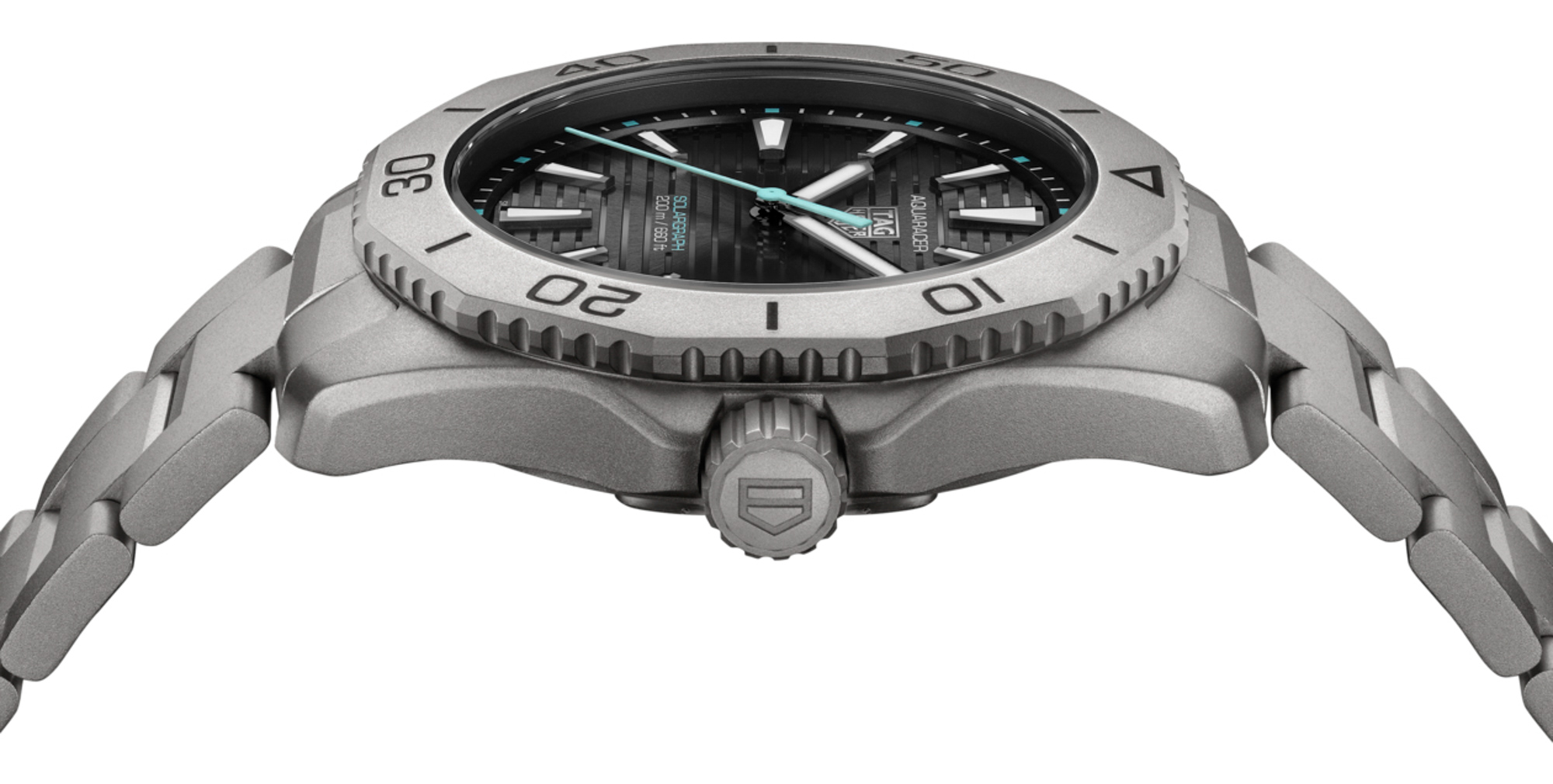 Despite having a significantly different external construction than the inaugural Solargraph model, the dial and hands fitted to the new titanium version appear to be virtually identical. Set against a semi-translucent black sunray surface with horizontal lines are applied black-finished indexes that are filled with white Super-LumiNova. Like other solar-powered watches, the semi-translucent surface is a necessary feature in order to allow light to reach the solar panels that reside below it. Surrounding the dial is a chapter ring that contains a white printed minute track, along with small polar blue squares to denote the five-minute markers. Just as before, the “Solargraph” name appears above the depth rating in matching ice blue letters, while a date window sits at the 3 o’clock location. 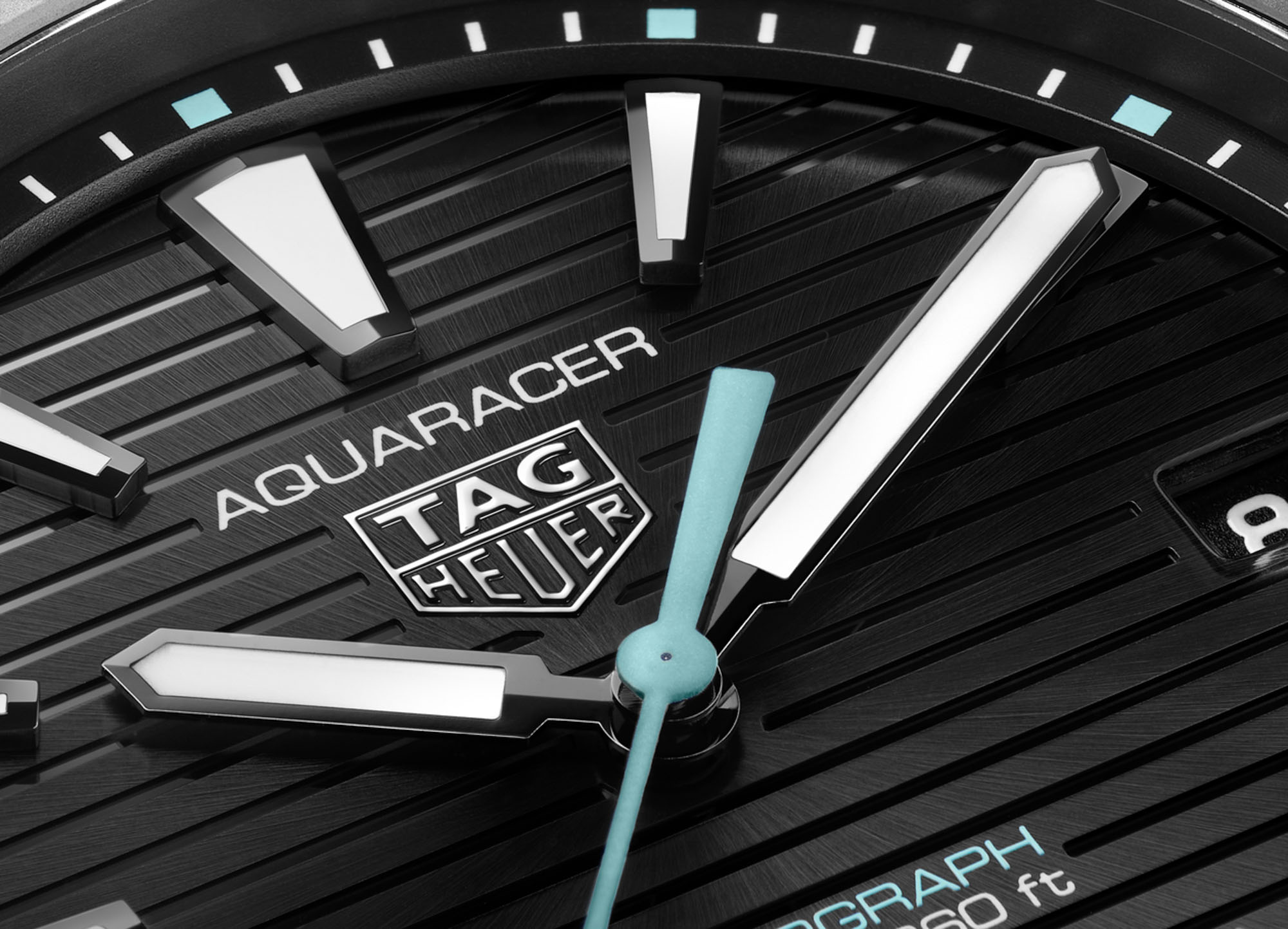 Similar to the dial, the hands also appear to be carried over from the original Solargraph model, and sitting at the center of the dial of the new titanium TAG Heuer Aquaracer Professional 200 Solargraph are black-finished hour and minute hands that are filled with white Super-LumiNova paired with a polar-blue lacquered seconds hand to match the rest of the dial accents. While the hour hand and markers on the dial all glow green, the minute hand glows blue for added contrast in the dark. As far as I can tell from the initial press photos, the dial and hands appear to be the exact same on the new titanium version of the Aquaracer Solargraph, meaning that this update is largely focused on the case and bracelet of the watch, which both represent significant departures from the original version of the Solargraph that was unveiled last year. 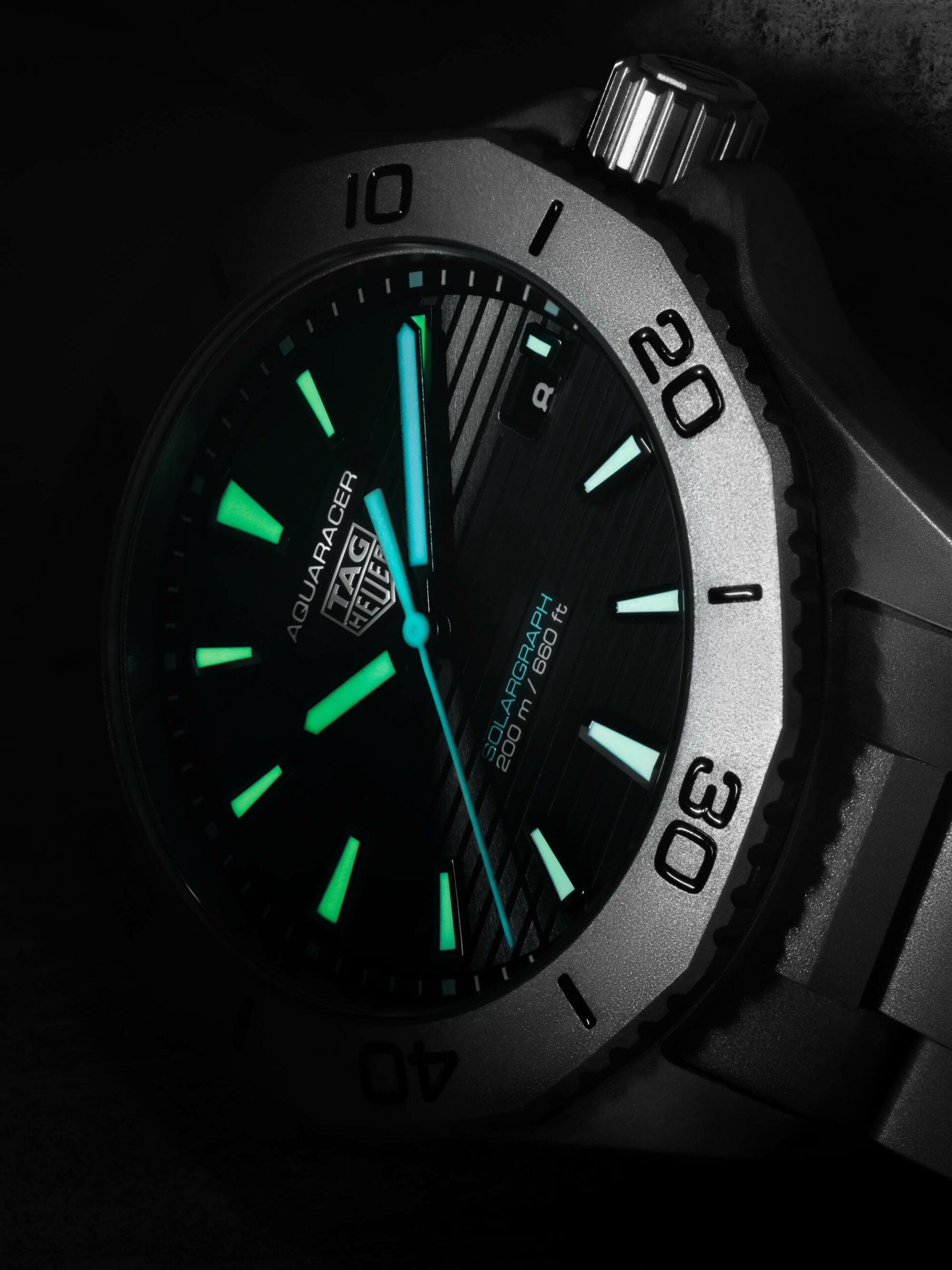 To match its case and bezel, the new titanium version of the TAG Heuer Aquaracer Professional 200 Solargraph is fitted with a matching bracelet made from sand-blasted grade 2 titanium. Featuring entirely matte surfaces and a fairly standard, flat three-link design, the titanium bracelet fitted to the new Solargraph is fitted with a folding clasp that features a double push-button release and an integrated extension system. While the overall lines of the case and bracelet are virtually identical to the stainless steel version of the TAG Heuer Aquaracer, the fact that the new Solargraph features entirely sand-blasted surfaces give it a noticeably more tool-oriented overall appearance. 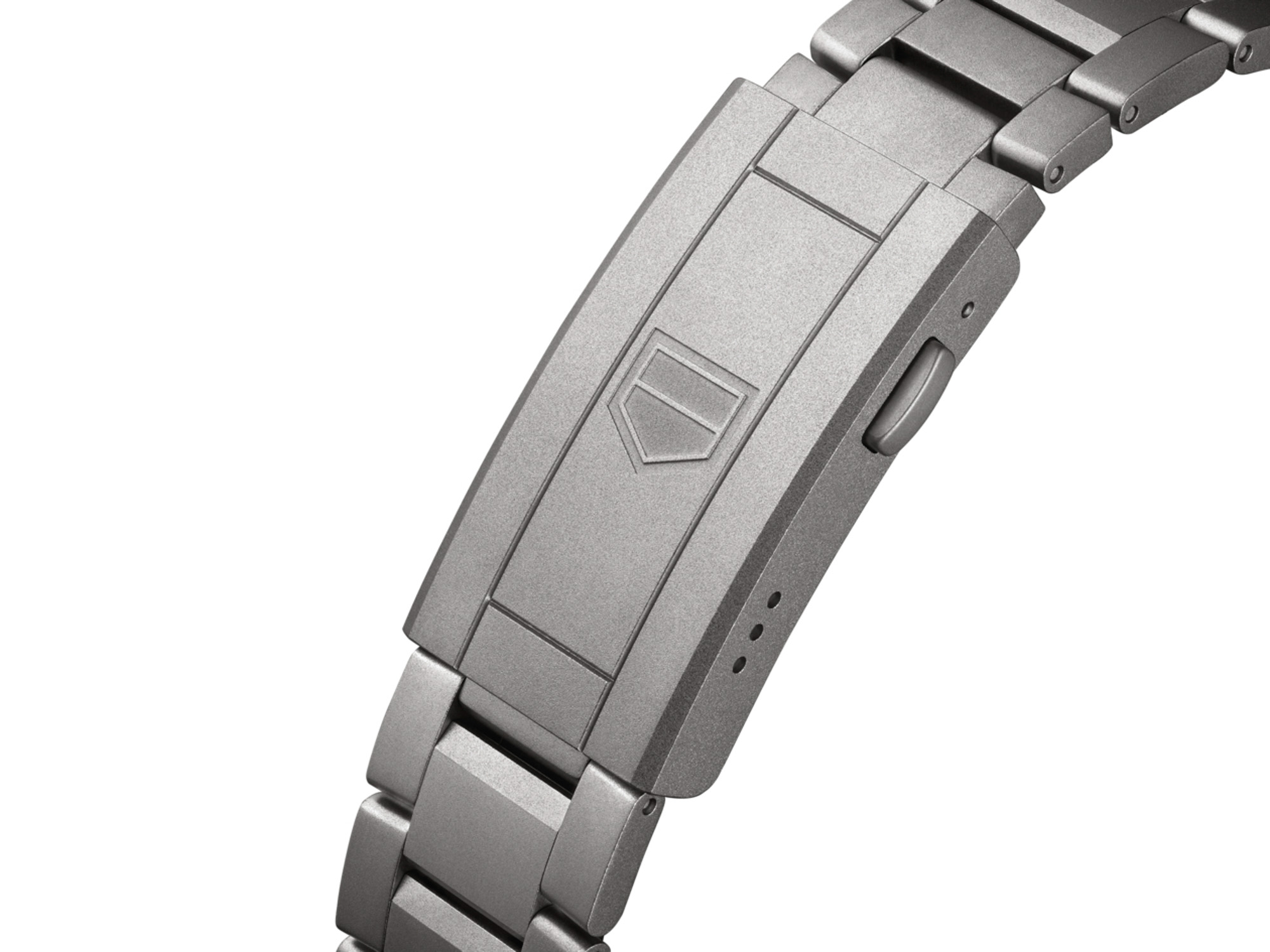 While the case of the watch has seen a significant update, the movement powering the new titanium TAG Heuer Aquaracer Professional 200 Solargraph is the exact same, and driving the trio of centrally-mounted hands (plus the date display) is the brand’s Caliber TH50-00 solar-powered quartz movement. Produced exclusively for TAG Heuer and developed and manufactured in partnership with La Joux-Perret, the Caliber TH50-00 can charge itself with either the sun or artificial light. Two minutes of direct sunlight exposure are enough to power the watch for an entire day, and less than 20 hours in the sun will fully charge the watch, which will allow it to run for up to six months in complete darkness. 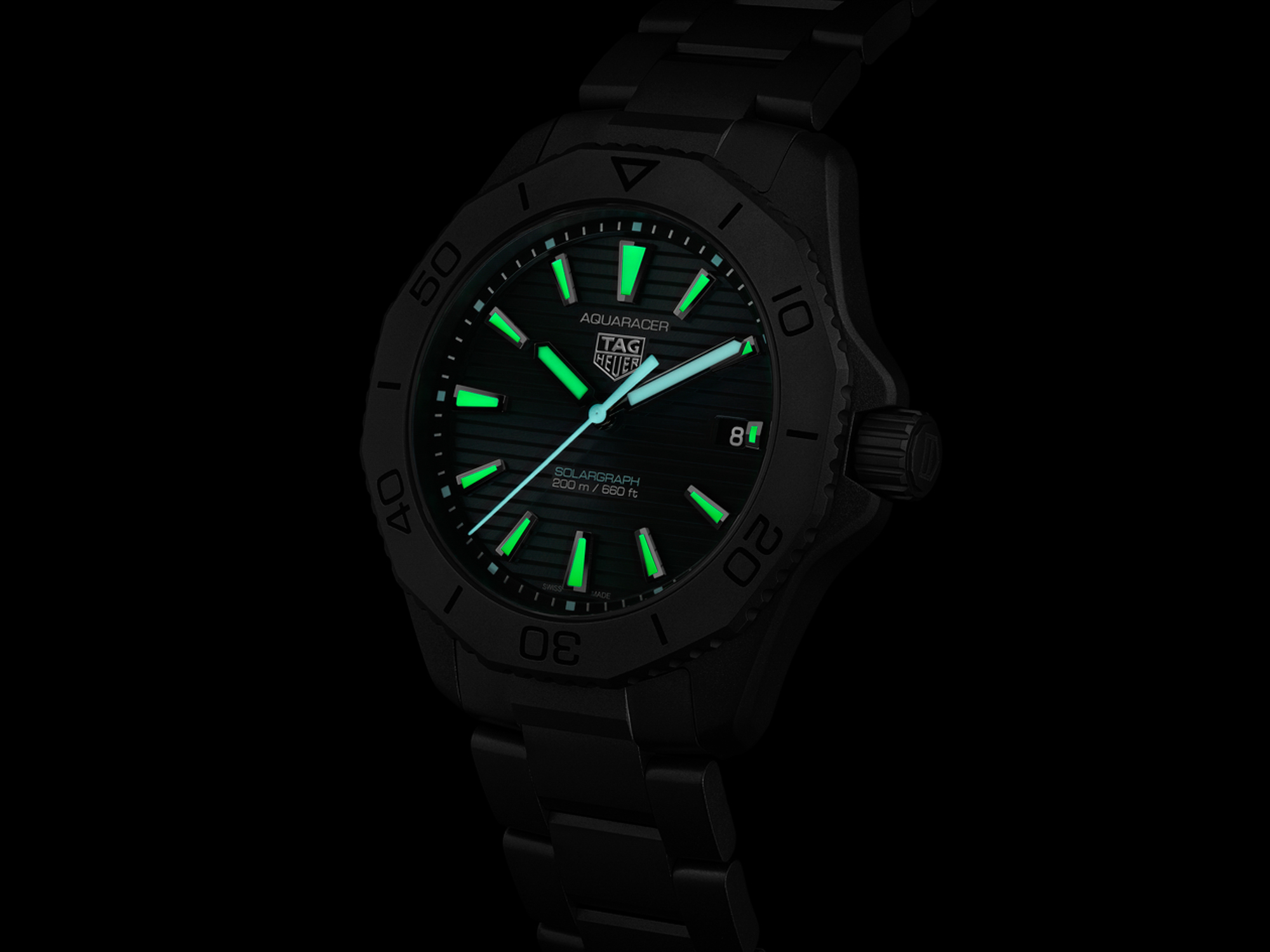 Given that La Joux-Perret is owned by Citizen, it is highly likely that the TAG Heuer Caliber TH50-00 is (at least on some level) based upon Citizen’s Eco-Drive technology. While some may say that this makes it essentially just a fancy Swiss-made version of an Eco-Drive movement, that isn’t necessarily a bad thing. Citizen is an industry leader when it comes to solar-powered watch movements, and having La Joux-Perret make a movement with underlying Eco-Drive technology is ultimately going to yield a far better product than if TAG Heuer were to try to make its very own in-house solar caliber. In this instance, it was probably decided that there was no need to completely reinvent the wheel, especially when the current “wheel” is a very good one that is currently regarded as one of the very best in the industry. 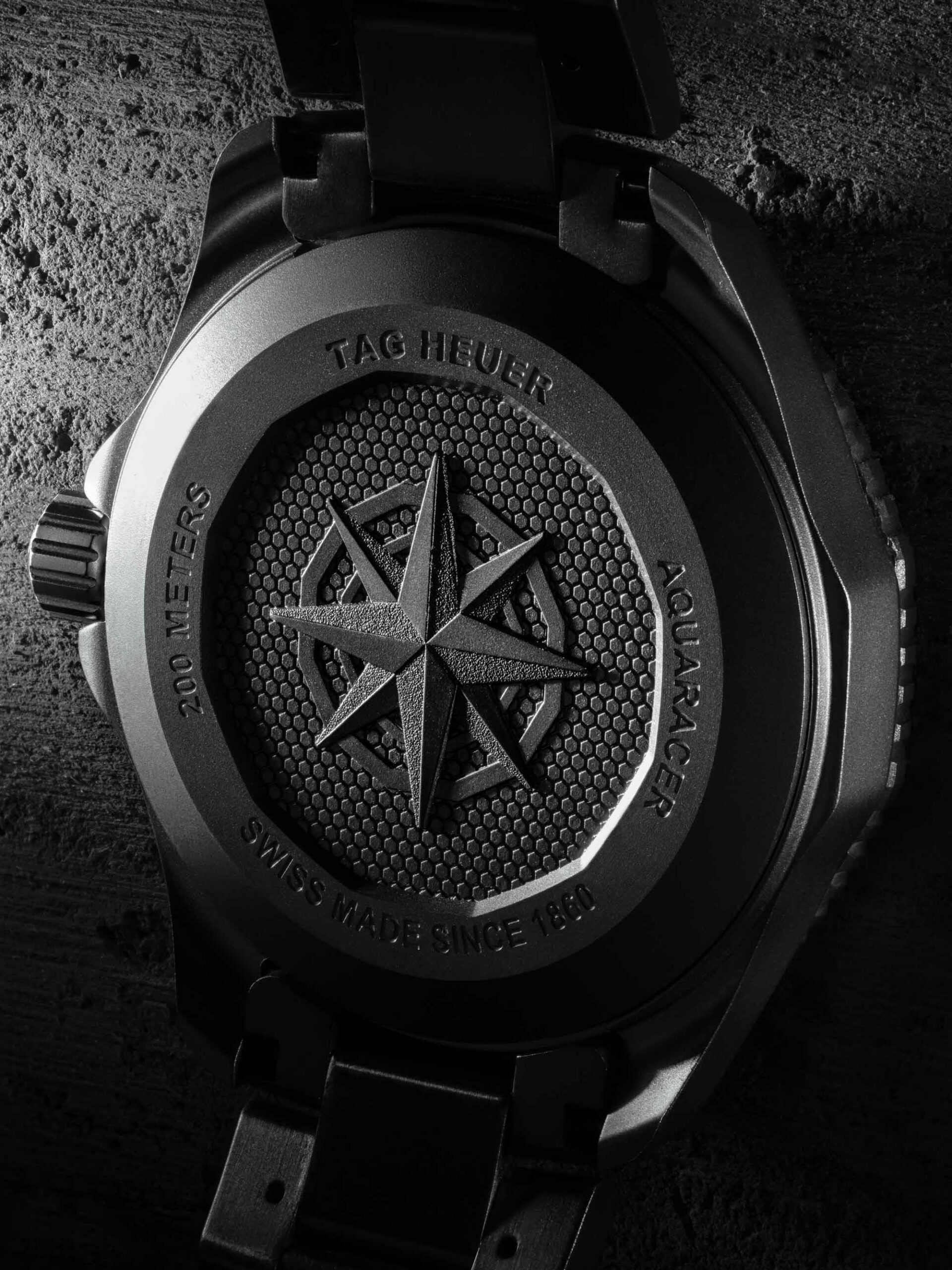 Some people object to quartz watches simply because they don’t offer quite the same romanticism as a traditional mechanical timepiece that consists of dozens (or hundreds) of small metal components working together in perfect harmony and without any intervention from electricity whatsoever. However, many other collectors have reservations that have to do with the perceived lack of autonomy that accompanies a watch that will inevitably require its case be opened up every several years for a routine battery replacement. Due to the laws of physics and current limitations in regard to manufacturing materials, no existing watch will be able to run indefinitely without ever needing intervention at some point in time, although a solar-powered movement guarantees you significantly longer intervals of autonomy compared to a traditional battery-powered timepiece, all while offering the same durability and grab-and-go convenience of quartz timekeeping technology. 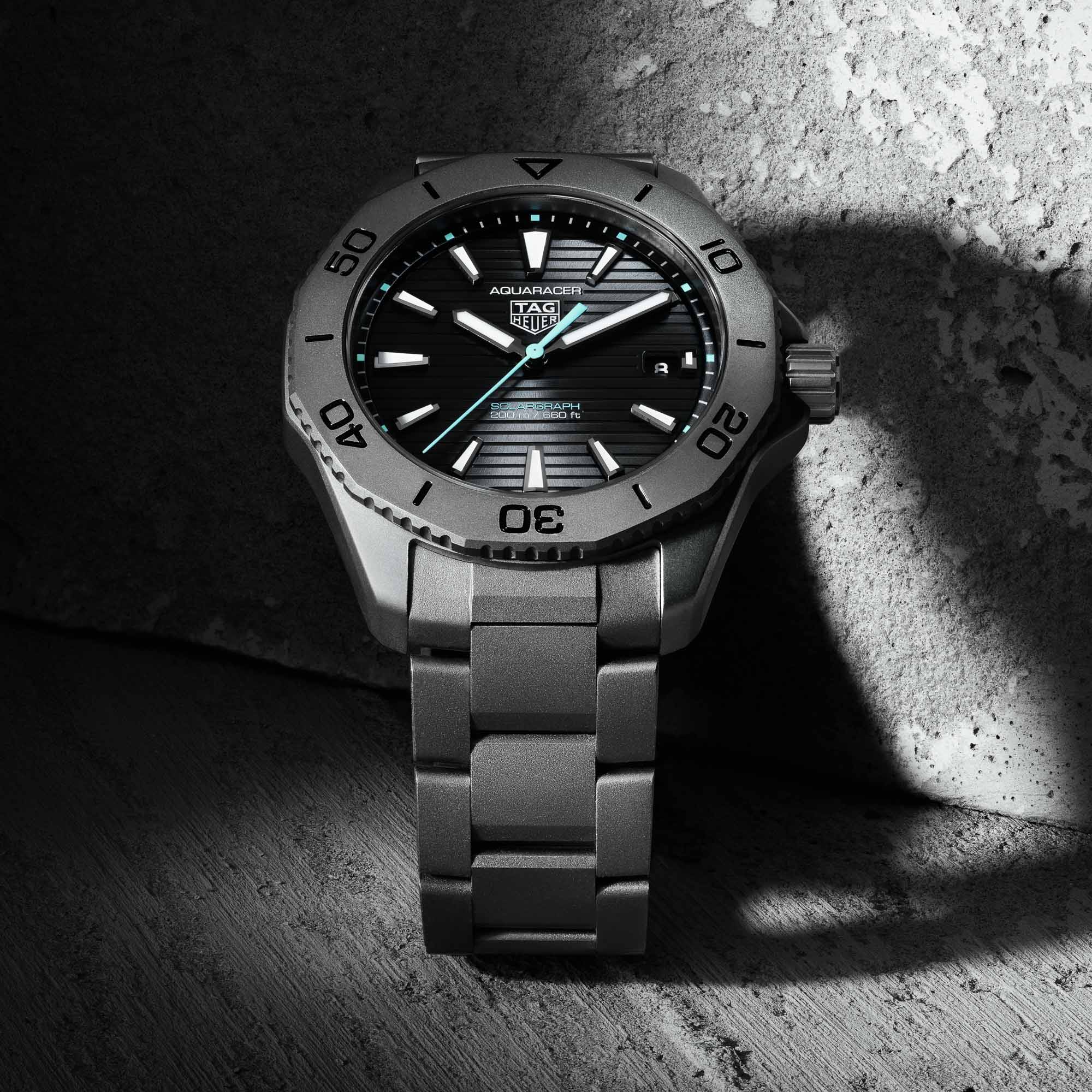 When it comes to pricing, the new titanium version of the TAG Heuer Aquaracer Professional 200 Solargraph costs the exact same as what the brand now charges for the inaugural Solargraph model that debuted last year, and it is accompanied by an official retail price of $3,050 USD. Despite the fact that it doesn’t have the luminous carbon bezel insert of its predecessor, I’m slightly surprised to see that the new version doesn’t cost more than the original model due to the use of titanium for its case, along with the fact that it is also now fitted with a matching titanium bracelet. At the same time, this also feels a bit expensive considering that the new titanium Solargraph costs slightly more than the stainless steel Aquaracer that is powered by an automatic movement. That said, for those who liked the utility of the standard quartz Aquaracer but didn’t necessarily want to have to deal with routine battery replacements, the new titanium version of the Solargraph offers much of the same overall aesthetic but with a lightweight and rugged twist and significantly increased autonomy. For more information, please visit the brand’s website.