TechnoMarine Watches Back On The Block 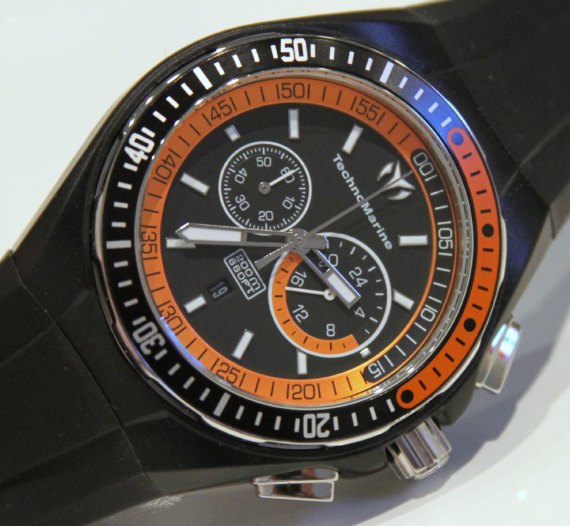 The build up was intense. Months of teasers and speculation to see what new CEO of TechnoMarine Vincent Perriard would do to the brand that desperately needed a refresh. At the same time, Perriard only had a few months because he was new to the brand – fresh out of his seat at Concord. His task was to release new watches for Baselworld 2010 to be interesting enough for people to notice the brand again. Not an easy task, especially given the molasses like pace of the watch industry. The middle of March was the proving ground – would the new collection have enough appeal to convince enough people the brand was  worth paying attention to again.

In the 1990s TechnoMarine was a big deal because it was another “mold breaking” brand. I’ve discussed this before, but I will again because I think it is important. TechnoMarine opened the doors to modern luxury sport watches. Not that they themselves were super high-end, but the brand revolutionized the concept of who wears sport watches, and when they can be worn. Mixing plastic with diamonds was an odd thing back then. In fact, for most people it still is. But the concept worked. The watches looked like blinged-out Casio G-Shock watches with analog hands, and they worked. The industry stole the concept to a degree and overshadowed TechnoMarine a few years later with lots more, much expensive or unique pieces. To a large degree, I think you can credit TechnoMarine with making it acceptable to offer (and buy), the legions of gold watches with rubber and/or diamonds. Plastic was simply an interim material, making way for all sorts of exotic sporty materials that you’d never traditionally think of pairing with luxury watches. 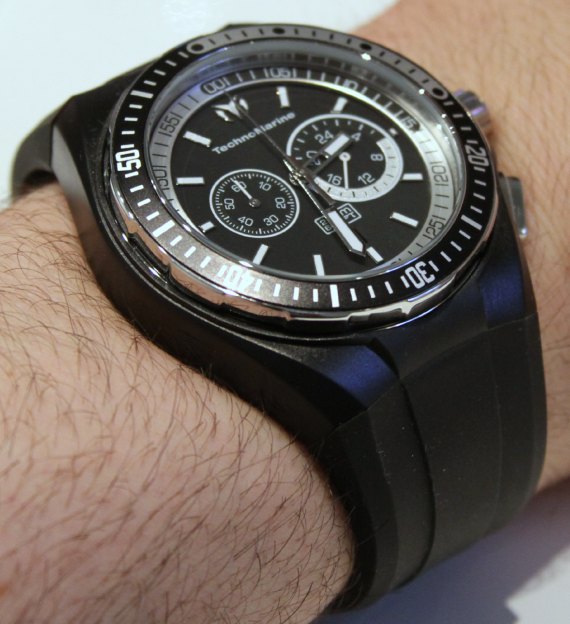 While TechnoMarine hasn’t really gone anywhere, they certainly didn’t grow too much in popularity. For 2010 their idea is to change all that. Have they succeeded? Well they are off to a good start. They also have a killer advertising campaign and messaging plan that I think will be excellent for the brand. Just wait until you see their ads soon. For Perriard, the most important of the new collection is the new TechnoMarine Cruise Sport line. I initially wrote about it here on AskMen.com. This is the major mainstream collection that he is going to be focusing on. A 40mm wide and 45mm wide model selection with and without a chronograph. Priced at about $400 and under, this is a watch made for the masses. 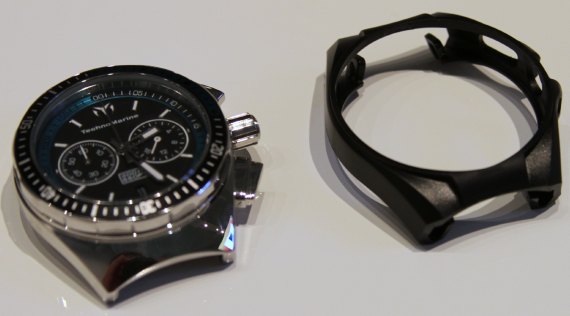 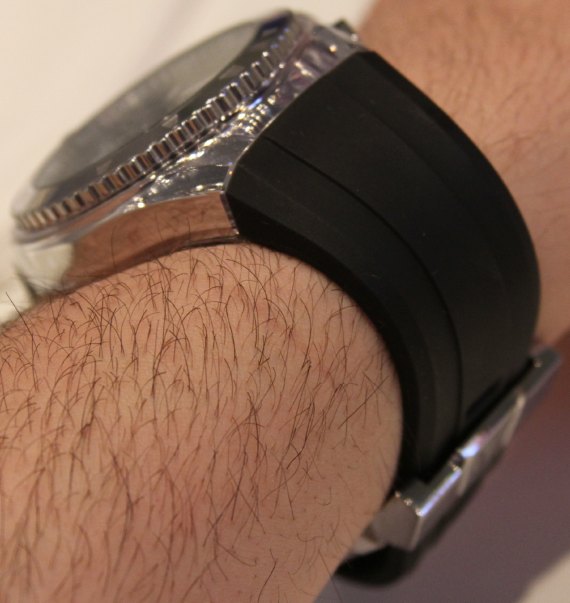 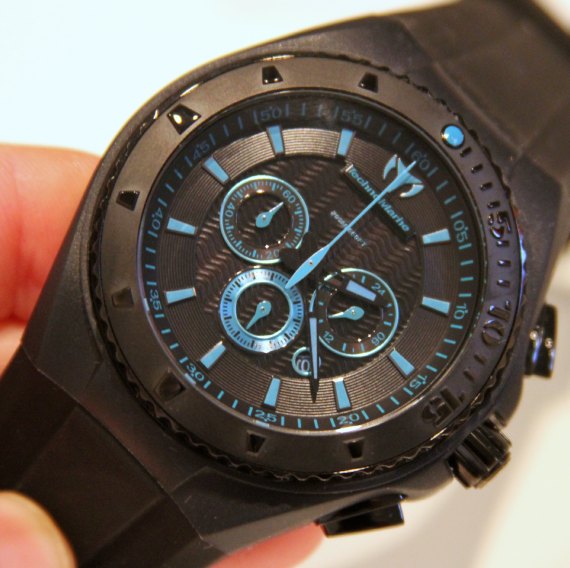 What is interesting is that Perriard’s last stint was at Concord. There he helped construct the revitalization of the brand as well as the C1 collection. A watch line that I did not like. Perriard and I had some interesting discussion about it, but it was all mute once he left Concord. From ultra high-end to high volume, he has totally changed his pace by moving to TechnoMarine. I finally got to meet with Vincent last month. A charismatic guy, I feel bad for Concord having lost him. He understands marketing and hype. I think he will do a good job pushing the new TechnoMarine message with a line of watches that won’t break the bank. He thinks in color, and it shows in the models. Each feels like candy that isn’t too sweet. Meaning the designs satisfy, but not in a way that will burden your eyes after prolonged exposure.

One of the interesting things about the new TechnoMarine watches is the refinement of the “sheath idea.” Earlier TechnoMarine watches has plastic over metal cases. You could actually remove the sheath/cover and replace them with others. But it was a pain in the ass. The concept was great though, and the new watches have refined this idea. Basically, you can quickly remove the mostly silicone straps, which allows you to remove the cover over the case. Underneath is polished steel. You then have different colors (even a clear sheath) to put over the watch, and you have lots of different strap colors. In fact, each new Cruise Sport watch comes with two straps. I played with the straps and sheaths personally. I have to admit that switching them around is pretty simple. 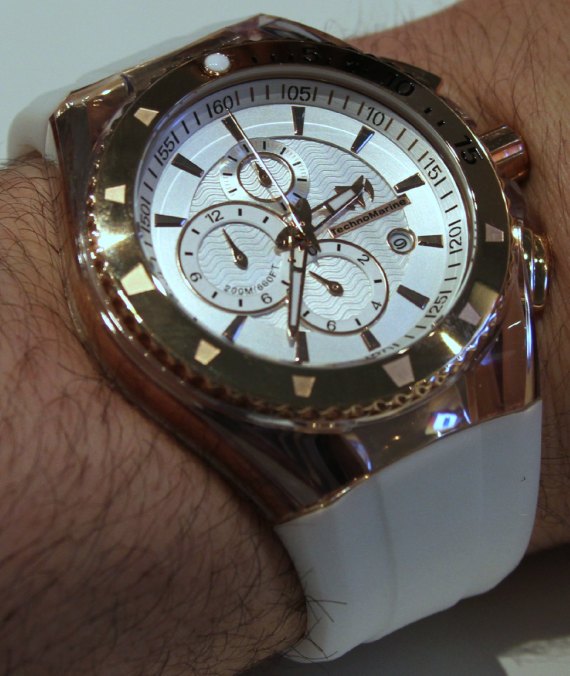 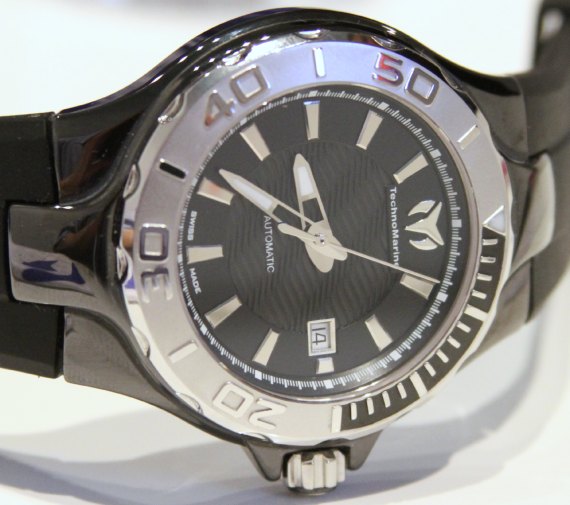 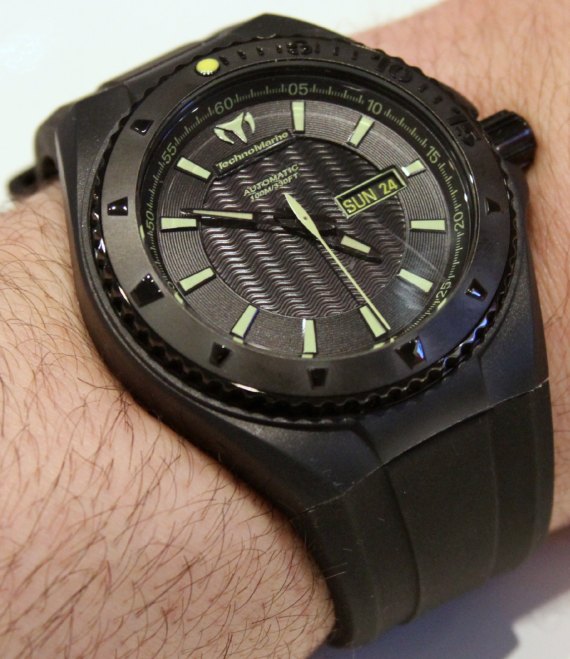 The Cruise Sport is comfortable and looks pretty good. It isn’t the most beautiful or awesome watch in the world, but for the price point, it does offer more refined style than that a lot of what is out there. The pieces are also durable, and will likely survive some harsh treatment. Available with a few dial colors as well, it will likely be a solid seller.

Inside the Cruise Sport, and much of the new TechnoMarine line are Citizen Miyota movements. Though there are Swiss movements in other TechnoMarine timepiece. There is a combination of quartz movements, as well as few mechanical ones. TechnoMarine chose Japanese movements because of their price mixed with durability. With them, they can offer the watches at more reasonable rates. Other than the Cruise Sport there are some other new models. There might be a few images of existing models in here though – but they are mostly new to me. I actually don’t know the name of most of these other models. Each of them has the sheath over metal style case, expect for the ceramic model, a nicer and more expensive part of the TechnoMarine collection. I actually quite like that piece.

The pieces you see here are a sign of what is to come for TechnoMarine. Perriard promises a much more substantial collection for Baselworld 2011. I am interested to see what TechnoMarine will release then after more than a year with the CEO, and the new direction. So what do you think? Can you see a TechnoMarine Cruise Sport on you?