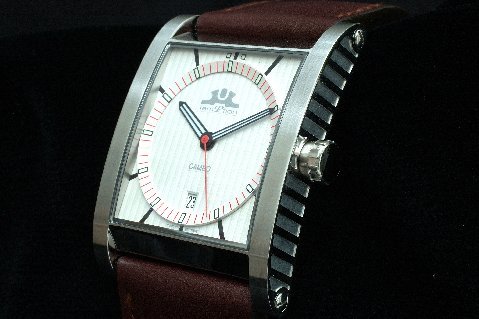 Temption watches will present a twist on the still new Cameo model at Baselworld this year. The new model is called the Cameo S (for silver) and has the popular new Cameo watch with a revised face. The dial is silver colored with different hands and some red minute markers to add color to the face. Further, the watch will offer some light vertical texturing on the dial to match the sides of the watch case, and a onyx rather than tiger’s eye cabochon in the crown. Like the standard Cameo watch line, the Cameo S will be introduced as a limited edition of just 500 watches.

The rest of the Cameo S model will be the same as the regular Cameo watch. This includes the architecturally themed square case unique to Temption with an ETA 2892A2 automatic movement powering the watch. Temption is proud of the special technique they use to chemically bond the square sapphire crystal to the case. This process is very difficult to do because the Cameo is of the only square watches with a true square sapphire crystal. The stainless steel case is beautifully cut in a high polish and brushed finish, with some satin finished segments on the side.

As I write this I am wearing my Temption Cameo watch and can say the both dial choices are beautiful and highly legible. I anticipate that pricing will be competitive at under $2,000 which is a good value from the boutique German watch maker who produces well under 1000 watches each year. The Cameo Silver watch will be announced officially at Baselworld later this month and available sometime after that.