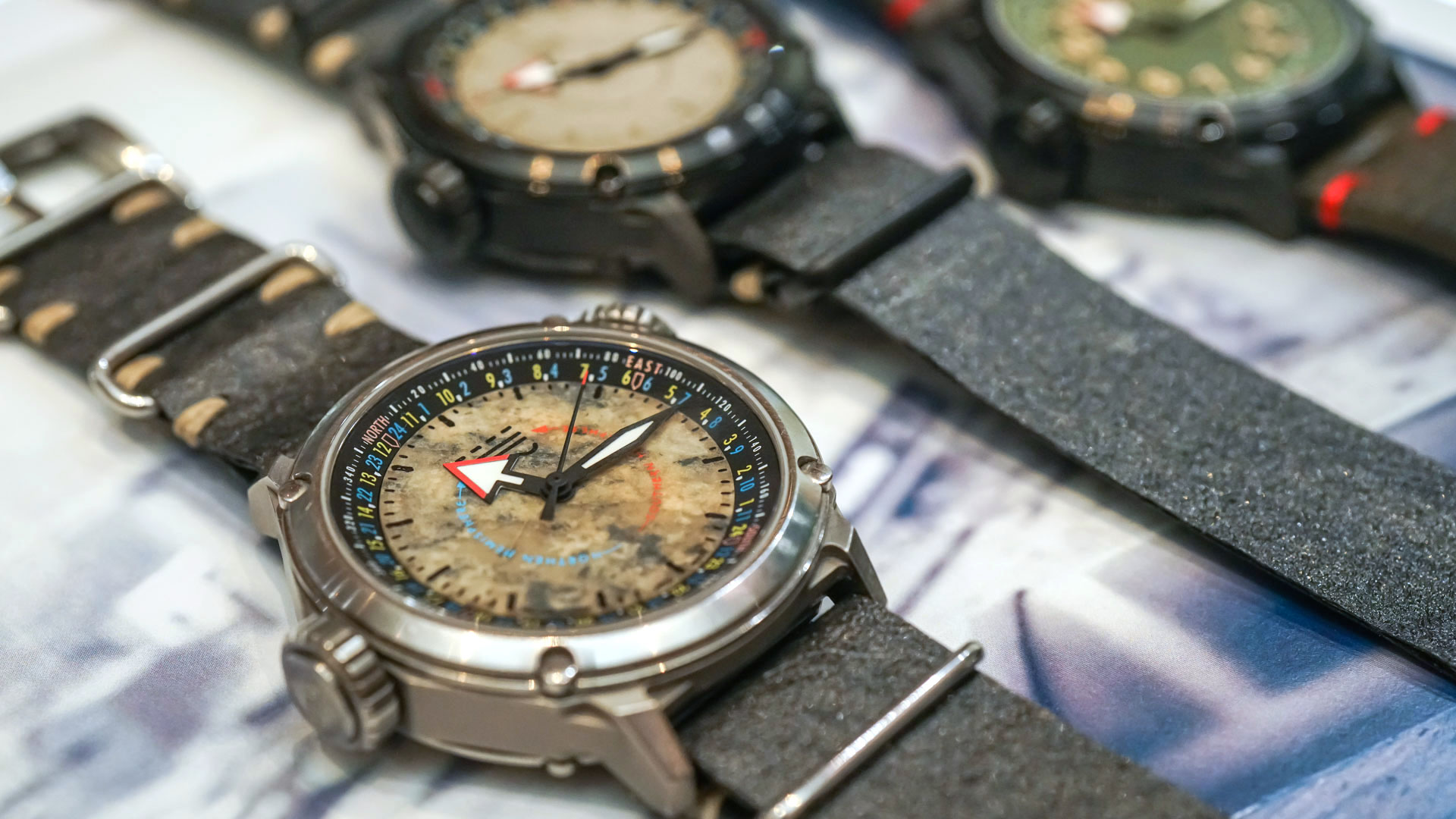 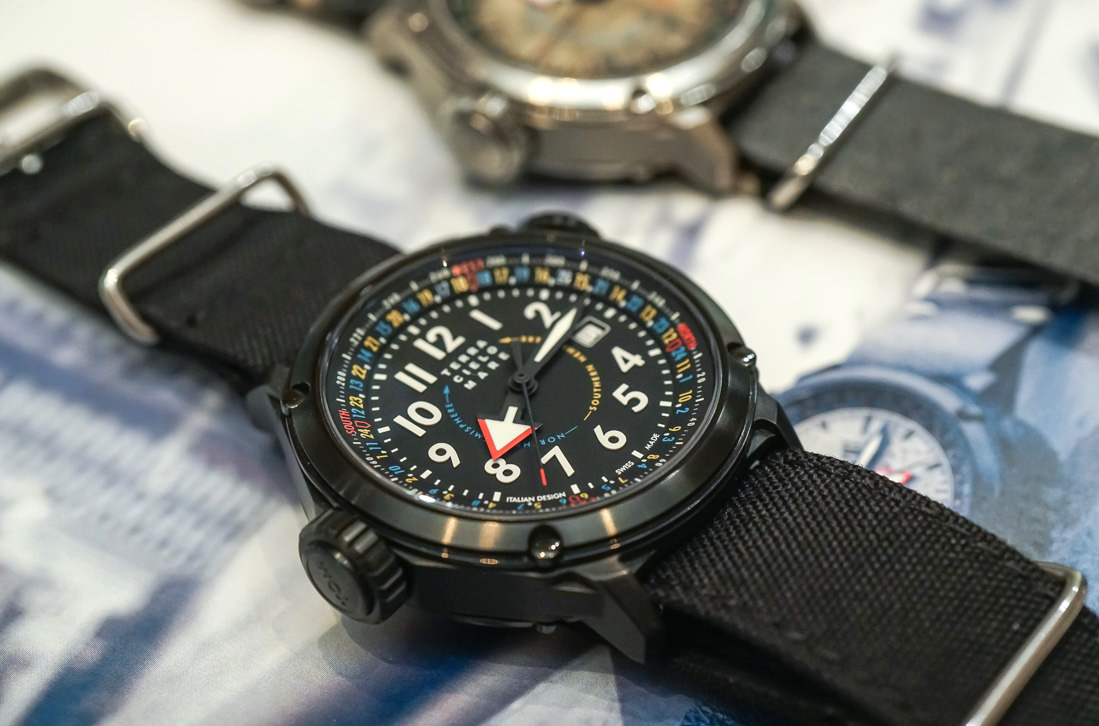 World War Z wasn’t a particularly excellent film (just ask any fans of the novel), but for eagle-eyed watch-spotters, there’s a bit of neat trivia behind the watch worn by its protagonist Brad Pitt. As one of Hollywood’s highest-paid actors, Pitt certainly could have had his pick of the litter when it came to luxury watch brands, but a savvy costume designer on the prowl in Italy for a capable, but under-the-radar watch led to Italian independent Terra Cielo Mare making its big-screen debut with the Orienteering model on Pitt’s wrist in the film. 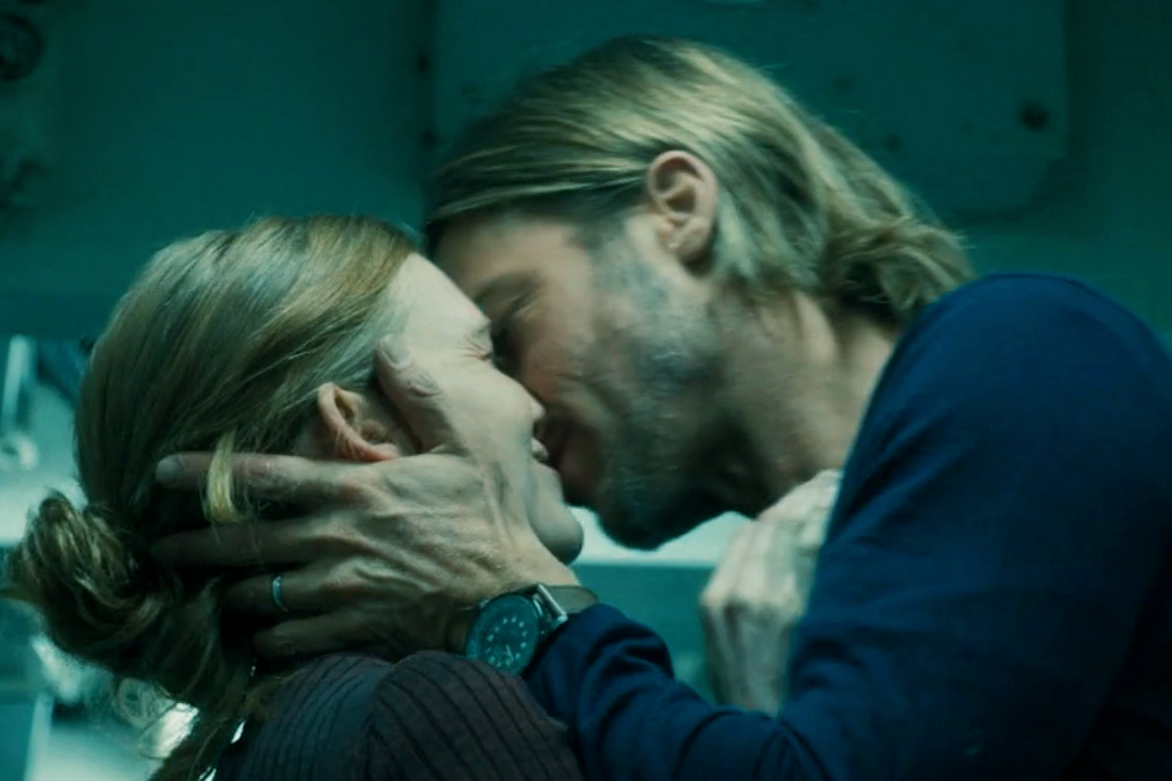 Terra Cielo Mare (‘earth, air, water’ for those brushing up on their Italian) CEO and fourth generation watchmaker Luca Fontana admits that landing his brand in World War Z was a bit of a happy accident, but the fact remains that the Orienteering feels very much as though it could be an excellent selection in the event of a zombie apocalypse, thanks to high marks for legibility, no batteries required to keep its ETA 2824 automatic movement running, and a handy solar compass on the inner rotating bezel to serve as a rudimentary navigational aid in a pinch. 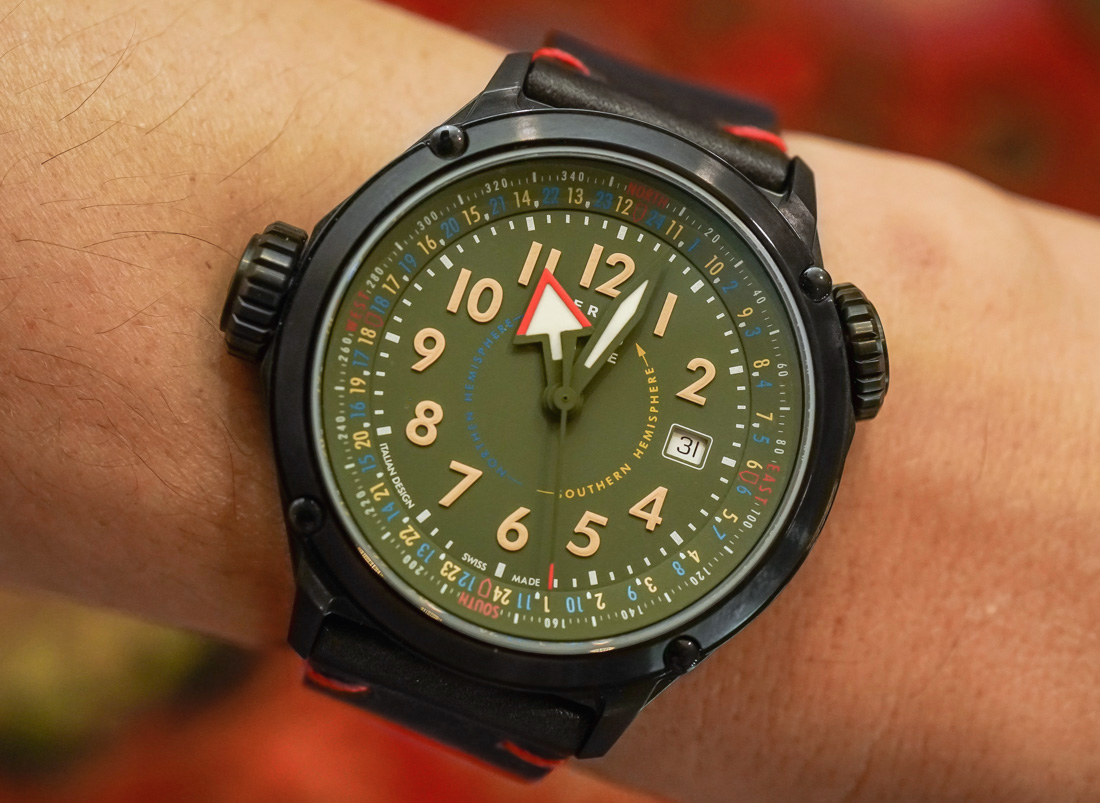 All images by Zach Pina 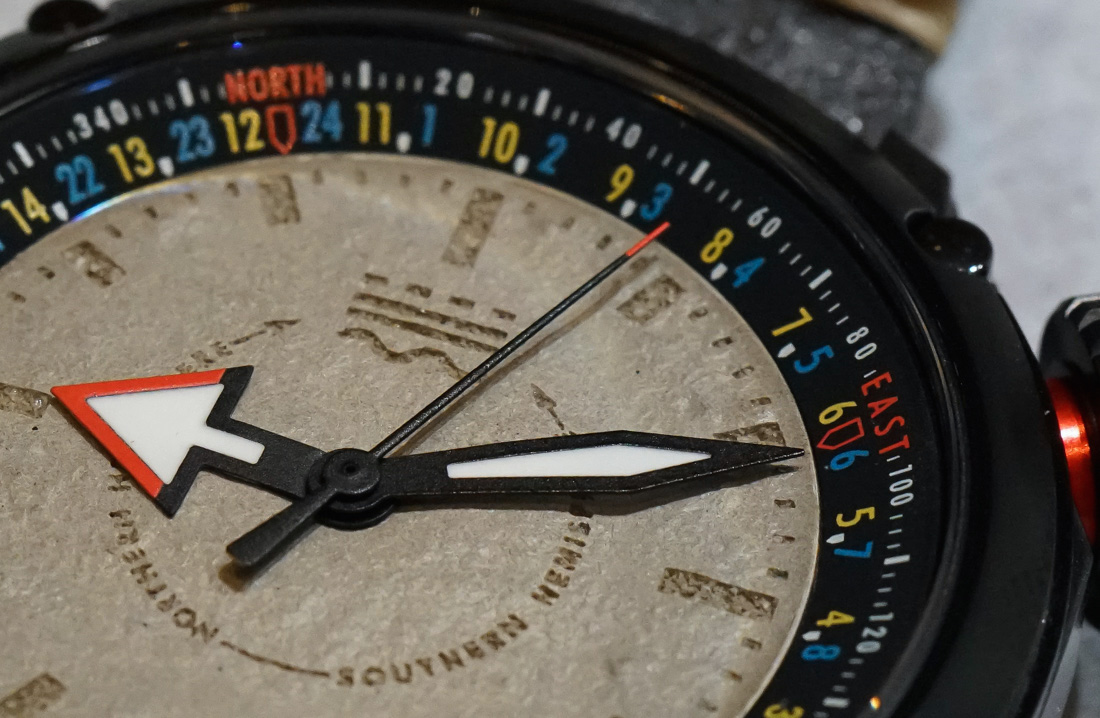 But there’s a bit more to this watch beyond the fact that for nearly twenty years, TCM has been quietly and consistently making a small number of excellent watches inspired by the exploits of those serving in Italy’s three branches of armed forces. Terra Cielo Mare is, in fact, the house brand owned and managed by a venerable family-owned case and bracelet manufacturer, whose clients are reportedly among some of the industry’s heaviest hitters. How heavy? Let’s just say the case and bracelet belonging to one of the most iconic and desired sports watches on the market today aren’t manufactured by that brand in-house. Granted, the folks at TCM were unsurprisingly tight-lipped about addressing the rumor, so consider this an officially unconfirmed open secret for now. 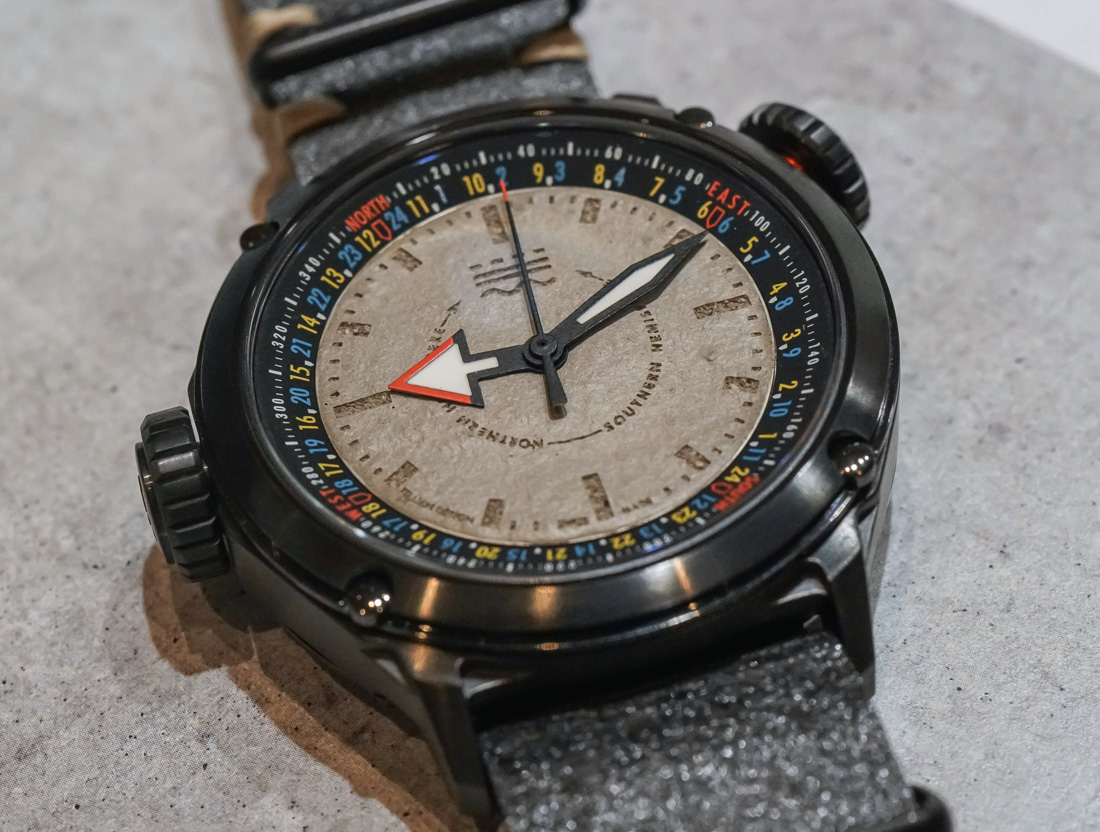 Now, it’s a bit of insider baseball to talk about which watch parts are made by whom, but in an industry where there are few truly vertically integrated brands, it’s particularly interesting to find where some of the core components outside of movements are manufactured – especially between ultra high-end, and mid-tier luxury brands. One somewhat prominent example would be Sächsische Uhrentechnologie GmbH Glashütte (better known as SUG, under joint ownership by Sinn) who has been known to manufacture – and sign – cases for fellow German heavyweights like A. Lange & Sohne and others. 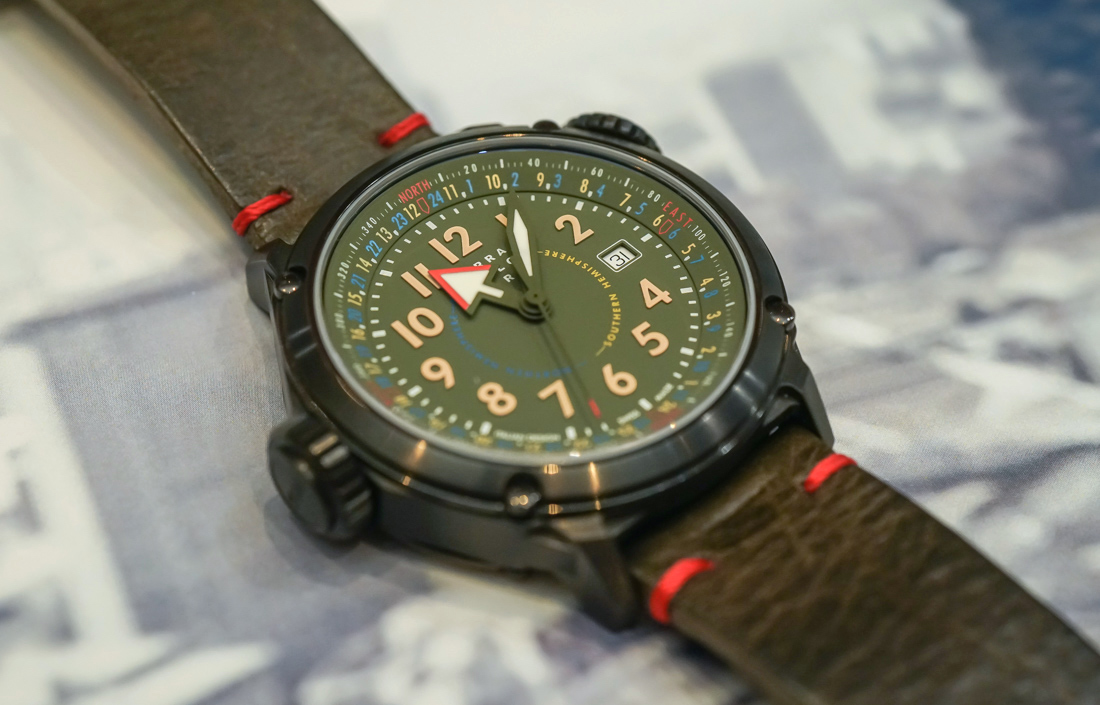 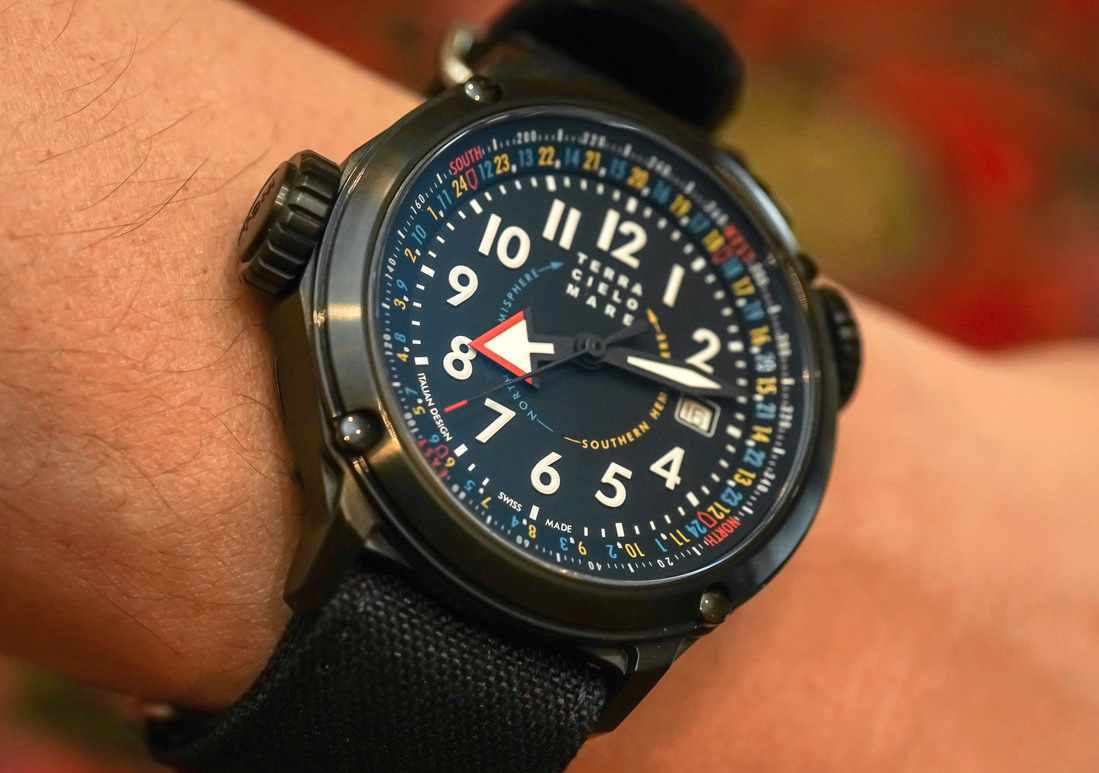 But back to the Orienteering – in addition to the fact that its case is extremely likely to be manufactured by the same folks who build watches that literally cost five to ten times more, it still has a lot going for it: distinct design, great functionality, 100m of water resistance, and a surprising degree of comfort and wearability, despite its somewhat chunky 44mm size. Much of this is due in part to the elegant titanium case design whose downward-curved lugs hug the wrist – particularly on the leather strap. The ‘destro’ (left-hand crown) design further aids in comfort, keeping the oversized time adjustment crown well away from the wrist’s articulation. 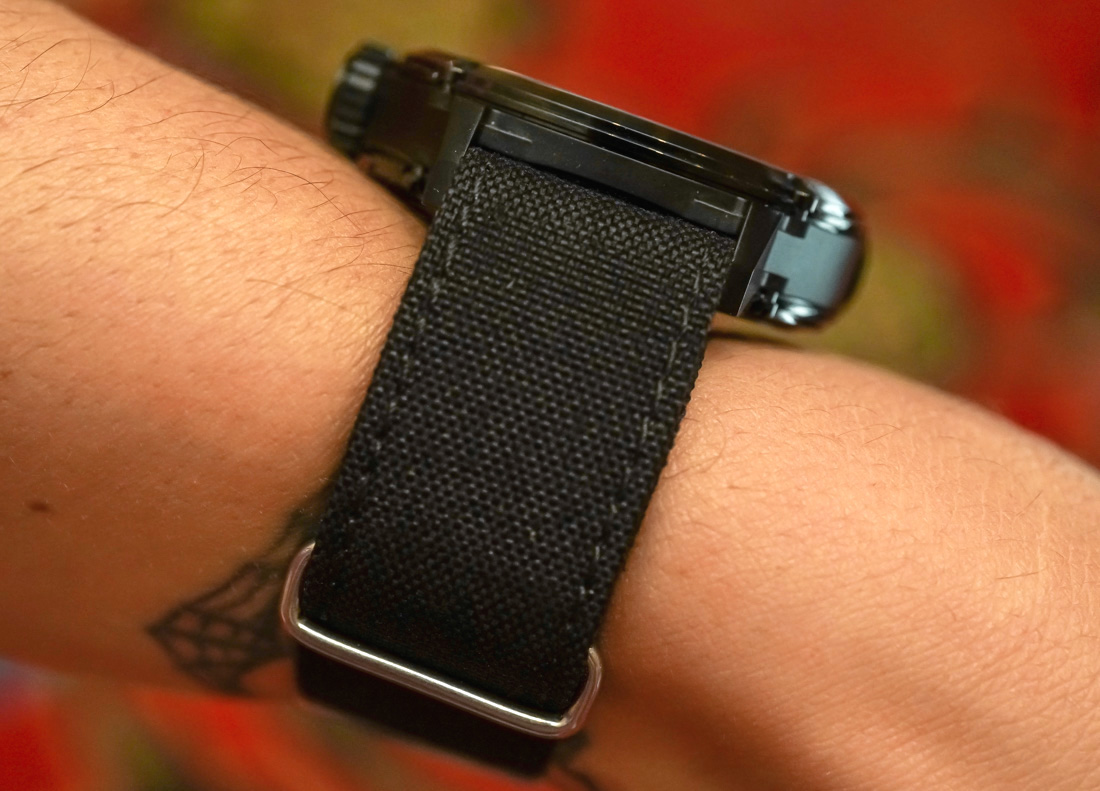 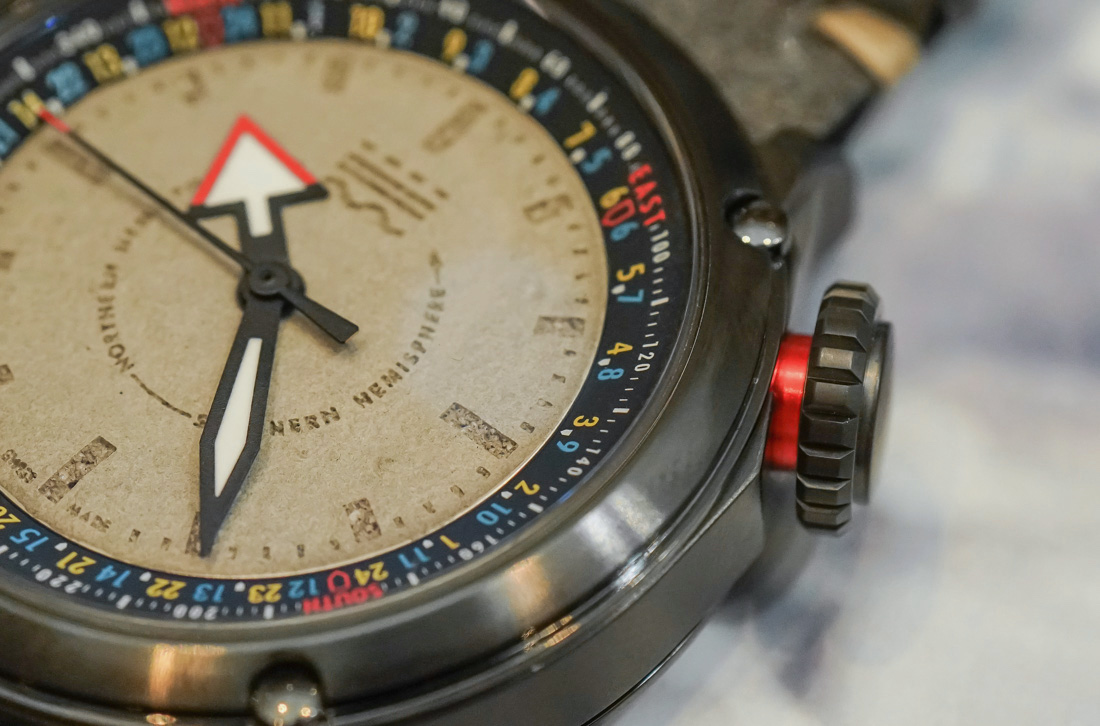 The other oversized crown at 2:00 also manages to stay out of the way, while handling the crucial bezel rotating duties. Thankfully, this push-pull crown (which is fitted with a neat red anodized barrel) is also grippy and oversized enough that it can be manipulated while the watch is on the wrist – which is, sort of the point, should one find oneself in the woods with little more than the sun to find the way. 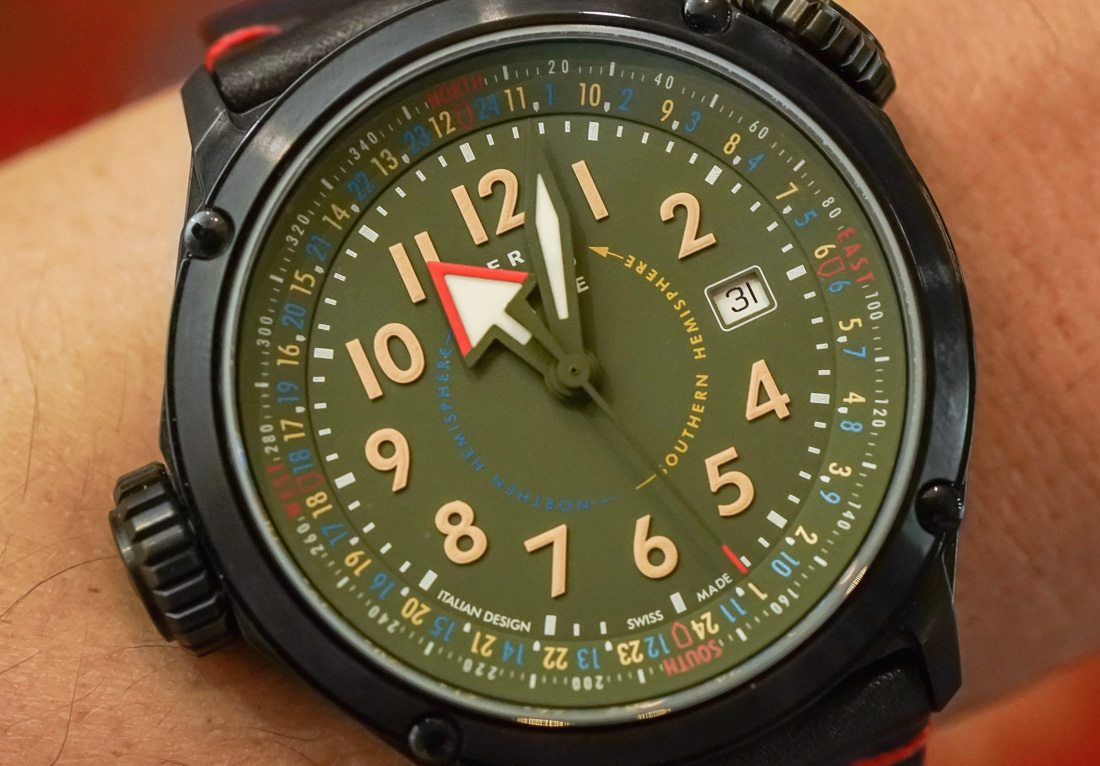 Unlike most watches based on 24-hour GMT movements (like the Bremont Endurance, for example), the sun compass on the Orienteering can be used from both Northern and Southern Hemispheres. It works a little like this: first, you pull open the crown at 2:00 and use it rotate the bi-directional bezel until the time in 24-hour format matches up with the current time shown on the 12-hour display, taking note of which hemisphere you’re in, as you’ll note there are actually two 24-hour scales on the ring – one for the Northern Hemisphere (in blue) and one for the Southern (in yellow). Once matched up, pop the crown back in, level the watch with the horizon, and then rotate the entire watch on a horizontal plane until the hour hand is pointed directly at the sun. The cardinal points on the bezel should show the navigational points. Like most boy scout wilderness techniques, it’s a process that obviously is open to a fair amount of imprecision, but if you’re stranded in the wilderness with a dead GPS unit (lithium-ion batteries are highly prone to rapid drain in cold environments – just saying), it should suffice. 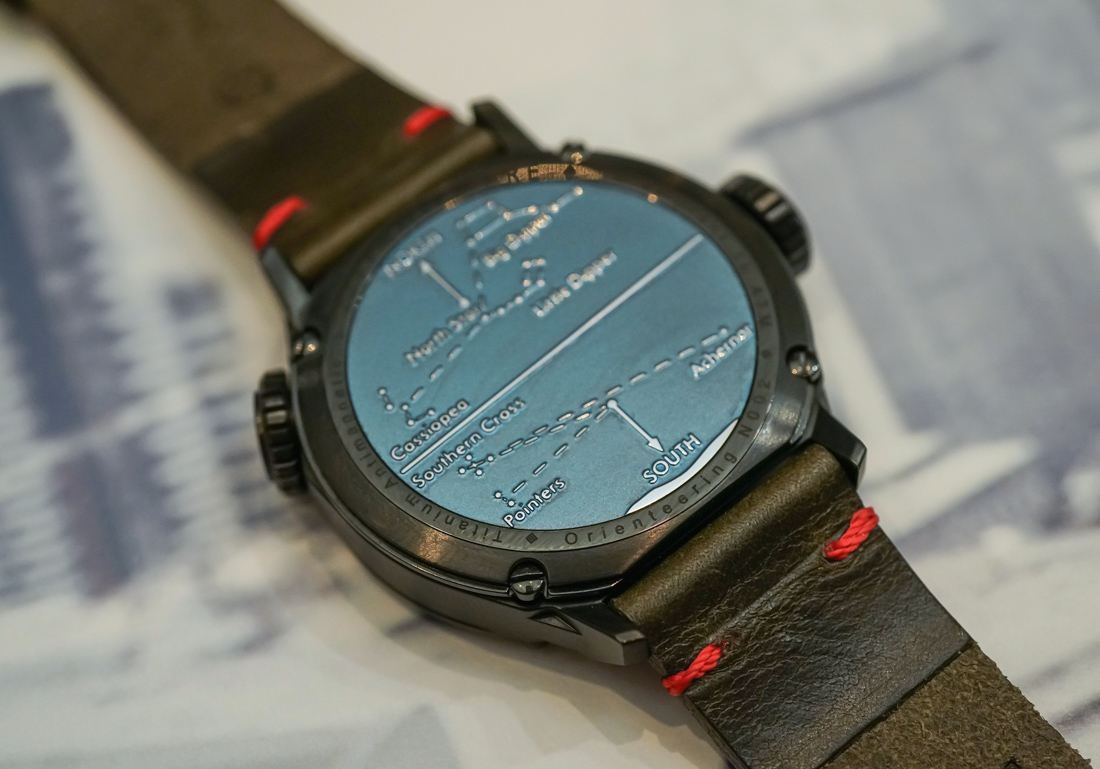 Flip the watch over, you’ll find another neat tie-in to the navigational elements upon which the watch is based: a blue PVD-treated titanium medallion with a celestial map relief, enabling the wearer to (theoretically) orient themselves at night with true north or true south by locating the North Star while in the Northern Hemisphere or the Southern Cross for those in the Southern Hemisphere. Throughout history, both of these celestial bodies have served as lampposts of sorts for pioneering explorers to find their way. However, whether or not this particular caseback would ever prove useful as a navigational tool is an entirely separate issue, but a pretty neat detail, nonetheless. 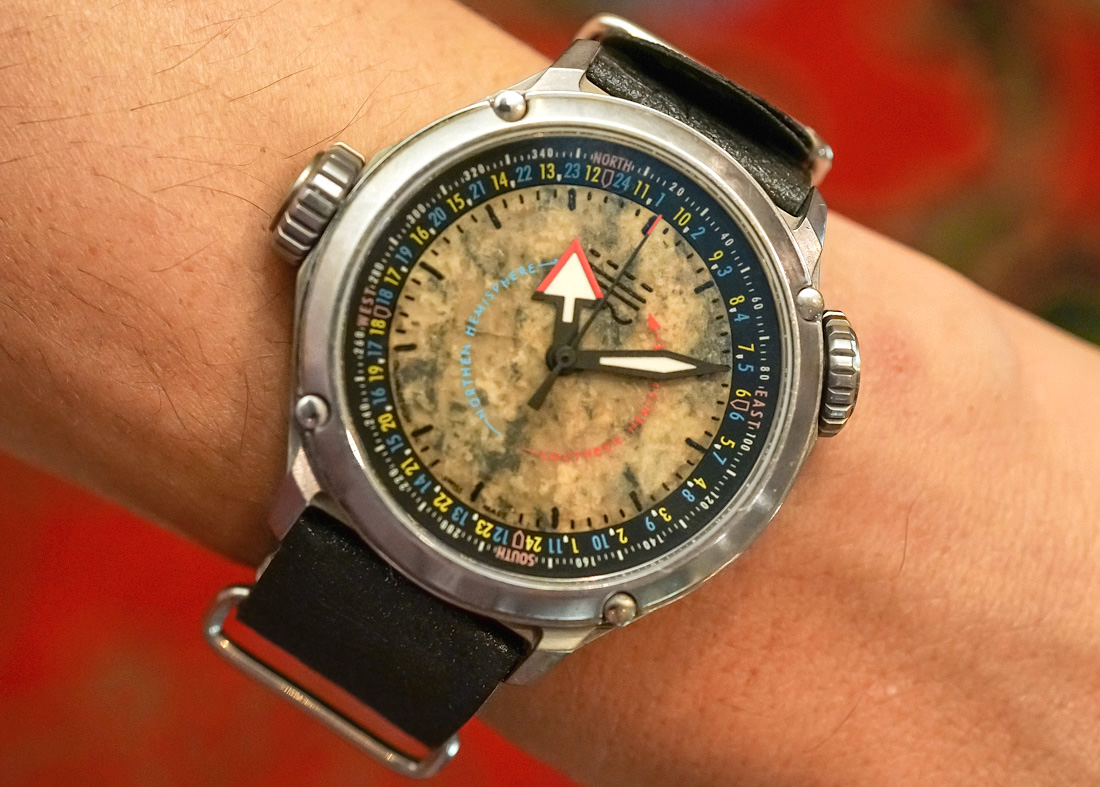 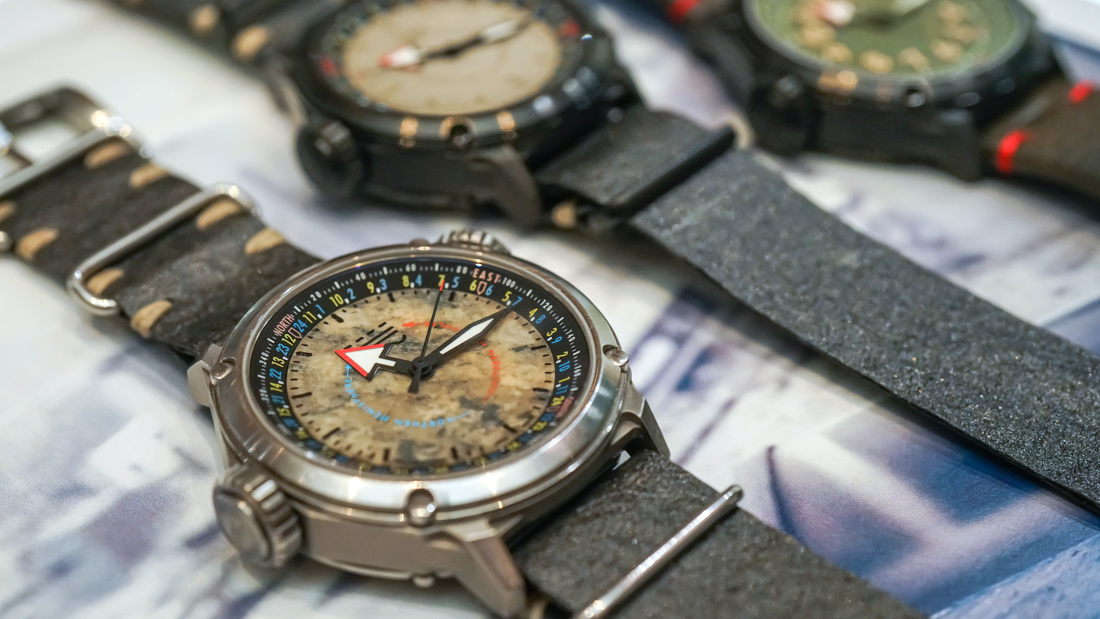 Now in its second generation, the Orienteering is quickly growing into a signature piece for Terra Cielo Mare, thanks in part to Fontana’s passion for the outdoors as an avid alpinist and mountaineer. The latest addition to the series is the ‘Tactical’ variant introduced at Couture with its dark green dial and applied beige Arabic numerals. Though the standard Orienteering comes with a PVD-coated black case and bold contrasting white Arabic numerals, the watch is also available with multiple, more limited dial variations, including a textured concrete dial inspired by Brutalist urban architecture, as well as a dial made with stone from the top of Cerro Torre – one of the most imposing climbs in the Southern Patagonian Ice Field. 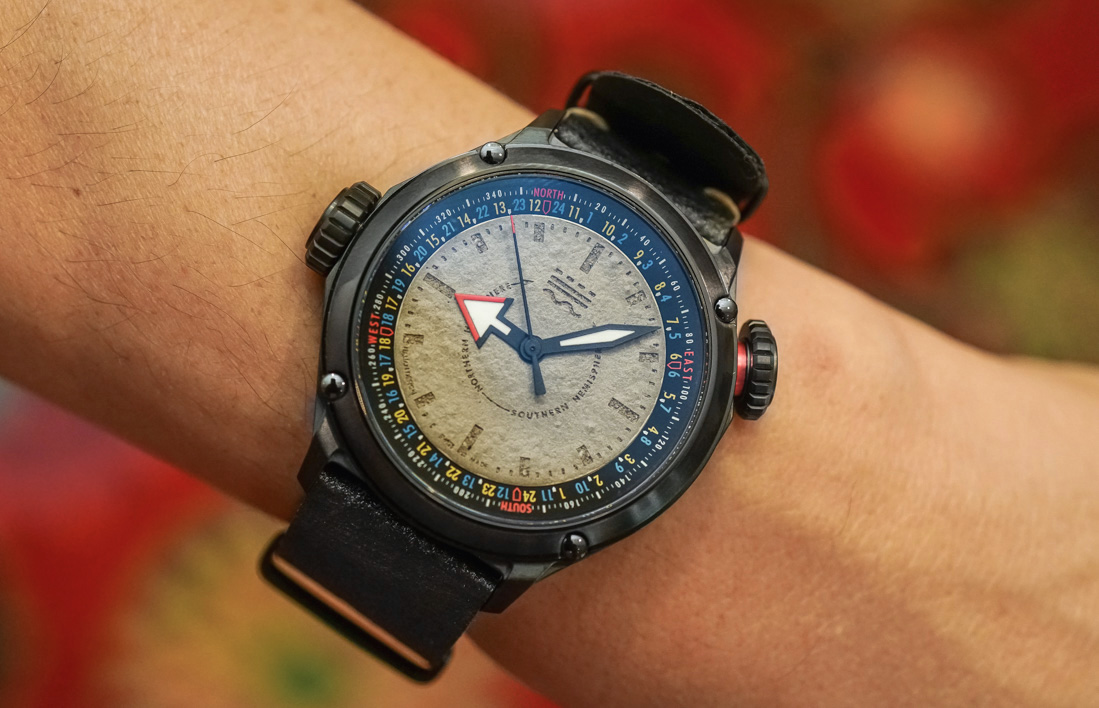 The Terra Cielo Mare Orienteering has a starting price of €2,600 for the standard version, though collectors can expect to pay a little more for the rarer, more unique dial variants. terracielomare.com