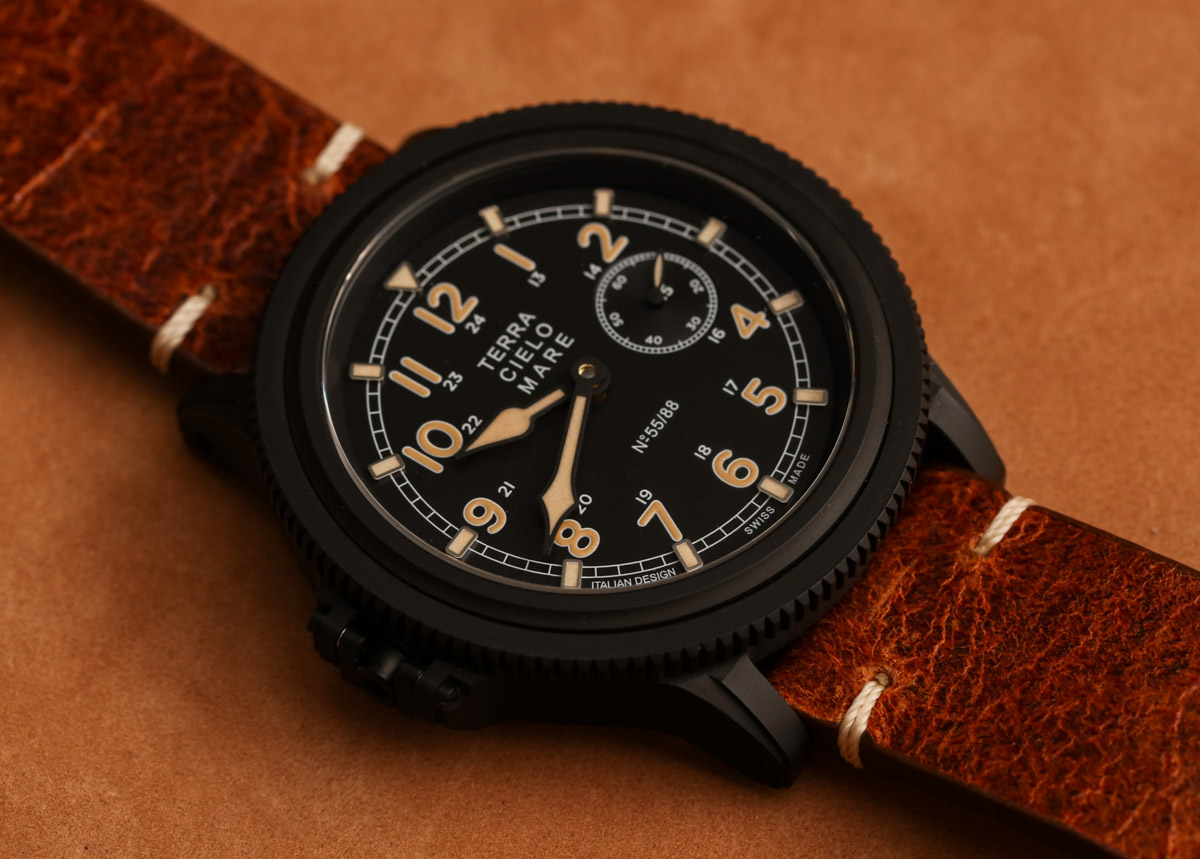 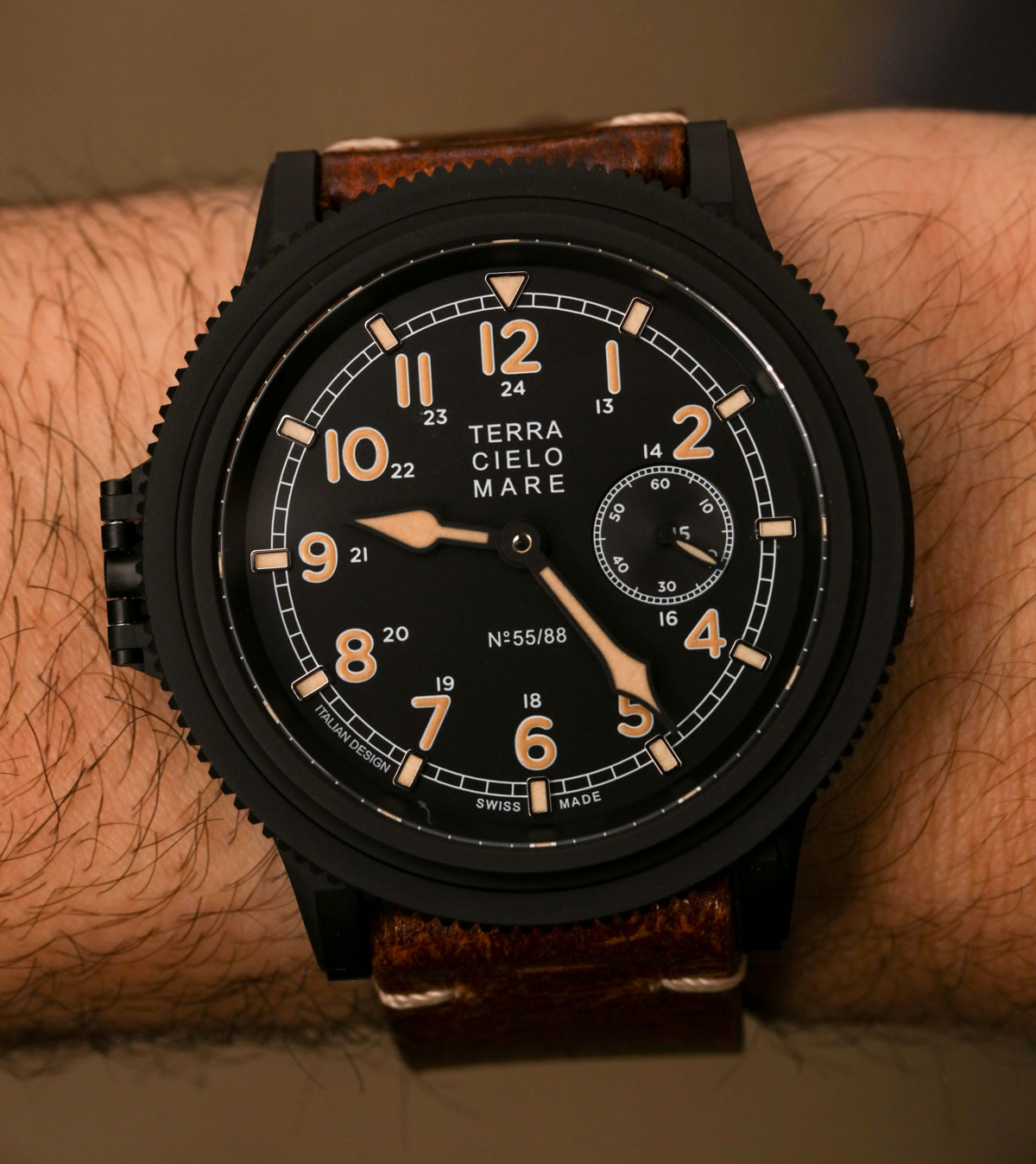 I didn’t think that a Swiss Made, Italian-designed watch inspired by a Japanese fighter plane would be one of my favorite timepieces of 2018. Indeed I found a lot to like about the Terra Cielo Mare Zero Sen – a rather limited watch from a still boutique Italian brand whose owners have a deep level of history in the larger luxury watch industry. Also important is that this watch is a crowd favorite and gets a lot of compliments. Terra Cielo Mare (sometimes abbreviated as “TCM”) is considered the pet brand of the family who mostly operates as a supplier for other big-name luxury timepiece makers. I’m not a fan of each and every Terra Cielo Mare product, but the Zero Sen for me was a real winner (despite having some quirks).

The Zero Sen (aka Zero-Sen) is the second watch produced by Terra Cielo Mare with this particular “crownless” case. Let’s discuss that distinguishing element here because it is one feature which really helps set this watch apart. The first Terra Cielo Mare watch with this neat case was the also limited edition and thematically similar Terra Cielo Mare Il Sorci Verdi. The Zero Sen has a different dial design and rather than focusing on a vintage Italian aircraft, focuses on a vintage Japanese one. Both of these watches use a case produced by Terra Cielo Mare, which is designed to not have a crown – at least not in the traditional sense. Instead, the user changes the time and can manually wind the automatic movement using the bezel. 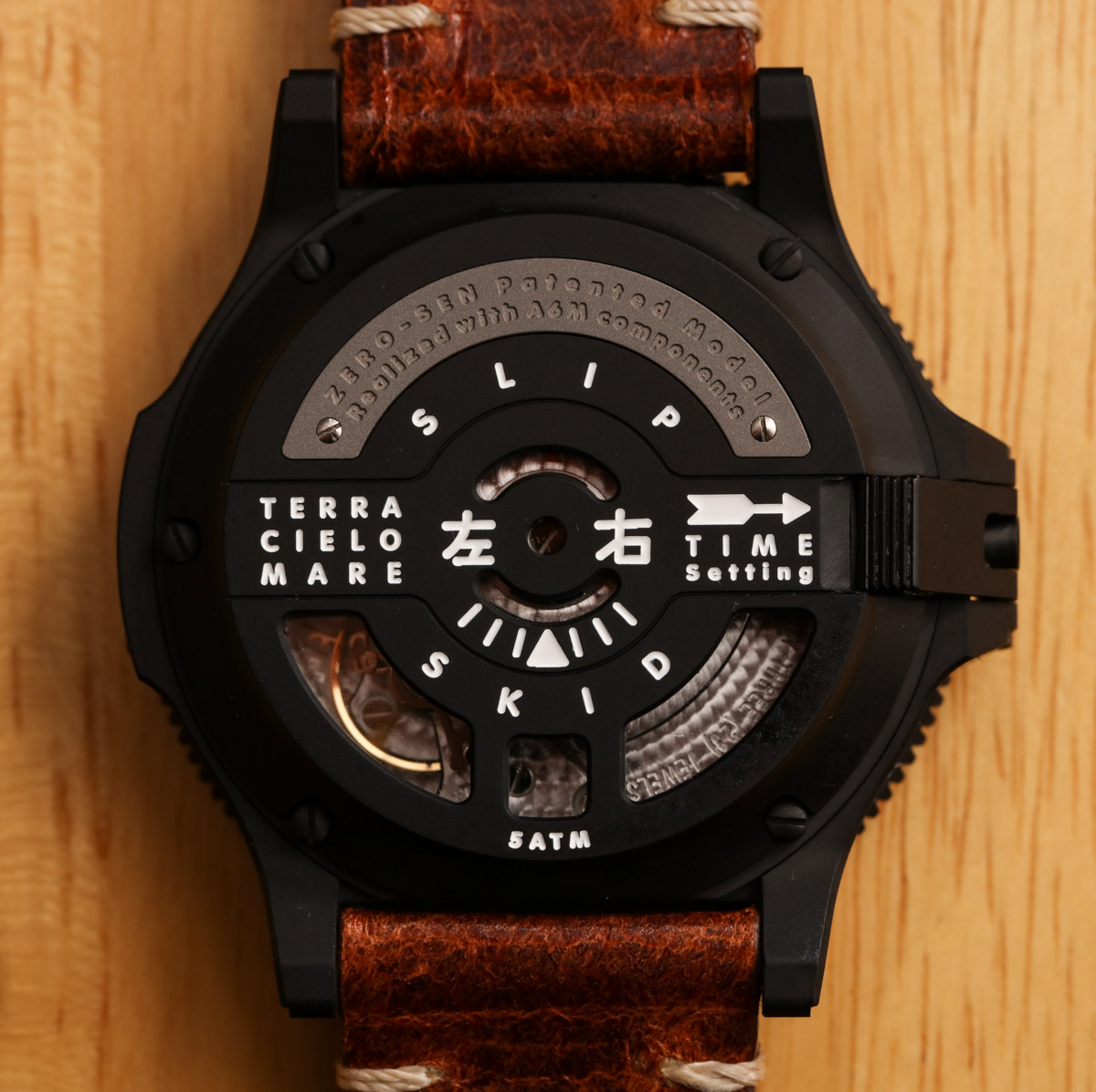 This is done with a lever system which connects the bezel to where the crown would be. Located on the left-side of the case, you use your fingers to pull out the lever to the various crown positions (winding, time setting) and then rotating the bezel of the watch rather than a crown. My favorite part about this is that it makes the experience of idly sitting there and winding your mechanical watch a bit more fun – because turning the bezel is a little more satisfying (from a tactile perspective) than turning a smaller crown. It is however tough to pull out the lever system when the watch is on your wrist. Meaning that if you wish to adjust the time, you’ll need to take the watch off.

The lever and bezel system are innovative and fun – but not perfect. There is a bit too much tolerance in the parts and something in there rattles when you move your arm around. It doesn’t help that the smooth turning automatic rotor (which is on ceramic ball bearings, I believe) also makes some sound. This is just a small area of refinement that Terra Cielo Mare might want to address later. I think this system is a winner so it makes sense that the company would want to refine it further in the future. As it is, this case is both fun to use and cool to look at. 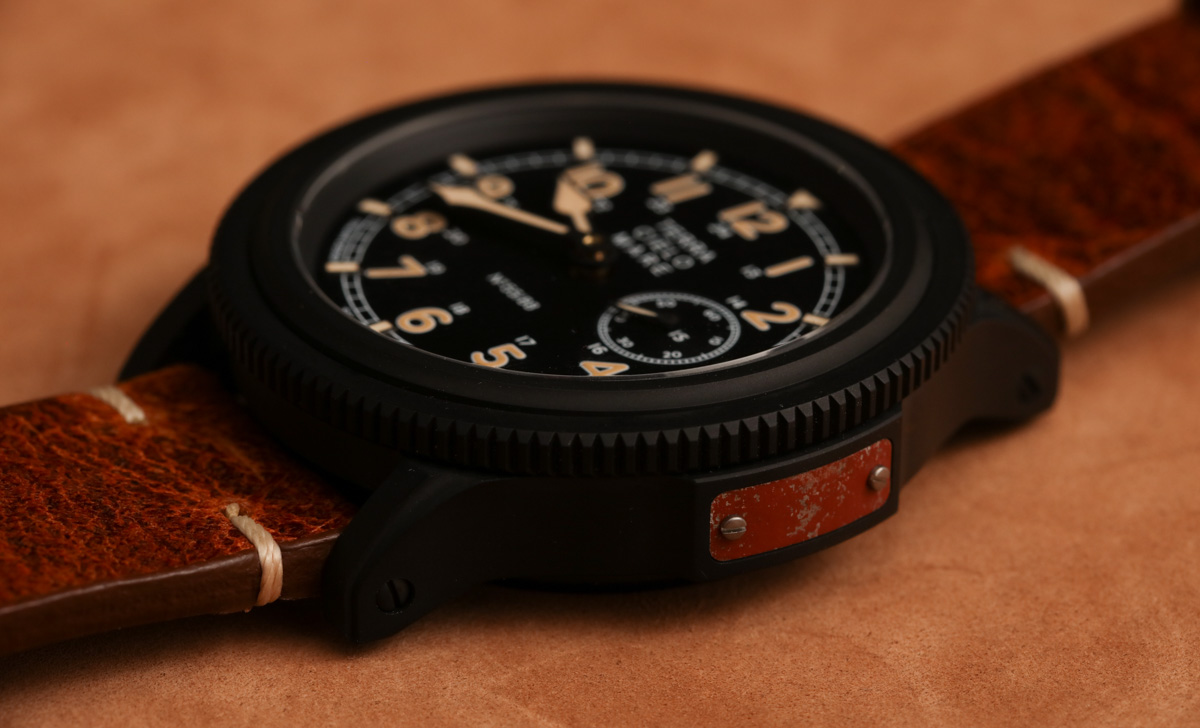 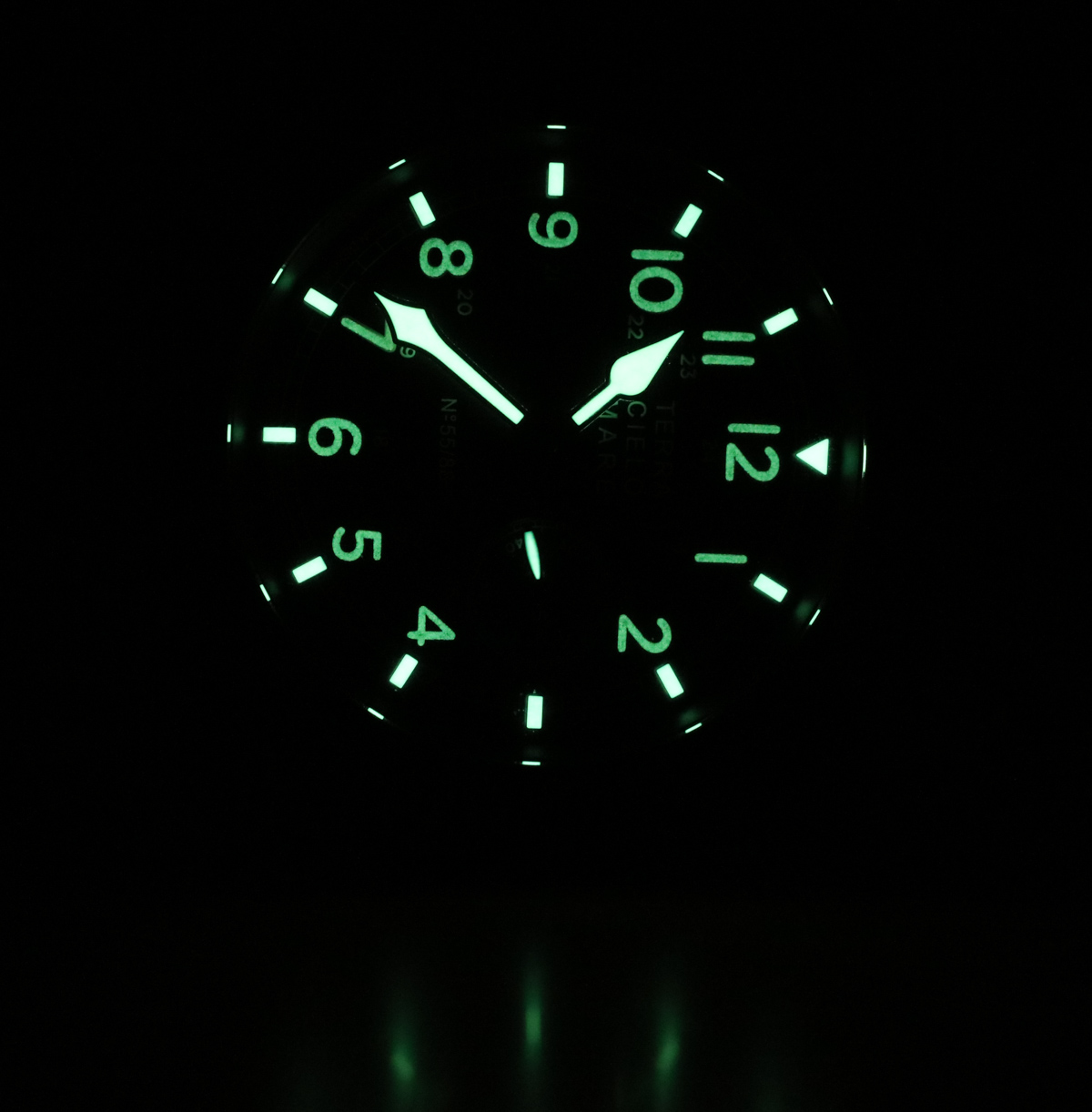 The rear of the case has a semi-open metal caseback over a sapphire crystal that Terra Cielo Mare calls a “back case on two levels.” The design of which has a rendition of a slip and skid inclinometer with the Japanese characters for “left” and “right.” The case itself is water-resistant to 50m produced in titanium with a matte black PVD-coating. Very comfortable on the wrist, the case is 43mm wide (not including the crown system) and about 15mm thick. I found it to be a very appropriate size between “wearable” and “sporty.”

On the right-side of the case is a metal plaque with deteriorating red paint on it. This is where the “Zero-Sen” part of the name comes in. This piece of metal was taken from a World War II Japanese Mitsubishi A6M fighter plane – apparently one that was abandoned by the Japanese in the Pacific during the theater of war there. The A6M was also known as the “Zero,” and remains the most well-known Japanese vehicle from the era. I believe that this particular piece of metal was cut from one of the red circles painted on the plane, which are meant to evoke the Japanese flag and designated the country flying the plane. As a fan of military history I find this connection to World War II interesting, though I do feel that connecting watches to weapons is sometimes a bit of a gruesome thing. In any event, even though the plaque is cool, I wouldn’t say that it is a major part of why I personally really like this watch. 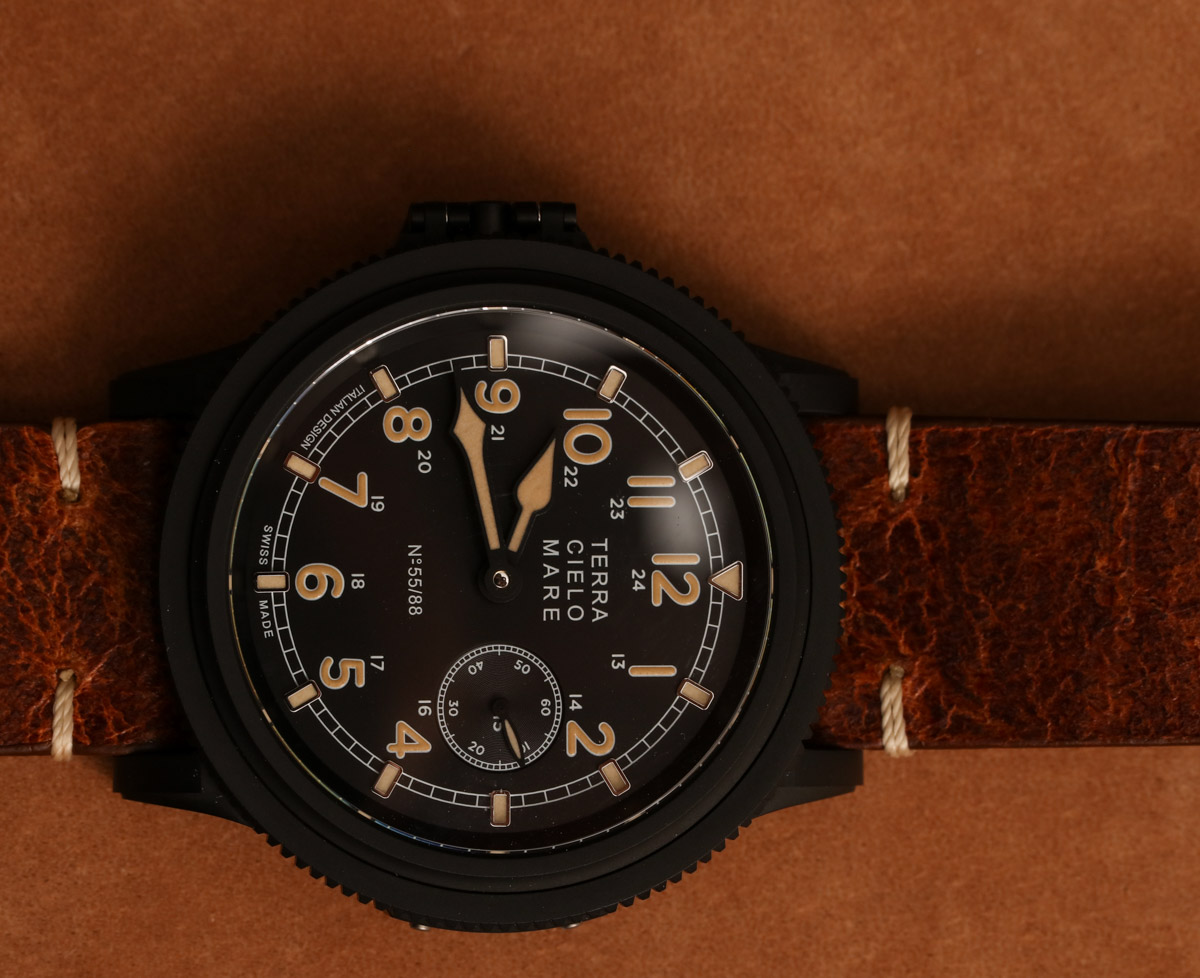 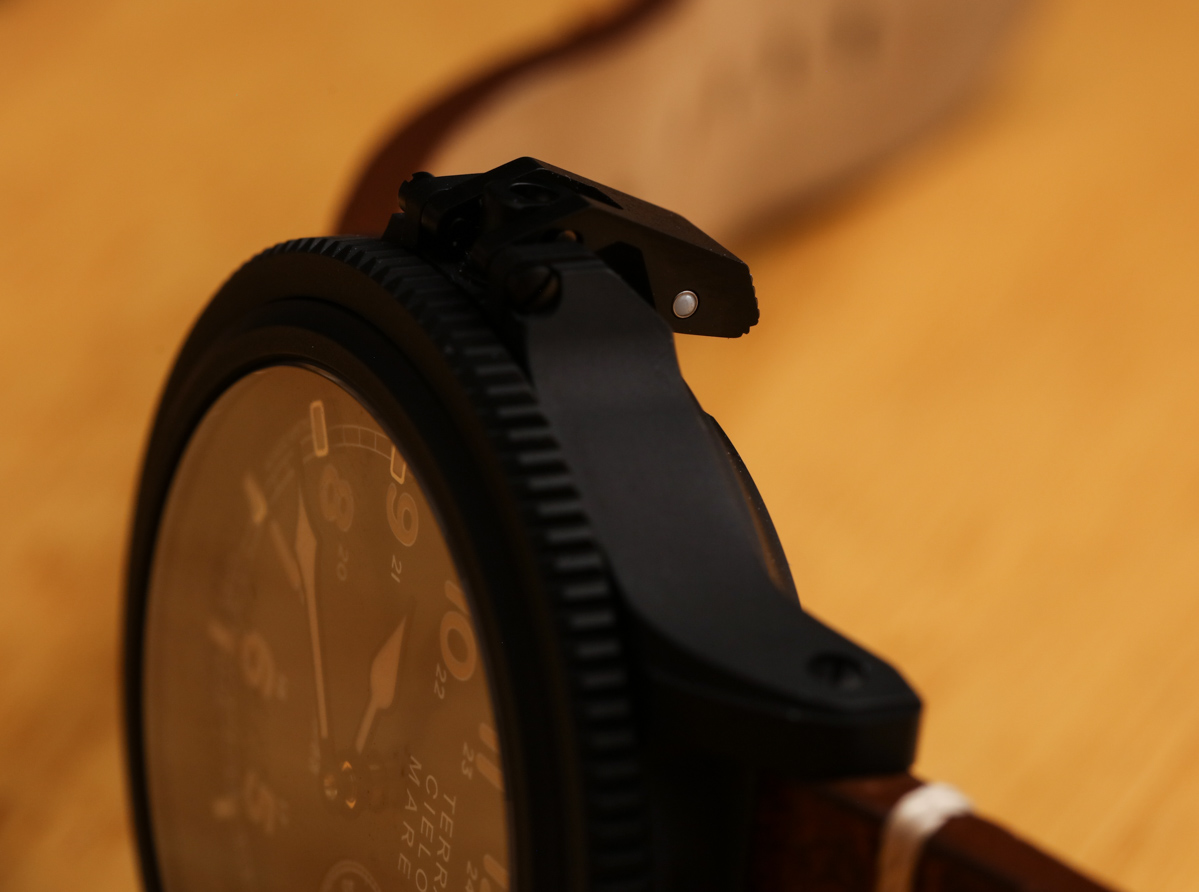 With the matte black titanium case and vintage-instrument style dial, the Zero Sen is a looker. Say what you will about “faux aged luminant,” but in my opinion this sandy-colored Super-LumiNova is attractive and I don’t care if it is trying to look like something aged. The overall dial design is clever. Terra Cielo Mare allows for a bit of depth by applying hour markers around the periphery of the dial, which offer a little bit of eye-catching light reflection. Inside are Arabic hour numerals paired with appropriate looking hands. Proportions and legibility are great. Given the “upside down” orientation of the movement, the subsidiary seconds dial is located at 3 o’clock. 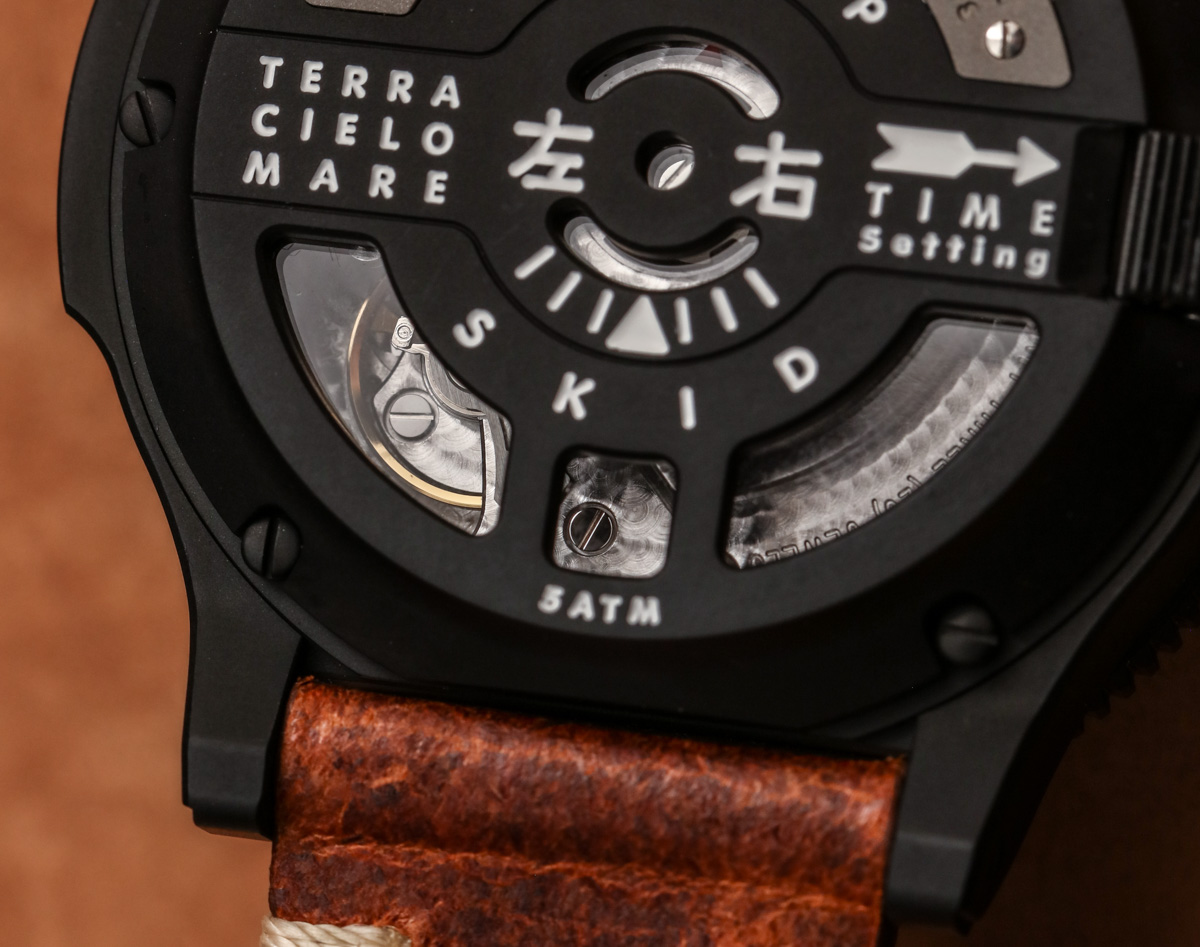 Inside the Zero Sen watch is a pretty high-end Concepto movement known as the caliber TCM-3900. The automatic movement operates at 4Hz with about two days of power reserve. You can’t see much of it, but the movement is also decorated with “micro perlage.” I’m not even sure that such an exotic movement was necessary in a watch like this, but it helps with the overall “collectability” and you won’t hear me complain about it. Though it does affect the retail price of the watch, which some people can easily argue is on the higher end. 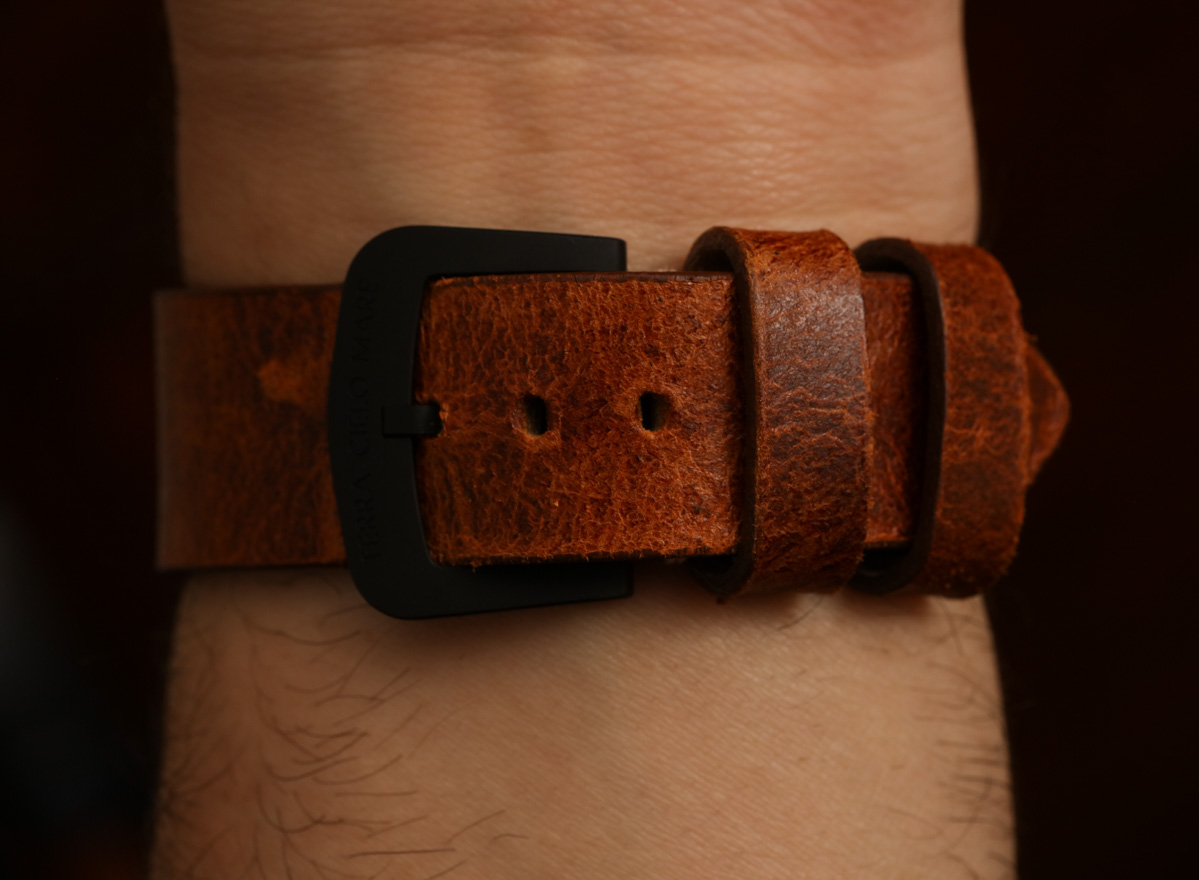 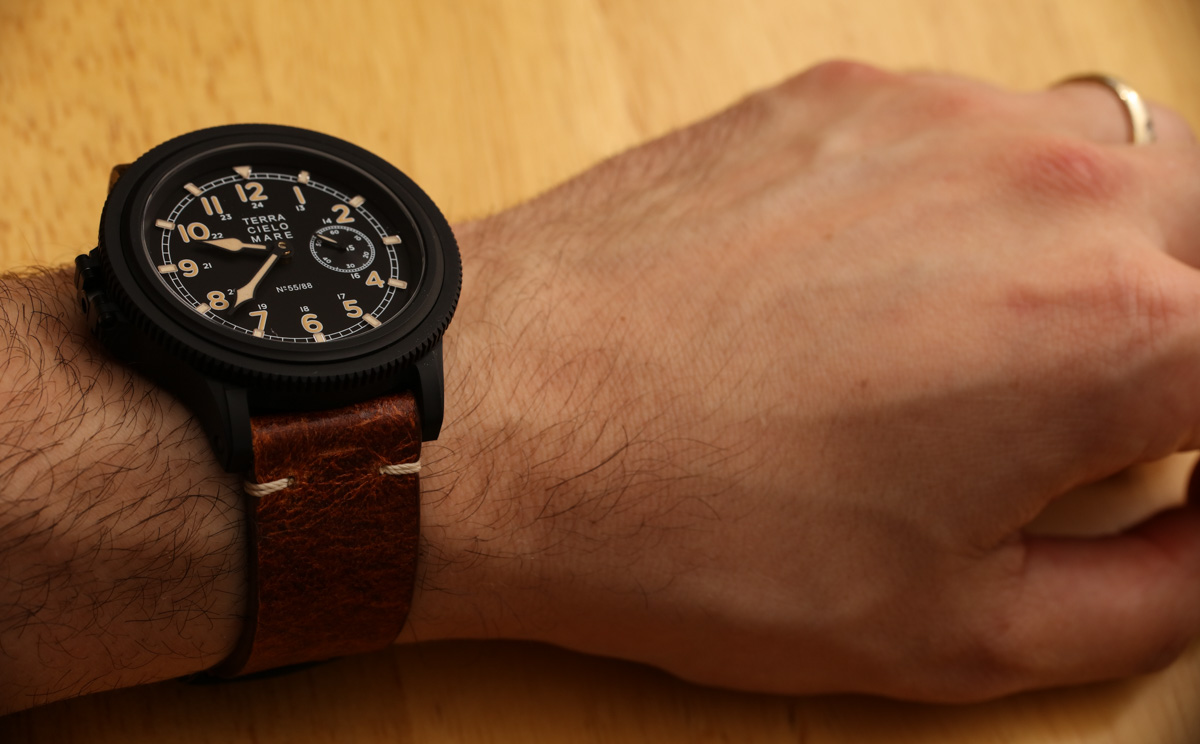 Attached to the case is an Italian strap (of course), which is hand-stitched and also meant to look aged. The brown “worn” strap looks lovely to be honest and pairs with the Zero Sen case and dial very well; high marks for the overall fashionability of this watch. In general the Zero Sen simply looks good and feels good, which is why I keep wearing it so much. It certainly doesn’t immediately look like any other vintage military pilot watch out there, but it is at the same time entirely familiar and easy to approach for those people who still like popular designs and themes. Terra Cielo Mare didn’t just make the Zero Sen look attractive, but understands the minds of watch collectors enough to know how to spec out the watch to make it desirable. Thus, the combination of fashionability and watch lover technicality make the Zero Sen limited edition a winner in my book. Its quirks, such as being a bit on the noisier side, don’t bother me much and help give the watch personality. What would an Italian watch be without personality? Price for the limited edition of 88 pieces Terra Cielo Mare Zero Sen watch is €5,590. terracielomare.com

Necessary Data
>Brand: Terra Cielo Mare
>Model: Zero Sen (Limited Edition of 88 pieces)
>Price: €5,590
>Size: 43mm wide (without lever system), about 15mm thick
>When reviewer would personally wear it: Really versatile watch, so anytime it fits with what I am wearing.
>Friend we’d recommend it to first: Military pilot watch lover with a penchant for vintage design and interest in modern watches with character and collectability.
>Best characteristic of watch: Movement winding/adjustment system is cool and fun to play with when bored. Dial is legible and very attractive. Use of unexpected but appreciated high-grade movement. Strap is really nice and overall fit is comfortable for the case.
>Worst characteristic of watch: Lever system works well enough but rattles a bit and should be further refined by the brand. Price of the watch is on the high side, but the cost of the parts and special design treatments does seem to add up with this highly limited edition set. Not everyone will want to be reminded of military deaths when wearing a timepiece, no matter what inspired it.