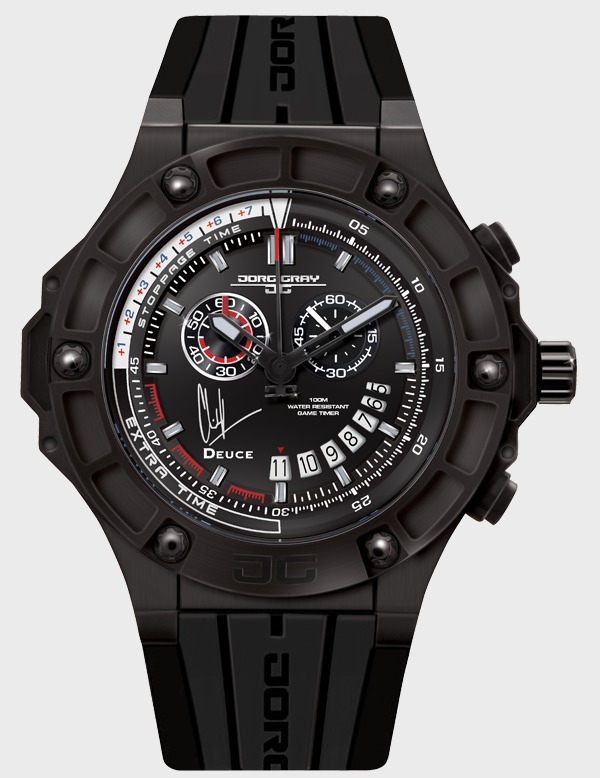 In the wake of adding soccer star Clint Dempsey to their list of ambassadors, watch brand Jorg Gray has announced a new limited edition watch to commemorate the partnership. Clint “Deuce” Dempsey is an American soccer player who plays in both British and American leagues. Dempsey was recently traded from Fulham FC to Tottenham Hotspur FC in the British Premier League and is regarded as one of the top strikers playing today. The new watch is the Jorg Gray 2500-22 Clint Dempsey Limited Edition Game Timer and, unlike many ambassador models released to the watch world, Clint Dempsey actually helped to style and design the 2500-22. Dempsey fans should definitely take note of this limited edition soccer themed watch. 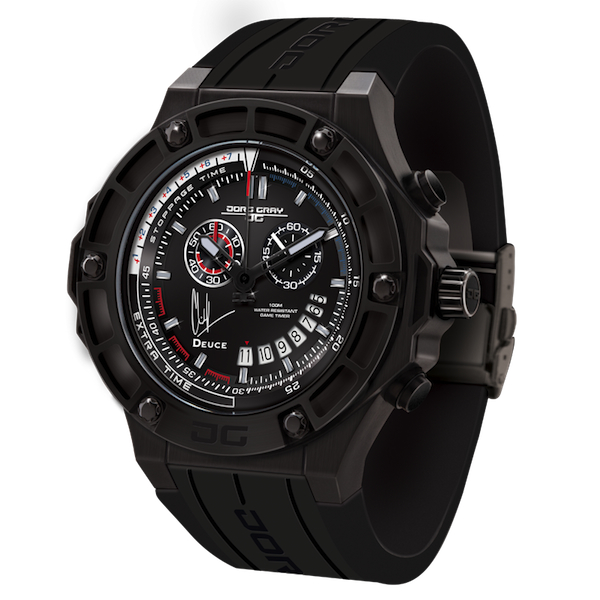 The idea behind the 2500-22 is that is has been designed by a soccer player for soccer fans. Measuring a prominent 52mm across, the 100m water resistant stainless steel case features an integrated rubber strap and a sapphire coated mineral crystal. Ticking away inside is the ISA 8271 quartz movement which features a football timer that can measure not only a 45 minute regular time countdown and a 15 minute extra time countdown, but also track up to seven and a half minutes of additional time. While I am not much of a soccer fan, I can see it being fun to keep time along with the game as it plays, especially if you are watching a game in person and not just on the TV. The dial is adorned with Clint’s signature and “Deuce” nickname, and the bezel is ionic plated black to match the PVD case. Aesthetically, you will see elements from Linde Werdelin, Hublot and maybe even a little Richard Mille. I think the look is very sporty, aggressive and masculine which should do well with its intended market of serious soccer fans.

We were interested in learning a bit more about Clint’s involvement and experience in working with Jorg Gray to design a watch that he was willing to put his name on. Luckily for us, Clint was able to answer a few questions to shed some light on the process and his thoughts on watches in general: 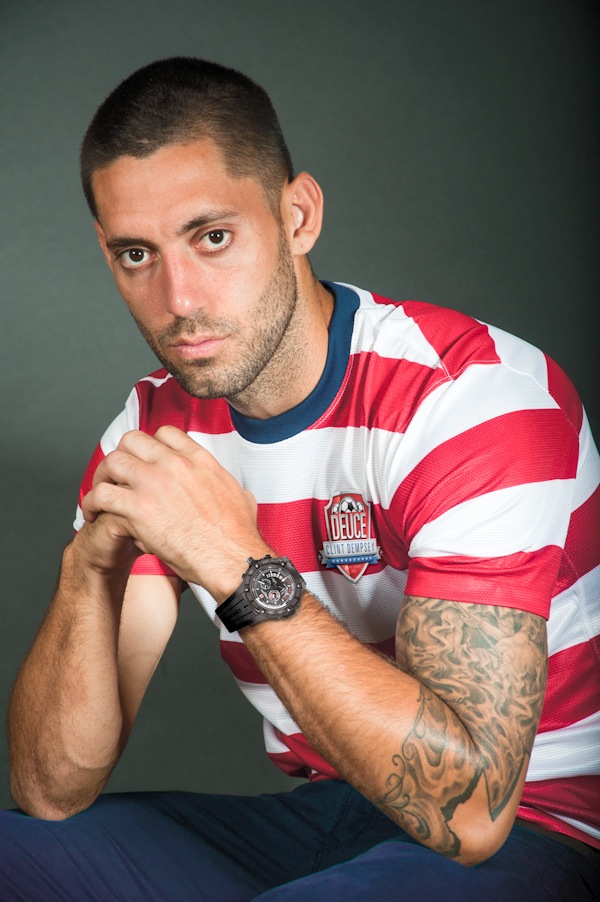 James Stacey: Why design a watch? Are you a fan of watches in general or was it just good fun given your ambassadorship with Jorg Gray?
Clint Dempsey: I’ve always been a fan of watches, they’re something I enjoy. There’s something about wearing a good watch that just makes you feel good. Time is such an important part of your day, you only get so many minutes and you can either let it be a hindrance or let it be a positive. I definitely like to look at the time you have in a positive way, and that’s why I enjoy watches.

JS: What elements of the design were left in your control?
CD: Jorg Gray let me create something that I was going to be able to get a lot of use out of, so I wanted something similar to watches that I’ve had previously. I asked them to make sure that you could get it wet, so you could go fishing or swimming with it on, but at the same time you could wear it with a suit. I wanted it to be an all-black watch, with a rubber band on it to give it a mean look while still looking nice. I just wanted to make sure that it was very versatile. I was really happy to be able to have a say in designing the watch because when you have that input you’re going to obviously like it that much more. Then the more you like it, the more you’re going to wear it. When I can wear a watch with pride I think I’m able to push and promote the watches a bit better, so that’s always a good thing.

JS: Were you able to influence the size of the watch? 52mm is quite large, does the size of the 2500-22 reflect your personal tastes?
CD: I didn’t really have any particular say in the size of the dial, I was more concerned with making it mean looking, but I think Jorg Gray has done a good job with it. I’m really happy with the way it has turned out, it doesn’t feel too big and it definitely has that edgy feel that we were looking for. I like to think that its versatility is a good reflection of my personality in the sense that I’m chilled when off the field but as soon as I get on the field I bring that grit and determination.

JS: What were the essential features or qualities you wanted to see included with your limited edition?
CD: The water resistance was crucial as I like to wear a watch all the time and when you like fishing and swimming, like I do, then you want a watch that you can do everything in. The more chance you get to wear it, the more you get your money’s worth! It’s the kind of watch that’s going to last the test of time, and I’m a strong believer that the more you wear a watch the more you will like it and the more it becomes a part of you. That’s why I wanted to have a say in the design of watch, because this is something that I’m going to want to wear more often.

JS: What is your favorite aspect of the watch?
CD: I like a lot of things about it but I’ve always had black cars, and I think that a black watch gives off a cool kind of vibe. So yeah, that’s one of my favorite aspects of it. Then the details Jorg Gray went into in making sure that I could wear it in everything I do is important too. It has a tough dial on it which would be difficult to scratch and the rubber band on it so that you can get it wet without messing things up inside. But I like everything about it to be honest….

JS: So what is it like being an American guy playing for an English soccer team?
CD: It’s cool because it’s one of the best leagues in the world and coming from a small town in Texas this is something that most people only ever dream about. Getting to play in Europe and a league like this is great. Some people where I’m from have never left the States, so it’s a great feeling to be able to fly the flag over here. There’s a good few other guys that have played over here, especially some of the guys in goal like Brad Friedel and Kasey Keller. Then there are the guys like Claudio Reyna and Eddie Lewis who have been over here too. But I’m just looking to play my part, go as far as I can go and make the most of my career. 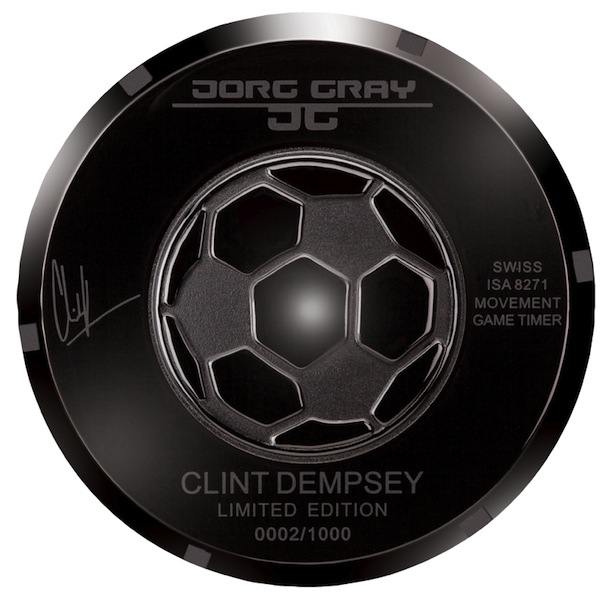 We would like to thank Clint for making some time in his busy schedule to answer a few questions as it is undoubtedly cool to see that Jorg Gray was able to design a watch that reflects his tastes. The Jorg Gray 2500-22 Clint Dempsey Limited Edition Game Timer has been limited to 1000 units with a list price of $795. While the 2500-22 may not be hugely interesting from a horological standpoint, it is a watch with a built-in audience. Given its extremely soccer-centric (or football-centric) design and feature set, the 2500-22 LE should have little trouble finding a home with some of Clint’s biggest fans.