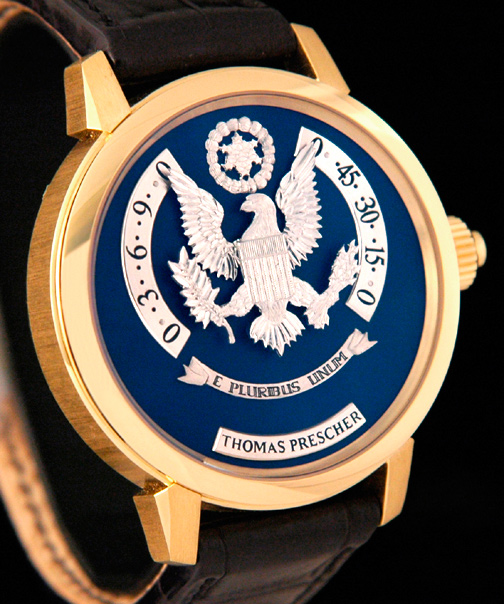 Today is going to be a historic day, and call it a hunch, but I have a feeling that we are going to be discussing the election for a while, though I hope this isn’t going to be another Floridian style ballot disaster, but I digress. Today, all Americans can appreciate a watch of this ilk. While this is a Swiss watch, the representation of the American Bald Eagle in its symbolic stance is perfectly crafted. The golden emblem does the great American seal justice. But that isn’t the gist of it, this is a watch as well.

The Thomas Prescher Tempusvivendi series is based on a double retrograde movement meant to display the hours and minutes through two moving hands. The movement is an automatic mechanical movement with a 40 hour power reserve and a special push button on the crown. Pushing the button returns the hands to the position in the pictures. This is the “resting” or non-temporal position of the watch hands. This so you can see the American Eagle in its more regal of states. Pushing the button again returns the hands to a temporal position so that you can view the time. Thus, you have these two moves of operation at your disposal. 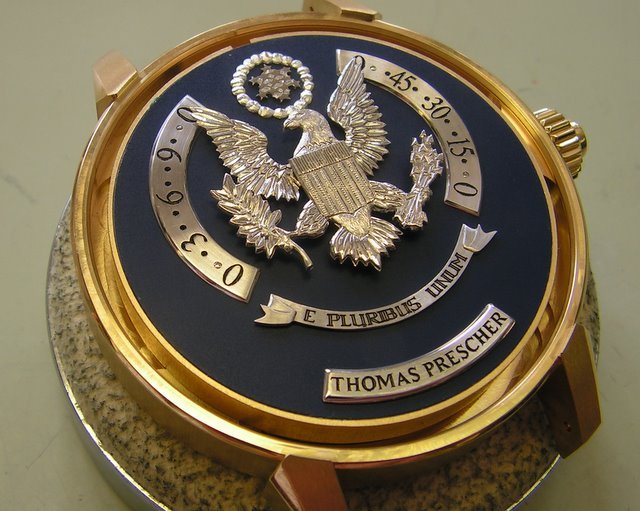 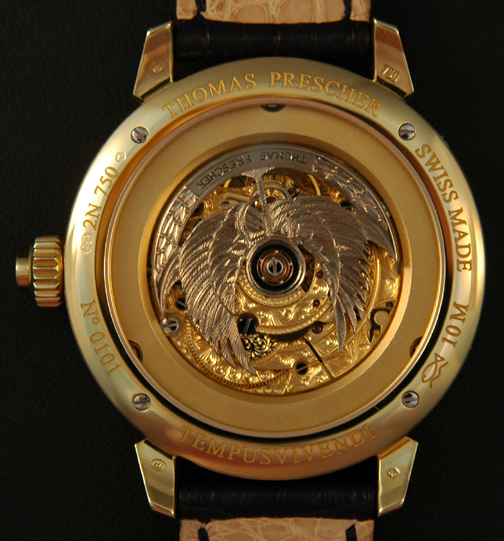 Looking on the rear of the watch you can see the very finely decorated movement in gold, with a 22k gold rotor with has been engraved with the Thomas Prescher winged logo. The engraving is a mixture of guilloche and hand engraving. Top quality work.

The American Eagle on the dial, along with all its parts are also done in white gold, and mostly hand engraved. Trust that meticulous detain is involved in each part, with all imperfections being canned. The dial itself is enamel. Size wise the case is 43mm and the strap is hand stitched crocodile. Of course it comes in a nice wooden box.

Watches such as this with retrograde arms were popular in the 18th century, and a bit into the 19th century. Their complexity and character being cherished. As they became a bit less practical, and most decorative, their numbers subsided, but the creative watch maker could always produce something inspiring such as this Tempusvivendi. Thomas Prescher delights in the ‘old” and really excels and making such artistry feel fresh again.

So here you have a perfectly American watch, from a Swiss watch master. I’d like to see all new appointments to civil office be required to adorn watches such as this, though we might need more economical versions for most elected officials. The Thomas Prescher Tempusvivendi American Eagle goes for about $64,000.