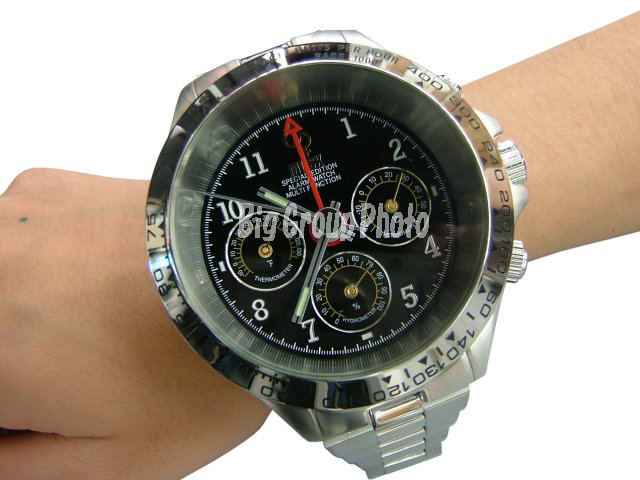 Think You Know Large Wrist Watches? See The MUSK MR2129 Watch, Although It Is Really Hard To Miss

Leave it to the Japanese to release products with a very limited market, albeit sometimes a very dedicated market. The MUSK MR2129 has a mission. That mission was to be the largest, goofiest looking wrist watch ever. Taking styling cues from a number of popular watches, especially the Rolex Datejust and Daytona, the MUSK MR2129 has familiar looks even though it is huge. We are talking novelty big here. The entire watch weights over 1.5 pounds with a 90mm wide face.

The features on this quartz movement based watch are actually rather interesting. Aside from telling the time, you have an alarm (represented by the large red hand), a thermometer with two scales (one dial for Celsius and another separate dial for Fahrenheit), and a hygrometer used to measure the relative humidity. This might mean the watch is mean to be placed on a watch or desk, which it certainly can be I am sure.

I love the completely nonsensical MUSK logo. You have an intertwined male and female symbol, though this is clearly not a unisex watch. Actually, I take that back, this is not a watch for a man or woman, as it would look equally silly on anyone’s wrist. Thus the logo fits perfectly with the other elements of this watch that make no sense. It is only a matter of time before you see some wearing a MUSK MR2129 around their neck.

The point making a watch like this two-fold. First is an exercise in excess. Merely making something large and bloated for the point of it. A proverbial chuckle to the norms and customs that govern our tastes and actions. This results in shock value, along with the ability to say that you have the largest, craziest, and most outspoken watch around. The price point of this watches makes it clear. This isn’t around to a fine timepiece. While it doesn’t look particularly crappy, I am sure it is not meant for longevity. Second, this watch is humorous artwork. A true extension of pop culture criticism commenting on the value we may place in luxury goods. The functions of this watch are best used while it is not on one’s wrist (as body heat will detract from the thermometer’s ability to accurately tell ambient temperatures). So the watch is a desk item hearkening to our love of social commentary.

These watches were actually relatively inexpensive, going for about $210.00 brand new. Never available directly within the US, no doubt a few examples are floating around or will show up on eBay from time to time. If you simply must have a MUSK MR2129 watch, when wearing it (if that is even practically possible), please don’t flail your arms around wildly as this is sure to cause injury to someone, or yourself.