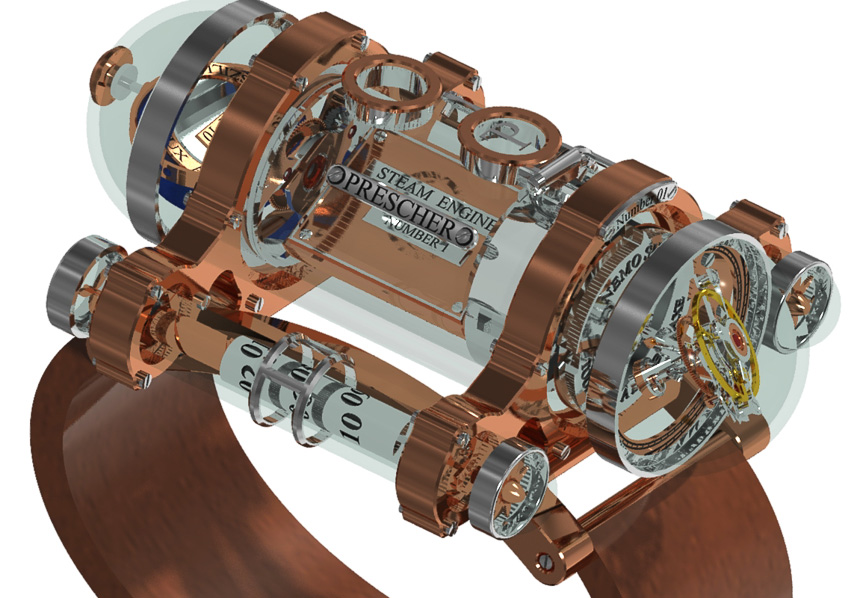 Late night e-mails from German-born Swiss watchmaker Thomas Prescher are always interesting. This is the man who has brought us the first triple axis-tourbillon and who really epitomizes the concept of independent watchmaker. Always inspired, the newest watch by Mr. Prescher is his most impressive and ambitious project yet. Called the Nemo Sub I, this is perhaps the most interesting new watch of 2014, and is likely to stay that way.

What you see is a mostly sapphire crystal case that is meant to look like a steampunk submarine dreamed out of the work of early science fiction writer Jules Verne. This is also the third in a series of “Nemo” watches, inspired by the Captain Nemo character that is featured in Verne’s Twenty Thousand Leagues Under the Sea and The Mysterious Island.  This watch journey began with the simple (for Thomas Prescher) limited edition Nemo Sailor in 2012 and later more complicated and also limited Nemo Captain tourbillon in 2013. For 2014 the two first pieces are totally blown out of the water with the Nemo Sub I, a watch that, while fitting into the overall steampunk collection, is something totally different. 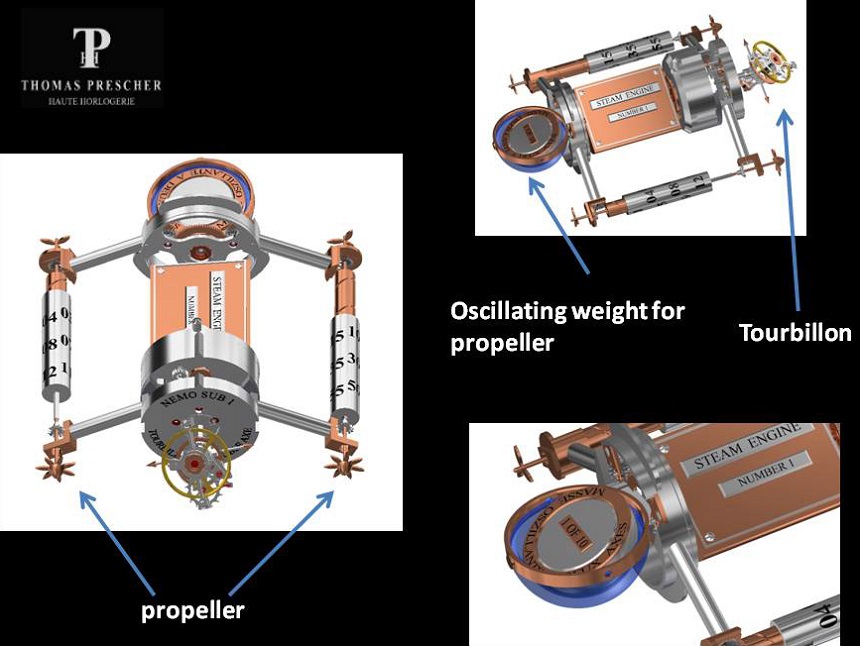 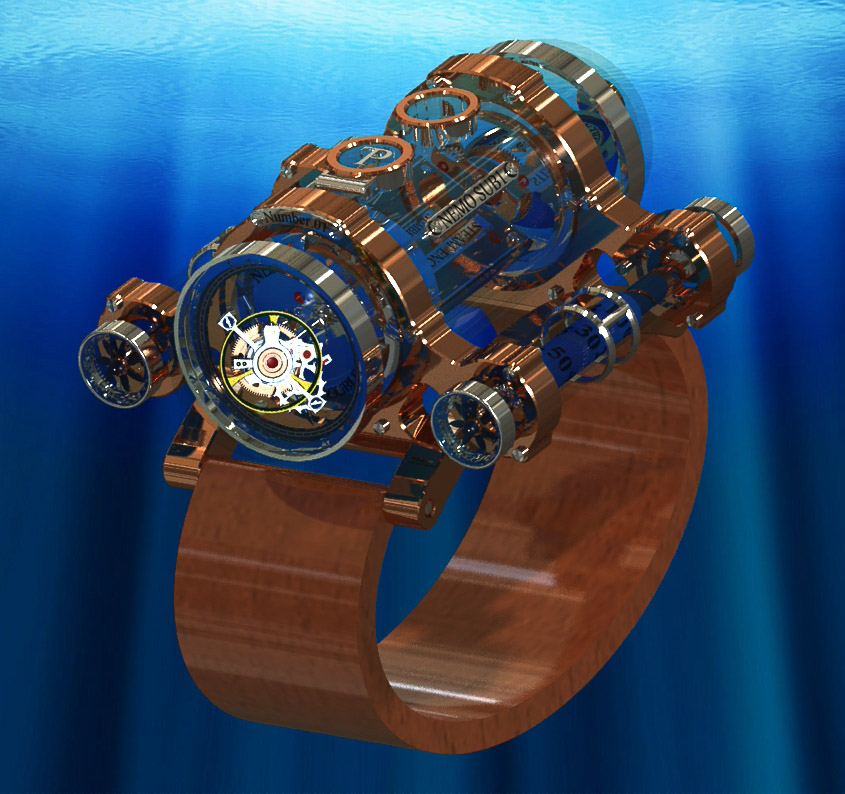 The case has two “side cars” in the form of peripheral tubes also produced from mostly synthetic sapphire crystal. All the metal hardware on the case is 18k red gold as well as palladium. The two smaller peripheral tubes each have two purposes. First they indicate either the hours (left) or minutes (right), and second they contain actual working (spinning) propellers. The side tubes cannot function alone however, as they are connected to the main case via “mystery” gear shafts that go through the brackets that seem to hold the entire assembly together.

The way the hours are minutes are indicated is via a tube that moves up and down as it spins and is read through an indicator window. It is quite an ingenious solution and I’ve never see anything quite like it. How does the watch look on the wrist? Weird of course. It is certainly wearable though, especially because the gold part of the case is meant to wrap around your wrist. Again, not a daily wear, but a very interesting design. Not sure about water resistance though.. you’d think a lot for a watch themed after a fantasy submarine right? 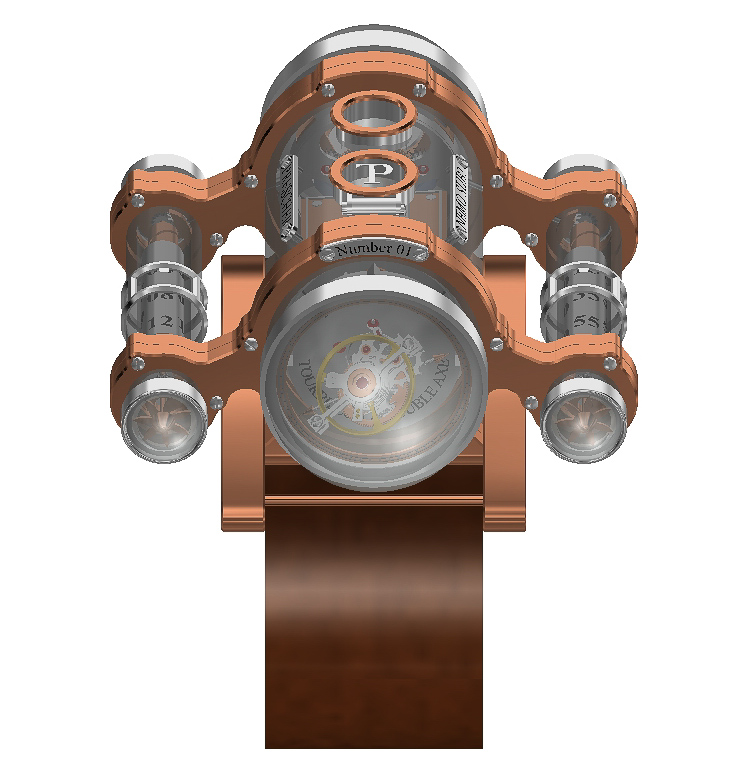 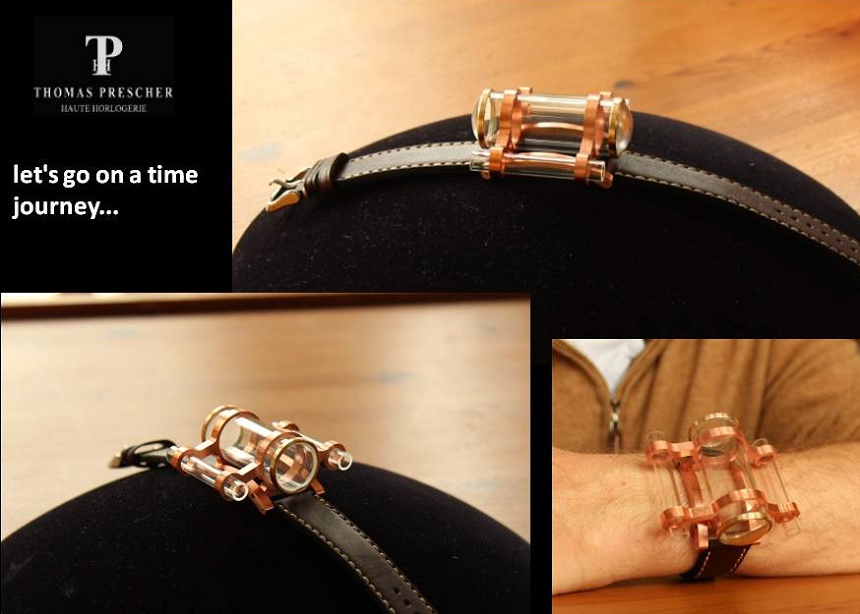 More surprises come in the form of the movement. Entirely made by hand and exclusively by Thomas Prescher himself, the movement is both an automatic and tourbillon-based. Bi-axial tourbillon actually. The tourbillon spins in two directions, with each being in 60 second rotations. The tourbillon is visible through the front of the case and it makes for a pretty awesome view in the entirely see-through case.

The movement is also an automatic, as I mentioned. It does not use a normal rotor, though: Thomas Prescher designed it with a half cylinder versus half circle style rotor and it winds when spinning in both directions. It is toward the middle of the case and again, is viewable in the movement. Thomas Prescher reports about 40 hours of power reserve. A label of “Steam Engine” sits on the movement.