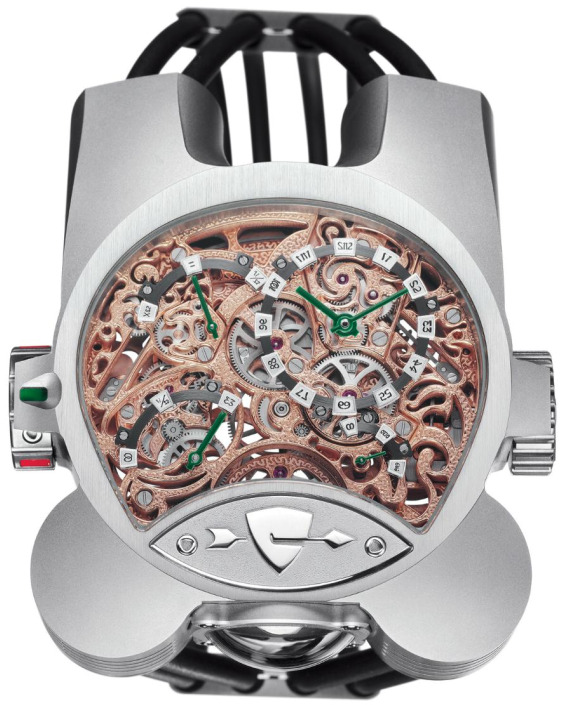 I have been pondering how I should think about this watch for a while. I want to like it, and a big part of me does. Another part of me questions the wisdom of the watch. Is it wearable? Does it makes sense? Would you be considered akin to an alien from outer space for wearing one? The watch is a new piece from the Confrerie Horlogere, a watch making arm of the popular watch movement maker BNB Concept (that is about the declare bankruptcy). The model is the La Clef du Temps Tourbillon, and there will only be 24 of them ever made. Apparently one for each timezone. One of these watches was auctioned off in the Only Watch 2009 watch auction in September for well over $200,000 which was close to its retail price. As a limited edition of just 24 pieces, the watch can justify itself. Still, I feel the need to evaluate it as though they were going to me 24,000 of them.

One this that strikes me as being… well curious to say that least, is that this isn’t the only watch that has this movement. A movement that I should is, is as strange as the watch. Why? Well, because it has that ability to slow down and speed up the clock. Where did you hear about this before? Well it was in the Horus Ultramarinum. Horus of course got their movements from BNB Concept. The only difference is that the  La Clef du Temps watch orients the tourbillon horizontally to stick out through that side window. More of a trick with gears (albeit complex) than it being a new movement. Confrerie Horlogere says that the watch dial is meant to look like a human head or skull. It does, and I can’t help but think that the dial and movement look like brass brains. Which in fact is precisely what the image is meant to represent. Perhaps in the future where this watch may fit in, we will be mere brains in mechanical bodies. 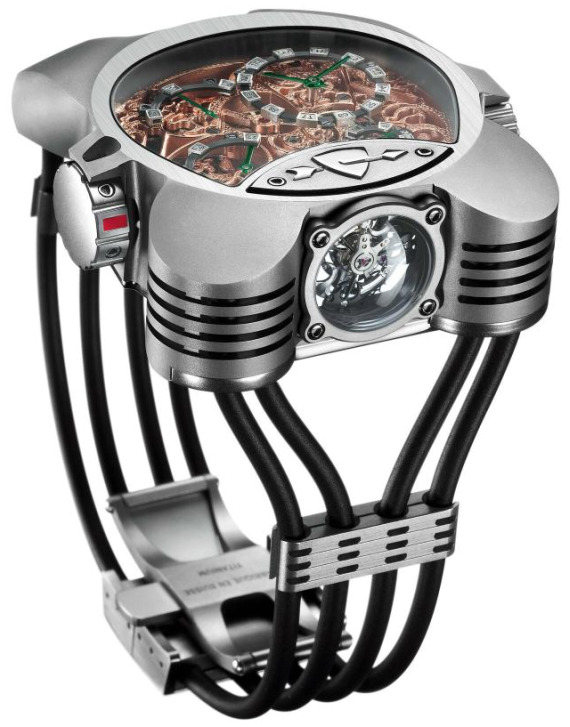 The case is large at 53mm wide and 58mm tall. Almost too massive to wear, but not quite. Wear the watch around and frighted children a bit if you please. The case is made from mostly titanium, and obviously sculpted in a less than ordinary manner. The large image at the lower part of the case around the face is the logo for the Confrerie Horlogere – the shield with an arrow through it. Is that supposed to represent breaking through one’s defenses? Or maybe defying conventions? The case is, interesting to say the least. It is art, pure and simple. Nothing functional about it – the watch is an artistic message. You can’t deny art as being art – you can try to deny a watch being a watch. This item does tell the time, it does strap to your wrist, and it does have a mechanical movement. Still, my brain is having a hard time adjusting to the idea that what I am looking at is a watch.

I am not so much a fan of the strap. Sure it is unique, and very different, but that doesn’t mean it is good. The rubber straps reminds me of scrunchies, or those elastic hair bands that women use when putting their hair in a pony tail. Um… and some men too. It just sorta looks like something you’d buy at a kiosk in a mall. Not particularly luxurious or even pleasant looking. I am trying to imagine it over a wrist. Maybe when I see the thing eventually in person my feelings will change. And while I do have a great amount of respect for the Confrerie Horlegere and the Le Clef du Temps, The bracelet just doesn’t meld with my individual notion of good looks. 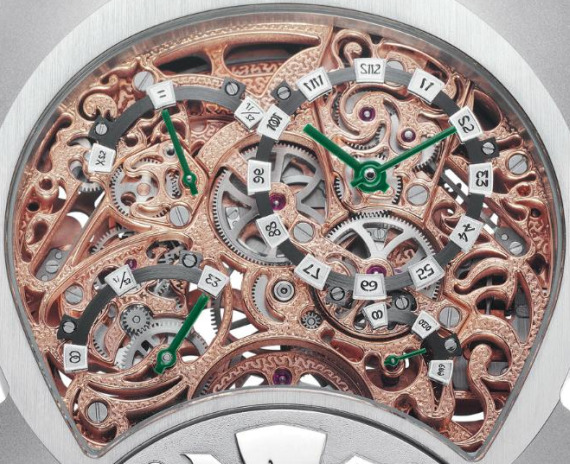 Many people are going to claim that the style of the dial is too different than the style of the case. That is true, but it is also sort of the point. Really depends on who you see wearing the watch I suppose. You wouldn’t think twice if an alien from “Mars Attacks” was wearing it (then again you’d be running in fear.” Though if your father walked into the room wearing this watch, you’d probably point and chuckle.

I don’t feel as though the hands and dials on the face do the intricate look of the movement surface justice. The fine “brain patterning” doesn’t seem to mesh well with thin green hands. I just think the hands could have been done better. They feel like an after thought. On the dial you will find a few functions. A watch face, a retrograde seconds indicator at about 4 o’clock, a power reserve indicator at about 8 o’clock, and a indicator for how fast the watch is running (fast, normal, slow). Another odd thing about the dials are how the numerals are printed. They are mirrored. Like the two hemispheres of the brain? Maybe. Who knows. This concept is interesting in theory, but I personally wouldn’t have left it in the design. But then again, I have to keep reminding myself that this is art dammit! Not just a watch.  So who am I to criticize?

If you look at the lower side of the case you can see the tourbillon cage spinning around. The placement makes sense because as your wrist rests, your can have a nice view of the tourbillon at all times. This is done well. The crown on the right of the watch is used for adjusting the time, and the crown on the left is used to adjust the speed of the time. Mathias Buttet,  founder of the Confrerie Horlogere came up with this idea. He wanted to give people the luxury of speeding up dull moments in life, while slowing down good moments. Who can deny that this is a sweet and pleasant ideal. The concept of symbolically doing this is appealing, but is it $200,000 – $300,000 appealing? Buttet seems to explain that only the ultra wealthy should be able to afford “the luxury of time.” Reading this I just smirk, because no matter how much money you have, you can’t buy time, or spend it for that matter. That is something equally distributed for all of us. Now if the watch could actually speed up and slow down time… we are talking about a good use of a few hundred thousand bucks.