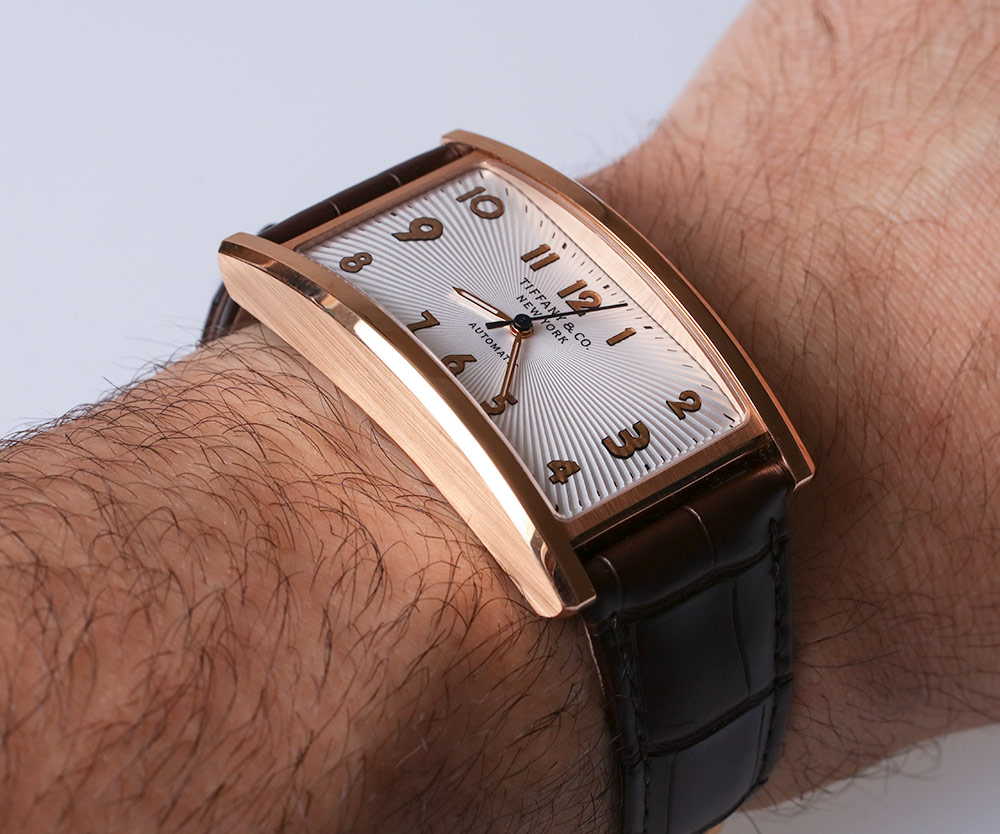 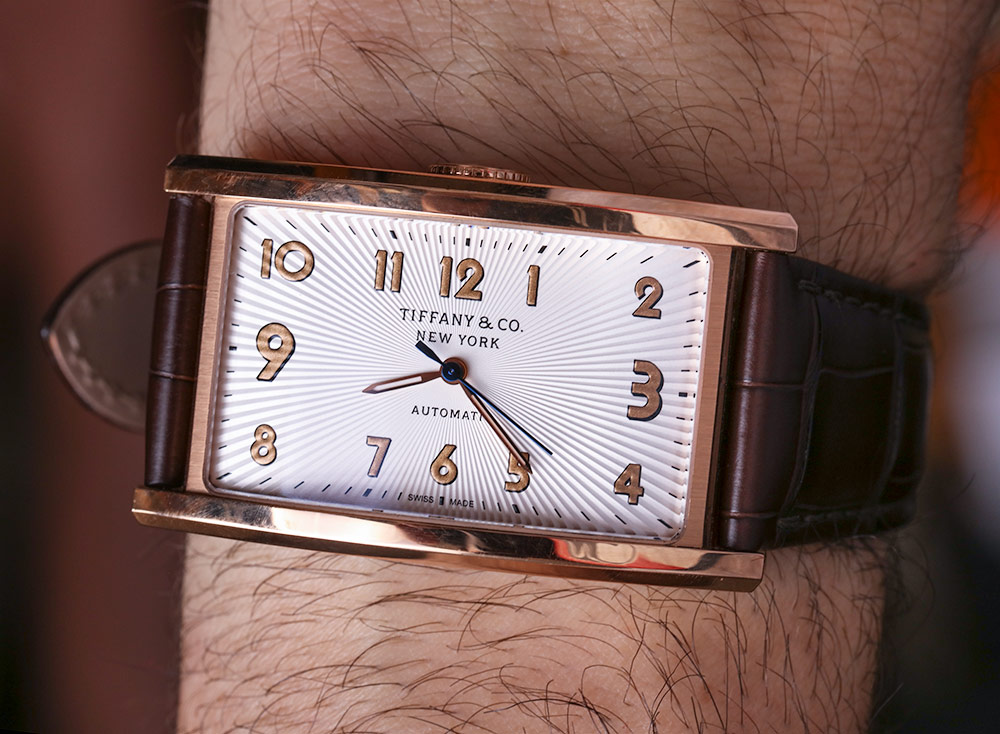 When the first version of the Tiffany & Co. East West watch was released, I felt conflicted. I really appreciated the design and Art Deco aesthetic that Tiffany & Co. embodied but was let down as it was only available in quartz and with a size that was too small for me to realistically wear on a regular basis, at 42mm X 25mm. It can be forgiven, though, as this initial release in 2015 was the same year Tiffany & Co. had “relaunched” their timepiece division. Just a couple of years later, and they must have heard enough opinions similar to mine and released this watch that I am going to review – the Tiffany & Co. East West Automatic watch. With a mechanical automatic movement and a 46.5mm X 27.5mm case, it’s a much better size for a men’s watch of this case shape and style.

I wore the rose gold model, but there’s also a model in steel with a very cool dark blue dial that is priced almost a third of the gold model at $4,750. I think there are definitely more than a few customers for the steel model, especially when considering that you can likely get it at a lower price than that. It’s actually a unique watch in the true sense of that word when you consider not simply the whimsical case and dial design but that it’s from a brand that is associated with American (particularly New York City) luxury. Yes, the watches have the requisite Swiss watchmaking and movement but this is presented as a proud Tiffany & Co. luxury product with “New York” prominently placed on the dial. It also makes for one half  of the best looking his & hers pairings out there, in my opinion. 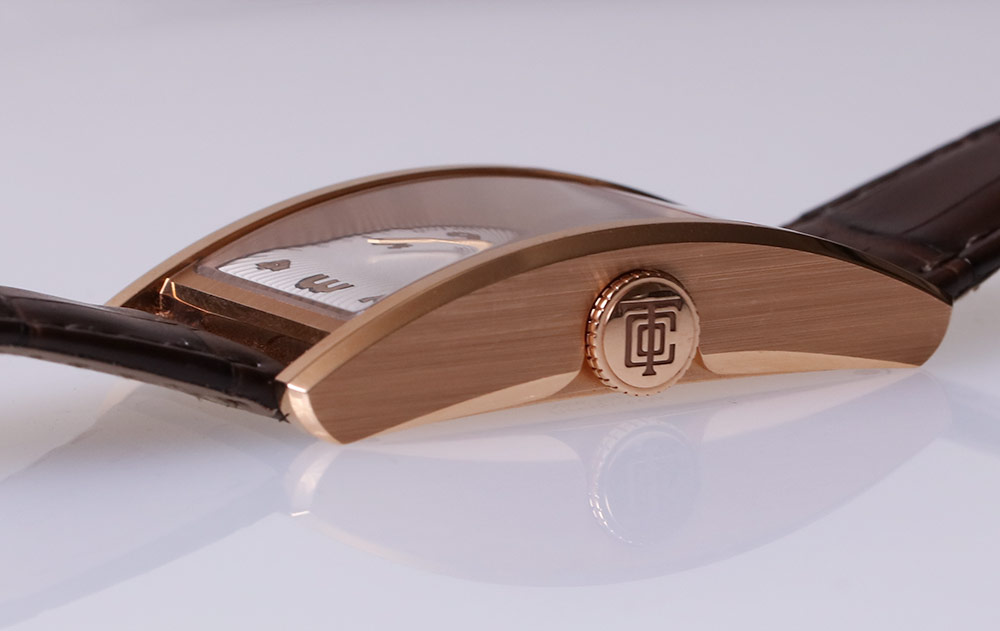 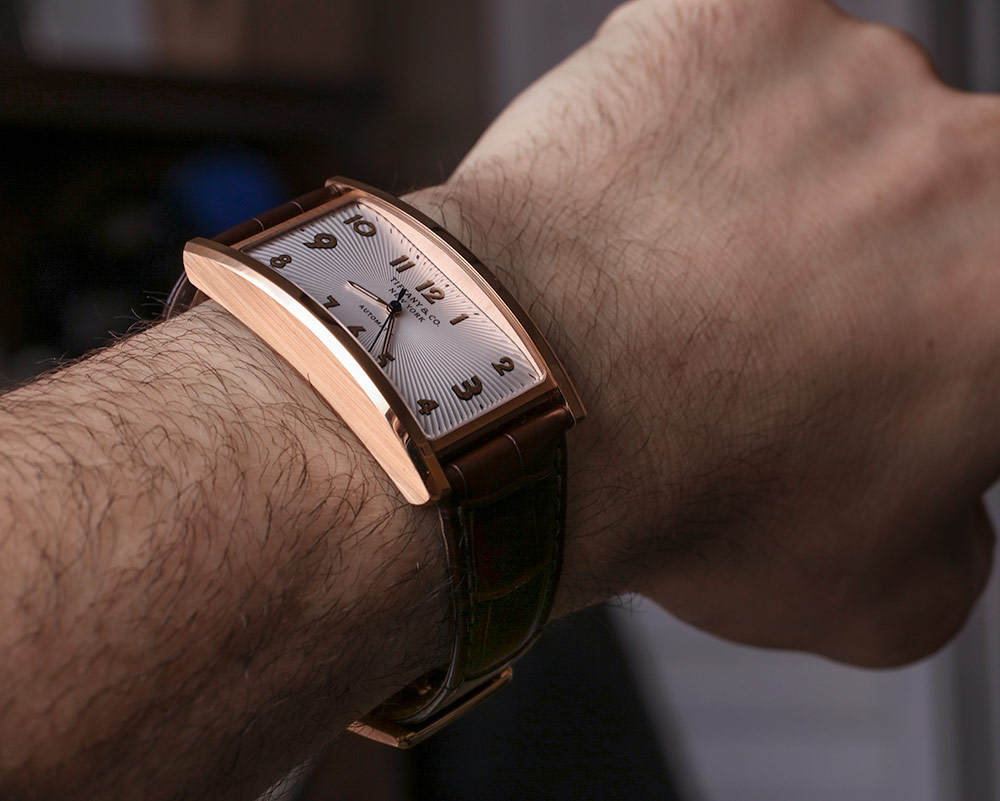 Now, on to the watch itself. As I previously mentioned, this automatic model is sized at 46.5mm tall X 27mm wide. It’s a perfect contemporary size and the curved case looks and feels great and is contextually consistent with the watch’s design. Rectangular watches can often be a little blocky in profile on the wrist, but thankfully the East West achieves a completely graceful profile while being amply masculine due to its size. 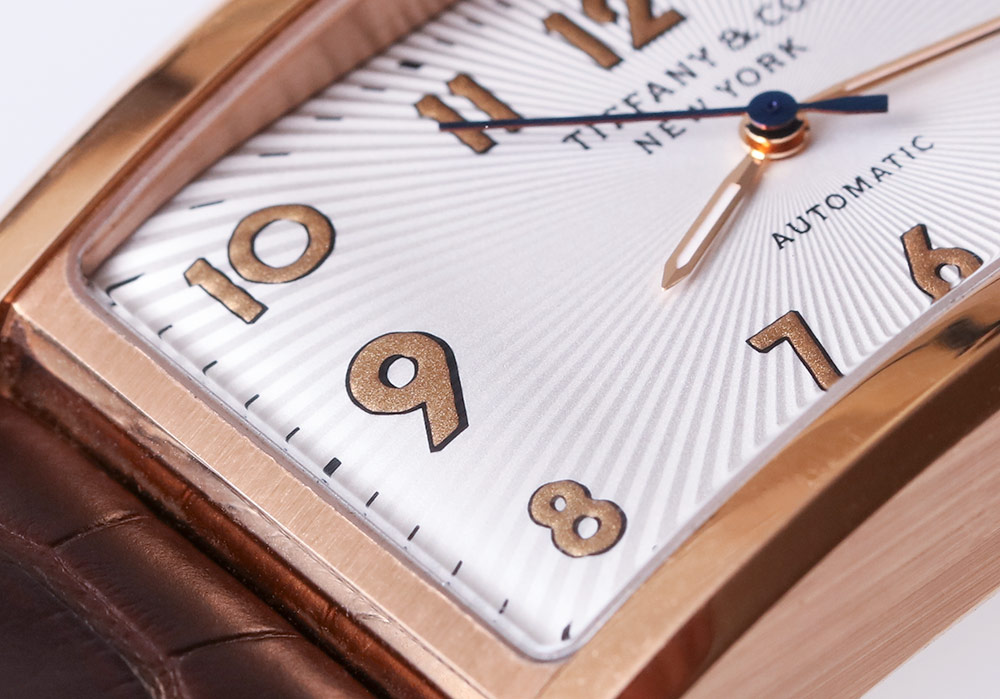 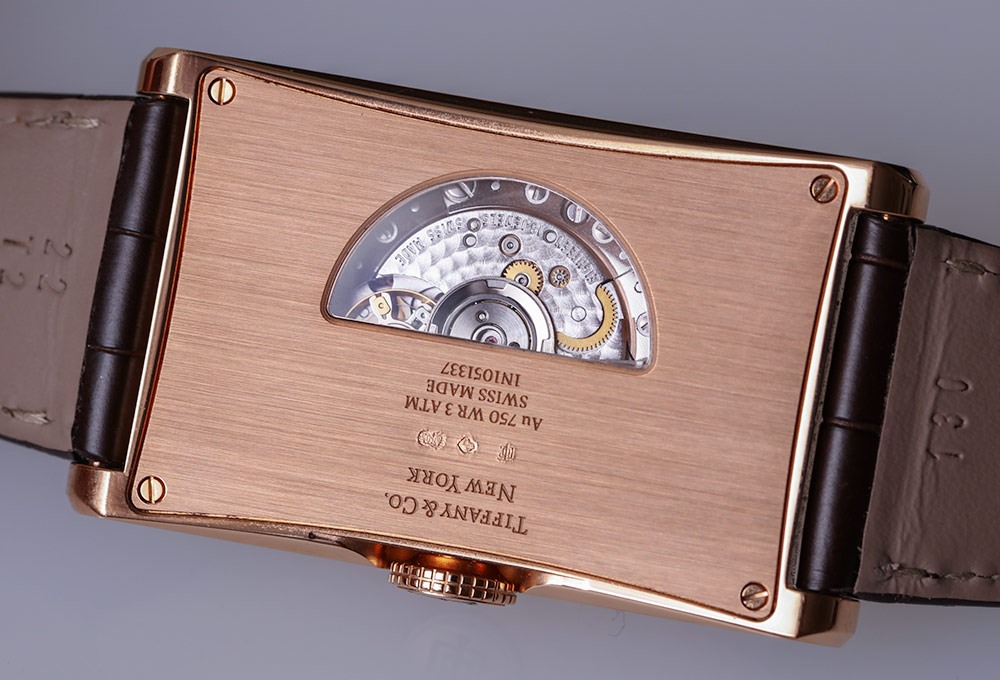 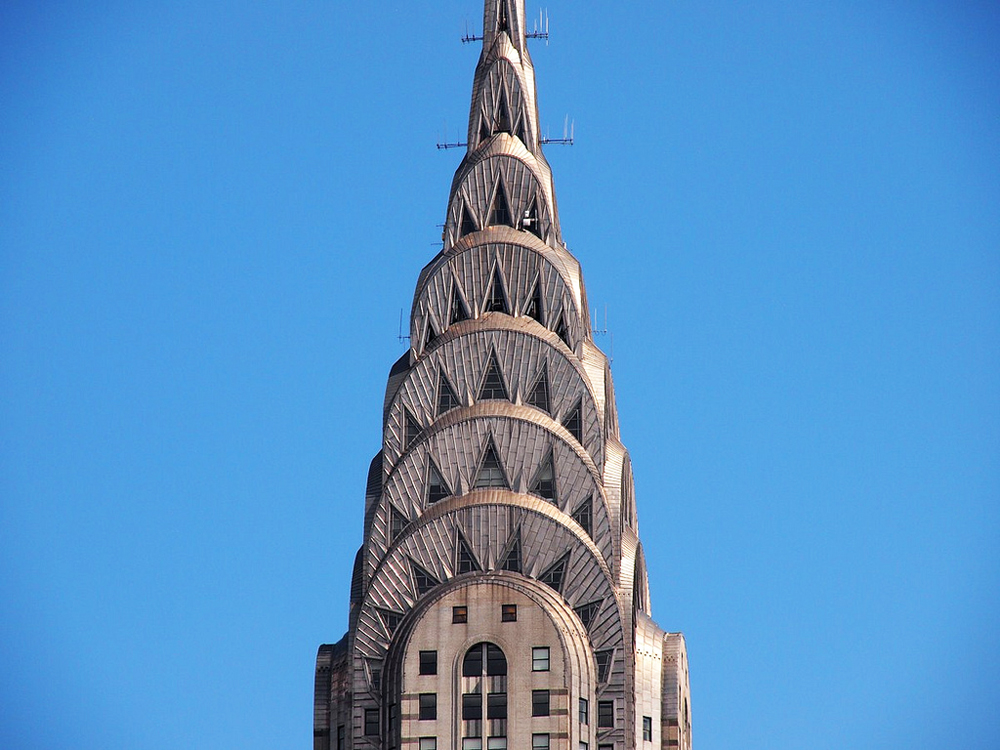 Distinguishing the automatic East West watch from its quartz counterpart is the radial guilloche dial pattern, adding an aesthetic that immediately reminded me of the striped ornamentation on the crown of New York’s Chrysler building. Perhaps it’s my being a New Yorker, but the semi-circular exhibition case back and the curved shape of the case profile are also reminiscent to me of the radiating arches on the crown of the Chrysler building. The Art Deco style and influence is prevalent throughout the watch and its thoughtful and successful execution definitely endeared the piece to me. As native New Yorkers all know, the city is always a part of you and even as I wore this watch in Los Angeles, I felt some distinct yet subtle hometown pride. 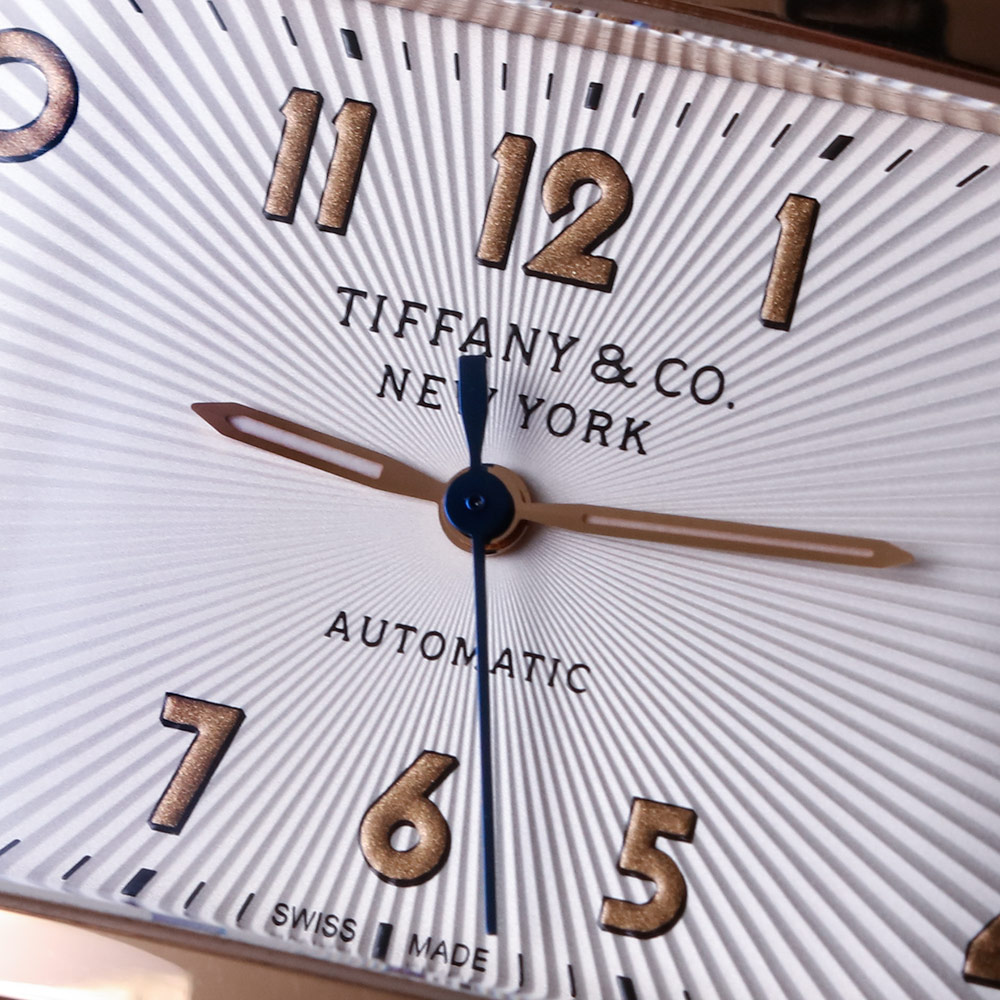 The hour numerals grew on me, though at first I wasn’t really sure how I felt. With time, the big, bold font with shadow-like black outline on the guilloche pattern dial won me over The numerals are done in lacquer with gold poudré (powder) to give it that shimmering, old school look. Really well done, in my opinion. 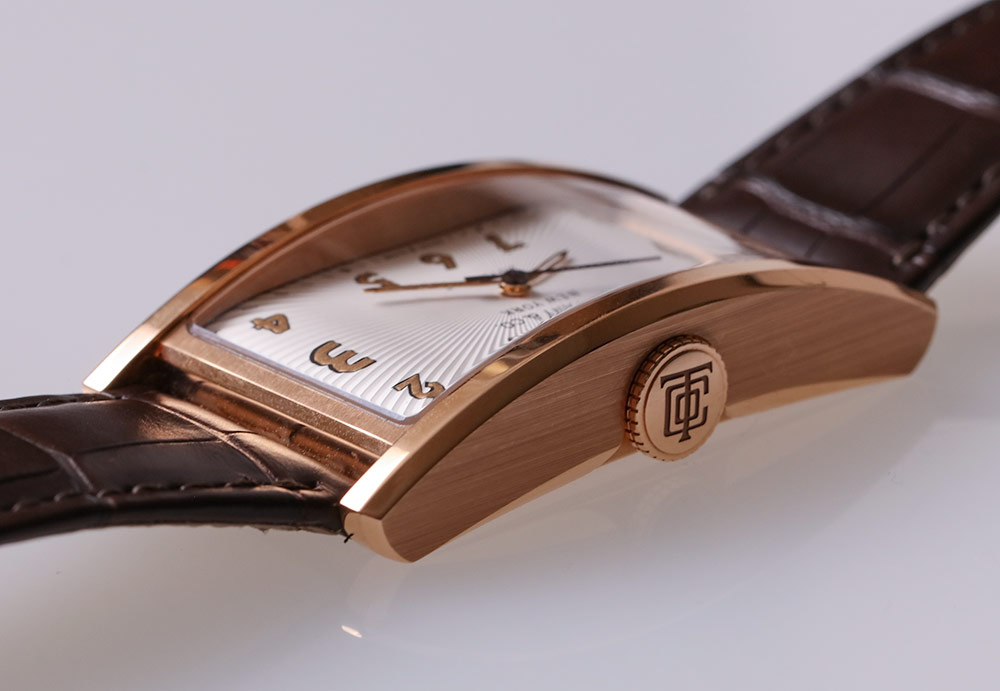 While some people might find getting used to the dial layout a little annoying (obviously there are tons of options for rectangular dress watches out there, so I’d suggest just looking elsewhere if you don’t find the dial charming), I really enjoy telling the time on it. It breaks the monotony of most watches I wear, and reading the time at this 90-degree angle actually felt more practical on more than a few occasions. I was concerned about legibility but even with the less than ideal hands and curved sapphire glass, Tiffany & Co. did well with an AR coating here and I had no issues.