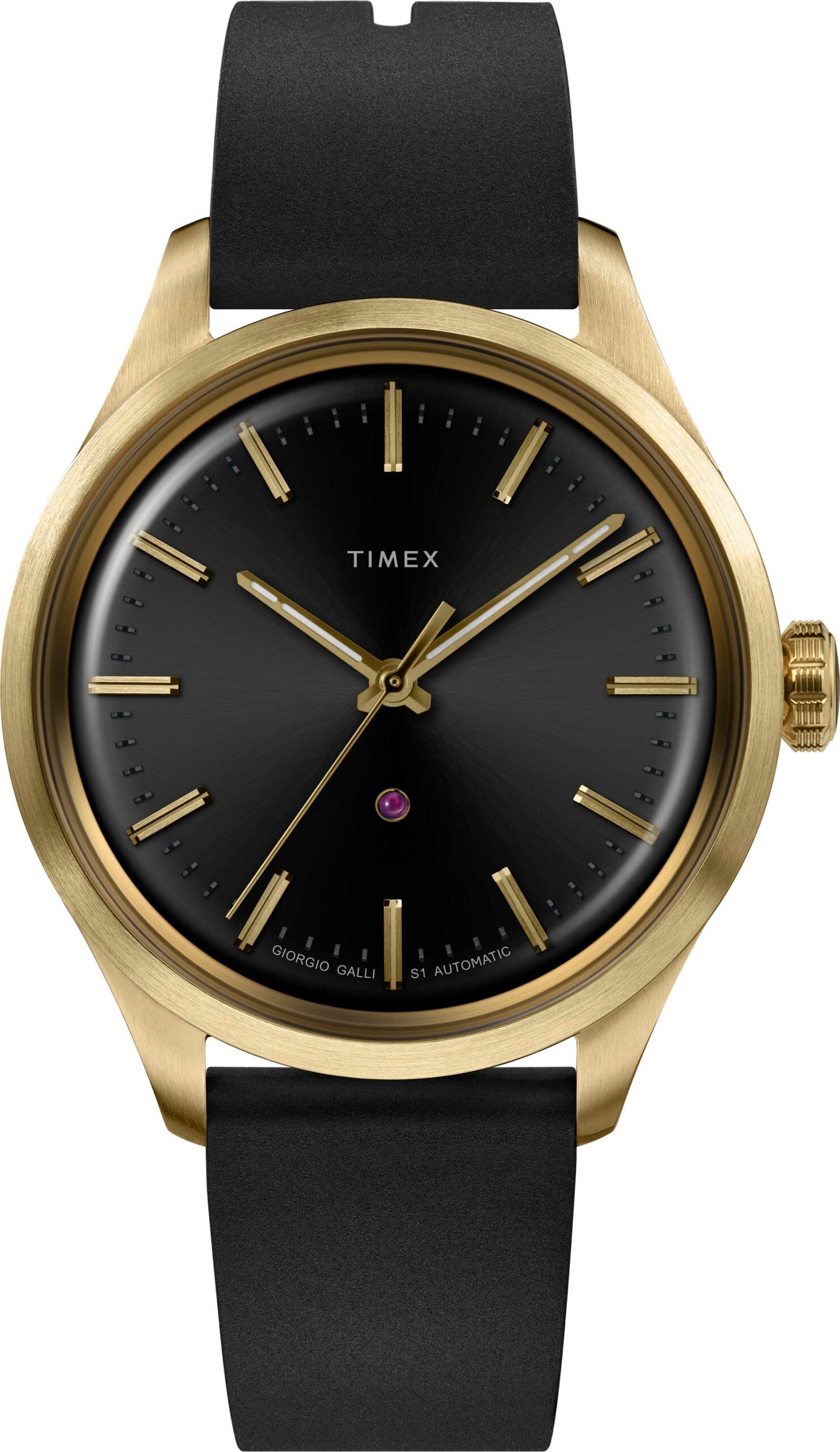 The various S1 watches produced by Timex in collaboration with Italian designer Giorgio Galli have been some of the most popular releases from the brand among enthusiasts over the course of the last few years. The initial collaboration model originally made an appearance in 2019 with a 41mm case, and a smaller 38mm version was added to the lineup at the end of 2021. For some people, the Giorgio Galli S1 (GGS1) changed their perception of what a Timex watch could be, as it represented an entirely more elevated type of timepiece compared to the budget-friendly classics like the Ironman or Weekender collections that are most frequently associated with the brand. That said, all good things must come to an end. After two different case sizes and several different expressions, the Timex GGS1 is going out on a high note with one last release of two models — one in all black and the other as a limited-edition release in black and gold. 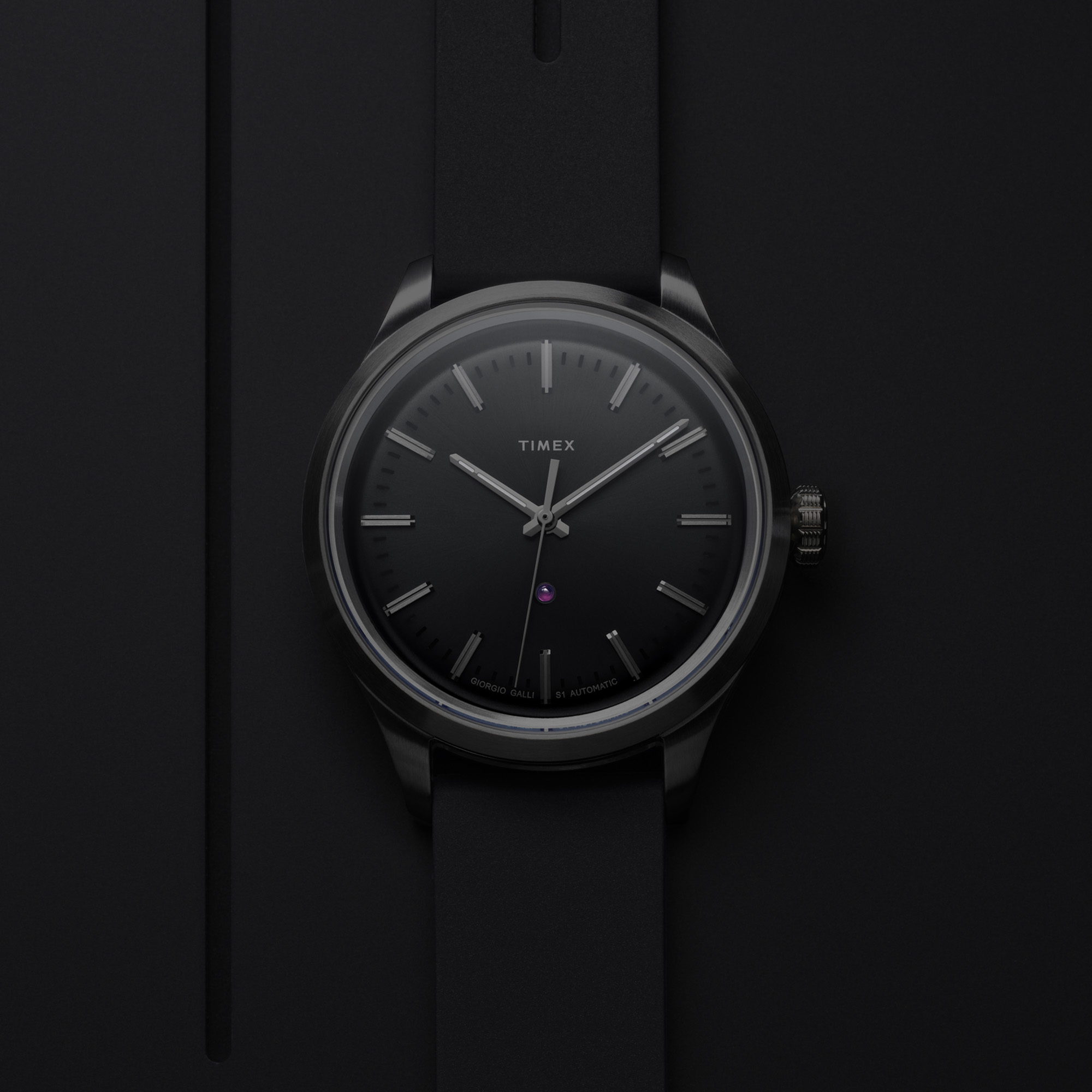 The new Timex Giorgio Galli S1 38mm Automatic watches are based upon the smaller case design of the 38mm models that originally debuted last year, and they feature the same elegant and highly-sculptural skeletonized shape that is made from injection-molded 316L stainless steel. The case of the standard-production model receives a black PVD finish, while the limited-edition version features a gold-tone case with each one numbered out of a total of 500 examples. Like the previous 38mm editions, the new black and gold Timex GGS1 38mm Automatic models feature double curved sapphire crystals with a triple-layer anti-glare coating above their dials, while the reverse side of the watch gets fitted with a screw-down caseback that features a large sapphire display window. A push-pull style winding crown with a black-colored inlay offers access to the movement, and it works together with the caseback to help create 50 meters of water resistance. 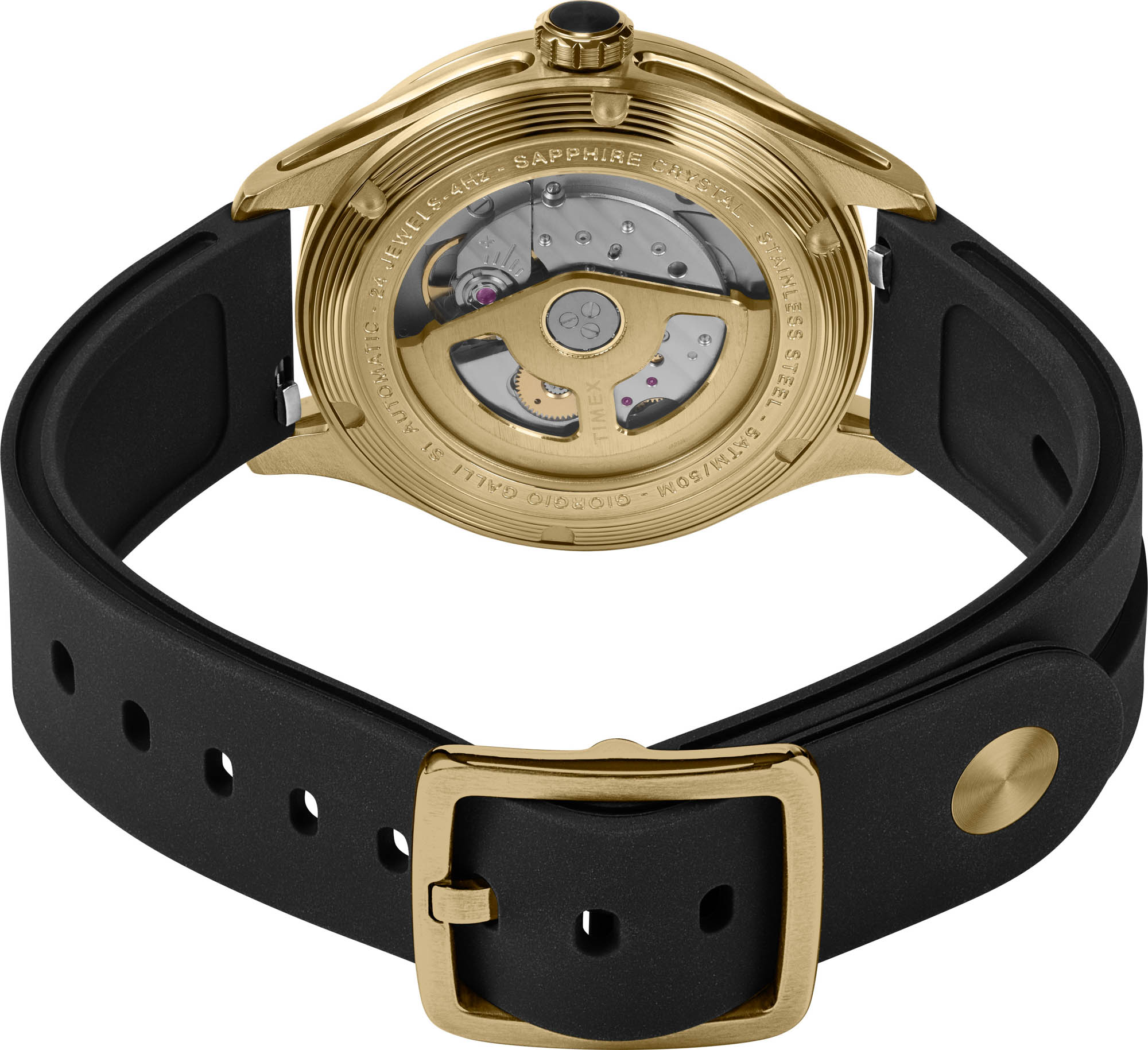 Both versions of the new Timex New Giorgio Galli S1 38mm watches feature glossy black time-only dials with the S1 collection’s signature exposed jewel present below the hands, and the “Timex” name sitting opposite it on the upper half of the dial. While both models feature the same style of tapered baton hands and grooved stick-shaped hour markers, the standard black model features its hands and dial furniture in a tone-on-tone black finish, whereas the limited-edition gold model features these same components in a gold-tone finish to match the rest of its case. Dial text is kept to an absolute minimum, with the words, “Giorgio Galli S1 Automatic” appearing below the minute track at the 6 o’clock location. This minimal approach allows the clean time-only dial to maintain its perfectly symmetrical appearance. 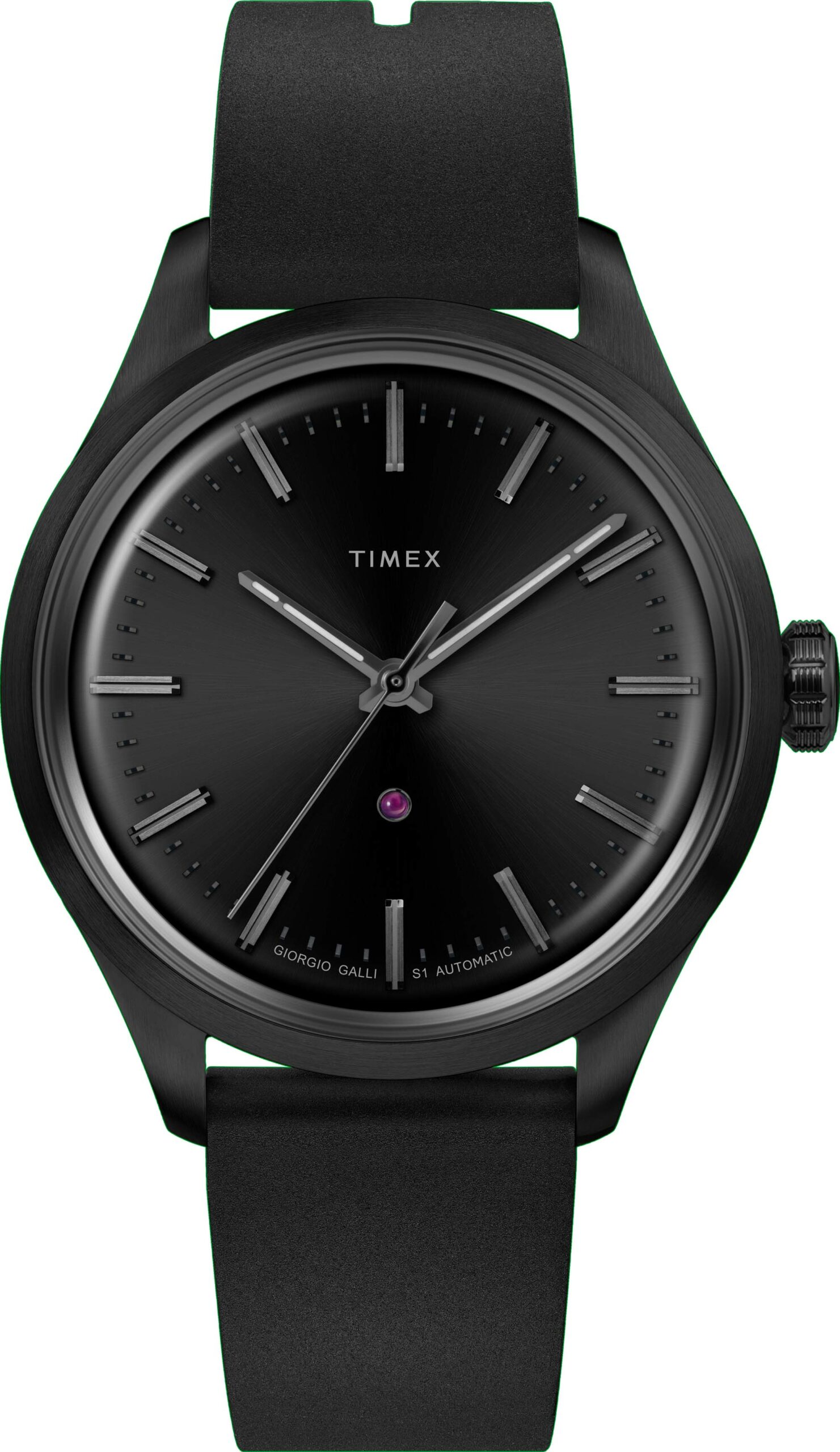 Like previous editions of the Timex S1, the new black and gold GGS1 38mm Automatic watches are powered by the Miyota 9039 automatic movement. A significant step up from the entry-level Cal. 8xxx series calibers that frequently get fitted to the brand’s watches, the Miyota 9039 features linear striping on its plates, and it runs at a frequency of 28,800vph (4 Hz), while offering users a power reserve of approximately 42 hours. Accuracy is rated at -10/+30 seconds per day, and the versions of the movement fitted to this duo of Timex GGS1 models feature custom skeletonized rotors that are colored either gold or black to match their respective cases. Short of opting for something Swiss, this is about as good as it gets for movements at this price point. Due to the widespread use of Miyota calibers, keeping the GGS1 38mm Automatic watches running for the long haul should be both an easy and affordable task.

Both versions of the new Giorgio Galli S1 38mm Automatic are fitted with black versions of the same strap that can be found on the other 38mm models that were released in 2021. The strap material is a highly durable synthetic rubber, and the ends attach to the watch with quick-release springbars for easy and tool-free strap changes. Although the two opposite sides of the strap connect with a thick stainless steel tang buckle that is matched to the finish of the case, the excess end of the strap is held in place using a rivet keeper that locks within the groove located on the outside of the strap, rather than needing to rely on separate keepers to hold it in place. The overall design is quite innovative, and it is somewhat of a mix between a traditional pin buckle and the rubber strap for the Apple Watch. For anyone who plans to switch things up, however, the standard lugs can accept virtually any standard 18mm strap, so compatible options are more-or-less endless. 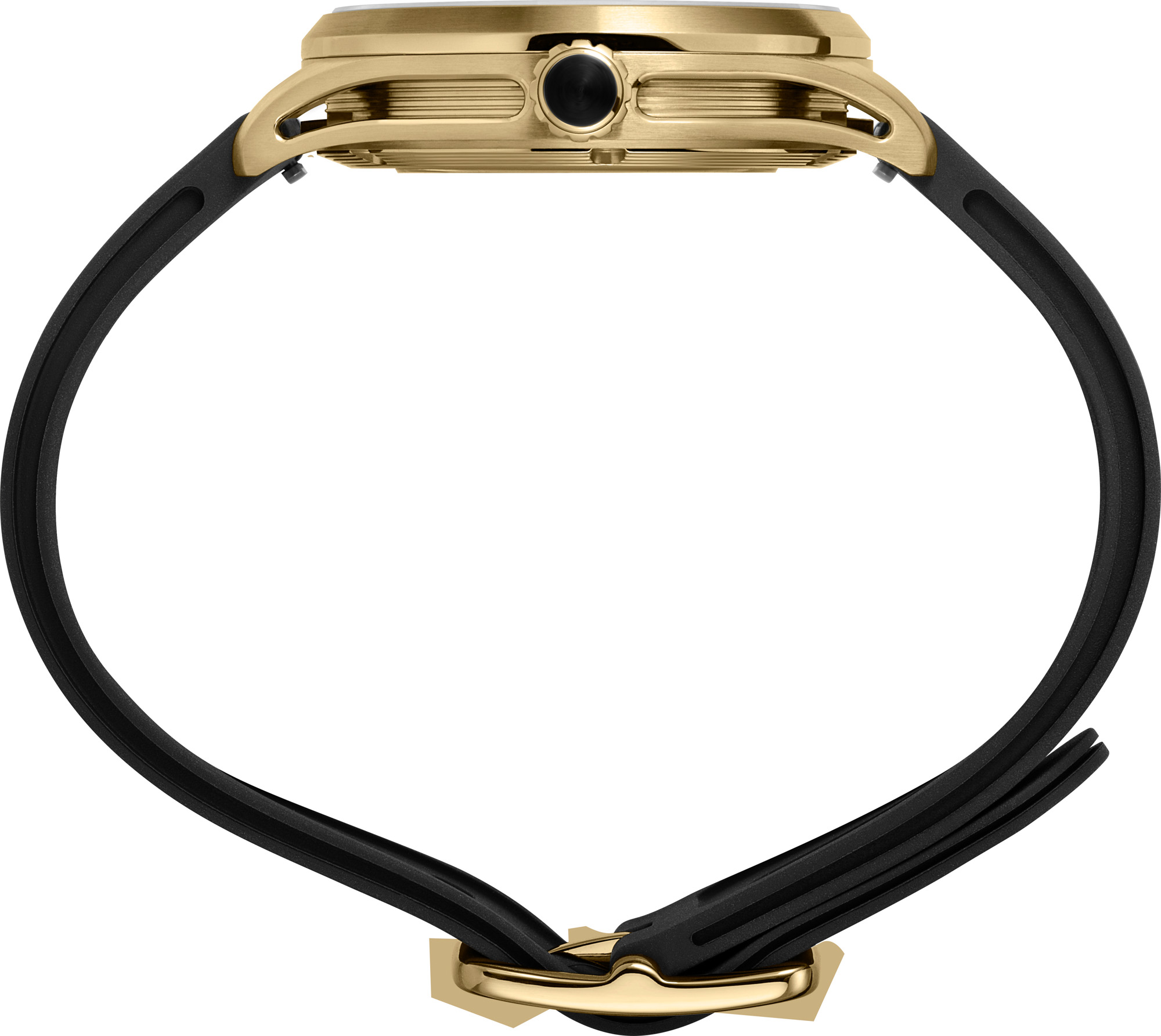 This pair of black and gold GGS1 models represents the final swan song for the Timex Giorgio Galli S1 series. This duo of watches will be the last S1 models that Timex will produce before Giorgio Galli and Timex turn their sights to its successor: the S2. While the next generation of watches from this successful collaboration is slated to have a Swiss movement, the latest black and gold 38mm Automatic models represent the final expression of the original pioneering design that debuted in a larger format back in 2019. With an official retail price of $475 USD for the all-black version or $500 USD for the limited-edition gold model, these new Timex GGS1 watches are priced at a $25-$50 premium compared to their plain stainless steel counterparts that debuted last year, and they represent the final page in the first chapter of this ongoing collaboration between Giorgio Galli and Timex. For more information, please visit the brand’s website.