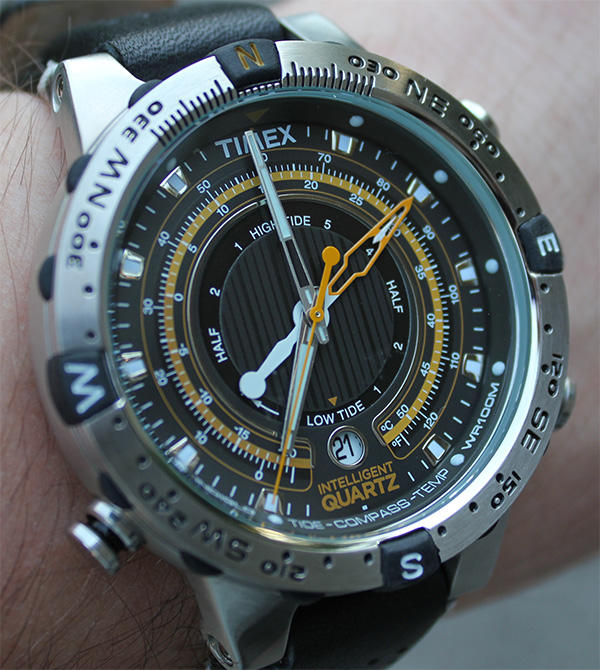 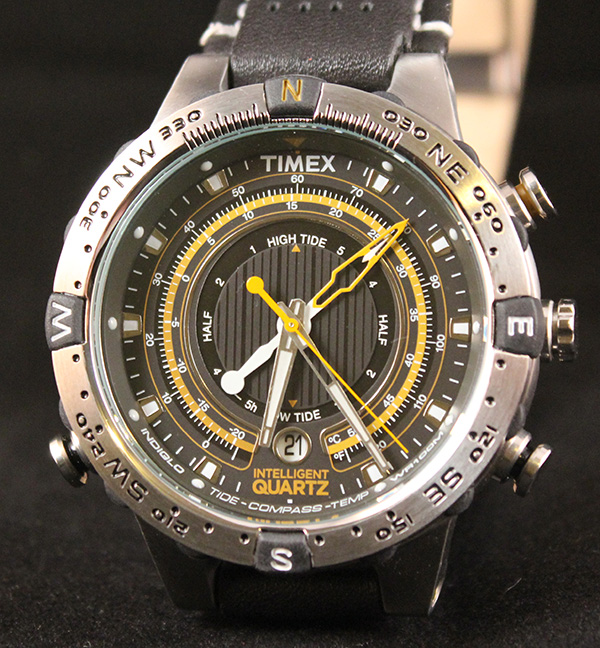 We don’t typically focus on quartz watches as often as their mechanical counterparts but there are certain instances such as when a quartz movement can offer something not possible or adds functionality not realistically affordable otherwise. Timex is probably best known for their ubiquitous Ironman athletic watches but some of their most interesting new releases come from the Intelligent Quartz, or IQ, line. These models offer something above and beyond that of a typical quartz watch while keeping prices very affordable. Currently we’re looking at two very different watches in that same line, the Tide Temp Compass and the Perpetual Calendar.

The Tide Temp Compass looks expectedly outdoorsy. The adventure watch blends vintage and modern styling into a functional and aesthetically pleasing design. While this 45mm tool watch certainly doesn’t hide what it’s going for, it also doesn’t broadcast it to the point where you are unable to accessorize with anything other than a survival knife or paracord. This watch could easily be worn to the office but I’d leave it at home if a tie is involved. 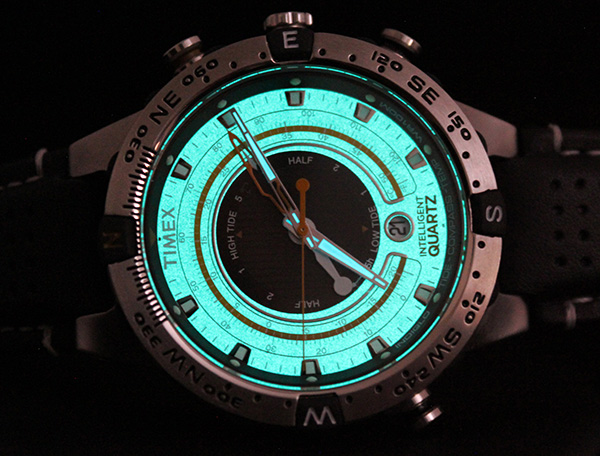 The dial may look complicated initially but it’s really laid out quite effectively for the functions it is capable of. By name alone it’s pretty safe to assume that this watch has a tide tracker, temperature sensor, and compass. In that it does not disappoint. Each function has its own pusher that keeps operation simple once you remember which is which since they are not labeled. With the amount of text that is on the dial, a little clue would have been welcome. Each function utilizes a single central hand to display the requested information. This hand is suitably sized for the case and role while being easy to differentiate from the separate time telling hands. Upon activation, the Tide and Temp both zero this function hand before approaching their mark unless coming from the compass function. A beep indicates the start of compass functionality which does time out to conserve battery life as the hand continues to move while the watch is turning. A smooth bidirectional bezel assists with orienteering. Depressing the crown activates the watch’s Indiglo backlight and a small window at six o’clock displays the date. 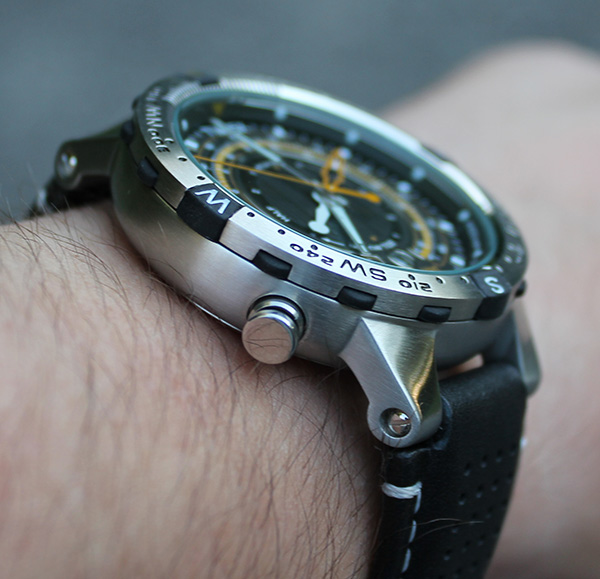 The case design is actually one of my favorite aspects of the Timex Tide Temp Compass. The lugs are visually interesting and the watch is extremely comfortable on the wrist. The case is fairly thick at 13mm and has a reassuring heft but doesn’t weigh you down. Despite its oceanic theme, the lack of a screw-down crown and the inclusion of a snap-on caseback mean this watch should stay above water. There are a number of colors and strap options including a stainless bracelet. It’s interesting how much the character can change from vintage-inspired to futuristic by these options. This perforated leather strap is heavily padded and 70’s in style. Most of the stainless case is evenly brushed with the exception of in between the lugs where it is more difficult for a machine to finish. This is understandable given the cost and it actually isn’t too obvious without close inspection. The cost saving is also found in the inclusion of a mineral crystal instead of sapphire. 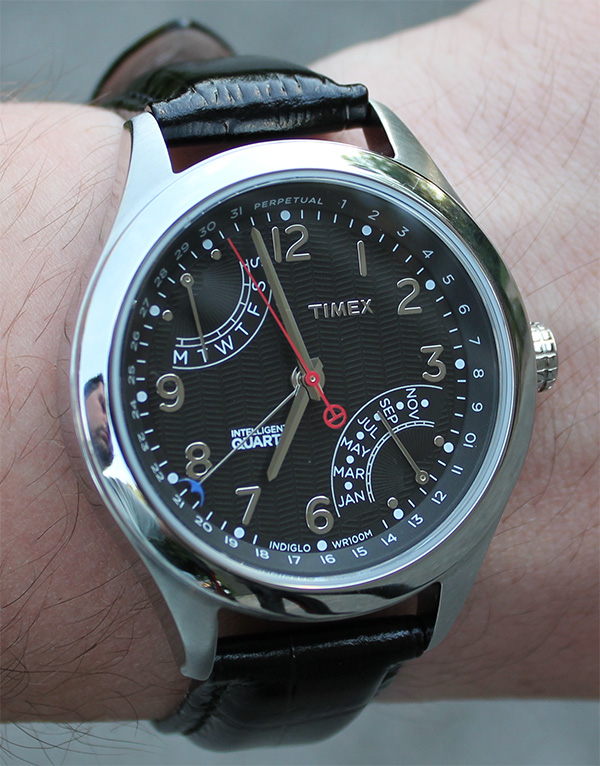 If you’re a watch lover you probably have at least one friend or relative who wears a watch yet doesn’t know or care enough to correct the date for varying month lengths. And if you’re anything like me, this drives you crazy. I also need my dive bezel to line up with twelve o’clock… but I might take this to an extreme. However, if this does sound at least a little familiar then the Timex Perpetual Calendar might be a perfect gift for your forgetful acquaintance. The luxury of not having to correct for varying month lengths and leap days is most often prohibitively expensive for many watch lovers. At the expense of forgoing the mechanical majesty of those costly perpetual calendars, Timex has pre-programmed theirs to accurately track the day, date, and month to the year 2100. The design is rather standard, yet balanced, with a central date hand and opposing day/date sub registers. The dial has a herringbone pattern which does help add depth to the otherwise uninspired design. Hints of color come in the form of a red central seconds hand (with Timex ‘T’ counterweight) and blue tip of the date hand. The unsigned crown also activates a blue Indiglo backlight. The 42mm case is largely polished except for the top of the lugs which add some nice contrast. 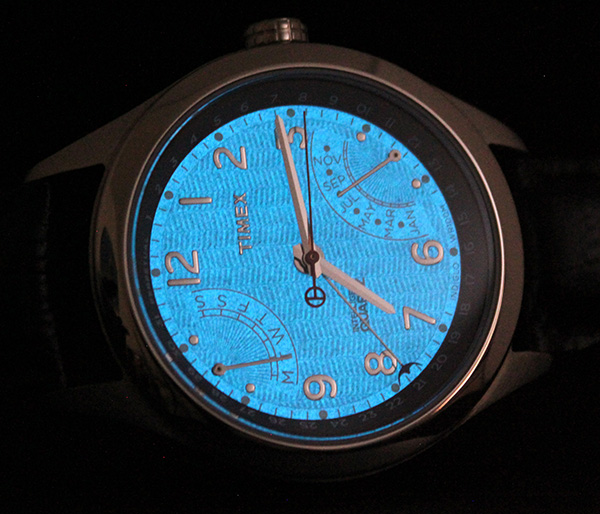 Both the Tide Temp Compass and Perpetual Calendar offer additional functionality over a typical low-cost quartz watch but something does feel off about each one. It’s almost as if they are both trying a little bit too hard to be something they are not. Despite aiming to be a nautical adventure watch, the Tide Temp Compass isn’t built for true aquatic life. Likewise, the Perpetual Calendar tries to look the part of a sophisticated dress watch but the dial appears cluttered and more casual when a closer look is taken. These aspects can be overlooked given the sub-$200 price points assuming you like the styles. The Timex Intelligent Quartz Tide Temp Compass and Perpetual Calendar watches are available now for $170-200 USD and $150-175 USD respectively.