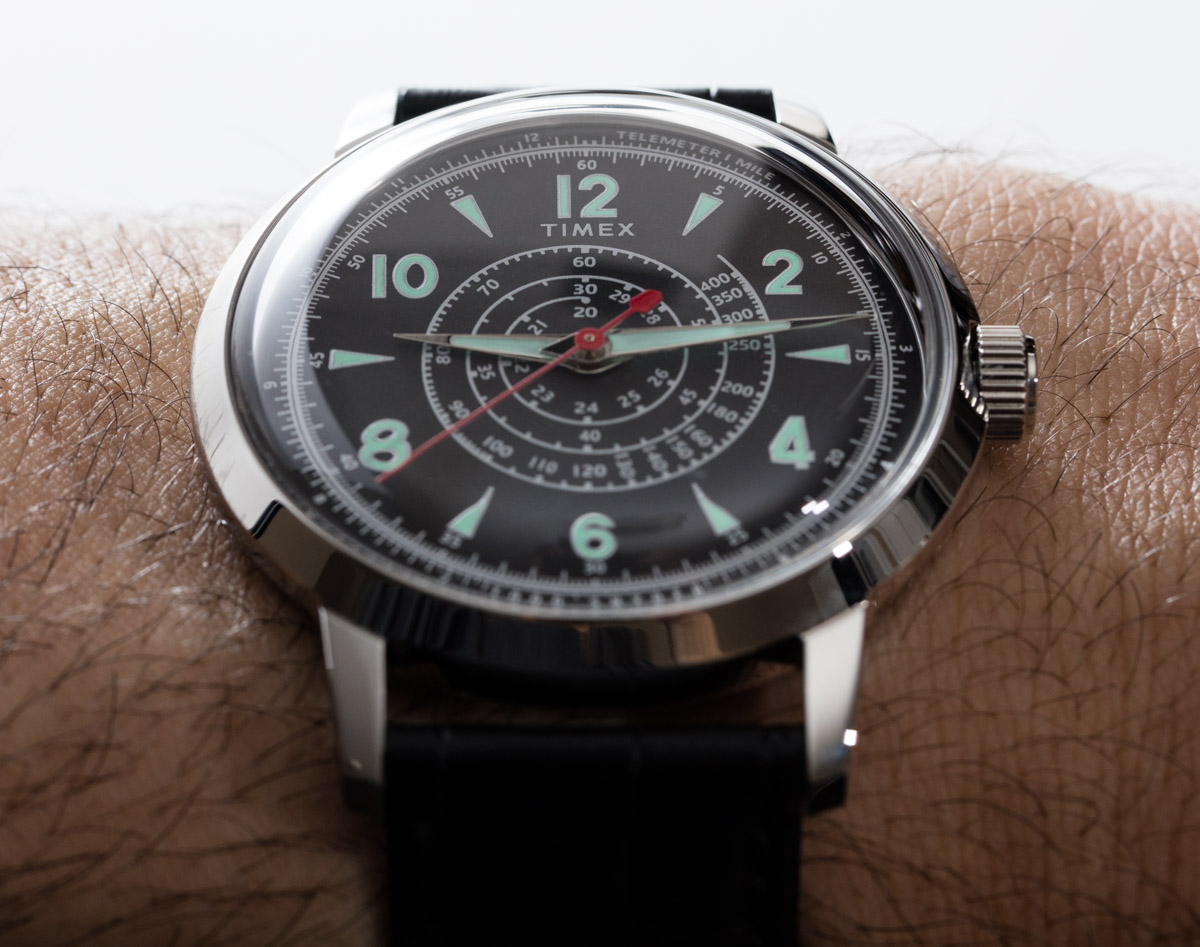 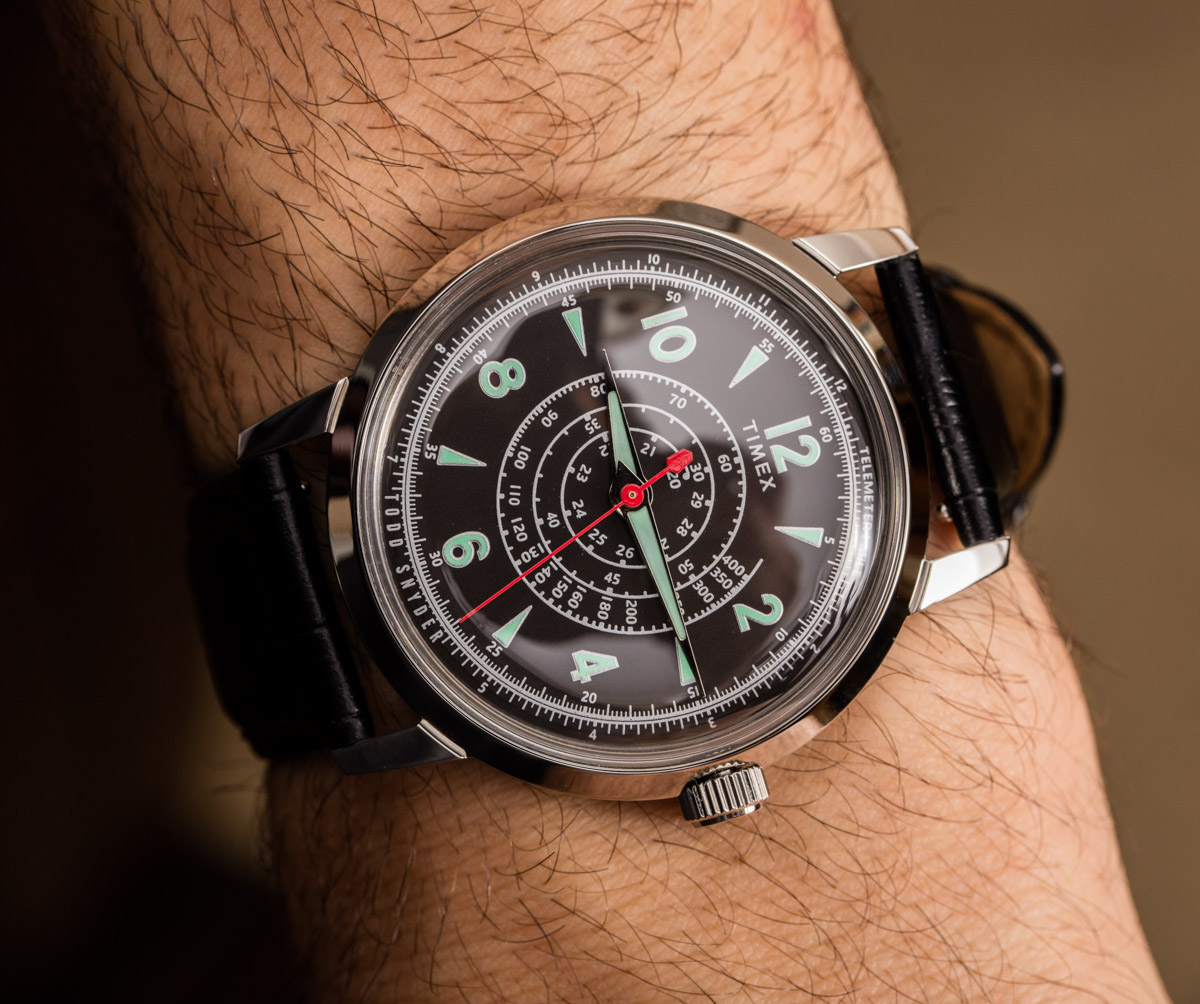 The Timex and Todd Snyder watch brand + fashion label relationship continues with the release of the Beekman watch that comes in two styles, being the black dial reference TW2T19500 and the cream dial TW2T19600. This isn’t necessarily a watch for watch collectors, but it is a fashion watch that suggests the lifestyle of vintage watch collecting. aBlogtoWatch has often been asked to cover more affordable timepieces and this review of the Timex + Todd Snyder Beekman is part of the larger response to that request. At just under $160, you get a fashion-forward (well, actually fashion-backwards if you want to be technical) timepiece with the DNA of mid-century watches, Timex as a brand, and a look which is at the very least, fun. 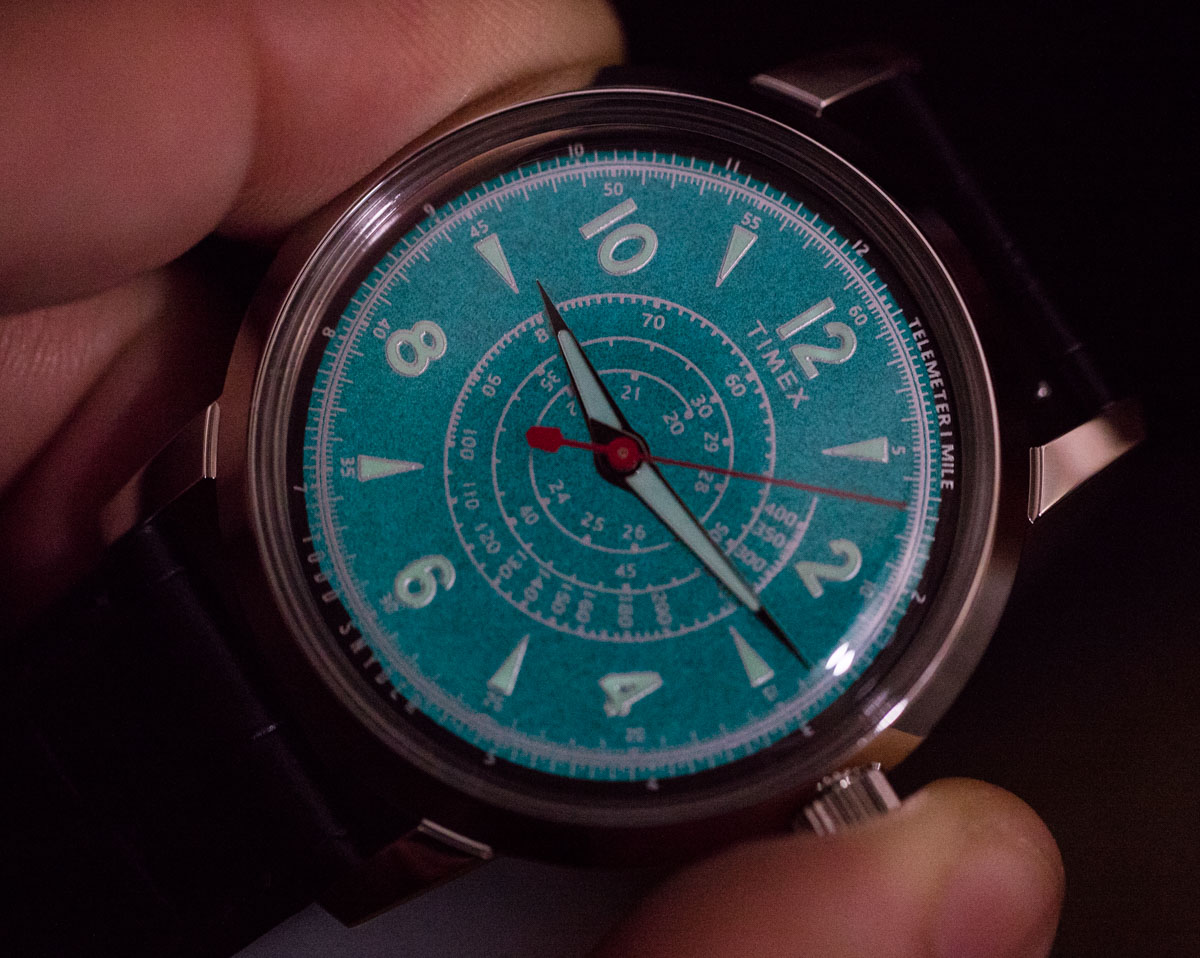 Todd Snyder’s work with Timex sounds really fun. Mr. Snyder gets to look through Timex’s archives and can ask them to remake pretty much anything they have made in the past and include any design changes which he feels will help modernize the styles. Most of the modernization comes in with the movement as well as the case size (which is larger today than it would have been in the past). The Beekman is directly inspired by an older Timex watch, which I have viewed myself in their archives. This is a 1940s-1950s racing-style watch dial with a snailed tachymeter scale in the center and a telemeter scale on the the periphery. These scales today are almost entirely fashion-focused with no real functional intent. That fact might irritate some watch lovers, but then again statistically speaking, they wouldn’t use these scales if they were part of a chronograph display anyways.

That’s right, for tachymeter and telemeter scales to be properly read, one needs to combine them with a central chronograph seconds hand. Each of these is based upon starting the chronograph at a particular instance, measuring time it takes for an object to travel a certain distance (which requires some independent source of that information) and then manually stopping the chronograph. The reading on the dial is taken where the chronograph hand stops. So what happens if you include these scales on a watch with no chronograph, as you have here?

The simple answer is that one considers these scales to be an attractive addition to the watch dial in order to make it look more interesting or cool. Timex actually suggests an “alternative” to using the scales, which you might find a bit amusing (as I did). Essentially, they recommend to wait until the seconds hand from the main time hits the 60 minute mark and then pulling out the crown at the precise second. This will stop the movement and thus stop the seconds hand in position. When you want to start a tachymeter reading (for example) you then need to press the crown back in – track the intended distance an object travels – and then pull out the crown again. Not only is this process not particularly convenient, but it is also silly because it would interrupt normal operation of the time. Thus, each time you decided to “use” the tachymeter or telemeter scale, you’d also need to readjust the time. I think it is safe to say that this is a watch to get for the looks alone.

Timex hides a welcome piece of functionality in the INIDGLO illumination system that lights up the entire dial in a pleasant electric blue when the crown is pushed in. This is in addition to the modest luminant on the dial. Both the cream (brown) and black Beekman watch have really good legibility and I think the low-price, good looks, and fashionable versatility make up for the funny business watches like this can play with complications that might look neat but aren’t actually meant for most human operation.

Inside the Timex + Todd Snyder Beekman watch is an in-house made Timex quartz movement that features just the time (no date) and the INDIGLO feature. One additional feature that would have made the entire watch concept make a bit more sense would have been to include (at the least) a “zero-reset” feature which returned the seconds hand to the “0” position when the crown is pulled out. That would at least advance the “story” of the watch, as related to the scales on the dial. 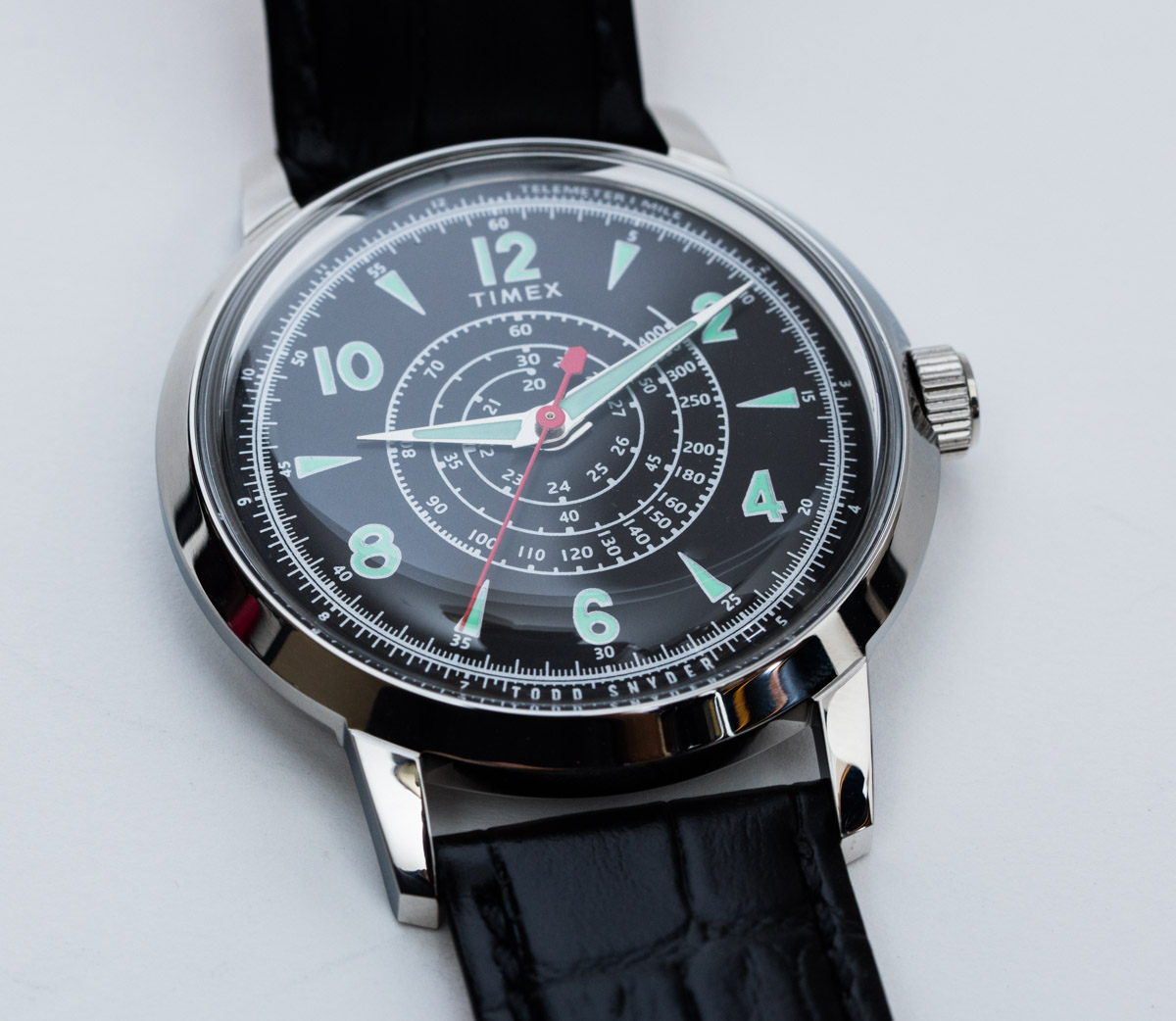 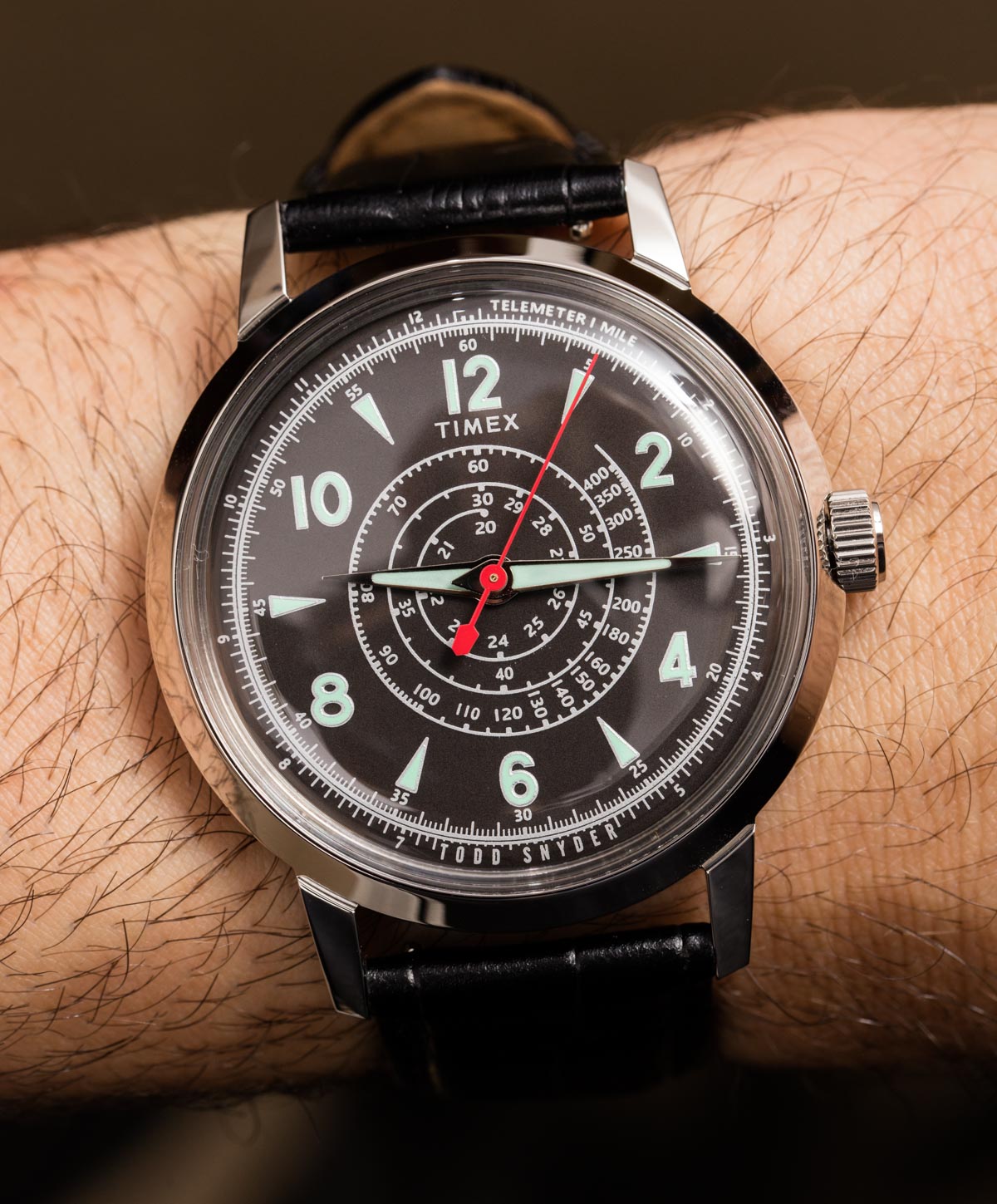 On the wrist, Timex continues its appreciation for the 40mm wide size produced here in polished steel with a domed vintage-style acrylic crystal. Note the use of quick-release spring bars on the straps, which are intended to make it easy to swap out straps at will (the straps are 20mm wide). The watch case is 12mm thick, with an approximately 48mm lug-to-lug distance, and 30m of water resistance.

As a fashion piece the Timex + Todd Snyder Beekman collection is an excellent example of a good, familiar look at a very reasonable price. It’s not the look for everyone, but it does follow an aesthetic which has been popular for years and has examples in watches ranging from Baume & Mercier to Breguet and Gallet. As a tool watch lover I need to put in effort to ignore the fact that the watch is an imperfect tool given the “wonky” functionality of the tachymeter and telemeter scales. I do applaud Timex for at least trying to come up with a functional work-around, meaning that they are both aware of how the dial is supposed to work (in a traditional sense) and take steps to address it. For those more horologically-inclined, the Timex + Todd Snyder Beekman is a very effective and low-cost way of sampling this type of retro racing watch look on the wrist – allowing enthusiasts to determine if they enjoy the style enough to pay for something similar, but with an actual chronograph complication. Attached to the watch is either a black or brown alligator-print leather strap. My pick is the black-dialed model as seen in this review. Price for both the reference TW2T19500 or TW2T19600 Timex + Todd Snyder Beekman watches is $158 USD. toddsnyder.com

Necessary Data
>Brand: Timex
>Model: Timex + Todd Snyder Beekman references TW2T19500 and TW2T19600
>Price: $158 USD
>Size: 40mm wide, 12mm thick, and 48mm lug-to-lug distance
>When reviewer personally wear it: When wanting an inexpensive and fun way to get the look of a snailed tachymeter style vintage racing watch.
>Friend we’d recommend it to first: Fan of vintage-style watch aesthetics interested in this look, seeking convenience and comfort, who doesn’t want to worry much.
>Best characteristic of watch: Attractive dial design and excellent implementation of INDIGLO system. Comfortable on the wrist and doesn’t actually have too much competition with this style at this price.
>Worst characteristic of watch: Without a chronograph the tachymeter and telemeter scales are basically cosmetic additions to this product. Could benefit from a bit more AR-coating on the crystal to reduce glare.