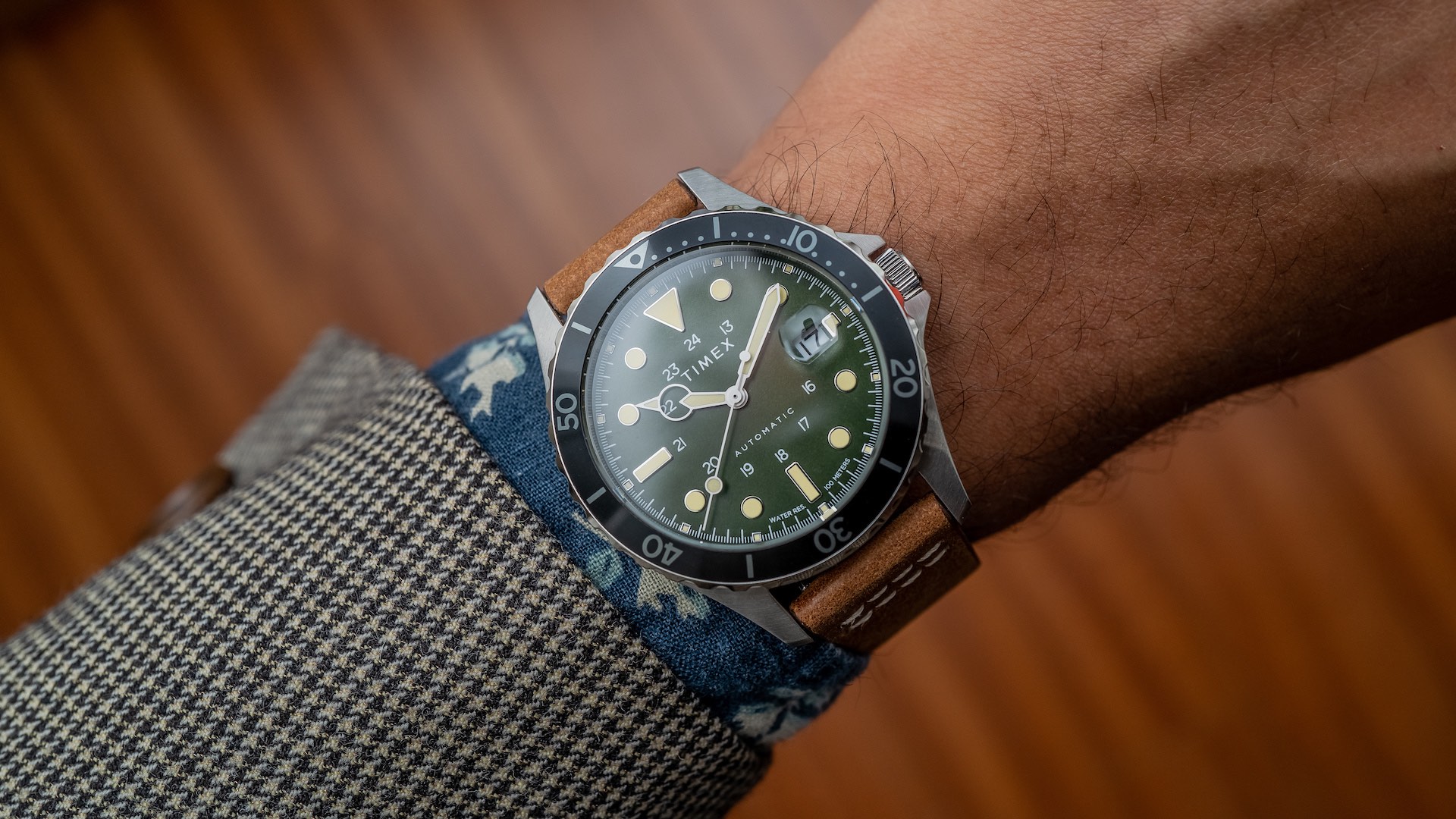 Just released is the new Timex Navi XL Automatic, which is the first mechanical watch in this collection and the first mechanical “military-style” sport watch from Timex. With a green dial, that distinct hour hand, and overall thoughtful proportions and finishes, this is an impressive offering from Timex. More importantly, it’s a lot of fun, style, and value at $260.

(Update: Timex has addressed the hour hand issue in their final production model that’s going to be available online this week. See image below for what the final product will look like) 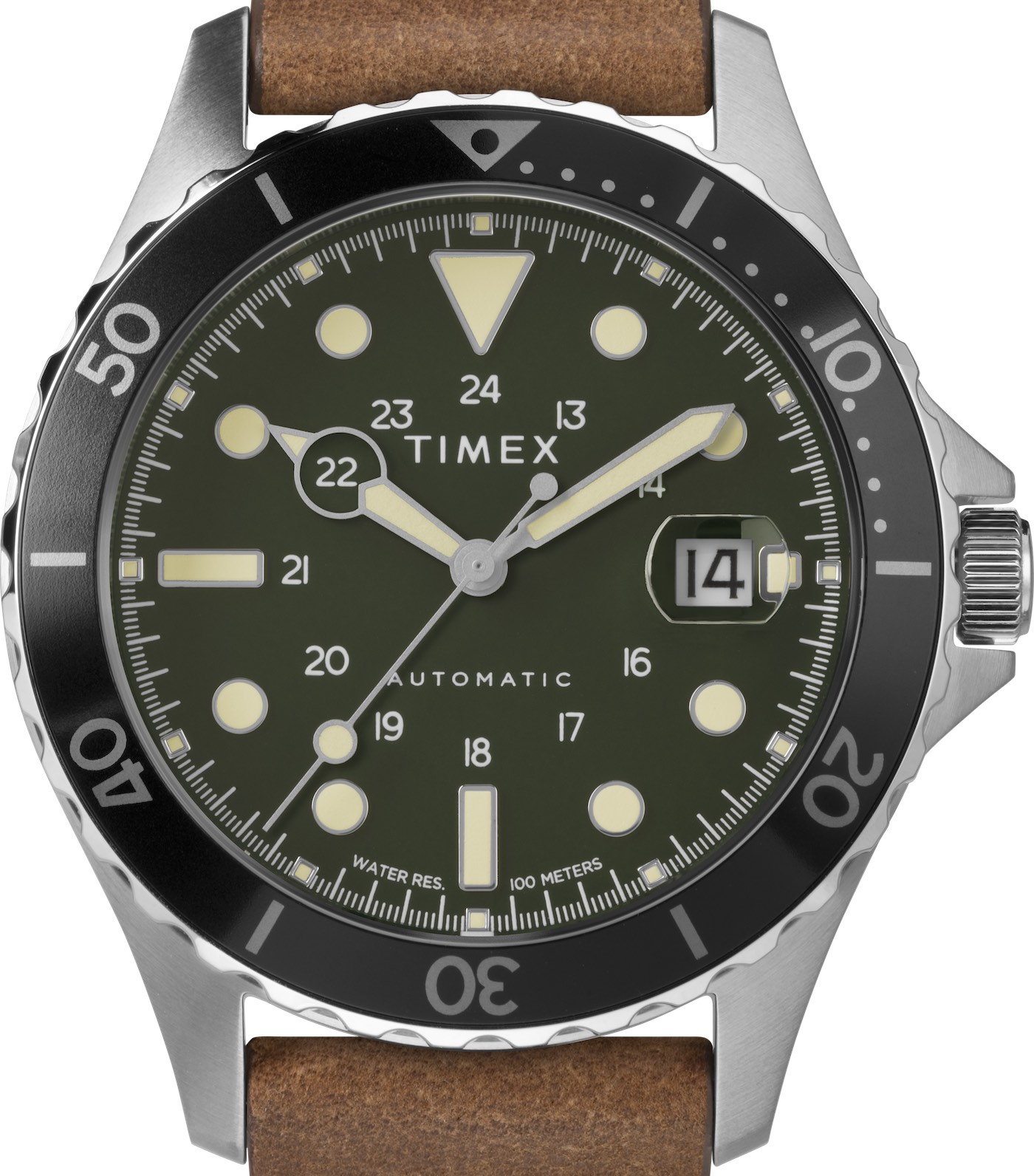 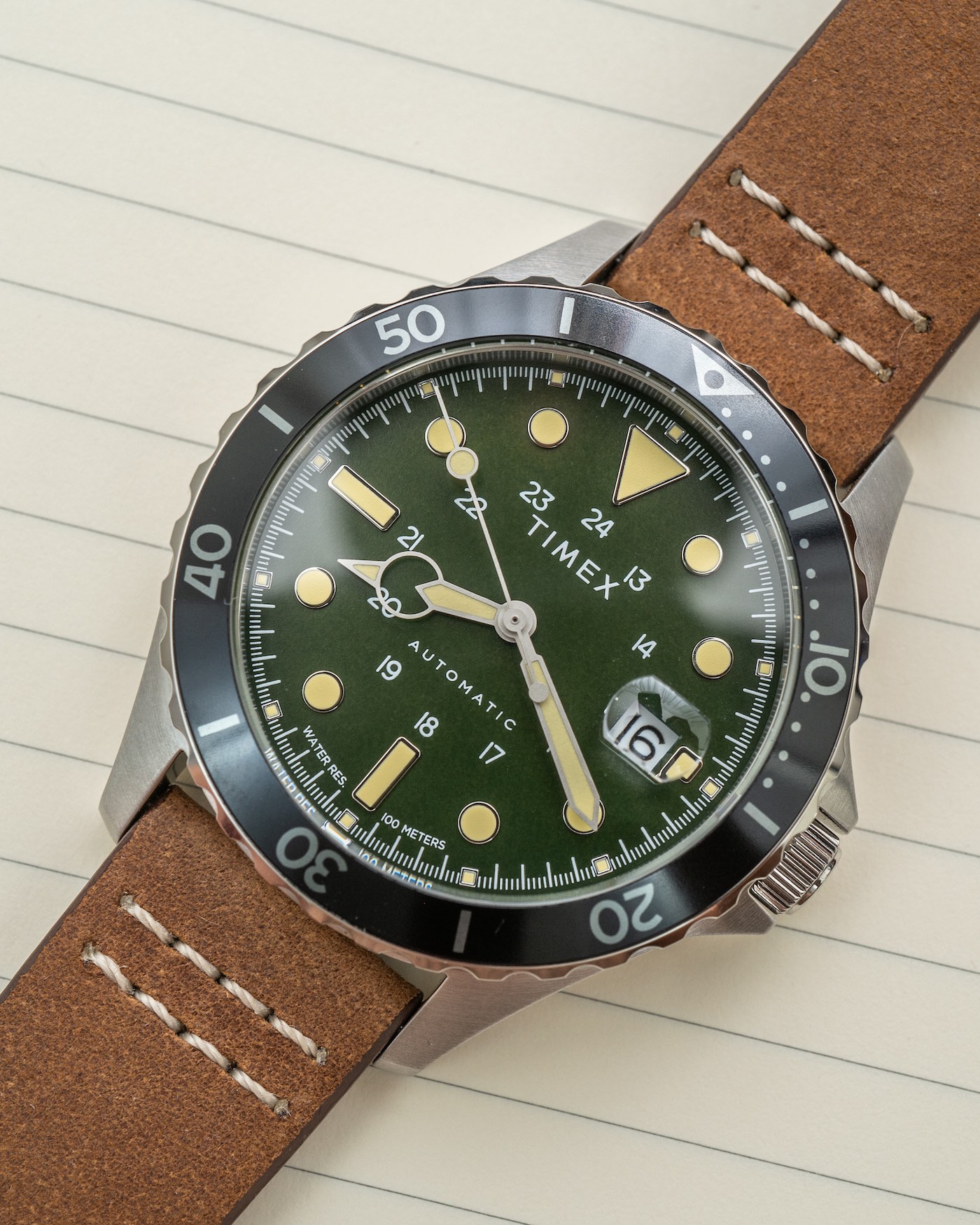 Timex has been executing a two-pronged strategy in the past few years, with the mission of increasing not only its mechanical watch offerings but also to reach two distinct buyer groups. On one end, there is the American Documents collection in the $500 range that was introduced earlier this year. Far more expensive than Timex watches that came before it, the American Documents watches are all about being “small-batch” American-made pieces. These were the first Swiss movements Timex introduced, while the Marlin automatic that came out last year in 2018 with a mechanical automatic movement added to collection’s  hand-wound edition. Now, the Navi XL Automatic is the first sport watch that Timex has introduced in its mid-tier $250 range of automatic movements that falls between the basic quartz offerings and the Swiss Ronda-powered American Documents collection. 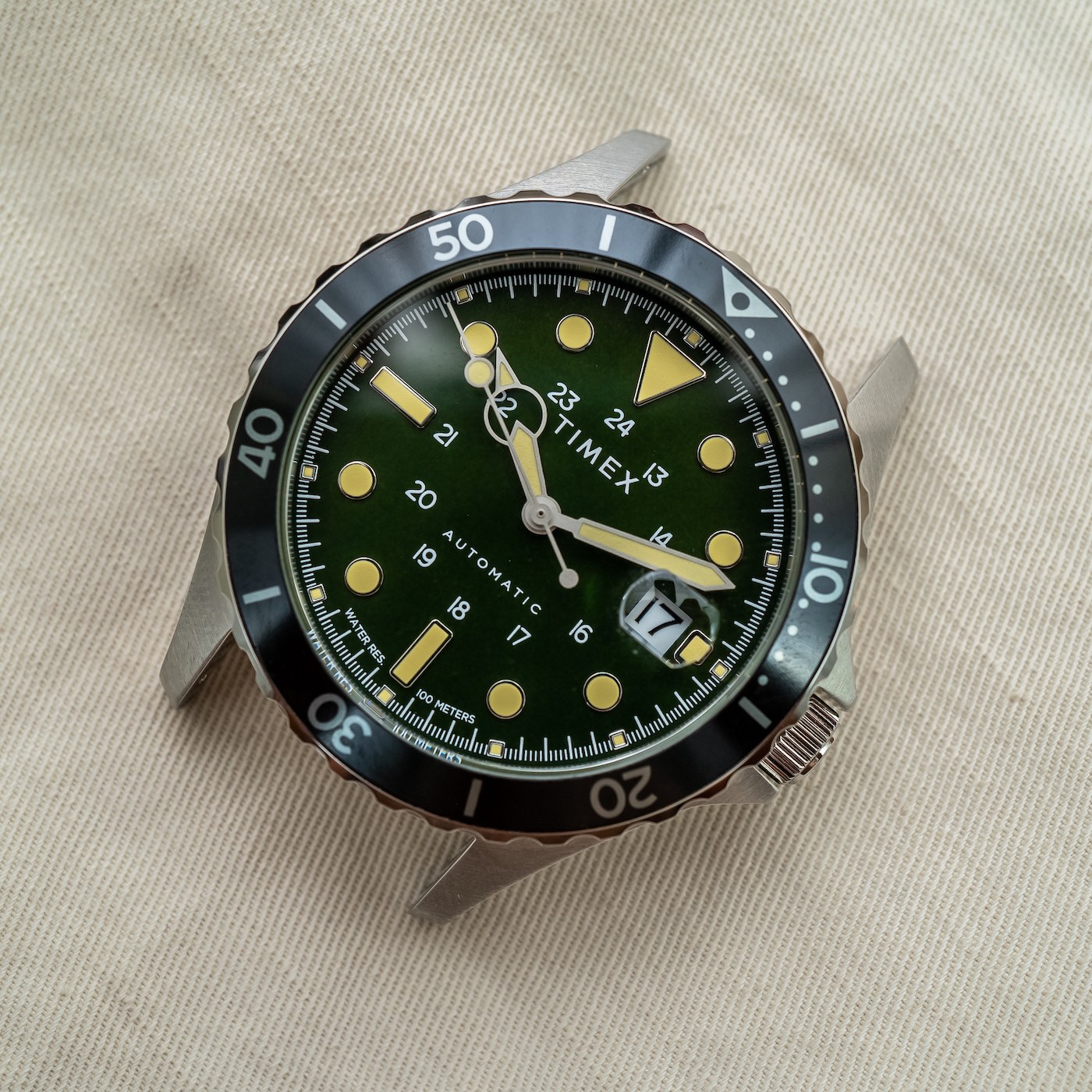 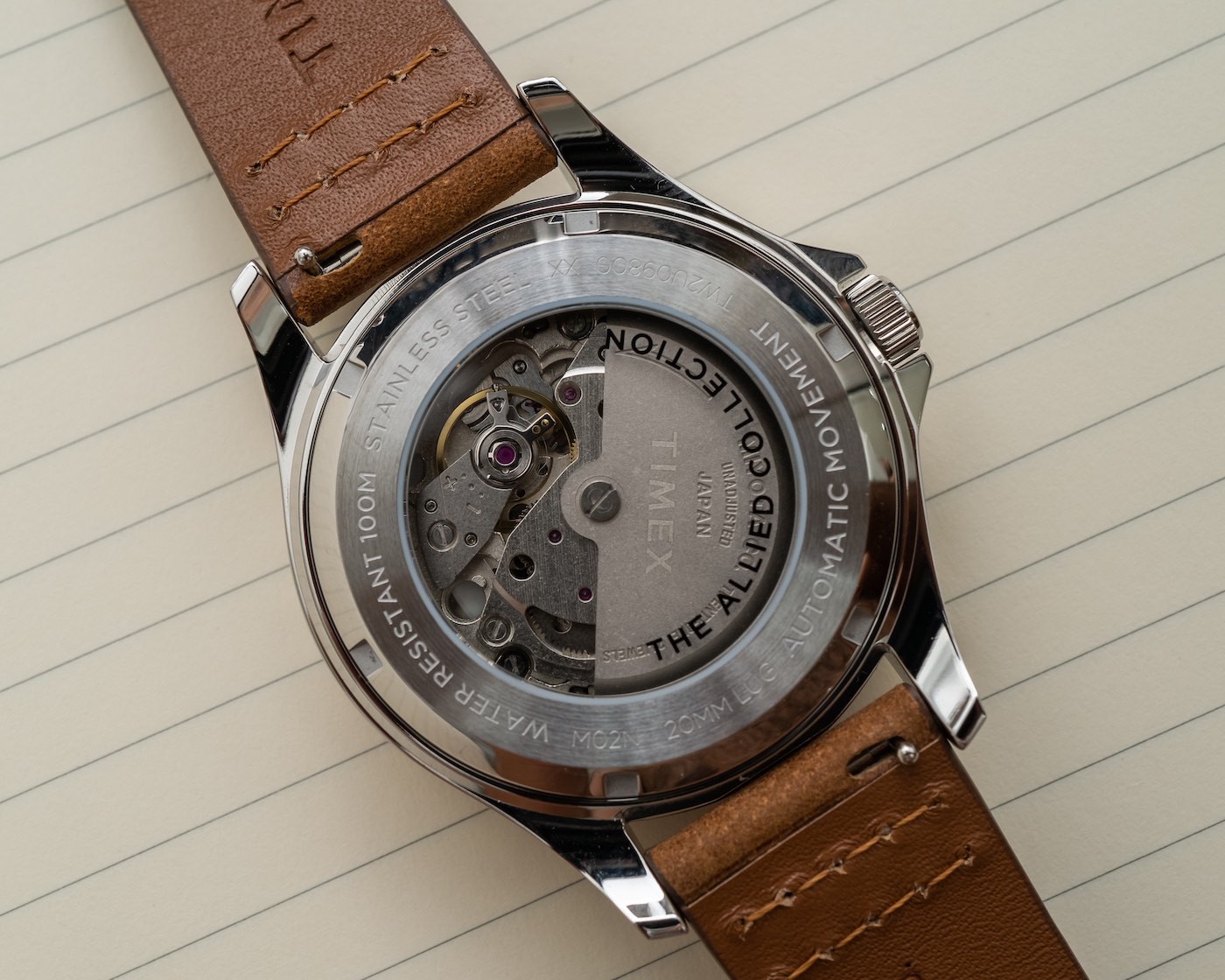 Sharing the same Miyota movement found in the also-recently released Waterbury, the Navi XL Automatic is the product of a brand that’s been paying attention to the “non-negotiables” of buyers in this price range. This price range is packed with homage watches, but not much in the way of design with at least a semblance of originality and a personality that has roots/history that are the brand’s own and not appropriated or simply made up. Definitely nothing that’s American. This is where Timex excels with the Navi XL Automatic.

The movement is what it is, and Timex has the word “Japan” engraved on the rotor right above its own logo. The Miyota movement has a 40-hour power reserve and isn’t finished with any extra frills or embellishments. It’s competent, and it doesn’t seem like Timex is trying to fool anyone. 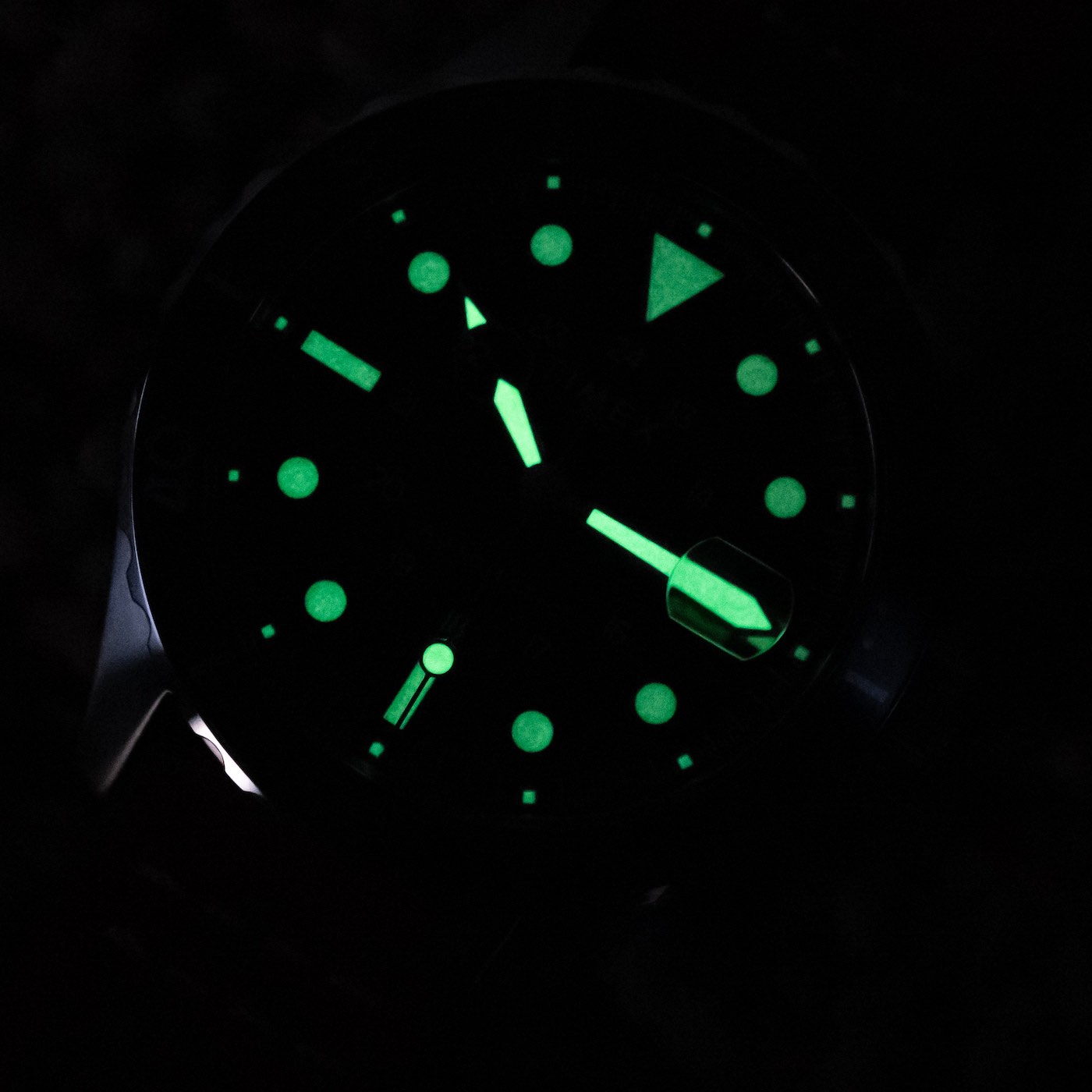 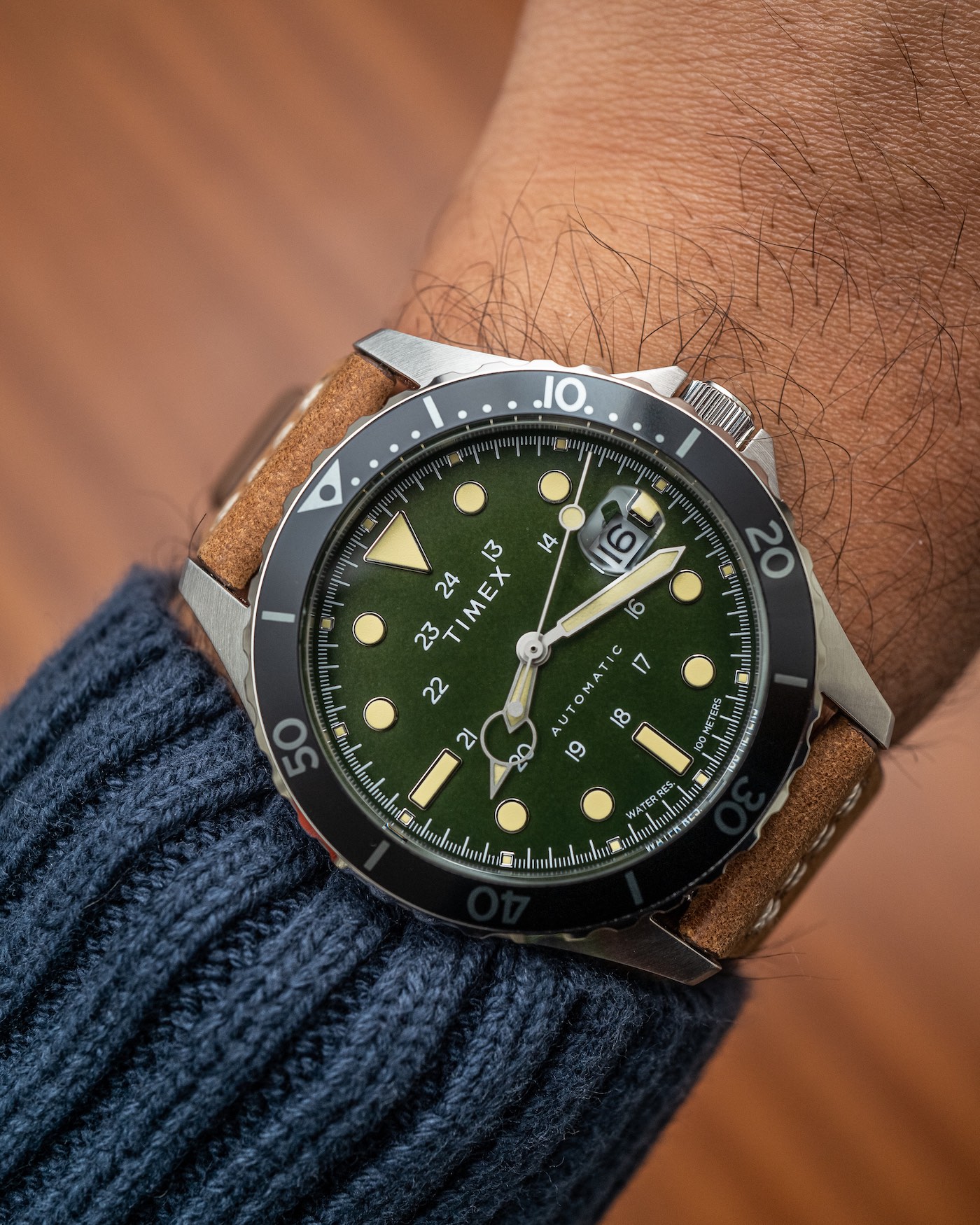 I like that the Navi XL Automatic doesn’t try to adhere to staunch vintage dive-watch design, as there is no shortage of that out there. The 24-hour markers give it a distinct field-watch vibe, as does the green dial, along with the tan applied indices. The square crown guard is a clearly borrowed and well-executed nod to the old 5512 Submariners. 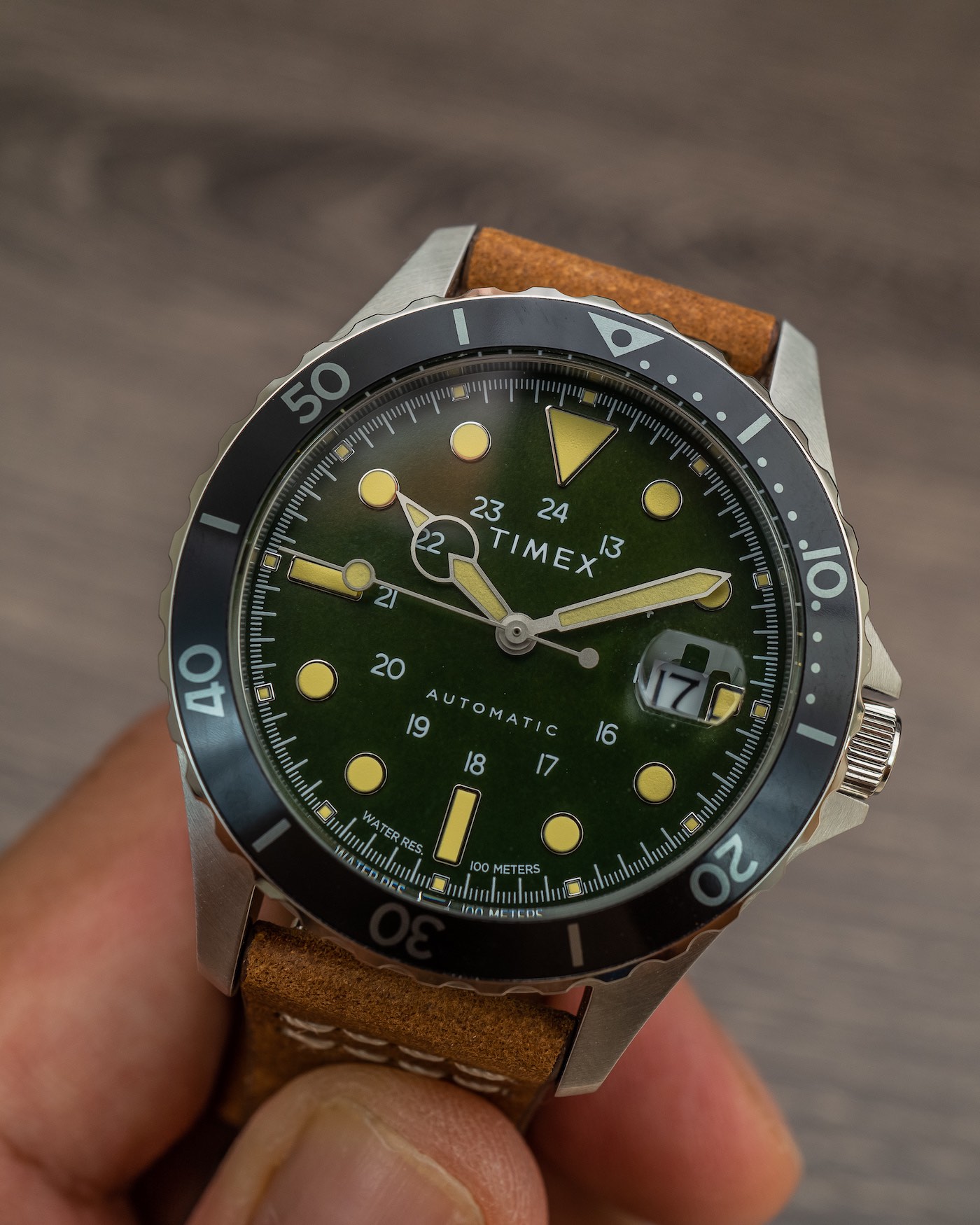 The hands are legible, and I find the semi-skeletonized hours hand to be pretty cool,

As shown in the rendering and mentioned at the top of the article, Timex fixed the short hour hand in the final production run of the watch. 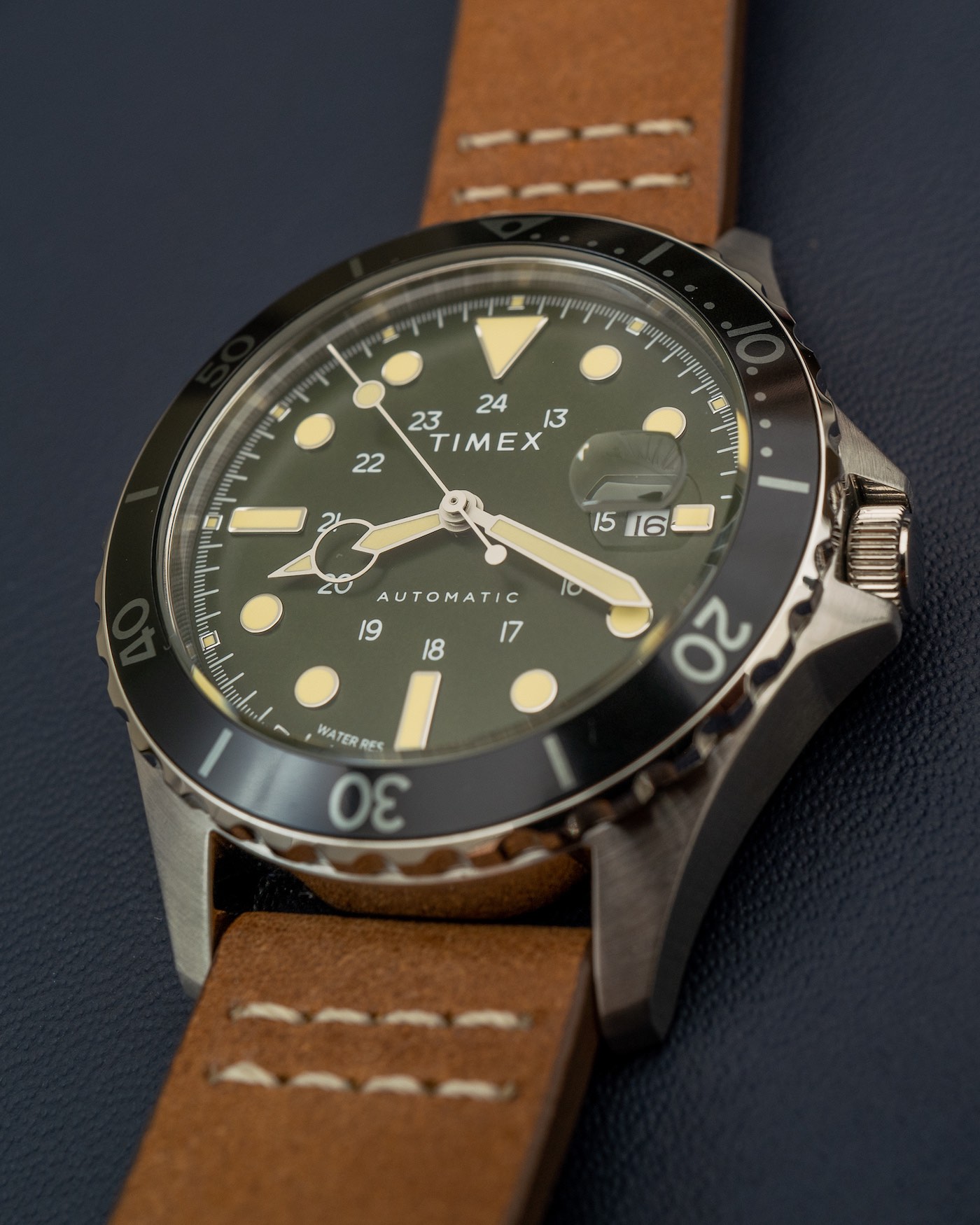 As a cohesive whole, the green dial looks fantastic in person, as it’s not bright or too in-your-face. The hands, dial, and applied indices are all about as nice as you could expect for this price point and even a little higher. I presume there is going to be the usual split-opinion on the date window, which I personally have always found to be the most useful and practical complication on a watch. It reads well and isn’t too distracting, but the 15 from the 24 hour ring does elbow itself in at certain angles. 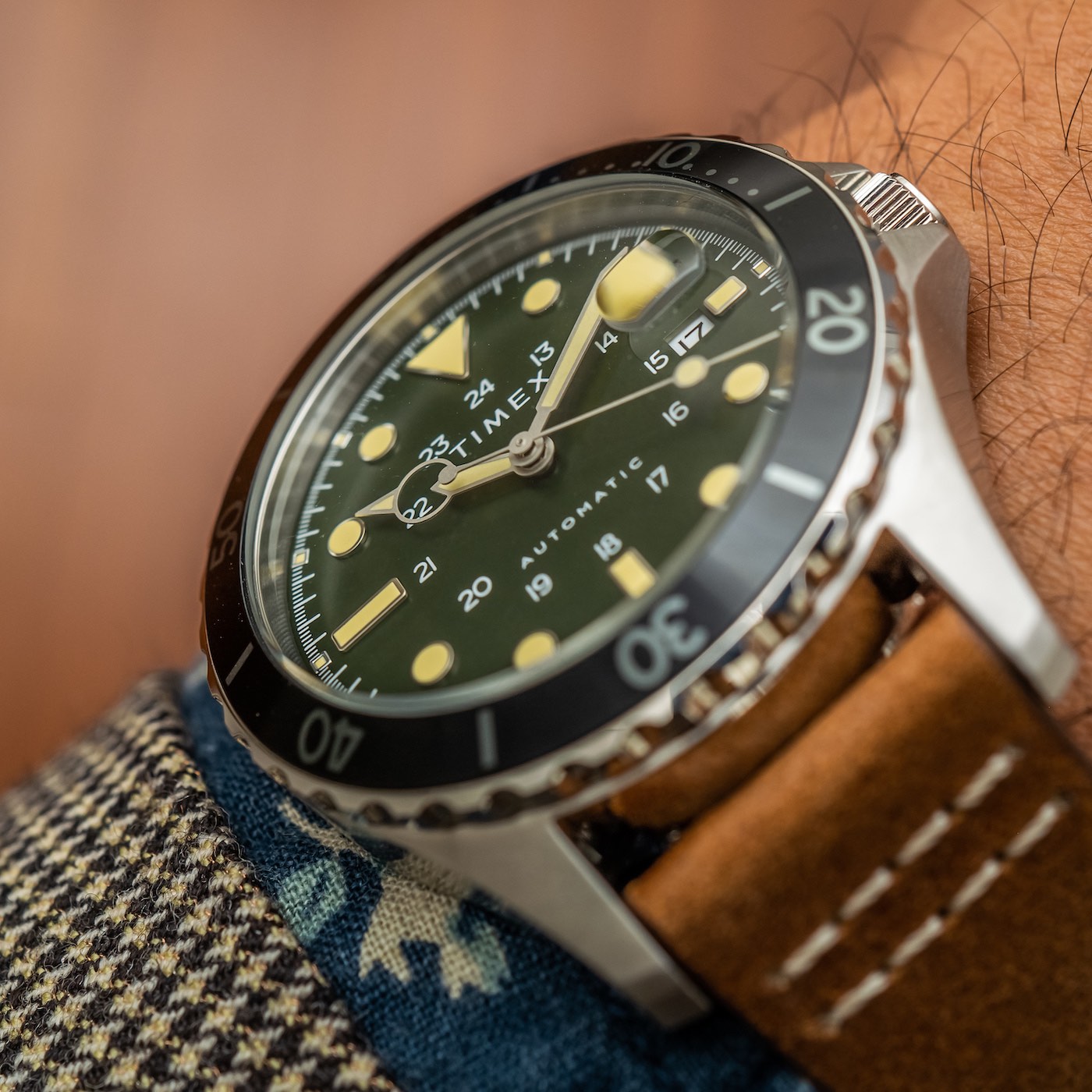 The Timex Navi XL case is water resistant to 100M. It’s sized at 41mm-wide and just around 12.5mm-thick with a lug-to-lug measurement of right at 50mm. The crown isn’t a screw-down, and one pull gets you the quick date adjustment, while two pulls lets you set the time. It’s not hacking seconds, though the minute hand is pretty receptive and without any “wobble” or oversensitivity when setting the time. The unidirectional rotating bezel isn’t the easiest to grip or adjust, but it does look and feel top-notch in terms of quality of finish. 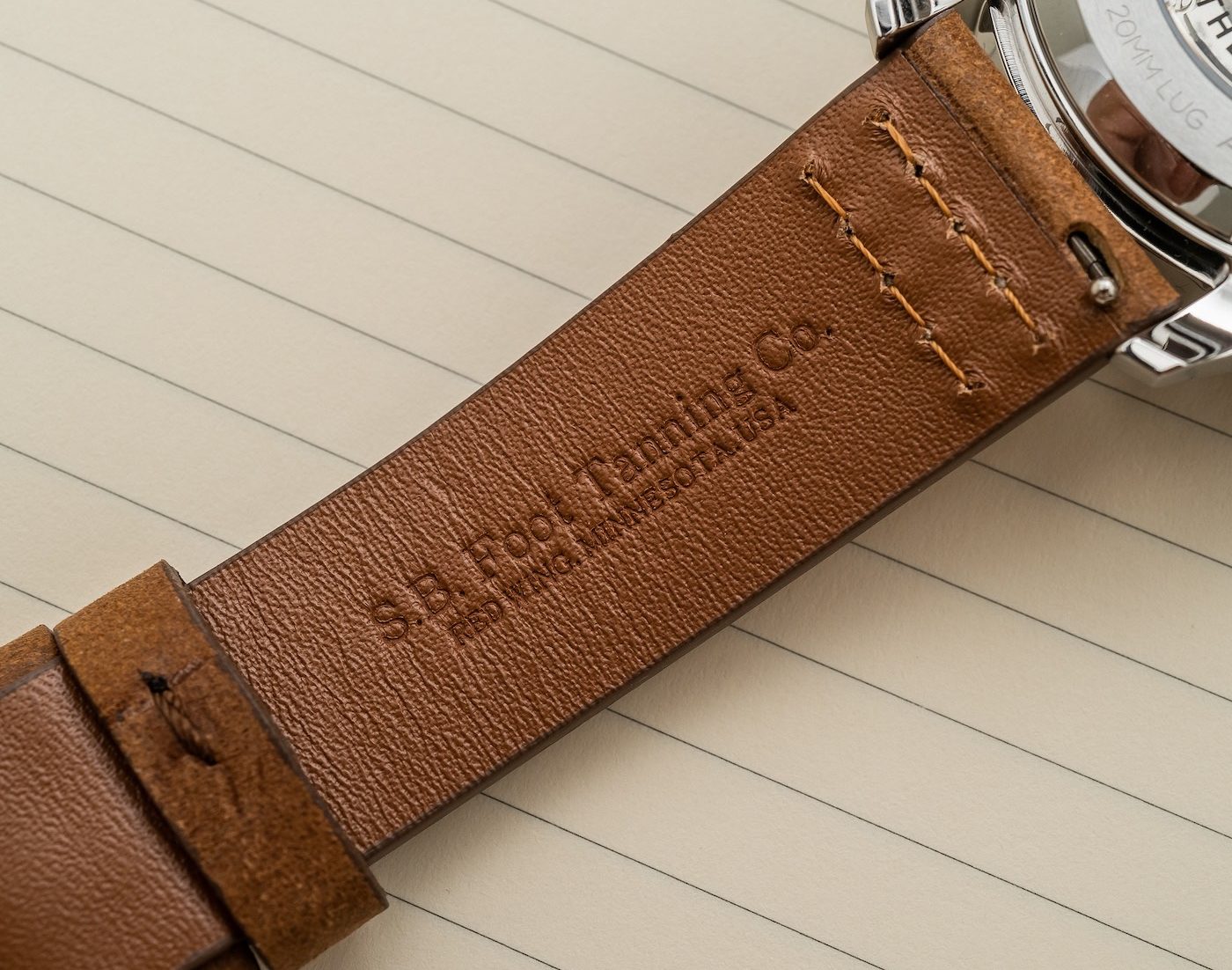 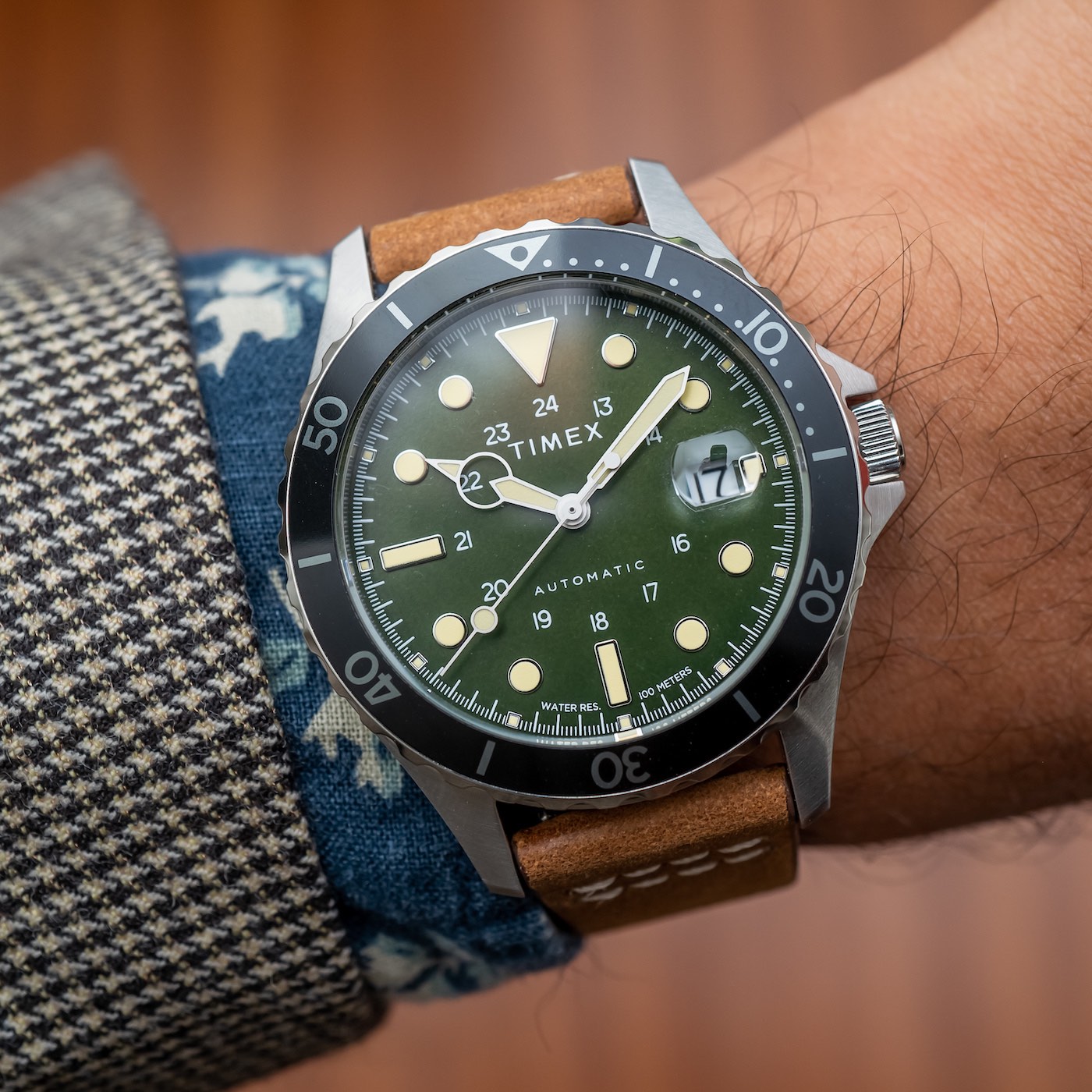 The Timex Navi XL comes on a brown leather S.B Foot Tanning Co. strap with an easy strap-change system. It matches really well with the rest of the watch, and it’s very high-quality, even when you don’t consider price. Right now, Timex is introducing only this model of the Navi XL Automatic, though there will be additional versions coming some time in 2020. Again, price for the Timex Navi XL Automatic is $259 USD, and the watch should be available beginning later this week. You can learn more at timex.com.