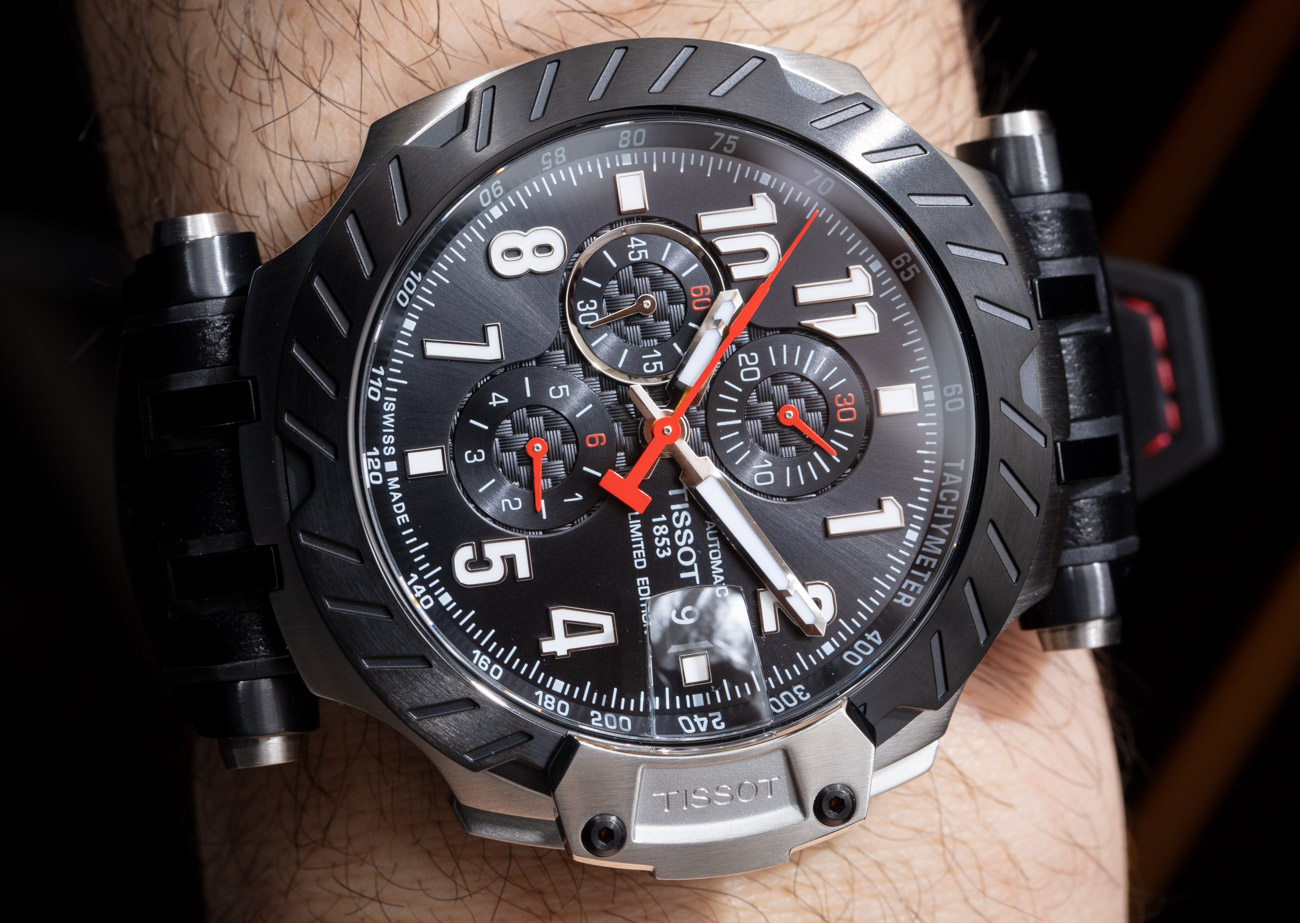 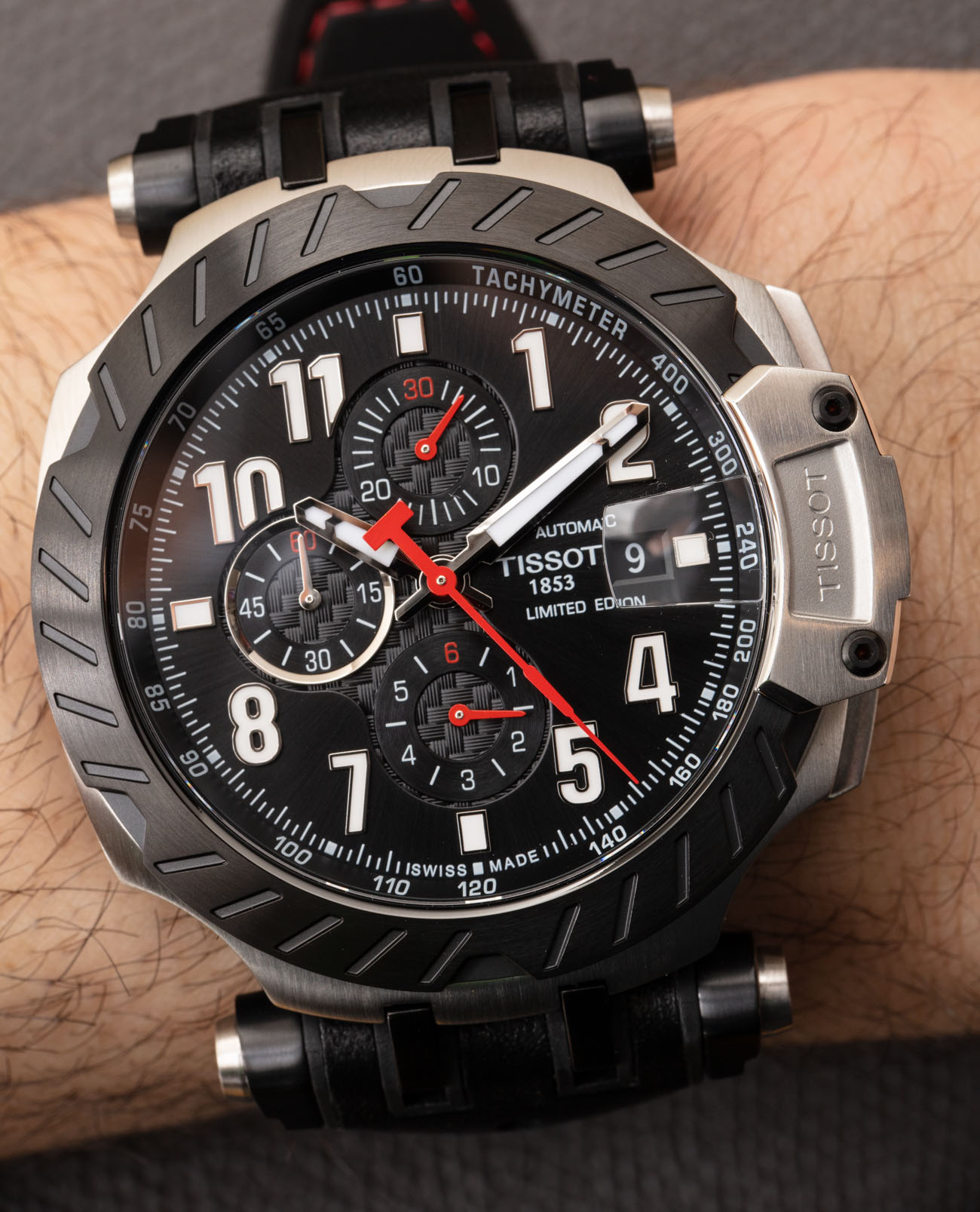 To celebrate and support its ongoing relationship with the MotoGP motorcycle racing series, Swiss Tissot continues its tradition of making regular limited-edition watches within its longstanding T-Race collection. Today. I look at one of the most recent versions, which is the limited edition of 3,333 pieces Tissot T-Race MotoGP 2020 Automatic Chronograph reference T115.427.27.057.00.

When I think of the Tissot T-Race — a watch with design cues specifically meant to evoke a motorcycle wheel — I think of the time that I joined Tissot to one of the MotoGP races. The venue was the Laguna Seca racetrack near Monterey, CA, and it was summer hot. I’d been to the track before and have gone since, and never was it as crowded as on MotoGP day. Tissot is wise to sponsor the sport, especially because the fans make such sense given Tissot’s price-point relevancy to them. What also surprised me is how many Tissot T-Race watches I saw on wrists as I wandered through the crowds. Not only was the Tissot name represented on signage, but also on wrists. To this day, I wonder what Tissot was doing right to communicate to all those fans about the watches. For me, it was a total validation of when watch marketing and consumer interest aligns properly. I also later learned, directly from the man himself, that Brad Pitt is an enthusiastic MotoGP fan. 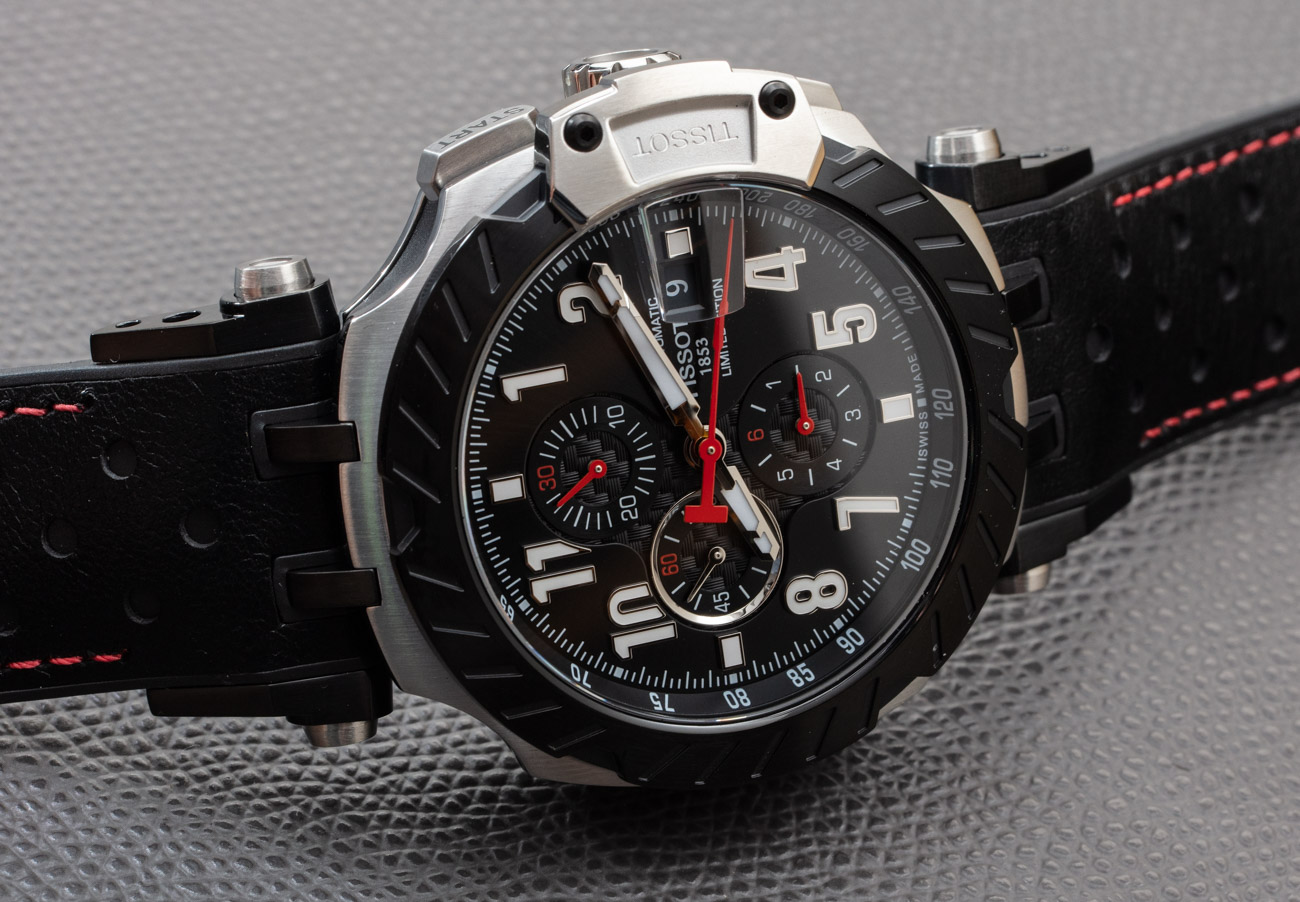 Tissot and MotoGP are still going strong, and the MotoGP 2020 T-Race watch is familiar but a bit of a fresh take on the theme. While not a direct emulation, to me, the MotoGP 2020 version of the T-Race Automatic Chronograph seems inspired by some Audemars Piguet Royal Oak Offshore dials. Not a bad thing, and it gives the watch a more of a bold, timeless, yet clearly sporty look to it. This is, in my opinion, one of the better T-Race watch dials so far.

Tissot really pulled back from some of the less traditional design elements on the dial and preferred to go with some more simple yet satisfying methods to make a dial look nice. First, the hour markers are applied while the subdials are slightly recessed. That gives the dial a welcome sense of depth. Then, you have the very light level of texture inside the subdials. Around the dial is the requisite tachymeter scale, and the visible and well-sized hands are all Tissot in aesthetic DNA. 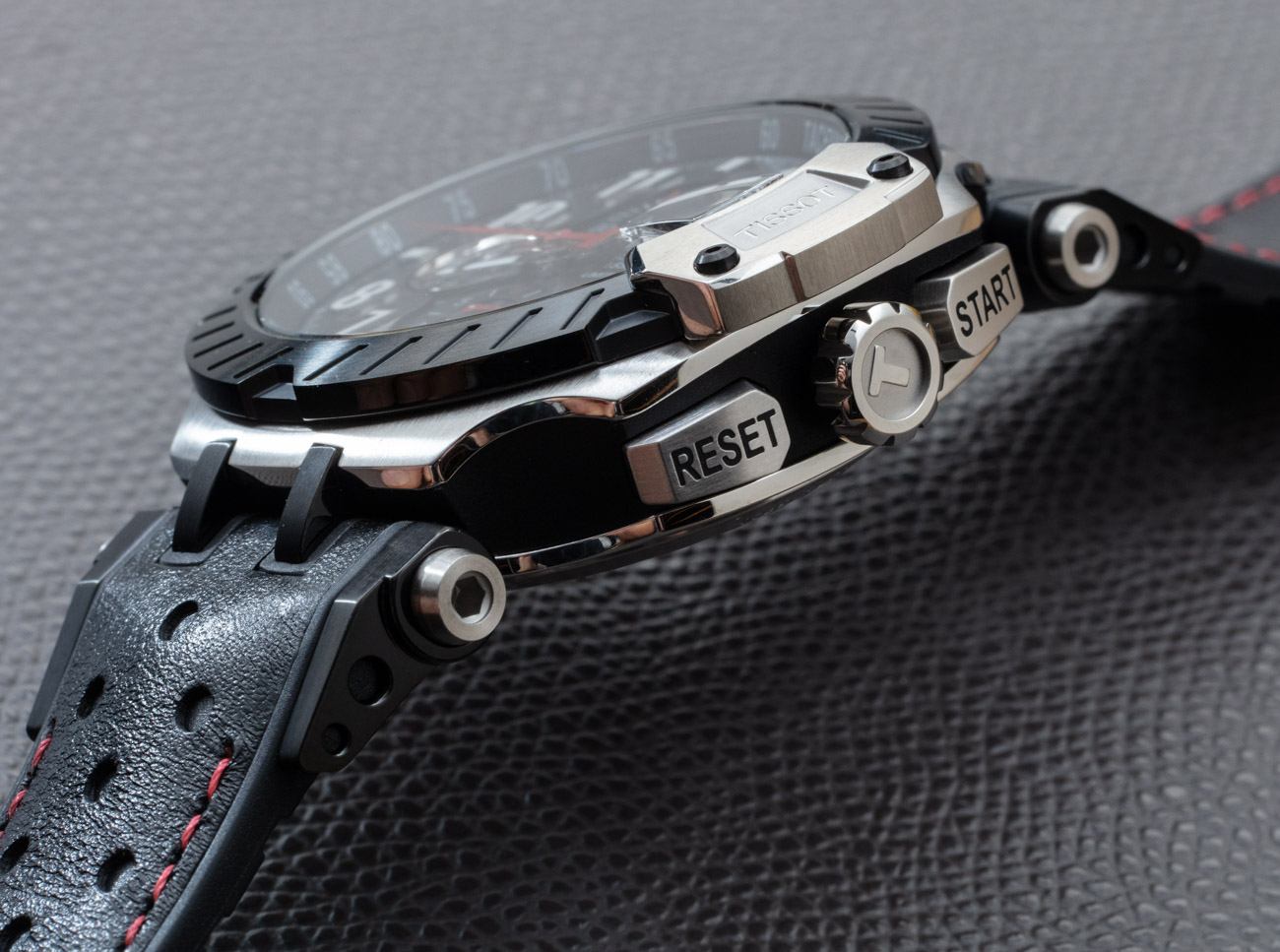 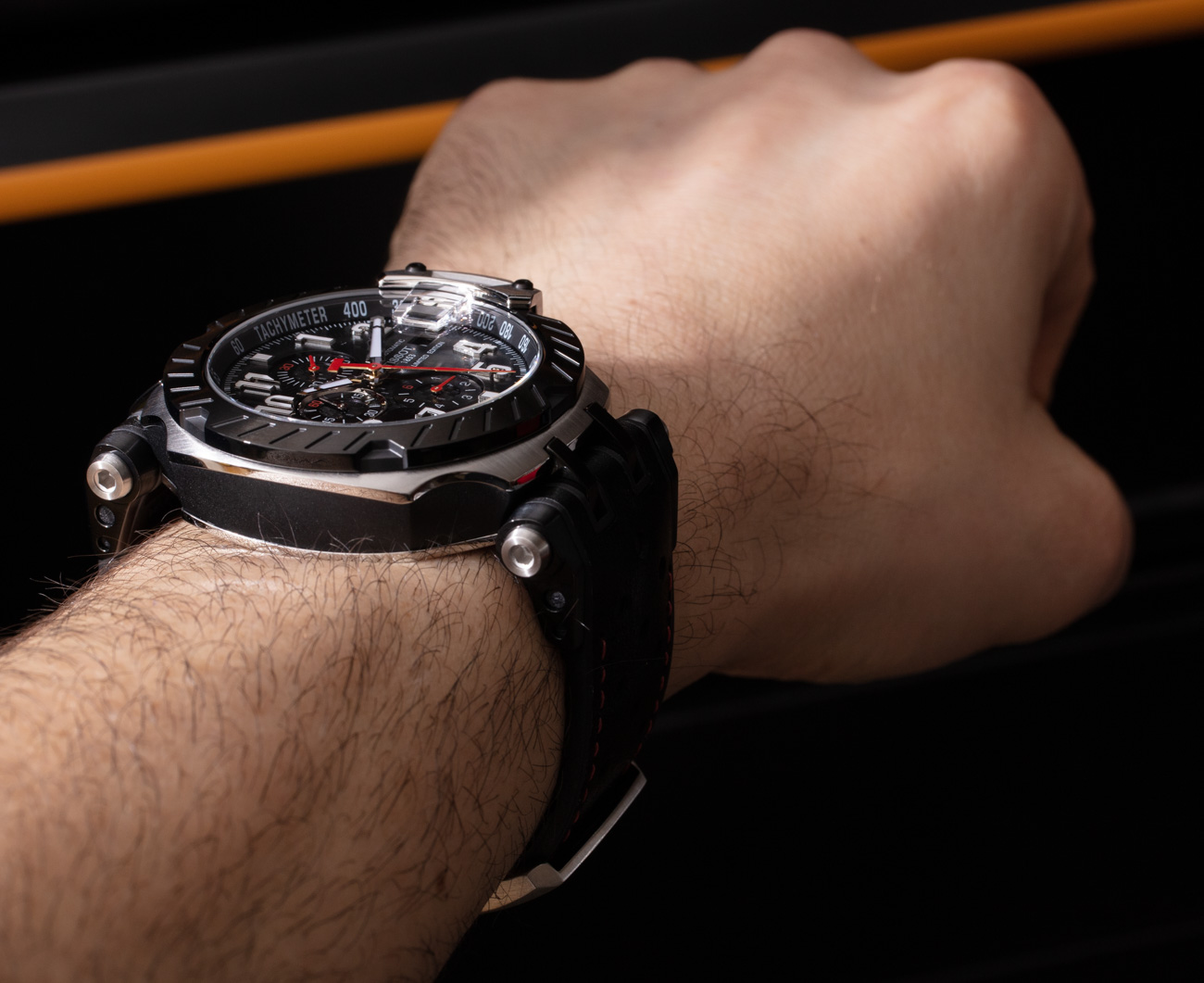 One of the oddities of the T-Race case (which has never seemed to go away) is the caliper-style crown guard that merges with the magnifier on the sapphire crystal over the date. I am pretty sure Cartier started this design tradition on the Roadster, but it has been a signature part of the T-Race, along with the brake rotor-style bezel, for as long as I can remember. Oddly, the magnifier doesn’t magnify too much — a bit more would have been welcome, especially to justify the mass on the crystal.

You either love or hate the T-Race Automatic Chronograph case, but it is undeniably comfortable. And that says a lot given its hefty size and mass. The case is 45mm-wide by about 16.5mm-thick. It also has a roughly 49mm lug-to-lug distance, which isn’t that bad, actually. Though that doesn’t take into consideration the articulating lugs, which really help the T-Race case and strap fit neatly over most all wrists.

The 22mm-wide strap and overall wide proportions makes the T-Race Automatic Chronograph feel big, but the moving lugs and the high-quality rubber strap make it wear snugly without floating around on your wrist. The case itself is water resistant to 100 meters, and produced from steel, with some sections of the case (such as the middle) with a matte black PVD coating. Detailing around the crown and pushers is nice, along with good overall fit and finish. 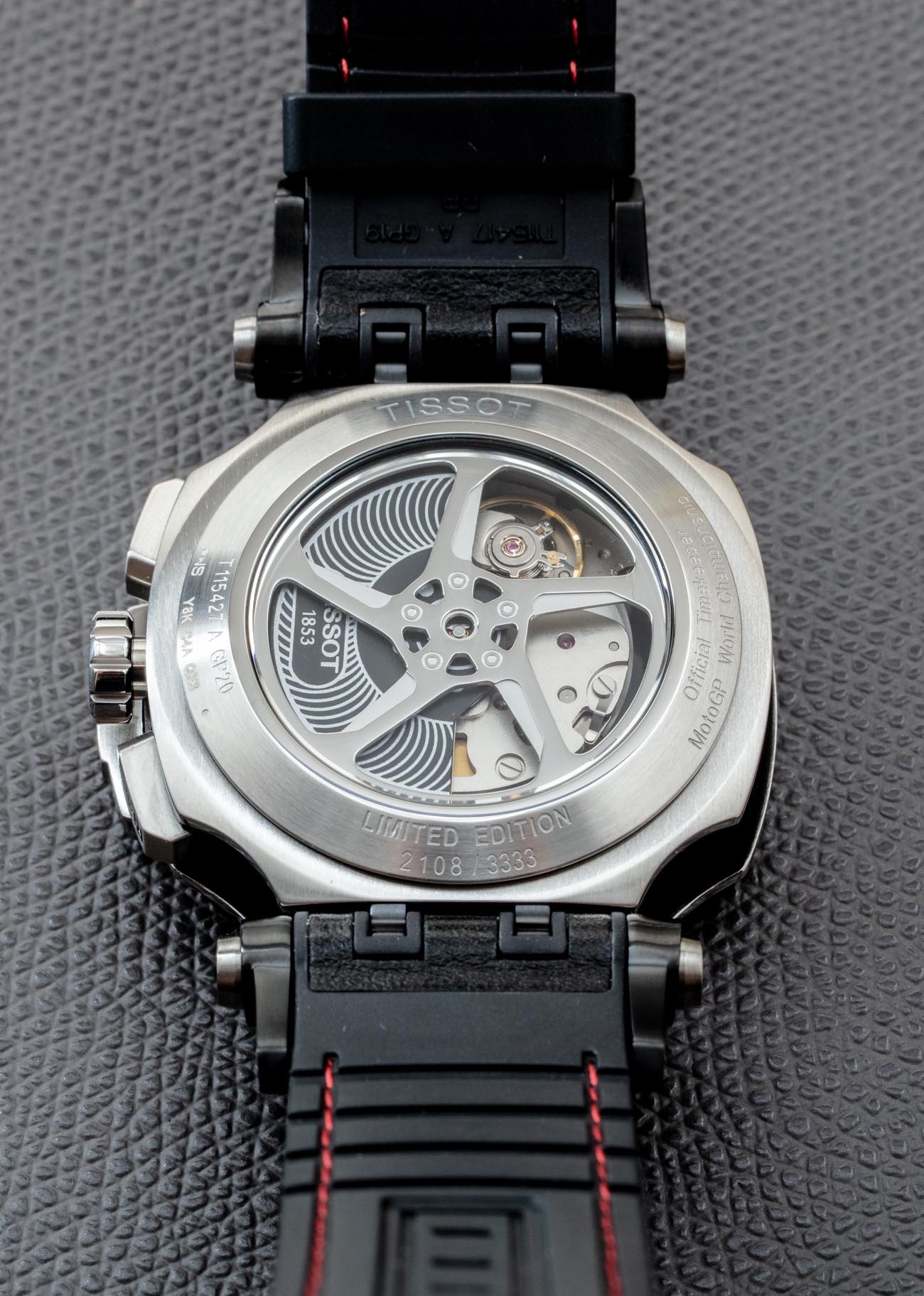 Inside the Tissot T-Race MotoGP 2020 Automatic Chronograph is a movement that you will not find outside of the Swatch Group, which is produced by ETA. It is known as the ETA caliber C01.211 and it is less expensive to manufacture than the ETA Valjoux 7750. The story of the movement is sort of interesting because what ETA did to accomplish this was to develop a new way to produce the basic architecture of a fan favorite historic movement known as the Lemania 5100. No longer produced today, the Lemania 5100 was a popular automatic chronograph movement found in a lot of military and sport watches up through the 1990s.

The 5100 movement isn’t directly replicated here, but its core elements are, and for me that makes the C01.211 a bit more interesting. The movement isn’t too pretty to look at, but it is partially visible through the motorcycle wheel-style window through the rear of the watch, which is neat. Don’t miss the interesting design on the special Tissot-exclusive automatic rotor design. 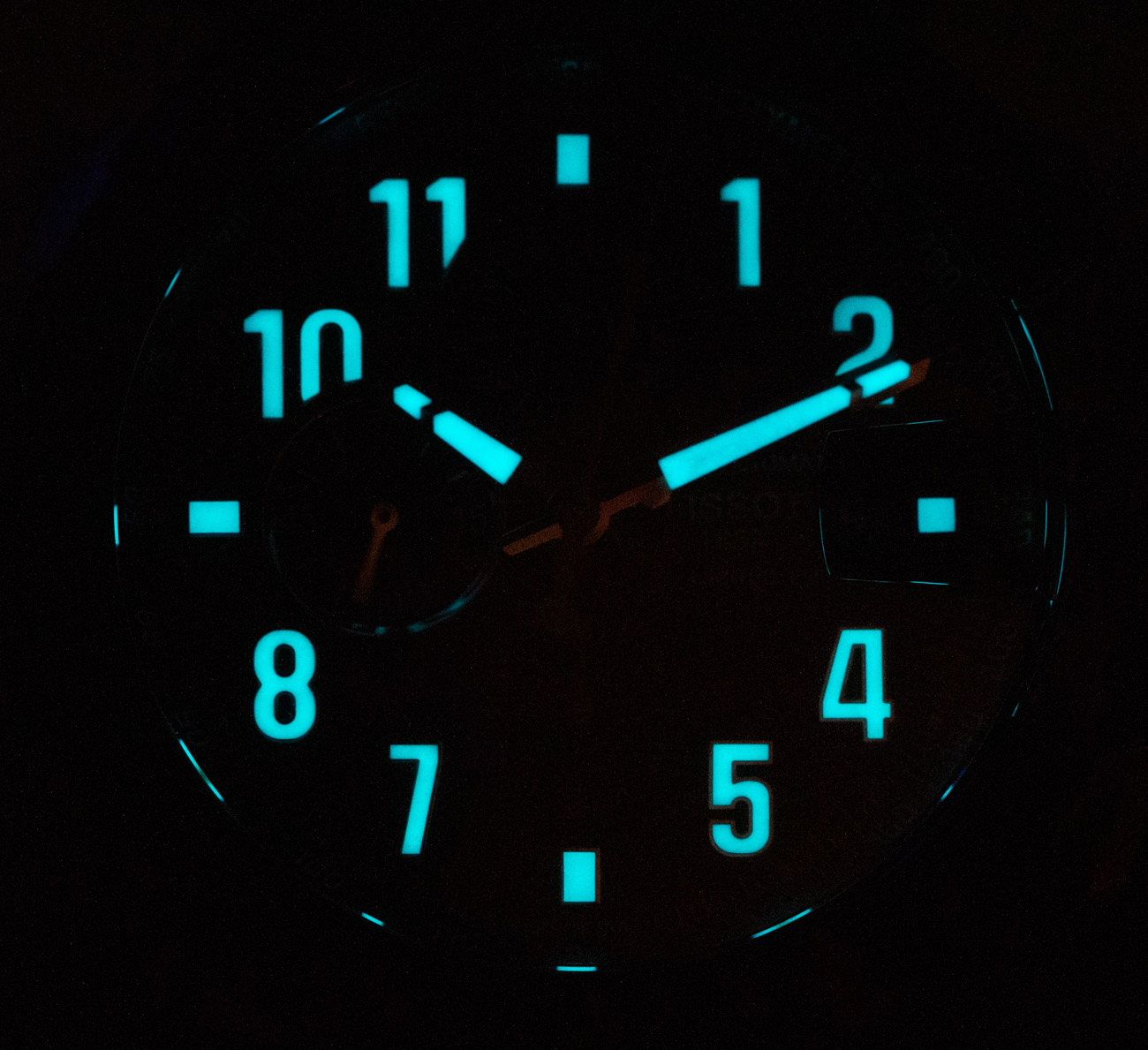 The start-and-stop functionality of the C01.211 movement is actually quite nice, and overall the chronograph functions well, save for the amusing fact that Tissot gave it a 6-hour (versus 12-hour) chronograph. My theory is that this was chosen in order to give the 7750 some talking point advantages over the C01.211 for consumers trying to understand why one costs less, though, in reality, the only difference between a 12- and 6-hour registering chronograph is the number of teeth in the gearing and the printing on the dial.

Performance-wise, the C01.211 automatic movement operates at 3Hz (21,600 bph) with 45 hours of power reserve. Even though I normally associate this movement with sub-$1,000 watches, it isn’t actually a poor performer (though a little bit silicon in there would have been nice), and the T-Race watch has a lot of case detailing that merits the price point. That said, I have a feeling that too few customers of watches with Co1.211 movements are nerdy enough watch enthusiasts to know what a Lemania 5100 is or why anyone today might take interest in it. Suffice it to say that this Tissot T-Race Automatic Chronograph watch has a movement whose architecture has powered a long legacy of professional and military watches.

To keep the MotoGP dream alive in wristwatch form, Tissot would really benefit the T-Race collection by creating more accessible imagery and media materials that tie the watch with the world it is meant to evoke. I’d love to see this watch in context with some of the racing bikes and against the backdrop of famous tracks where MotoGP races have occurred. It is possible that Tissot has created materials such as this, but it isn’t available on its website and I think, to a degree, they and too many other brands today want consumers to use their imagination in understanding where and how a timepiece such as this fits into a modern luxury lifestyle.

Tissot has a lot of good watches here and some fun talking points for anyone who wants to dig deeper into the movement and heritage of the collection. That is a good thing because if there is anything that watch collectors like aside from a distinctive design, it is a good story to tell. While clearly not for everyone, the Tissot T-Race MotoGP 2020 Automatic Chronograph is a more than decent watch with a lot of personality. Limited to 3,333 pieces, price for this reference T115.427.27.057.00 is $1,295 USD. Learn more at the Tissot website here.

Necessary Data
>Brand: Tissot
>Model: T-Race MotoGP 2020 Automatic Chronograph reference T115.427.27.057.00
>Price: $1,295 USD
>Size: 45mm-wide, ~16.6mm-thick, ~49mm lug-to-lug distance
>When reviewer would personally wear it: When around motorcycle and watch enthusiasts.
>Friend we’d recommend it to first: Watch collector who tends to spend no more than $1,000 – $2,000 per watch who has an affinity for motorcycle racing and wants something about as bold as can be but still with Swiss refinement.
>Best characteristic of watch: In a marketplace where many watch brands are making watches that look more and more generic or simple, it is great to see Tissot continue to dedicate to the quirky yet fun T-Race. Dial is most legible yet with masculine boldness along with refined legibility that the Swatch Group can do very well when they apply themselves.
>Worst characteristic of watch: T-Race overall design isn’t for everyone, and this incarnation of the collection is on the larger side. Even though Tissot is the official timekeeper of the MotoGP races, the limited-edition volume of over 3,000 watches seems a bit much. It might have been better for Tissot to just call it a “Special Edition” and not given it a numerical production number. Then again, unique serial numbers are always nice to have, too.