Titanic DNA Day & Night – What Time Is It You Ask. At This Price, Does It Really Matter? 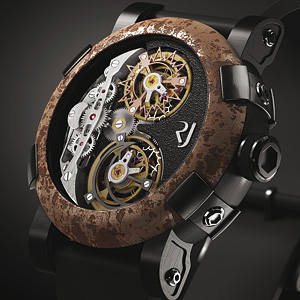 Earlier this year saw the release of the incredible, yet arguably excessive, new timepiece series from Romain Jérome, the Titanic DNA, a unique offering that uses parts of the actual ship in its construction. In what seems to be a year of firsts for this relatively new brand, Romain Jérome has introduced its own special interpretation of time in its extraordinary new creation, the Titanic DNA Day & Night. Limited to a series of nine, it is the world’s first watch not to display the time, however, that did not seem to do anything to deter those with disposable incomes far exceeding my own. The Day & Night sold out within 48 hours of its launch earlier this year as watch fanatics snapped up the US$300,000 timepiece.

With its combination of symbols and watch complications, this exceptional object houses the first “RJ One” movement, composed of two tourbillions on the foundation of a differential system — a world first! The transmission of energy symbolizes the passage from one life to another, in which the daytime activities of the Tourbillon Day are relayed after twelve hours to the private sphere of the Tourbillon Night.

Originally founded in 2004 when several professional golfers admitted there was a place for a genuine golfer’s watch, Romain Jérome produced its first niche watch, the Hole in One Golf Counter. This wristwatch displayed a golfer’s score throughout the 18 holes, enabling players to follow their own progress along the course, count the strokes played for each hole and add them up in the process. Aesthetically designed to feature symbols such as clubs, tees and golf balls, the brand quickly established itself within this niche market.

Although the company has now very clearly moved away from this original niche market, its focus continues to remain on high-end, limited edition pieces which feature precious metals and incredible attention to detail. The Titanic DNA Day & Night is certainly no exception in this regard, the features speaking for themselves:
Movement – “RJ One”, developed exclusively by BNB Concept
Functions – Double tourbillion, differential sequential – a world first
Case – Steel and titanium, 46 mm, Bezel in stabilised oxidised steel from the Titanic, Black ceramic claws, Double-sided anti-reflective sapphire crystal and back, “stylised cross” bridges on the back, water-resistant to 50 m
Dial – Coal black, using coal from the holds of the Titanic
Bracelet/Strap – Full-skin Hornback crocodile with folding clasp
Everyone will have their own opinions on this incredible timepiece, but one thing that can’t be disputed is its uniqueness. And that is worth an awful lot of money to at least 9 people on this planet.