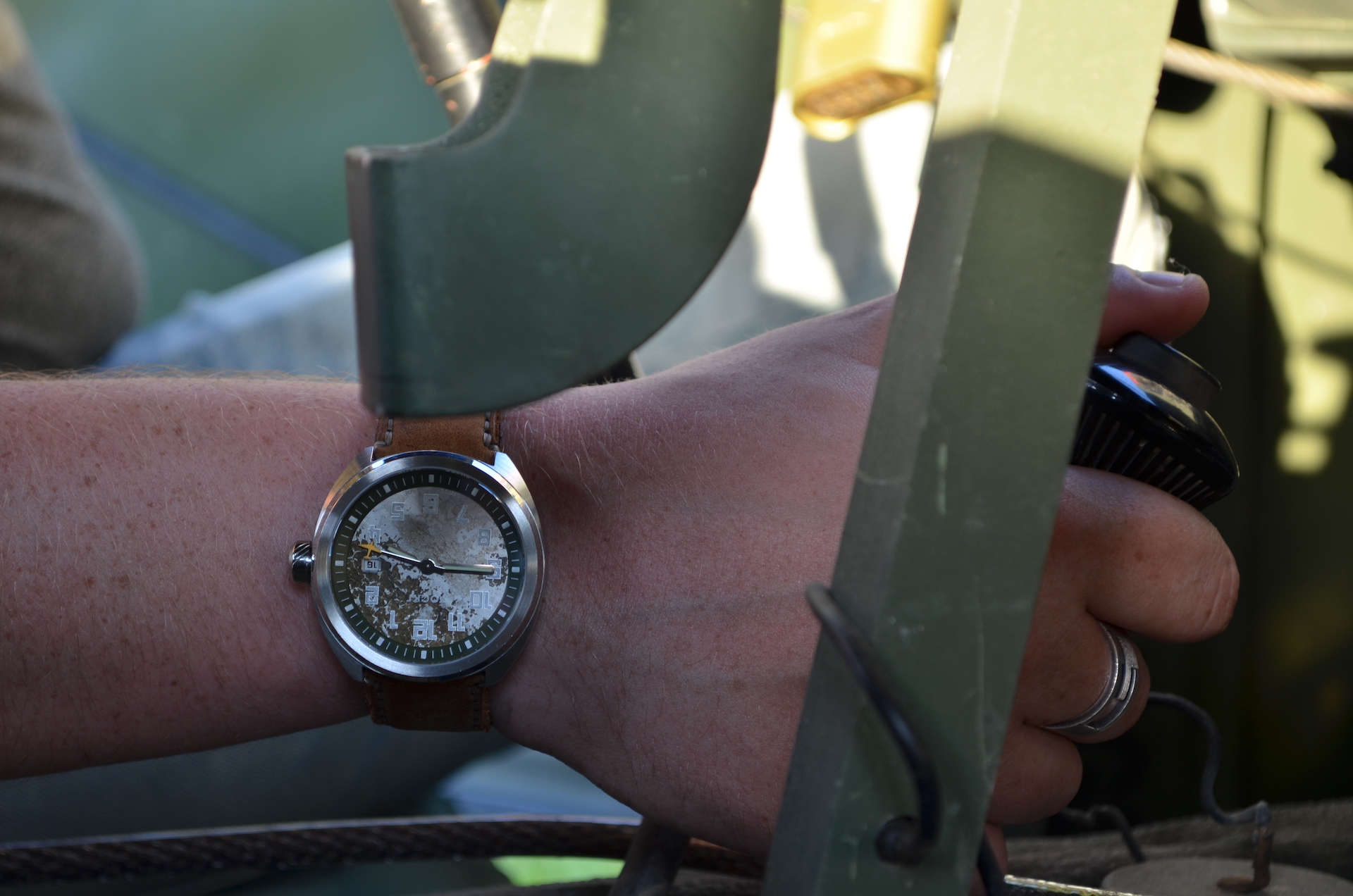 It’s not every day you get to wear a watch that includes a piece of history in it. As a self-proclaimed history buff, I found the all-new Tockr D-Day C-47 watch fascinating on a number of fronts. First, the real draw of this model is a dial made out of salvaged metal from the “That’s All, Brother,” the airplane known for leading the invasion of Normandy during World War II. Second is the everyday-man success of the Texas-based brand, in general. Tockr has a seemingly sixth sense for finding an experimental inspiration to fit its overall DNA — something even the major brands struggle with. And third, a portion of the proceeds is going towards the historic mission to restore the plane in partnership with the Commemorative Air Force (CAF). 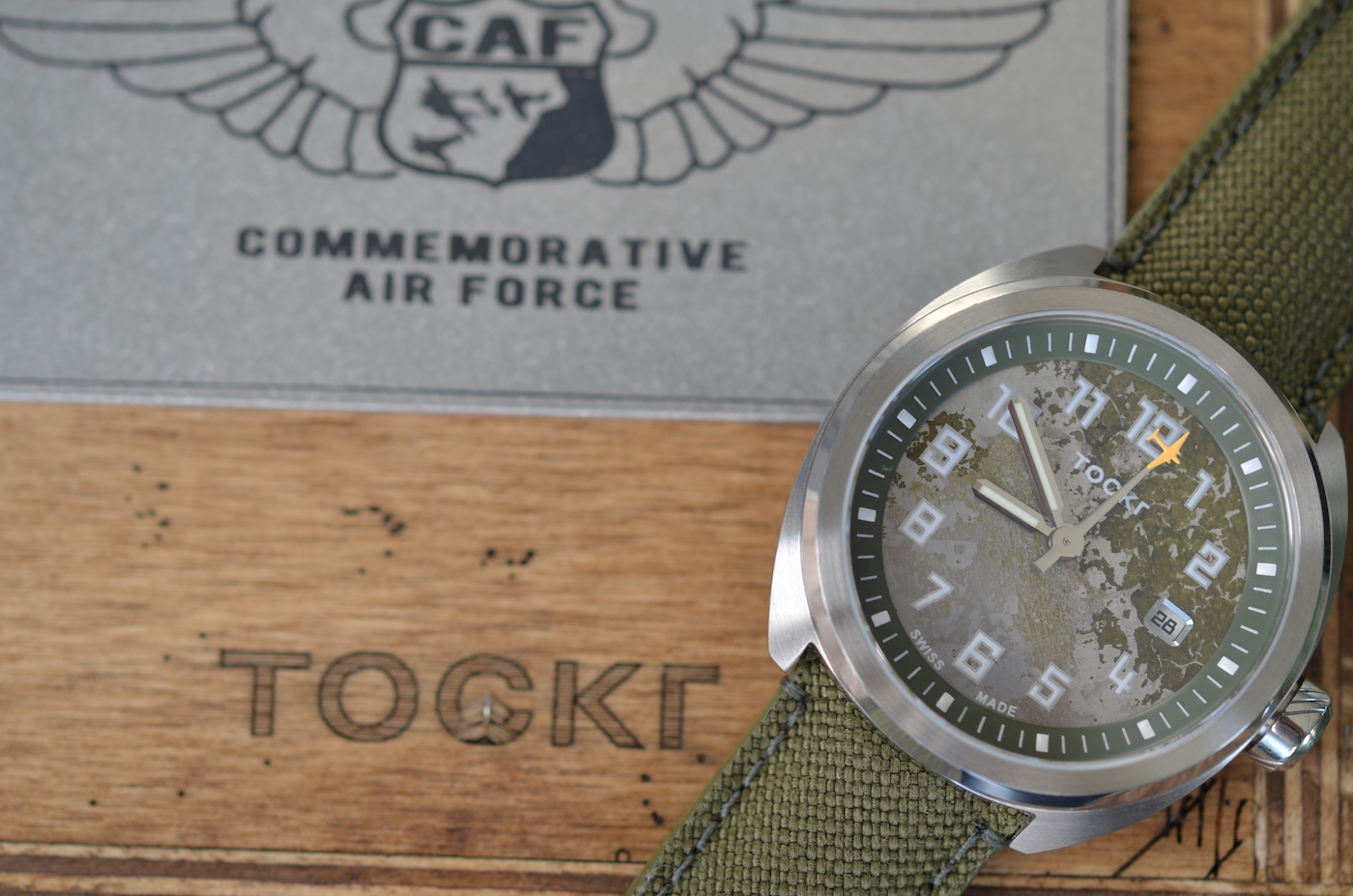 Let me first start with some context, because I feel it’s important in my overall opinion of the D-Day C-47. I already own a Tockr Air Defender Silverado: a rare green panda dial variation that I immediately fell in love with. It fit a cool niche and filled a cool colorway gap in my collection, while still channeling the similar styles of many (much) more expensive 7750-based chronographs. At $1600, with plenty of available sales at the time, it’s hard to argue with the look and build quality of what I got. It’s been one of my daily-wearers but even I’ll admit it is a little big for my wrist at 46mm. A little wrist heft has never really bothered me, but after wearing it for a while, running it through the wringer, I found myself saying, “It would be perfect for me if it were just a little smaller.” Enter the Tockr D-Day C-47. 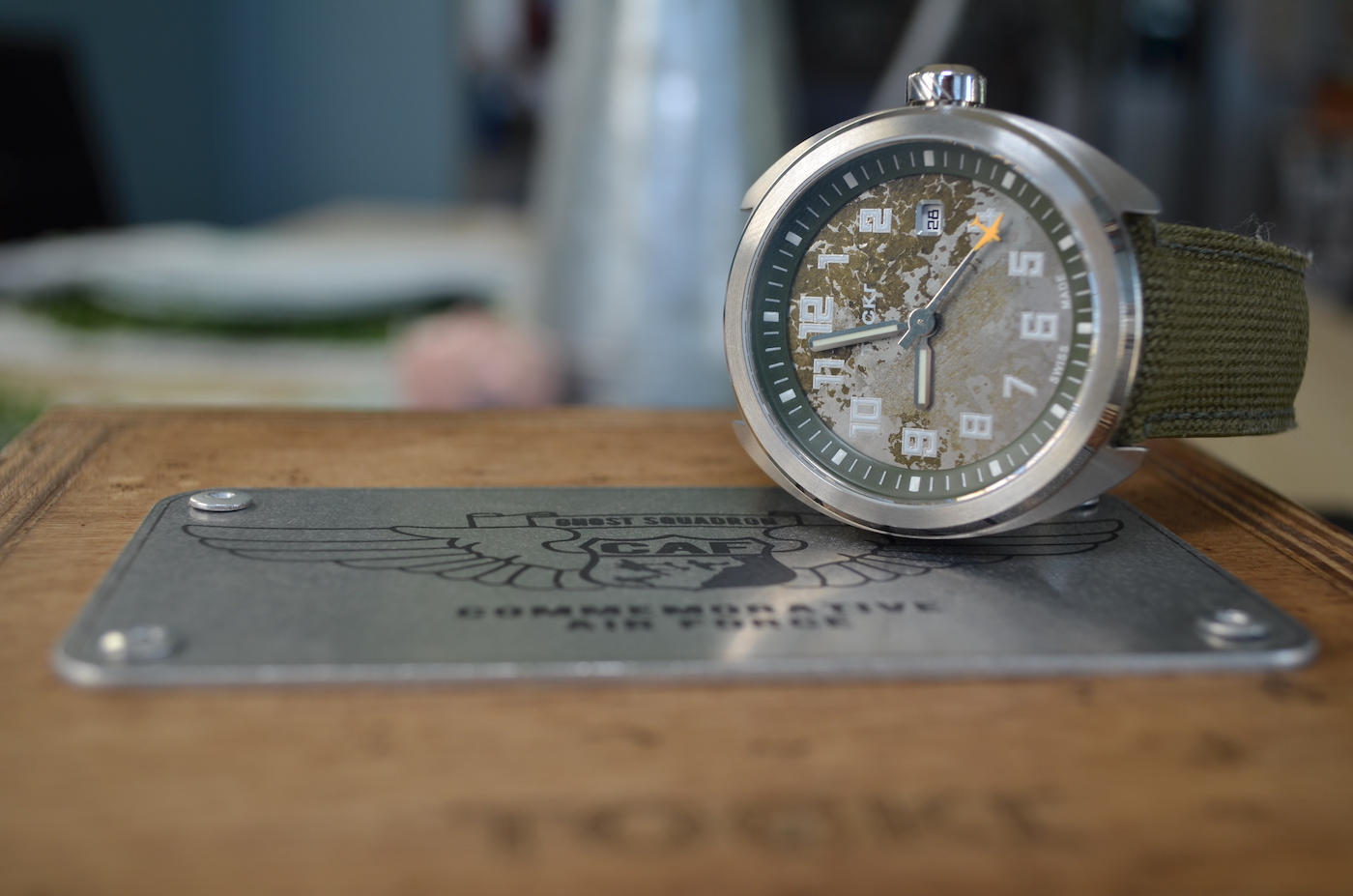 The brushed stainless steel cushion-esque case comes fitted with a sapphire crystal and measures in at a mere 42mm x 13.5mm. I say “mere” because, to my knowledge, this has been the smallest case size the brand has produced by a large margin (My Air Defender is 46mm and actually feels bigger because of the compressor bezel and crown). The diameter being a more reasonable wear means that this watch simply looks good on my medium-sized wrist. While I’m not typically opposed to larger watches because I don’t mind some heft, the D-Day gives me the best of both worlds, mostly due to thickness and weight. 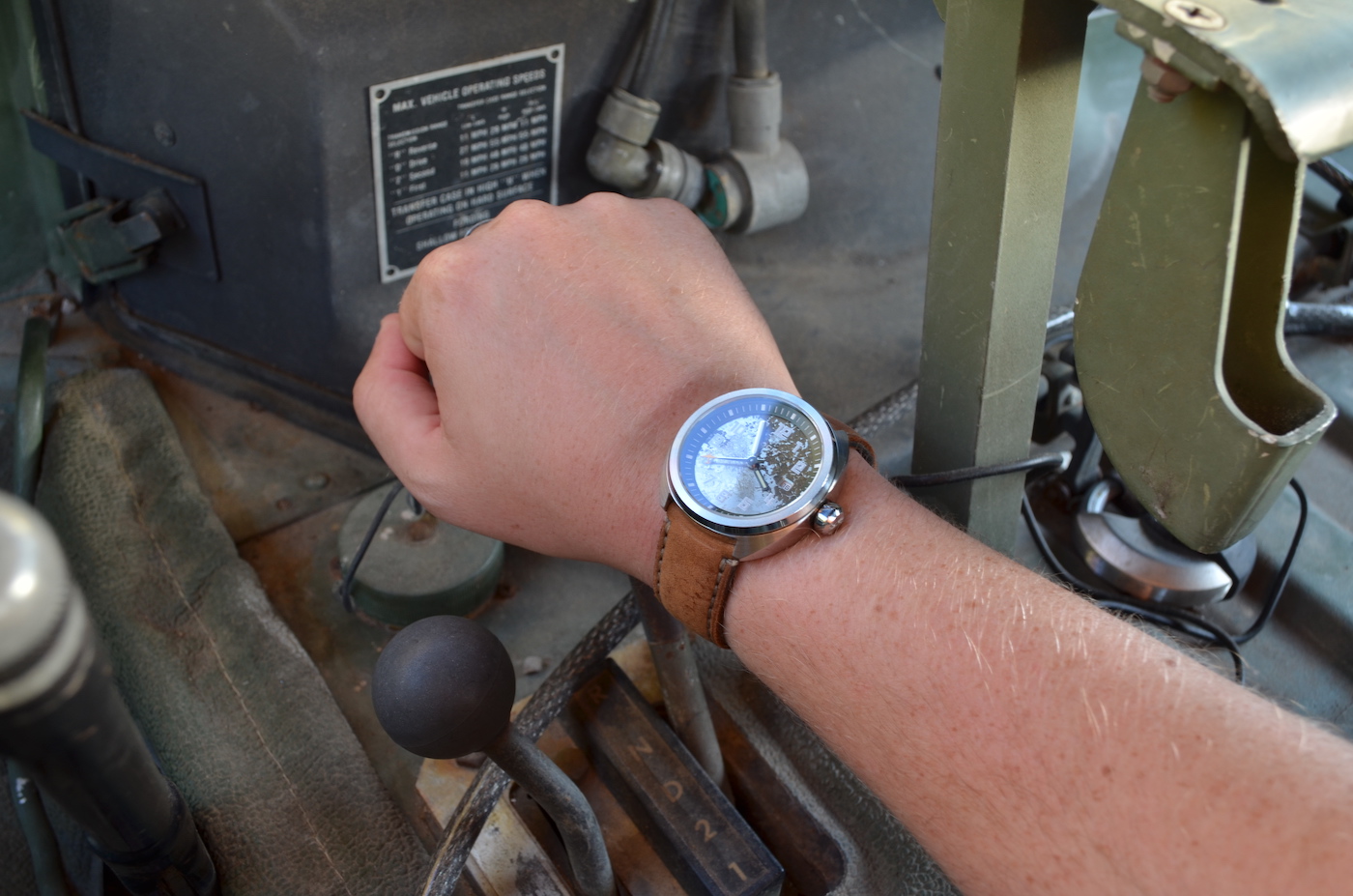 To make room for the movement and dial plate (more on that in a second), the watch has a pretty pronounced profile. It sits really tall on the wrist. This means that I had to pay attention to swinging motions and the edge of desks. The 42mm size also comes with a hefty weight, even on the canvas strap. This was a testament to the fantastic build quality. While the thickness and weight may be a turnoff for many, I found myself appreciating the fact that even this modestly sized watch can still feel predominantly masculine and hefty without being cumbersome.

My only gripe about the case is that the strap felt too low, leaving a slightly awkward gap between the top of the strap and the top of the case. While that can come with the territory of cushion-style cases, it was noticeable pretty quickly when turning your wrist slightly to the side. I think the watch would have benefited from a thicker-based fitted strap instead of a straight canvas one. 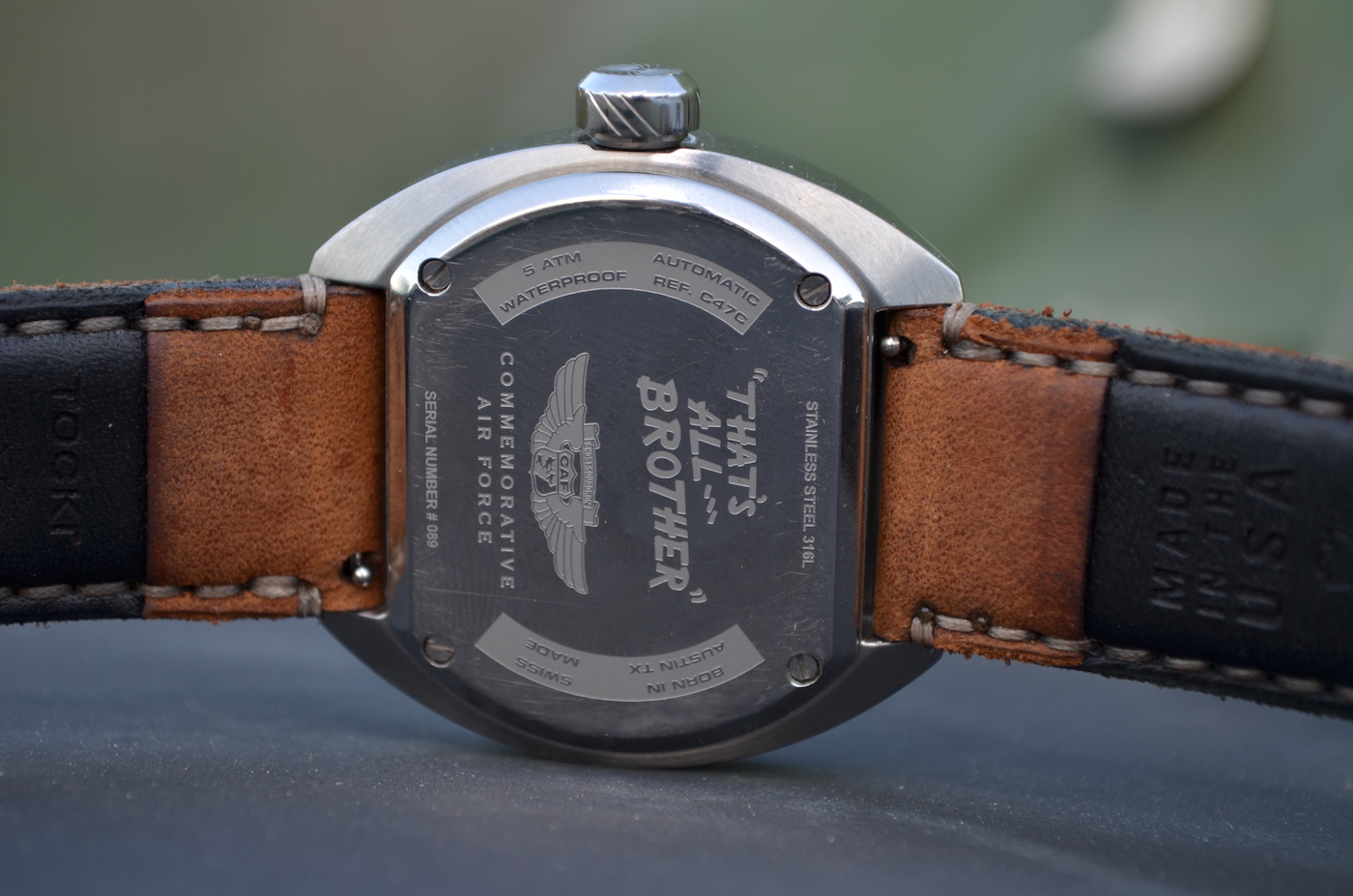 The screw-down caseback features a motif of the “That’s All, Brother” airplane with some typical Tockr branding and verbiage around the edge. The watch features an ETA movement, but I don’t miss seeing another one of those through a sapphire caseback, and I feel that the motif fits the overall aesthetic better, anyway. Despite the screw-down caseback, the watch features 50-meter water resistance — a bit small, but I don’t particularly see anyone using this watch for any extreme water sports or deep diving. 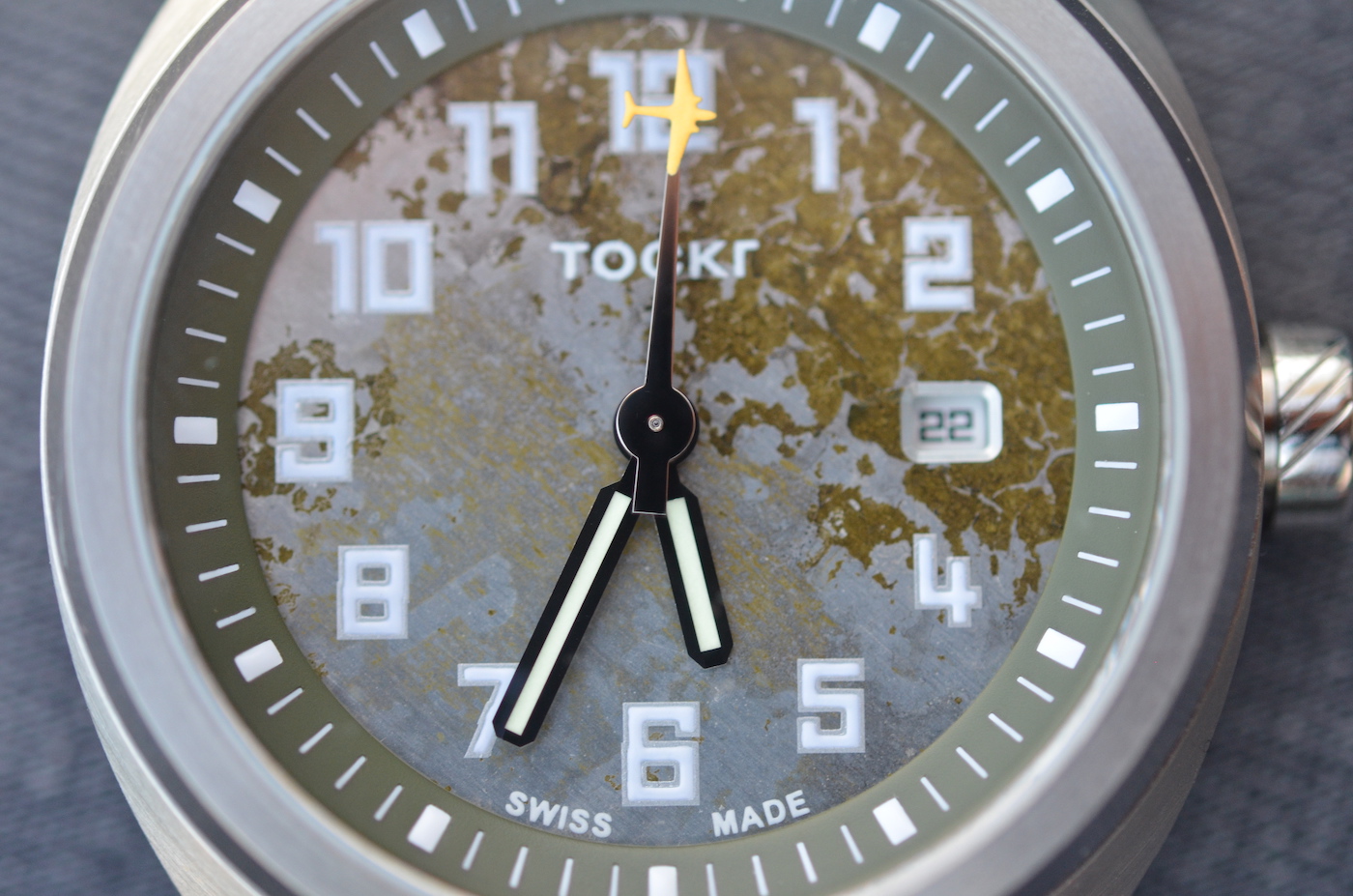 The dial plate utilizes a full circle of salvaged metal from the “That’s All, Brother” airplane, known for leading the invasion of Normandy. The plane currently sits at the Commemorative Air Force Museum in Texas. Having a relationship with them, Tockr was able to acquire the salvaged metal in a number of variations. The production model of the D-Day will come in three variations: “Clean Cut, Stamped, and Hard Worn.” I have an example of a “Hard Worn” model. 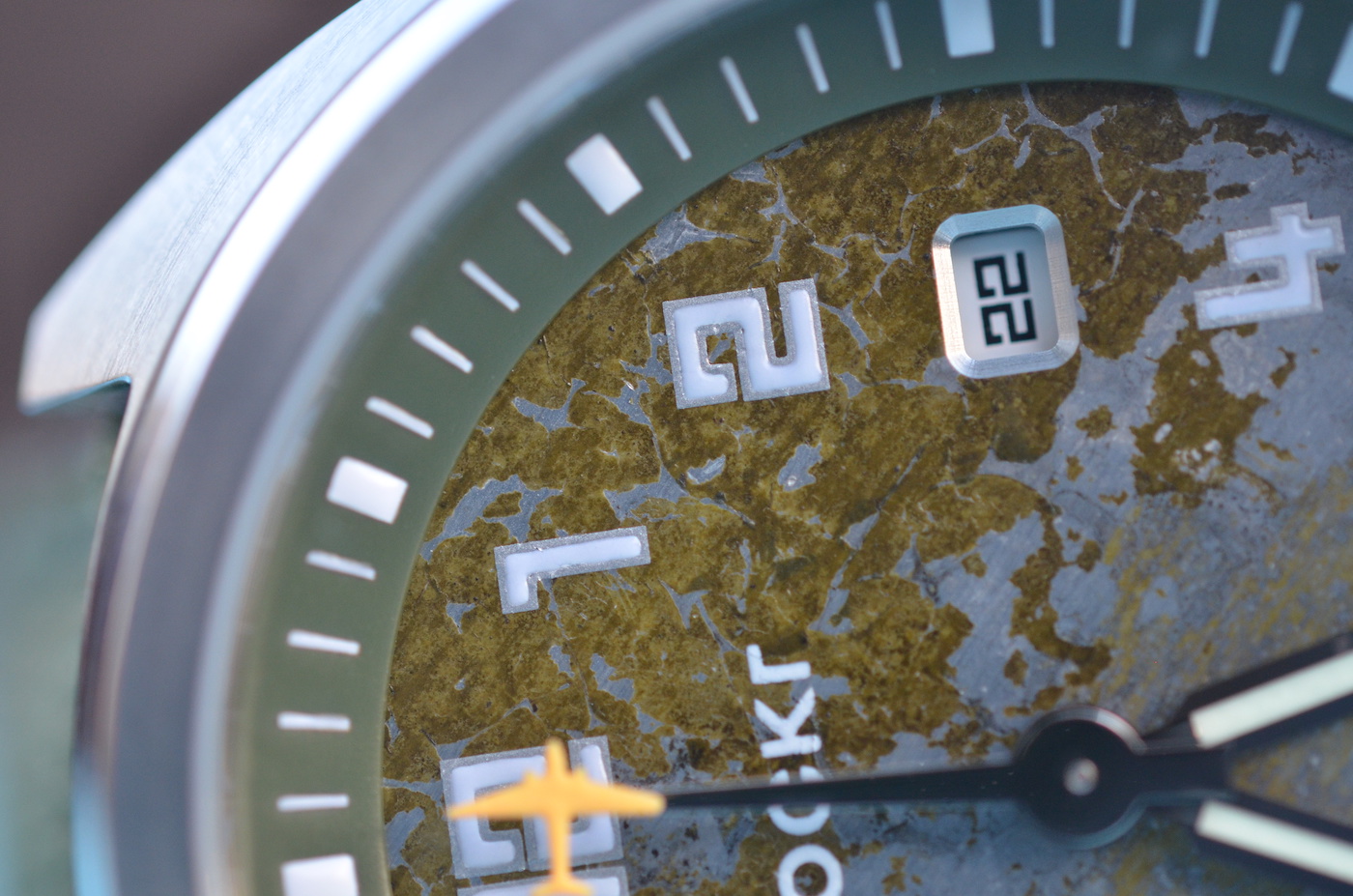 Tockr has historically used applied stick indices in its Air Defender models. In a departure from that, the brand has gone with printed pilot’s numerals for the D-Day — a fitting and well-done feature of this watch. I’m going to be transparent: When I first saw the renders, I was concerned about legibility on the more worn models, but even this Hard Worn is superbly legible, despite the hefty “damage” of the dial plate. The indices are lume-filled and actually really bright and coherent, another concern I had against the nature of the dial distracting from legibility. Even the date window carved into the plate is well done and doesn’t take away from the overall aesthetic. 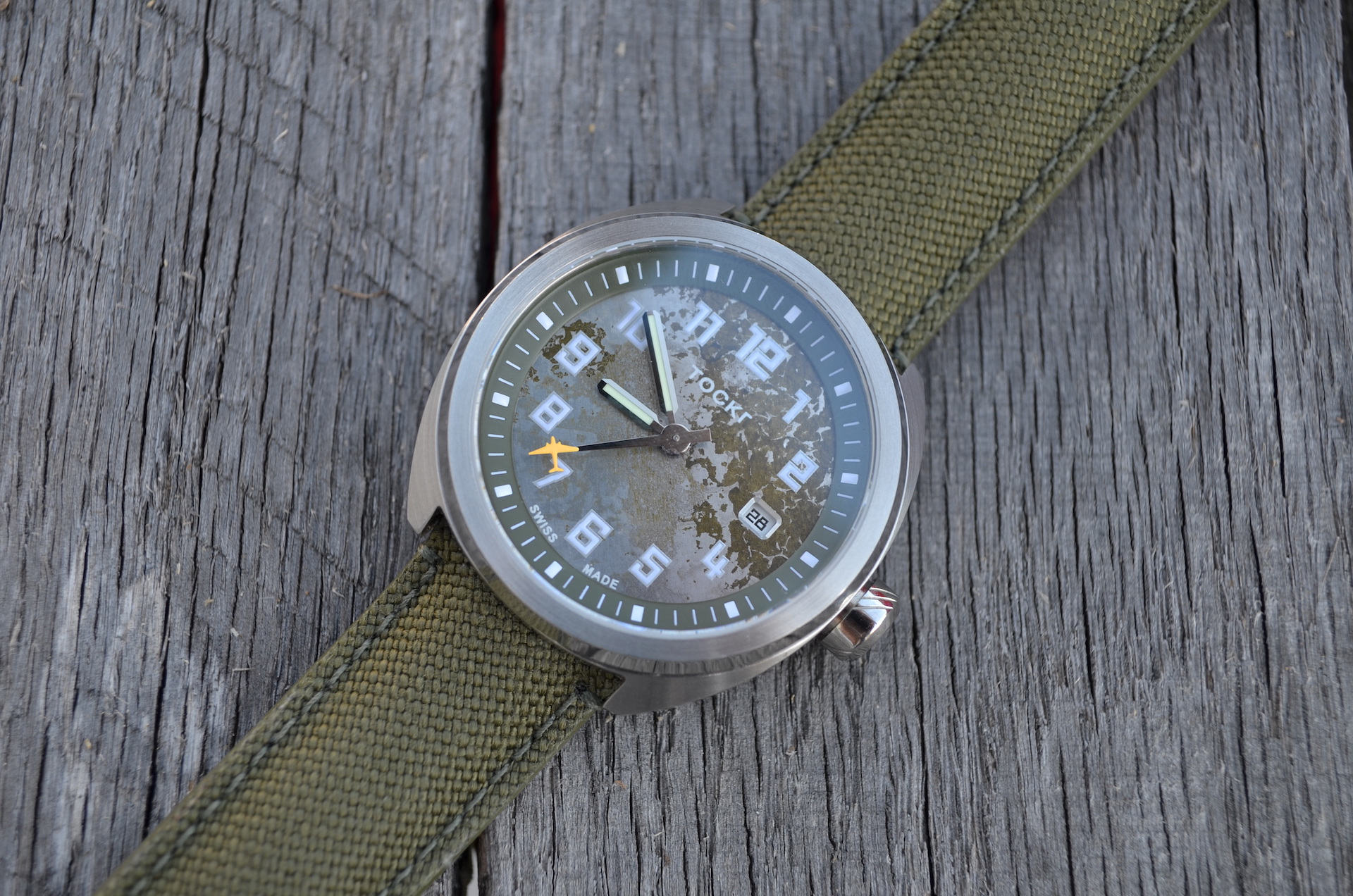 The polished Baton-style hands were a good decision to allow for the pop against what’s arguably a really busy dial. The thin strip of lume in the center breaks up the polish nicely to allow for really crisp nighttime legibility. The coolest feature of the handset is the seconds hand. Instead of a traditional orange or red tip, the watch features a unique lumed orange airplane making its way around the dial.