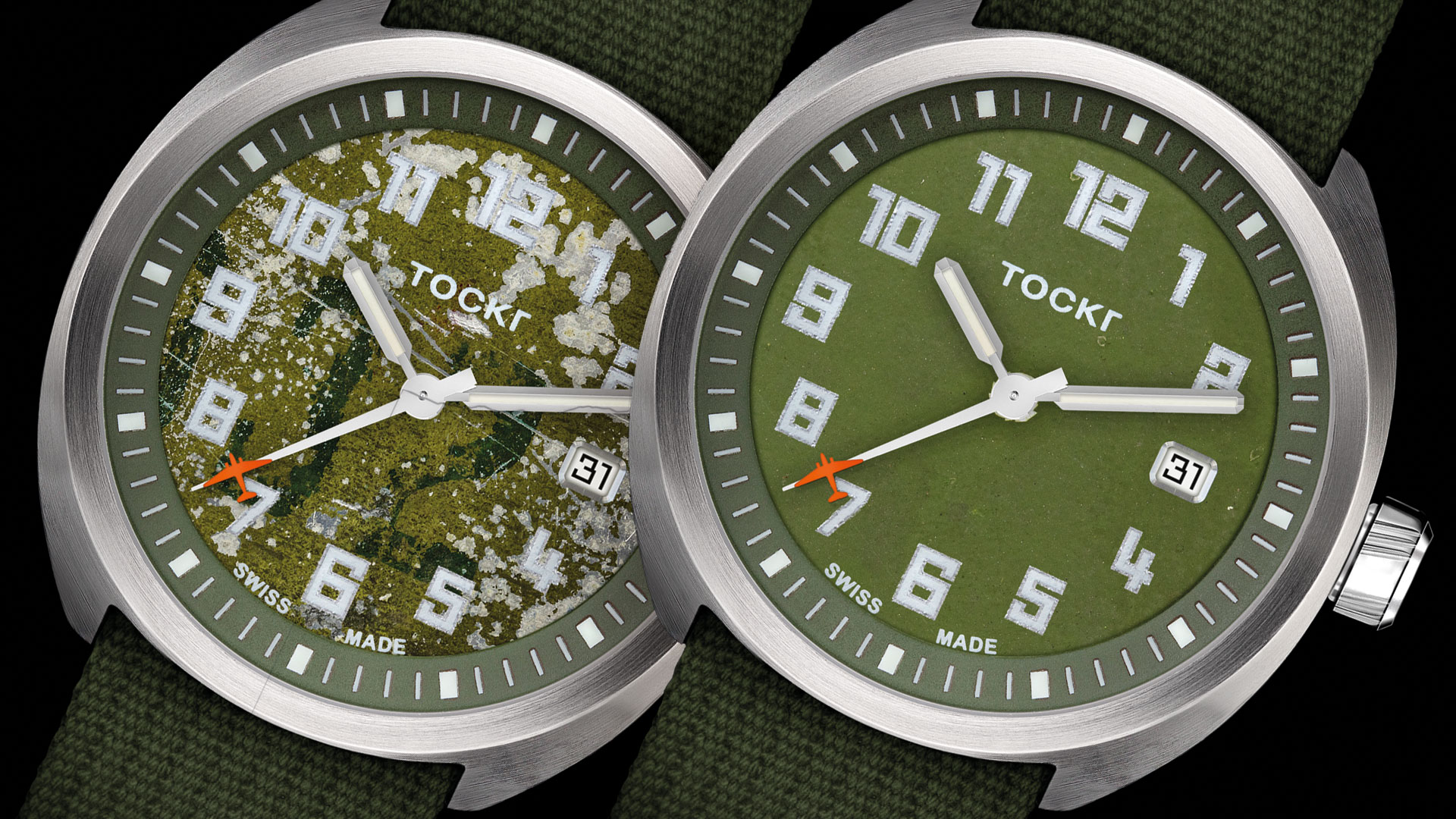 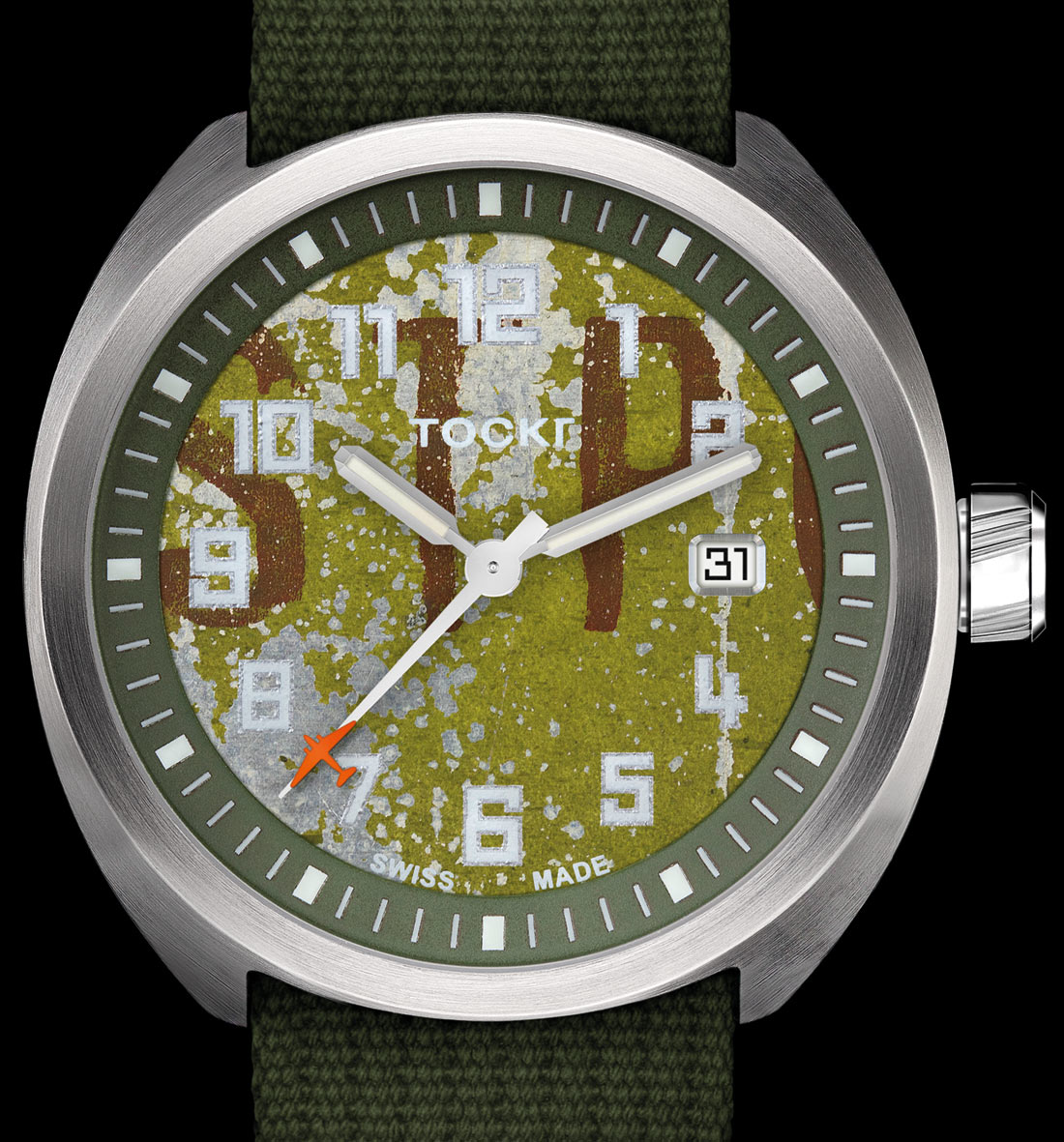 When it comes to aviation-influenced watches, a new kid on the block has created some waves on social media and among enthusiasts. Tockr has released a new watch for its C-47 Collection that is both unique and goes towards a good cause. The Tockr D-Day C-47 Limited Edition is a collaboration with the Commemorative Air Force (CAF) to donate money towards the restoration of a historic C-47 aircraft known as That’s All, Brother – the airplane known for leading the D-Day invasion of Normandy. Each watch utilizes salvaged material from the aircraft to create the dial and a portion of the proceeds will fund the nonprofit’s Historic Preservation Mission in restoring the plane. 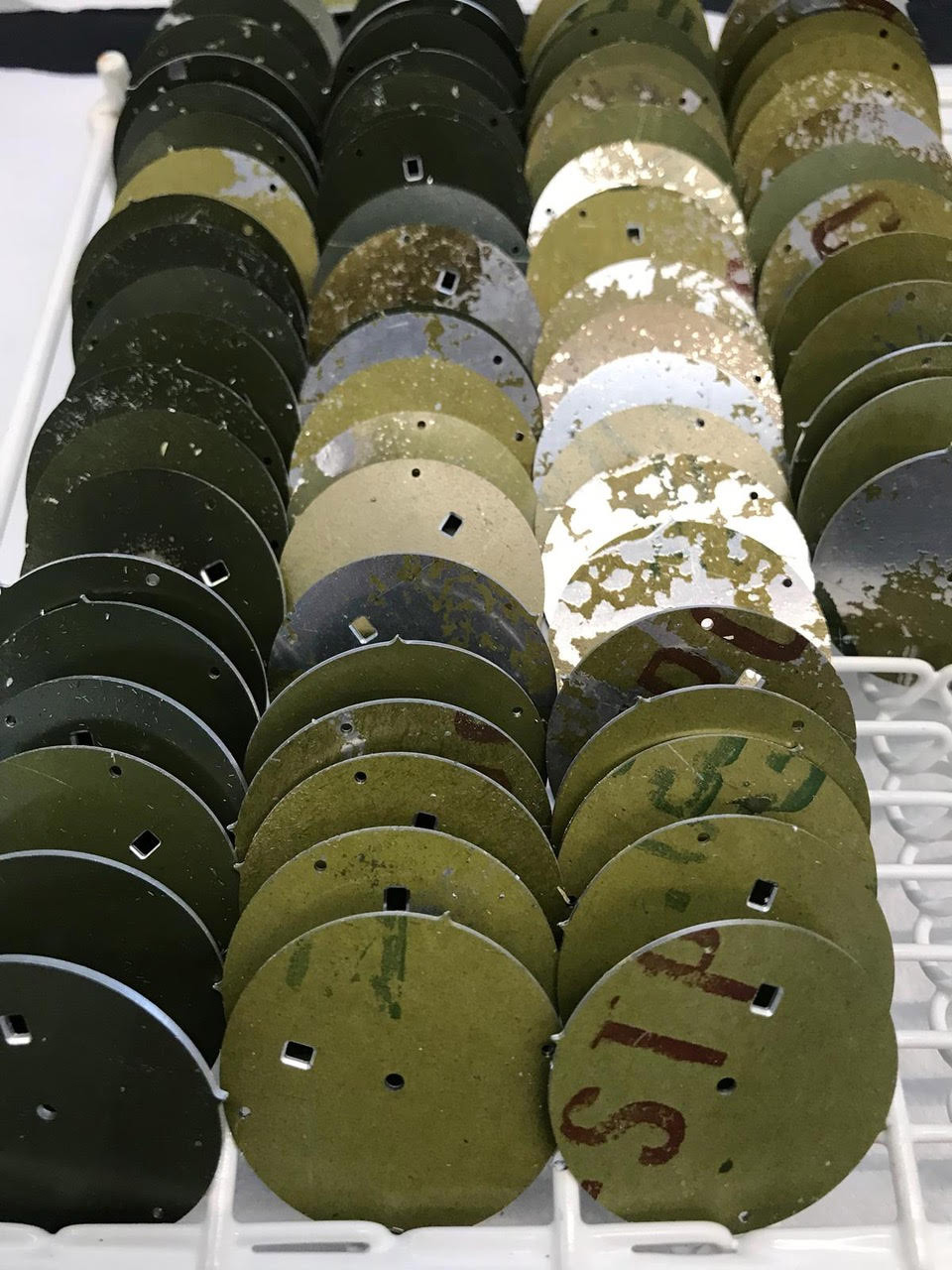 As a quick note, this isn’t the first time we’ve covered watches that use salvaged metals for watch dials and other parts – the Danish brand REC, for example, is more or less based on this concept. However, the Tockr D-Day C-47 instantly reminds me of the Oris Big Crown D.26, a similar collaboration with Hangar 13 for a limited edition watch and aircraft preservation. I’m enthused to see watch brands stepping up for causes, and this is a great fit for Tockr being newer to the industry and an aviation-themed brand. Collaborations are great and all, but collaborations for charitable causes are becoming increasingly popular, and I’m glad to see independents and micro-brands hopping on that train. 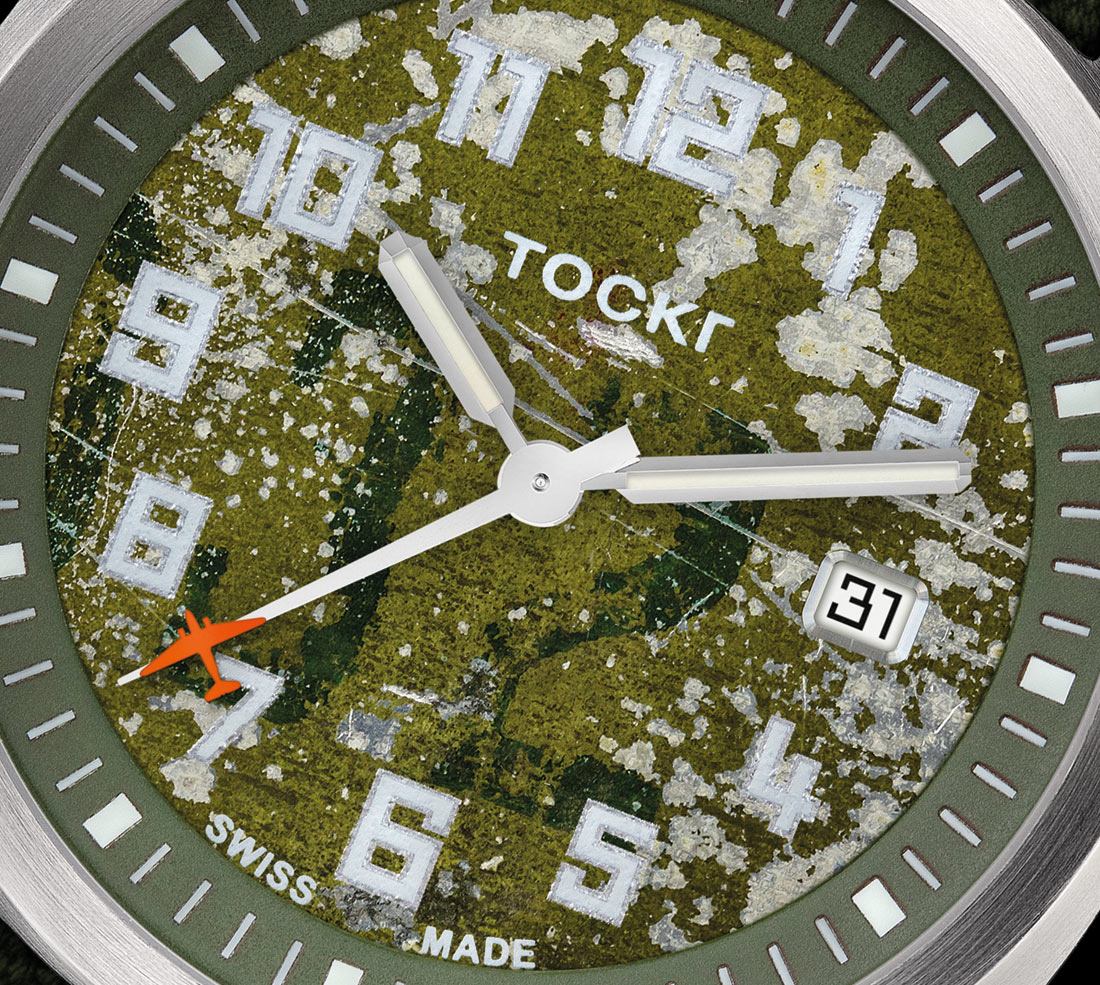 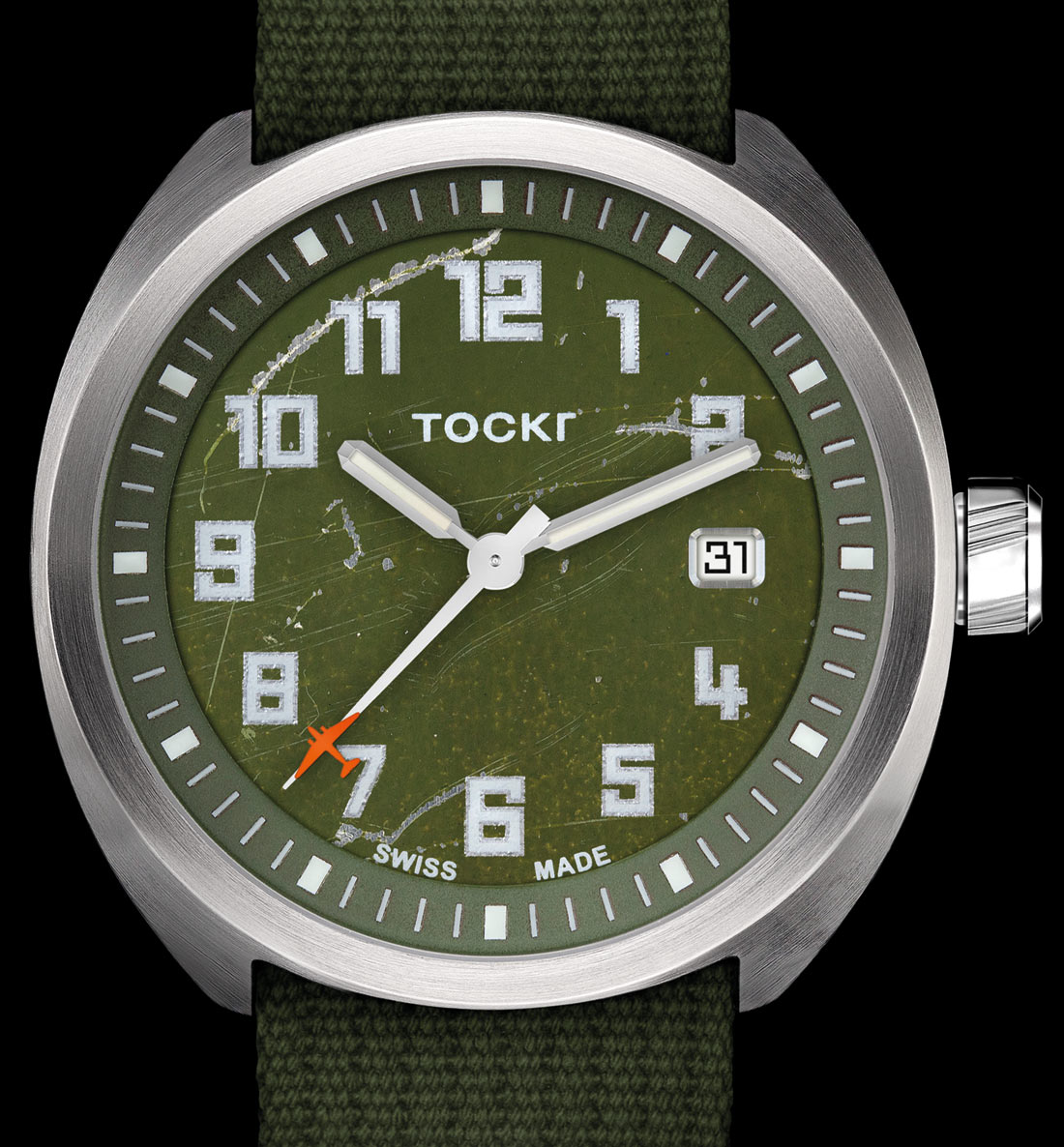 The brushed stainless steel case has a mild cushion shape, and measures in at 42mm. The brand doesn’t readily publish the thickness, and the other C-47 watches have a thick dial plate designed around an old plane’s engine, so that keeps them pretty thick. Even though the Tockr D-Day C-47 doesn’t include the dial plate design, I don’t imagine it’ll be any less thick than its C-47 siblings. Additionally, the watch features a sapphire crystal and fits well with the military green fabric strap that the watch comes on (they throw in an additional leather strap as well). 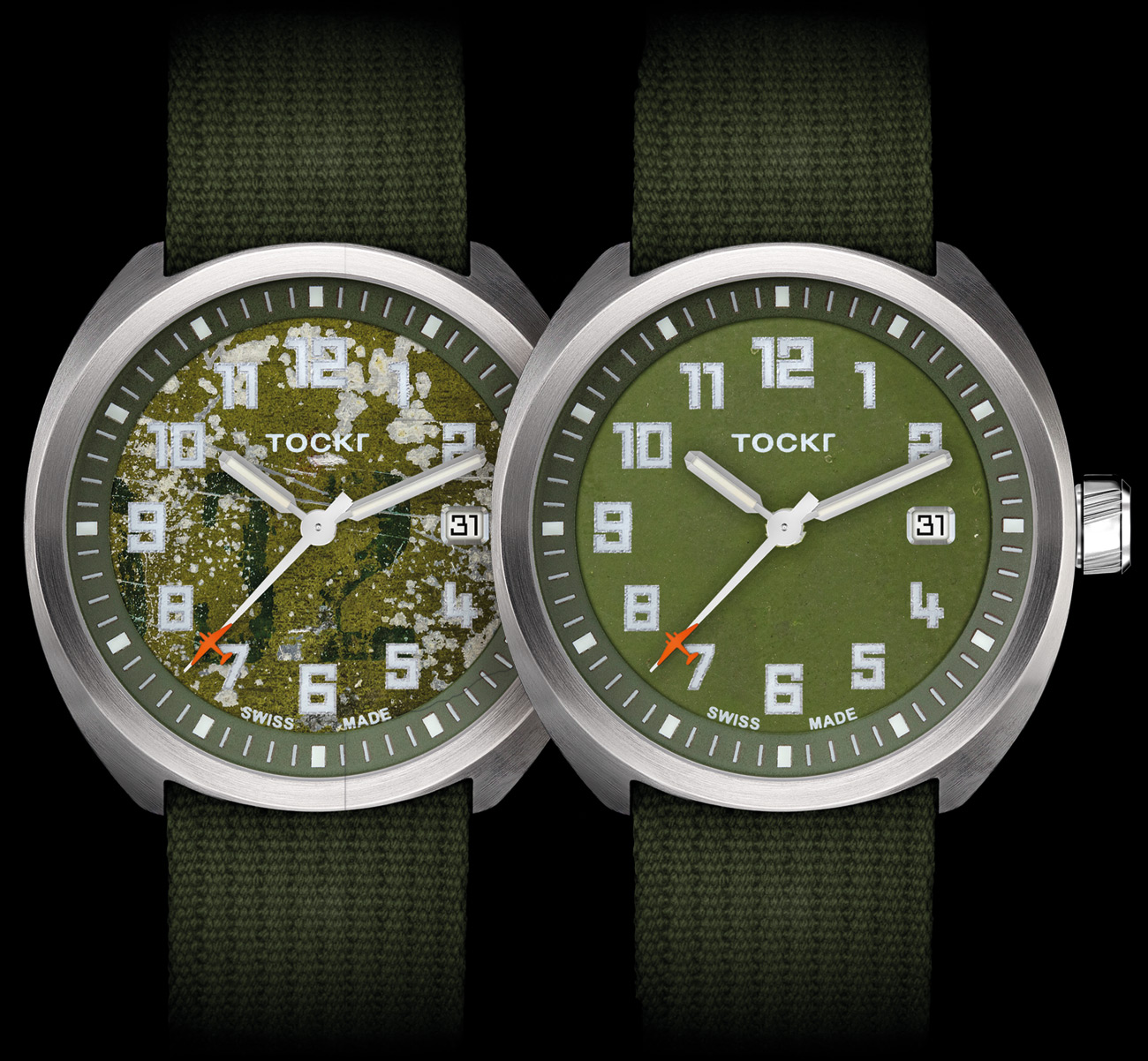 The dial is the real draw here. Each of the 100 limited-edition watches will have a unique dial plate crafted from material from the That’s All, Brother airplane in 3 varying degrees of “weathering.” Some are “clean cut,” some are “stamped,” and some are “hard-worn” – each with a greater variety of exposure. I think this is a novel concept that looks cool in the press images – plus, there’s the added bonus of knowing that nobody has the same exact watch that you do. The hour numerals really give the watch that pilot feel, and to my knowledge, it’s the only model featuring this indicator set. Buttoning up the three-hander nicely is Tockr’s signature baton-style hour and minute hands and an airplane-tipped seconds hand. The only thing I could do without is the date window. 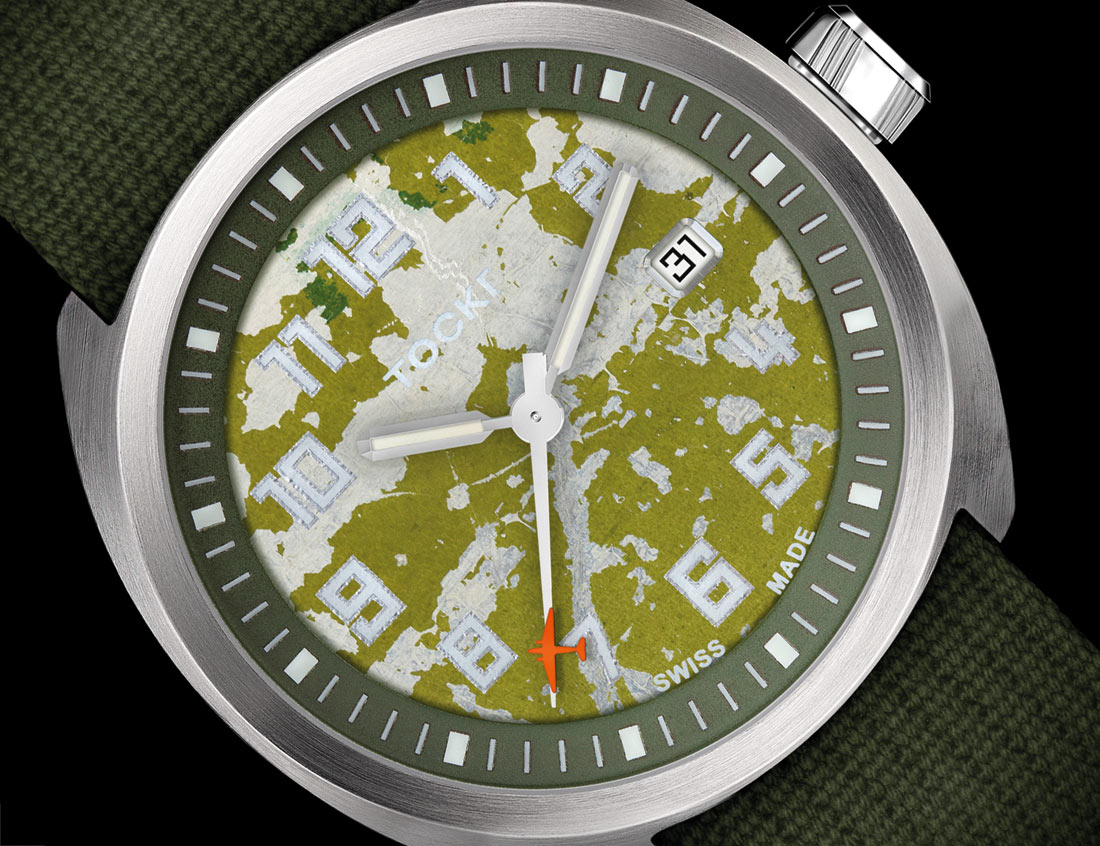 Inside the Tockr D-Day C-47 is an ETA 2824-A6. At this price-point, it’s hard to expect otherwise. The movement features a standard 40-hour power reserve and beats at 4Hz. The solid caseback features a “That’s All, Brother” engraving and the limited edition number of each watch. Additionally, the Tockr D-Day C-47 comes with a signed certificate from the CAF stating that the parts utilized are officially from the aircraft. 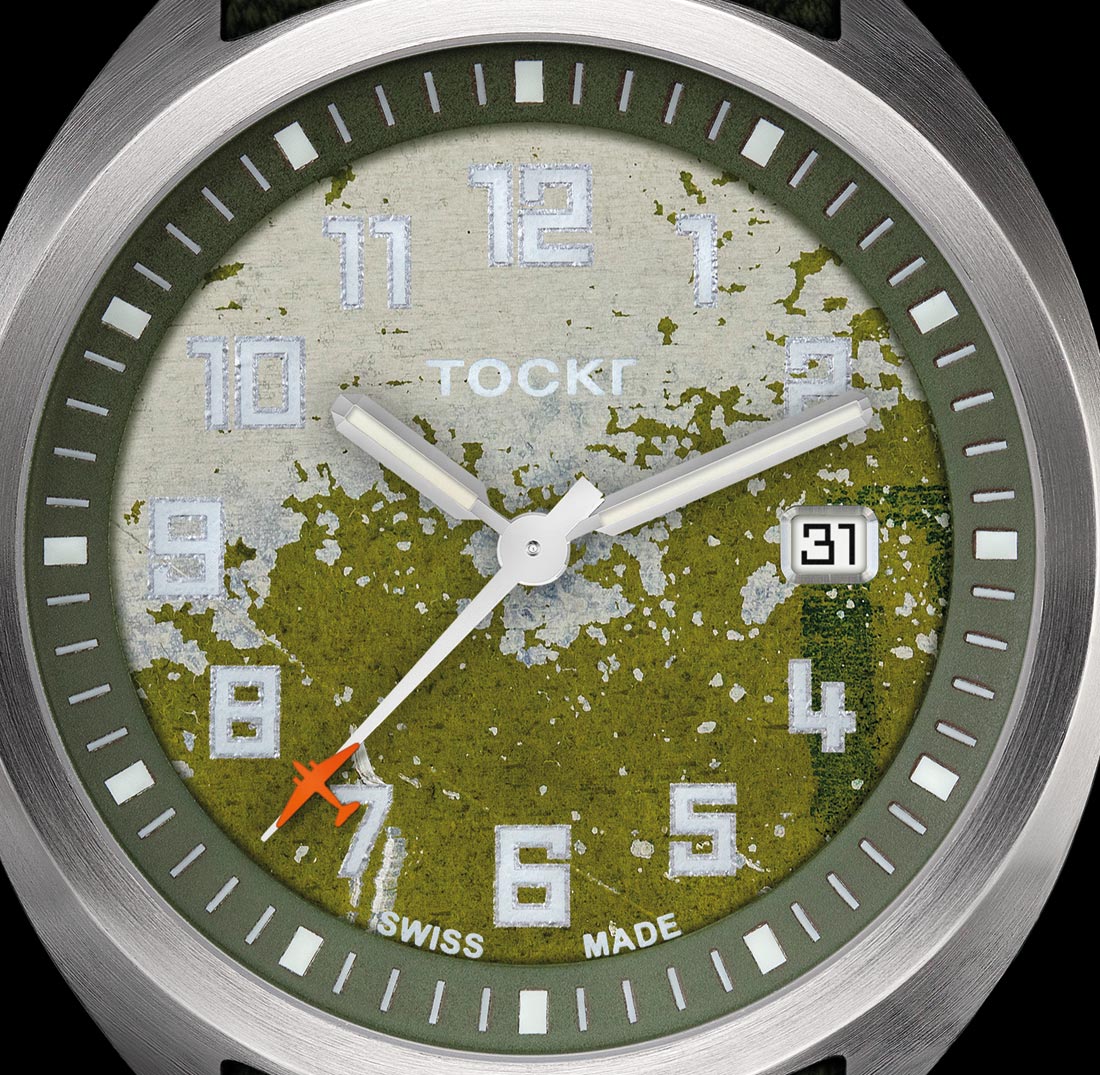 I’ve been intrigued by Tockr. They’re a solid brand with niche appeal, but they’ve become a breakout hit among enthusiasts with far-reaching roots in the collector’s community – we’ve actually given two away, a Tockr C-47 Wing in 2017 and, more recently, a “Hulk” Air Defender Chronograph, which the winner reviewed here. While the C-47 collection has been a… shall we say, niche design, the Air Defender has brought a wider appeal to the brand with an attractive, albeit simple design. That language seems to have made its way to the C-47 collection with the added appeal of a totally unique dial without a drastic price increase to the collection. Plus, the benefit of knowing a portion of your MSRP is going towards a noble cause is a win-win. The Tockr D-Day C-47 Limited Edition is limited to 100 pieces in each “class,” so 300 total, with a price of $1,990. tockr.com