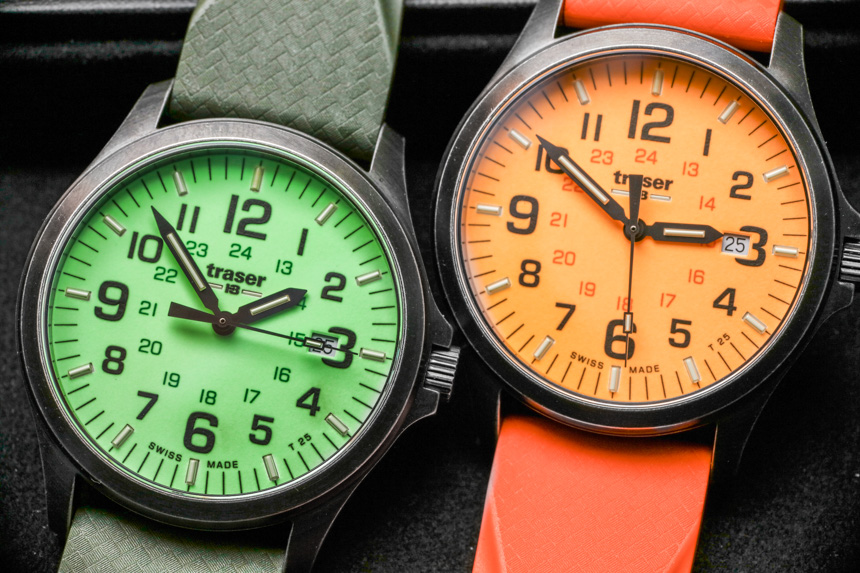 At Baselworld 2017, Swiss Traser introduced a “trendy” tactical watch with the Traser P67 Officer Pro Gun Metal in bright Lime and Orange lumed dials. The watches are not terribly expensive and show a more lighthearted side of the brand which is mostly known for being the in-house brand of MB-Microtec who produces glowing tritium gas tubes. I think there is an appeal to wearing “tactical” watches without always wanting to look too tactical. Of course, not everyone will be into lime green or bright orange on their wrist all the time, but at least for a fun-looking timepiece such as this you don’t need to spend more than $500. 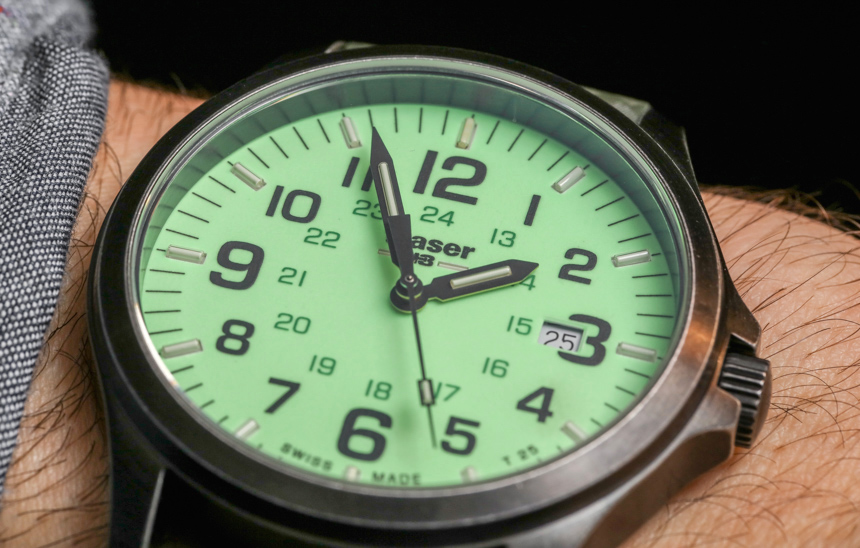 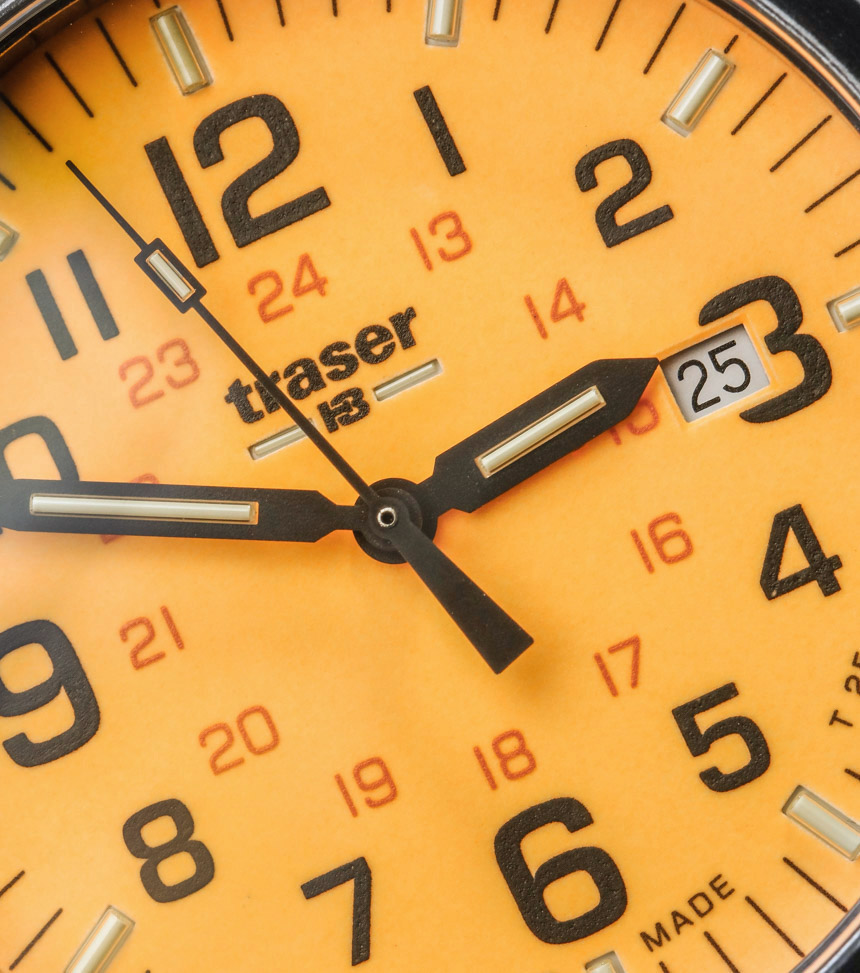 The Traser P67 Officer Pro Gun Metal collection already had black-dialed versions with lime green or orange hour numerals. What is different for 2017 is that the collection now includes these models with dials that are entirely lime green or orange. When mixed with the gun metal-style PVD-coated steel cases and the matching straps, it makes for a neat look. I have a soft spot for functional watches that are more about being a bit loud in style, so I do appreciate stuff like this. 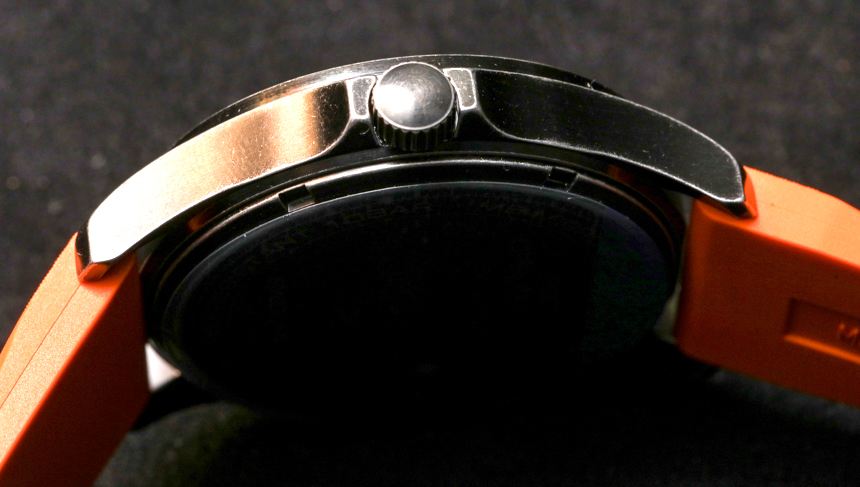 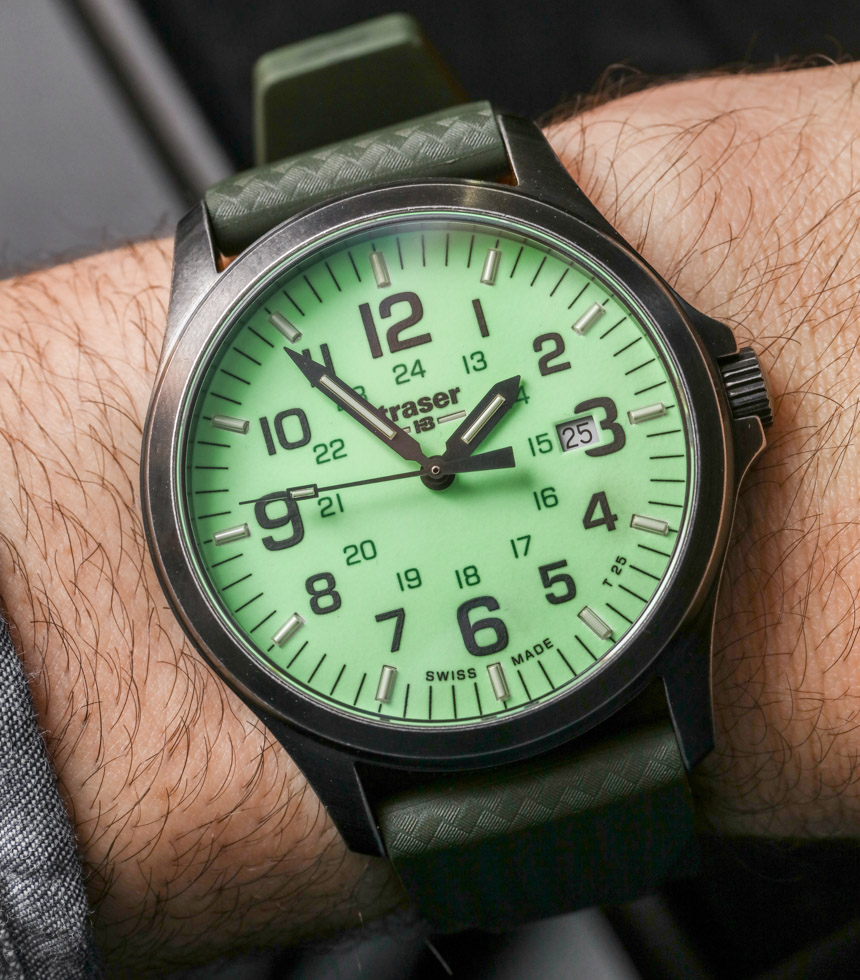 The Traser P67 Officer Pro Gun Metal watch is 42mm wide with an AR-coated sapphire crystal and is water-resistant to 100 meters. The straps are orange or green, and Traser makes a point to indicate that they are “Italian-made natural caoutchouc” straps. For a more discreet look, Traser also sells NATO-style straps in black, with a lime green or orange stripe down the middle. 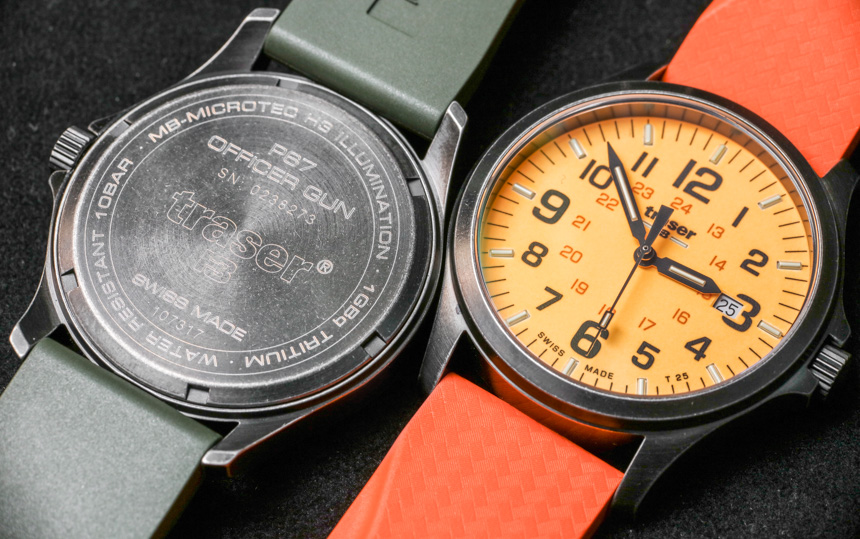 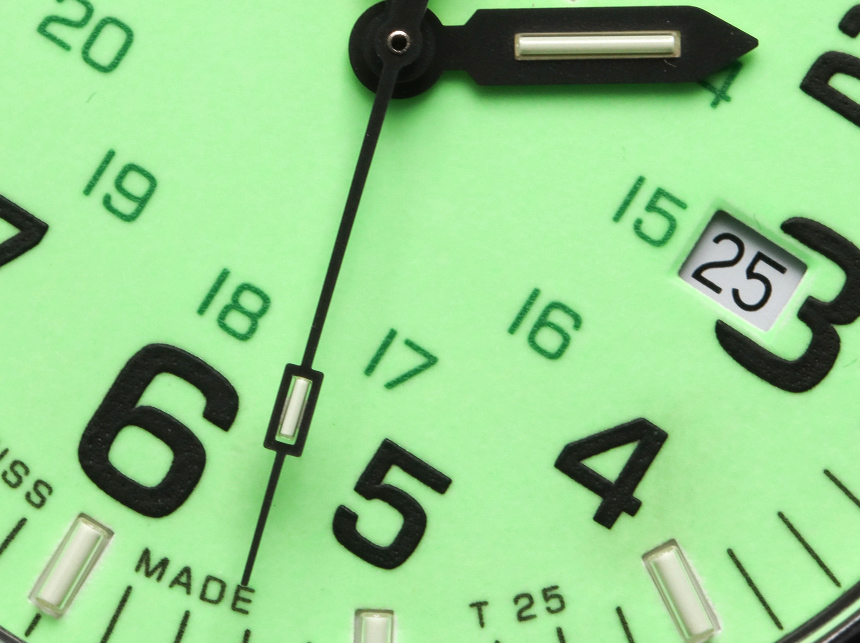 The dials combine Taser’s typical use of Tritium gas tubes, with Super-LumiNova for darkness illumination. There are gas tubes in each of the three hands, as well as the hour markers. Also note the two gas tubes in the logo under 12 o’clock. Traser says these are used to help orient the position of the dial in the dark so that you can more easily read the time – a good thing. The rest of the dial is painted in green or orange Super-LumiNova. This is contrasted by the black hands and Arabic hour numerals. 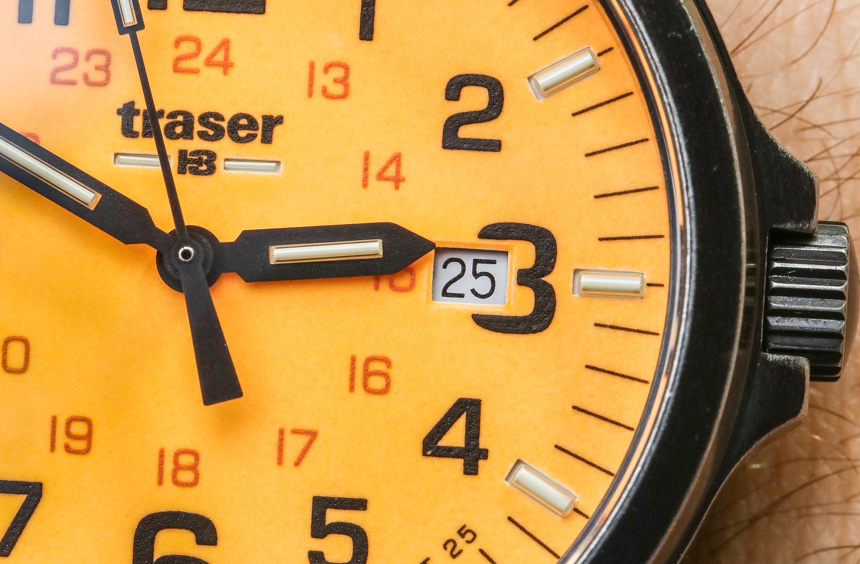 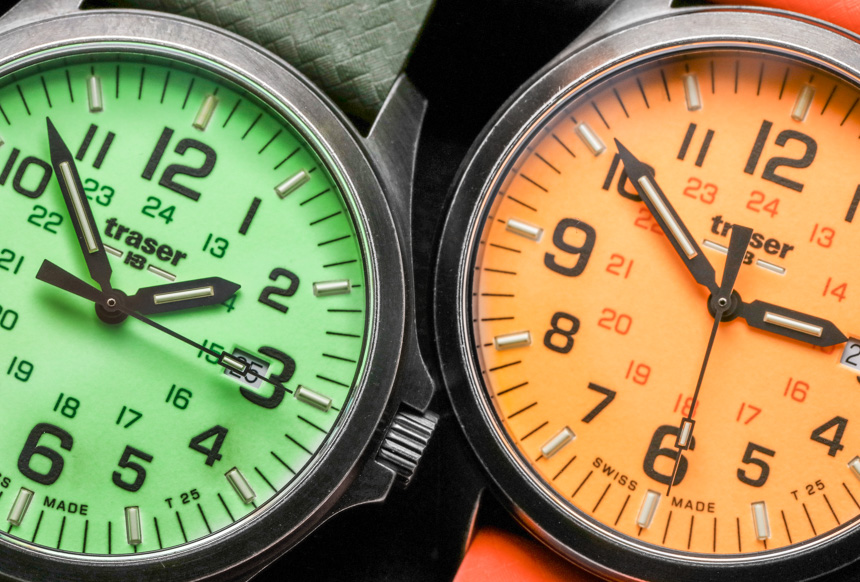 The dial and case are relatively simple, which is part of the utilitarian appeal of the watch. This isn’t trying to be a high-fashion, high-design timepiece. Rather, this is supposed to be an imminently simple watch with a functional character that adds a bit of fun to it. Inside the watch is a Swiss quartz movement. 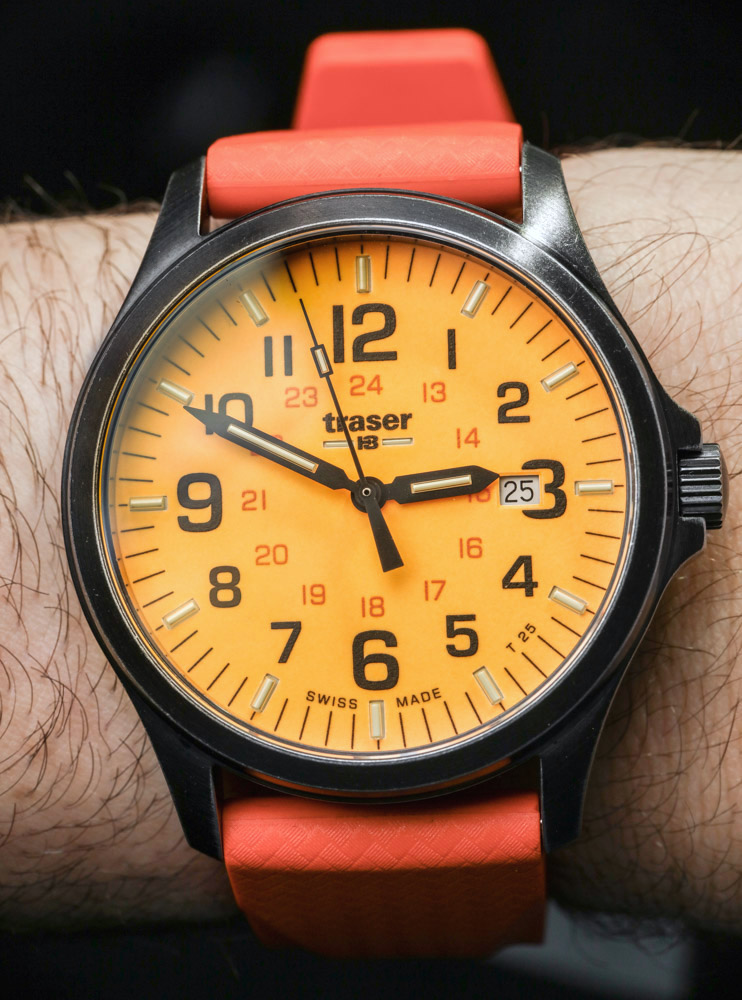 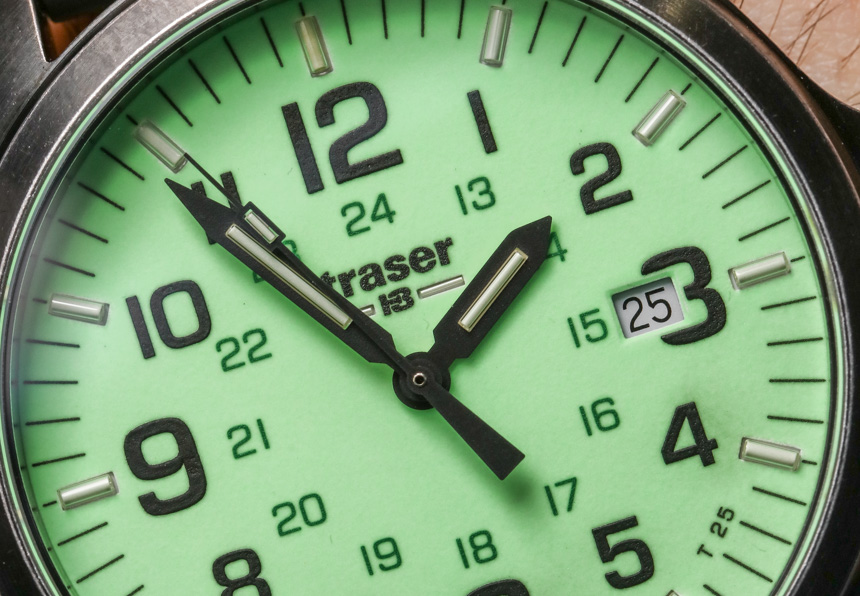 For those who demand excellent legibility in a watch, a high-contrast dial design such as this works very well – and it doesn’t need to be as boring as “black and white.” Moreover, the combination of traditional light-powered Super-LumiNova along with self-illuminated tritium gas tubes makes for a combination that’s difficult to beat. Traser has been looking to increase their popularity as of late, and I am curious to see how they will do that. The brand predates competitors such as Luminox (that also gets their gas tubes from Swiss MB-Microtec), but has for the most part been rather quiet from a marketing perspective. 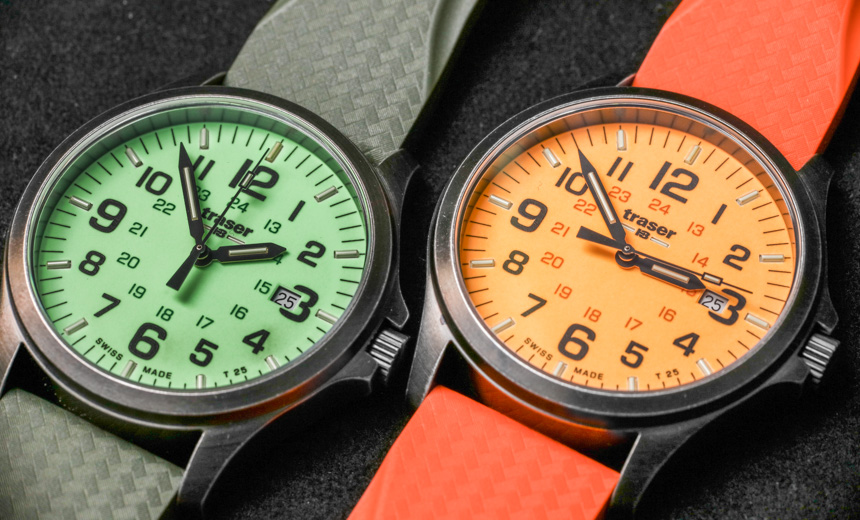 Let’s see if more bold and trendy styles such as the Traser P67 Officer Pro Gun Metal Lime and Orange watches are sign of what is to come from the Traser watch brand. Retail price for the standard black-dialed Officer Pro Gun Metal watches is $395, while these more colorful versions with the orange and green Super-LumiNova dials are $450 USD. traser.com