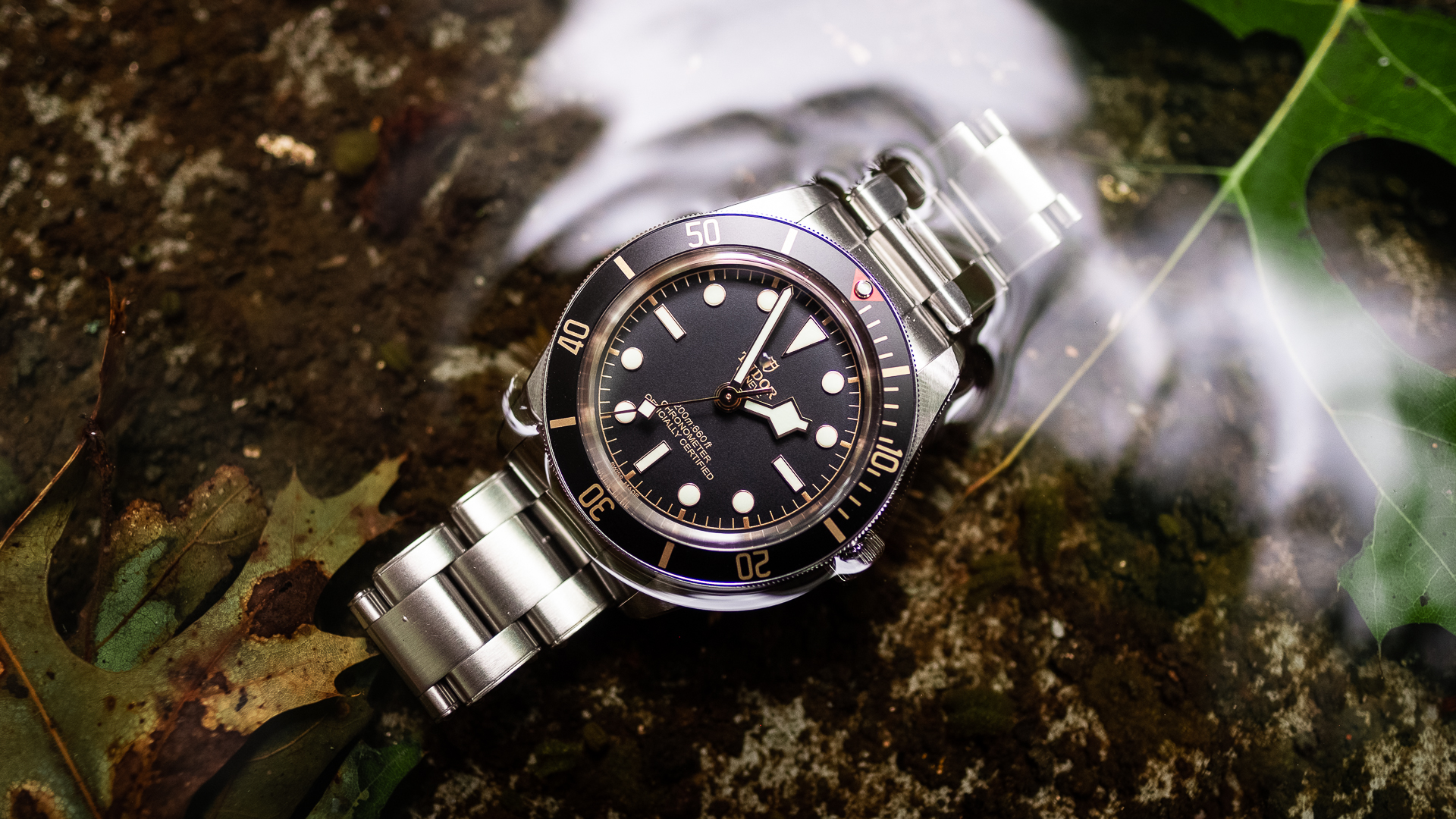 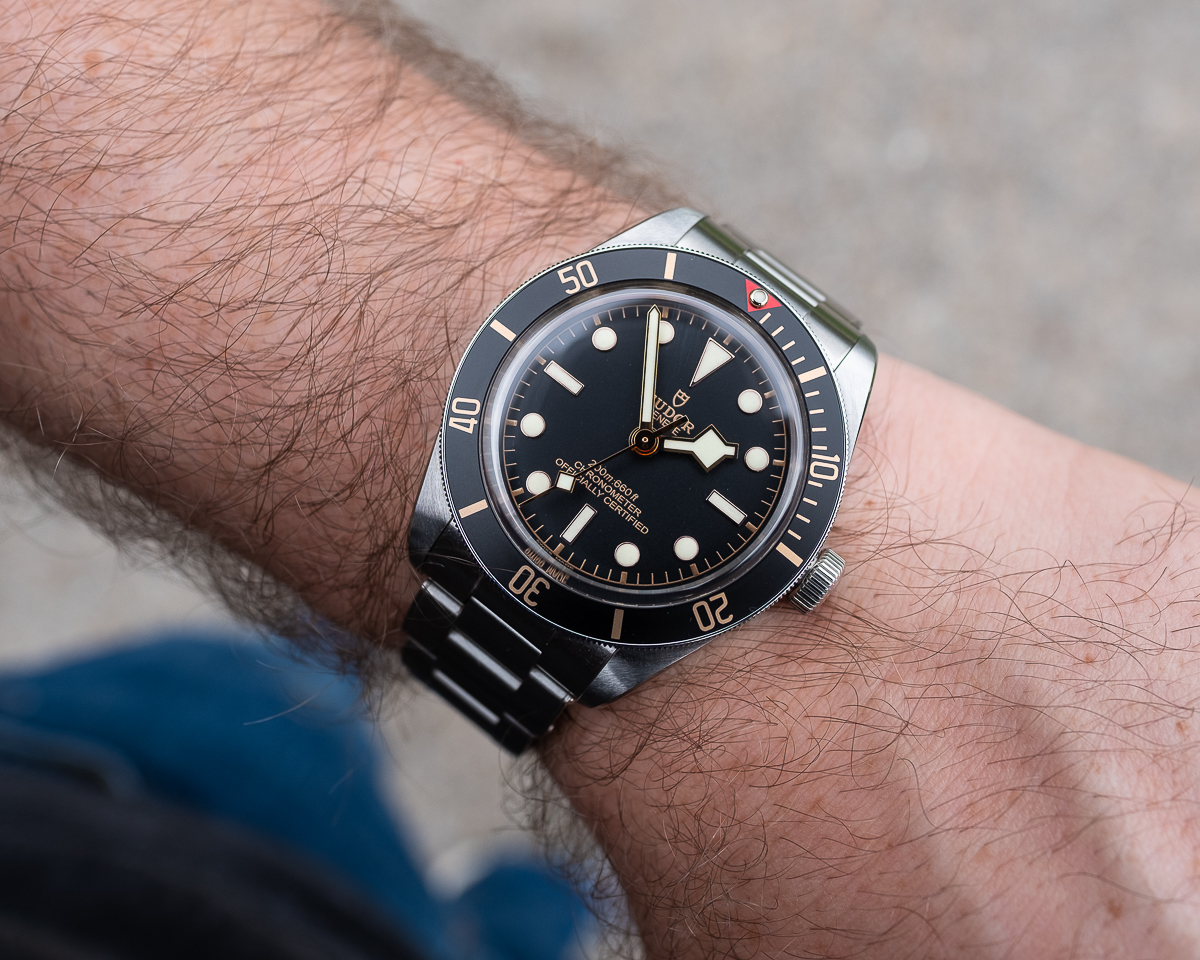 Tudor has been riding the heritage/vintage reissue train for nearly a decade. With the release of the Heritage Chronograph in 2010, and then two years later with the original (ETA-Powered) Black Bay, we saw a dramatic rebirth of a brand that for a long time had lived in big-brother-Rolex’s shadow. Since that time Tudor has focused a lot of energy on developing the Black Bay line; some might say to the deficit of other models in its catalog. But there can be no arguing that they have become fixtures in the modern luxury watch landscape. With the addition of in-house COSC certified movements, the Black Bay moved into its own space – no longer appearing on paper as an apparent compromise on the road to buying an actual Rolex. The 2018 Baselworld announcements brought us the new Tudor Black Bay 58, a “remastered” iteration of the watch with entirely different proportions and a new movement meant to honor the legendary Tudor 7924 Oyster Prince Submariner released in 1958 – the watch that was a follow up to the 7922 which came out in 1954 – Tudor’s first dive watch. 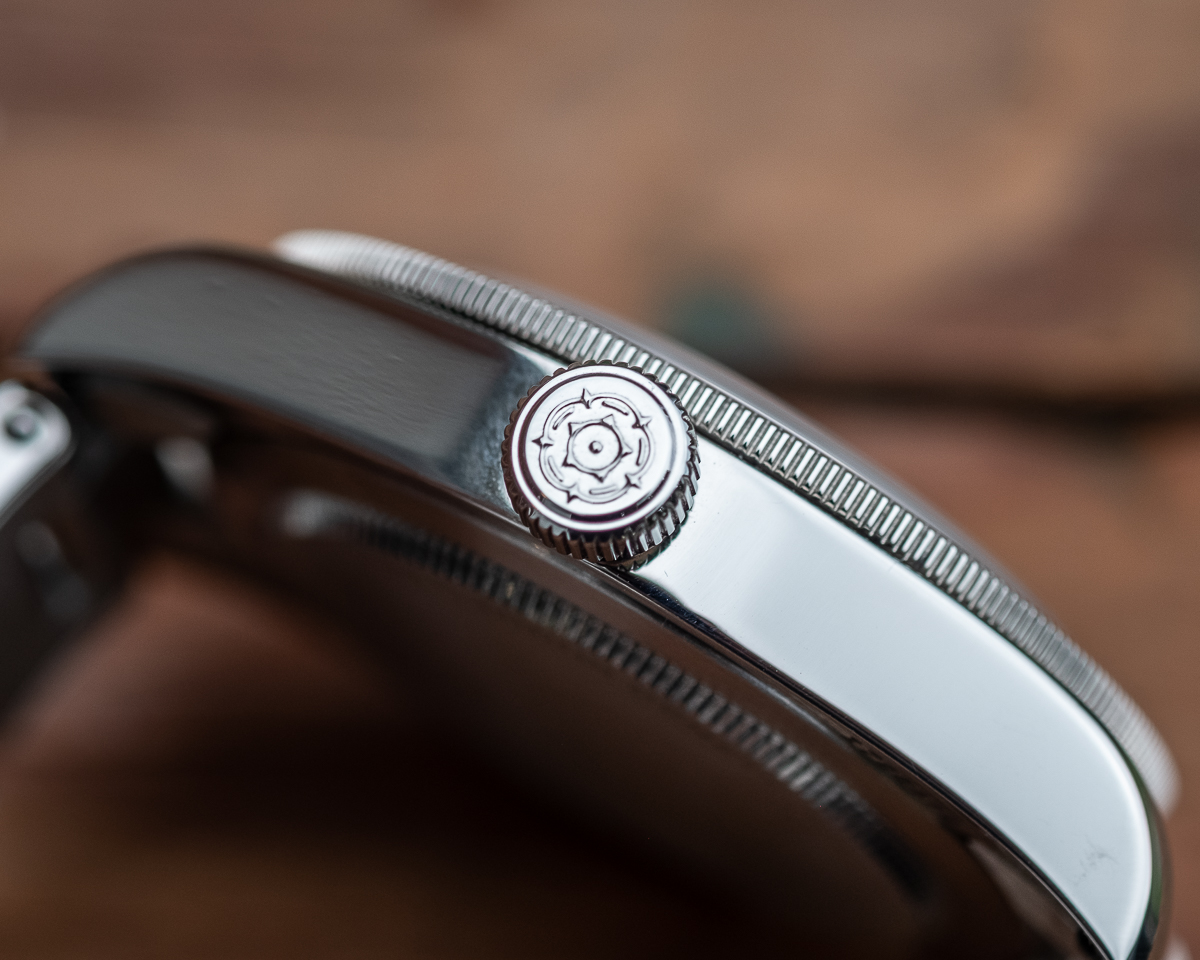 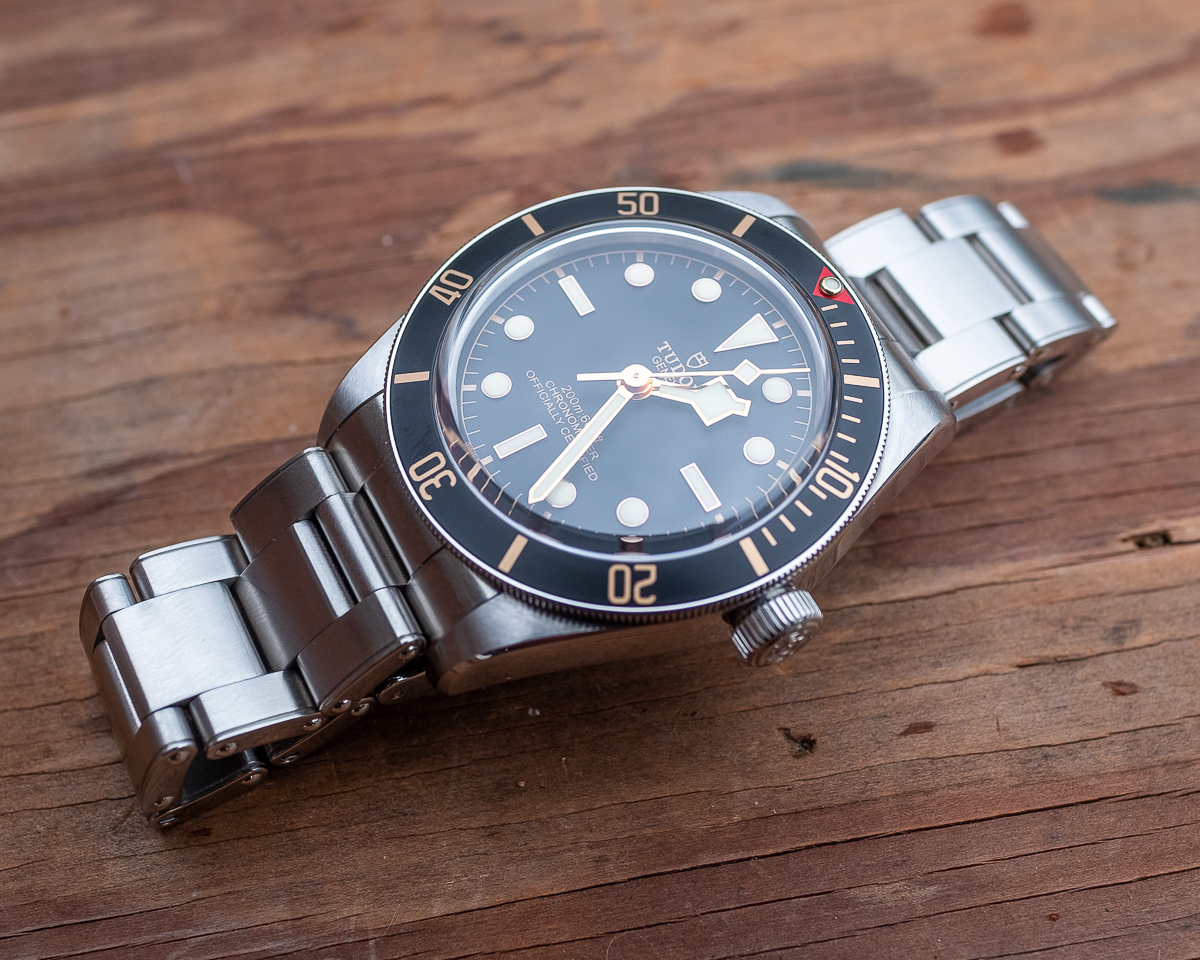 The biggest change from the original line of Black Bays to the new 58 is the size. We went from 41mm to 39mm, from ~14.8mm thick to ~12.01mm, and 22mm lugs to 20mm. This results in a watch that feels… right. I always found the original Black Bays to be a little slab-sided with abrupt expanses of polished steel on either side of the case, whereas the Black Bay 58 hugs the wrist in a comfortable, proportionate manner – that is to say, the watch does not feel tall or bulky. The drape across the wrist is also very nice with a lug to lug of 47.6mm. One thing that I think is worth pointing out, in my opinion, is that the Black Bay 58’s new size feels like how I wanted my previous “regular” sized Black Bays to feel: trim and unobtrusive. I’m sure that there will continue to be a market for both sizes, but on my 7”-ish wrist, the 58 is perfect. 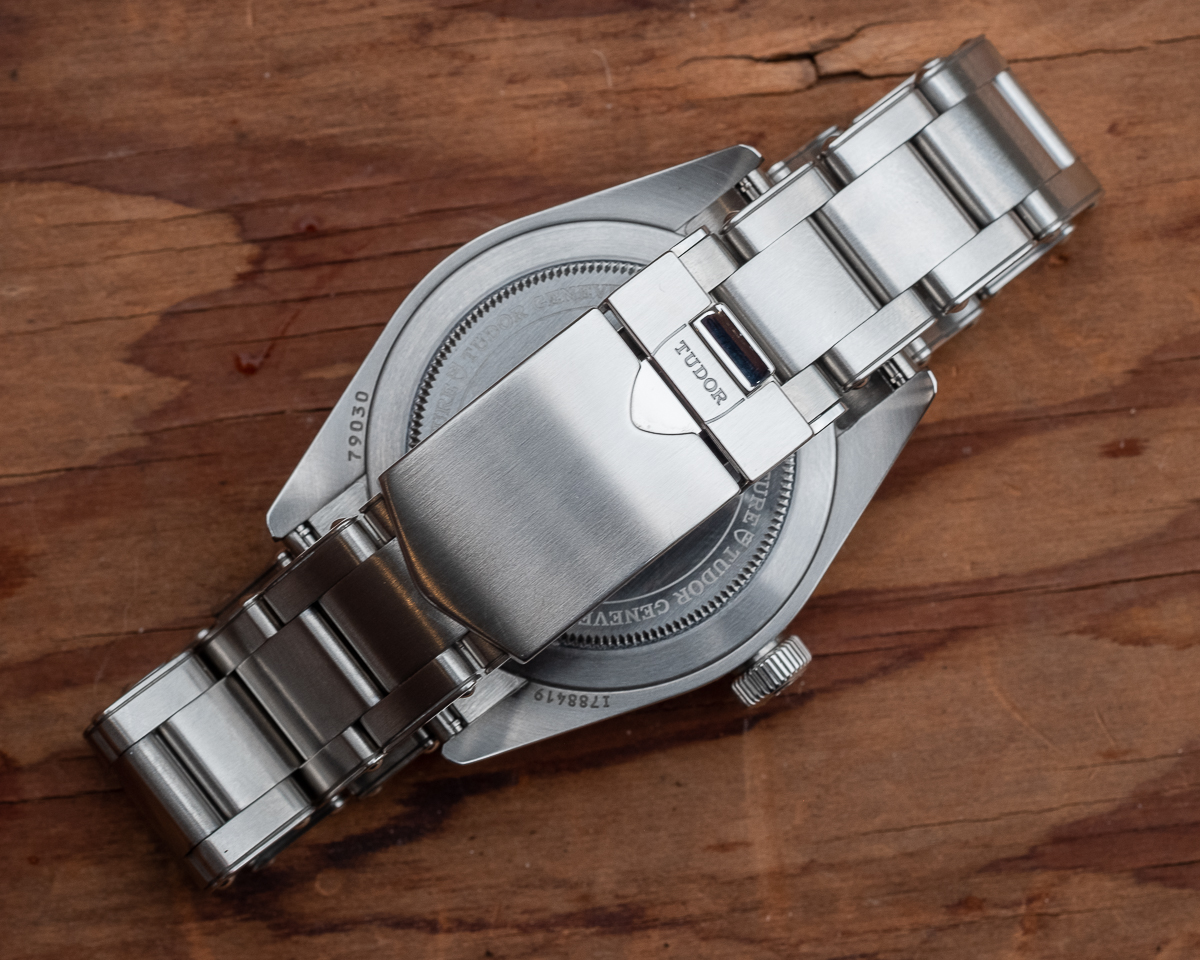 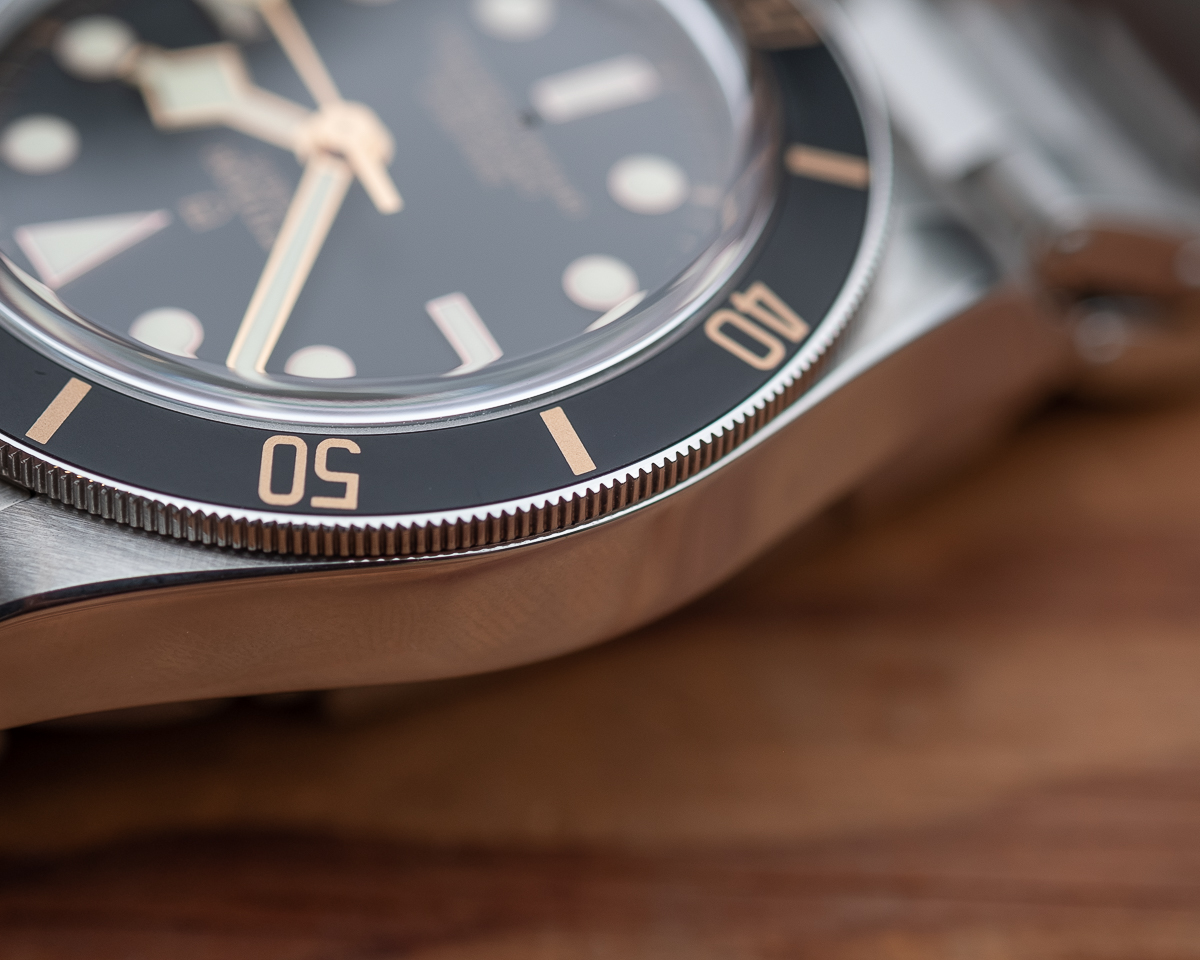 Size difference from the original notwithstanding, the Black Bay 58 gets the full measure of what Tudor has to offer when it comes to finishing and embellishments. A fine polished micro bevel separates the top of the case from the sides. The bezel has a nicely coined edge that provides just the right amount of grip for a turn. One thing that I have noticed on the 58 is that the bracelet end link sits ever so slightly lower than the lugs. While this doesn’t really affect performance or comfort, it does break the lines visually – just a minor gripe. 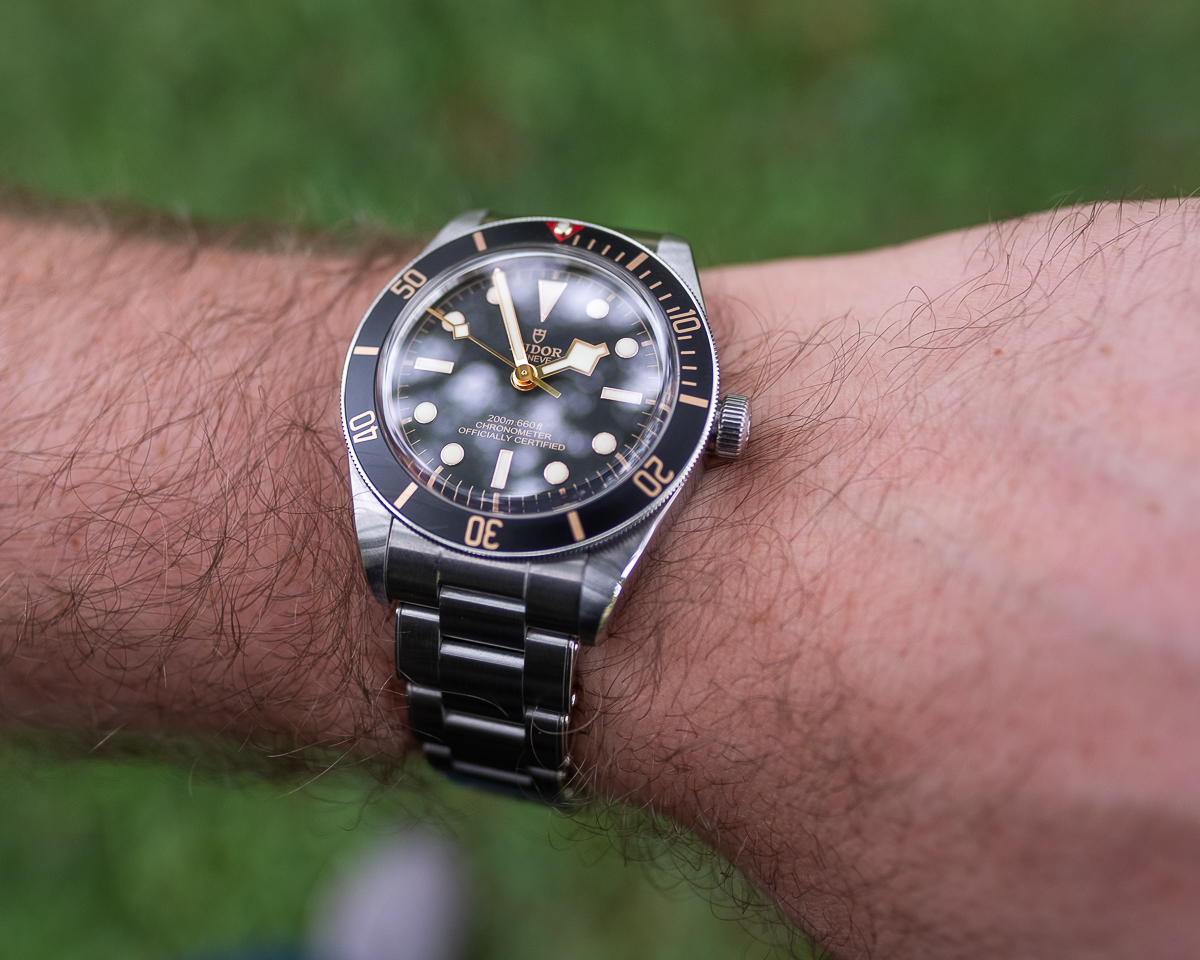 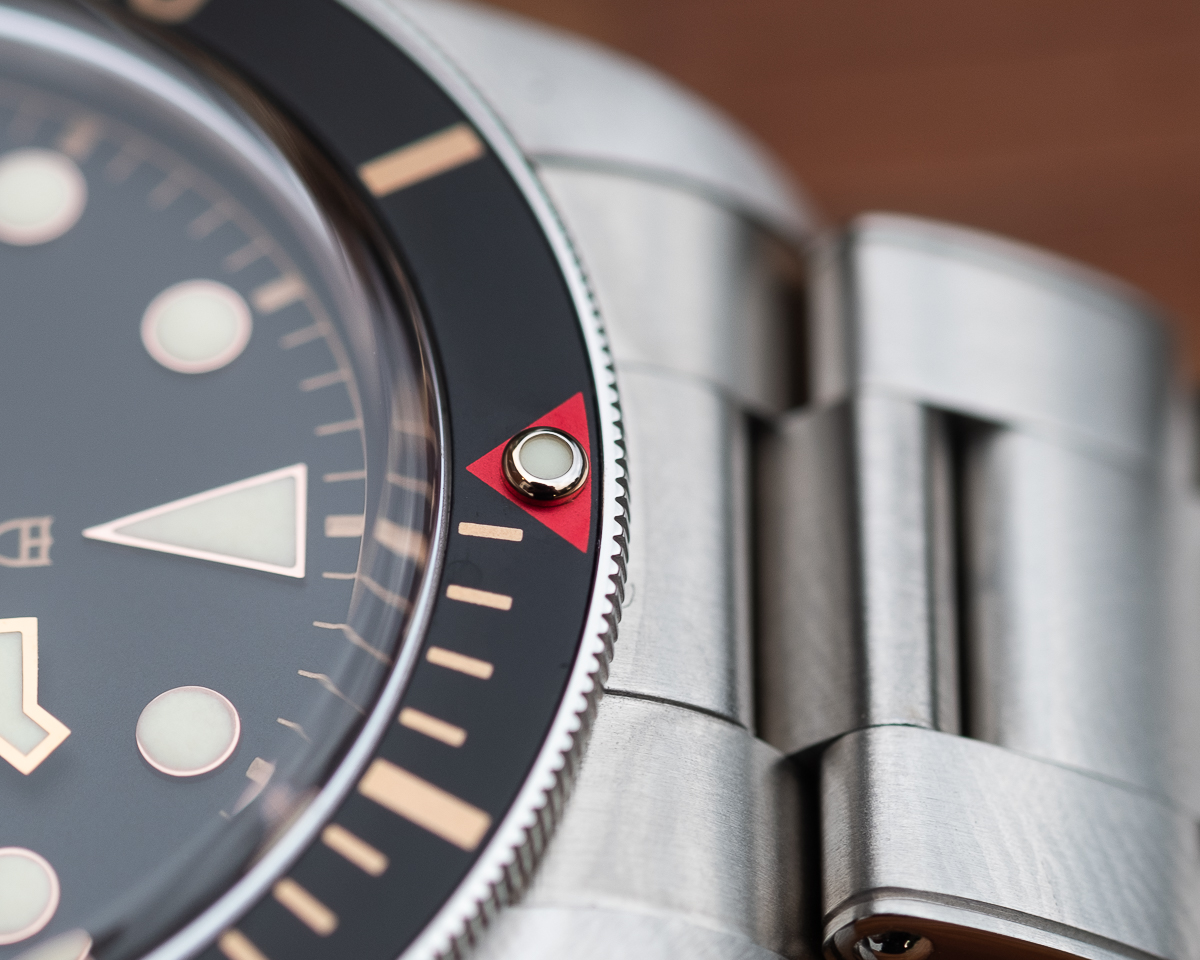 As I mentioned above, the bezel is a nice example of a coined edge with an aluminum insert. The bezel has gold lettering suspended in a black field to complement the gilt dial. One of my favorite features is the pip at noon; it’s a raised and lumed dot outlined by a red triangle. This is one of the first key cues that gives the watch a heavy vintage leaning to my eyes, as it directly references the 7924 Submariner from Tudor’s past. Stretching delicately outward from the bezel over the matte black dial is a domed sapphire crystal. Tudor’s done a great job at preserving the heritage appeal of the boxed crystal throughout the Black Bay line and the 58 is no exception. It sticks up from the bezel just a few millimeters, just enough to catch the light on the wrist, but not enough to present a snag-hazard while walking through a door. 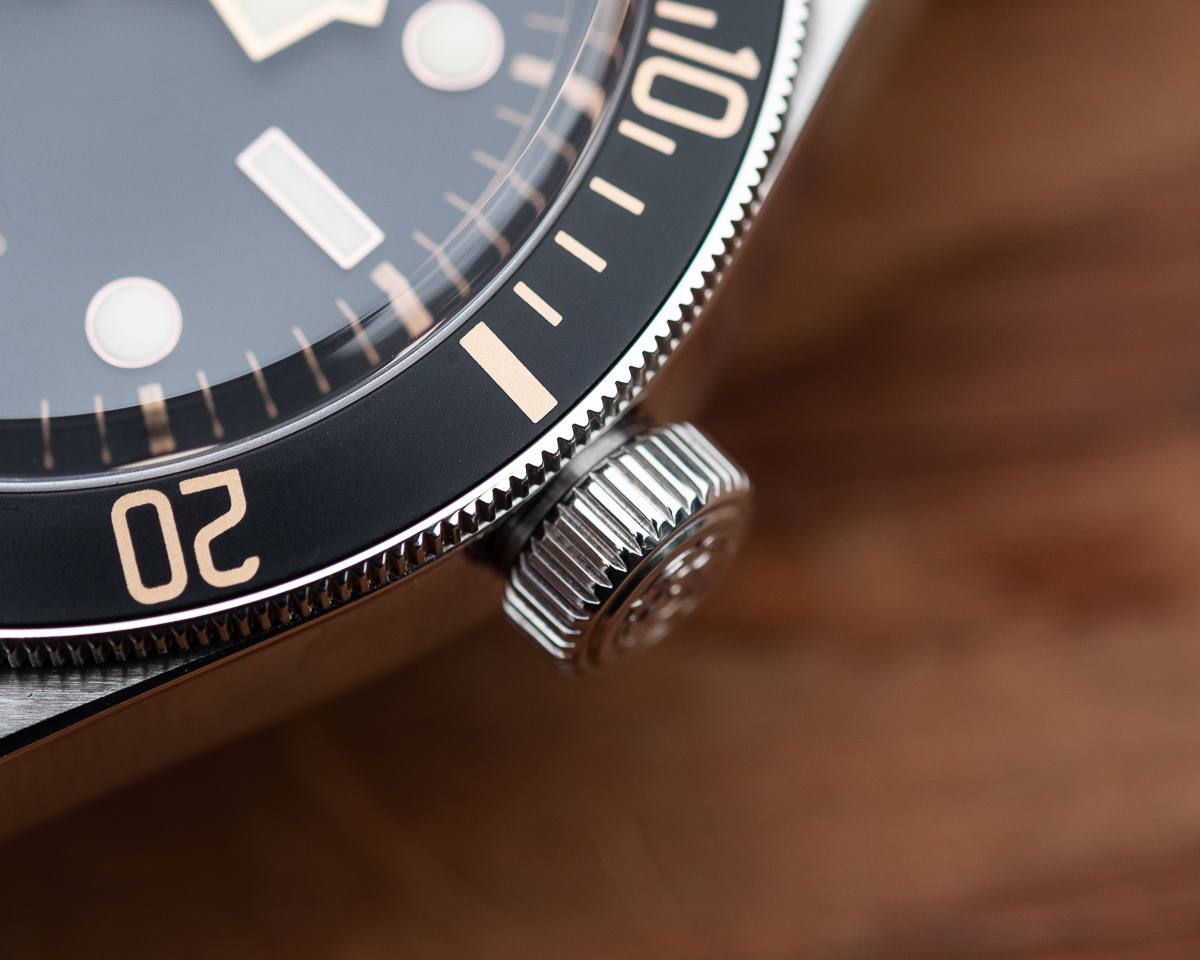 One last major improvement in my eyes comes in the form of a brushed steel crown, and the lack of or at least proportional shrinking of the anodized aluminum crown tube present on other models. I have always found that detail to be a particularly loud eyesore, and I am glad to see it corrected on the 58. Hopefully, this design is echoed in further models from the Black Bay collection. 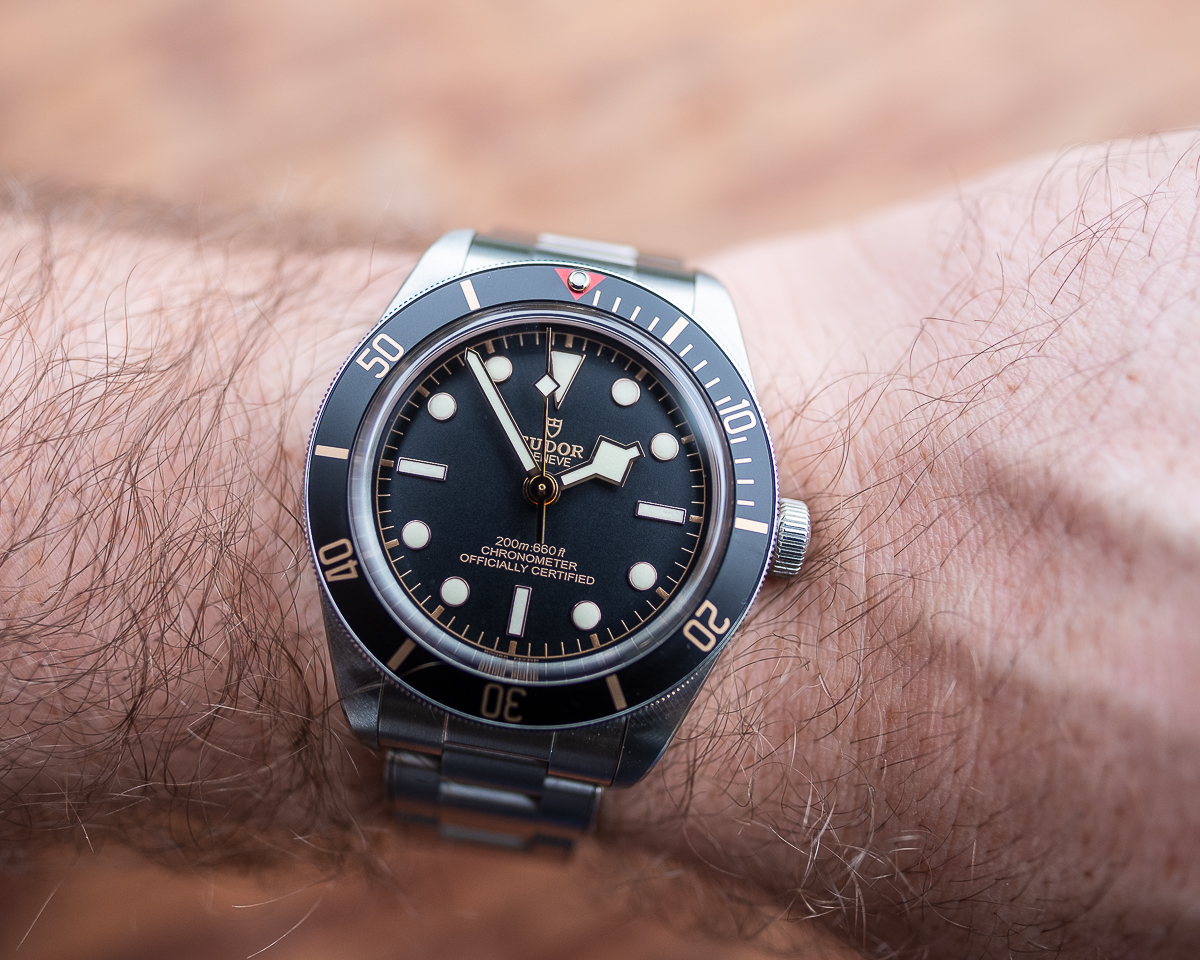 I’ve always thought that the Black Bay family of timepieces excelled at simple, yet highly functional dial layouts. Lots of close relationships can be drawn both from Tudor’s past as well as modern Rolex watches. Tudor used gilt-applied circular hour markers with the exception of the twelve, where they used a traditional triangle marker and the 3/6/9, where there are applied bar markers. One thing that they’ve always done well is applying a delicate polish to the markers themselves, giving the dial a luster that makes it a joy to look at. 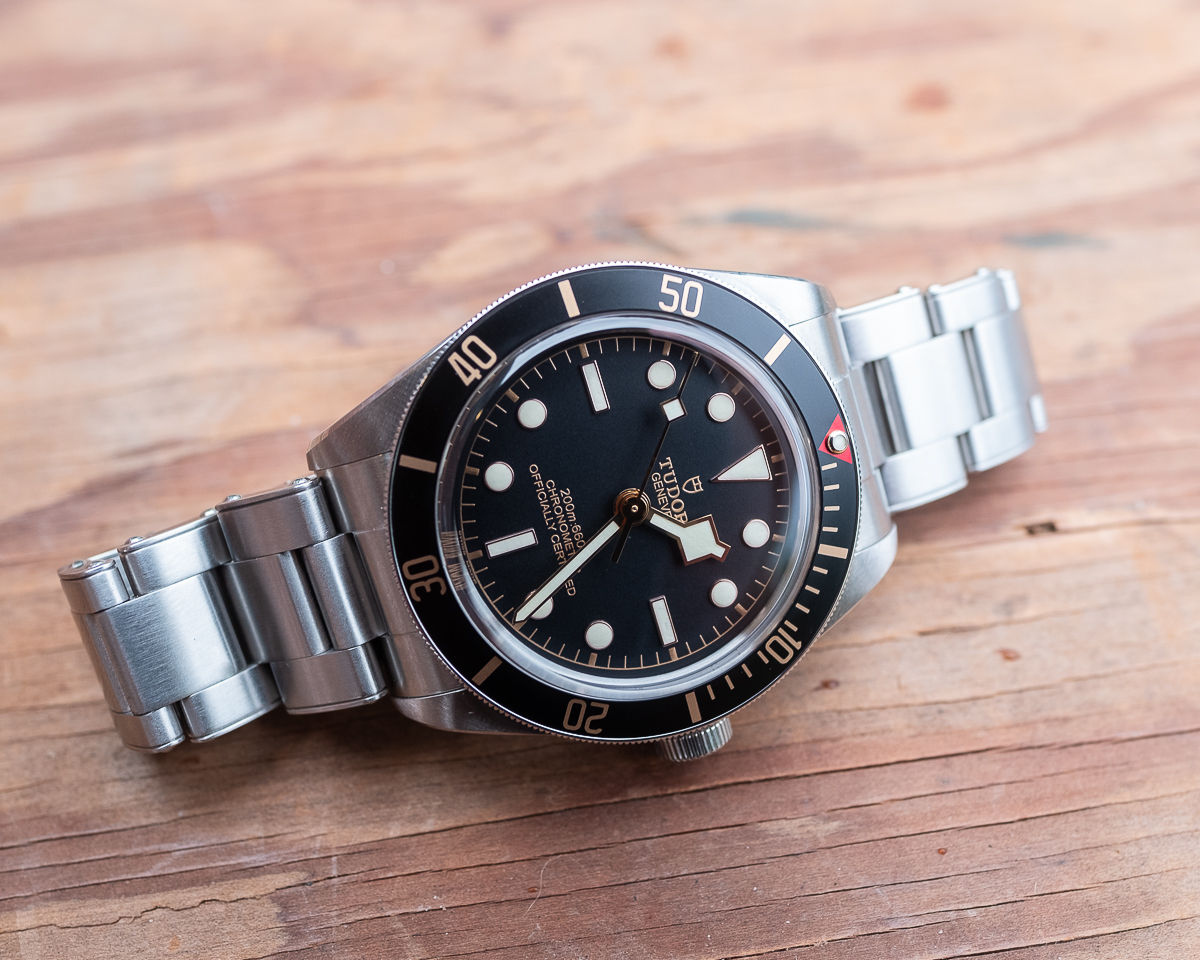 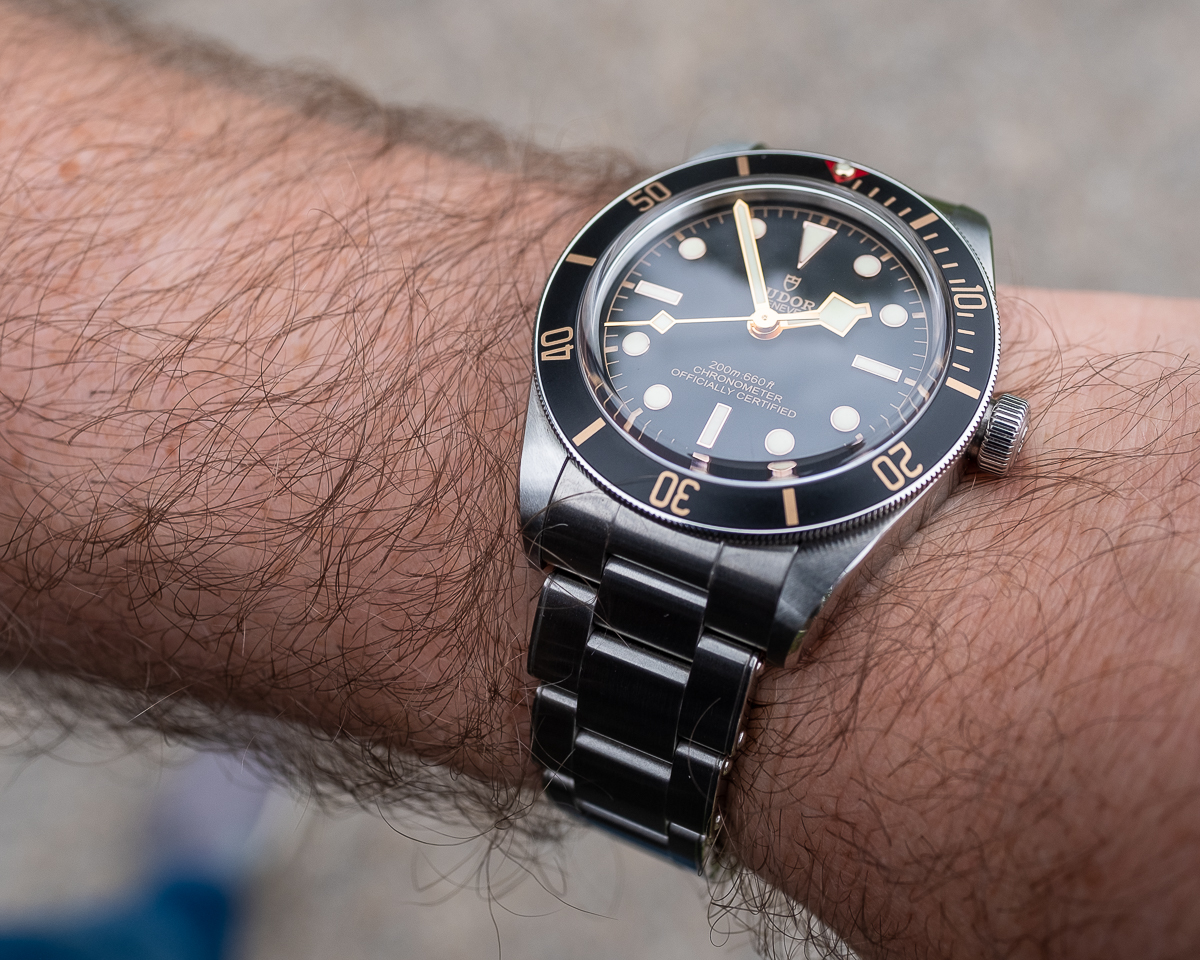 The handset stayed true to the rest of the Black Bay line being sword and snowflake styled. They are generously lumed and exceedingly visible, contrasting against the matte black dial. This simple setup redacting a date and any other distracting elements lends itself to the tool-ish intentions of the watch – while the gold accents remind you that this is still a watch you can take to dinner. 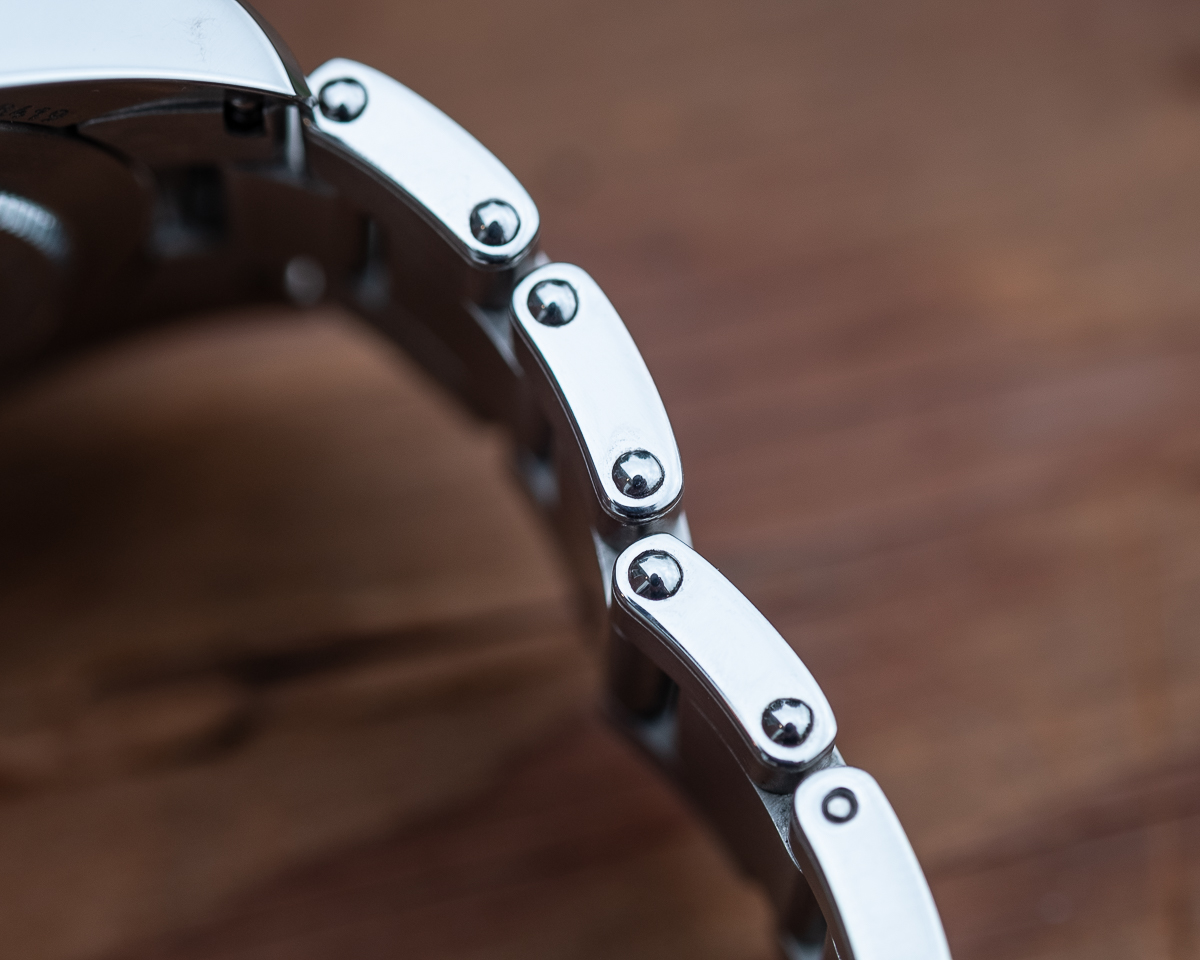 The main theme of this review has been, essentially, that this version of the Black Bay is smaller, and I like that fact – this theme is carried onto the bracelet. The excellent Tudor faux-riveted style bracelet is sized down from its original 22mm to a svelte 20mm that tapers to an 18mm clasp. I’ve always thought that a dramatically tapering bracelet adds an element on the wrist that I can really appreciate. 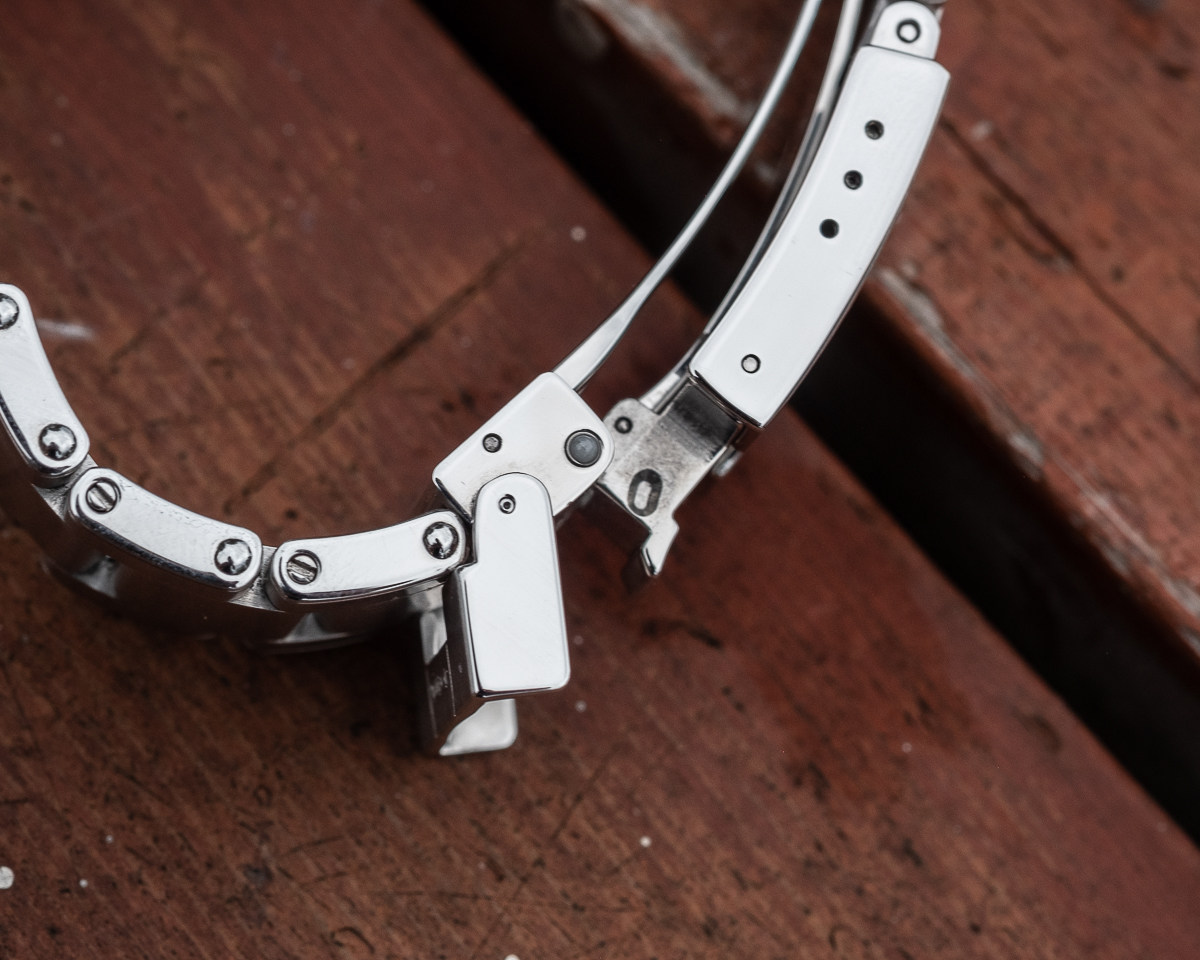 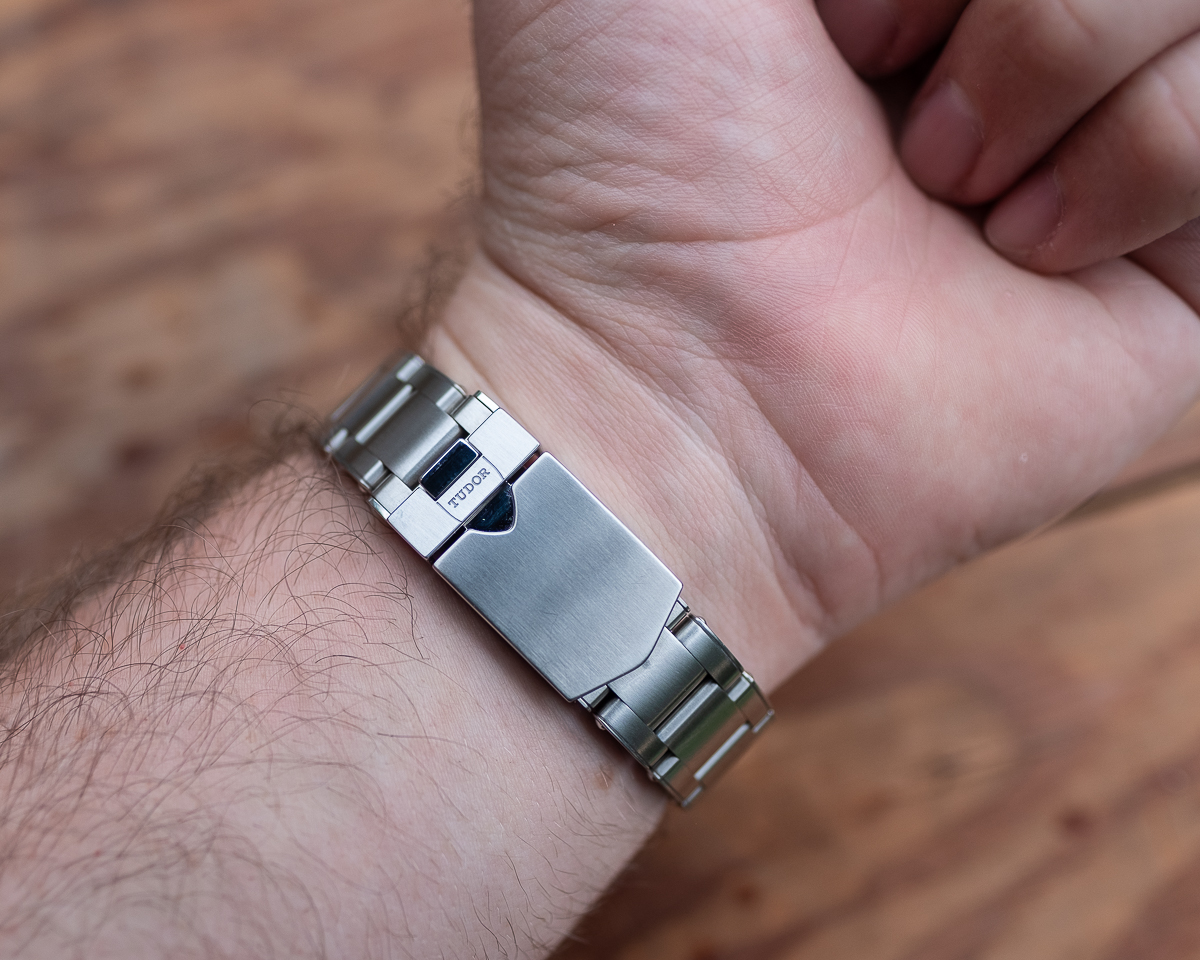 The proportions just work out here, and the watch wears beautifully as a result. There’s not a lot to be said on Tudor’s bracelets apart from that they are made extremely well. The clasp is a fold-over locking style that’s held in place by a ball detent system. If there was one negative to bring up, it would be that with the development Tudor has put into the adjustable Pelagos clasp; as well as Rolex’s R&D into the Glidelock, a tool-less adjusting clasp would be very welcome here. 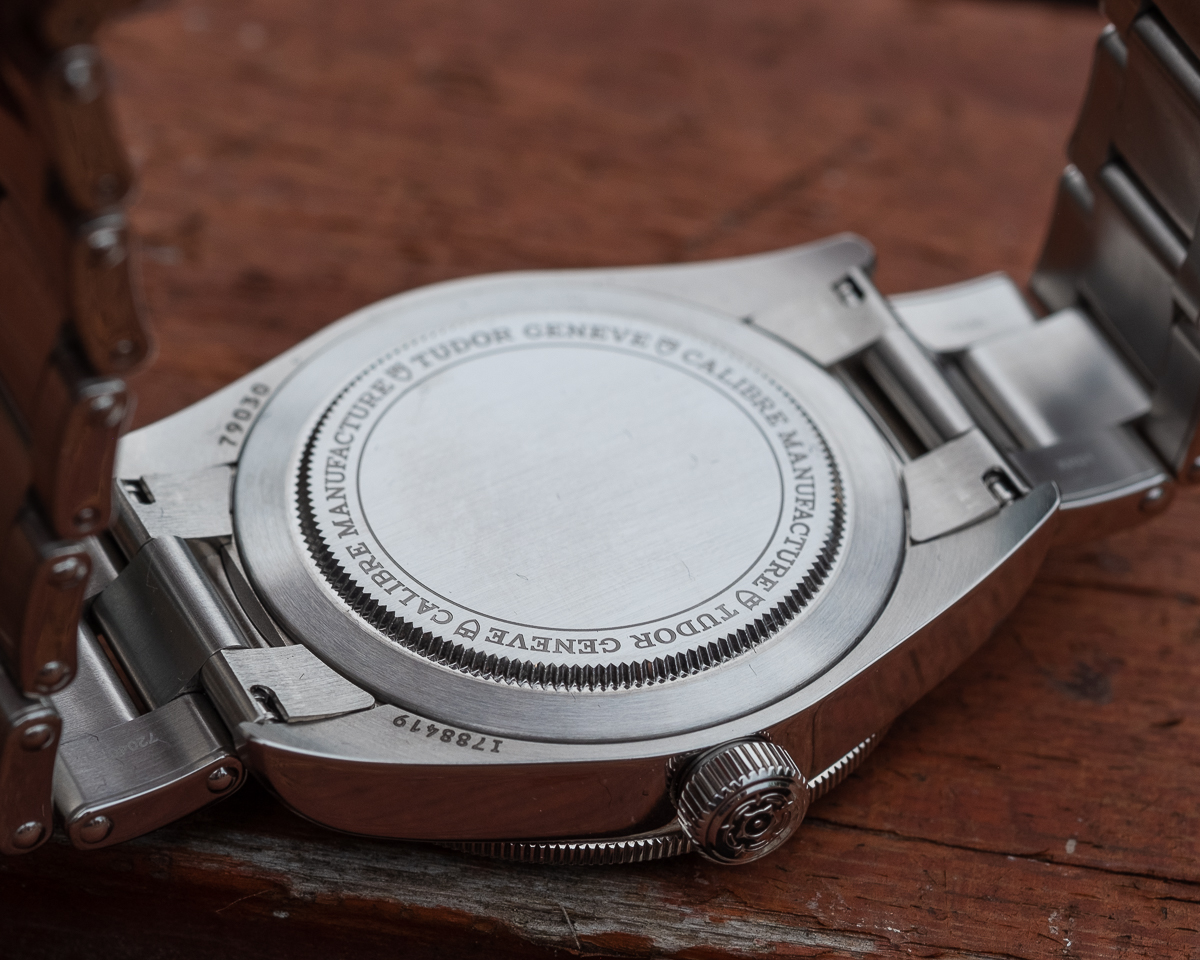 At least between my circle of watch-buddies, I feel like the narrative that developed around the release of Tudor’s in-house movements is that ETA = thin while in-house = thick. Well, with the release of the MT5402 this problem has been solved. The Tudor Black Bay 58 clocks in at just under 12mm thick, and this is largely due to their new COSC certified movement. This isn’t simply a retooling of the previous MT5602, but a whole new smaller movement with a 70-hour power reserve, non-magnetic balance spring, and a free-sprung balance wheel. My experiences with the movement have been nothing but stellar, keeping great time, and if you take it off Friday evening, it’ll still be running for you Monday morning when you head back into work. 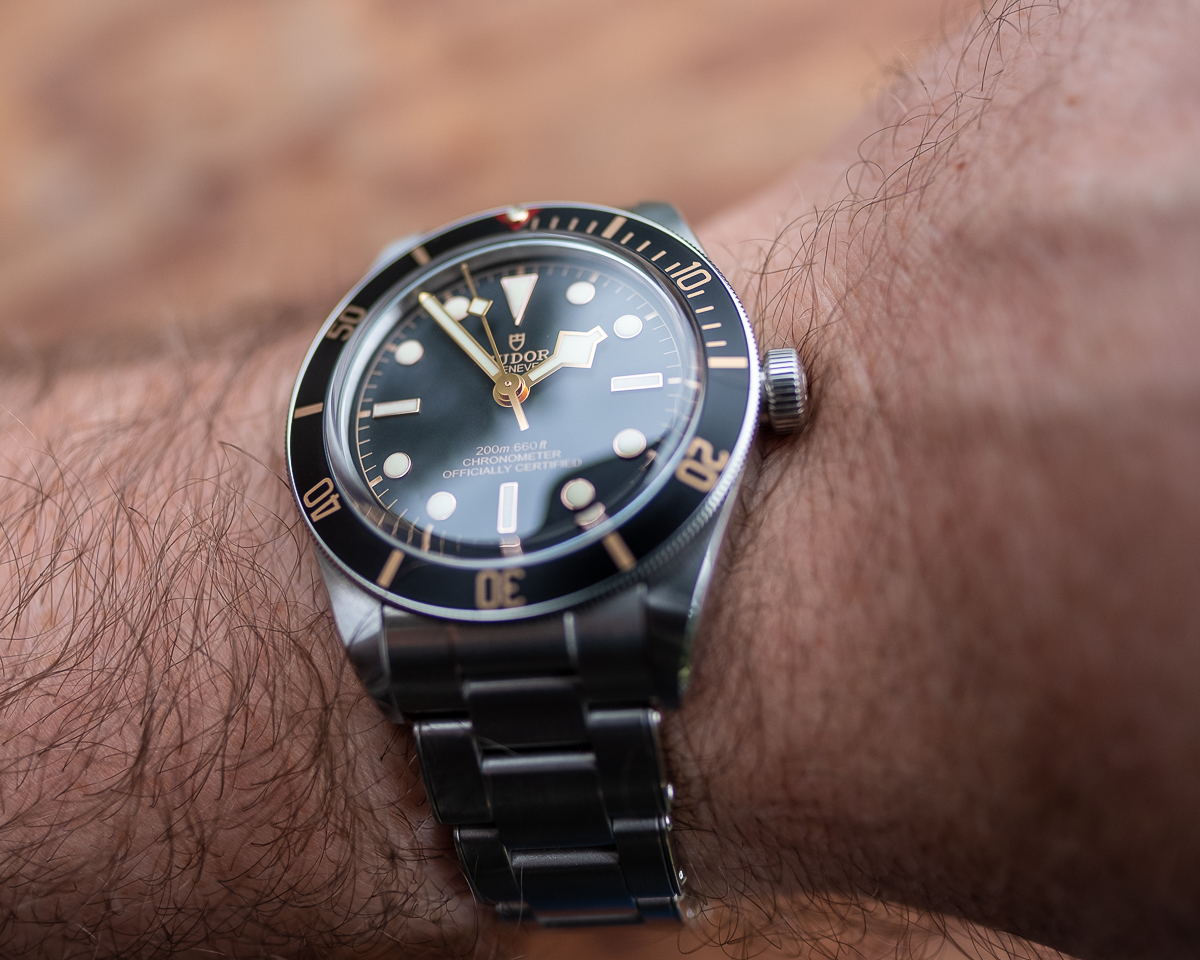 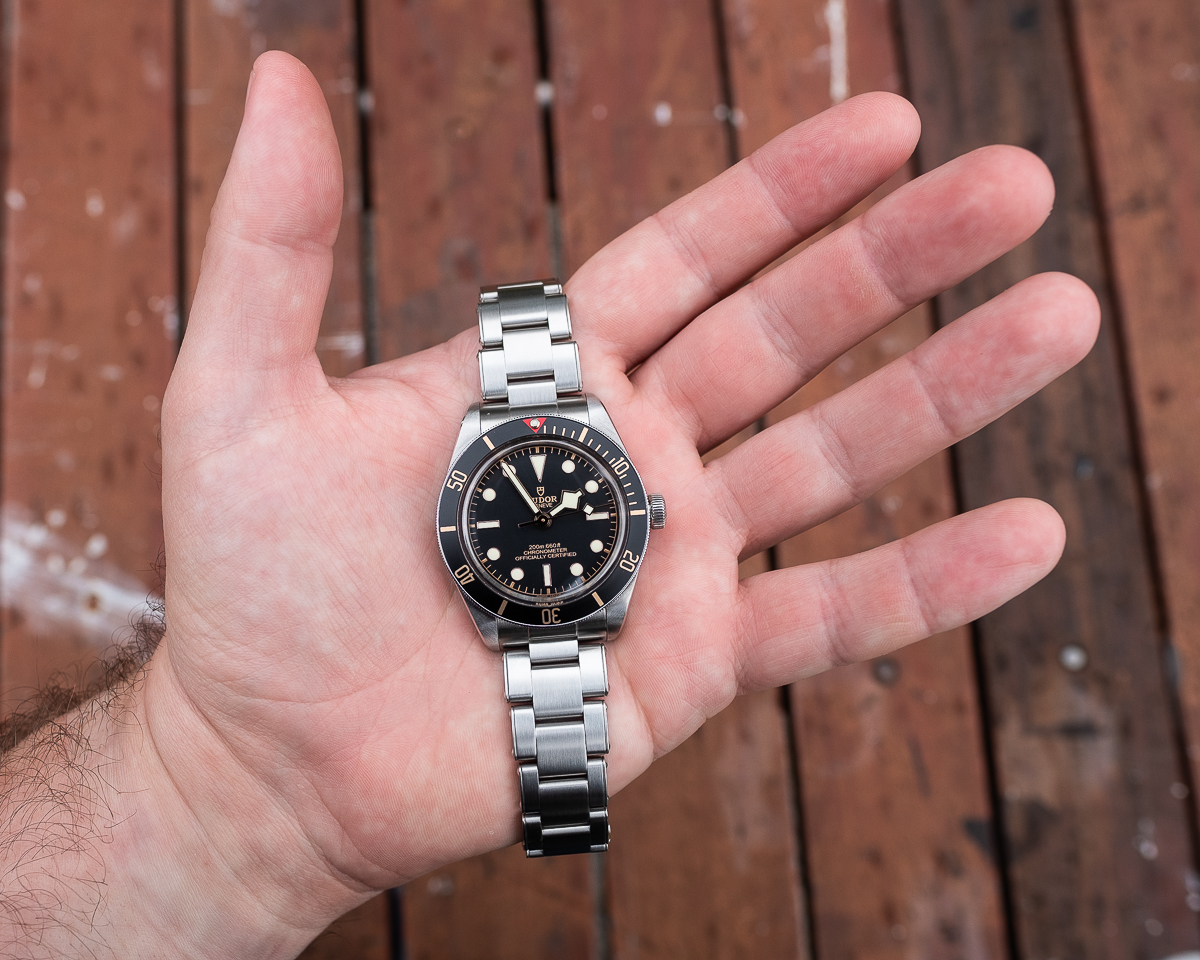 When it’s all said and done, I think the Black Bay 58 is a good direction for Tudor to be moving in. With the callback to the Tudor 7924, the brand has done an excellent job of honoring the heritage that the whole Black Bay line was based on. What my hope for the line is, that Tudor expands the 58 size into other color schemes and configurations. Personally, I don’t love gilt watches for my wrist, so seeing a Black Bay 58 Blue or Red with the white text and silver accents would be very appreciated. All in all, I think the Black Bay has always been a great entry point for the burgeoning collector to make the jump into higher-end pieces. The addition of the 58 just gives them a little more variety when doing so. The Tudor Black Bay 58 is available for $3,575. tudorwatch.com

Necessary Data
Brand: Tudor
Model: Black Bay 58
Price: $3,575
Size: 39mm in diameter
Would reviewer personally wear it: Yes, I found the size perfect for me.
Friend we’d recommend it to first: Someone looking to break that $3k barrier into luxury watches.
Best characteristic of watch: The thinness of the new case.
Worst characteristic of watch: I do not enjoy gilt dials and I would love to see some new colorways in this size.