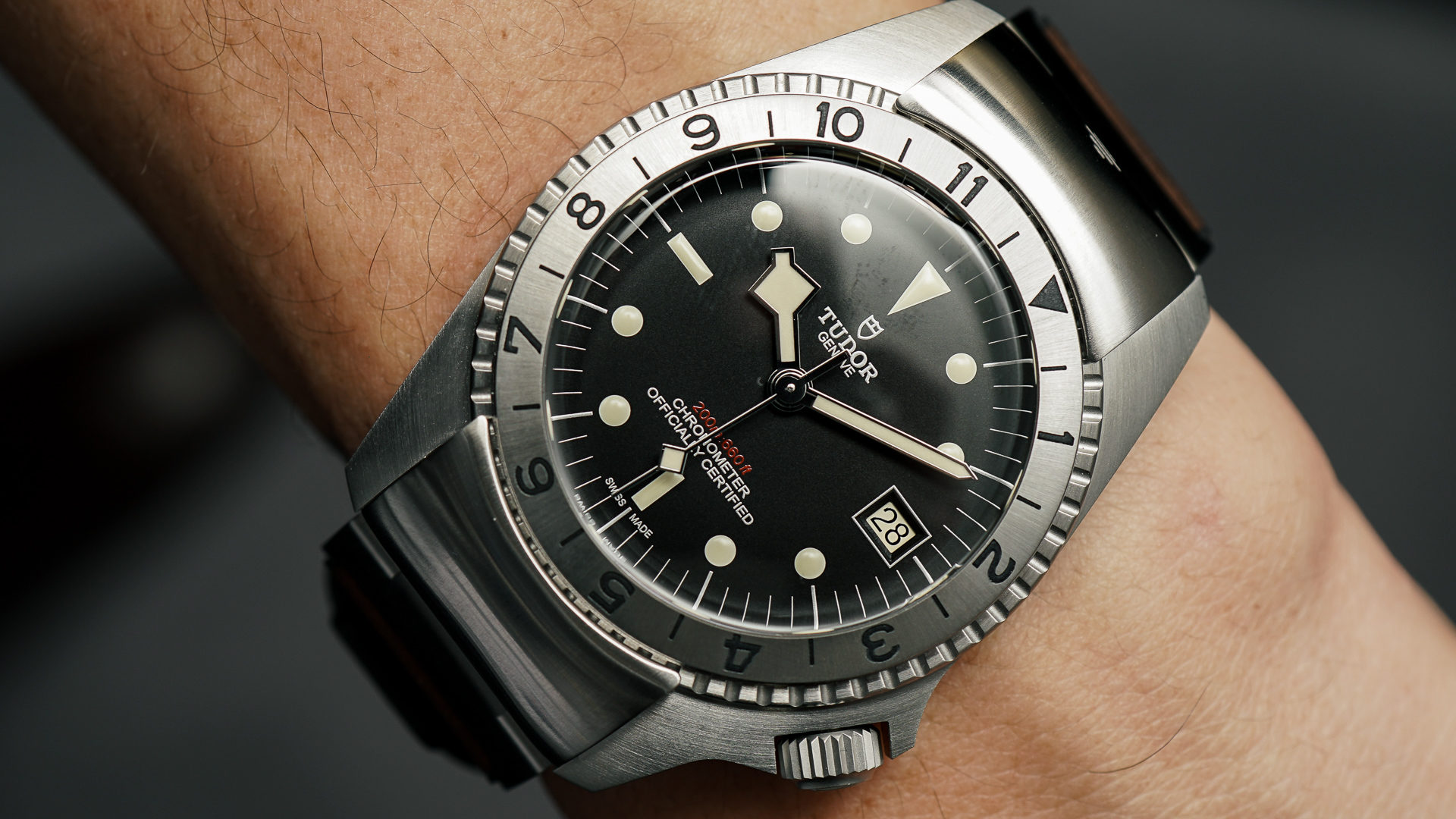 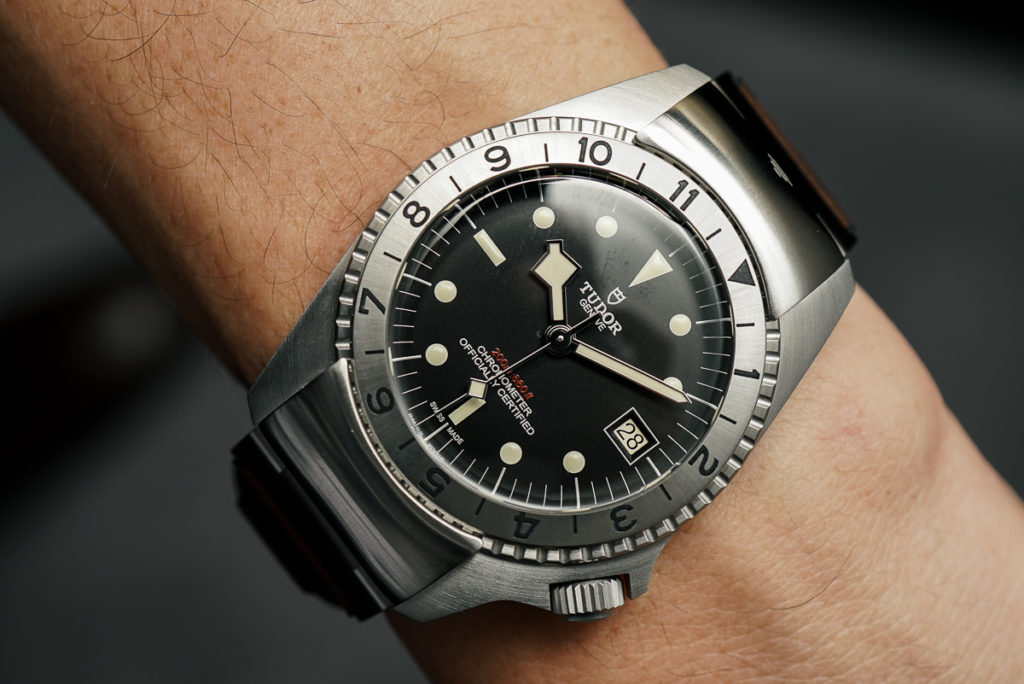 Just like shower beers, bund straps, and the Omega Ploprof, the Tudor Black Bay P01 takes a little getting used to. Ok, maybe a lot for some of you, but that’s fine. Unlike last year’s Black Bay 58 or GMT watches, I get the sense that the P01 was never meant to be a product with broad commercial appeal – it’s a set piece designed to get us talking about Tudor’s long history making dive watches for the world’s navies. I’d also hazard a guess that Tudor vastly overestimated the community’s desire for a quirkier Black Bay variant – a bit of marketing hubris that ultimately yielded one of the more ‘controversial’ watches of the show. From a design standpoint though, this is somewhat undeserved, as the P01 isn’t too much of a departure from Tudor’s long history of creating well-built tool watches with design or utility properties that are slightly left of center. The P01’s problem isn’t that it’s strange looking (as watch fans have proven time and again to love historical oddities), its problem is simply that it’s not a Submariner re-issue. 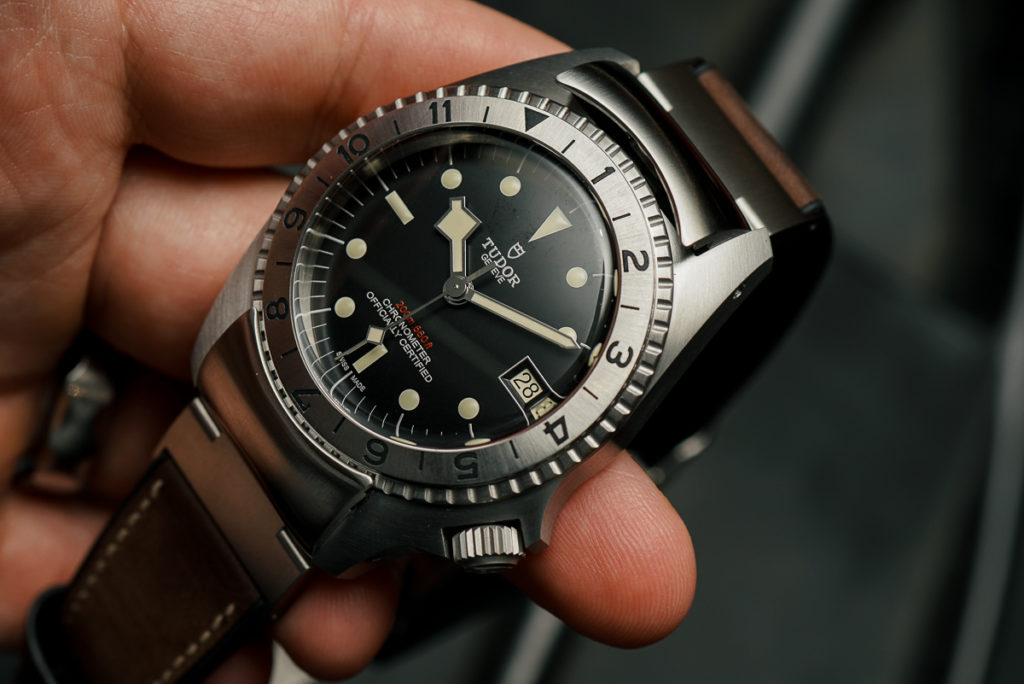 After introducing a new movement and launching two of the hottest watches of Baselworld 2018 with the Black Bay 58 and GMT (respectively), then opening 2019 with a very conspicuous teaser photo, many were convinced that the Snowflake Submariner re-issue was all but a sure thing this year. And then all of the sudden, it wasn’t. An untimely leak the night before the show lit up Instagram, which led to a general air of disappointment outside the Tudor booth come exhibition morning. It’s a damned shame, really – not because the new Black Bay P01 was a watch that everyone was supposed to like – on the contrary, it most certainly wasn’t (and judging from comment threads literally everywhere, it definitely isn’t). It’s a shame that Tudor set the wrong expectation with this release back in January, and what was actually released – to many, was tantamount to a bait-and-switch. Hence, the pile-on. There’s always next year though, right? Great – onward. 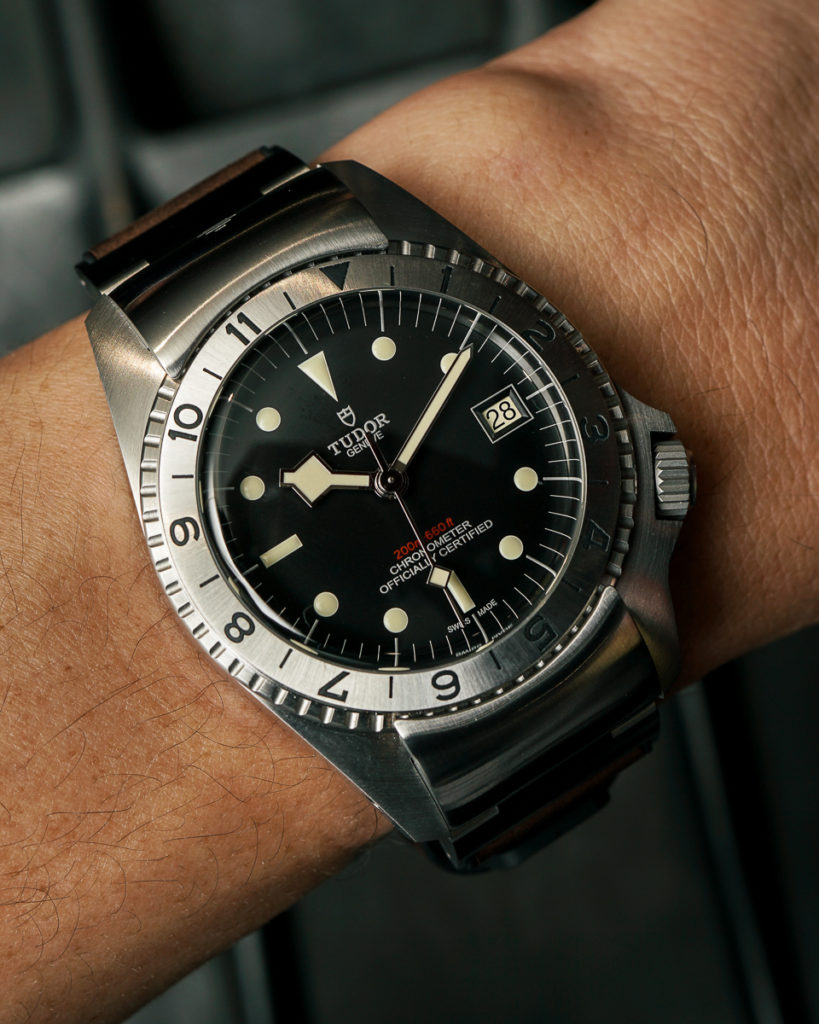 So once on the wrist, I was happy to find that contrary to many of the comments on social media, the P01 was neither “disgusting” nor “a total failure.” Hell, it’s not even a “turd.” (We’ve got @bbk357 to thank for that particularly insightful nugget of industry analysis.) Sure, it has an unbalanced crown guard at 4:00 , an over-designed bezel locking system (pushing the arrow on the hinged endpiece at 12:00 unlocks the bezel, enabling it to be turned in either direction) and a pair of goofy fixed endpieces that give the whole thing a somewhat awkward oblong appearance from top-down angles, it’s got all the weird character one would expect to emerge from the most experimental period of tool watch development of the last century, and a build quality that lives in the distant dreams of any watch-modder who’s also tried to shoehorn the Benrus Type 1 aesthetic onto an SKX007. 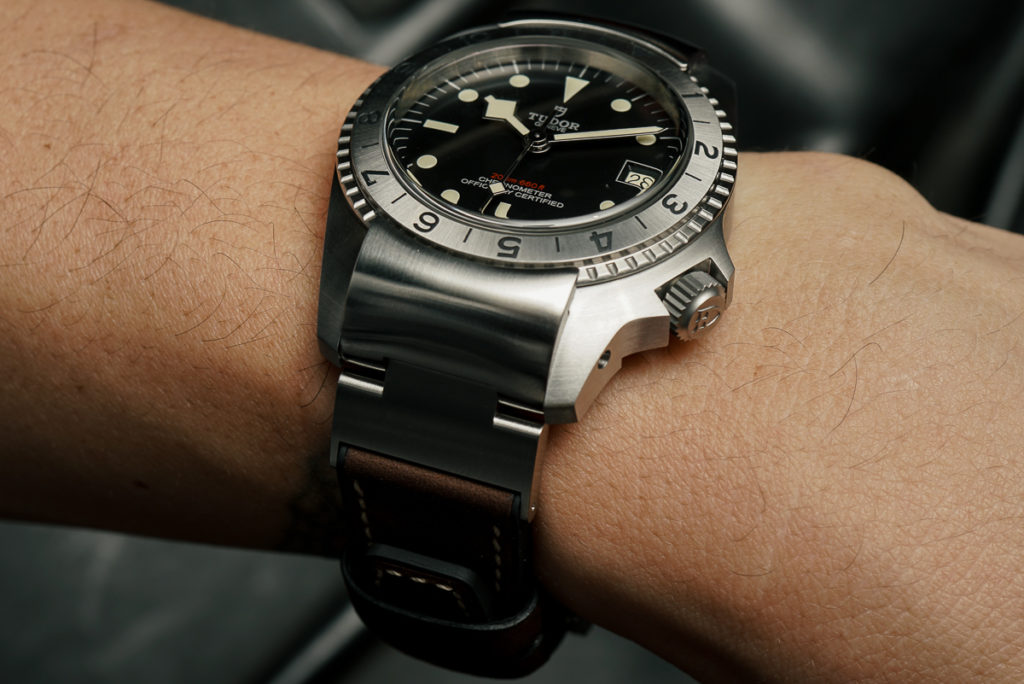 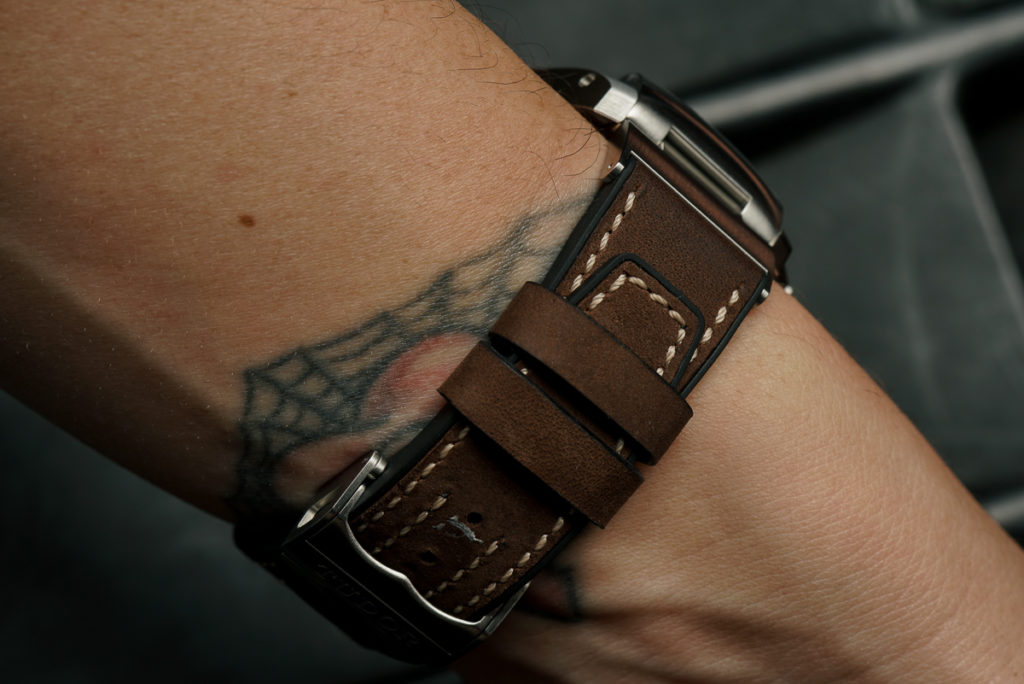 Another oddly polarizing choice is the leather strap, but I was surprised to find that it’s actually a buttery-soft leather stitched into an equally pliable rubber backing. Coupled with a generous taper at the clasp and the case’s downward hinged lug pieces, the whole thing is strikingly comfortable on the wrist, and I’d love to see this strap option available throughout the rest of the line. Unlike the regular Black Bay though, the P01 likely can’t be worn on a NATO, as a traditional strap would be attached via the springbars at the terminus of each hinged endpiece, which appear to be fixed via some type of proprietary tool. Putting this on a Tudor-branded Tropic strap as shown in the original prototype photos would have been a welcome edit, seeing as it’ll certainly take a little work with the right length of aftermarket two-piece rubber or nylon strap to be able to log proper pool or ocean time with this 200 meter dive watch. That said, I could still see the P01 functioning as a pretty great travel watch, thanks to the 12-hour bezel, which can be used for timing long flights, or referencing another time zone without actually having to adjust the local time. 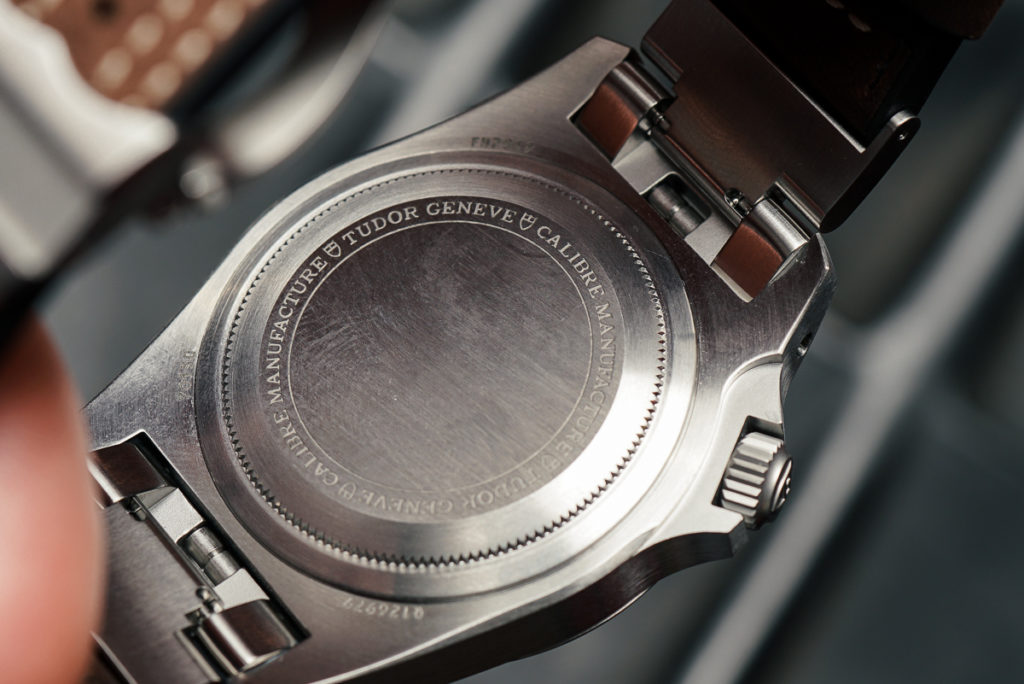 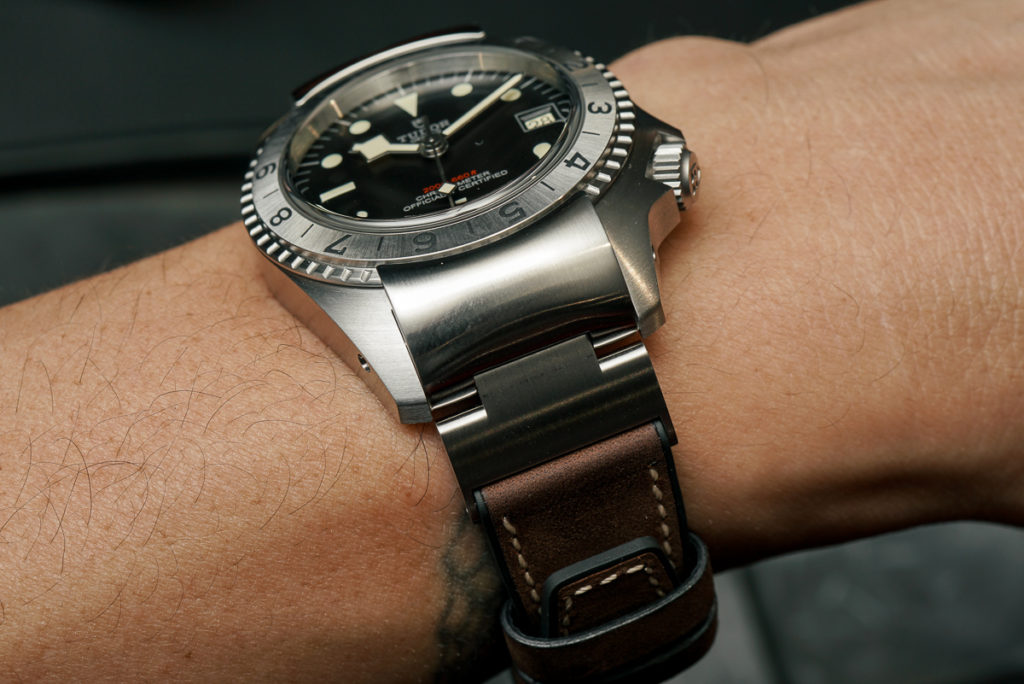 Tudor says the P01 is based on a “legendary” 1960s prototype from the brand’s ‘commando’ program, which I honestly have to debate, at least in part. How many vintage watch experts – even those who occupy a privileged space deep in the rabbit hole were aware of this reference? Calling a virtually unknown one-off experiment that was rejected by the military ‘legendary’ isn’t just a little silly, it smacks of the same marketing genius that thought teasing this thing back in January was a good idea. But unlike Rolex, and unlike the vast majority of the brands we’ve seen at Baselworld this year, Tudor is trying new things. Had we been given the vastly safer and more desirable Snowflake re-issue, the community would probably find other ways to complain about Tudor getting too complacent or predictable (we can’t all be Rolex, mirite?). Let’s not forget how the equally quirky Black Bay Chronograph was also universally crucified two years ago when it was announced, but has quietly been re-welcomed back into the fold. Doesn’t hurt that an on-trend palette swap was all it took to land it on the show’s best-of lists, but that’s another story entirely. 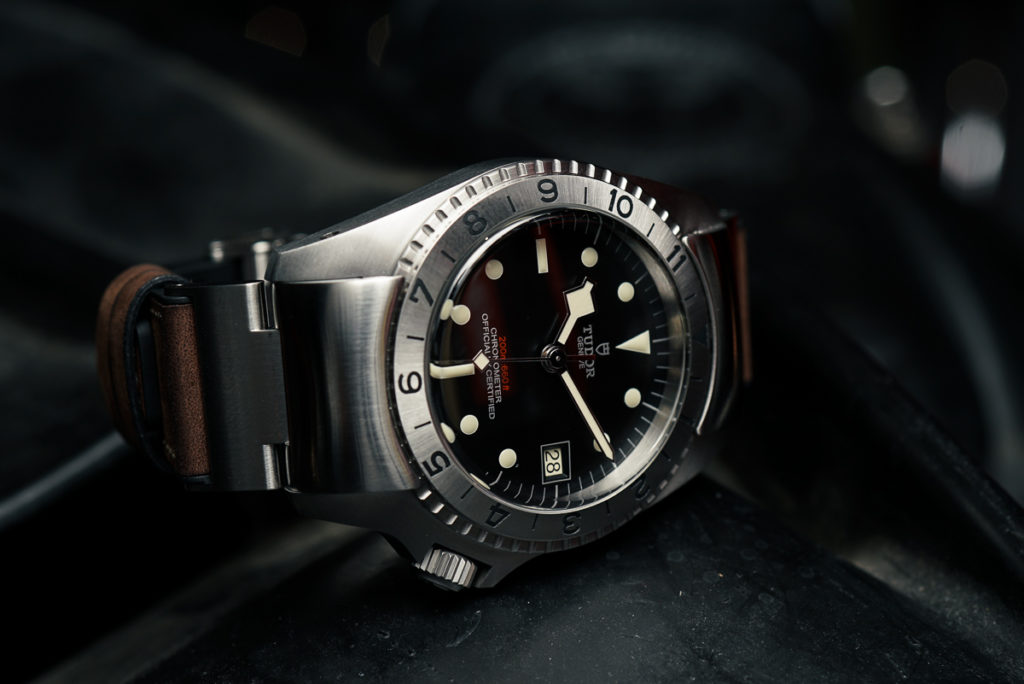 The rest of the specifics around the Black Bay P01 are relatively benign and otherwise well-documented. The whole thing is a 42mm stainless steel case that wears comparably in height and width to the standard Black Bay, though it carries a visually longer profile across the wrist due to the smooth shape of the integrated end pieces. Inside, the P01 is powered by Tudor’s in-house manufactured MT5612 calibre, which we’ve seen in the manufacture Black Bay and Pelagos. The Black Bay P01 (ref. M70150-0001) is priced at $3,950, and should be landing in Tudor retailers later this summer. tudorwatch.com