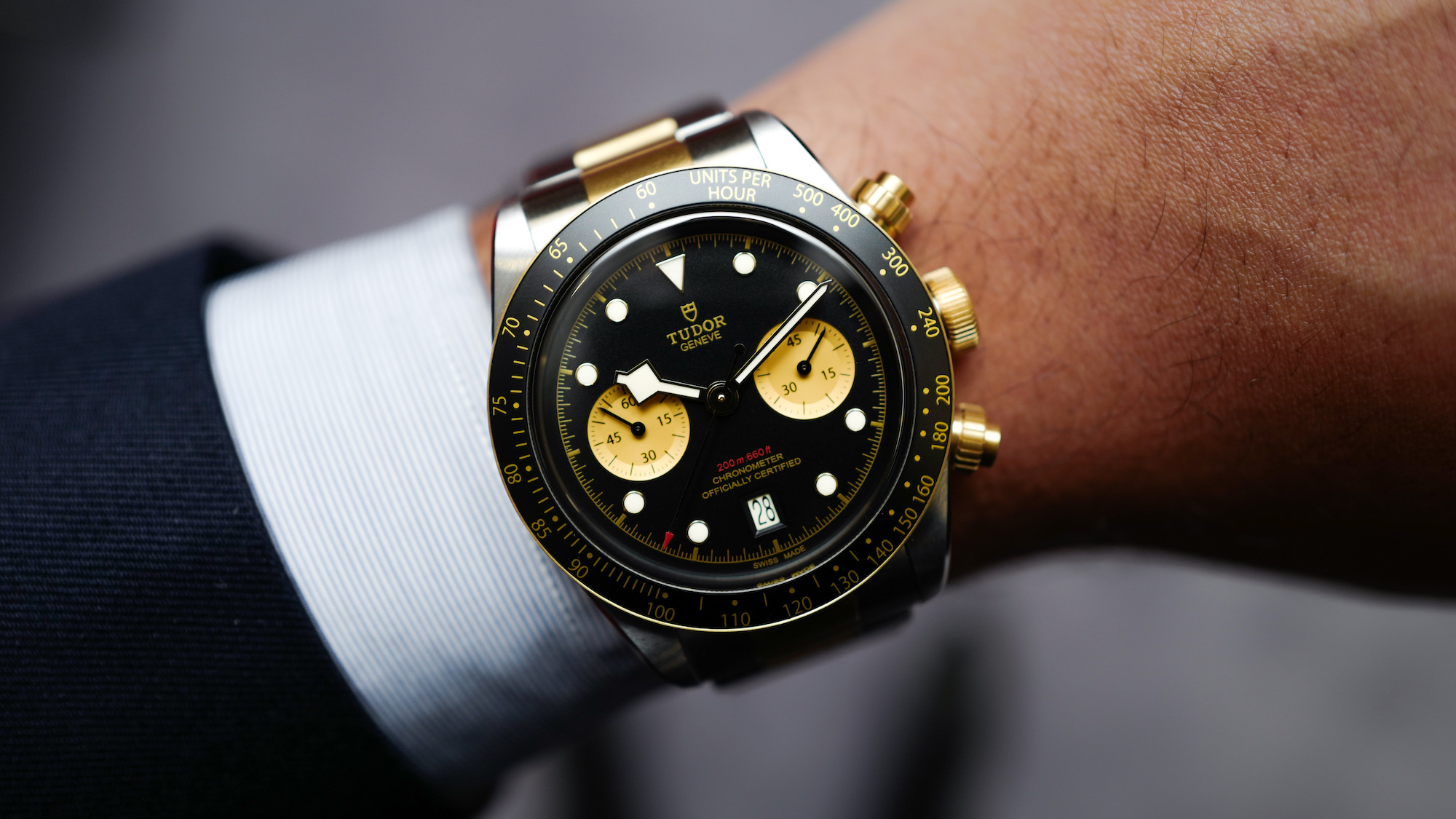 If you were paying the least bit of attention on Instagram in the weeks leading up to Baselworld 2019, it was nearly impossible to avoid the hype around theories about new releases. The possibility of a new Tudor “Snowflake” Submariner was among the buzziest theories and not one that the brand didn’t do its part in stoking. But, like a new Rolex Milgauss or Explorer II, most of these predictions didn’t come true. Tudor released what is essentially its version of an Omega Ploprof (design-wise, that is) with the Black Bay P01, but I was honestly so happy to see the release of this Black Bay Chronograph S&G (that’s steel & gold) watch. A two-tone chronograph hasn’t been the remedy to an existing steel model in recent memory (that I can think of, at least) but Tudor has pulled a reverse Daytona, and this S&G version breathes new life into 2017’s steel Black Bay Chronograph. 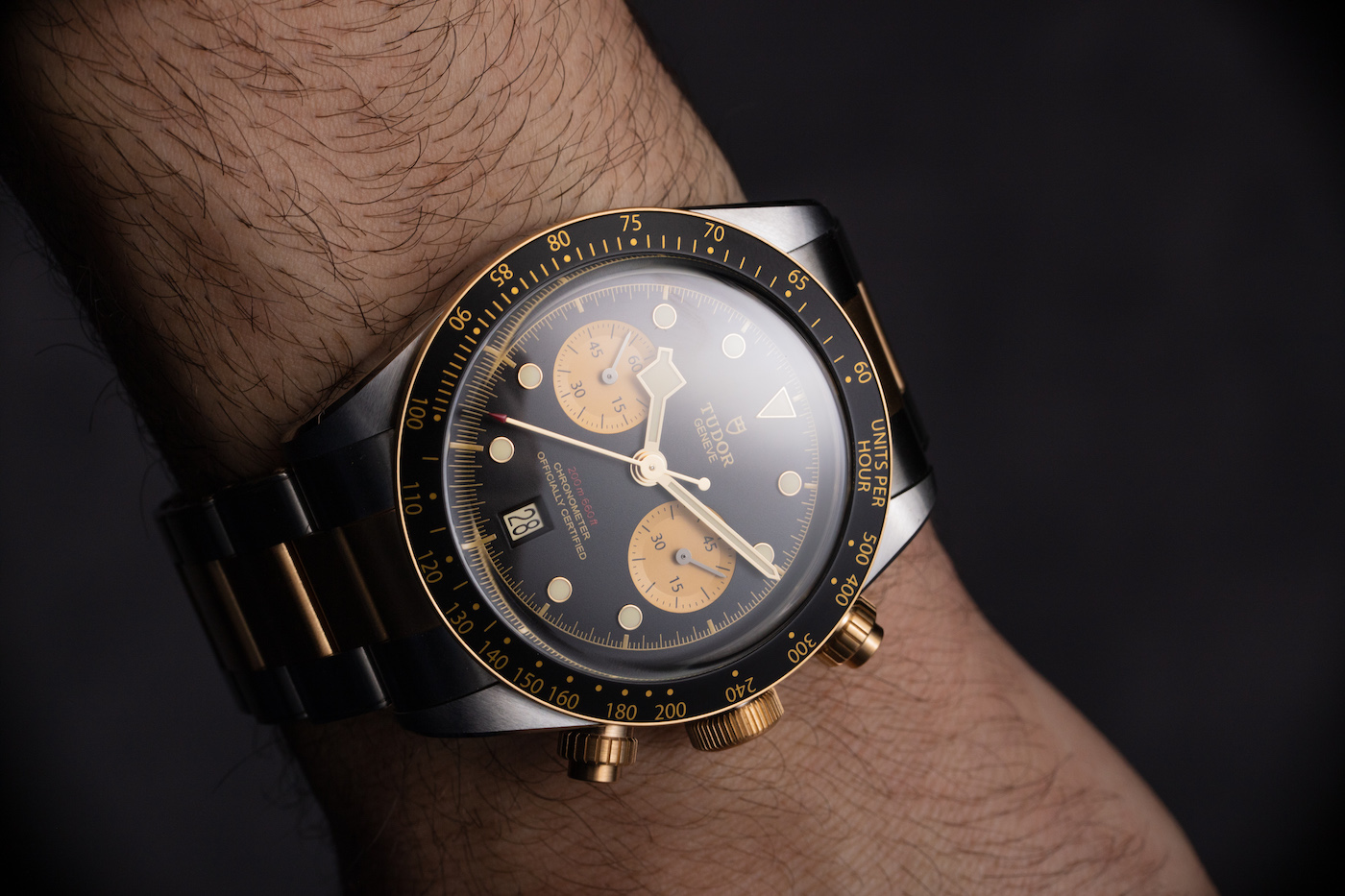 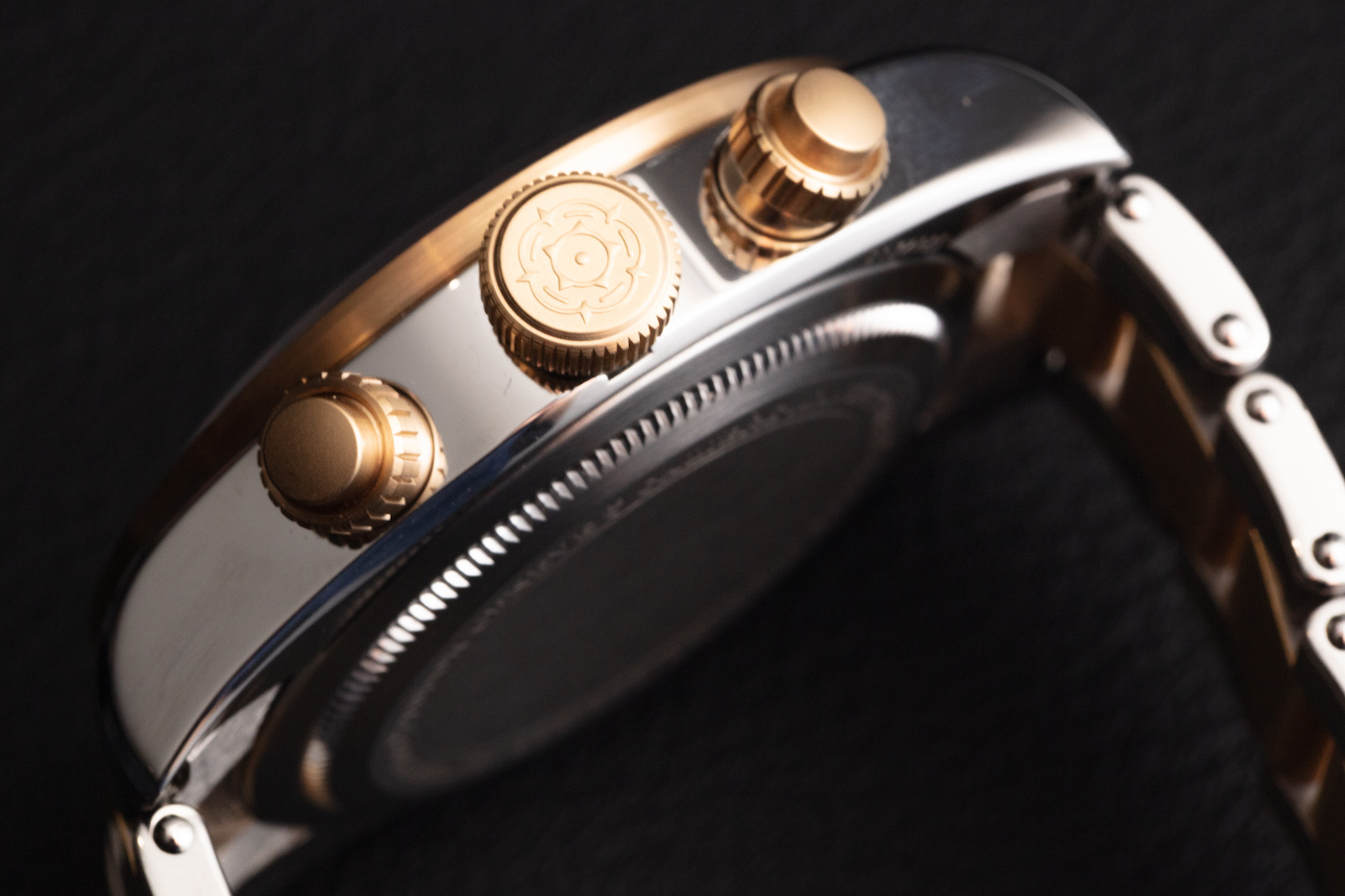 There’s an inherent bit of confusion with being a diver chronograph, and I think the mistake of the initial steel Black Bay Chronograph was that it leaned too hard in hoping it could make you forget that contradiction by having an unremarkable case. Now Tudor has gone all in with the two-tone aesthetic and has offered it on a two-tone bracelet, bund strap, leather strap, and fabric strap. It’s several different “love it or hate it” variations, which is so, so much better than being simply perplexing. 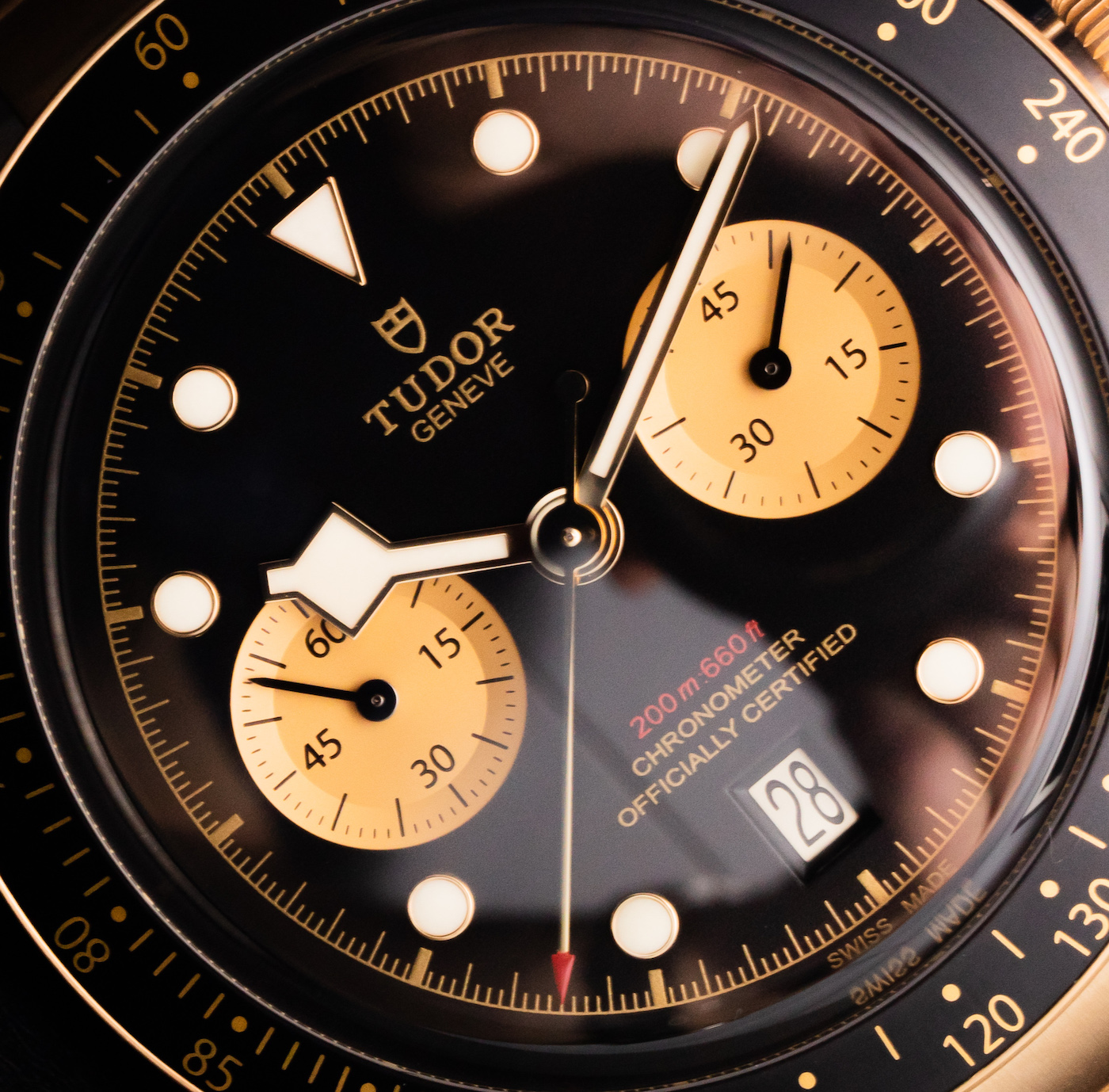 Tudor states that aesthetic inspiration here hearkens back to the Oyster-Prince Submariner ref. 7922 but it’s clear that some of the vintage Rolex Daytona models in gold are a clear point of reference, as well. The matte black dial with gold sub-dials (that still seem just a bit too small to me) benefits greatly from keeping the gold in a very mellow tone. This is echoed on the bezel, which has its outer edge done in gold, as well, which sort of acts as a frame to the aspects of the dial that are done in gold and black. The pushers and gold-capped crown pull the whole thing together to reach that Goldilocks level of “just right” breakdown of steel to gold. Like it or not, it exudes personality and a complete, cohesive design. This is in comparison to the steel model, which, to me, has always looked distinctly incomplete. 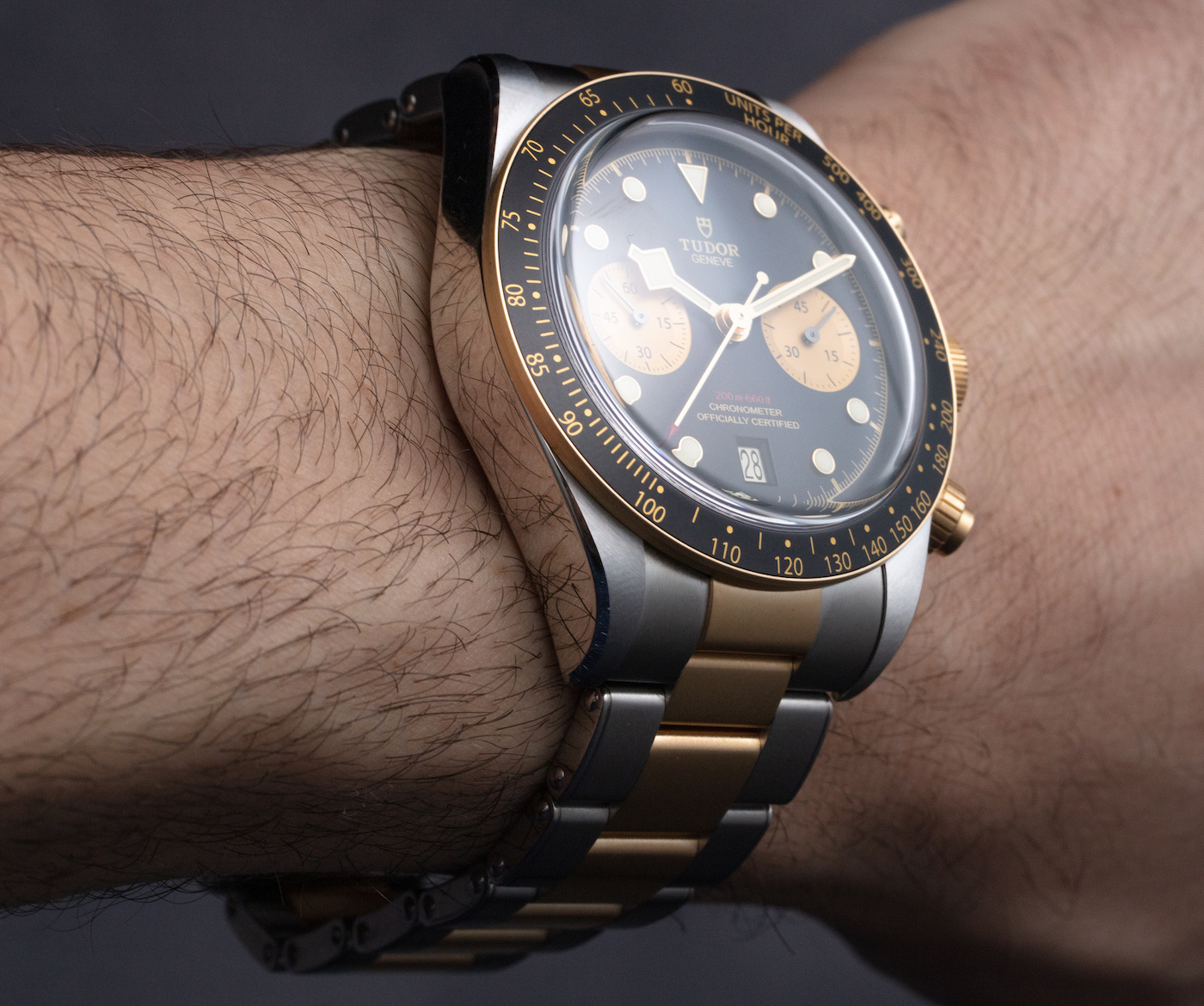 The Black Bay Chronograph S&G runs on the same MT5813 movement that debuted in the steel version two years ago. Controversy over the use of “in-house manufacture” phrasing aside, this is the movement Tudor developed with Breitling. Most important to me here is the 70-hour power reserve, though the steel caseback won’t allow you any view into it, anyway. In regard to practicality and ownership, this is a movement to applaud purely in terms of performance. 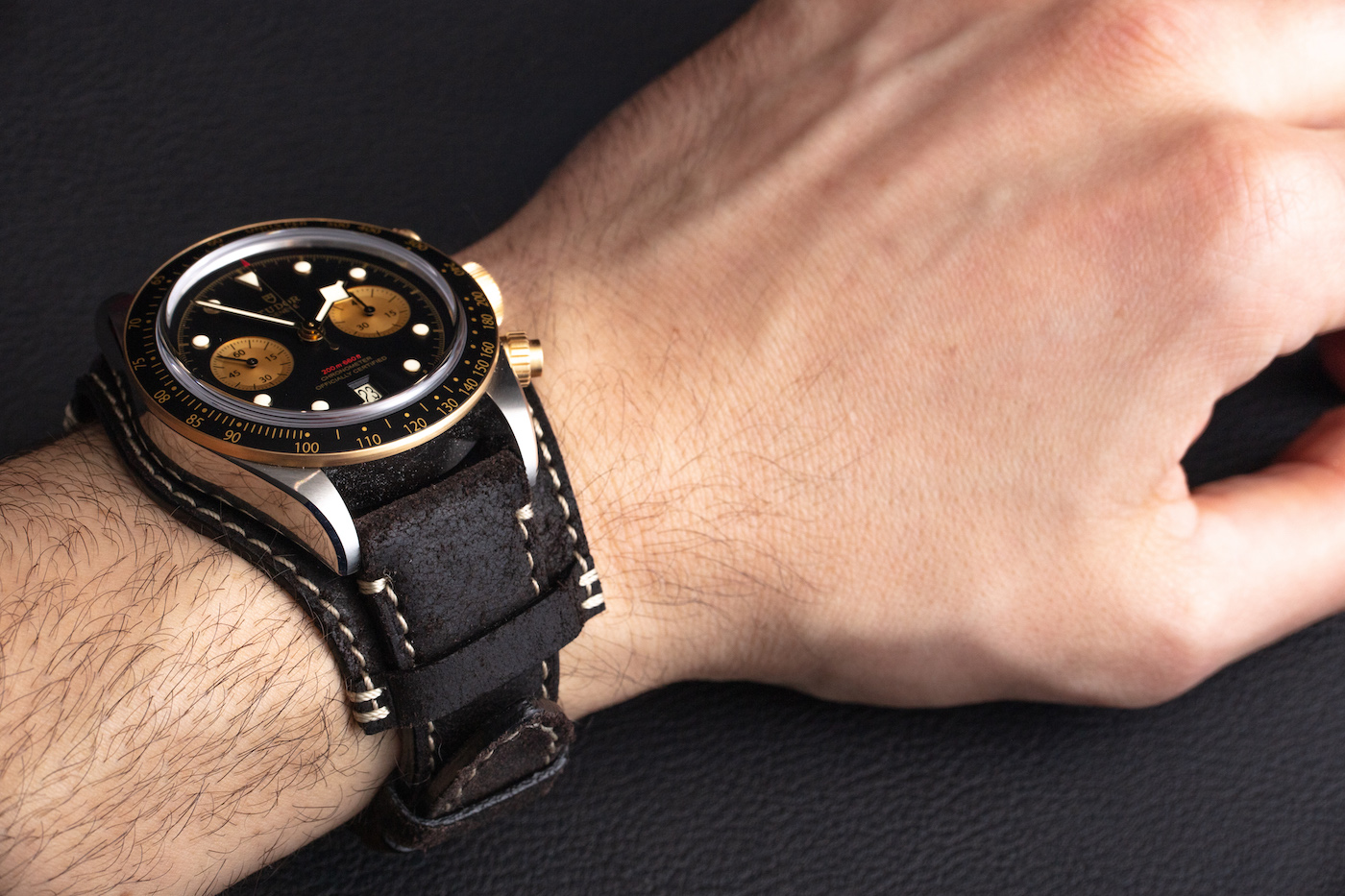 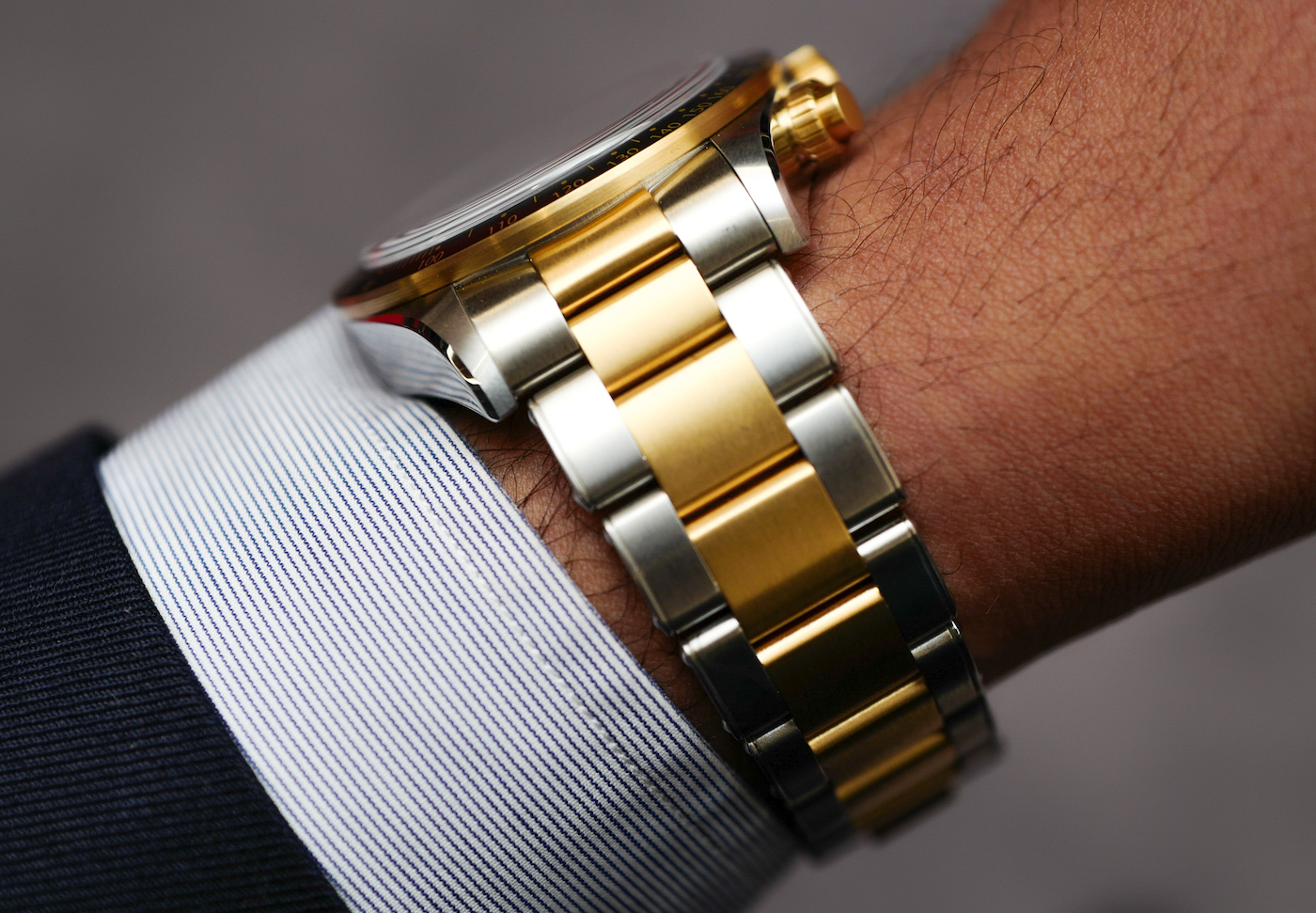 The case measures 41mm-wide and 14.9mm-thick, with a lug-to-lug width that comes in just a hair under 50mm. The case thickness isn’t bad, all things considered, but when the watch is on the bund strap or NATO strap, the thickness goes up considerably. Of course, that’s always part of the equation here but something that did noticeably change the wearing experience when compared to wearing it on the bracelet. 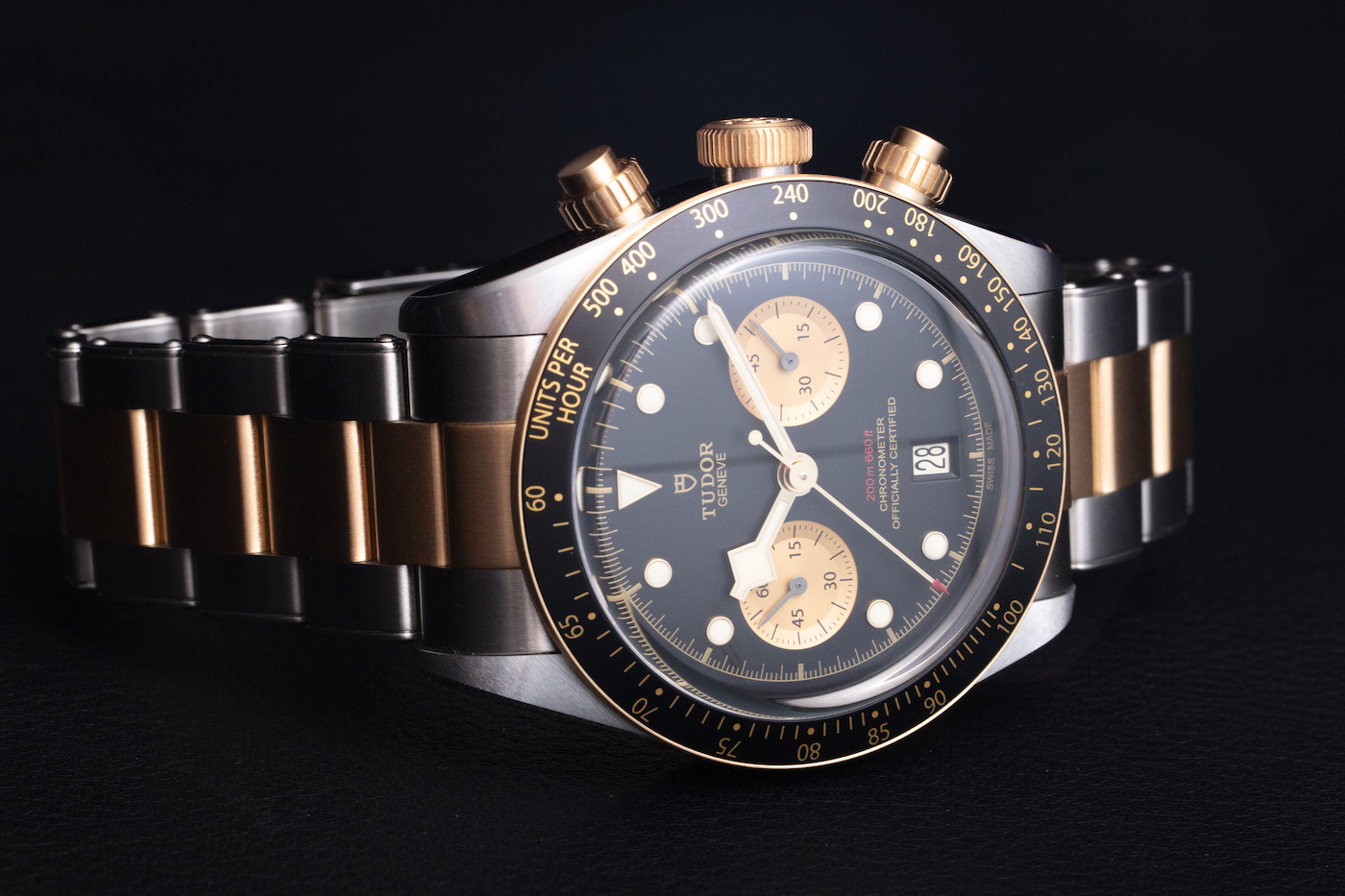 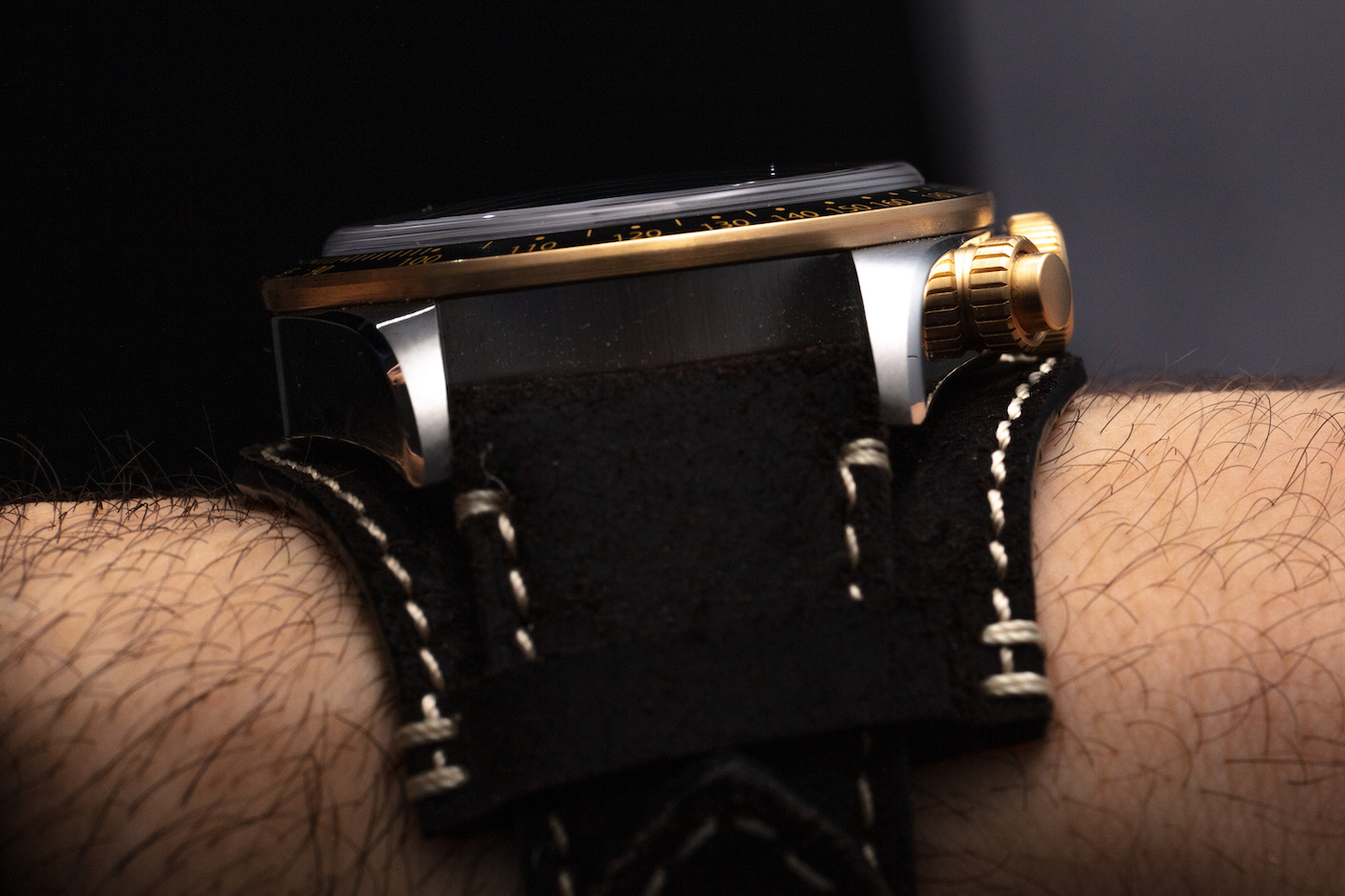 There are some things that really only matter to the most hardcore watch enthusiasts, and nomenclature is one of them. It does irritate me that basically every Tudor now has to be a Black Bay, and that’s particularly true of this watch. This gripe aside, even with the Heritage Chrono from years ago is my favorite modern Tudor by far, the Black Bay Chronograph S&G holds its own in the family of a brand known for divers. 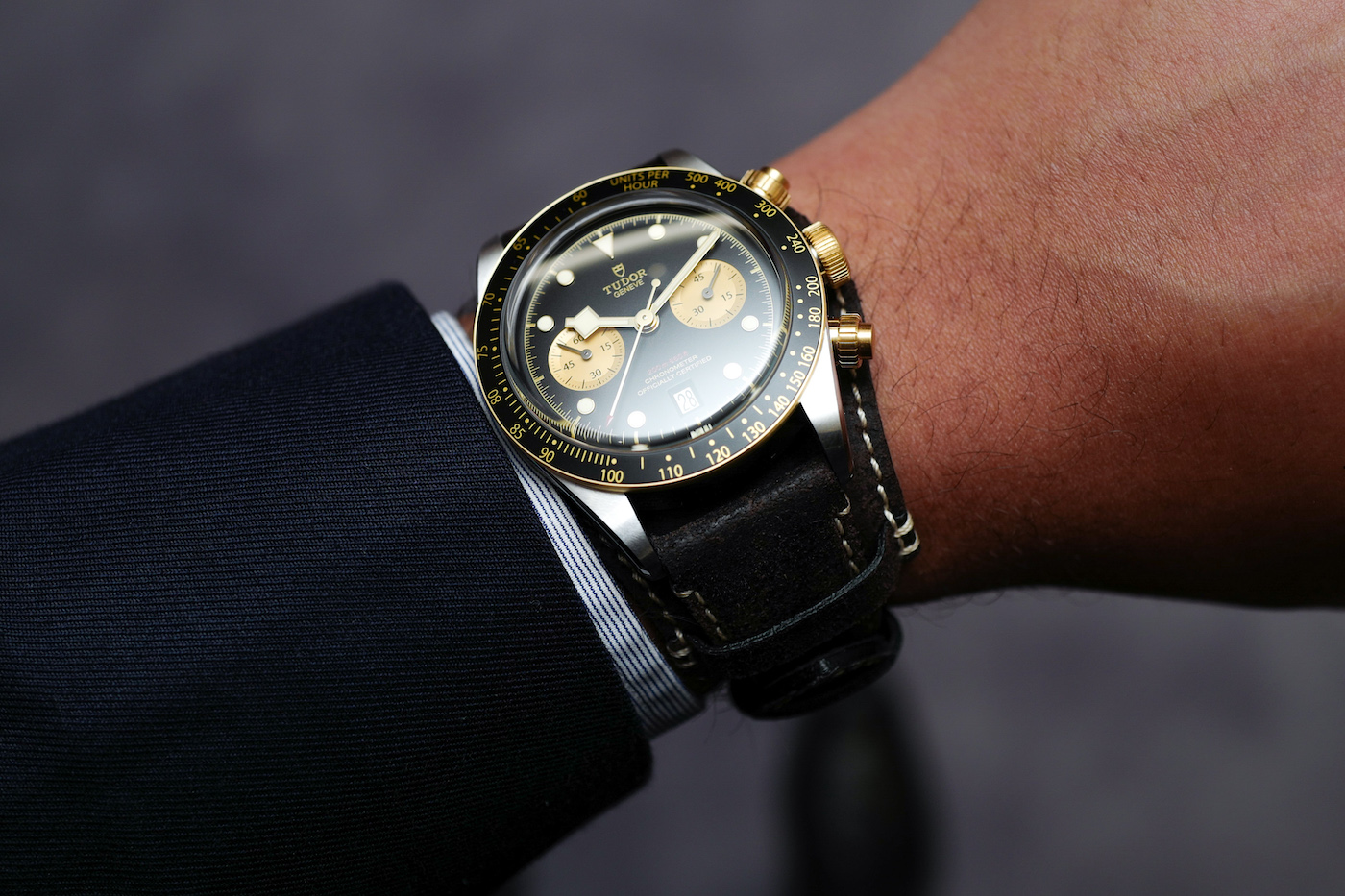 Interestingly, the pricing actually varies drastically between the straps and the bracelet, to a degree that it takes my opinion of the pricing from “fair” to “pushing it.” The price for the Tudor Black Bay Chronograph S&G on fabric strap or leather Bund strap is $5,600 while the price on the two-tone steel & gold bracelet jumps up by $1,200 to $6,800. You can learn more about the Black Bay Chronograph S&G here and more about Tudor Watches in general here.