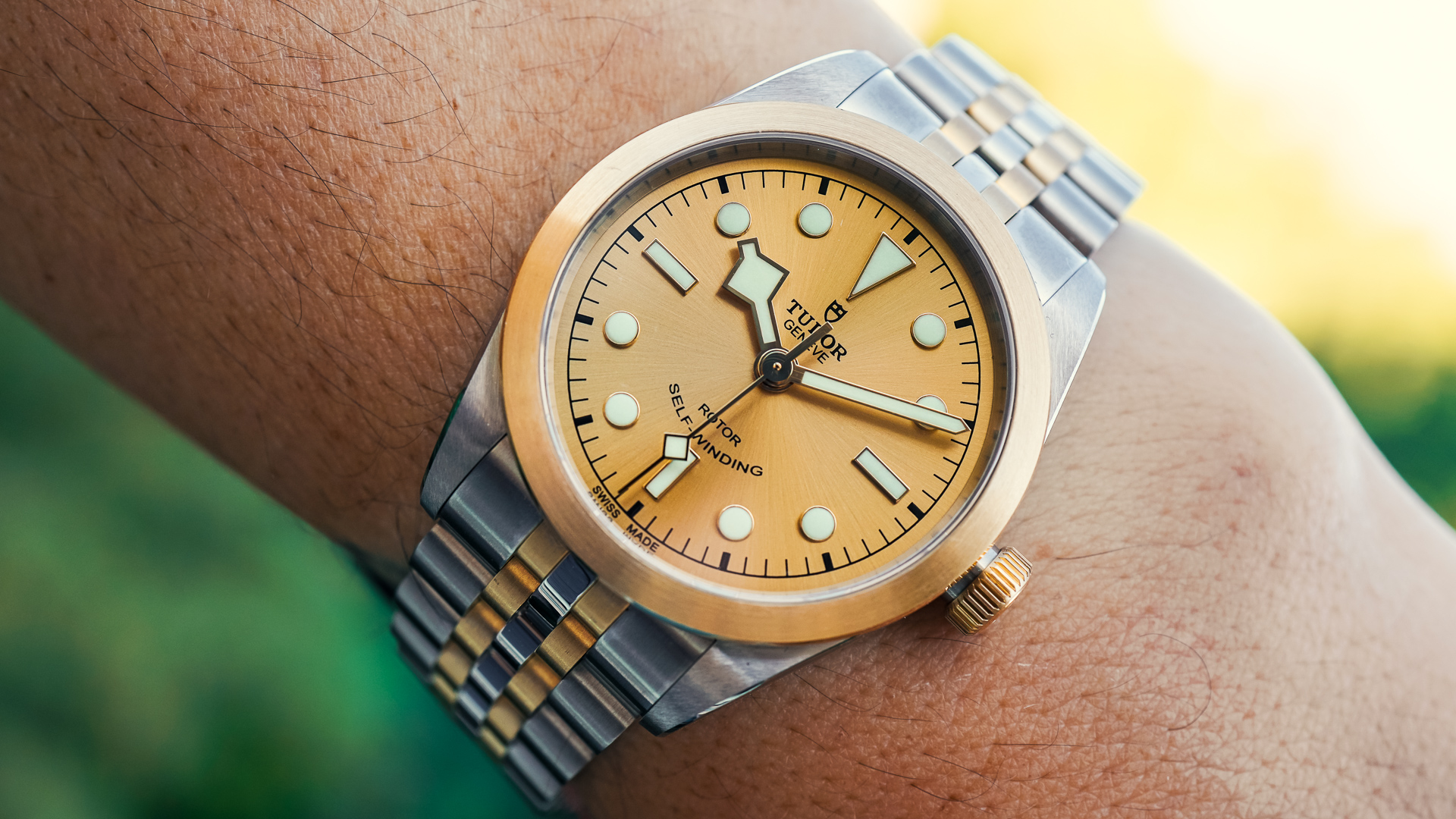 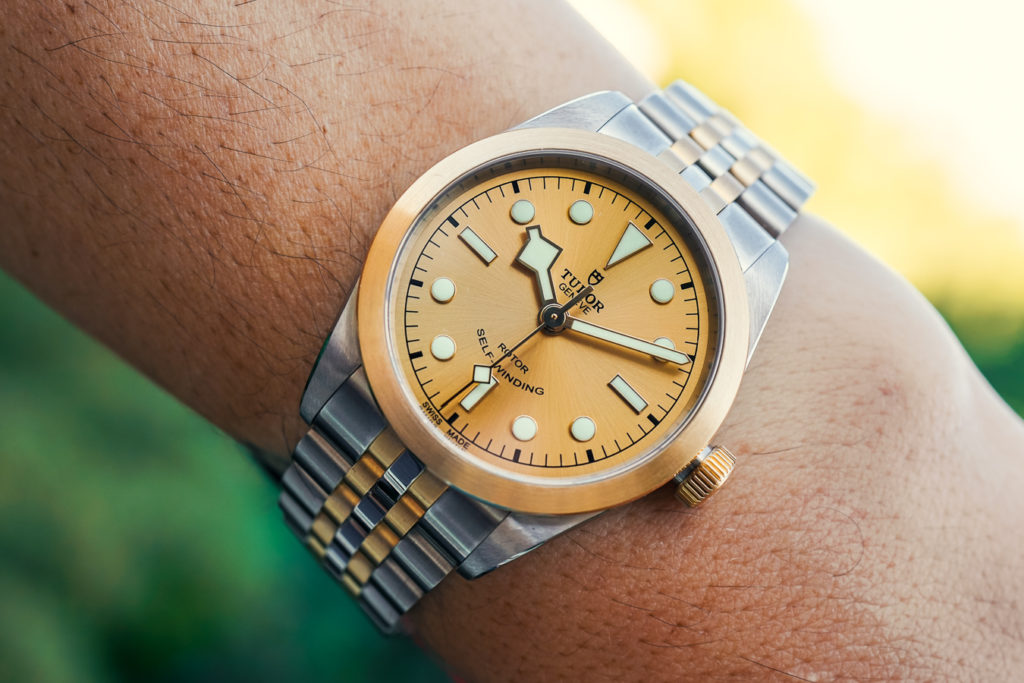 That two-tone. It’s so hot right now. But how could it not be? They say it takes around two decades for a style cycle to complete its revolution, and given that things tend to happen a bit slower in Switzerland, it would seem the watch industry is right on schedule to enjoy a mid-eighties style renaissance when it comes to all things two-tone or bi-color (colloquially referred to as ‘bico’ by the cool kids). Tudor seems to be leading the trend curve with not one, not two, but three hard-charging two-tone watches introduced in the last 18 months or so: the Black Bay S&G (particularly with the champagne dial) diver from 2018, the Black Bay Chronograph S&G introduced at Baselworld back in March (read Bilal’s impressions right here), and the new Black Bay S&G 36 or 41mm on its bi-color five-link bracelet, also introduced this year, though it wasn’t until only recently at the Couture tradeshow in Las Vegas where we had a chance to go hands-on. 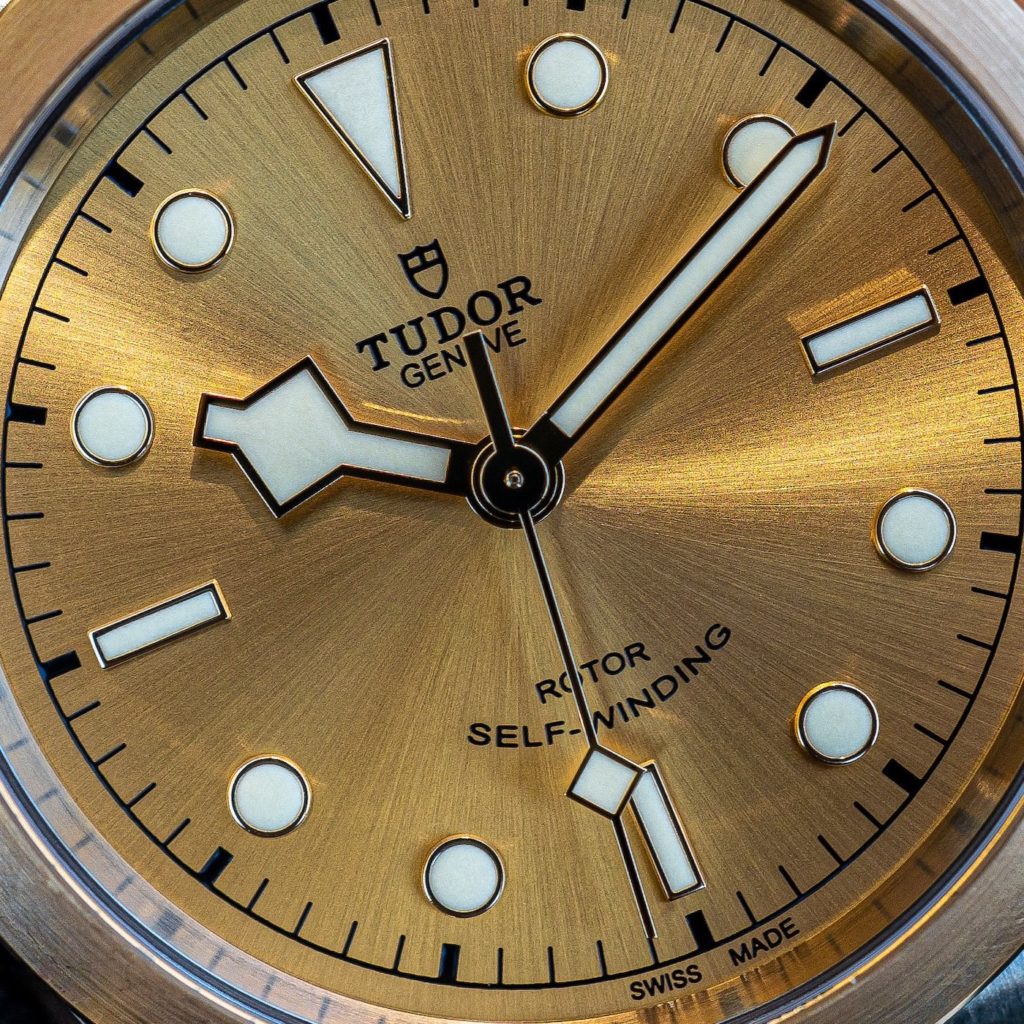 All photos by Bilal Khan and Zach Piña

Traditionally speaking, a two-tone watch would be rendered in some combination of steel and precious metal – solid rose or yellow gold, the addition of which would invariably drive the price well beyond what a traditional Tudor customer might be expecting to pay. For reference, a comparable two-tone 41mm Omega Seamaster Aqua Terra with a rubber strap starts at around $8,000 while a two-tone Datejust from Tudor’s sister brand Rolex starts at $12,700 (be sure to read Ariel’s comprehensive review of this watch right here). However, the 41mm Tudor Black Bay S&G comes in at a fraction of the aforementioned at $4,150. To deliver the warm, creamy tones of genuine gold without the considerable upcharge, Tudor caps the steel bezel & crown, and bracelet center link cores with enough gold that enables them to be naturally refinished throughout the life of the watch – results that one could never achieve with thin gold plating methods, or worse – a gold-colored PVD coating, also common amongst far more inexpensive watches. 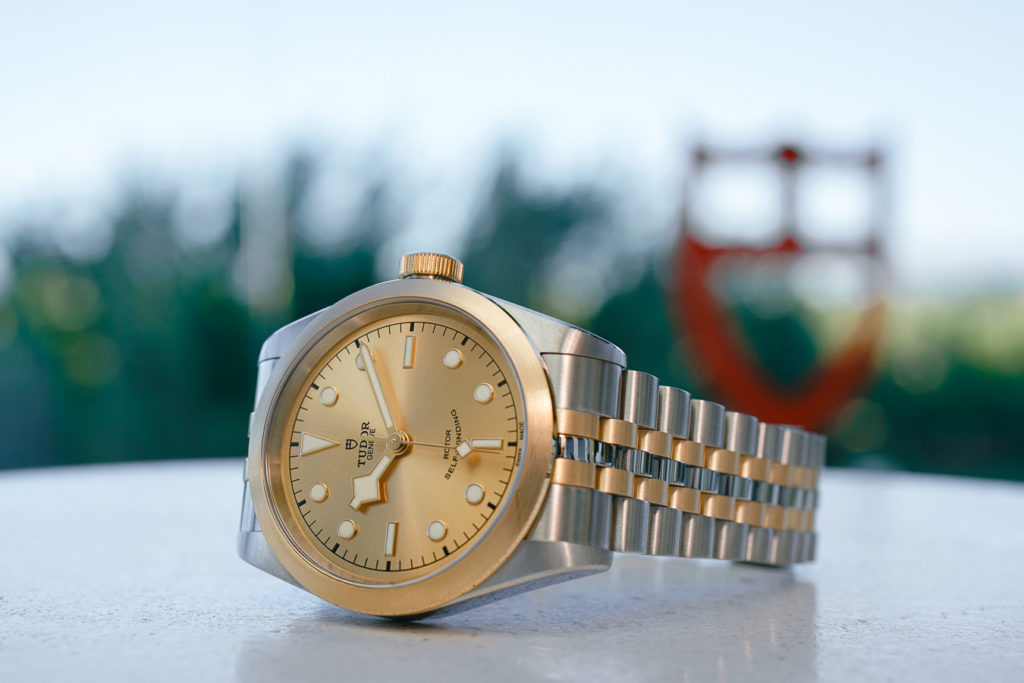 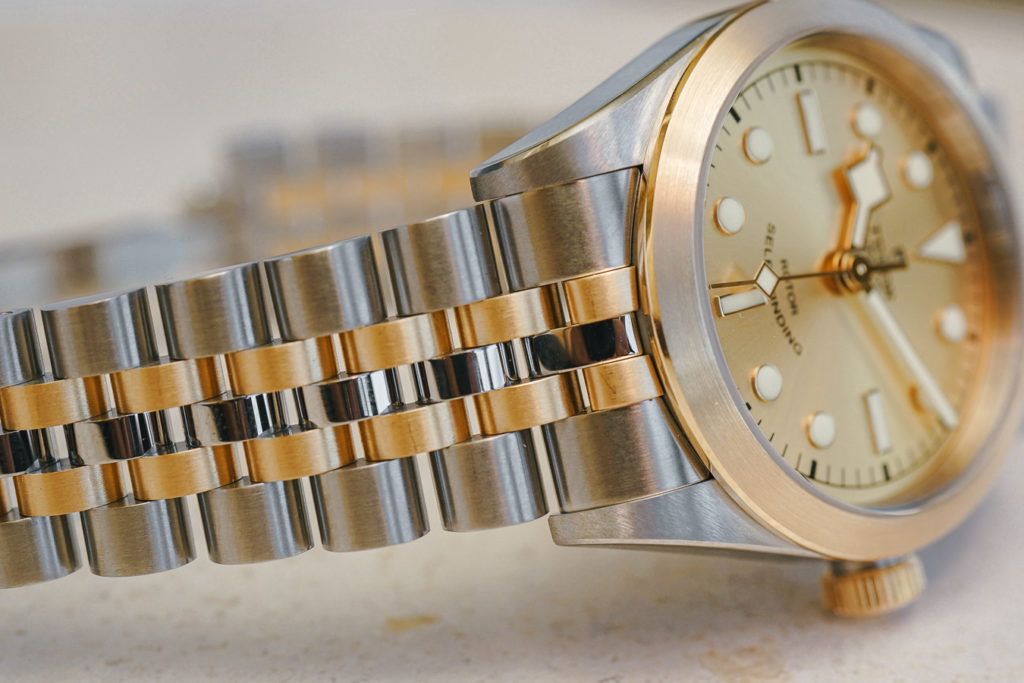 The end result is a long-lasting luster that only a genuine precious metal can provide, without the considerable upcharge. What makes the S&G really special though are the unique tones of the gold itself, which carries a hazy, late-summer warmth that’s not overly polished or precious – all elements that are instrumental to Tudor’s brand identity and positioning. If you’ve not yet been taken by the two-tone trend, or never warmed to the South Beach vibe channeled by your father’s solid-gold Datejust, the Black Bay S&G’s satin visage bears a much more casual, youthful approach to precious metal, and one that absolutely deserves a second look. 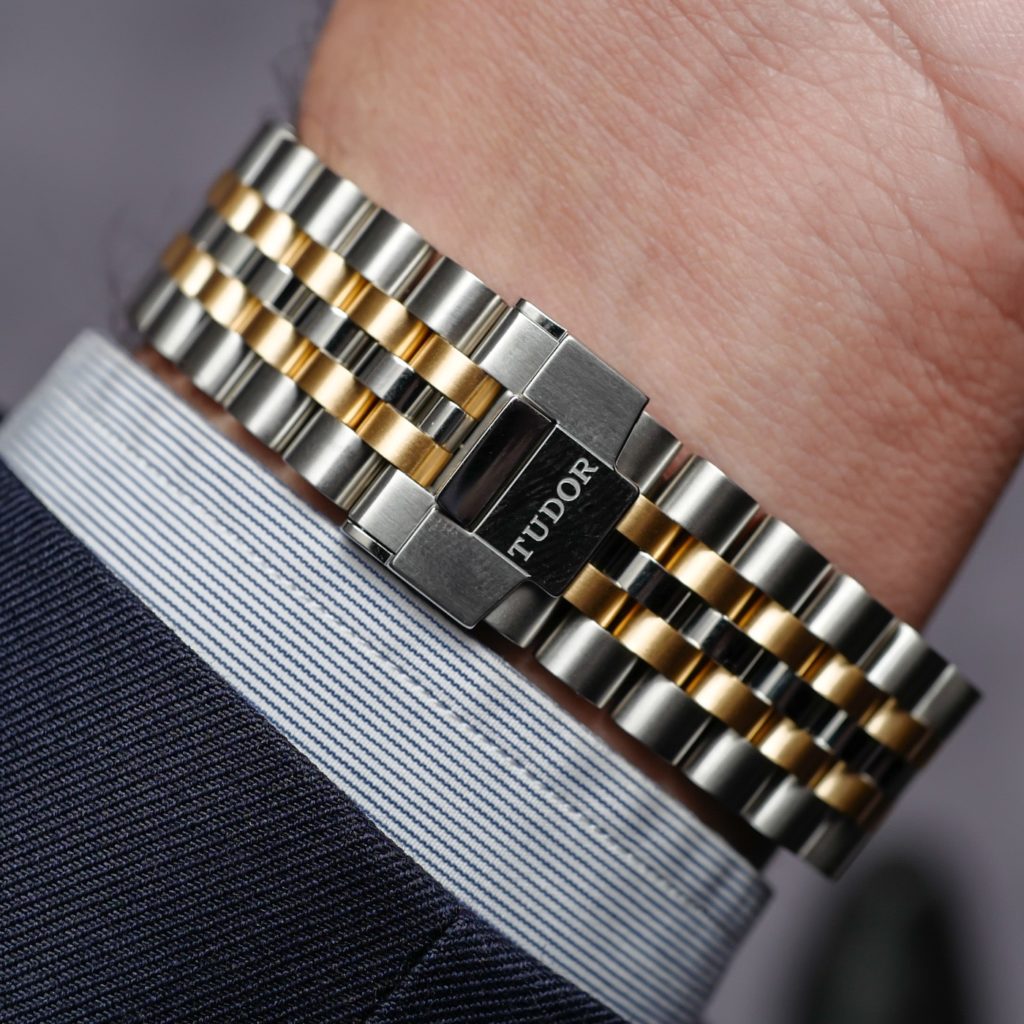 Contrary to Tudor’s wildly popular Black Bay dive collection, the non-diver watches like the S&G are not yet fitted with manufacture movements, but rather still utilize ETA 2824 movements. Of course there’s no real detriment to relying on such reliable, long-running movements, though you do miss out on the COSC-certified accuracy, increased power reserve and enhanced shock resistance that characterize the MT caliber movements. The bracelet is one of the real highlights here though, with its five links, and matching satin-brushed finish. The small beads articulate around the wrist perfectly, don’t pinch hair, and unlike the Rolex jubilee two-tone, the polished center link is stainless steel, creating a sporty pinstriped effect that not only dials down the overall volume of gold on the watch, but adds an additional welcome degree of contrast between the different textures and tones. It’s finished with Tudor’s excellent fliplock safety clasp, which uses tiny ceramic beads in the locking mechanism for a smooth, satisfying engagement every time you close it. 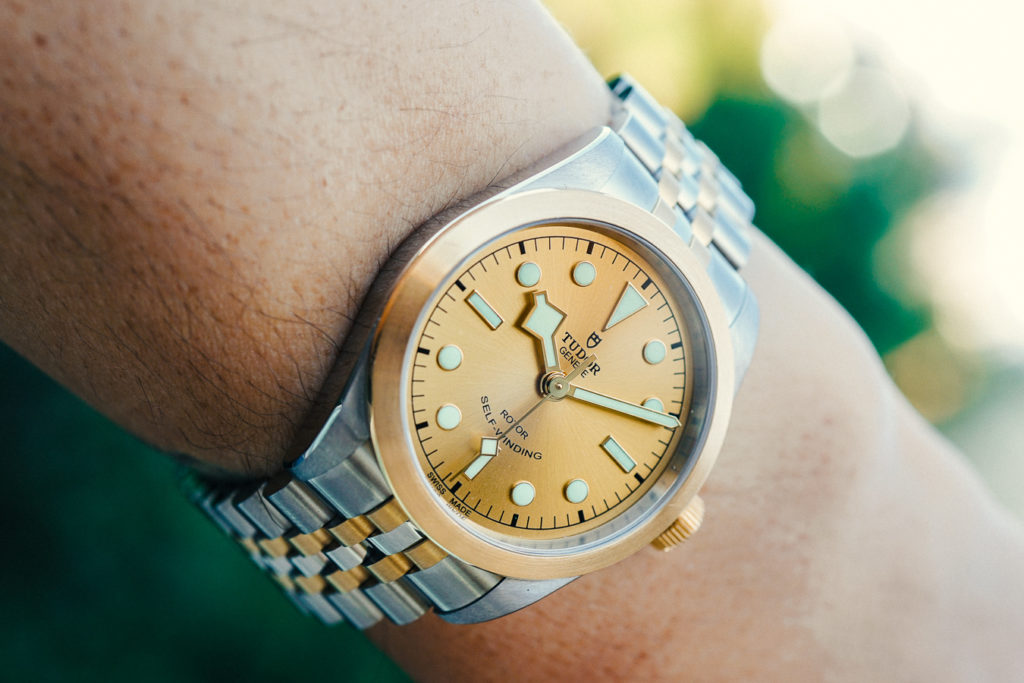 The vintage-inspired Tudor Black Bay collection is a big one indeed – with 47 individual variants spanning a multitude of sizes, capabilities, case finishes, and thus intended customers. The Black Bay S&G in question (sans rotating bezel) bears 150 meters of water resistance, and is available in three different sizes: 32mm, 36mm, and 41mm, each in two dial options: black lacquer and champagne. If I had to choose though, the radially brushed gold dial is an absolute knockout. I also prefer this particular execution in its 41mm size, having spent time with the black-dialed 36mm variant introduced in 2017, which surprisingly felt too small for my 6.5” wrist. And though the two-tone absolutely does it for me, for those chasing the Black Bay’s ability to transition more effortlessly between sport and dress, the monochrome black or blue dialed variants in full stainless steel might ultimately prove to be a more versatile alternative. 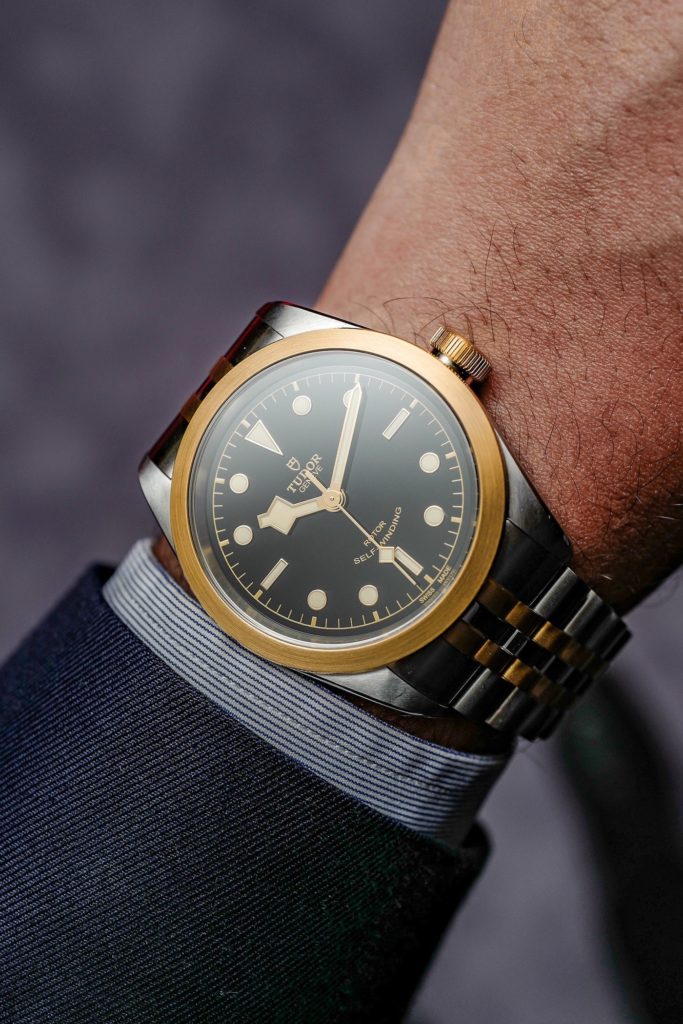