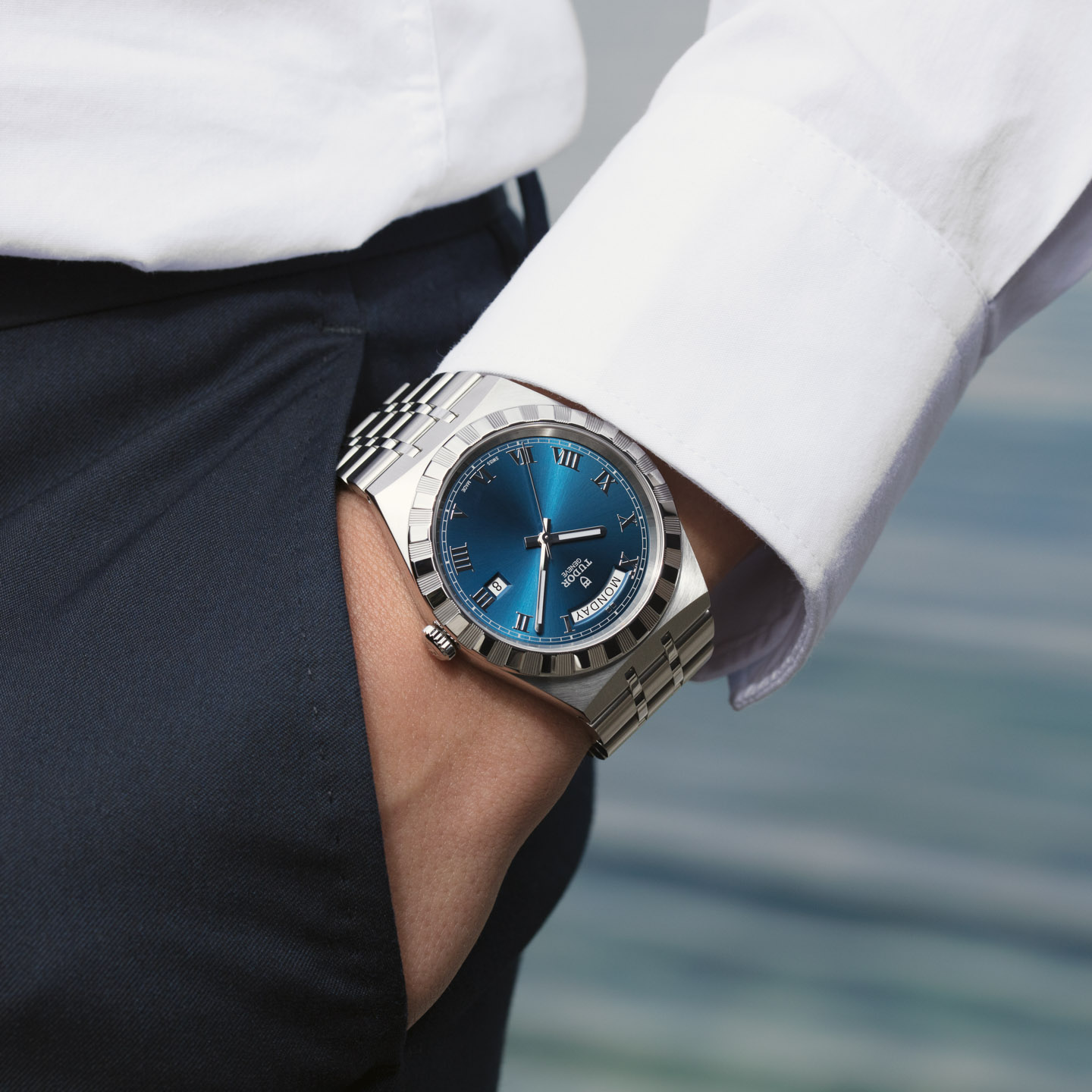 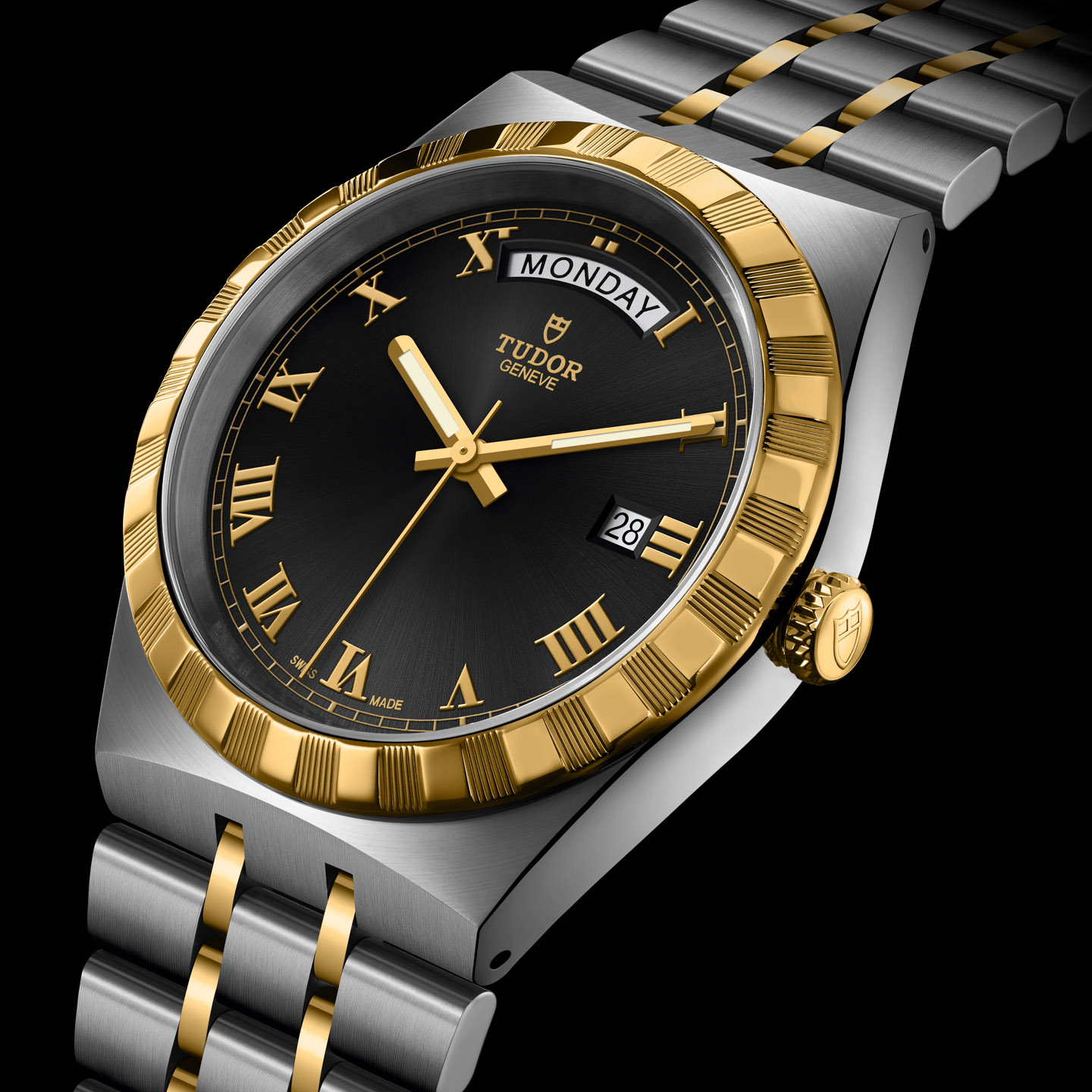 When Rolex’s sister brand Tudor returned to the United States (and UK for that matter) in 2013, the brand did not take its entire collection with them. Instead, Tudor in the United States was almost exclusively a sports watch brand (the Tudor Style – reviewed here – was not a major commercial success) with emphasis mostly on the wide Black Bay collection as well as the Pelagos tool-style watches. A number of dressy Tudor watches remained exclusive to other parts of the world. Now in 2020 Tudor launches an updated Prince Date-Day or OysterDate watch which has been turned into the “Tudor Royal” family.  The new collection of integrated bracelet watches is now available around the world, and helps bring a major part of the Tudor brand experience out of its almost exclusive previous existence in the Far East.

Tudor debuts a series of over 50 Tudor Royal watches between four case sizes and a series of dial and material options. For men, the Tudor Royal 41 (28600 series) mm and 38mm (28500) are of interest, while it is worth noting that for women a 34 (28400) and 28 (28300) millimeter size option is also available. The Royal can be interpreted as the Tudor version of the Rolex Datejust or the Day-Date – depending on the version. Since Tudor’s original debut in the mid 1920, the brand has been a lower-cost alternative to Rolex. Often Tudor models have mimicked Rolex analogs in name, style (or both). More recently Tudor has expanded beyond that with more original models (such as the Pelagos for example). With that said, a major part of the Tudor business model is to offer lower-cost alternatives to Rolex watches. As such, Tudor watch prices more or less top out where Rolex watch prices start. So compared to a Rolex Day-Date or Datejust, the Tudor Royal is a real bargain. 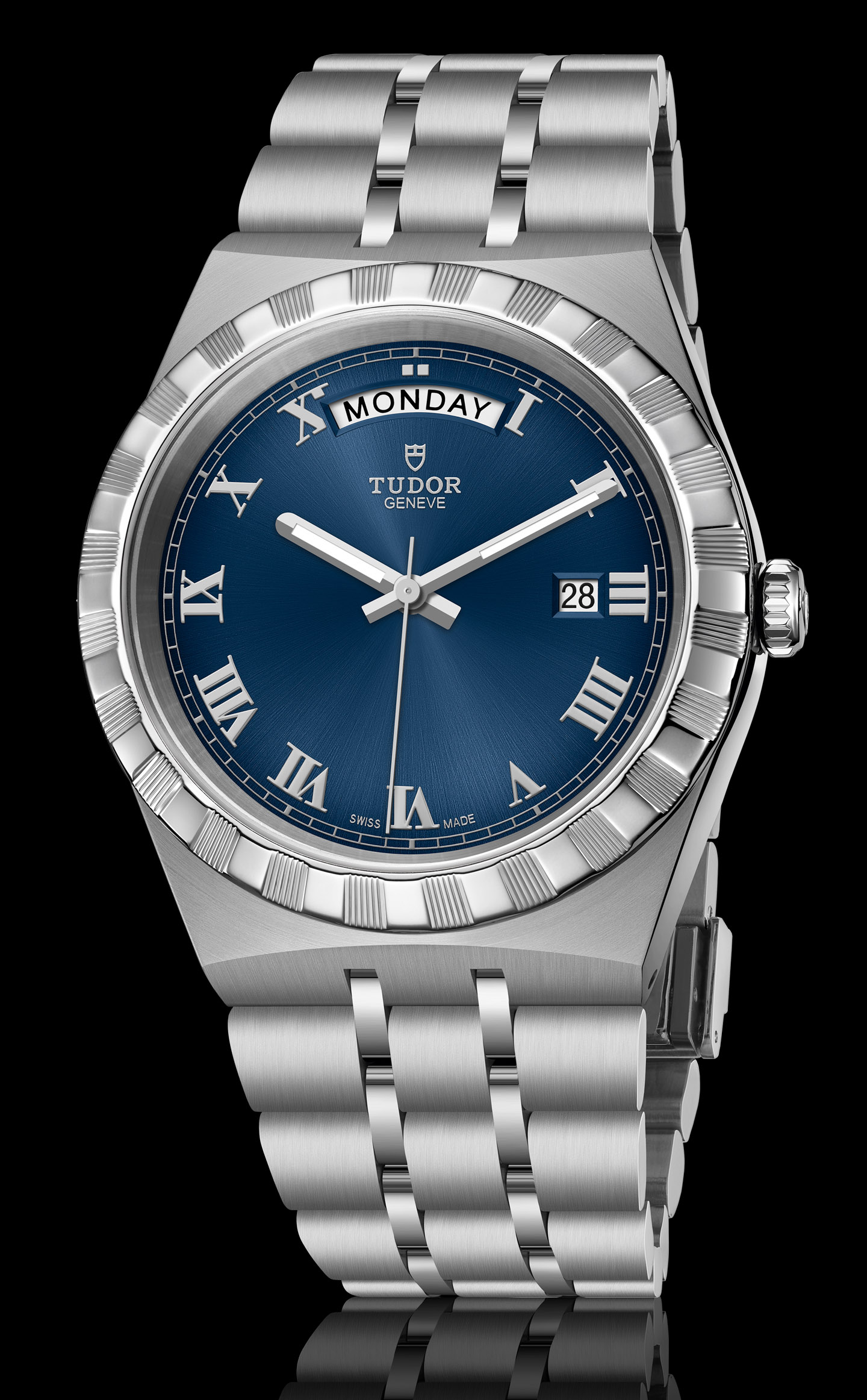 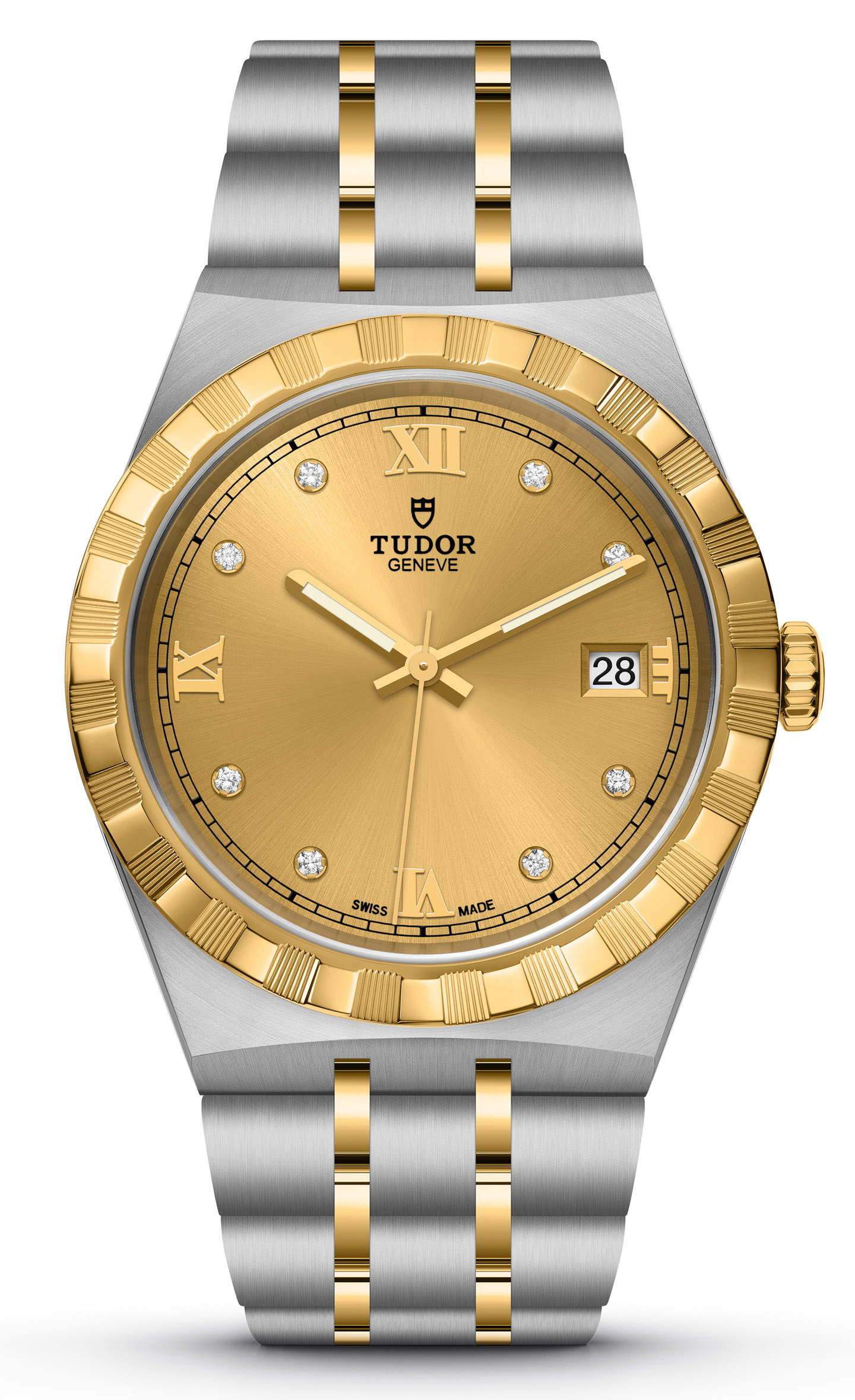 The Tudor Royal for 2020 falls neatly inline with the watch industry’s new fetish for integrated bracelet watches. Not that such watches are new, but there is a belief that consumers want them – so we are starting to see more and more timepieces with a bracelet design that is integrated with the case. When done right, a case’s lugs smoothly transition to a bracelet which elegantly tapers down a bit. That’s exactly the case with the Tudor Royal… and they do the visual trend real justice.

In addition to steel, Tudor also offers two-tone steel and 18k yellow gold versions (28603/28503 series) of the Royal. For the latter, 18k gold is used for the notched bezel, crown, and some of the bracelet links. The Royal comes with four dial colors for men, including black, blue, silver, and gold-toned. Indeed, not exciting colors in an era where lots of luxury watches are adopting bright colors, but Royalty as always been conservative by nature… Tudor does however offer some dial options with partial diamond-set hour markers to compliment the other full Roman numeral marker dials. 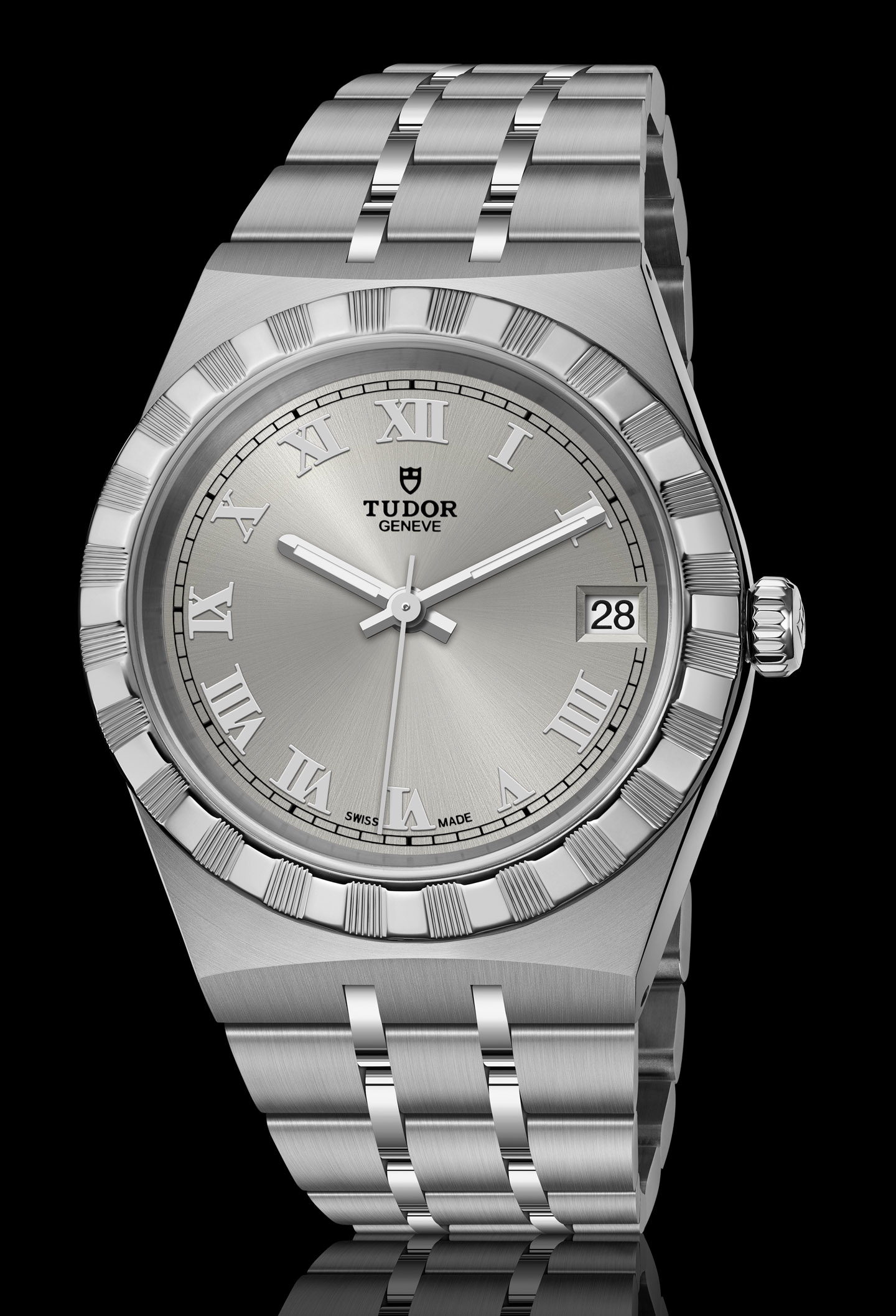 Tudor Royal watches are water resistant to 100 meters – the same as the Rolex Oyster case. The bezel design is Tudor’s answer to Rolex’s admittedly fancier fluted gold bezel. The Tudor notched bezel looks similar at a glance, but use a more basic machining technique to achieve its visual effect. In fact, according to watch collectors this bezel design is probably the most controversial element of the Royal and the other previous Prince or Tudor models which bore this bezel style. In fact this might be the first time such a bezel design was paired with the Tudor “Royal name” – which has been on hiatus for quite some time I believe. Given that “Tudor” is the name of the historic British royal family, and the brand has had a number of “courtly” names – “Tudor Royal” and “Tudor Prince” more or less feel like the same moniker. 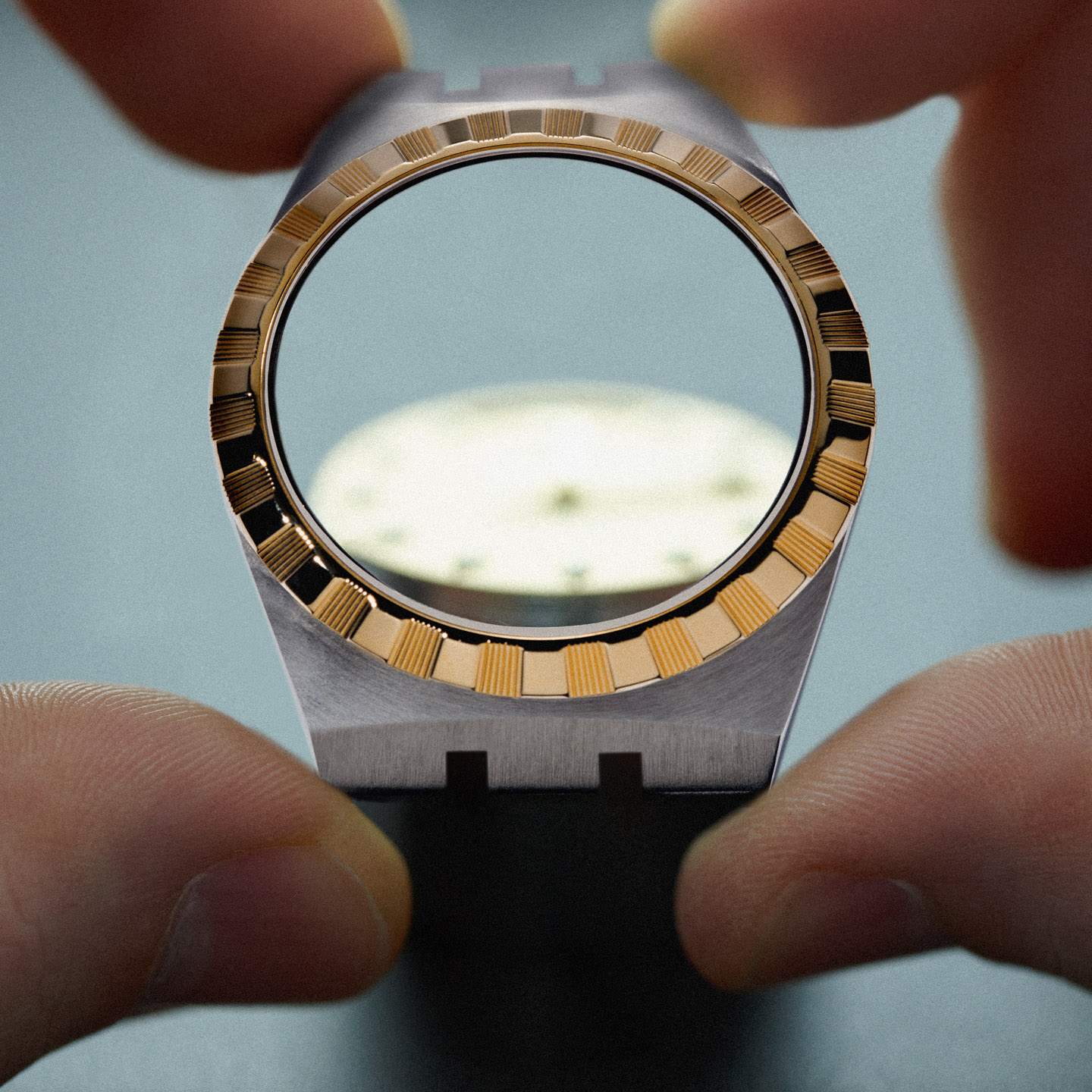 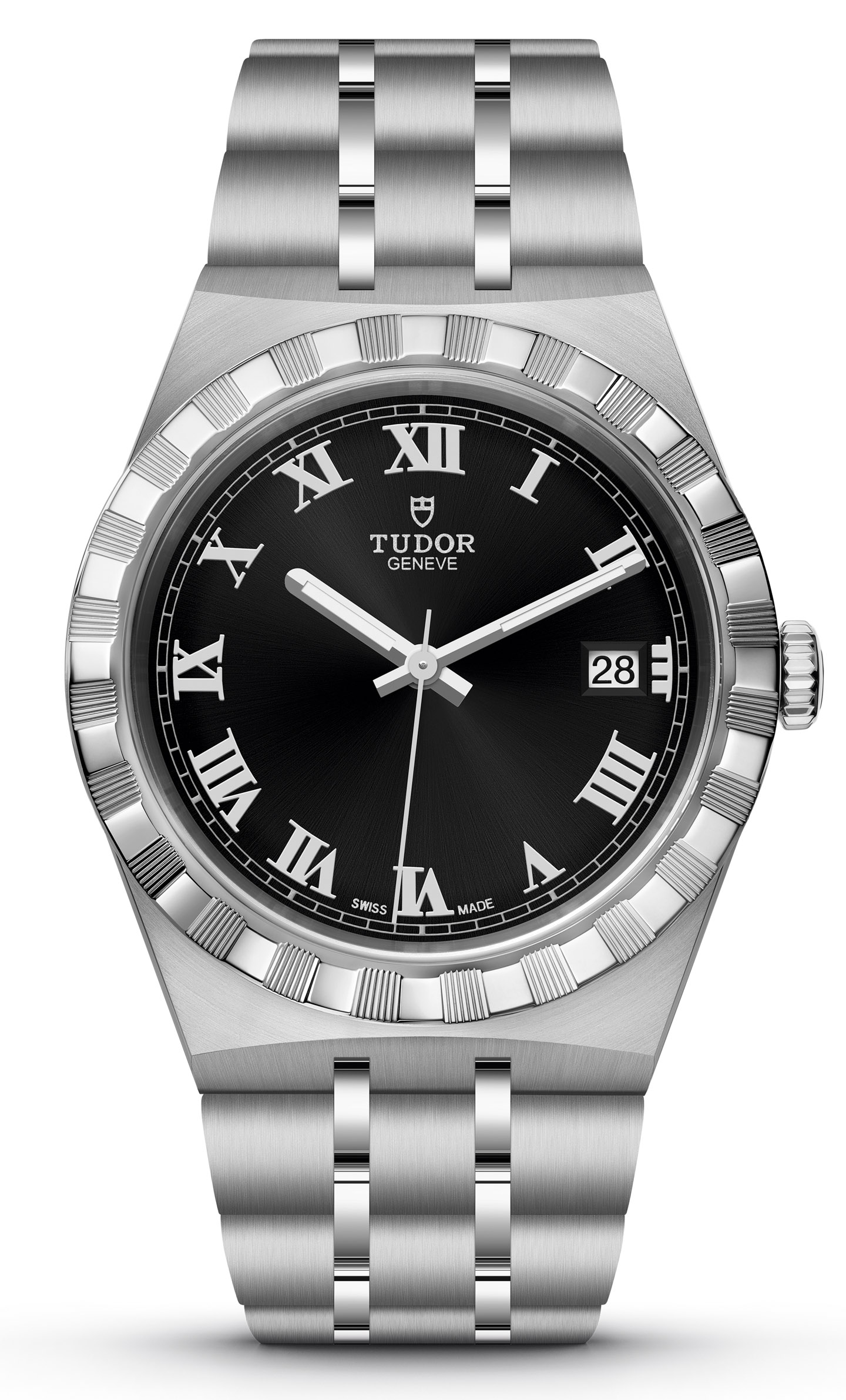 While some Tudor watches contain in-house made Tudor automatic mechanical movements, the Royal watches will feature Swiss Made ETA movements for the 28mm size and Swiss Made Sellita movements for the 34, 38 and 41mm sizes, but they are given a new series of caliber names from Tudor. The larger of the models is the Tudor Royal 41mm, and it is the only of the new Royal watches to feature a Date-Day (Tudor’s traditional way or writing Rolex’s “Day-Date” name) complication. It uses a Sellita SW-240-based automatic movement that Tudor refers to as the T603, while the Royal 38mm has just the time and date and makes use of a Sellita SW-200-based automatic movement (that Tudor refers to as the caliber T601).

Price is on Tudor’s side, as even the two-tone versions of the Royal are pretty affordable by comparative standards. What has yet to be seen is if Tudor’s legion of Black Bay fans (the Black Bay is often touted as an ideal entry-point into high-quality Swiss Made sport watches) will also take to the dressier guise of the Royal. My inclination is that while the Royal watches are pretty nice, Tudor will find appeal with different types of timepiece consumers than those who jumped on the Pelagos and Black Bay bandwagons.

Tudor will also likely be able to claim better case and bracelet quality as compared to much of the competition out there selling at similar price points. Watch collectors have in general not always been the biggest buyers of Rolex’s Datejust and Day-Date models – preferring their sport watches more often than not. I believe the same is true with Tudor, where enthusiasts gravitate toward sport watches while the “luxury lifestyle” models such as the Date-Day (before the Royal) were for more general luxury consumers. That is a shame because watch lovers do miss out a lot when not considering these otherwise excellent models.