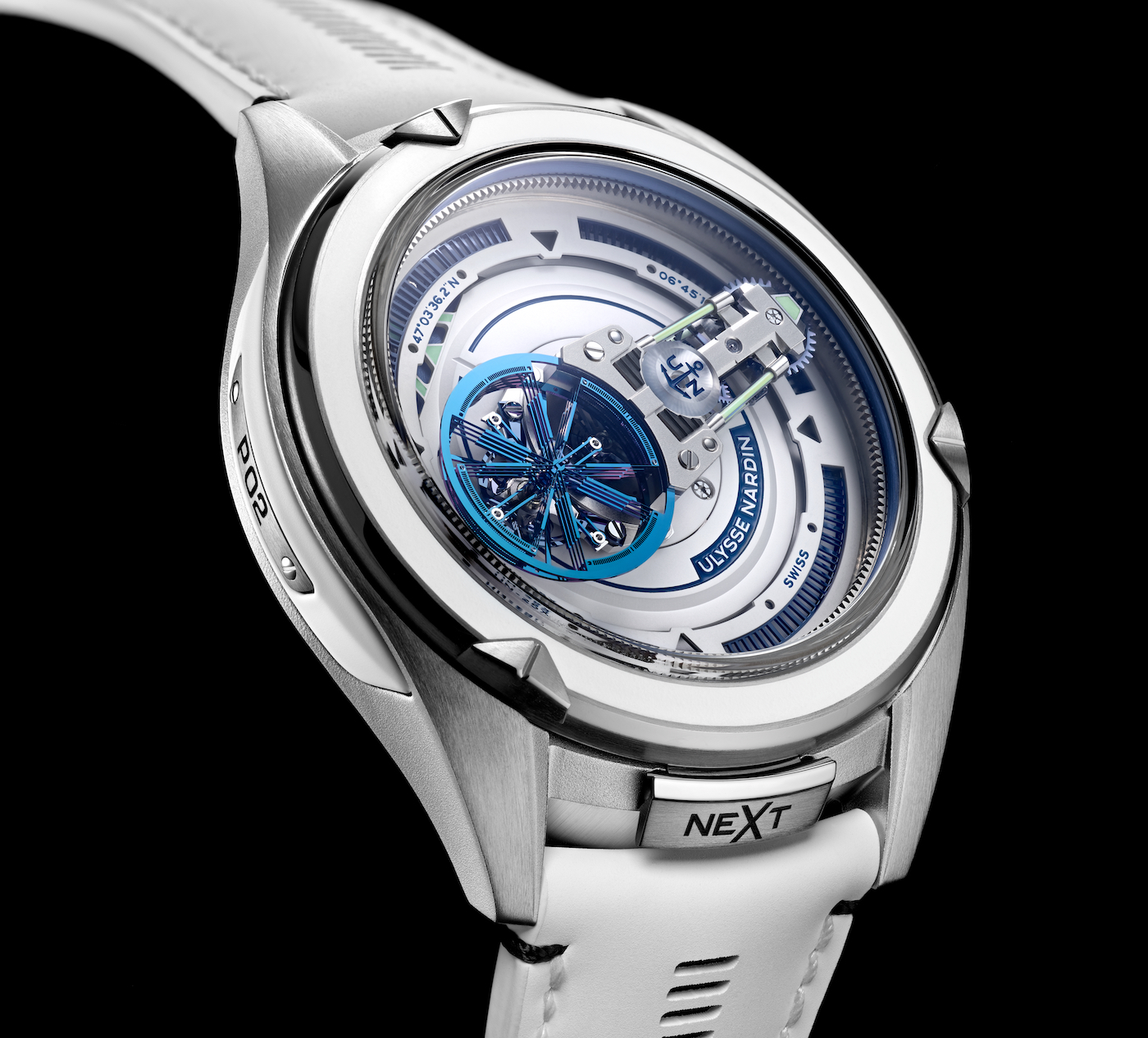 While Ulysse Nardin has a complement of watches under its name, the one line that no doubt springs to mind is that of the Freak. This truly is a freaky-looking lineup, with innovations in the gear train leading to some uniquely identifiable looks on the dial. Well, somehow, the brand has managed to raise the bar, once again, with the Ulysse Nardin FREAK neXt. 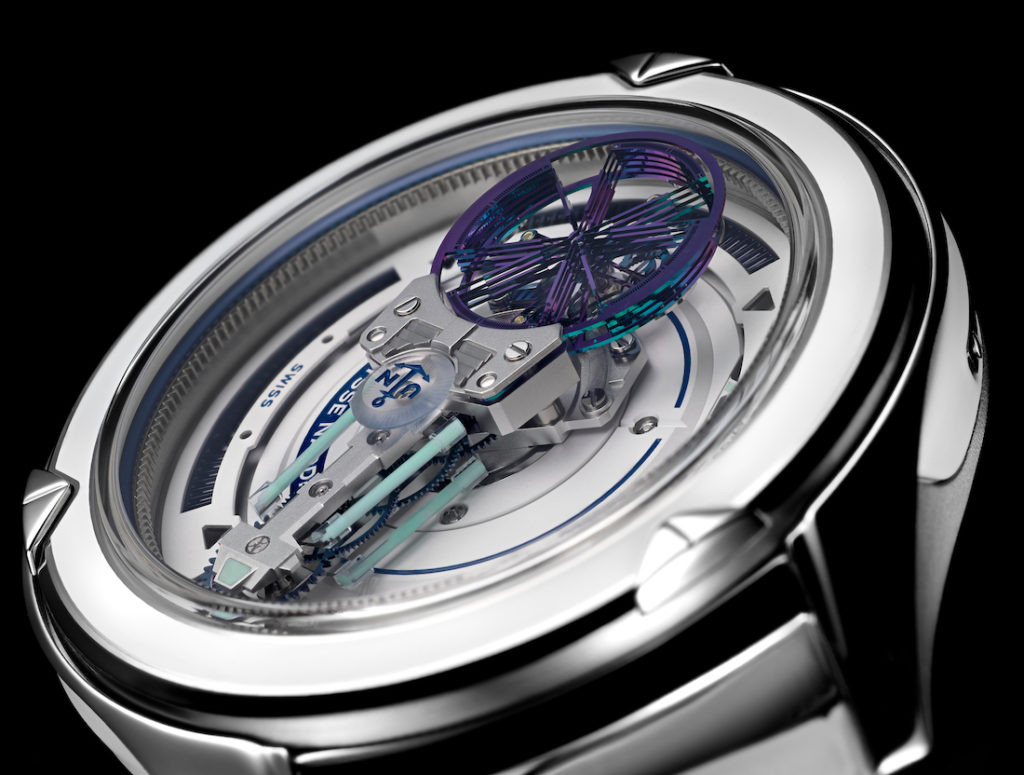 While I might wish they’d spent some of those creative juices on the name of the watch, the Ulysse Nardin FREAK neXt is choc-a-bloc with craziness. I read through the release a few times, and this movement seems like it’s almost powered by magic. Let’s take a step back. What is one of the main enemies of power transmission, particularly in a watch movement? Friction. It is because of friction that we’ve got jewels (for pivot points) and oil on those jewels. Or, if you’re Ulysse Nardin, you’ve got a handy material called silicium that brings flexibility, anti-magnetism, and friction-reducing capabilities to the party. While silicium has been added to other parts of the gear train, the balance wheel — or oscillator — has not been so graced. 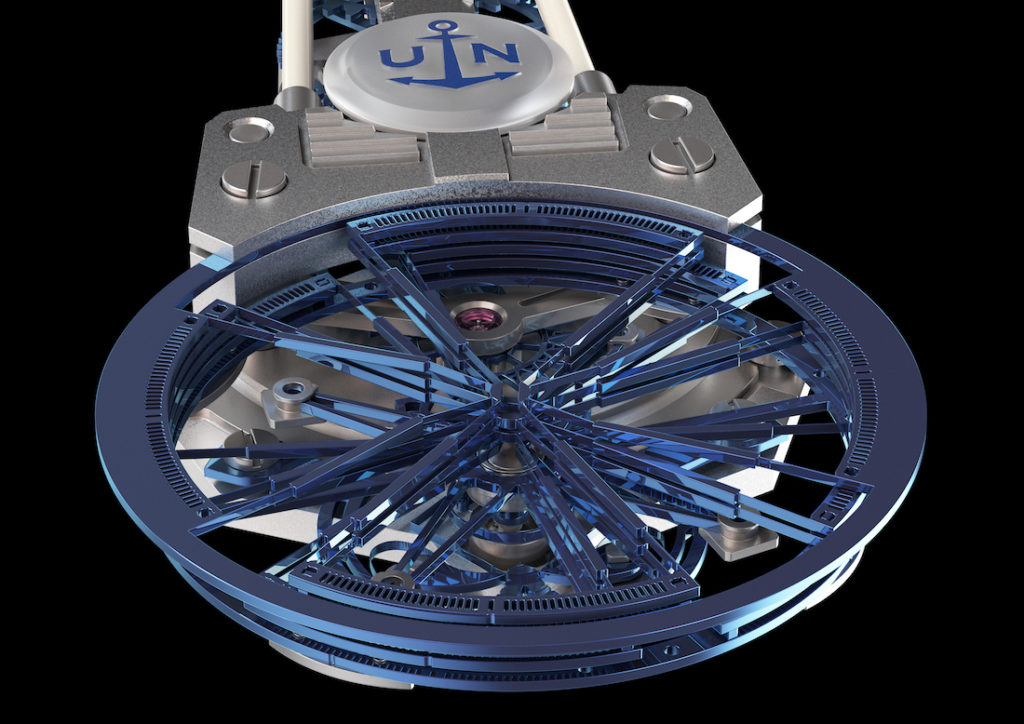 That’s what’s going on with the Ulysse Nardin FREAK neXt. Here, the balance wheel, as we know it, has gone away. It’s been replaced by 32 micro-blades of silicium. Not only that, UN has done away with the center pivot. Instead, it now has a “virtual” pivot and is somehow suspended in mid-air. Even with the modicum of understanding I’ve got around how traditional watch movements work, this concept of a pivotless, floating oscillator just boggles my mind. Perhaps it’s something that you have to see in person?  Well, no matter — I’m sure a reader or two will chime in to enlighten me in the comments below. For now, however, I reserve the right to put this into the category of technology virtually indistinguishable from magic. 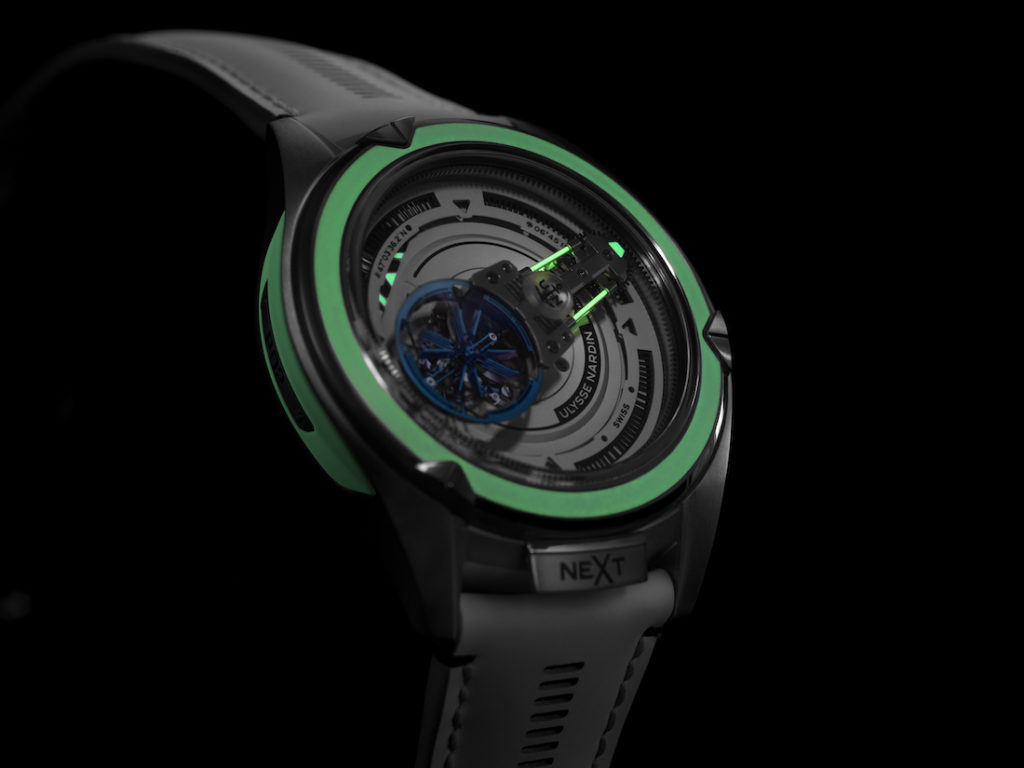 However you classify it, this oscillator in the Ulysse Nardin FREAK neXt manages to beat at 12 Hz (three times what we’d expect) and manages a power reserve of 70 hours. Hooray for eliminating friction, right? Which brings me to another part of the movement, the automatic winding. Here, in a watch that’s all about reducing friction, UN calls its winding mechanism the “Grinder.”  Aren’t grinders all about friction? Here, you’ve got an oscillating weight (which we’re used to) that’s hooked up to a frame with four blades that zips around and winds things up. Or, you know, generating mana for the rest of the movement. 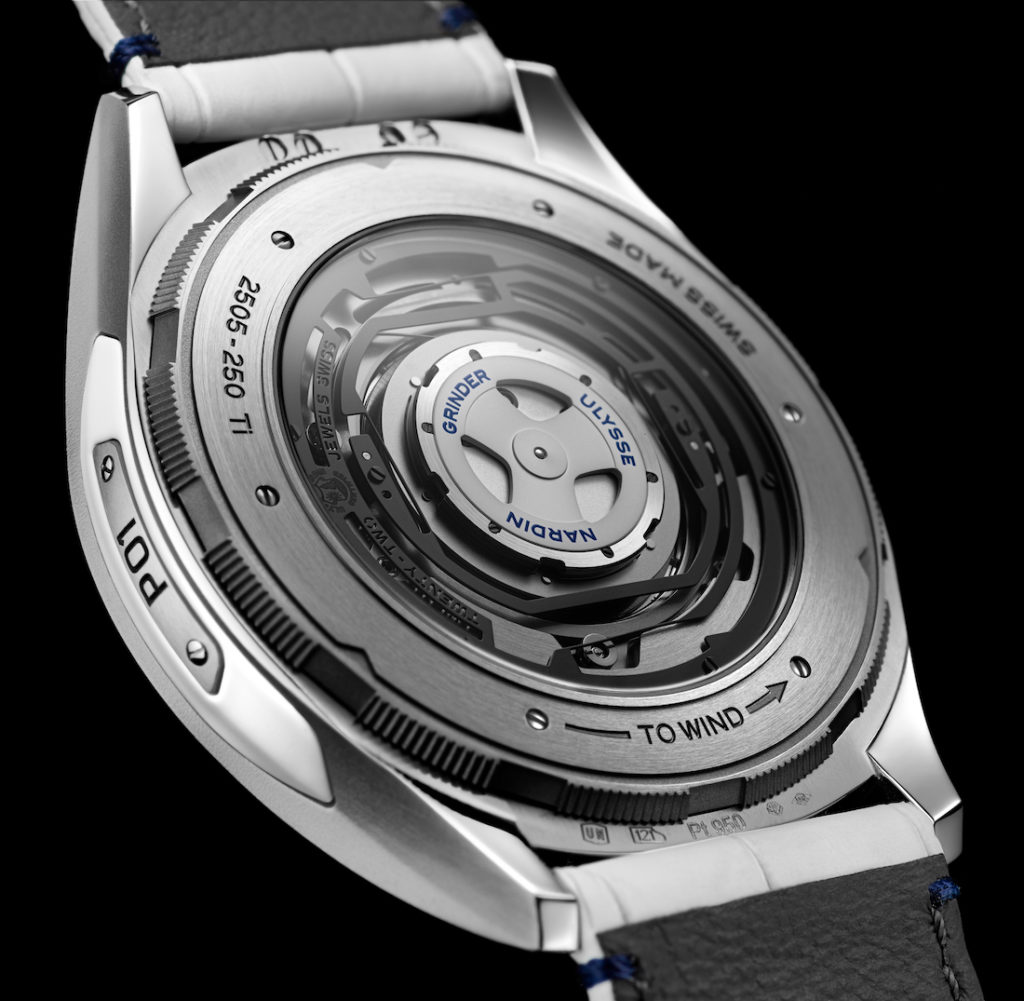 All of this is set into a case that, while high end, looks designed to draw attention away from itself.  You’ve got a crisp, retro-futuristic white look to things that hides (and then reveals) some unexpected bits of luminous paint on the watch. The case itself is made of platinum and titanium and is paired up to a stitched white rubber strap — or, somehow, an alligator strap with velcro closure (now, that’s freaky!) If you’ve kept up with me here so far, and have been holding out for the price, I’ve got bad news for you. I may have 99 problems, but affording the Ulysse Nardin FREAK neXt isn’t one. You see, it’s a proof-of-concept, meaning it’s not actually for sale.  Once they figure out how to channel that oscillating magic at scale, though, I certainly hope it pops up into a production model because it sounds like a head-scratching treat to see in person. For more information, visit ulysse-nardin.com. 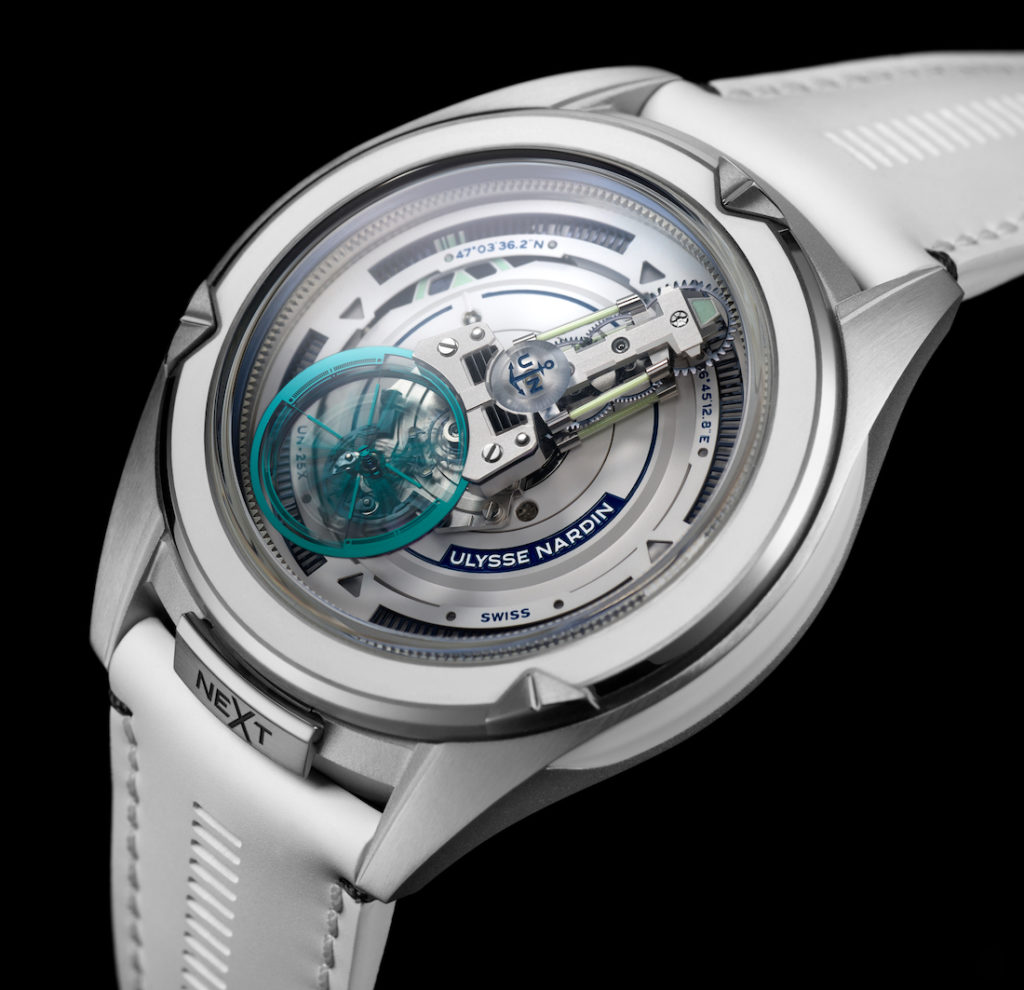