Creating a proprietary escapement is perhaps the ultimate challenge for all watchmakers, regardless of whether we are speaking about a craftsman working alone or about an entire company producing thousands or hundreds of thousands of watches. The escapement is the arrangement of components responsible for transferring the energy coming from the mainspring barrel through the going train (the series of wheels linked to the mainspring barrel) onto the balance wheel.

In other words, the escapement plays a major role in dividing each “beat” into equal doses, as every “tick” of the escapement releases only a small amount of energy from the mainspring. Ulysse Nardin has  announced a new escapement design – a hugely impressive achievement that greatly relies on the company’s extensive know-how in crafting silicon. 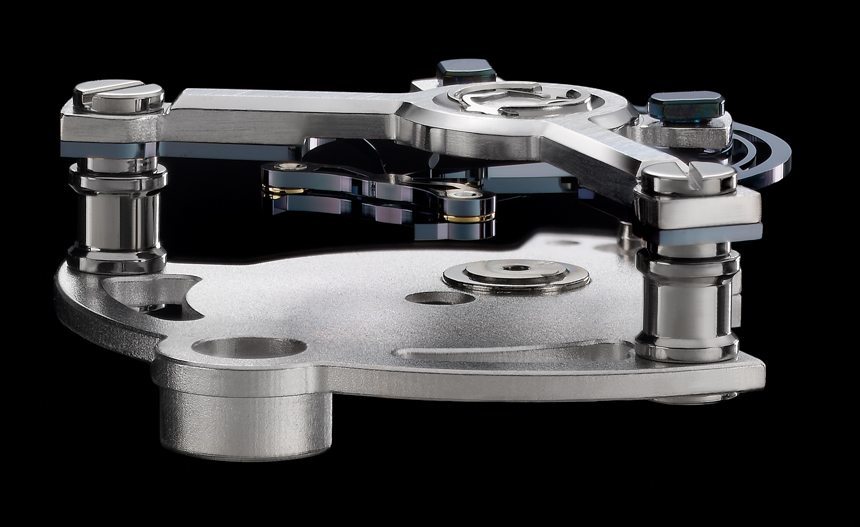 Before we discuss this new design which the brand likes to refer to as a “flying anchor escapement,” we should first obtain a better understanding of the peculiar material without which such a remarkable advancement would not have been possible.  Silicon (or in some parts of the world: silicium) was in fact titled and treated as the outlaw of all horological materials, when a handful of brands announced that they initiated researching its possible utilization in movements back at the dawn of the new millennia. Among the pioneers who presented the first breakthroughs linked to the incorporation of this “unorthodox” material were Ulysse Nardin, the brand that was first to execute an escapement in this metalloid.

And while there were many who objected to the use of silicon in fine timepieces, it was only a matter of time before its obvious advantages finally outweighed its lack of history in the industry. To begin with, silicon is hard enough to render lubricants redundant, and that coupled with its anti-magnetic attributes is helping to extend service periods and greater overall reliability. It couples its hardness with surprising lightness that makes for more efficient use of the movement’s energy, allowing for more power-consuming complications and/or improved power reserve. However, what probably is its most important property that ultimately allowed Ulysse Nardin to come up with its new escapement is the extreme precision with which silicon components can be manufactured. 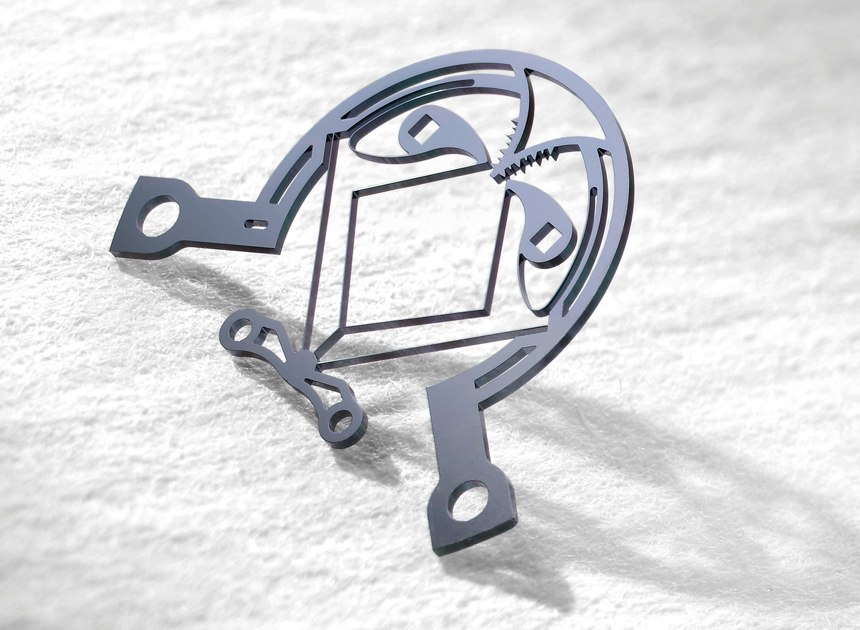 Now, discussing what this escapement does will certainly demonstrate why creating a new design is among the greatest challenges in horology–in advance let’s suffice it to say that it requires an ingenious idea that was planned to perfection and then backed up with the necessary state-of-the-art manufacturing abilities.

The reason why such precision is required is that this new anchor escapement relies on the flexibility that can be achieved by crafting some parts of the silicon frame (the component you see above) into microscopic blades. These blades (let’s call them that) are perpendicular to one another and bend under tension. An analogy I can provide is that of holding a ruler at its shorter ends in your two hands and as you apply pressure from both of its ends it will ultimately bend lengthwise–those who experienced the occasional boredom at math classes will certainly know what I am talking about.

Now just imagine the same “snapping” happens but at a level of extremely fine mechanics, i.e. with silicon blades that are a fraction of  a millimeter long and outright incomprehensibly thin. To make any material do this–propelled by the negligible force that is supplied by the mainspring–you really have to craft them with incredibly minor tolerances at a level of micro-mechanics. 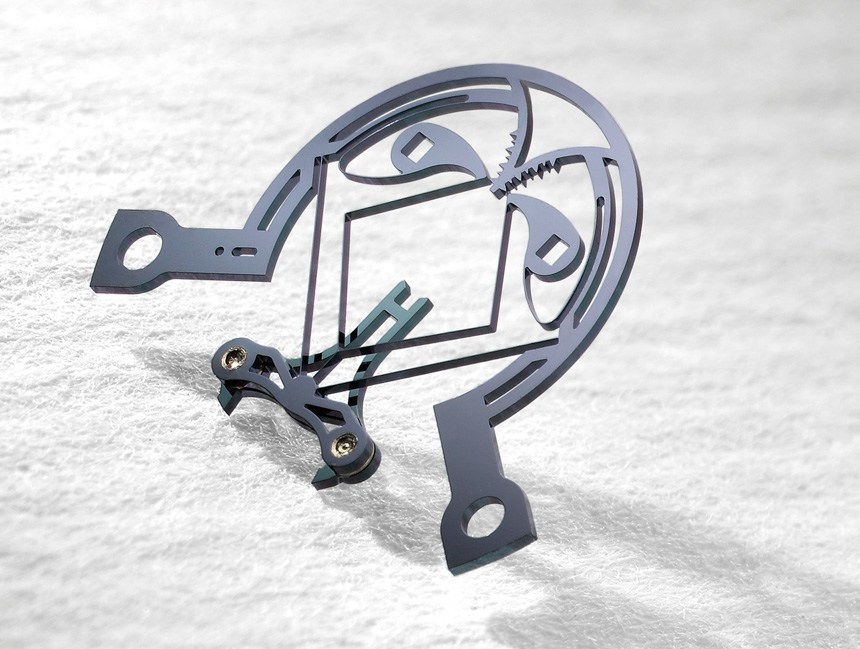 What happens in practice is as follows. With every semi-oscillation (every semi-rotation) of the balance wheel energy is transmitted to the blades which snap from one position to the other, much like a snap hair clip (as per Ulysse Nardin’s analogy). On the image above you will see the assembled frame which now has the pallet lever installed, which is that Y-shaped, fork-looking component in the lower left quadrant. What is unique about it is that it is installed onto the end of the blades and hence it is pivoted by the blades themselves. This means that the pallet fork is not held in place by a pallet staff which in turn is fixed between jewels but rather the fork is floating on the silicon frame, free from the friction that is caused when normal jewels are used. This is important because this “fork” plays a key role in transferring energy and every bit of fraction that is saved here can be transformed into better rate results.

To understand what happens in its operation you have to imagine the tiny blades in the middle snapping to the left and right, hence causing the fork to pivot. As the fork pivots, it stops and releases the escapement wheel (that futuristic looking wheel to the far left on the image below). From then on, things are “business as usual,” meaning that the escapement is driven by the fourth wheel of the going train (or the third wheel in case of a tourbillon). 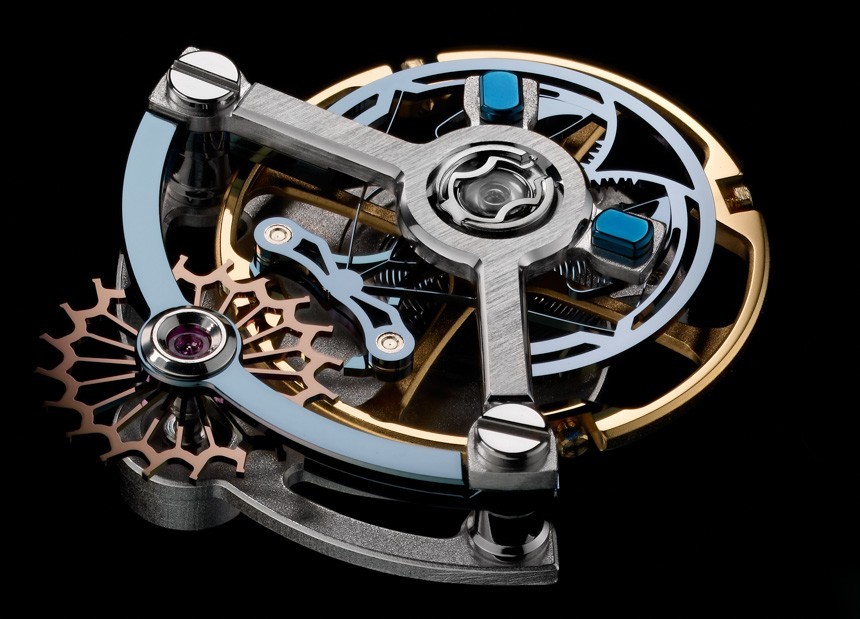 Again, the primary advantages of this design include the omission of lubricants from the escapement mechanism, the greater resistance to wear and tear, and also the considerably decreased friction through the exclusion of the pallet jewels. Ulysse Nardin says it took them seven years of research and development to create this system, a statement that I find perfectly plausible. A peculiarity of that extensive time frame is that even though silicon remains a scarcely (albeit increasingly) used material, a number of other brands have also researched its possible incorporation in a movement. The reason I am telling you this is that although it is based on a different assembly, Girard Perregaux have created their Constant escapement based on the exact same idea, that of a finely crafted silicon frame that contains microscopic blades which snap from one position into another.

Make no mistake, although the Constant escapement’s debut preceded that of the Anchor escapement by a year (having been announced at Baselworld 2013), there can be no doubt in that both brands have invested years and large sums in developing their very own escapements–even if both designs are based on the same principles. With that said, Ulysse Nardin presented a remarkable achievement with this new anchor escapement, an invention that functions in its own beautiful–and incredibly nerdy–ways, ultimately propelling the fine watchmaking industry forwards by prioritizing engineering prowess and years of research and development instead of going down one of the countless much less challenging avenues of marketing.  ulysse-nardin.com