Urwerk Unveils The New UR-120 AKA Spock ‘Live Long And Prosper!’ Watch 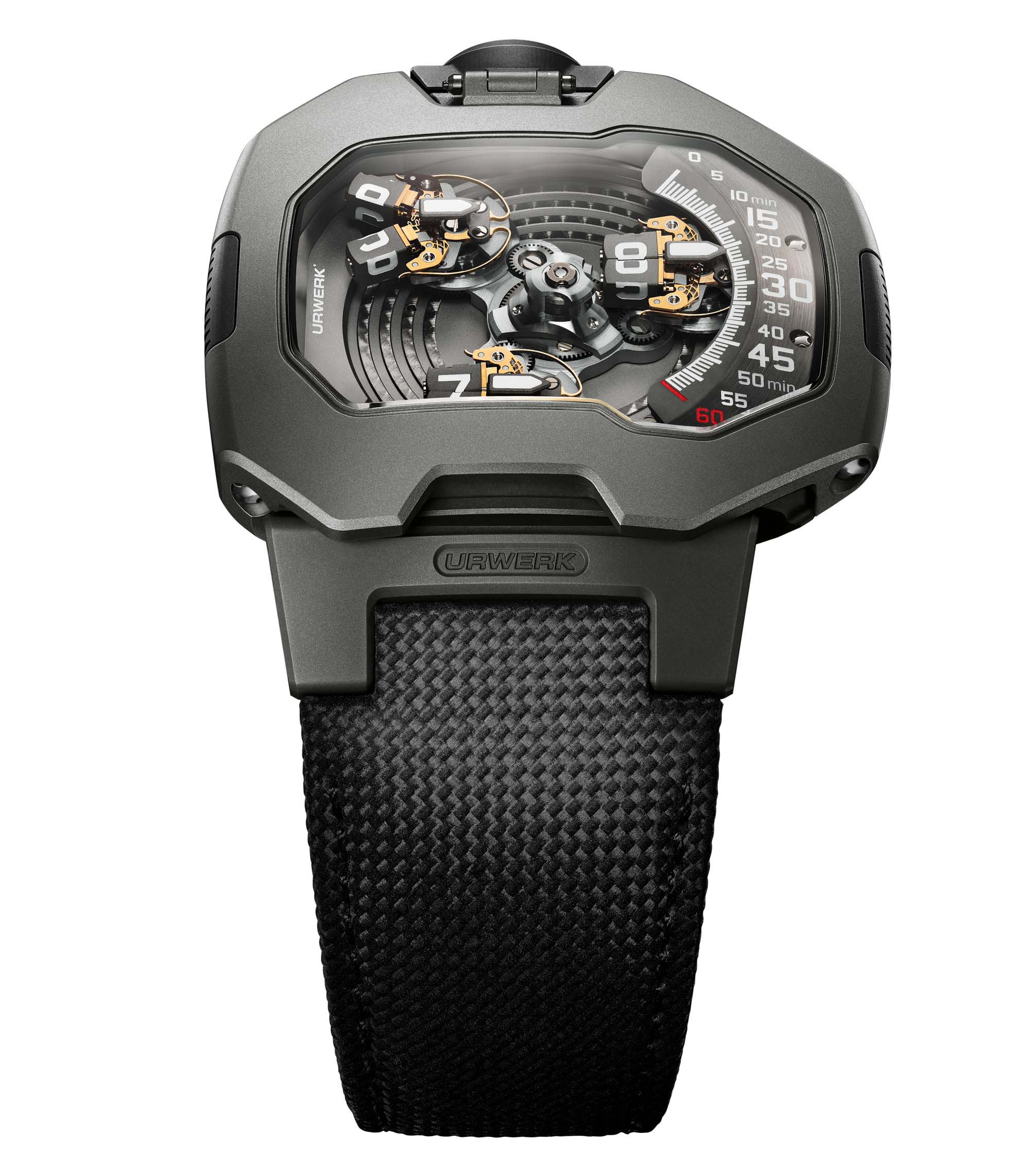 Although there are a number of luxury watch brands that offer thoroughly modern designs, Urwerk has a highly distinctive design language that doesn’t look quite like anything else within the industry. Overtly technical and space-age in their overall appearance, Urwerk watches frequently showcase modern materials and unconventional displays that put the mechanical technology of the watch front and center to create timepieces that almost look like they could be screen-worn props taken directly from the set of a Hollywood sci-fi movie. A space-themed mindset is an integral part of Urwerk’s underlying spirit and for years, the brand had a Star Trek sign hanging in its Geneva workshop that read “Live Long and Prosper” with the famous Vulcan hand gesture from the television show that features an outstretched hand with its palm forward and its fingers parted in the middle. Now the famous Vulcan salute serves as the basis of the design inspiration of the new Urwerk UR-120 AKA Spock watch that expands upon the core design of the UR-110 with a redesigned satellite system and an updated case structure that offers articulated lugs for a new approach to a familiar and fan-favorite case profile. 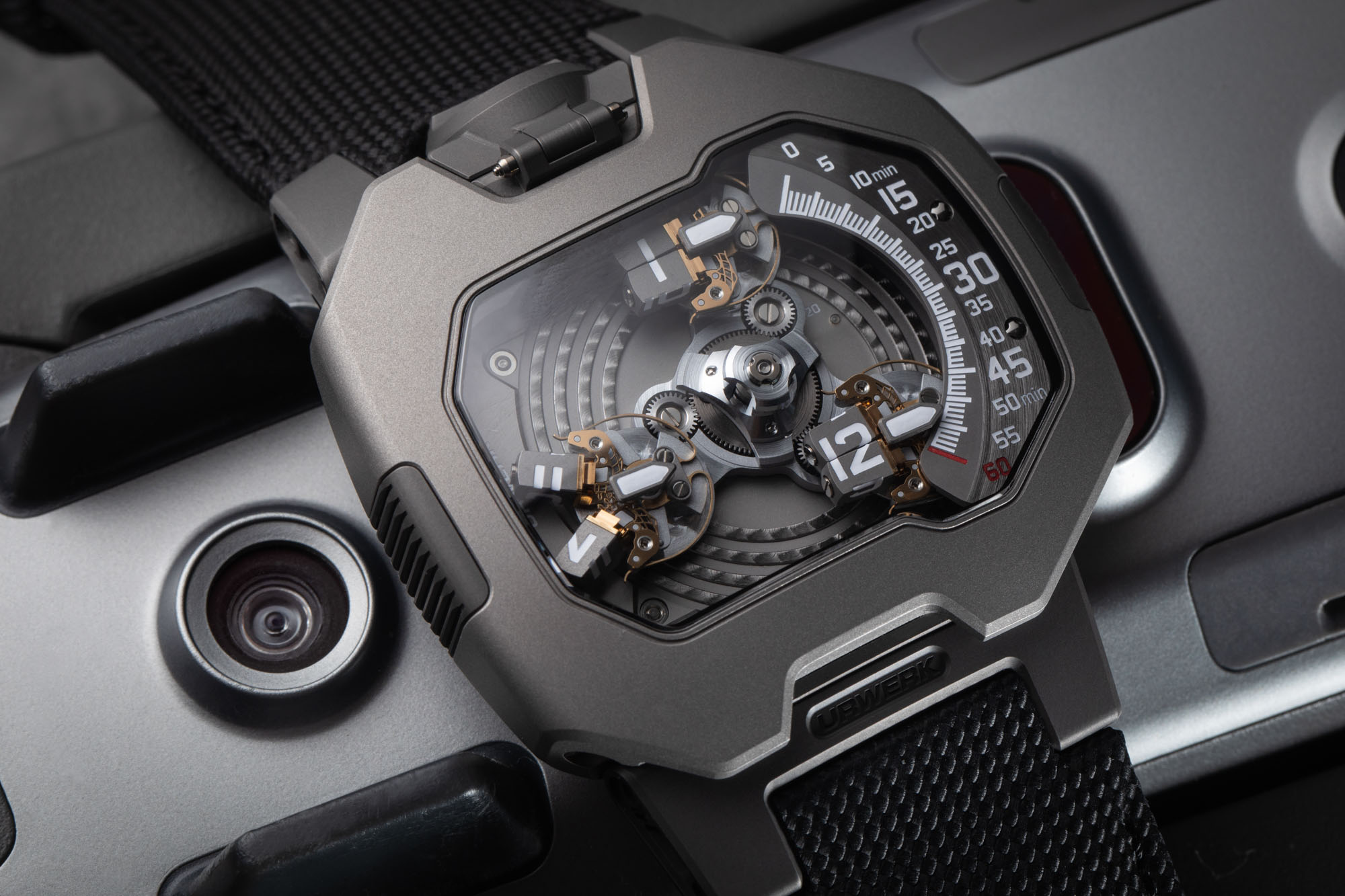 The case of the Urwerk UR-120 Spock watch features the same overall asymmetric design that can be observed on the UR-110, but with a number of updates to create a slimmer and more streamlined overall appearance. Measuring 47mm wide by 44mm lug-to-lug, with an overall thickness of 15.8mm, the case of the new Urwerk UR-120 Spock watch features a two-part design with a sandblasted stainless steel upper component paired with a sandblasted titanium lower section that connects together with hinges and lateral screws on either side to help create 30 meters of water resistance. The underlying structure could be seen as somewhat similar to the core case architecture of Gerald Genta’s Patek Philippe Nautilus, and the Genta inspiration is something that Martin Frei, Urwerk Chief Designer and Co-founder openly admits in the press release, stating that he admires this approach to case construction from a technical standpoint. Mounted to the top of the case is an asymmetric convex sapphire crystal, and the bezel surrounding it is completely smooth without any screws or notches, to create seamless and uninterrupted space-age lines. 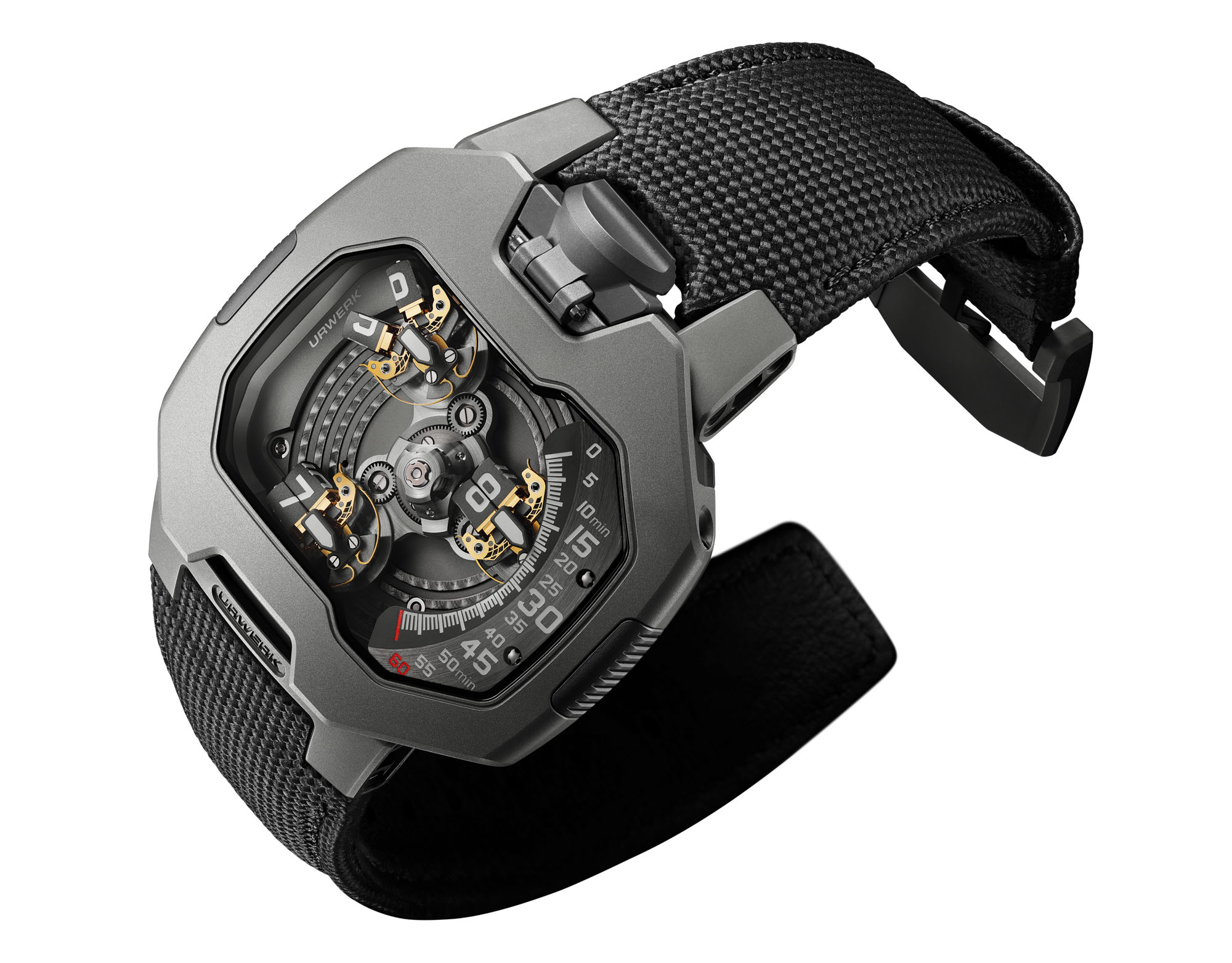 The titanium back section of the case features a small arc-shaped sapphire window that offers a view of the Windfänger — the star-shaped component that regulates the automatic winding intensity of the movement, while the center section of the caseback gets adorned by a deep grooved pattern and an engraved Urwerk logo. Additionally, unlike the existing UR-110, the case of the Urwerk UR-120 AKA Spock watch features lugs (a rather unusual design trait among Urwerk’s various models) and the lugs themselves are articulated, with the lug at 6 o’clock featuring a unique spring to help ensure that the case sits comfortably on the wrist. Lastly, fitted to the two articulated lugs is a strap made from calf leather that is embossed with a ballistic-type pattern. While the strap resembles one of the brand’s normal straps that is crafted from a synthetic technical fabric, its calf leather construction offers users increased comfort and flexibility. 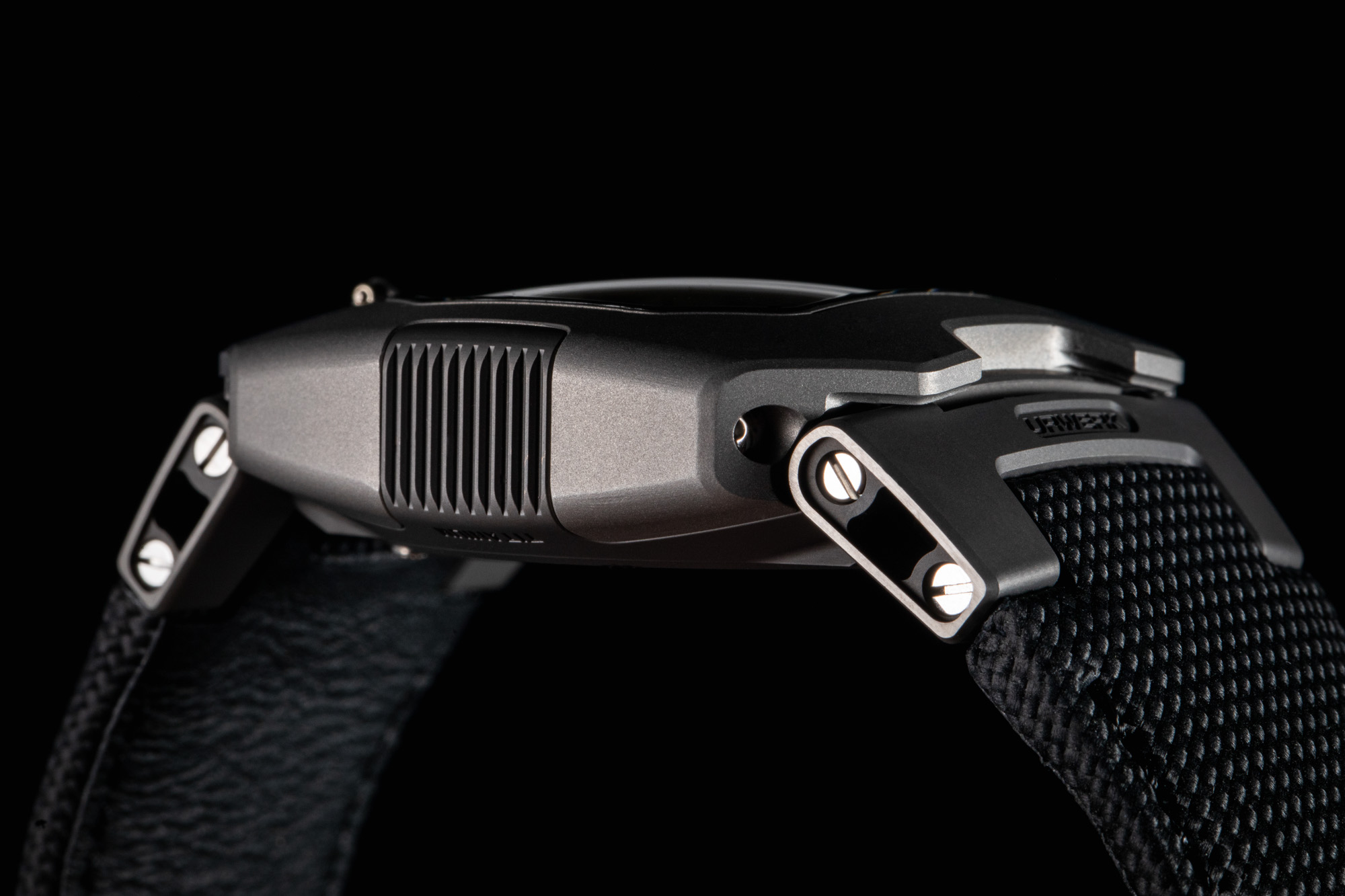 Like most of Urwerk’s watches, there really isn’t a “dial” in the traditional sense of the word, as the UR-120 Spock watch’s redesigned satellite system sits front and center within the case, offering a three-dimensional and highly mechanical overall aesthetic. Featuring a largely monochromatic gray profile with small pops of white, gold, and red, the display of the watch features the model’s signature three-armed satellite system, with a vertical arc-shaped minutes scale mounted within the protruding section on the right-hand side of the case. Mounted within 24k gold PVD treated lyre-shaped springs, each of the three orbiting satellites is formed by two rotating blocks that rotate on their own independent axis and split apart in a V shape as a reference to the famous “Live Long and Prosper” hand signal. The current time is displayed by the right-side-up satellite located on the right-hand side of the watch, which is formed by the two rotating blocks as they come together to display a numeral reading of the hours. The accompanying minutes for the time are represented by the corresponding position of the satellite’s indicator against the fixed minute scale on the right-hand side of the display. The 60-minute marking for the scale is bright red, but the rest of the markings on the three satellites and minute scale are white and luminous, emitting a bright blue glowing display in the dark. 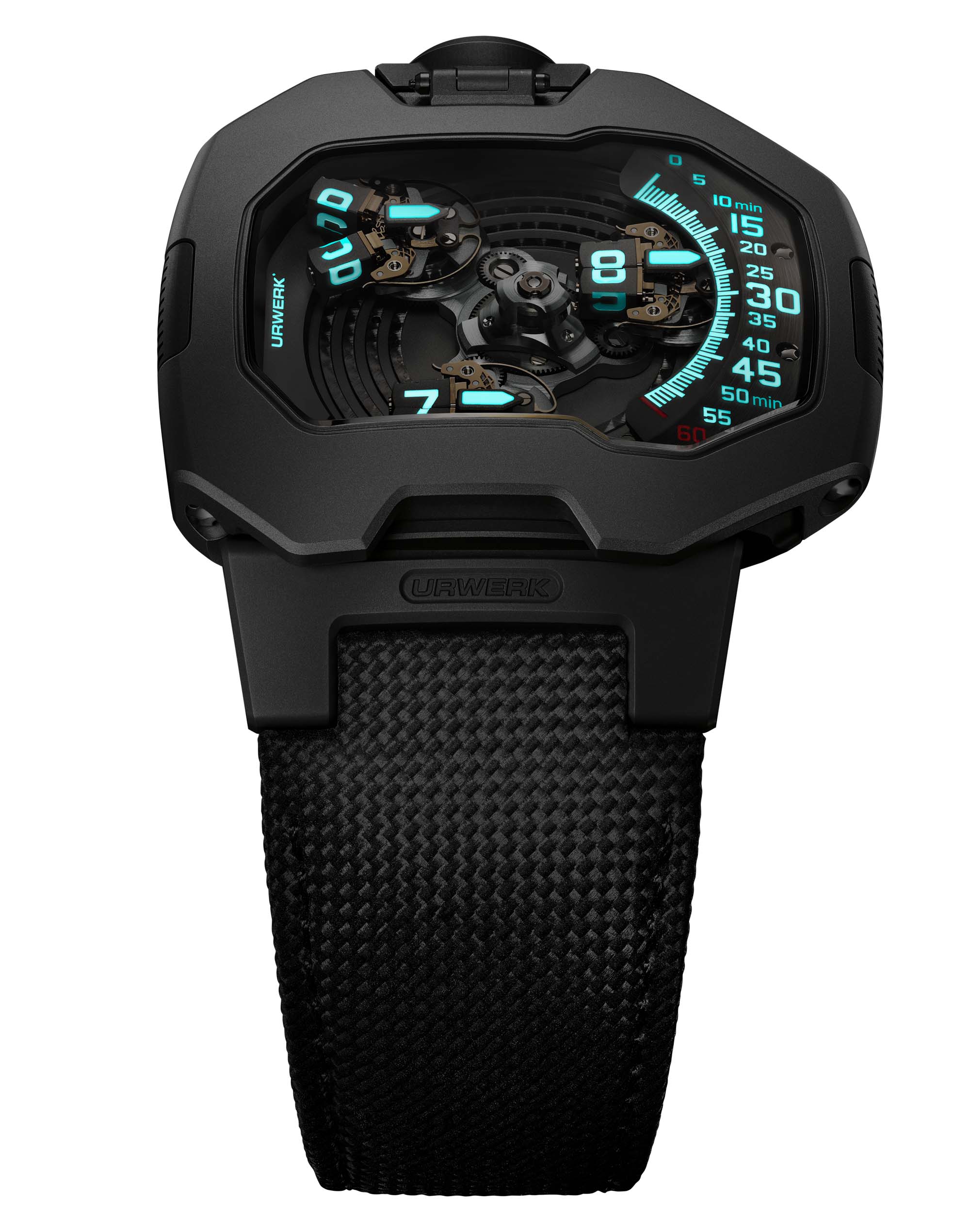 Powering the Urwerk UR-120 AKA Spock watch is the brand’s UR-20.01 self-winding movement, which is still based upon a traditional Swiss lever escapement and runs at a frequency of 28,800vph (4 Hz) with a power reserve of 48 hours, despite its highly unconventional satellite display. While the view of the movement through the small caseback window is limited to just Urwerk’s unique automatic winding mechanism, the dial side of the watch and the highly dynamic satellite offers plenty of visual intrigue for the mechanically inclined, in addition to the unique way that the individual satellites split apart to mirror the shape of the Vulcan salute hand gesture when they not displaying the current time. When it comes to finishing, the Urwerk UR-20.01 movement powering the UR-120 Spock watch features a number of modern materials including beryllium-copper, various different PVD treatments, ARCAP, titanium, and LIGA-processed nickel; however, it also features a number of traditional watchmaking finishing techniques on both its visible and non-visible components, including circular and straight graining, polished screws, sandblasting, and Geneva stripes. While the core function of the Urwerk UR-20.01 movement may be similar to other designs from the brand and may even appear rather similar at a quick glance, the unique way that the satellites split apart required a significant redesign of their core functionality, and ultimately resulted in the Urwerk UR-120 Spock watch having its own unique design. 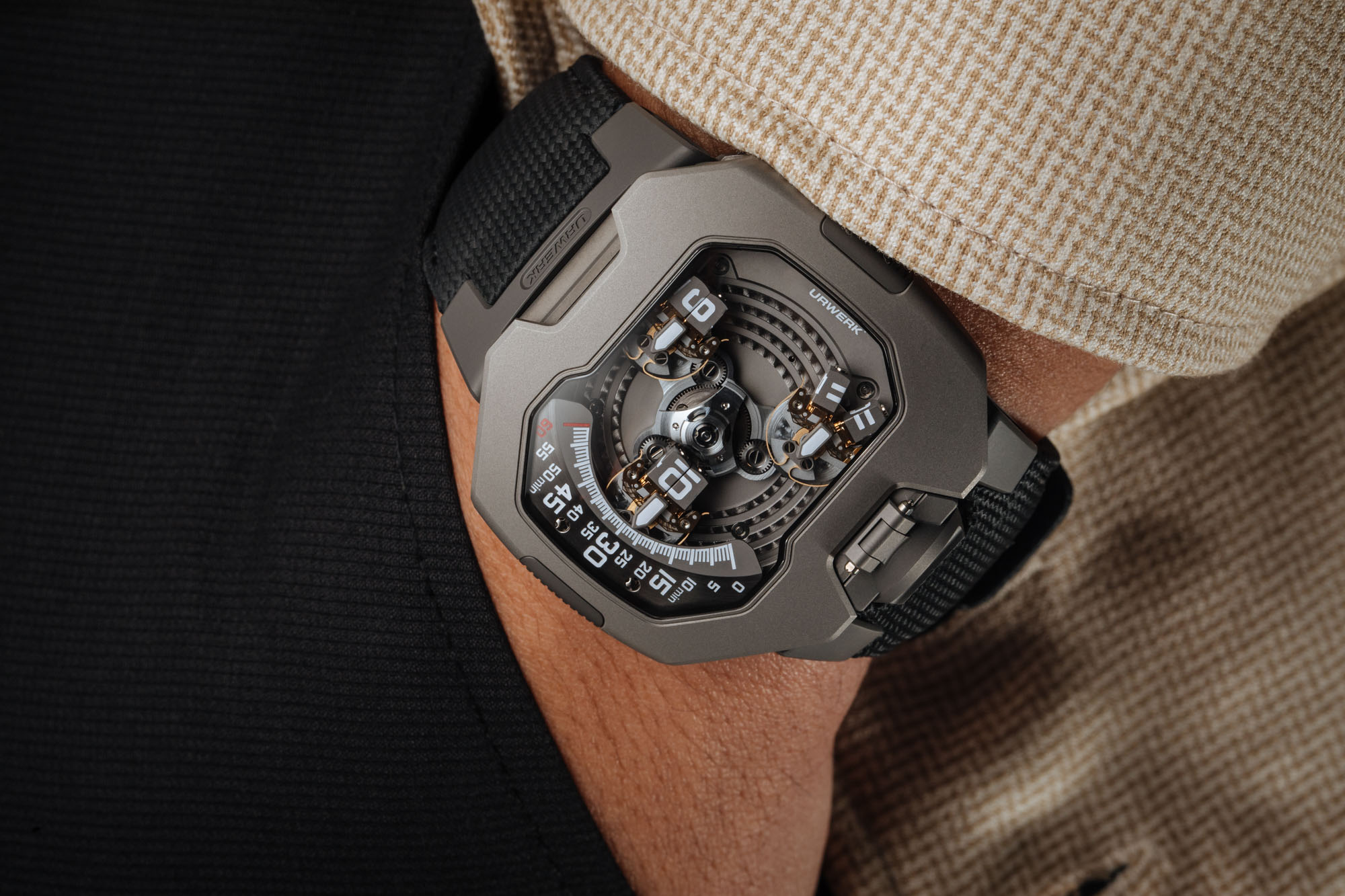 As a brand that was founded in 1997, Urwerk is a modern brand that produces thoroughly contemporary timepieces, rather than classically inspired watches like some of the various other Swiss luxury companies that have existed for multiple centuries. That said, Urwerk embodies a modern approach to traditional mechanical timekeeping technology, and while the watches themselves look like something directly out of a space-themed movie, the underlying technology behind them unites the brand’s creations with the rich traditions of an industry that date all the way back to the earliest days of human timekeeping. With an official retail price of $108,000 USD, the Urwerk UR-120 Spock watch is far from being anything that could even remotely be considered affordable, although it should be noted that it is also hardly the brand’s most expensive offering, despite the dynamic way that the satellites split apart in a V shape to mirror the Vulcan salute. The Urwerk UR-120 AKA Spock watch will not be limited in production to a specific number, although it will be a limited production model simply due to the natural production limitations of the company and its output capacity. For more information, please visit the brand’s website.