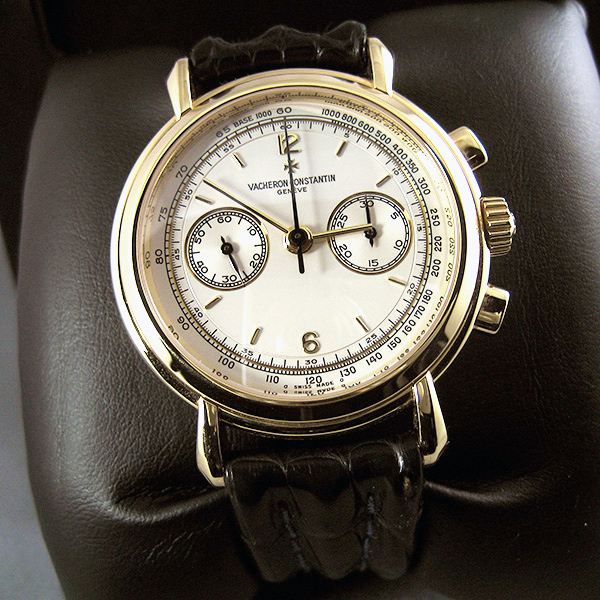 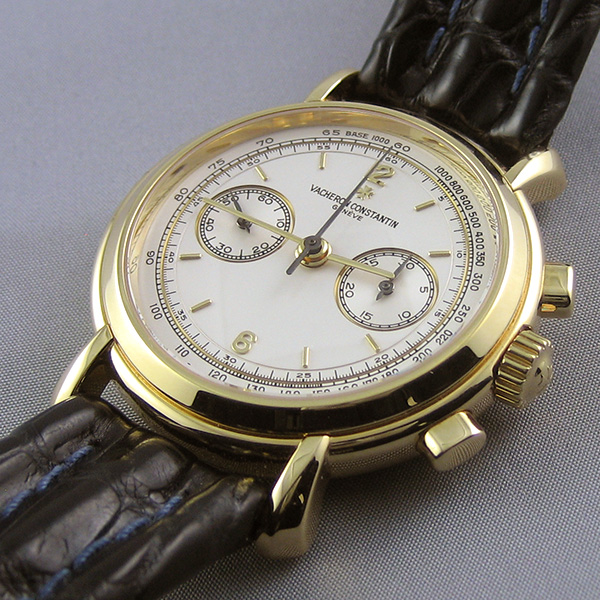 The hand-wound dress chronograph is a watch aficionado’s watch: slim and unassuming, only those in the know can appreciate the mechanical city that lurks within. The finest hand-wound chronographs are powered by intricate mechanical movements that offer plenty of eye candy when they are not hidden behind a solid caseback. Most of the upper echelon Swiss and German brands offer hand-wound dress chronographs in their current model lines, but these brand new pieces typically retail north of the 40,000 USD price point – an unattainable luxury for most.

Those looking for a (slightly) more affordable alternative should consider the second-hand market, more specifically models from the prestige brands that are out-of-production, but less than 20 years old. Examples with market values that fall in the 7,500 to 20,000 USD price range include the Ulysse Nardin 175th Anniversary Monopoussoir, the Roger Dubuis Hommage Chronograph and the Vacheron Constantin Les Historiques Chronograph. The first two examples are quite rare, only occasionally appearing up for auction, but it is still not too difficult to source a Les Historiques Chronograph in excellent condition. Here, we take an in-depth look at the silver-dialed 18k yellow gold version of the Les Historiques Chronograph (Ref. 47101), by far the most commonly-available flavor of the five that were produced.

The Vacheron Constantin Les Historiques Chronograph, which was produced between approximately 1990 and 2003, pays homage to the Vacheron Constantin Ref. 4178 of the 1940s and 1950s. However, the homage is not a slaveless one; the modern iteration features an updated movement, a signed crown and twin sapphire crystals, features that were not in fashion (or invented) during the Ref. 4178’s heyday.

Upon first inspection, the eye is drawn to the elegant symmetry achieved by the bicompax layout of the subdials. Despite the presence of a full tachymeter scale and fine sub-second markings, the Les Historiques dial does not appear to be cluttered. While the black-and-gold color scheme certainly helps, the designers should be commended for the lack of superfluous printing in the lower half of the dial. The applied Arabic numerals and baton markers are tastefully done, but faceted edges would have provided some additional visual “oomph”. The warm silver dials are finished with a retro touch: the main dial is finished with a smooth glaze; while the subdials feature a circlage pattern (fine concentric circles) to improve legibility. The applied Maltese cross logo and fine gold edging that surrounds the subdials and index markings are indicative of a high-end watch. 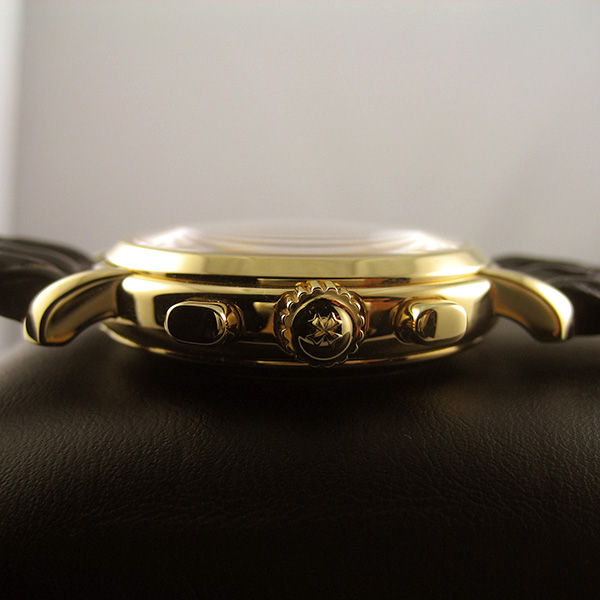 The gold baton hands that mark the passage of time are faithful to the era, but they lack the character of the leaf-shaped subdial hands. The minute hand suffers from a contentious case of Ariel Adam’s syndrome. While its tip does not quite reach the index markings, the thinly-engraved edge that borders its swept path of rotation ensures the time can be read to-the-minute without issue. Traditionalists may be disappointed that the tip of the chronograph seconds hand is not curved inwards towards the dial, but this nostalgic feature is unnecessary with the distortion-free sapphire crystal, which is gently curved.

The fully-polished case demonstrates Vacheron Constantin’s design prowess, both past and present. The tear drop lugs, popular throughout the 1950’s, are striking. Viewed from above, the lugs are perfectly proportioned, lending the watch a dose of retro character. While hardly used by today’s brands (Kari Voutilainen is a notable exception), I would like to see more brands incorporate shaped lugs into their dress watch designs, especially when they’re going for the retro look.

The remaining elements of the case are similarly aesthetically pleasing. When viewed from the side, the sloped bezel and the outer frame of the case back appear to form a sandwich with the main part of the case. This makes the watch appear slightly thinner and it also creates an attractive side profile. The lugs sit well above the flat bottom of the case, which has a small detrimental effect on the wrist profile when worn. The 37 mm diameter is considered small by contemporary standards, but the watch is well-proportioned. The case is 10.58 mm thick, making this one of the few mechanical chronographs that can comfortably fit under many shirt cuffs.

The ovoid pushers and ridged crown are nicely-crafted and correctly proportioned, with the latter featuring a relief of the VC Maltese cross. Compared to current production models, the quality of the relief work is slightly inferior and the snap on case back, while correct by tradition, is very simple. Les Historiques Chronographs produced in 2000 and later (designated as Ref 47111-1), feature a more elaborate case back that is secured by four screws, a non-retro design that appears higher in quality. The pool, shower and large puddles should be avoided when possible as the watch is only water-resistant to 30 meters (100 feet). 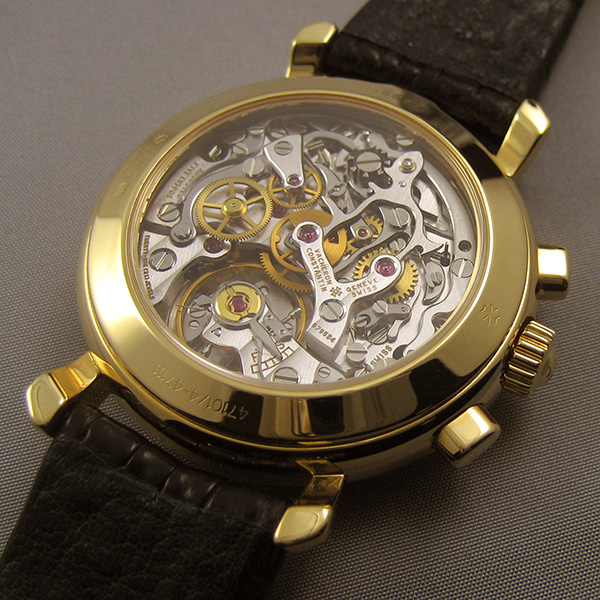 The Cal 1141, a lightly-modified Lemania 2320, is a movement befitting for a fine chronograph. Still used by Vacheron Constantin today, the Lemania 2320 is a descendent of the movement used in the first Omega Seamaster Professionals, the Omega Cal 321. While not an in-house movement by any stretch, the Lemania 2320 has been used by only a select group of brands: Breguet, Patek Philippe, Roger Dubuis, Vacheron Constantin and Ulysee Nardin. Classically structured with a column wheel and horizontal switching, the movement beats at a leisurely 18,000 v.p.h. (2.5 Hz). Traditionalists will appreciate that the Cal 1141 comes equipped with a Breguet overcoil and a finely-polished Swan’s neck regulator, while modernists will scoff at the absence of a proper seconds hack. The 48 hour power reserve is adequate, but not sufficient to keep the watch running if it is stuffed into a drawer and left unwound over the weekend. This particular example runs a bit fast, with an average gain of around 7 seconds per day. This is acceptable for a dress watch that does not pretend to be a chronometer. 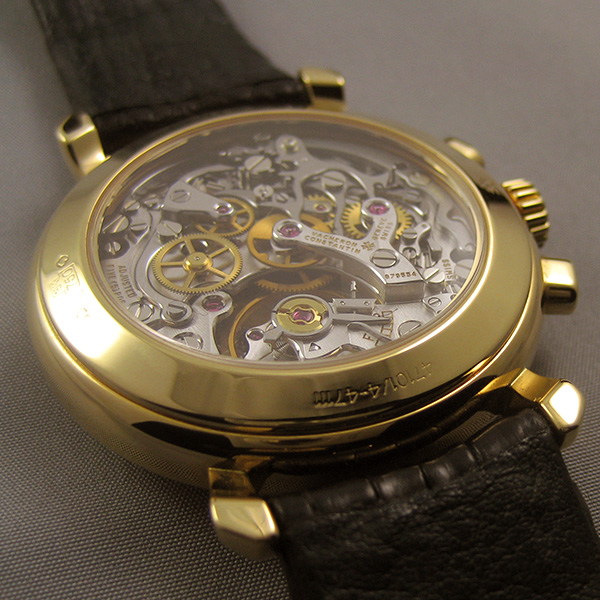 Movement finishing of the Cal 1141 is very good, but not extraordinary. The chronograph bridges are decorated with a tasteful Côtes de Genève finish, while the chronograph levers are brushed with a light satin finish. The baseplate, visible behind the screwed balance wheel, is finished with a fine perlage. The edges of the bridges, levers and screw slots have been beveled and polished, but there are no sharp internal or external edges – the hallmarks of an exceptional movement finish. While not the technical equal of Patek Philippe’s Cal. CH 27-70, the Cal. 1141 is an excellent movement in its own right.  Although maintenance costs are high, the Lemania 2320 has a reputation for being a reliable movement. Good reliability might be expected when one’s direct predecessor survived many trips to the moon. 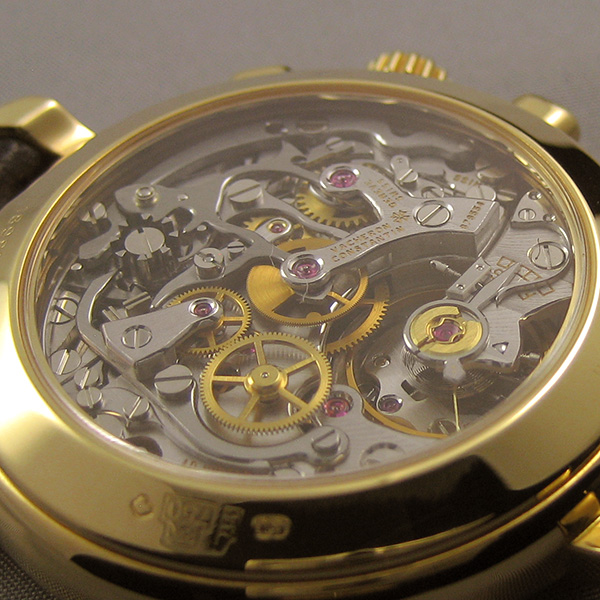 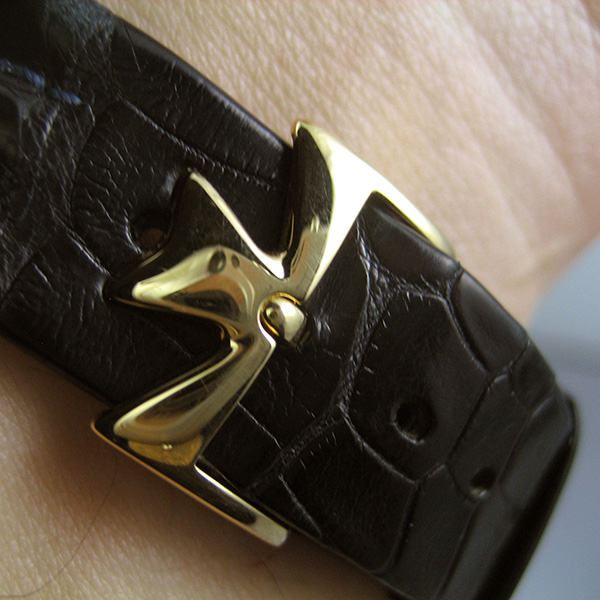 Operating the watch is a simple task, as the crown has only two positions: winding and time-setting. The lack of a date mechanism renders the watch nearly idiot-proof (over-winding is still possible). Audible clicks can be heard when the crown is turned to wind the watch and the winding resistance is close to ideal; as is the amount of effort required to operate the two chronograph buttons. Pusher feel is fairly crisp, but not buttery-smooth like the class-leading Lange Datograph.

Since the Les Historiques Chronograph is out-of-production, most examples found in the marketplace will come on a replacement strap of some sort. If the original owner was fastidious and removed the stock strap before wearing it, as was the case with my watch, you’d note that the black matte alligator strap is well-crafted and the flattened tip lends it a formal appearance. The navy blue strap my watch currently sports, as seen in the snapshots, gives the watch a less formal look. Consider a brown strap if you are not currently rolling with the Watch Anish crowd.

The pin buckle is traditional, functional and well-crafted. The quarter-Maltese cross buckle features beautiful edging and curvature. The flat prong buckle is milled from a solid piece of gold, for what it’s worth. Those of you who are used to deployant clasps should take extra care while fastening and removing the watch.  If strongly preferred, deployant devotees can purchase a new yellow gold deployant from Vacheron Constantin at considerable cost (more than 3000 USD).

Despite its unfashionable diameter, the watch looks sharp on the wrist.  And thanks to these modest dimensions, the watch will fit comfortably on large and small wrists alike. Those who habitually remove their bulkier watches to use a keyboard may find that there is no need to do so with this slim watch. When viewed from the side, the strap can be seen to follow the wrist’s natural curvature, but the gap between the wrist and the bottom of the elevated lugs looks a bit awkward. 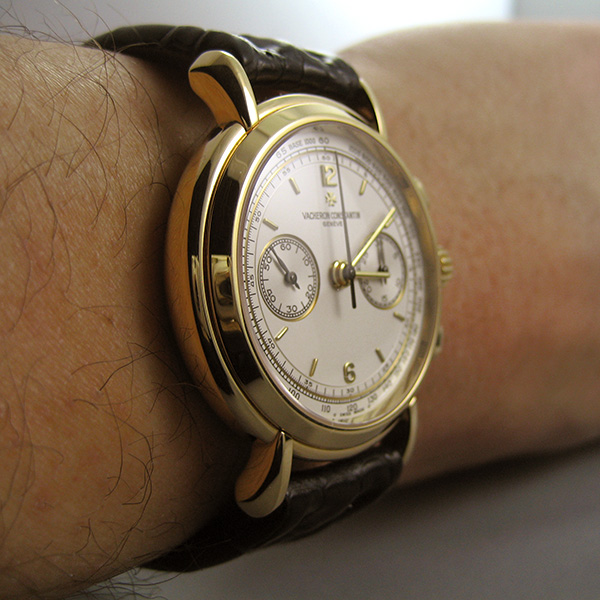 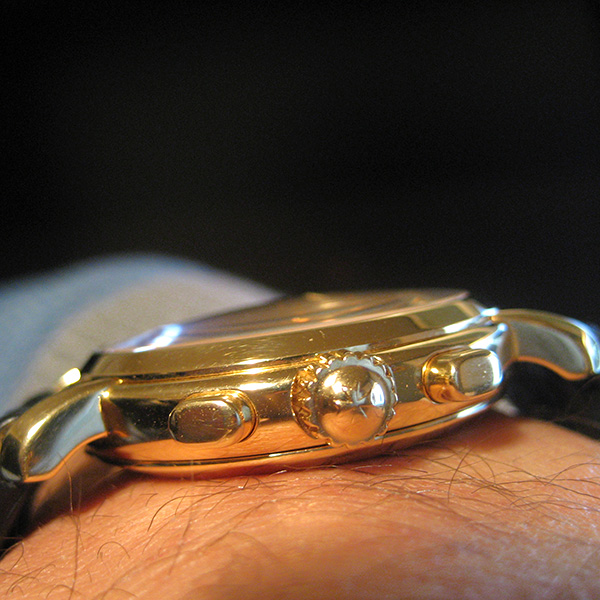 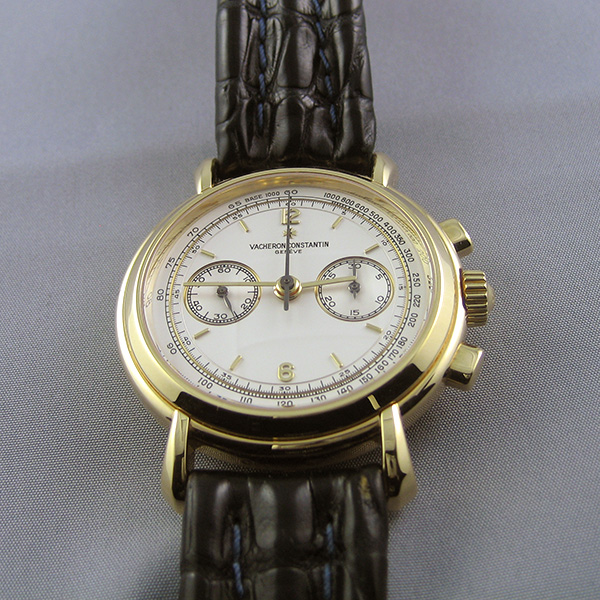 With a market price ranging between 10,000 USD to 16,000 USD (depending on condition and your negotiating skills) for the silver-dialed 18k yellow gold model, the Vacheron Constantin Les Historiques Chronograph delivers appreciable value. For this reason and its overall excellence, the watch has become well known to many collectors. The platinum and silver-dialed version will occasionally pop up at auctions, generally hammering for a bit less than 20,000 USD. The rarest variations, like the salmon guilloche-dialed Platinum piece, command prices upwards of 25,000 USD. When purchasing a used watch, make sure to enquire about its servicing history. In all likelihood, the watch will require maintenance and you will need to squirrel away an extra 1,500 USD to cover the costs.

The classic Lemania 2320 movement is a feast for the eyes, but it is the stunning retro case that makes this watch a pleasure to strap on, whenever a worthy occasion presents itself.  If you are willing to invest the time and funds, the Vacheron Constantin Les Historiques Chronograph will provide your wrist with stylish and substantial companionship for years to come. vacheron-constantin.com