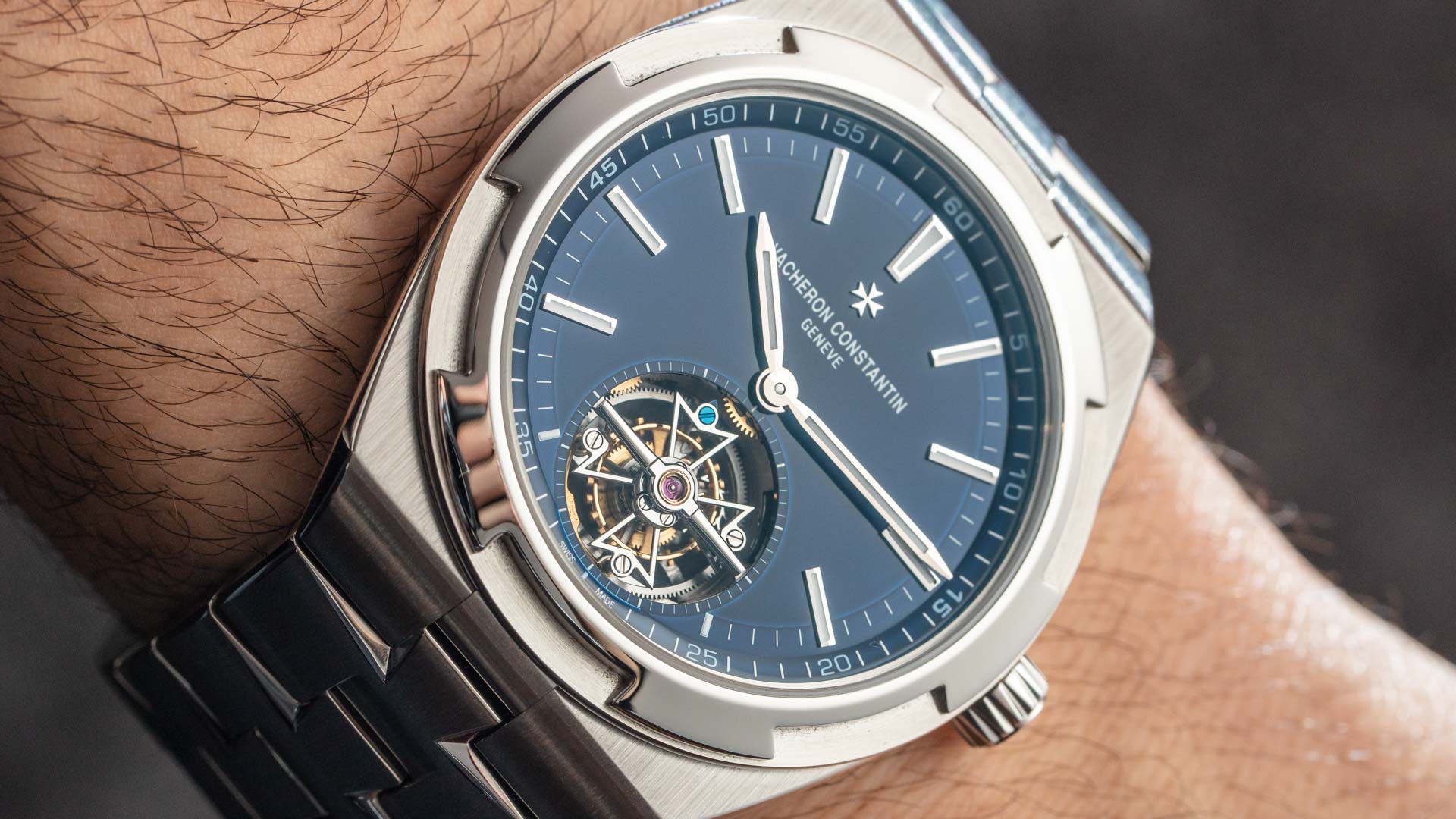 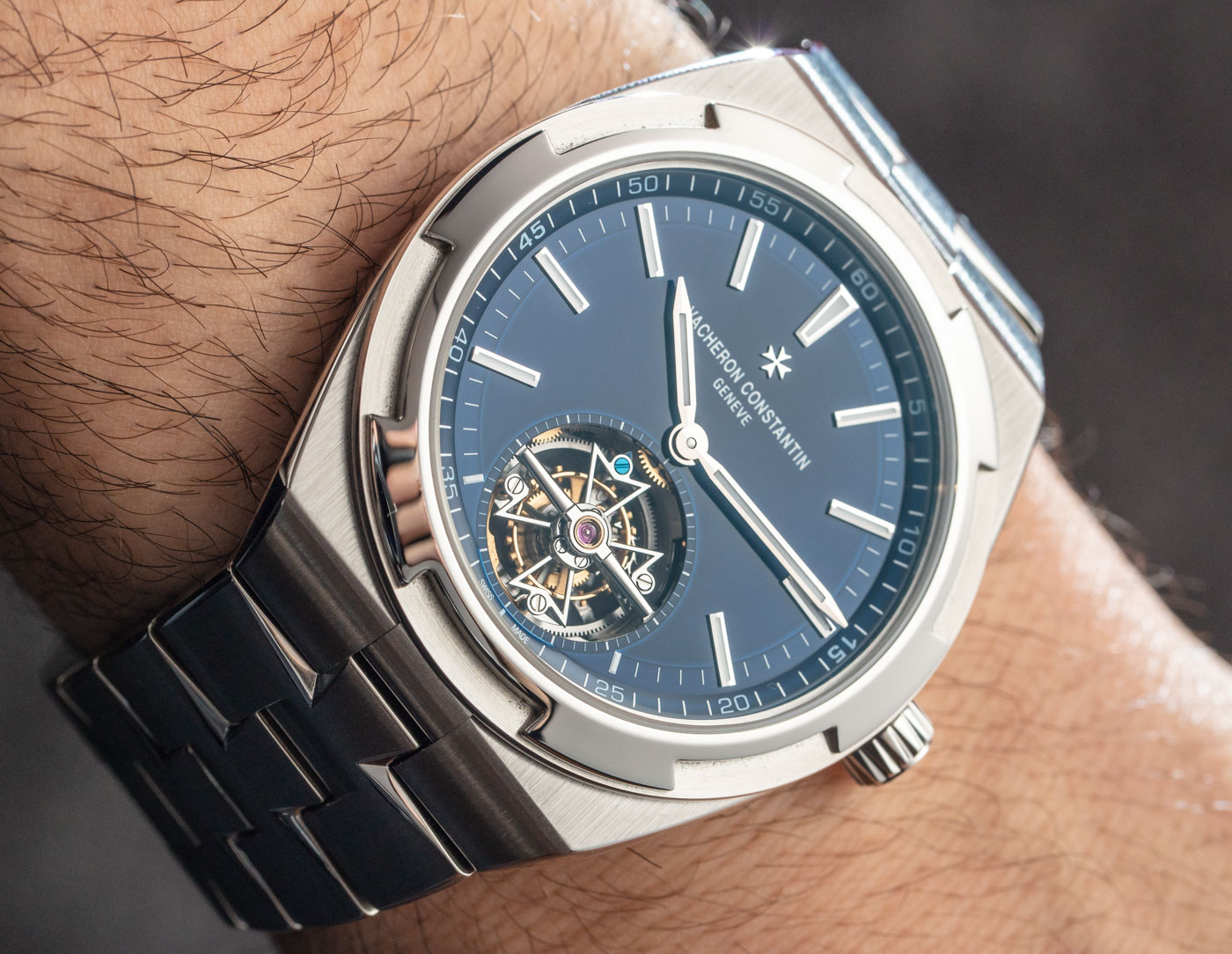 Vacheron Constantin does not produce many watches, with annual production numbers at somewhere between a half and a third of its closest two competitors. That said, I can’t claim to have an idea of how many pieces of the Overseas Tourbillon in stainless steel the brand will produce, but it’s safe to say a majority of watch collectors won’t even get the opportunity to see one, let alone debate the merits of its six-figure price tag. I’m personally a huge fan of the Overseas collection, as a whole, since it was refreshed back in 2016.

The Vacheron Constantin brand of steel sport watch isn’t a hypebeast like some others out there, but the Overseas Tourbillon in steel is, simply put, a GMO Peacock. Of course, it’s one whose tail feathers open in that historically, let’s say, complicated Maltese cross. Nothing personal against any readers who ride hard for the Knights Hospitaller. 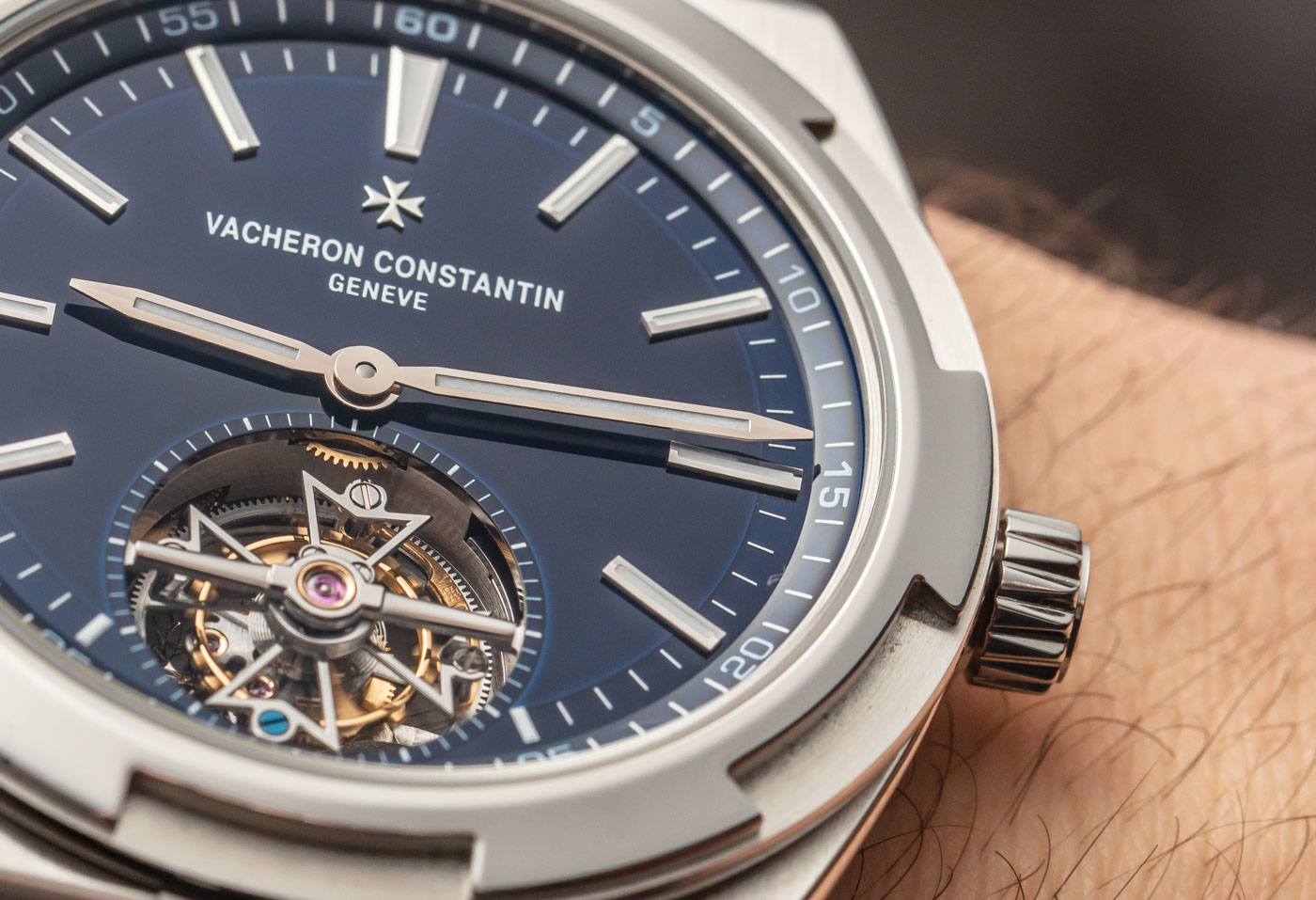 Obviously, Vacheron isn’t treading entirely new territory here, as Audemars Piguet has done a few variations of the Royal Oak Tourbillon with the most recent steel iteration coming just last year. Even so, there is a thoughtfulness and on-brand execution demonstrated by Vacheron, and it’s not just in the tourbillon design (Vacheron claims the hand-beveled bar on the tourbillon takes 12 hours to finish, alone), but also the quick-release mechanism that allows for a straight-from-the-manufacture steel VC tourbillon on a rubber strap. 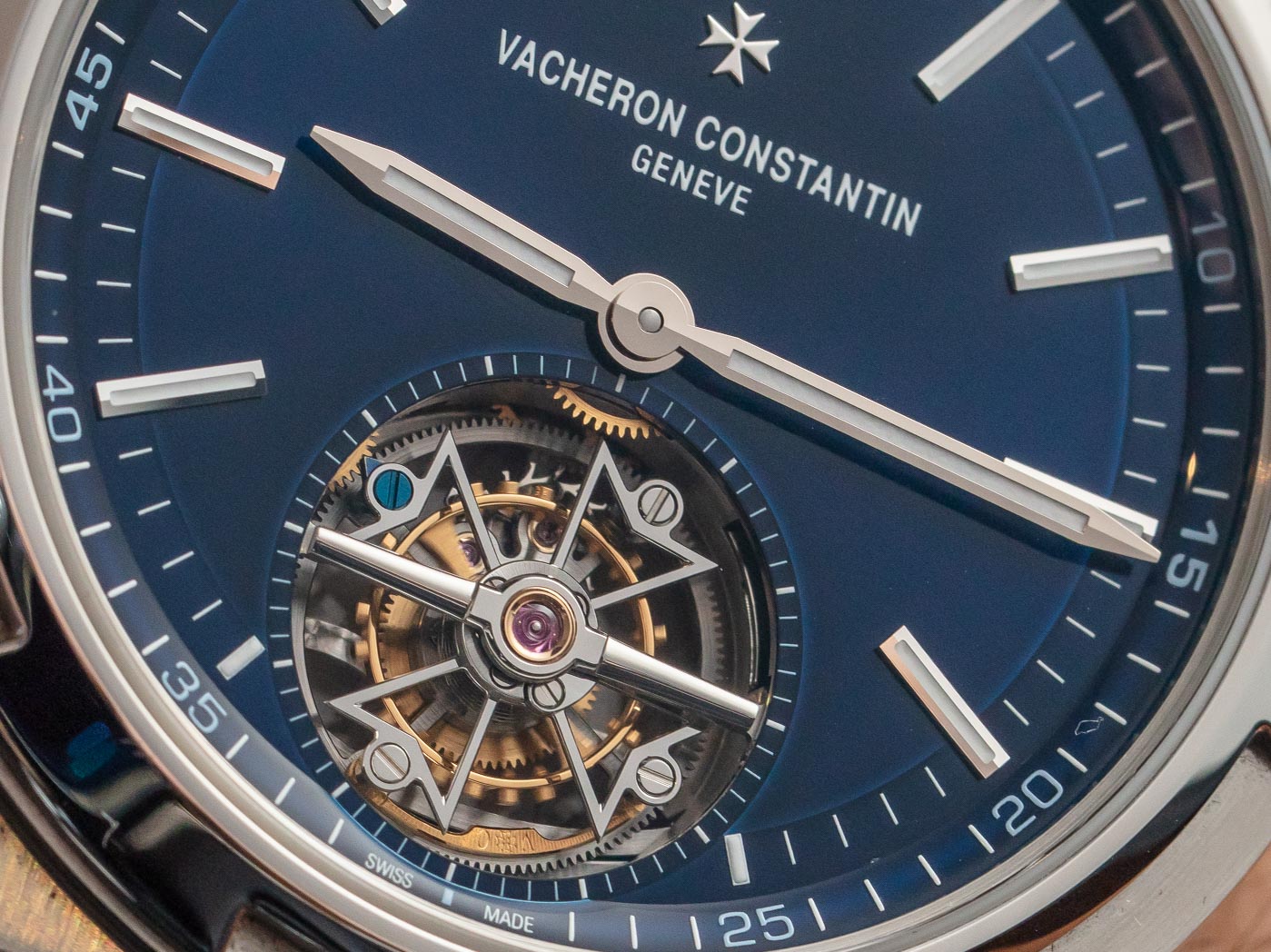 What’s striking about the Overseas Tourbillon (beyond the obvious) is how meticulously layered in construction the Maltese Cross-shaped tourbillon sits, housed in a case that measures just 10.39mm-thick. The slimness of the case, the blue dial, and the choice of steel all culminate in what feels like a splash of cool water on one’s face when considering the tourbillon. Once novel, the tourbillon has become something of a pre-recession dinosaur that one would place in Tom Wolfe’s “Bonfire of the Vanities.” The Overseas Tourbillon befuddled me at first, but now I’m simply ensorcelled by it. 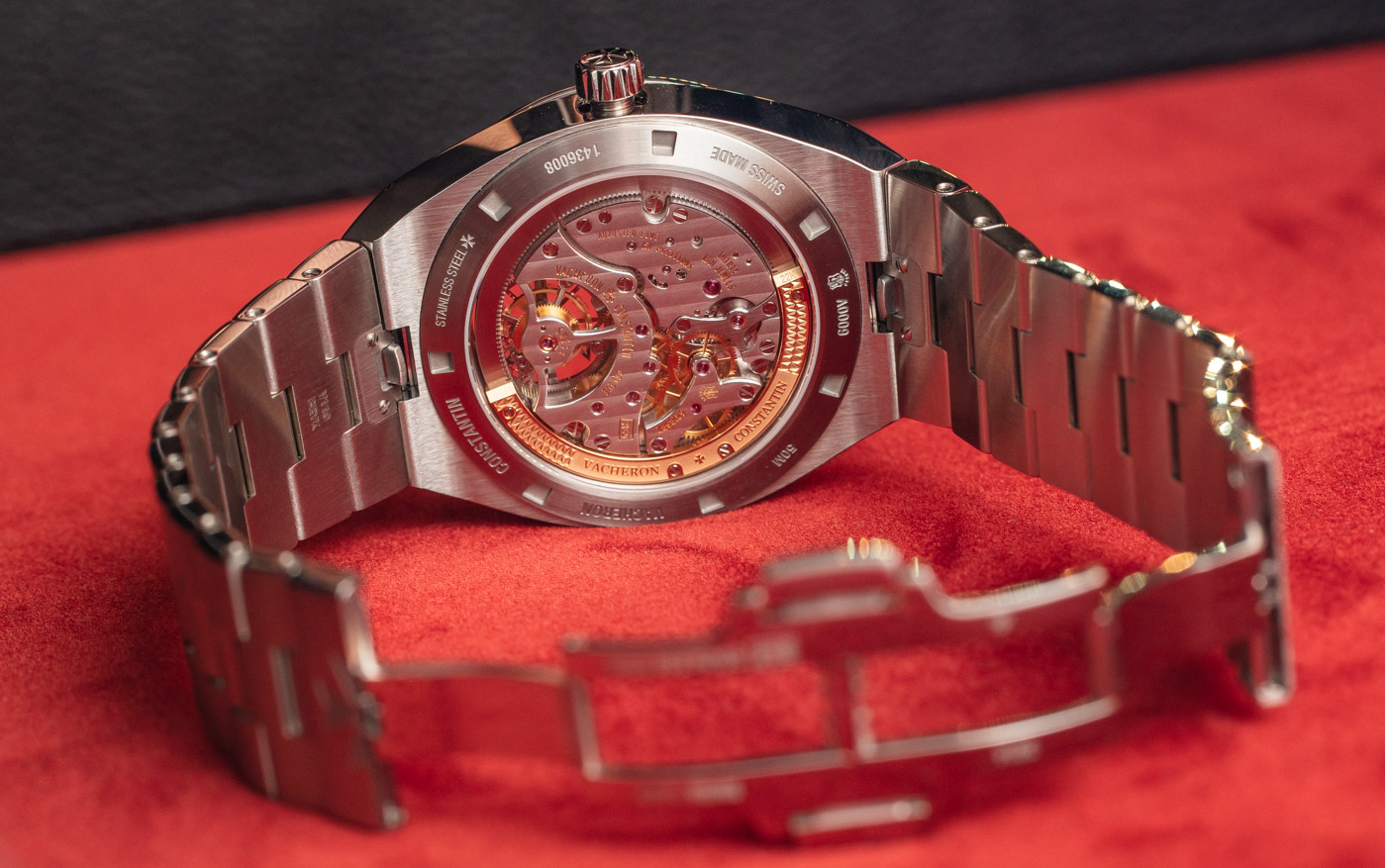 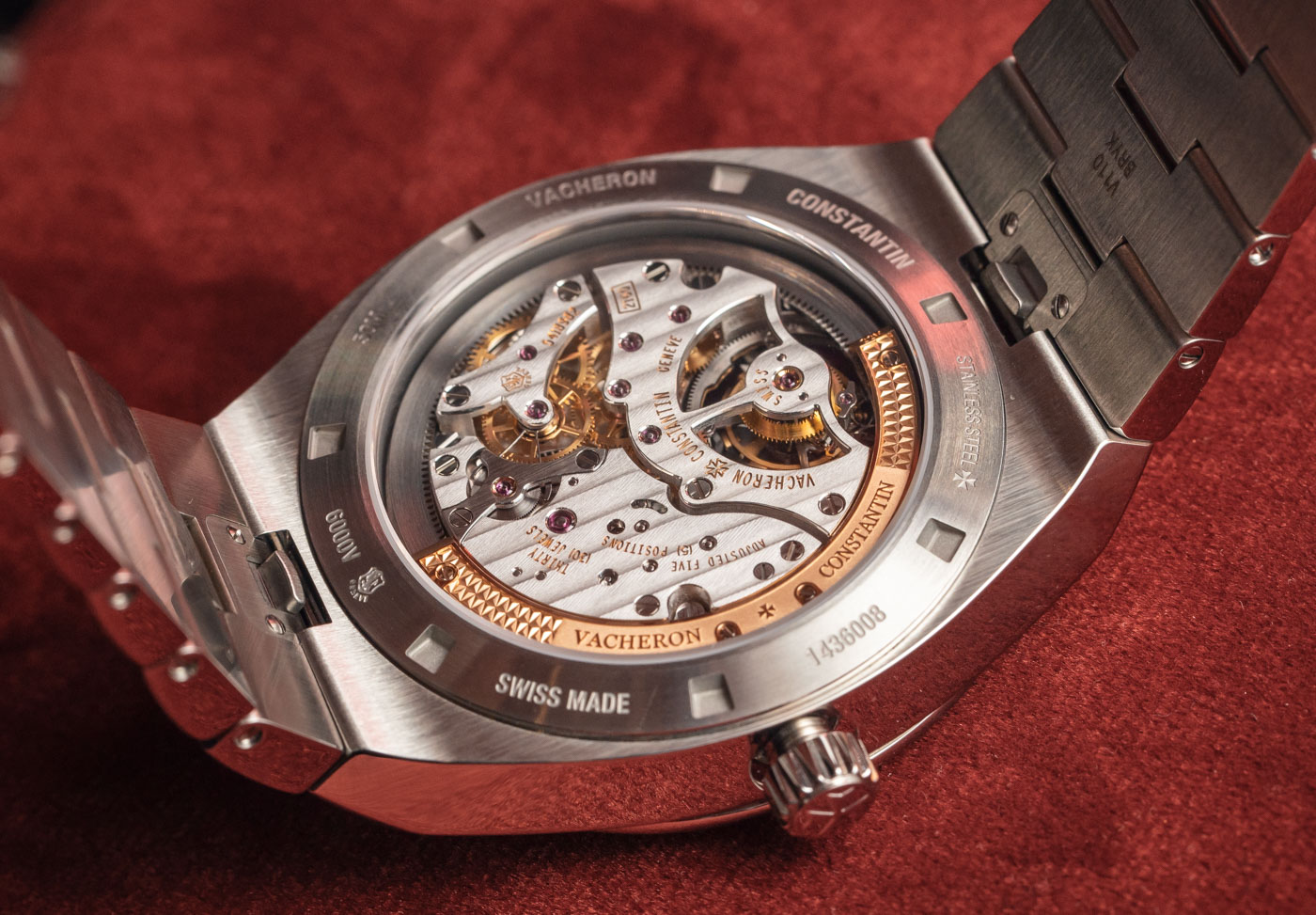 The Calibre 2160 movement was introduced a year ago, in 2018, debuting as a dress watch in the form of the Traditionelle Tourbillon 6000T. A minor aside: The fact that the steel Overseas Tourbillon retails for within ballpark price of the red gold or platinum Traditionelle Tourbillon 6000T demonstrates that Vacheron isn’t concerned much with winning over or convincing buyers of its value. Rather, the brand seems to primarily want to appeal to the existing VC collector. I doubt the most accurate guesses of Overseas Tourbillon production numbers will do anything to weaken this point. 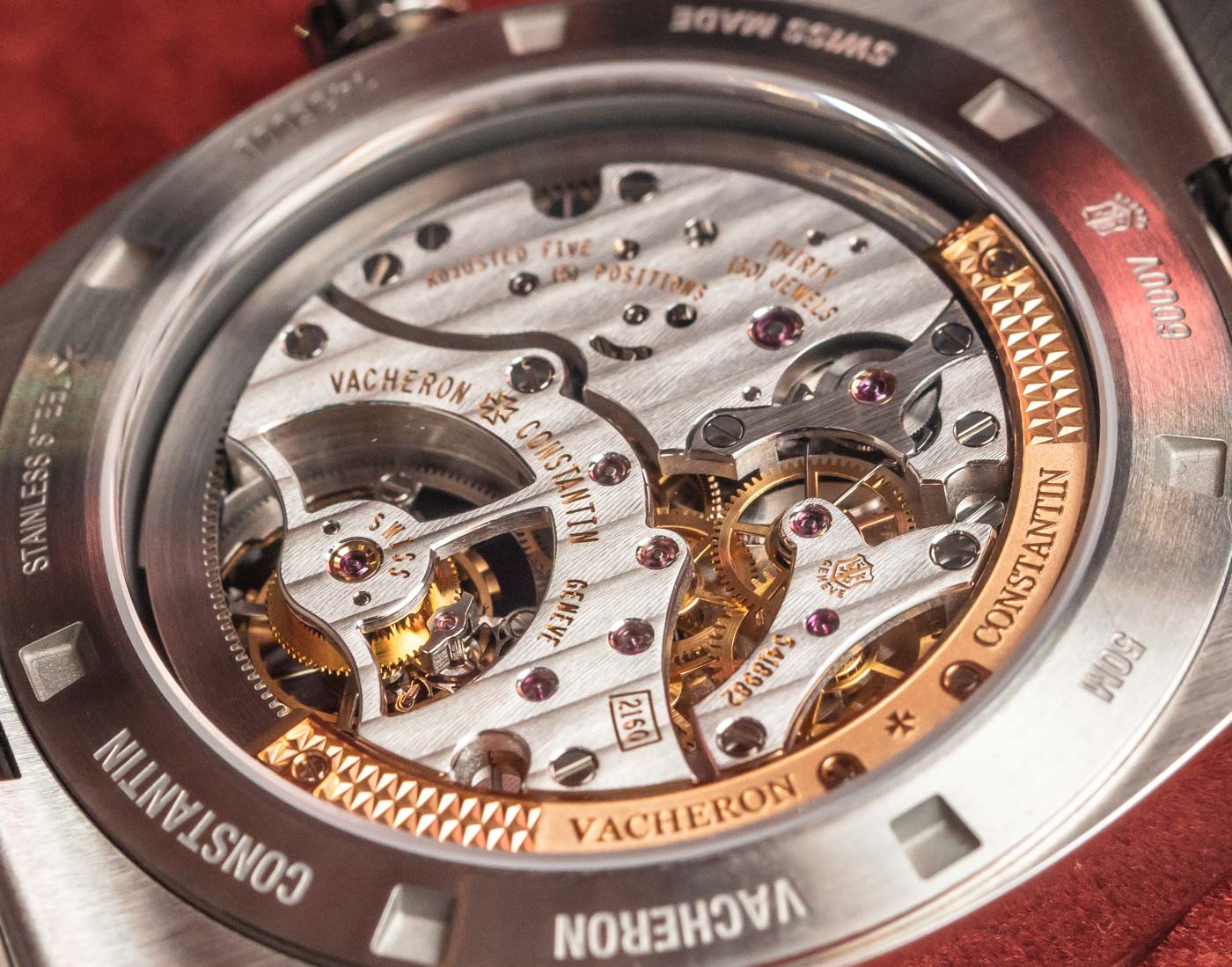 Beyond the tourbillon, turning the watch over reveals something else you don’t see in many other six-figure plus watches. The 22k gold peripheral rotor is unusual, but far from totally original. However, it’s got character and is admirable, not just in execution but deliberateness of purpose, as well, so as to never block the view of the tourbillon, while remaining mobile. 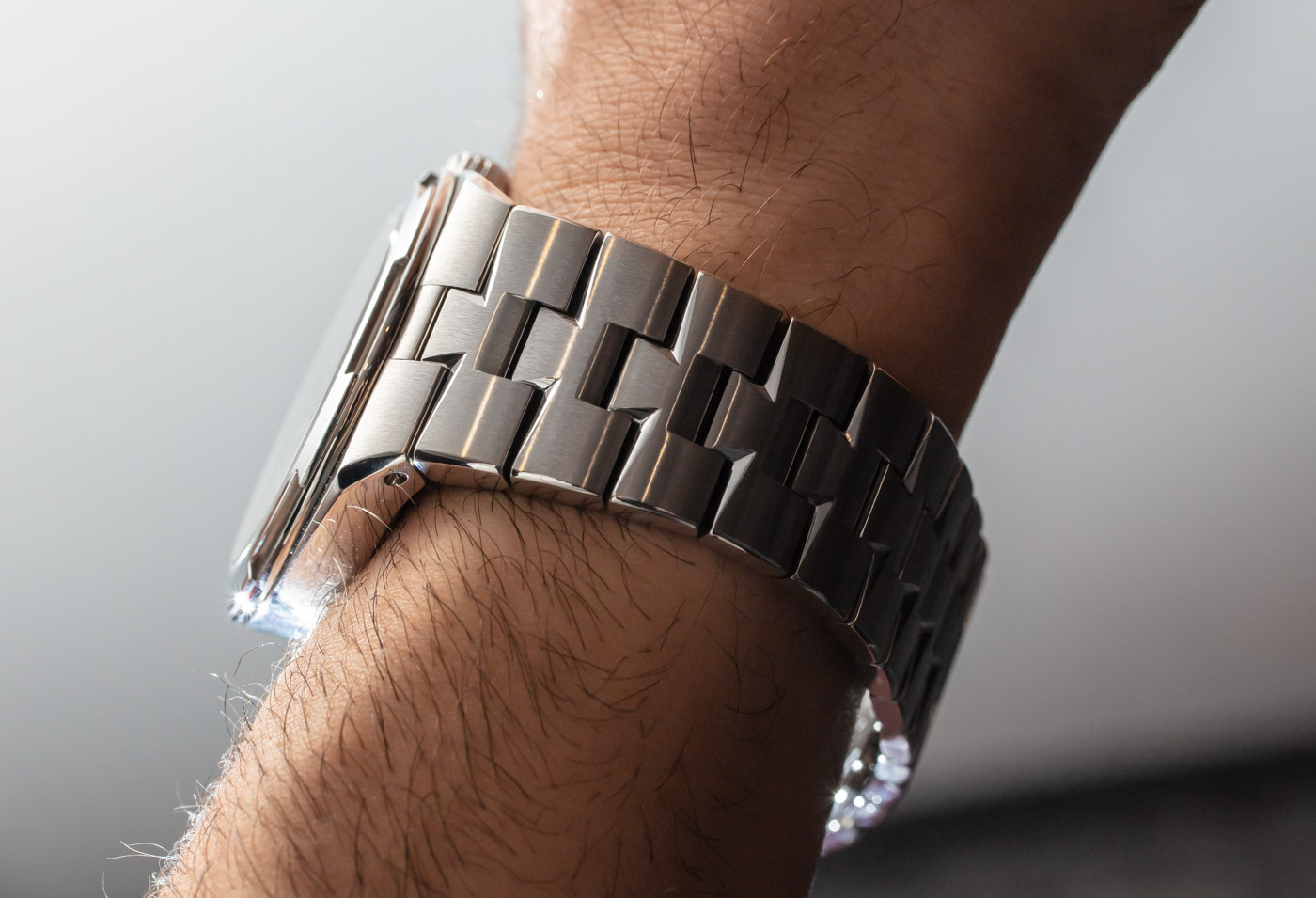 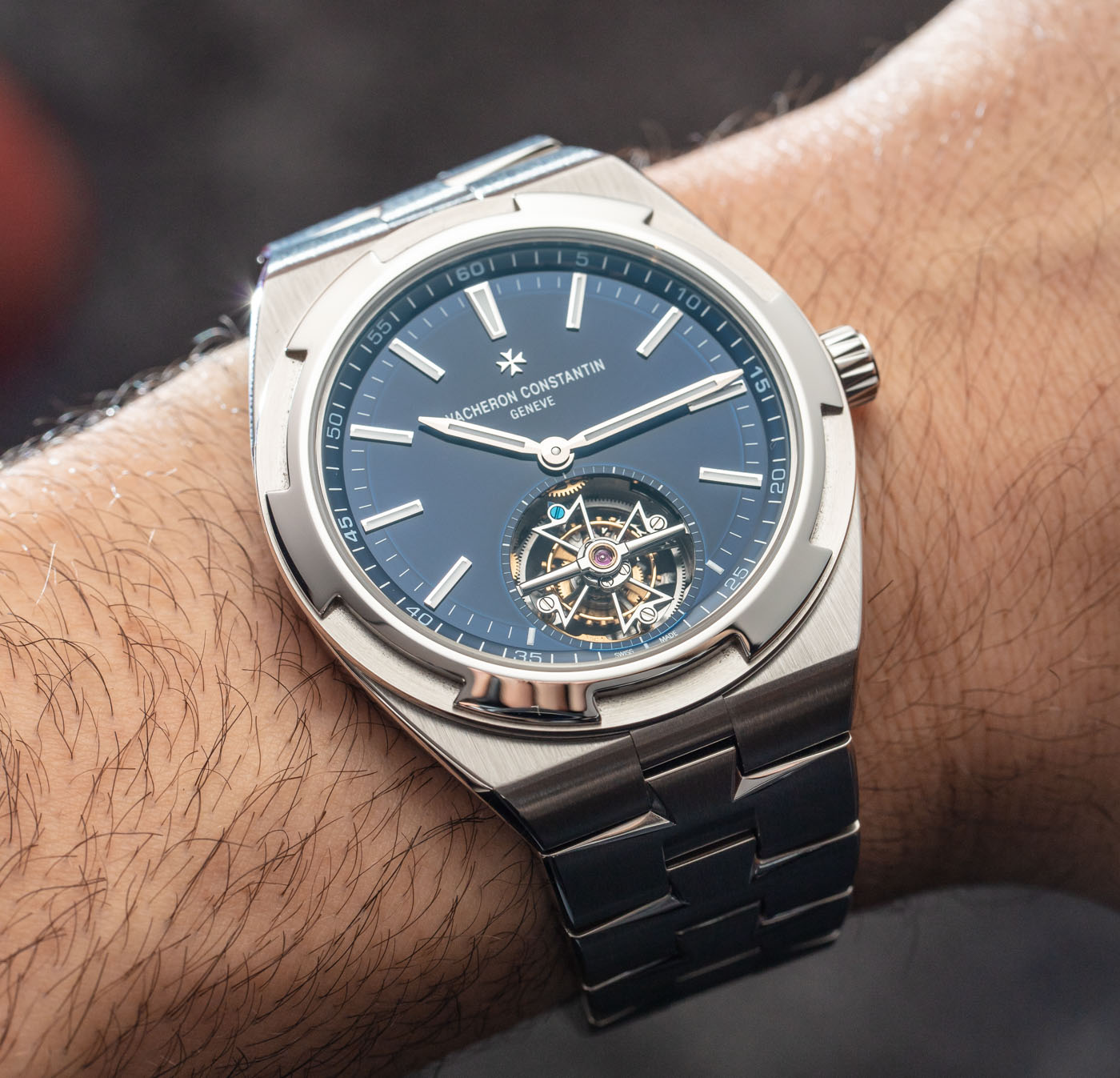 At 42.5mm-wide, the Overseas Tourbillon case is sized about the same as the Overseas Chronograph. This makes it larger than the 41mm three-hand model, but it’s not the biggest Overseas out there. I believe that distinction goes to the 43.5mm-wide Overseas World Time. If you’re interested in the practicality of this watch in terms of water resistance, it’s rated at 50M — which Vacheron Constantin would classify as just a few meters above “suitable for activities on the surface of the water.” 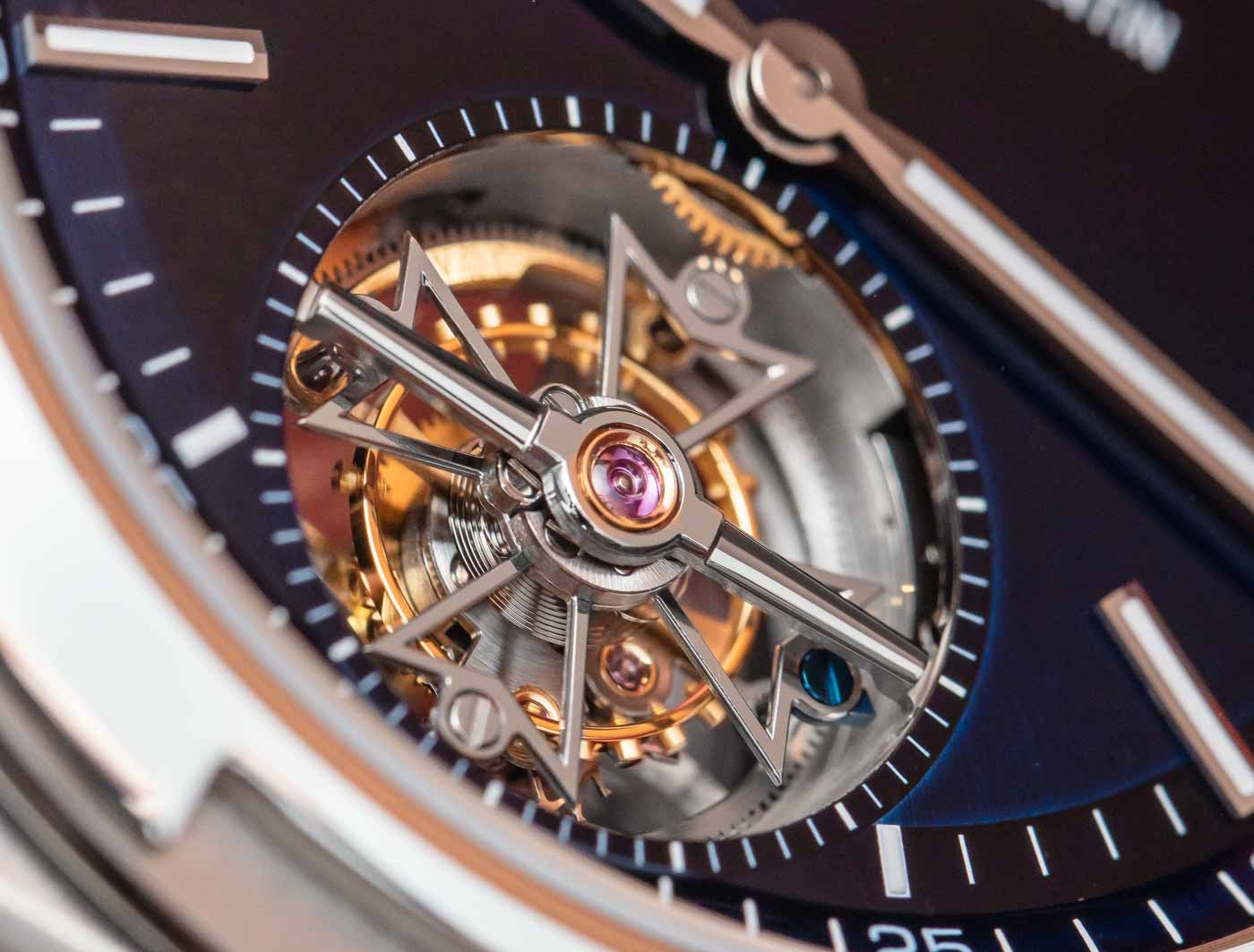 The Overseas collection comes in a wide variety of dial colors, including silver, black, chocolate brown, and the blue that carried over to this Tourbillon. The translucent blue-lacquered sunburst-satin-finished dial is marked by 18k white gold hands and hour markers, all done in white lume. The Vacheron Constantin Overseas Tourbillon comes with the uniquely designed steel half-Maltese Cross Overseas bracelet, a blue Mississippiensis alligator leather strap, and, my personal favorite of the bunch, a superlative-free blue rubber strap. Not limited in the “limited edition” sense, the Vacheron Constantin Overseas Tourbillon in steel is priced at $103,000. You can learn more at vacheron-constantin.com.