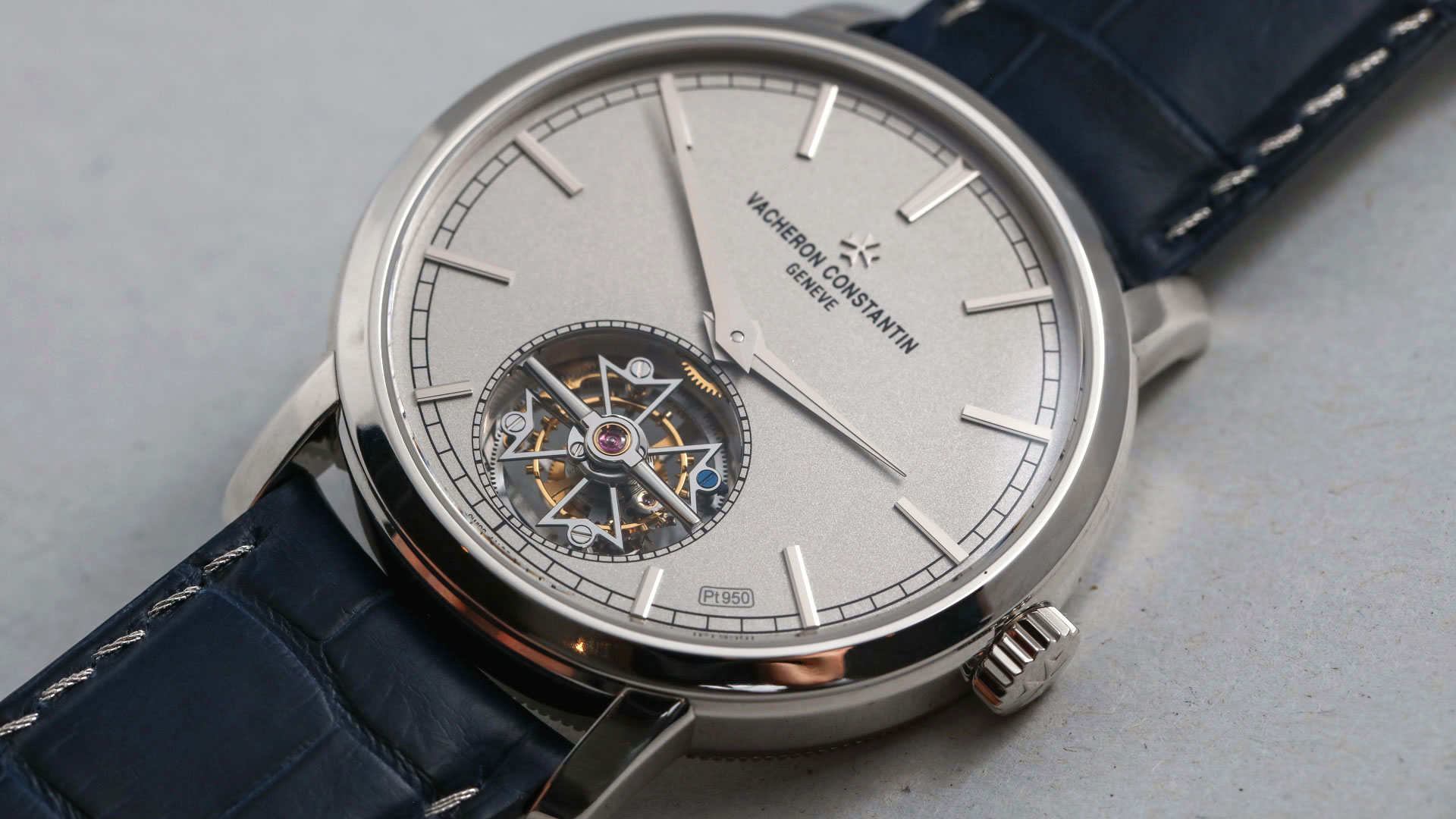 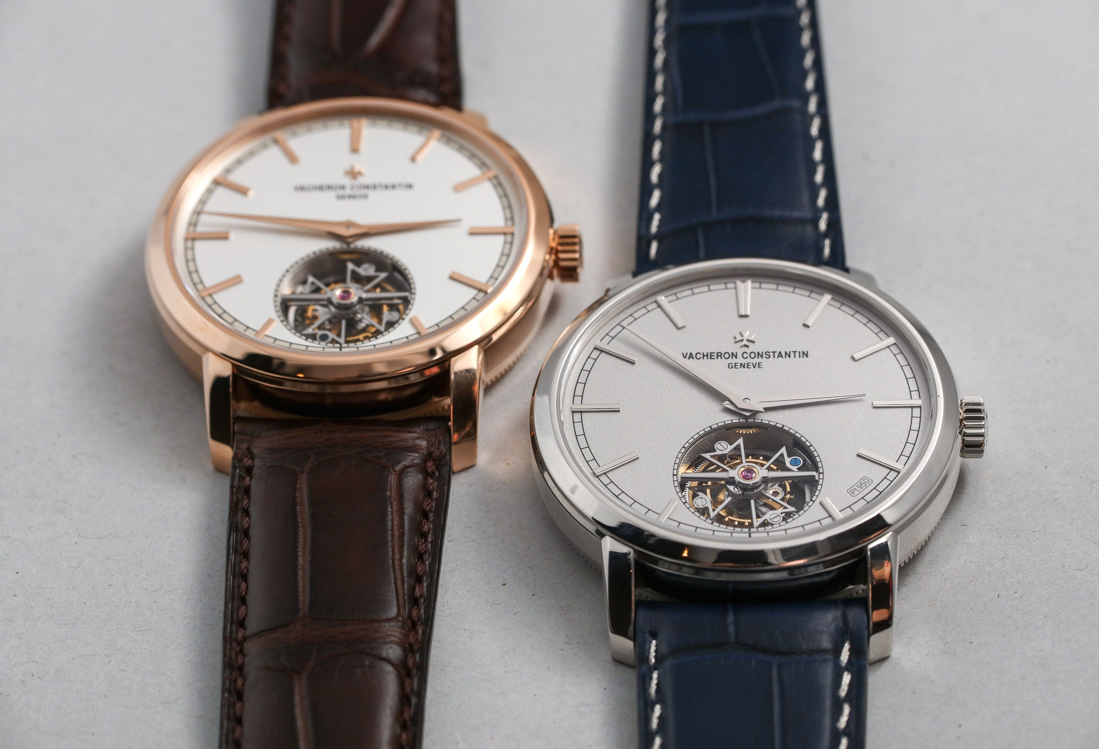 Some of my favorite new Vacheron Constantin watches for 2018 are these two Traditionnelle Tourbillons (in 18k pink gold or platinum) as references 6000T/000R-B346 and 6000T/000P-B347. The Vacheron Constantin Traditionnelle Tourbillon was also on our list of the top 10 watches of SIHH 2018. If there is anything that historic Swiss Vacheron Constantin does well (in addition to their art watches), it is producing very fine tourbillons. What makes a fine tourbillon in my opinion isn’t about reinventing the tourbillon wheel (that was a terrible quasi-pun) but rather executing it both attractively and with performance in mind. In other words, to make the tourbillon look pretty while providing timing accuracy. The reality of this little “whirlwind” system is that while it was originally designed to theoretically help make clock and pocket watch movements more accurate, in wristwatches a tourbillon can actually make a movement less accurate than one that uses a traditional regulation system. 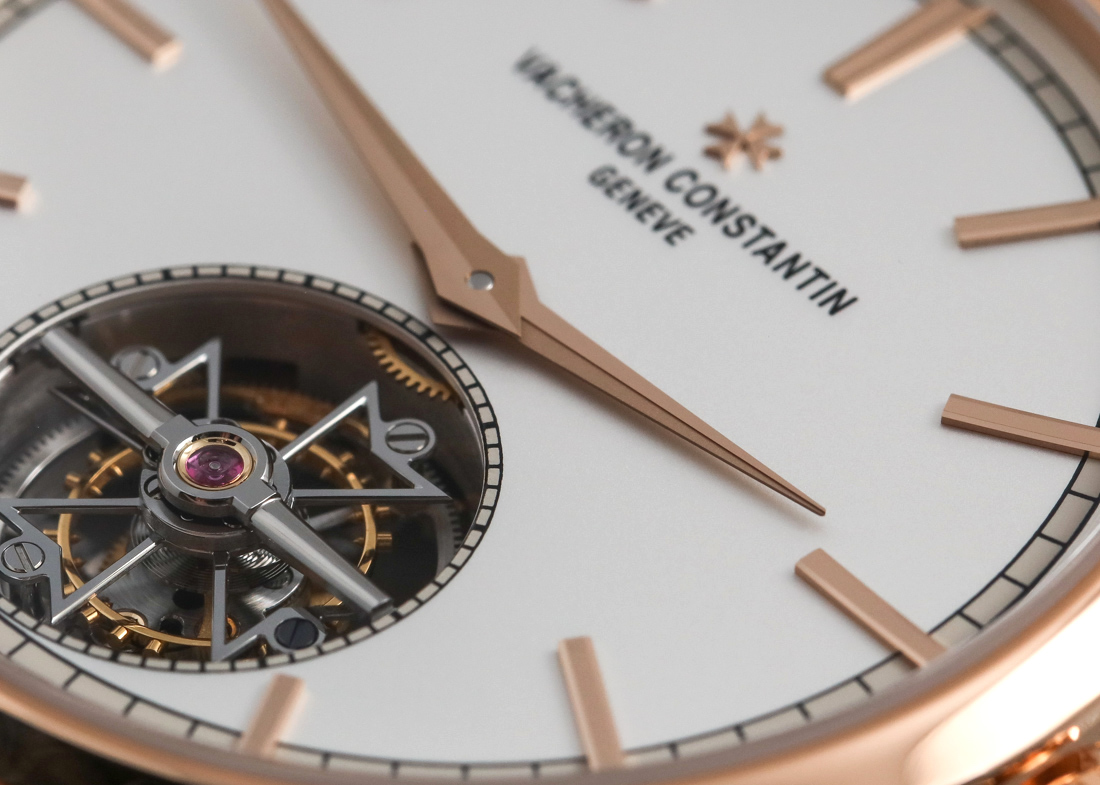 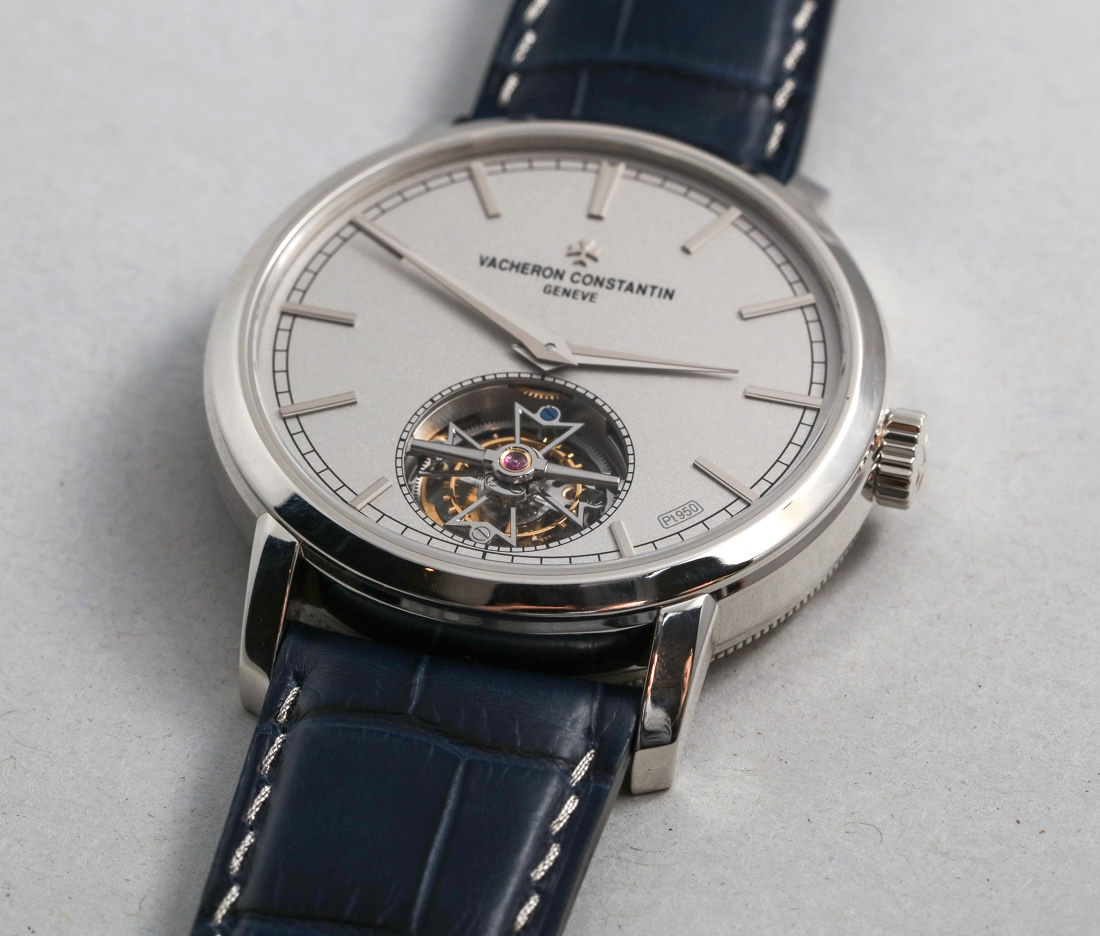 Among other things, Vacheron Constantin watches come with the prestigious Seal of Geneva, which is not merely a cosmetic label attached to a luxury watch to justify charging more for it. The Seal of Geneva is an indicator of provenance (produced within the Swiss Canton of Geneva), decoration (particular decoration techniques need to be applied), and more recently, performance. The Geneva Seal is applied per watch and is stamped on the movement. It isn’t everything, but it is a big step in the direction of being able to feel confident that your lovely new tourbillon will also serve you well as part of a dependable watch. 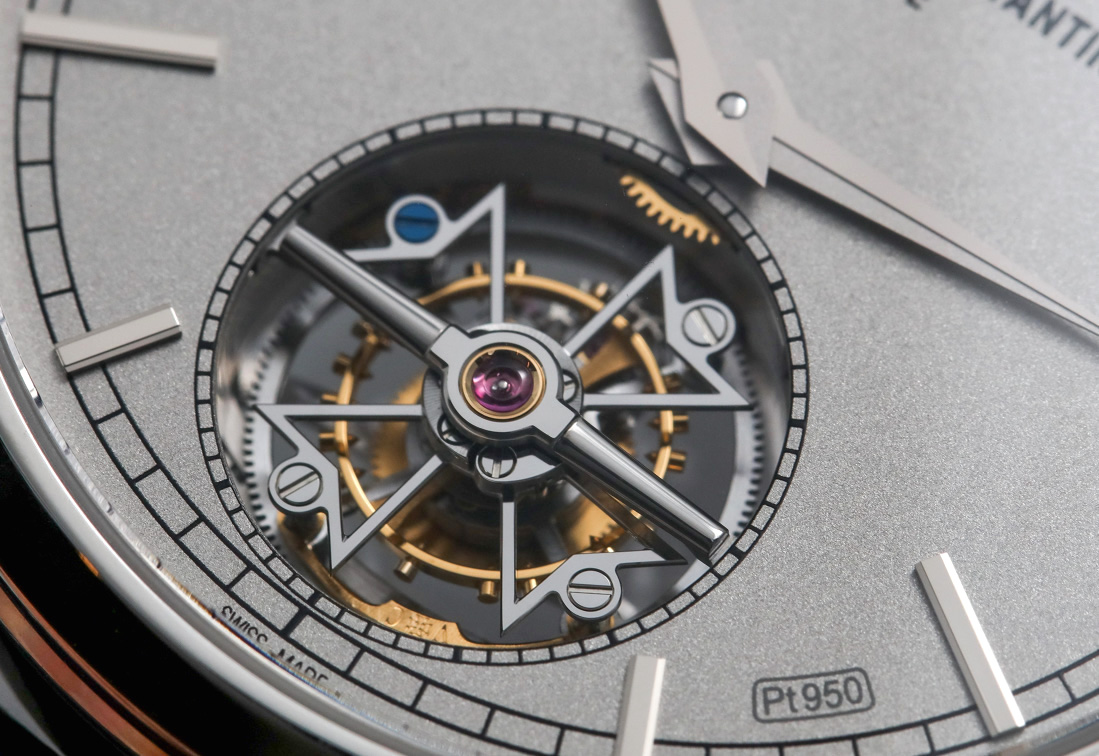 I for one never shy away from timepieces with mostly artistic merits, but I also like my timepieces to perform adequately as time tellers. I wouldn’t call the Vacheron Constantin Traditionnelle Tourbillon an “art watch” in the way other Vacheron Constantin timepieces might be, but the movement is slathered with loads of hand finishing and polishing and one can easily apply the term “beautiful” to the accumulation of all that artistic effort. 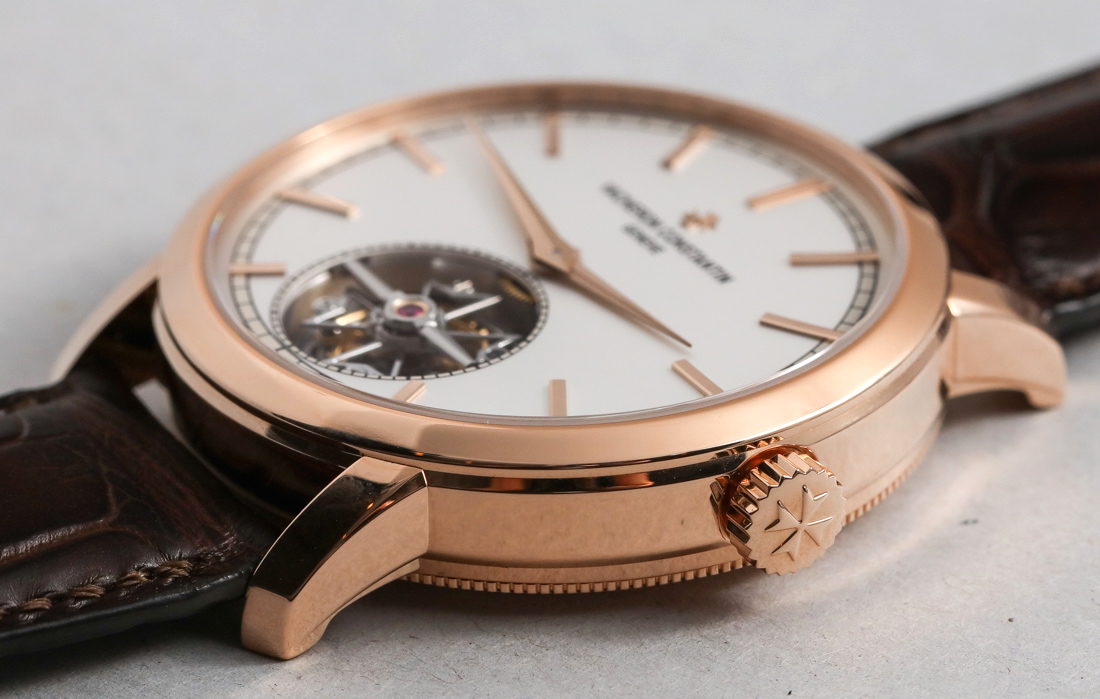 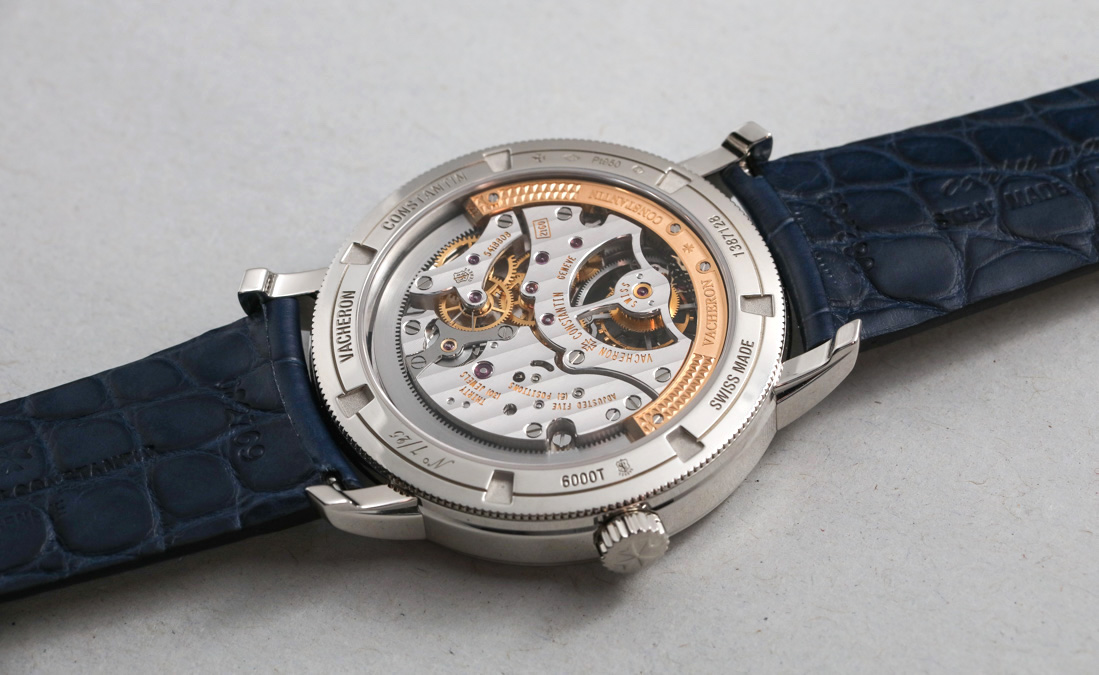 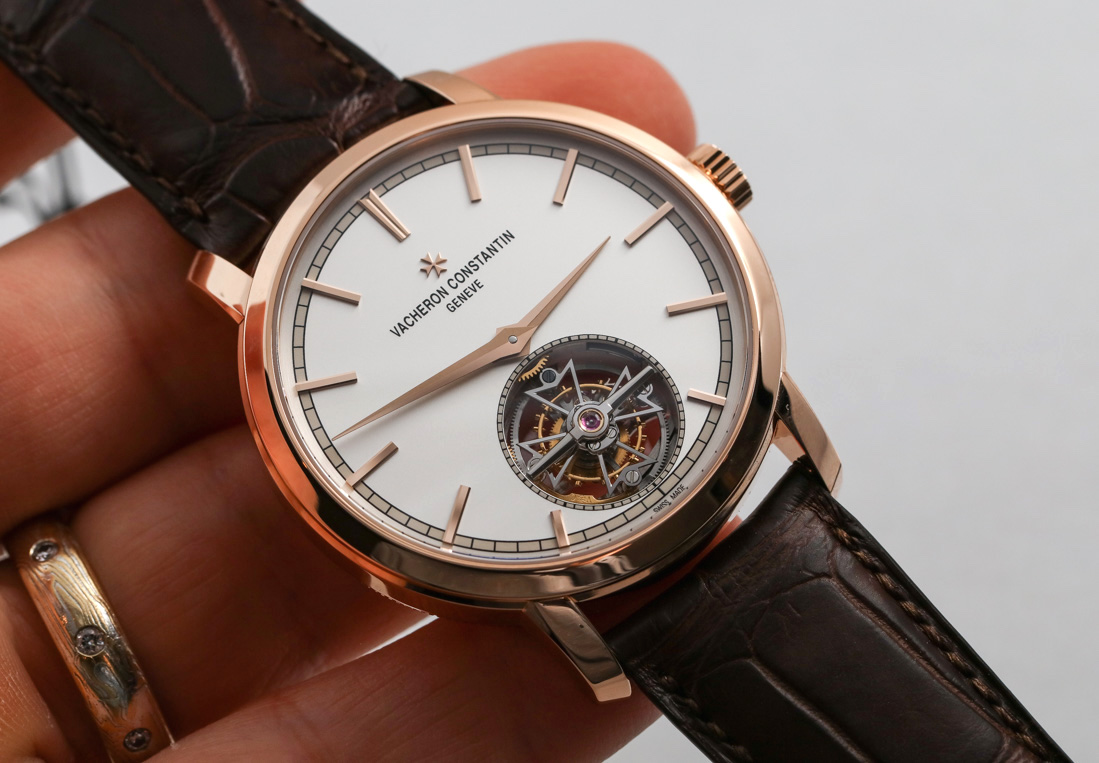 Each of these previous watches is technically lovely, but not as aesthetically refined in my opinion. One of my main issues in those watches is that the actual dial to tell the time is both smaller than the face of the watch and also off-centered, being skewed upwards a bit. Size wise, they were also bigger with the Traditionnelle 14-Day Tourbillon being 42mm wide and 12.2mm thick. The 2018 Traditionnelle Tourbillon has less power reserve, but is also an automatic. It also comes in a very well-proportioned 41mm wide case that is just 10.4mm thick. Wearability (in my opinion) favors the 2018 Vacheron Constantin Traditionnelle Tourbillon as compared to its existing sister models. 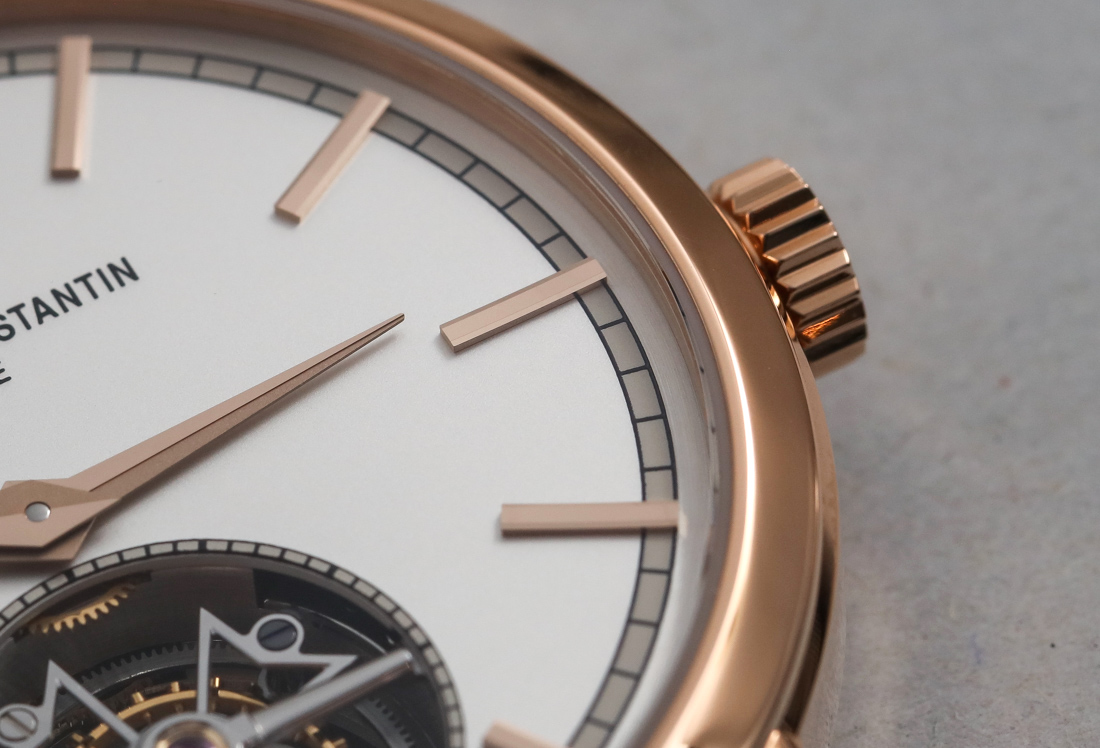 While it is a matter of taste, in my opinion the Traditionnelle dial and hands are among the finest and most appealing to look at among high-end dress watches. What makes the face of these timepieces a winner is that it does three things correctly. First is that the dial is well-made and attractive to look at. The indices are applied, the hands are elegant in their shape, and the dial overall is a testament to design restraint and refinement. Second is that the dial is very legible. Properly-contrasting materials and colors work well together to result in a dial you can read pretty much all the time. Don’t miss the dual-finished Dauphine-style hands which are polished on one facet and given a satin finish on the other facet. Third, is because this dial not only has personality to it, but also brand character. Seeing this dial more or less leads you to think “Vacheron Constantin,” and that type of brand identity is really important when asking a consumer to spend luxury watch volumes of money. 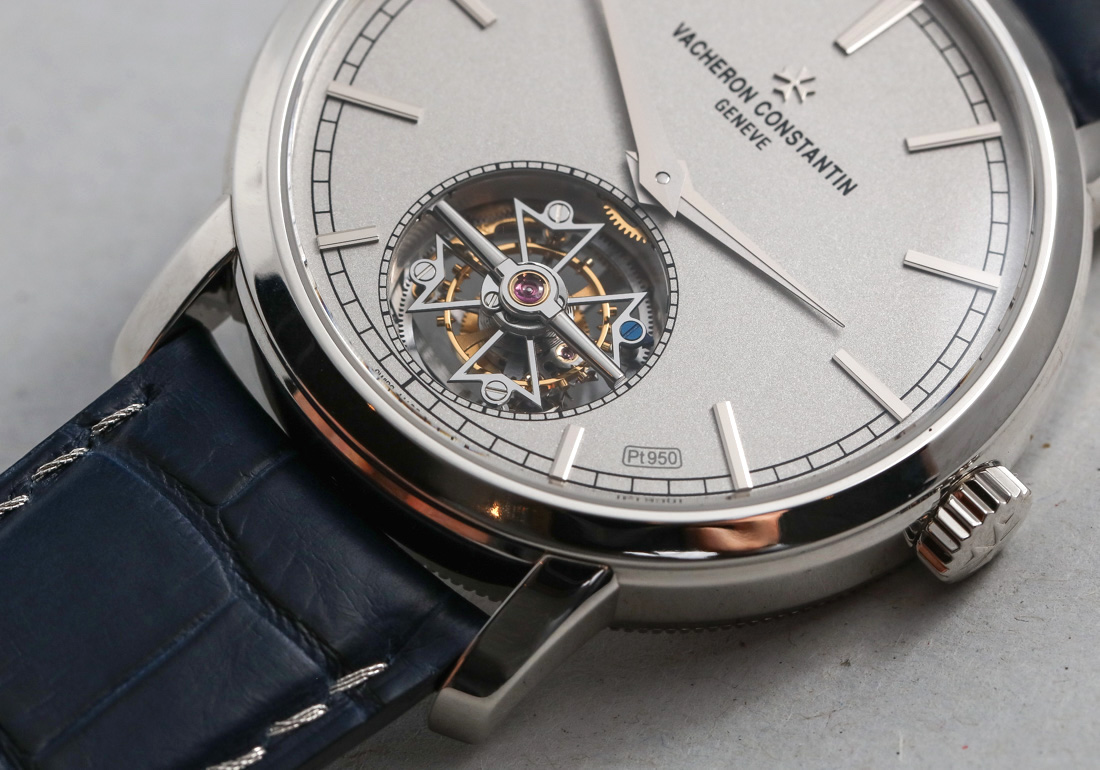 Finally symmetrical and offering just the time with a tourbillon window, the Traditionnelle Tourbillon dial simply makes me happy to look at – and isn’t that reason enough to like it? Speaking of brand-character, the Vacheron Constantin Maltese Cross logo is the shape of the tourbillon bridge, which I’ve always thought was a nice detail. Finishing on the tourbillon itself, the bridge, and most of the movement is very nicely done as per typical Vacheron Constantin standards. It is all part of the in-house made caliber 2160 automatic movement. 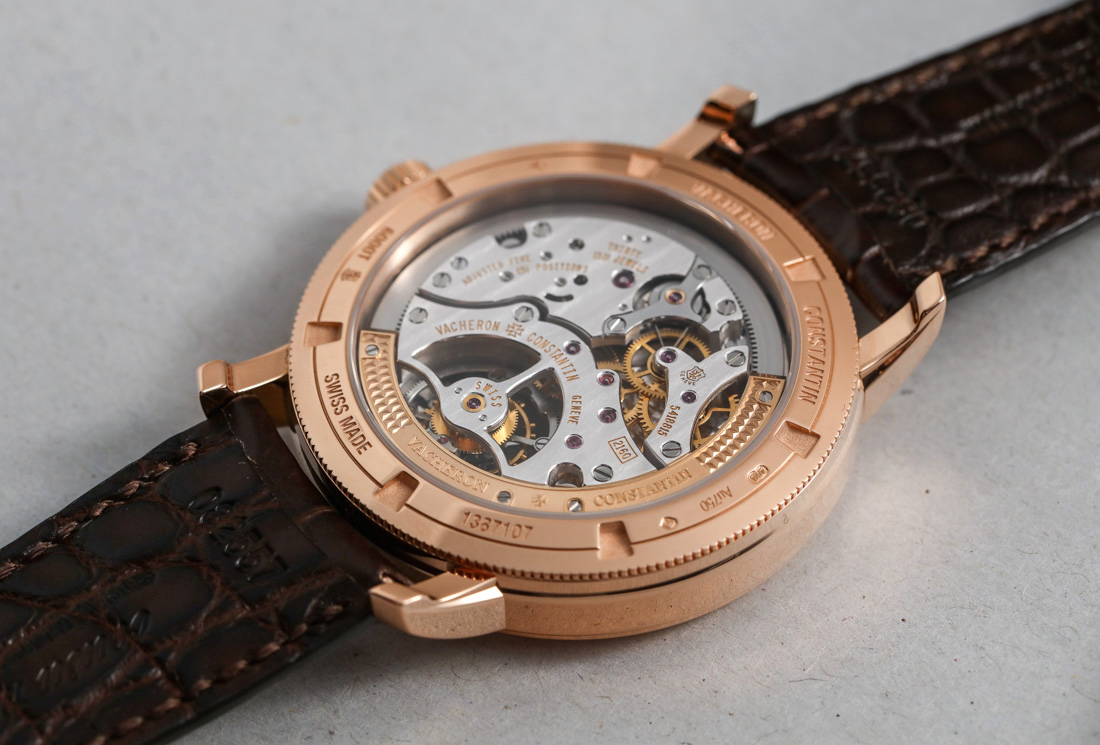 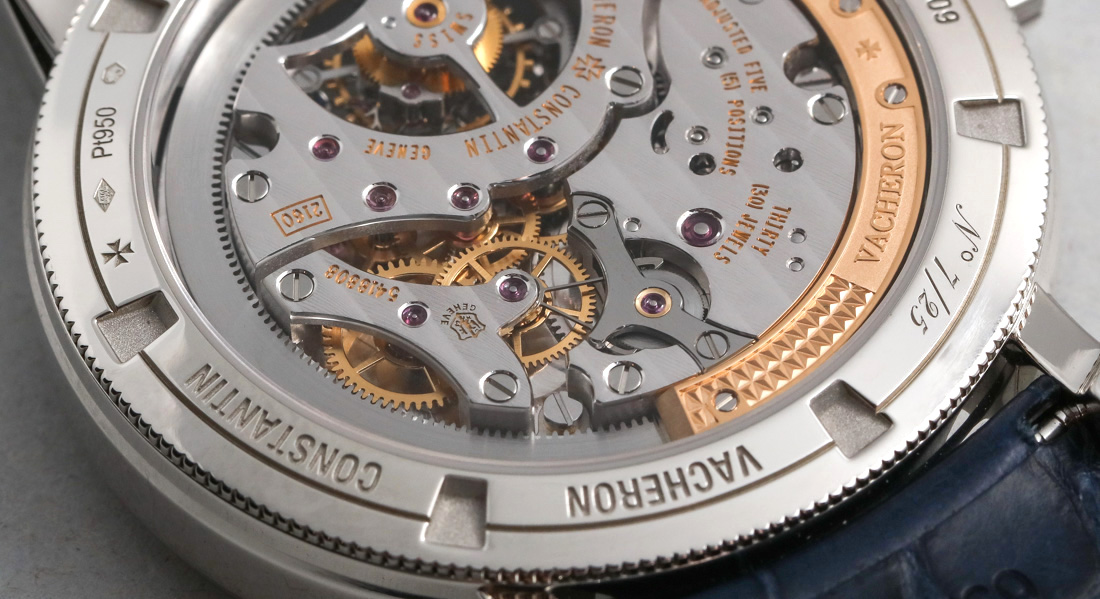 Speaking of automatic, the rotor is a semi-hidden peripheral rotor which sits on the outside of the movement. The half ring of engraved gold can be viewed through the sapphire crystal caseback, oscillating around the movement when in motion. Peripheral rotors aren’t new, but they aren’t common either. Their value is two-fold. First, when engineered properly they can help make a movement thinner because there isn’t an added mass on the back of the movement. Second, they allow for an unbridled view of the movement because it isn’t always partially blocked by a traditional automatic rotor. Therefore, in a system like this the user gets the convenience of an automatic winding system as well as the ability to fully appreciate the movement inside of the watch. 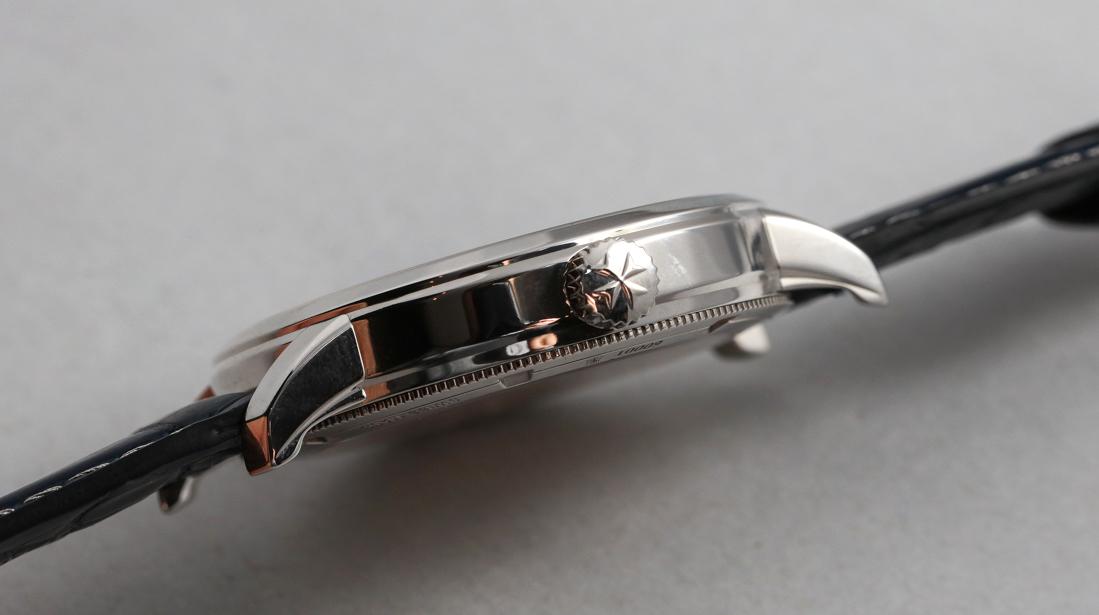 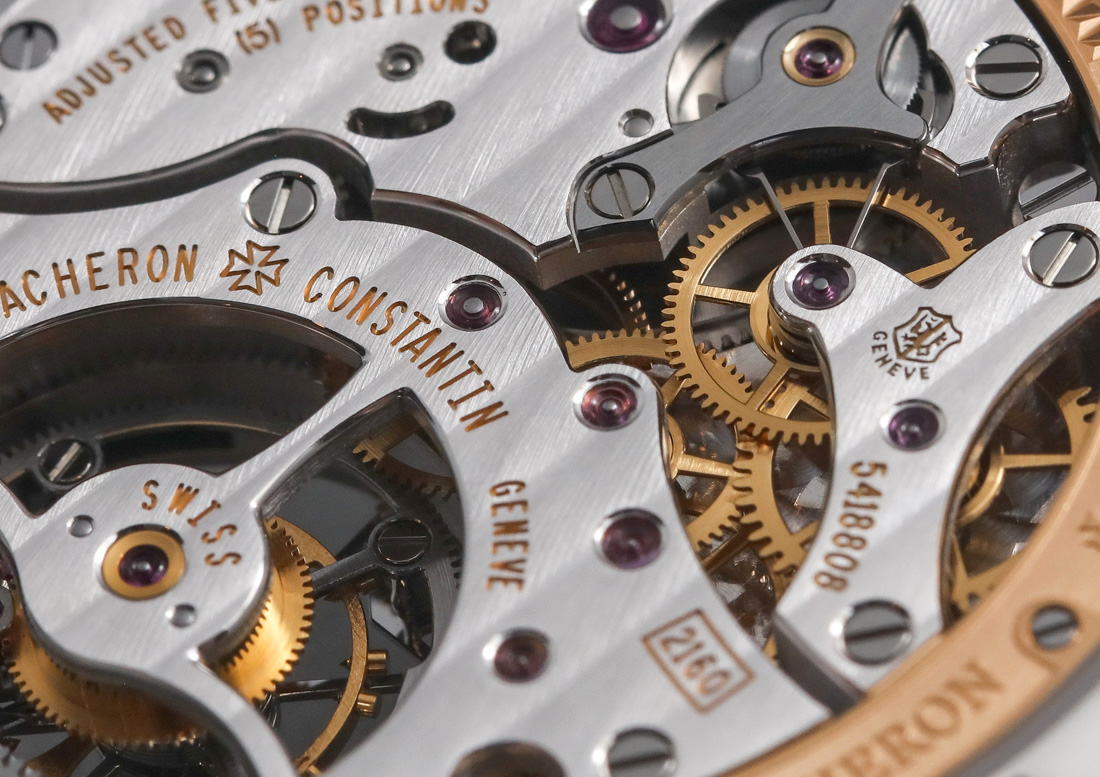 The Geneva Seal certified caliber 2160 is produced from 188 parts and is 5.65mm thick. The movement operates at 2.5Hz (18,000 bph) with a power reserve of 80 hours. My only quibble is that for better chronometric performance I’d like to see a movement like this operating at 4Hz (even if that does diminish the power reserve somewhat). Once again, the movement indicates just the time with hours and minutes on the main dial, and the 60-second tourbillon which doubles as a seconds indicator. The clever way that you read the seconds is by looking for the single blued-steel screw used in the tourbillon.

For 2018 Vacheron Constantin has produced two non-limited edition versions of the Traditionnelle Tourbillon which come either in 18k pink gold or platinum. The latter is part of Vacheron Constantin’s “Collection Excellence Platine.” That basically means in addition to the case (including the crown and strap buckle) being in platinum, so is the dial and I believe the hands and hour markers as well. Vacheron Constantin even uses thread in the alligator strap stitching which has platinum in it. The Traditionnelle Tourbillon Collection Excellence Platine version of the watch has a “PT950” label on the dial to remind users that these watches are exclusively for platinum fetishists. 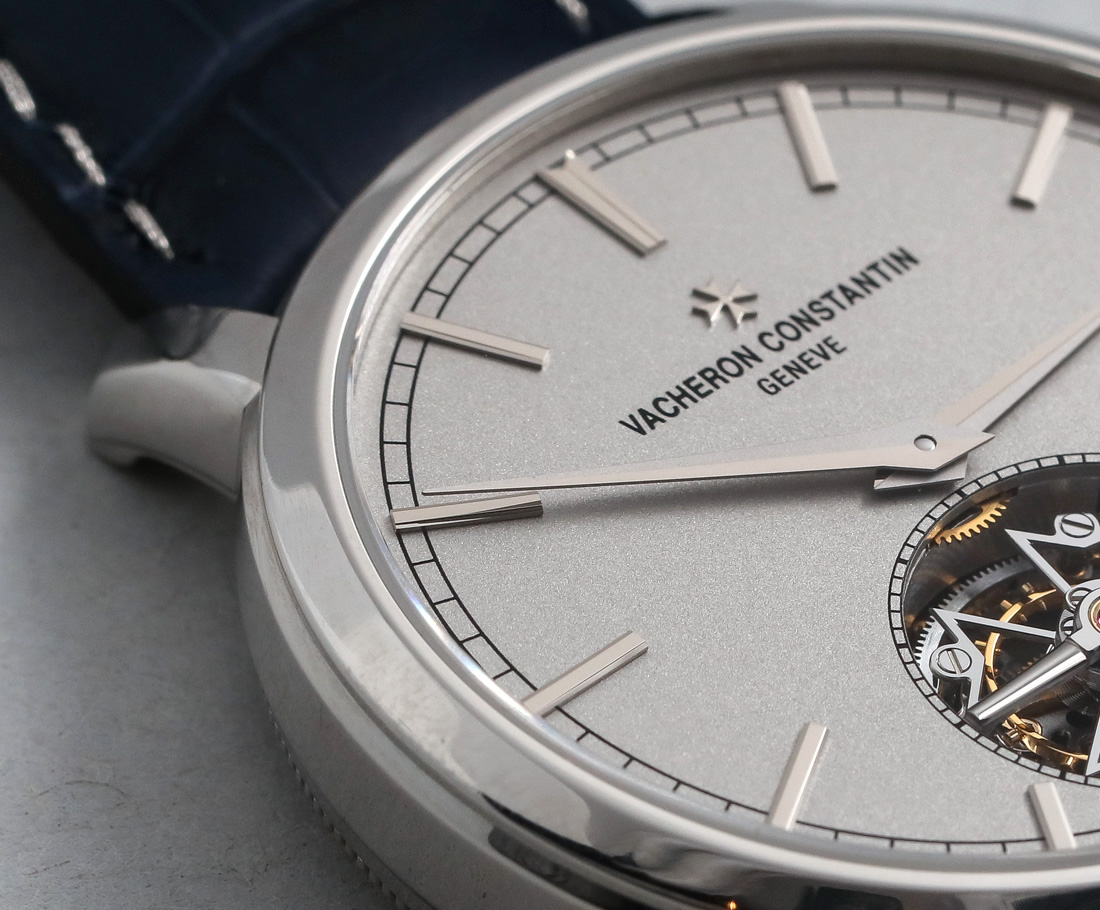 The unpretentious, simple, and practical execution of these Vacheron Constantin Traditionnelle Tourbillon watches make them winners in my opinion – assuming you have your sights set on spending over $100,000 USD on a watch. If you are “going tourbillon,” it is a good idea to go all the way. Vacheron Constantin did a great job in making a very high-end tourbillon wearable and practical for daily use, which isn’t something you can say all the time. Legibility and wearing convenience, in addition to a Poinçon de Genève-certified movement help round out the excellent horological package. Price for the Vacheron Constantin Traditionelle Tourbillon reference 6000T/000R-B346 in 18k pink gold is $118,000 USD and the Traditionelle Tourbillon Collection Excellence Platine reference 6000T/000P-B347 has a retail price of $149,000 USD. vacheron-constantin.com