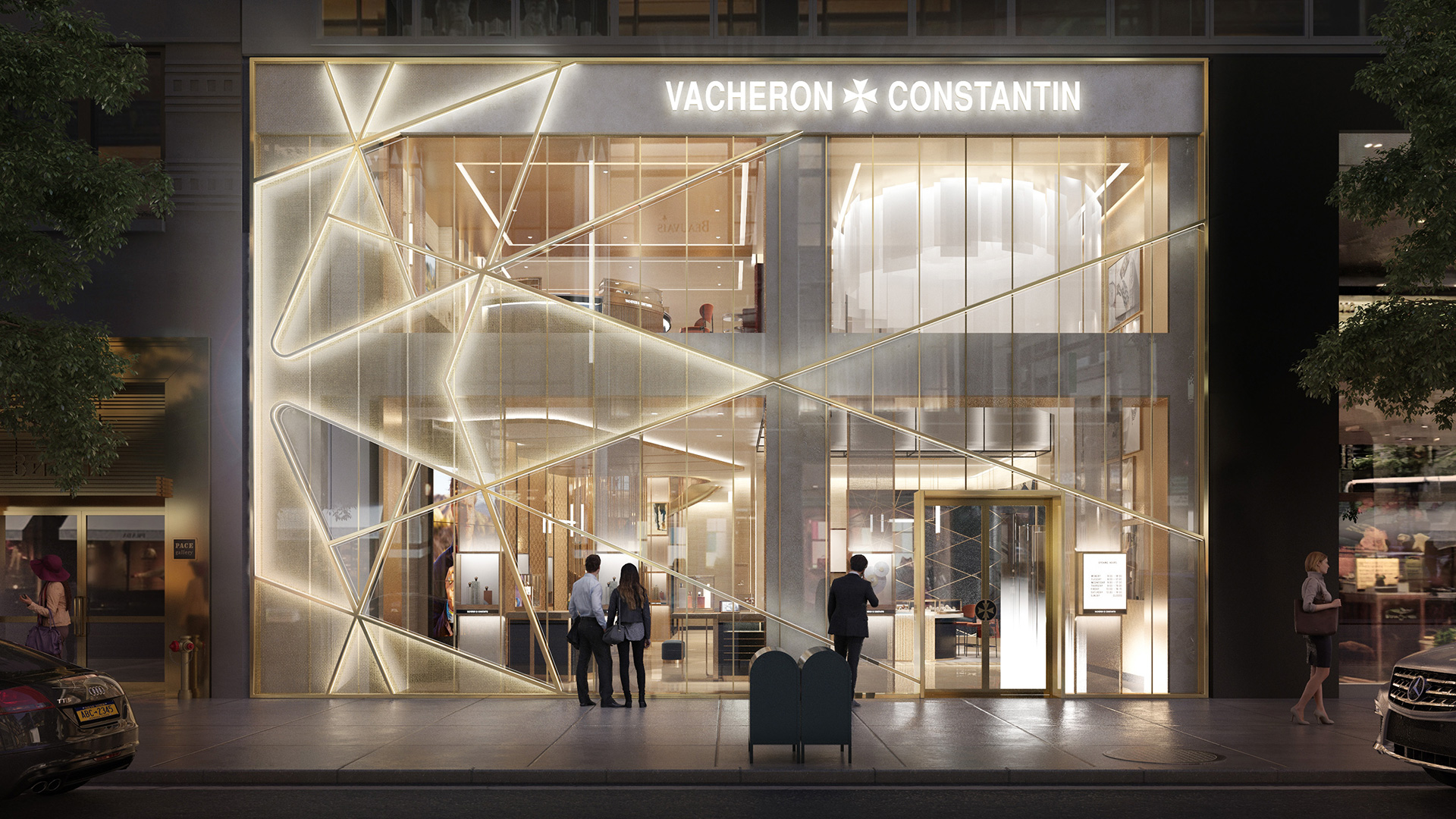 The all-glass facade of the new Vacheron Constantin flagshop at 57th and Madison in New York City.

The grand opening of Vacheron Constantin’s New York flagship at 57th and Madison last week was a star-studded affair with a fashion-week vibe. Guests included Katie Holmes, several supermodels, and the brilliant actor Alan Cumming, who performed a cabaret routine at a gala dinner following the opening. For watch lovers, however, the real star of the show was the special exhibit “Classic With A Twist,” a curated collection of vintage Vacheron Constantin watches from the 1910s to the 1930s (on display at the store through November). The exhibit is representative of the development of the brand’s unique aesthetic, which Vacheron describes as “the subtle harmony between the conventional and the atypical.” It combines high watchmaking with unique case shapes and design elements, reminding us that the iconic case shapes we see in today’s Vacheron Constantin collections were all created during the 1910s and 1920s. 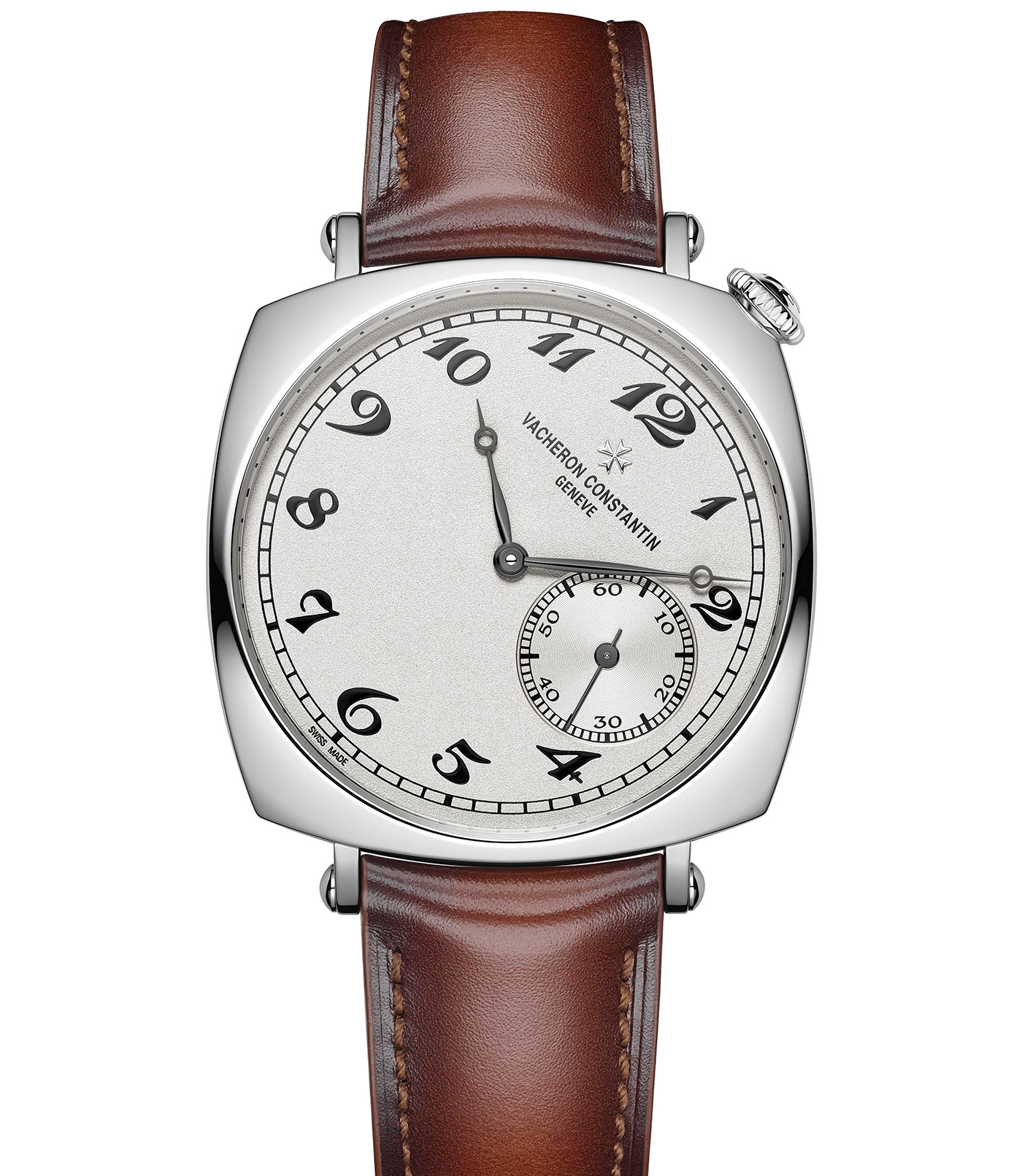 The modern white gold version of the Vacheron Constantin American 1921.

The star of the exhibit is an original American 1921, a model created 100 years ago that confirms Vacheron as one of the first brands to adopt the cushion-shaped case. With its avant-garde design consisting of a round dial in a cushion-shaped case, an atypical diagonal display, and an offset crown, the American 1921 was conceived as a driver’s watch that could be easily read at the angle of the wrist when gripping a steering wheel. The model in the exhibit, an 18k yellow-gold Ref. 11677, was made in 1921. It was part of the first two series of six cushion-shaped watches with offset dials and offset crowns that Vacheron Constantin produced between 1919 and 1921 for the American market. Vacheron is now making modern editions of the model in its Historiques collection. It was relaunched this year in white gold. Other vintage pieces in the exhibit include: 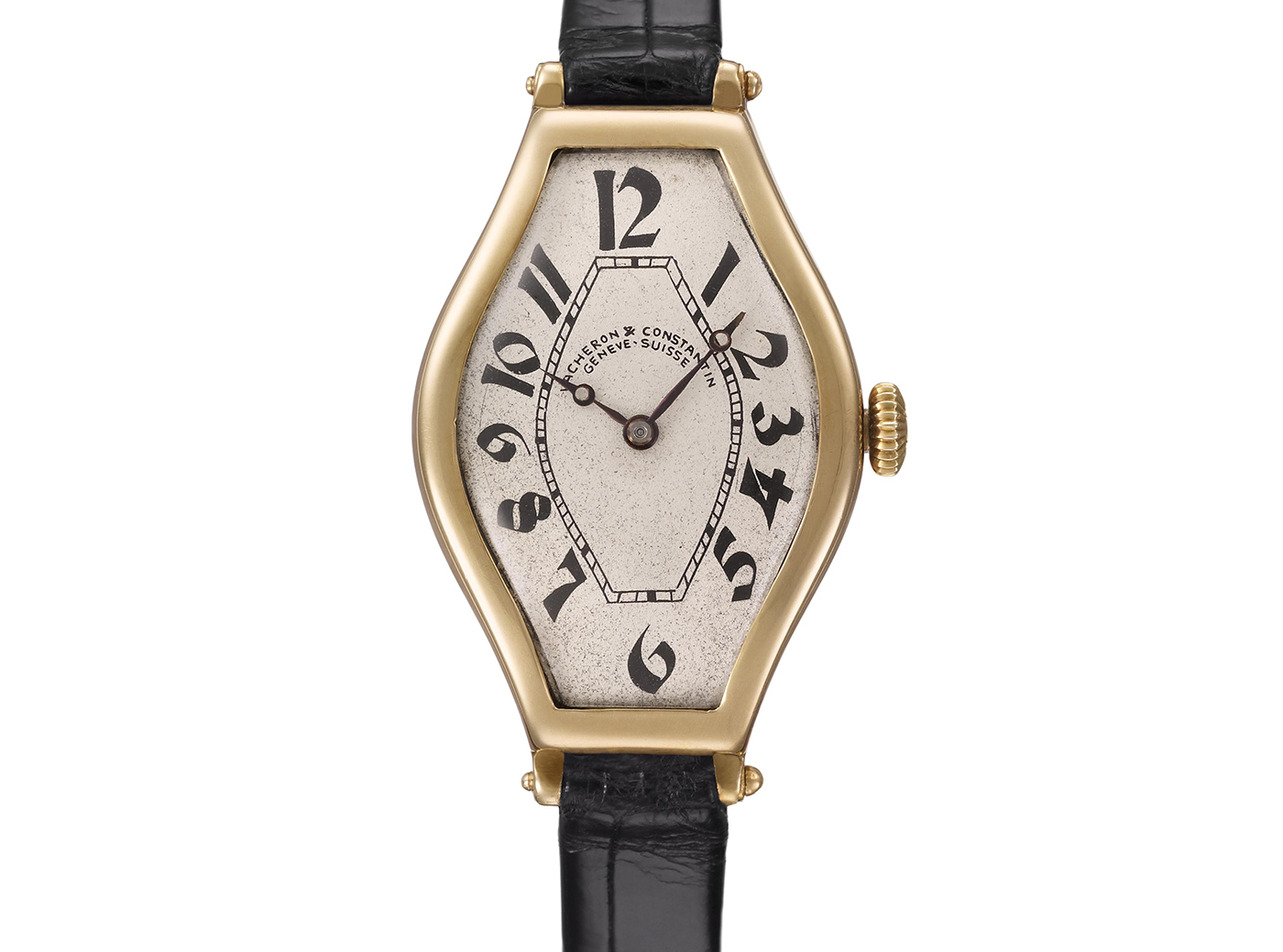 The Ref. 10144, part of Vacheron Constantin’s Classic With A Twist exhibit. 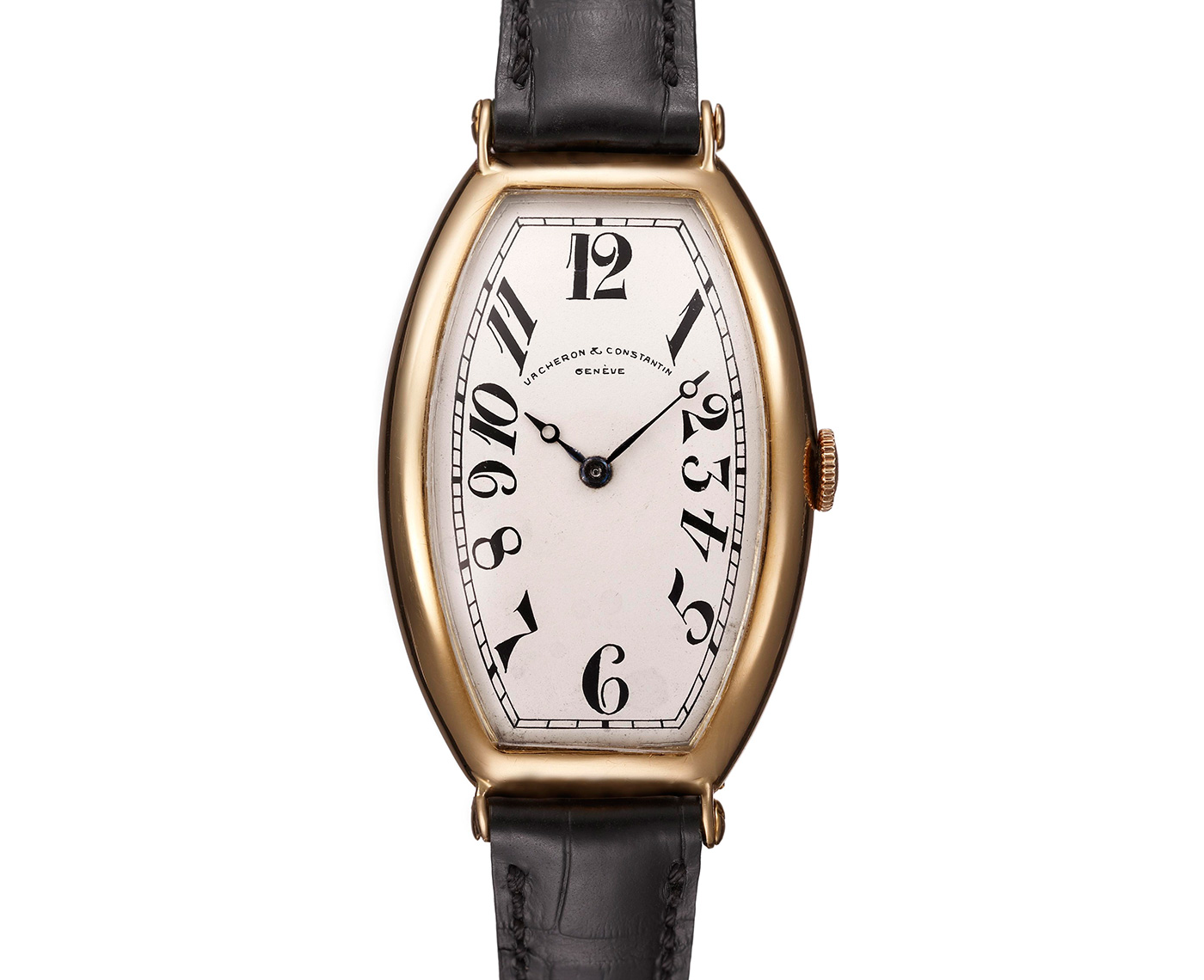 The Ref. 10594, part of Vacheron Constantin’s Classic With A Twist exhibit.

– Two 18k yellow gold watches with cases representing variations on the tonneau shape – one is elongated, and the other is almost diamond-shaped. Ref. 10144 and Ref. 10594 were both made in 1915. Both have railroad minute tracks that trace the outline of the case. 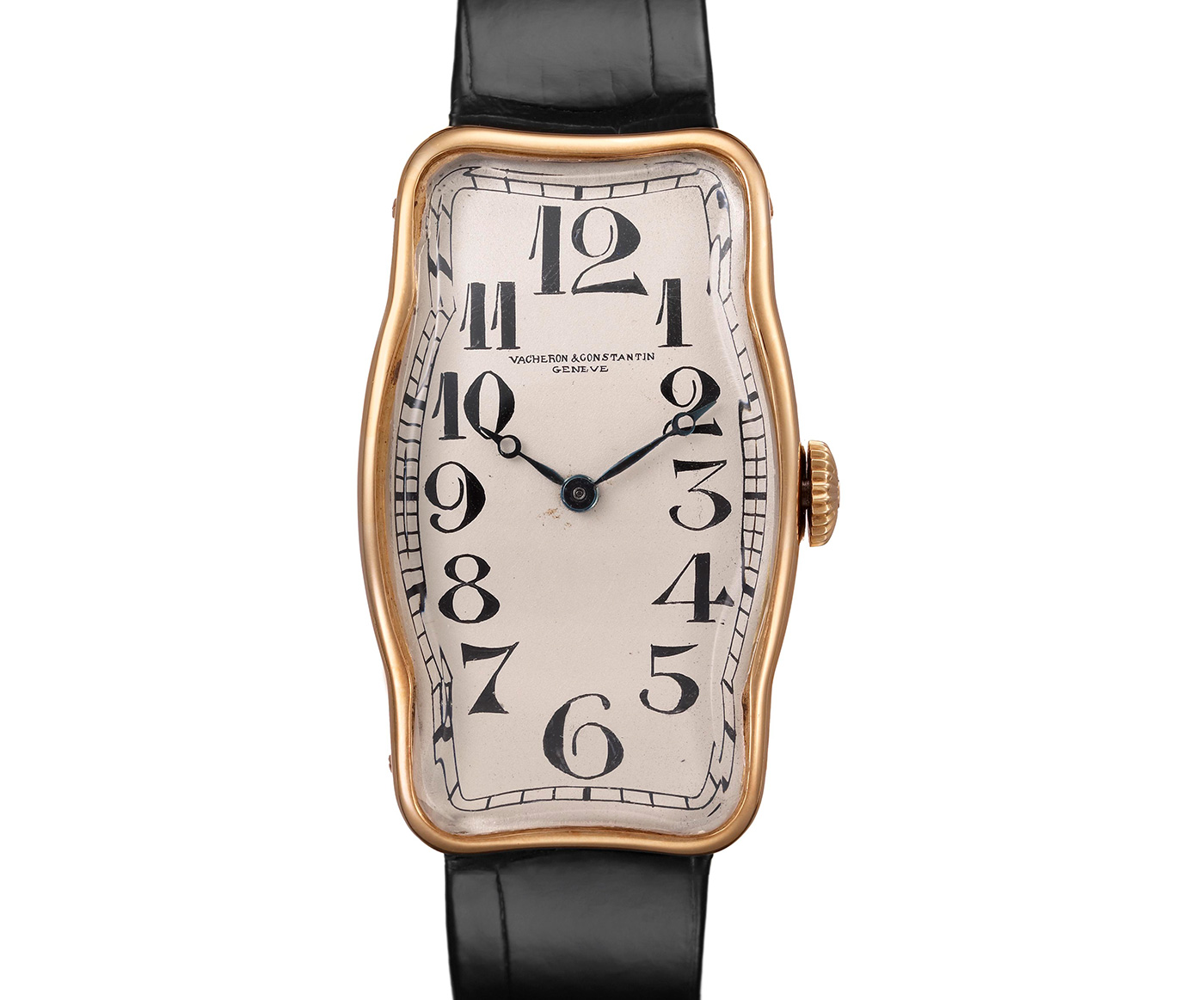 The Ref. 10970, part of Vacheron Constantin’s Classic With A Twist exhibit.

– Ref. 10970 has a special-shaped case that defies description. Neither rectangular nor oval, it has a curving, almost freeform outline, with black enameled numerals and characteristic “oeil de perdrix” hands. 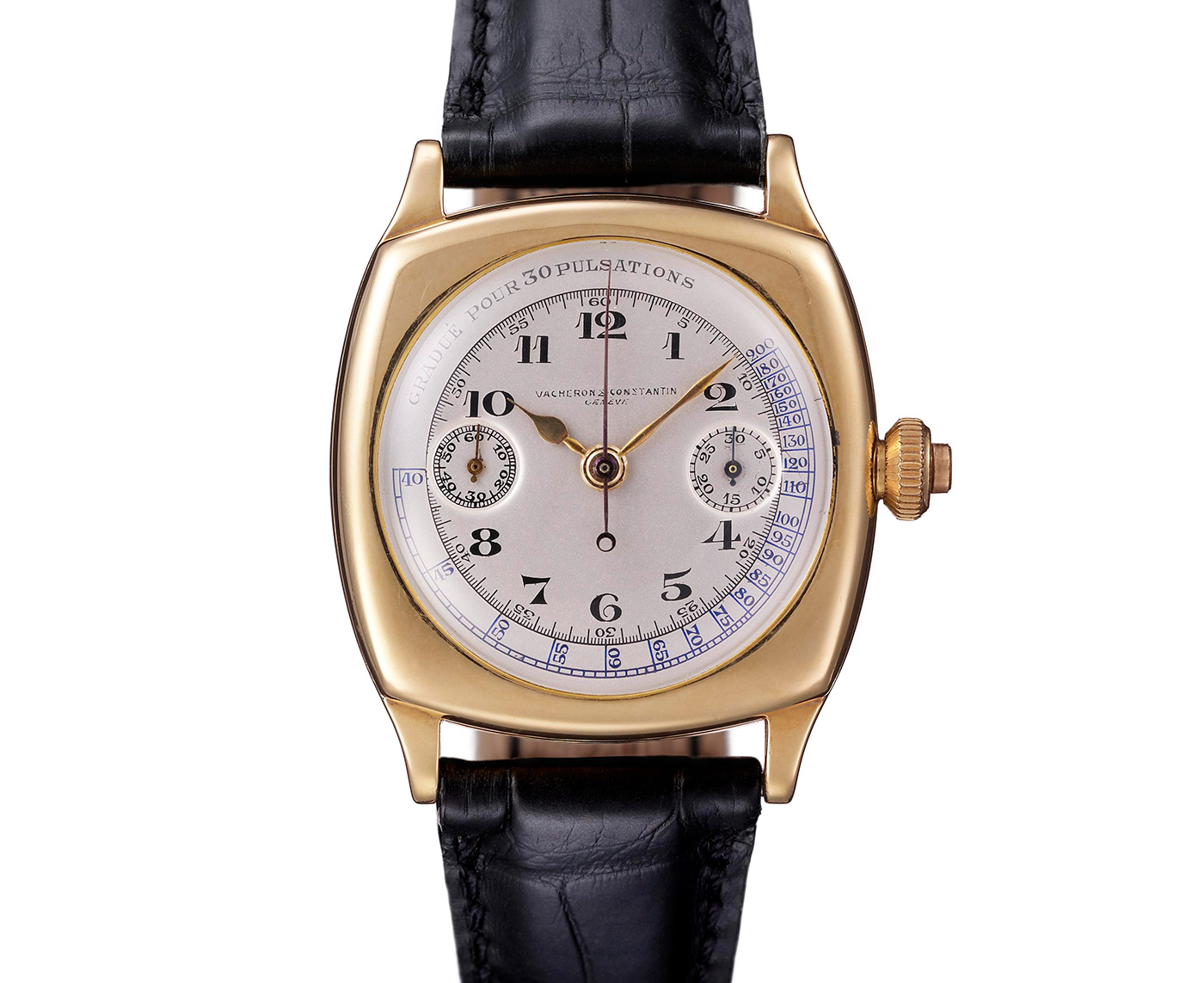 The Ref. 11059, part of Vacheron Constantin’s Classic With A Twist exhibit.

– The vintage single-pusher Chronograph Ref. 11059, made in 1928, has a graduated pulsometer scale for 30 beats and gold leaf-style hands. The cushion-shaped case was clearly an inspiration for the Harmony chronograph in the current collection, which also has a pulsometer. 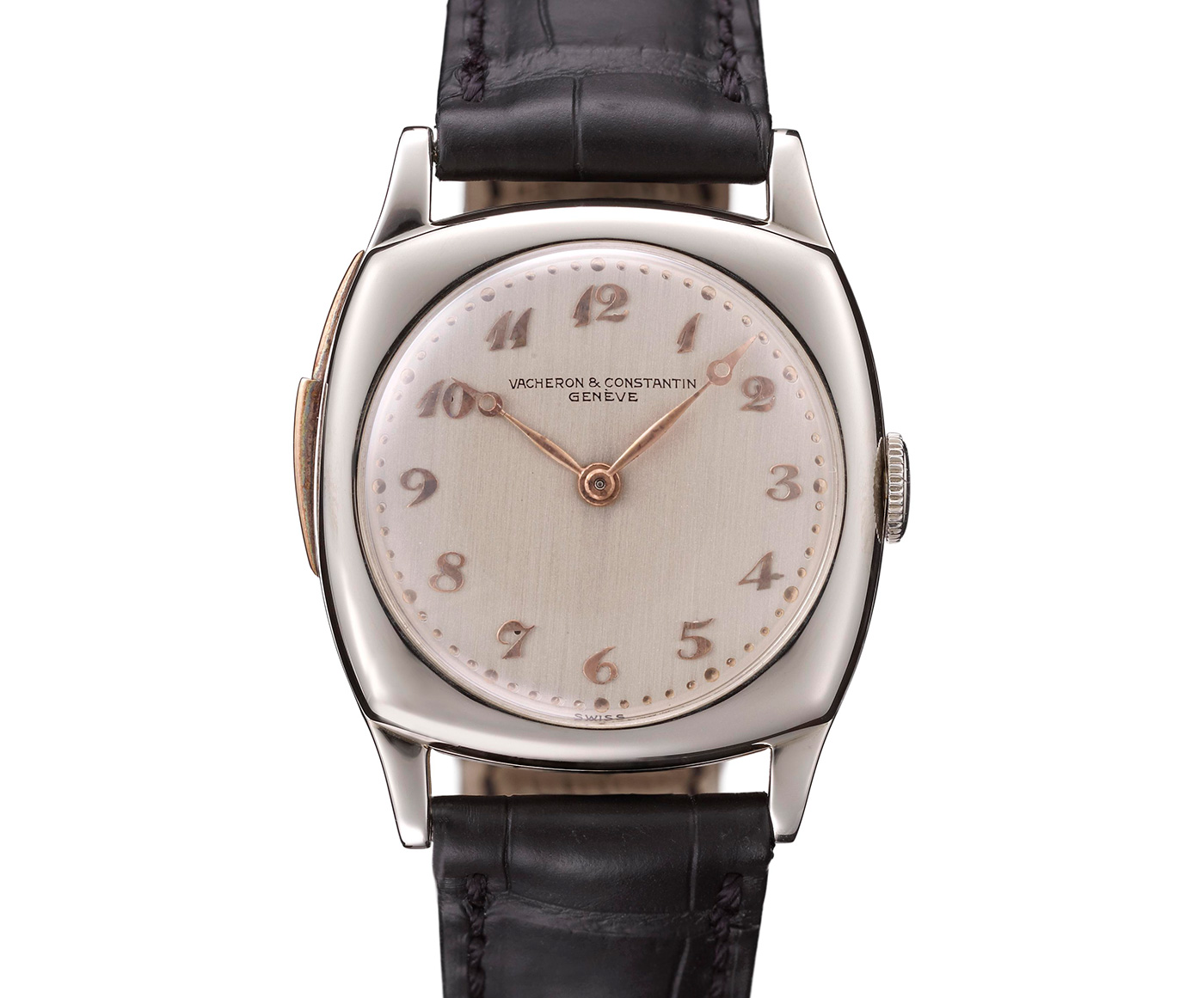 The Ref. 11243, part of Vacheron Constantin’s Classic With A Twist exhibit.

– In a similar case shape, the Ref. 11243, made in 1930, has a simpler dial but a more complicated movement. It’s a minute repeater in pink and white gold. From the 1920s onward, the minute repeater mechanism became the third type of complication sufficiently miniaturized to be incorporated into a wristwatch case. 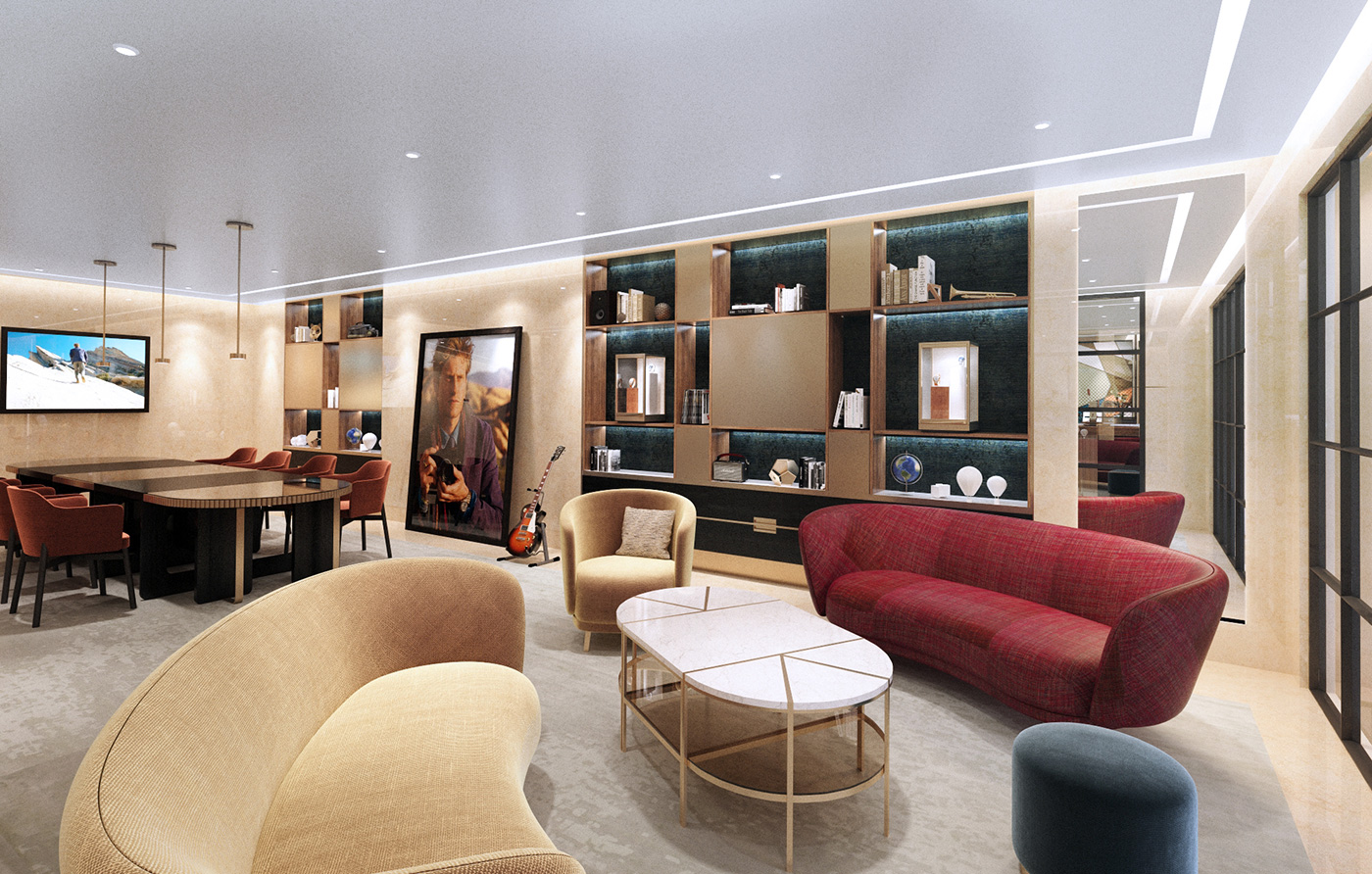 Although the watches in the exhibit are not for sale, Vacheron Constantin does have an extensive restoration department, where it repairs pre-owned watches and brings them back to the market in its Les Collectionneurs division, and there is an ongoing selection for sale in the New York flagship boutique. Vacheron also sells pre-owned watches via its partnership with Watchfinder, which is also owned by the Richemont Group. 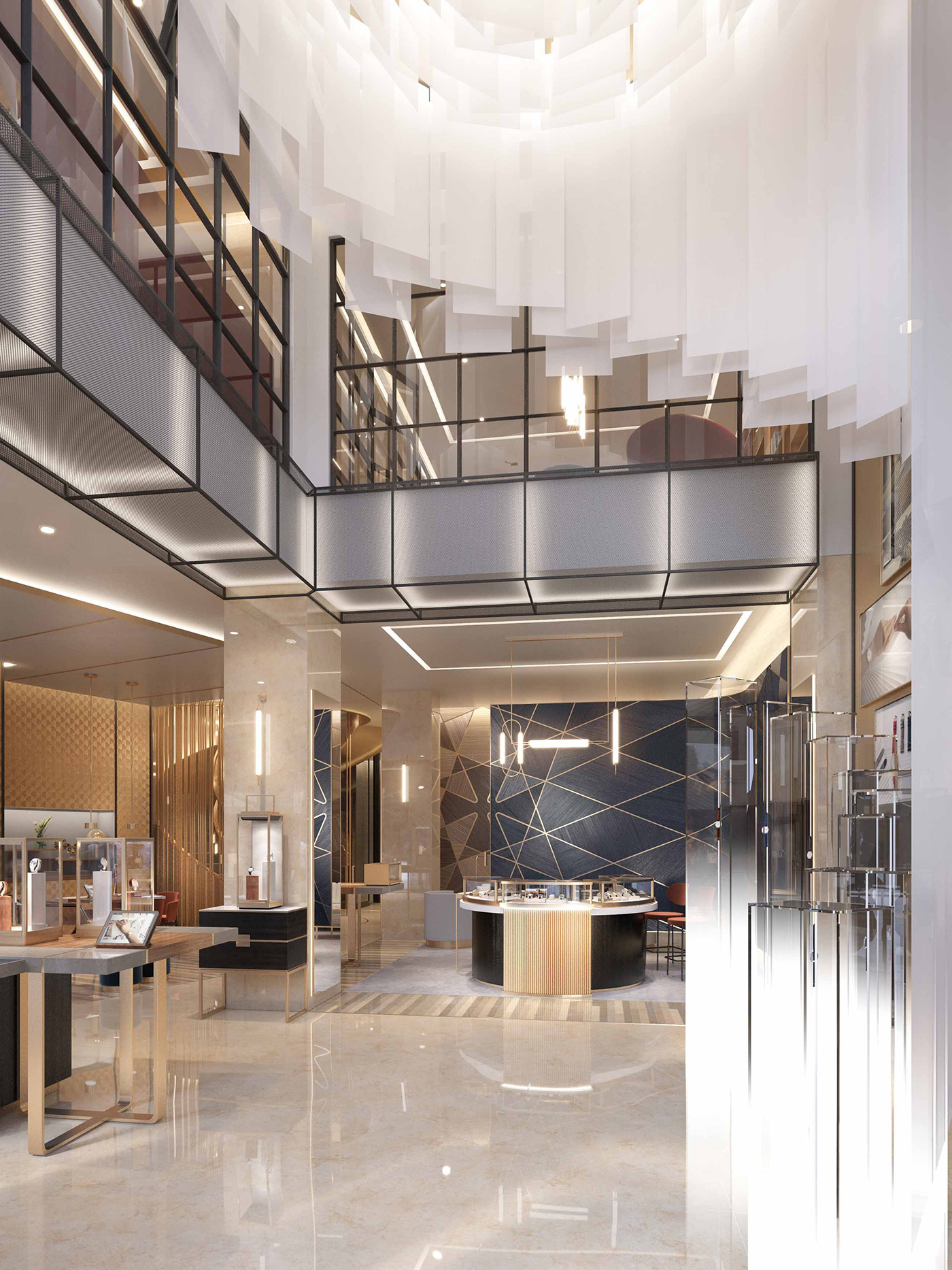 The two-level, atrium-like space represents a similar fusion of heritage and modernity.

The two-level, atrium-like space itself represents a similar fusion of heritage and modernity. It’s a modern, light-filled space that redefines retail by including lounge and bar areas, private showrooms and an open area where a watchmaker sits at his bench, and of course, plenty of traditional showcases. Historic exhibits like Classic With A Twist are juxtaposed with modern art exhibits, including the current installation, inspired by American artist Chris Burden’s “Metropolis.” Located near the entrance of the store, it’s a miniature recreation of a cityscape, complete with a small moving car on a freeway that weaves among the skyscrapers. The Vacheron version is a tasteful, toned-down, tone-on-tone version of the cityscape. It was created in collaboration with the Chris Burden Estate, especially for the Grand Opening. 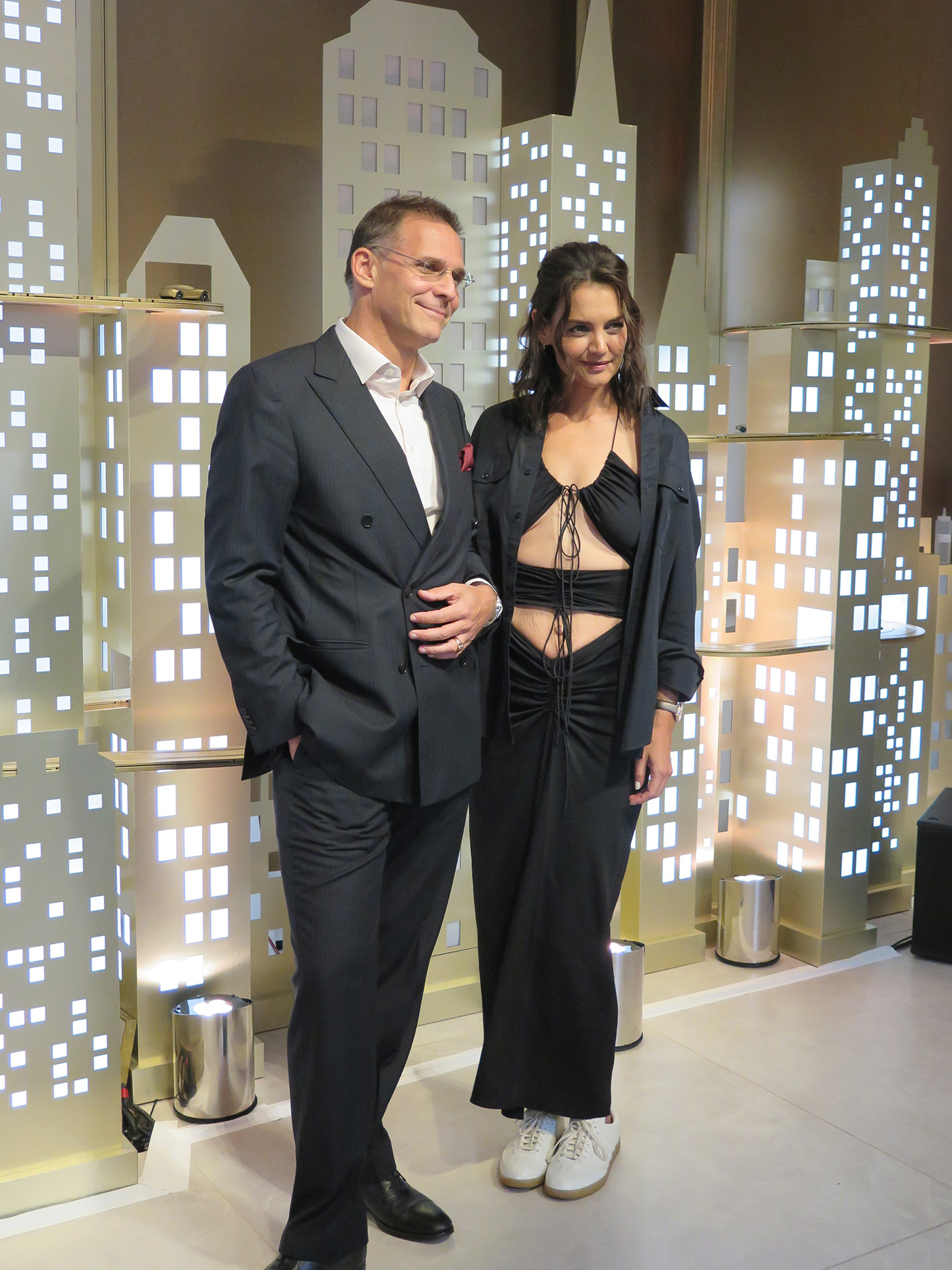 “The boutique is a perfect example of how tradition meets modernity,” says Alexander Schmiedt, president of Vacheron Constantin Americas. “It has a very modern façade, with lots of daylight. There are elements of the global brand but elements that refer to the uniqueness and urban sensibility of New York, like the Chris Burden-inspired exhibit.” The new flagship represented “a considerable investment for the brand,” he says. “And it was also a daring bet. We made the decision to continue to push through with it at a time when 85% of our distribution was closed, which you can imagine was not fun. But we take a long-term view. The company has seen a lot of crises in its 265-year history. There is a Chinese character for crisis: in one direction lies danger, and in the other, opportunity – that’s where you position yourself for your future. We continued to invest in all the right places, and we continued to introduce new products. We opened in June, and now the city is coming back. So I believe it was worth taking the risk.” 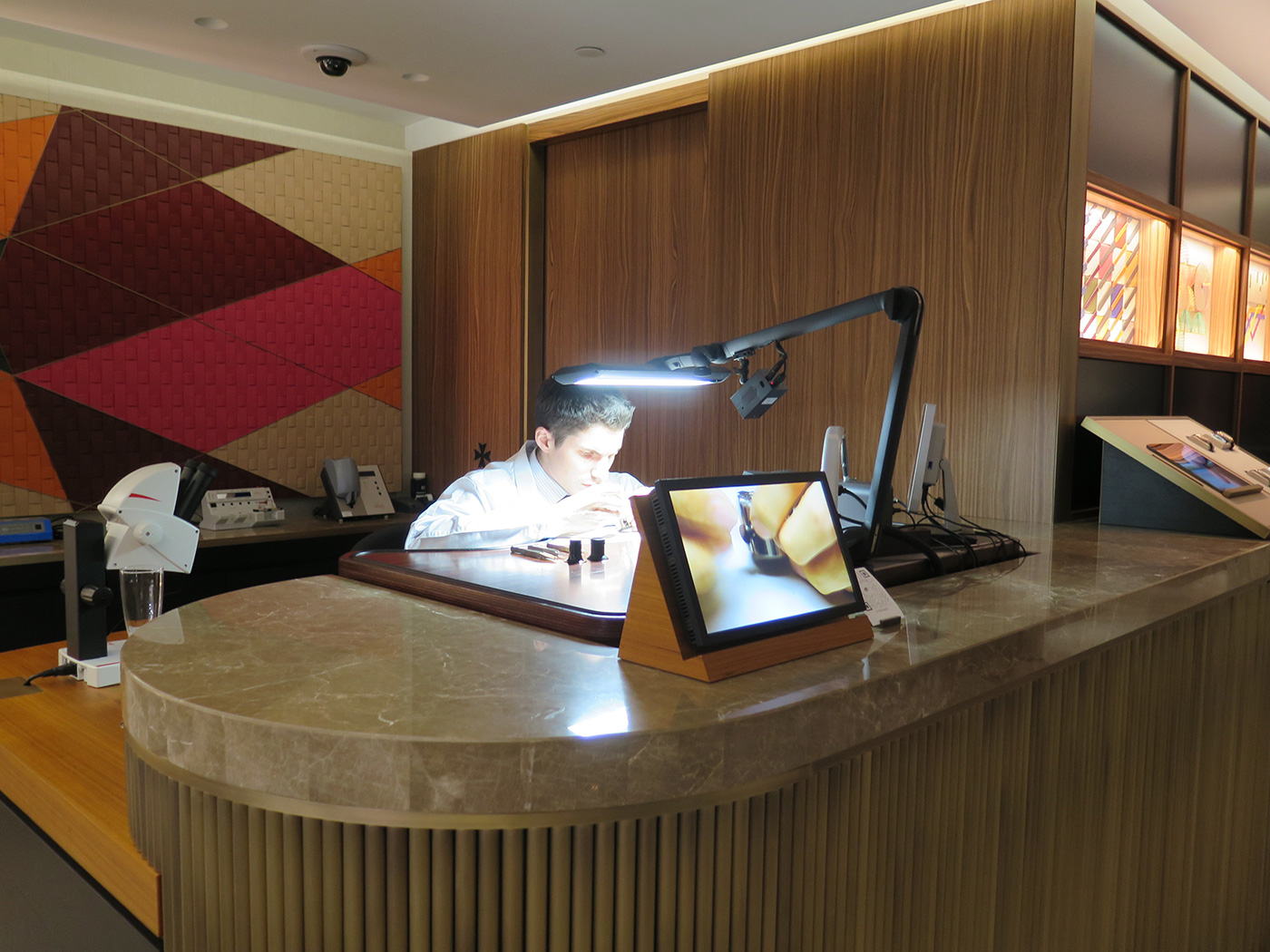 A watchmaker works in an open space in Vacheron Constantin’s New York flagship at 57th and Madison.

There is a view of 57th Street from almost everywhere in the 4500-square-foot store, which makes visitors feel integrated into the city, yet it’s a calm, elegant space where customers can relax, have a drink or a coffee, or see a watchmaker in action. “I really want to use this space to bring watch lovers here from around the world to experience how watchmaking at Vacheron Constantin is different,” says Schmiedt. “During Covid, we did that digitally, and now we can do it in person again.” 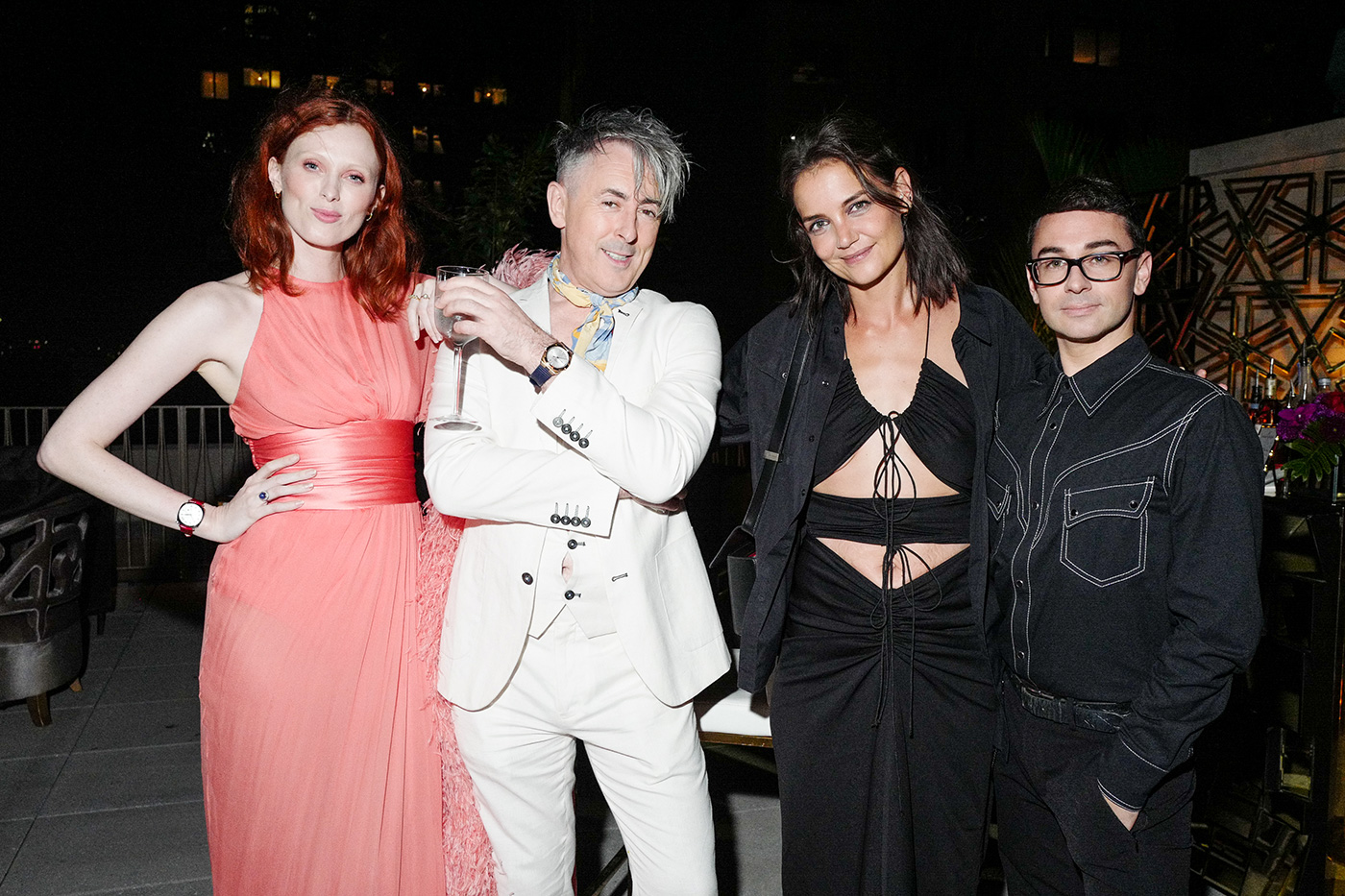 At the opening party, supermodel/singer-songwriter Karen Elson debuted her new song, “Lightning Strikes.” Partygoers were later transported via vintage 1920s automobiles, including the new luxurious Rolls-Royce Ghost car, to a secret speakeasy at the penthouse at Steinway Hall. High above the city streets on the 21st floor, they were treated to 1921- and 2021-themed cocktails under the stars. 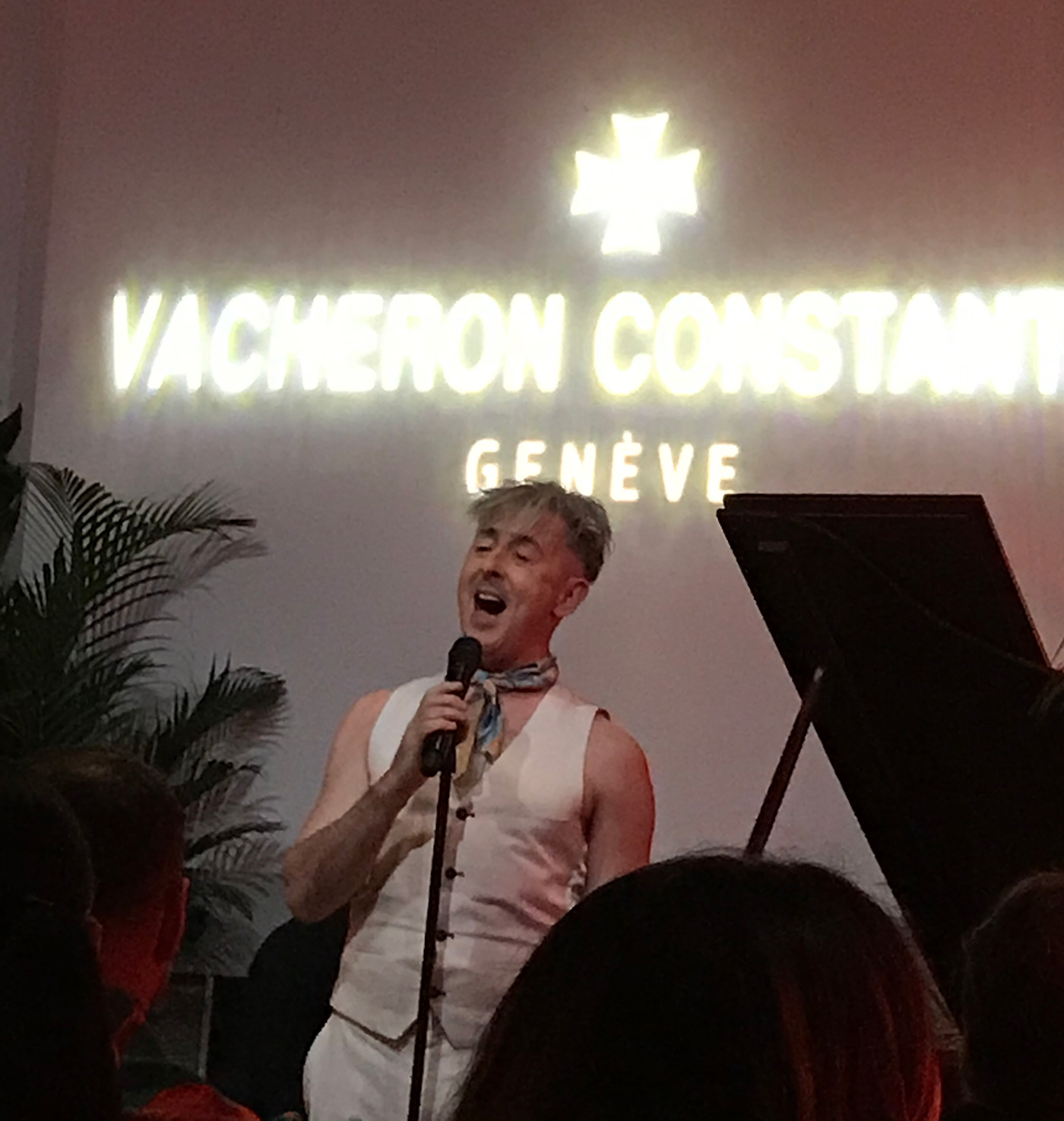