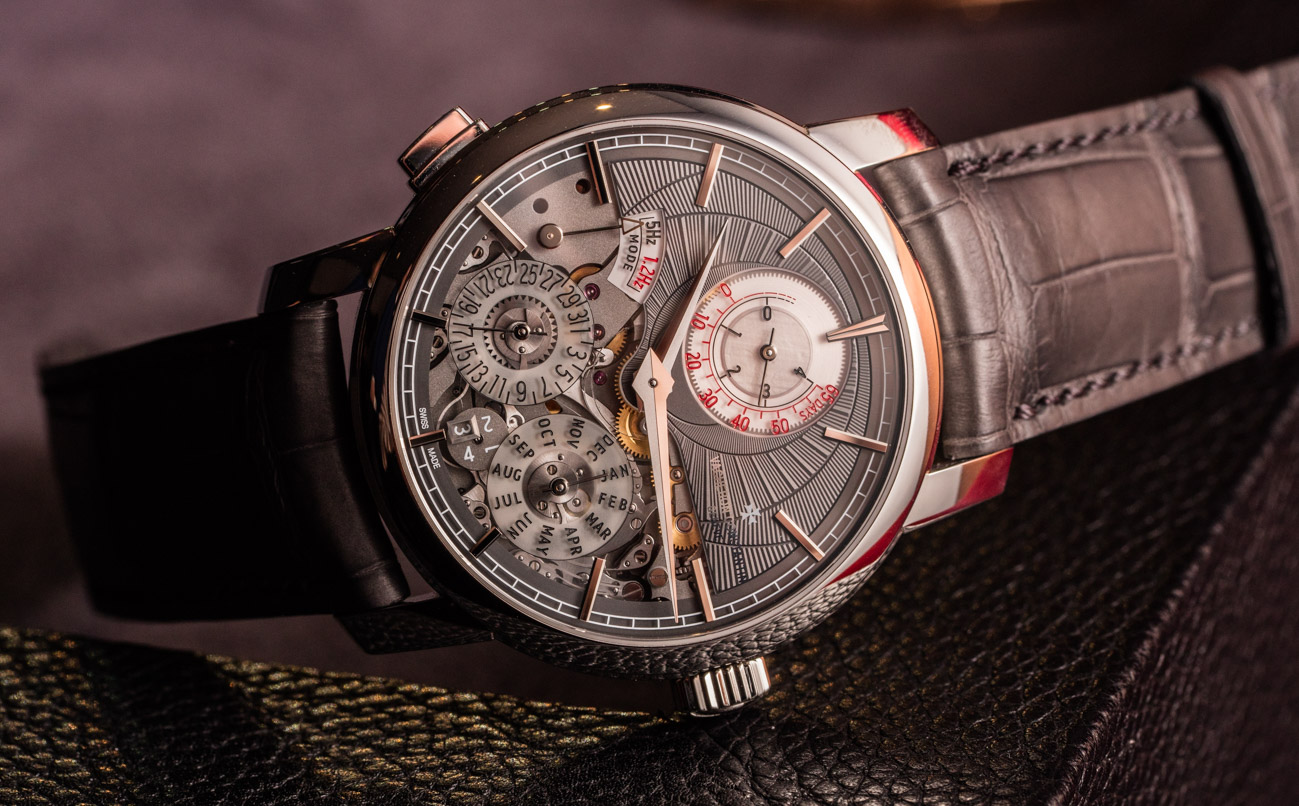 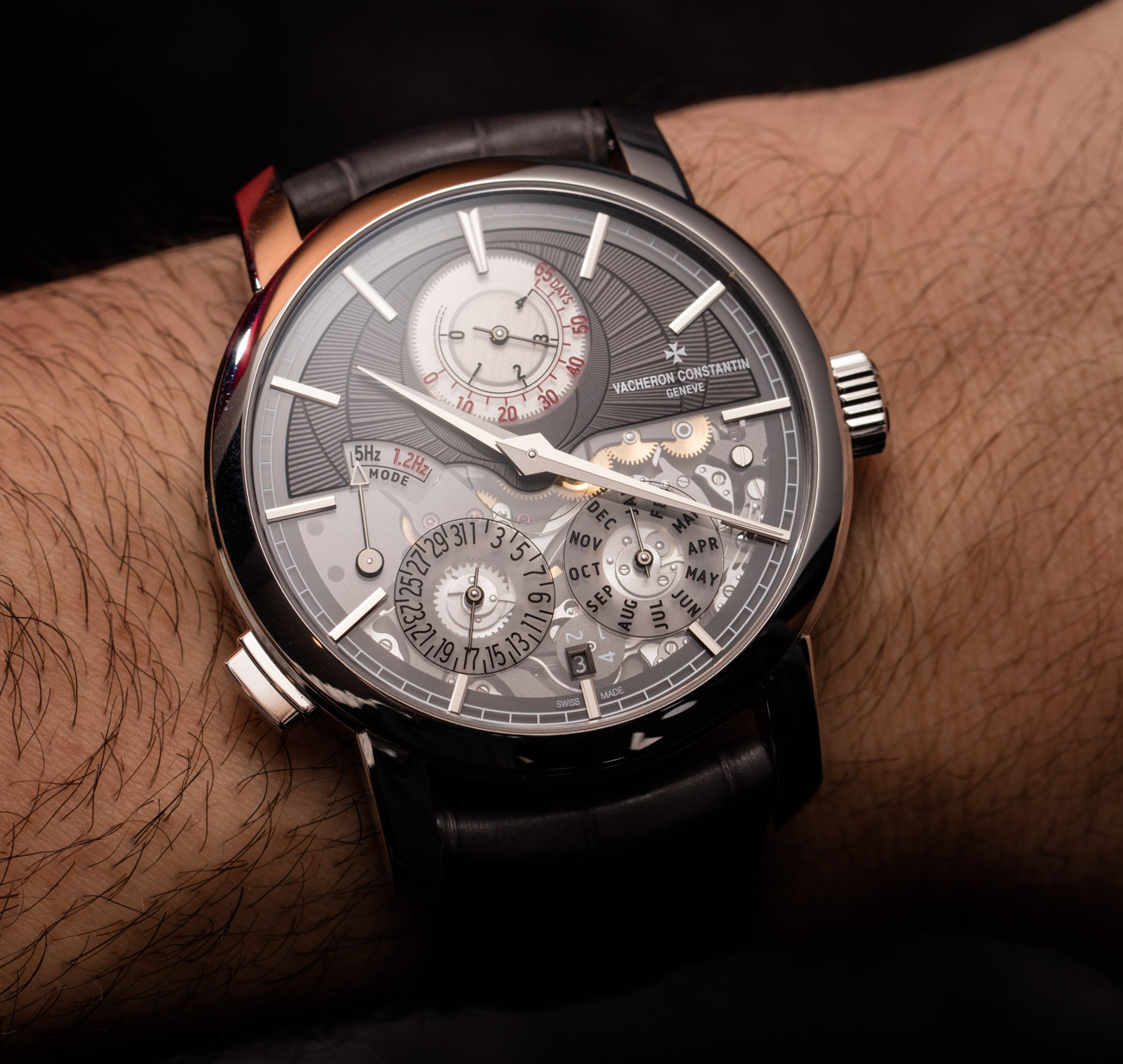 The highlight product for Geneva-based Vacheron Constantin at SIHH 2019 was this impressive and technically novel Traditionnelle Twin Beat Perpetual Calendar watch. After some hands-on time with the “Twin Beat,” the aBlogtoWatch team collectively agreed that it earned a place on our Top 10 Watches of SIHH 2019 list. It isn’t, however, immediately clear what makes the Twin Beat Perpetual Calendar watch distinctive, as well as what the technical innovation inside it is.

Vacheron Constantin itself seemed to struggle in choosing the right language to describe the Twin Beat’s novel complication. They use terms such as “user-controlled dual-frequency watch” to describe the system. I’m not sure that explains it very well. No slick marketing term has been created for the otherwise patent-pending system which is designed into the caliber 3610 manually wound movement. The best explanation offered by Vacheron Constantin is that the watch has user-controlled “active” and “standby” modes. Basically, the Twin Beat has a “sleep mode” akin to electronics items in which a device continues to operate, but in a low-power mode designed to extends its power-reserve life. 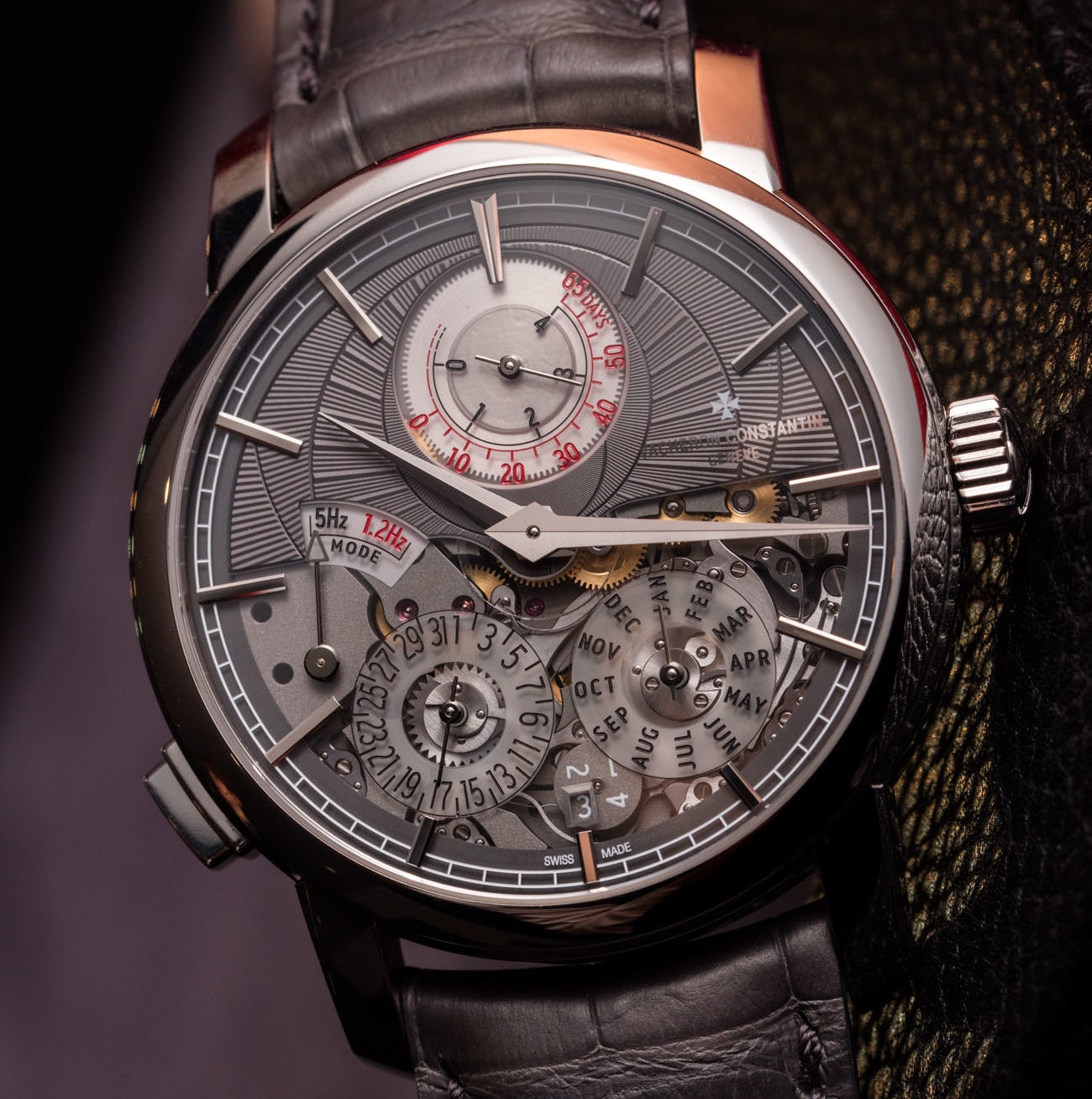 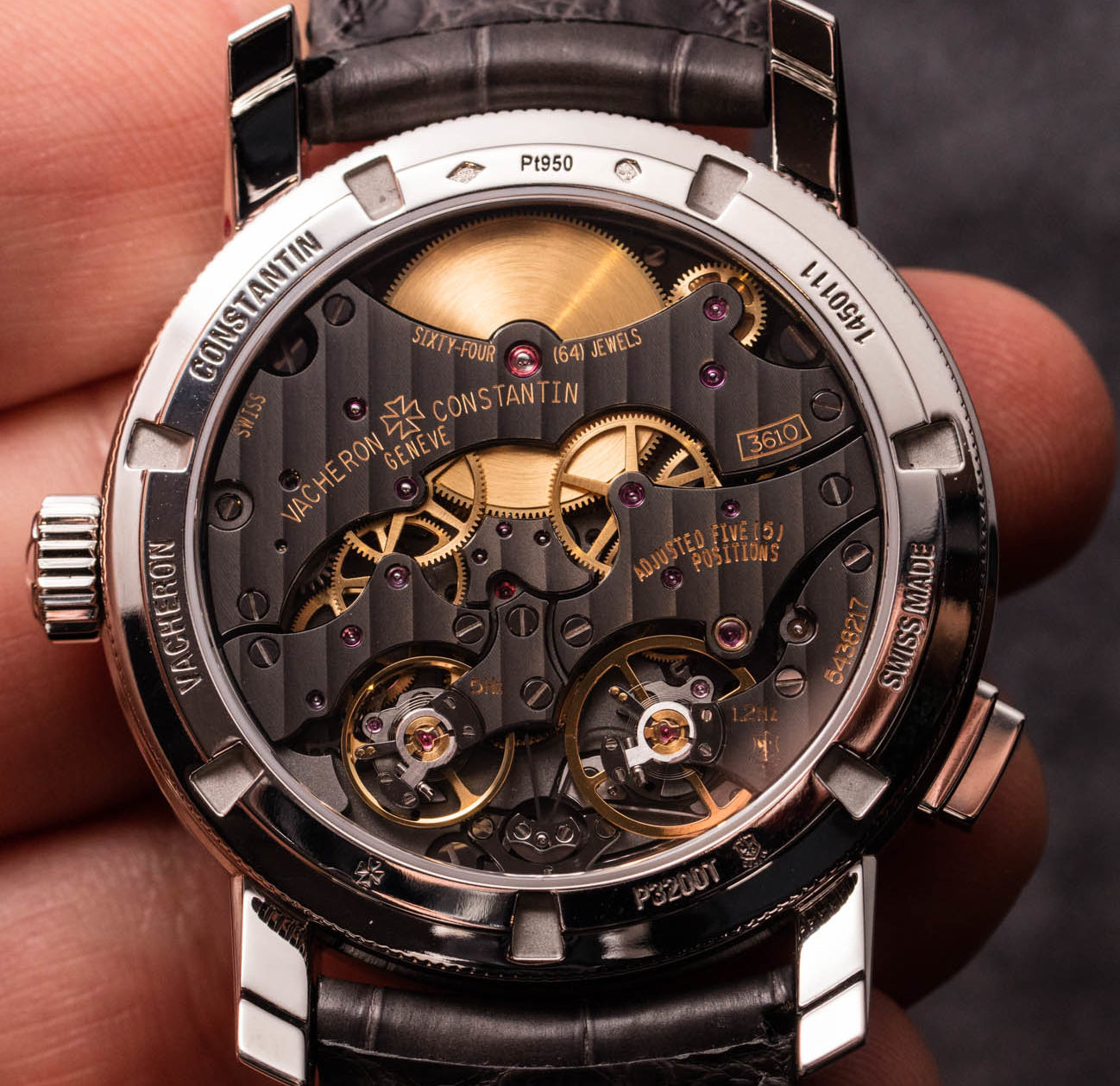 That translates into a movement that can be set to operate at either 5Hz or 1.2Hz. There is a pusher on the left side of the case that activates a transmission that turns off one regulation system to switch to another. Turn the watch over, and you’ll see the two different balance wheels — only one of which is operating at any given time. The “Twin Beat” moniker is a bit of a misnomer because the system doesn’t simultaneously operate in both frequency modes — but rather in one at a time. The visual experience of switching between the balance wheels using the pusher is pretty entertaining.

From a strict chronometric standpoint, there is probably some time loss that occurs when you switch from one frequency mode to another. The point of the system isn’t chronometric perfection, but rather movement power-reserve longevity. The movement is intended to be operated at 5Hz while on the wrist and at 1.2Hz when not on the wrist in a stable position. 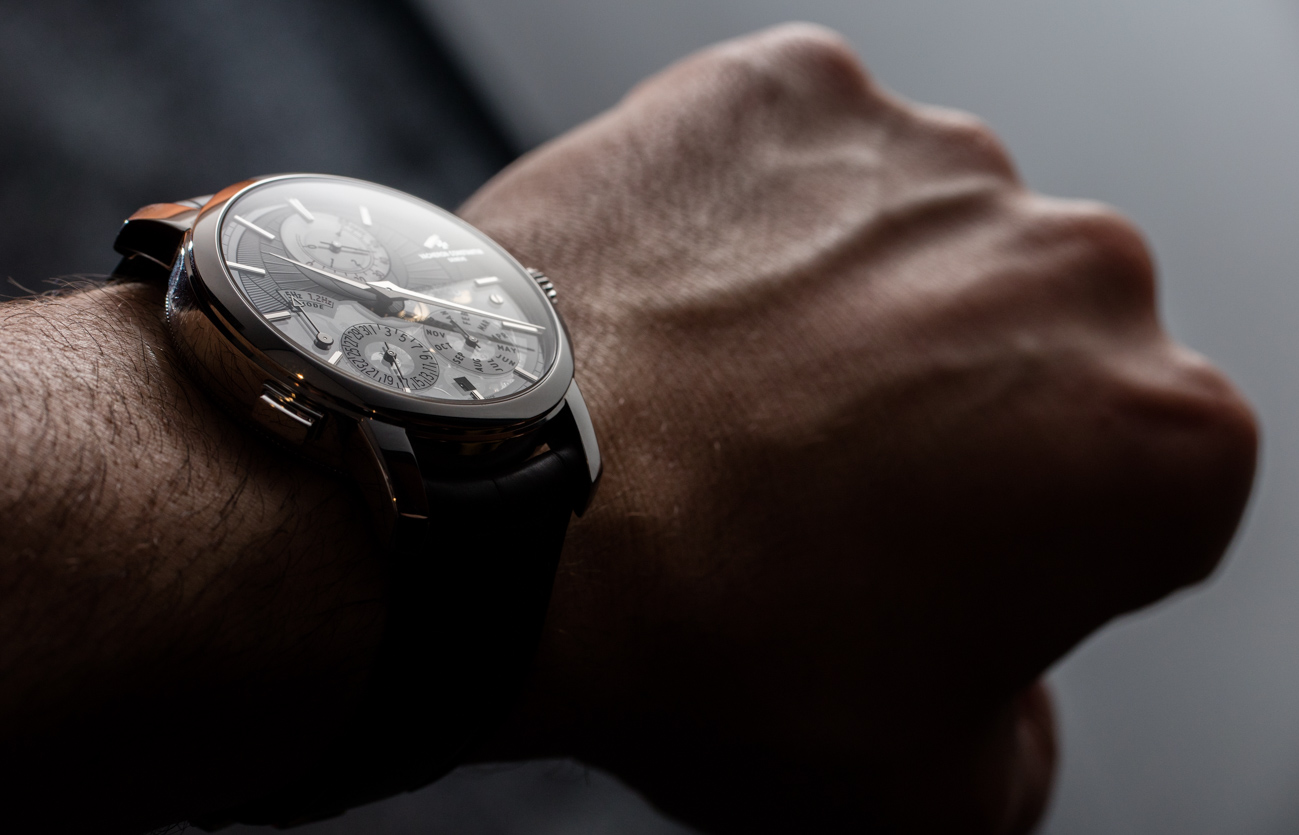 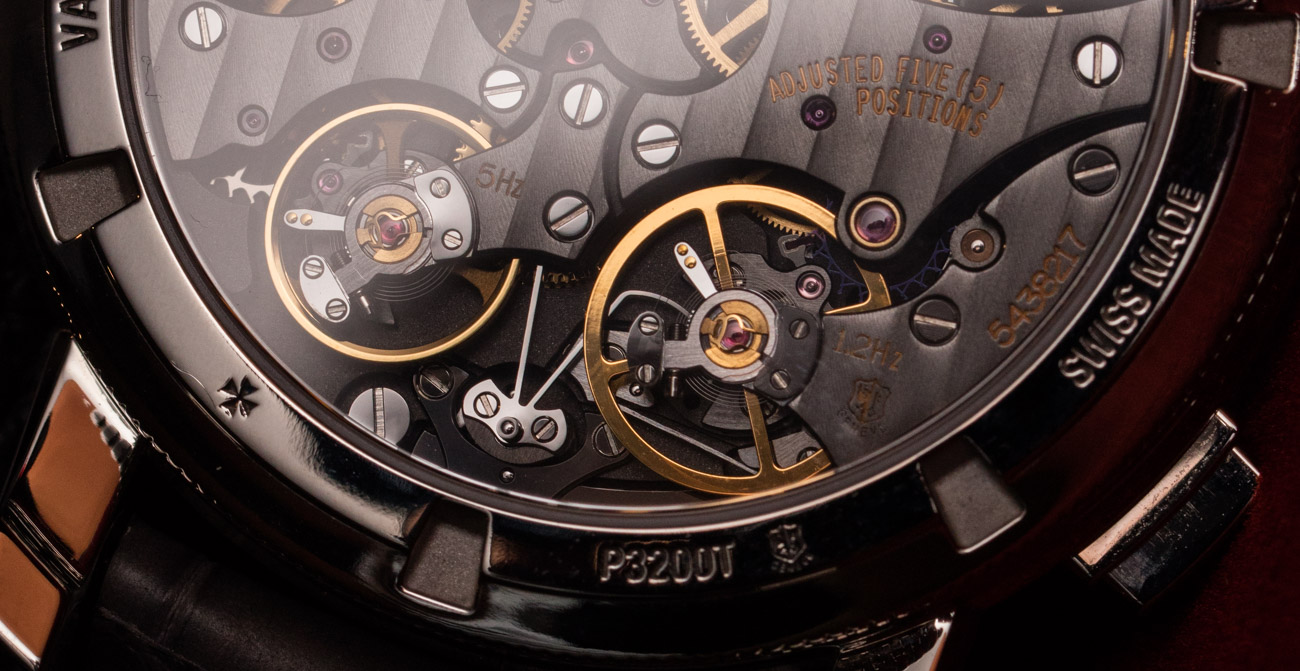 1.2Hz is actually enough to keep the watch movement relatively accurate, assuming the movement isn’t subject to any shock or vibration. A higher-frequency movement means that errors in rate-keeping will be better averaged out over time. A watch that is moving around all over the place while on your wrist has more rate errors than one sitting statically on a table. So, the idea is to set the watch to 5Hz mode while you are wearing it, and then manually switch it to 1.2Hz mode when you are not. The latter is especially true if you are going to set the watch down for an extended period of time. I think it is safe to say that collectors who purchase a Vacheron Constantin Traditionnelle Twin Beat Perpetual Calendar usually have a series of watches in their collection. 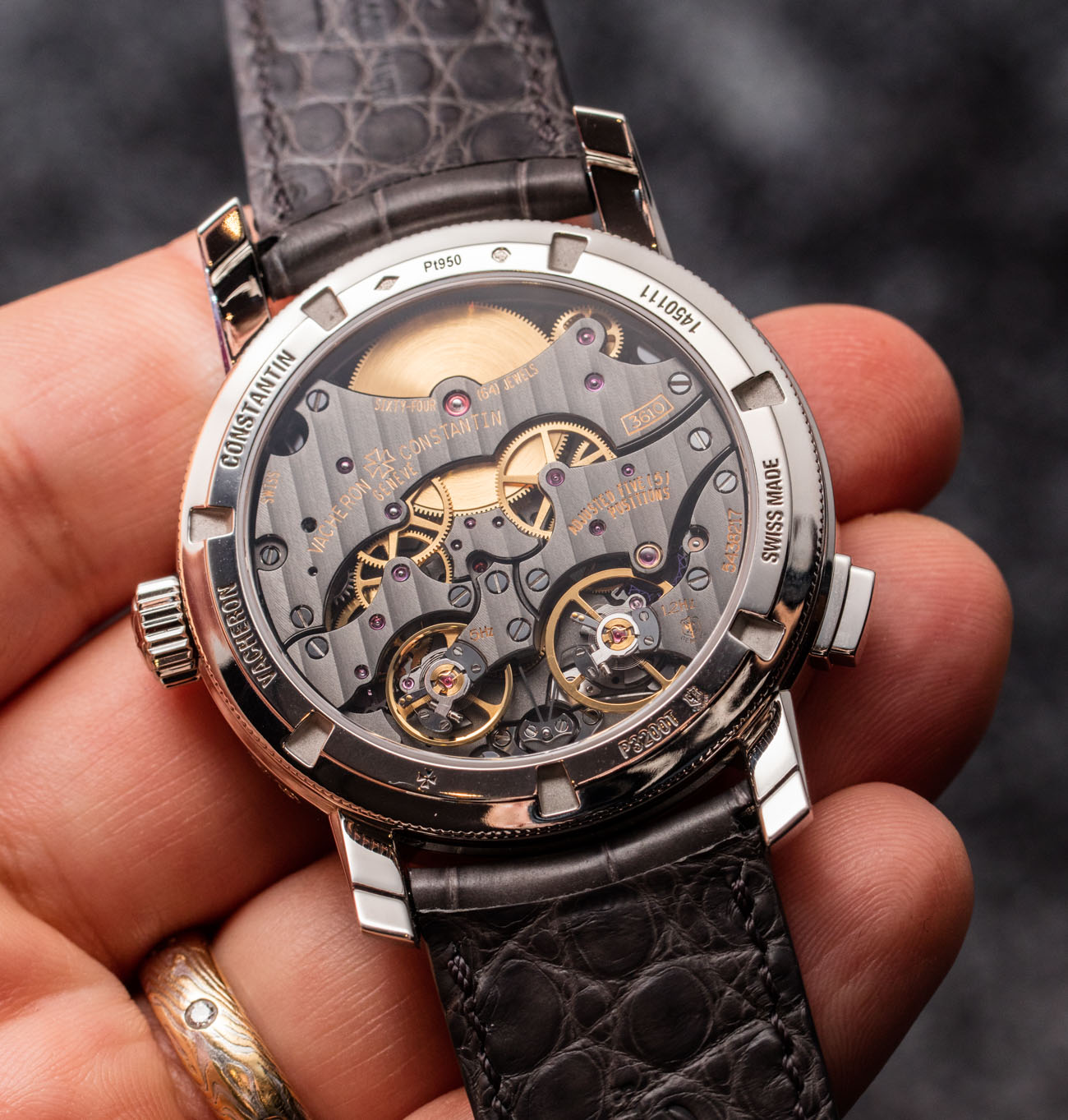 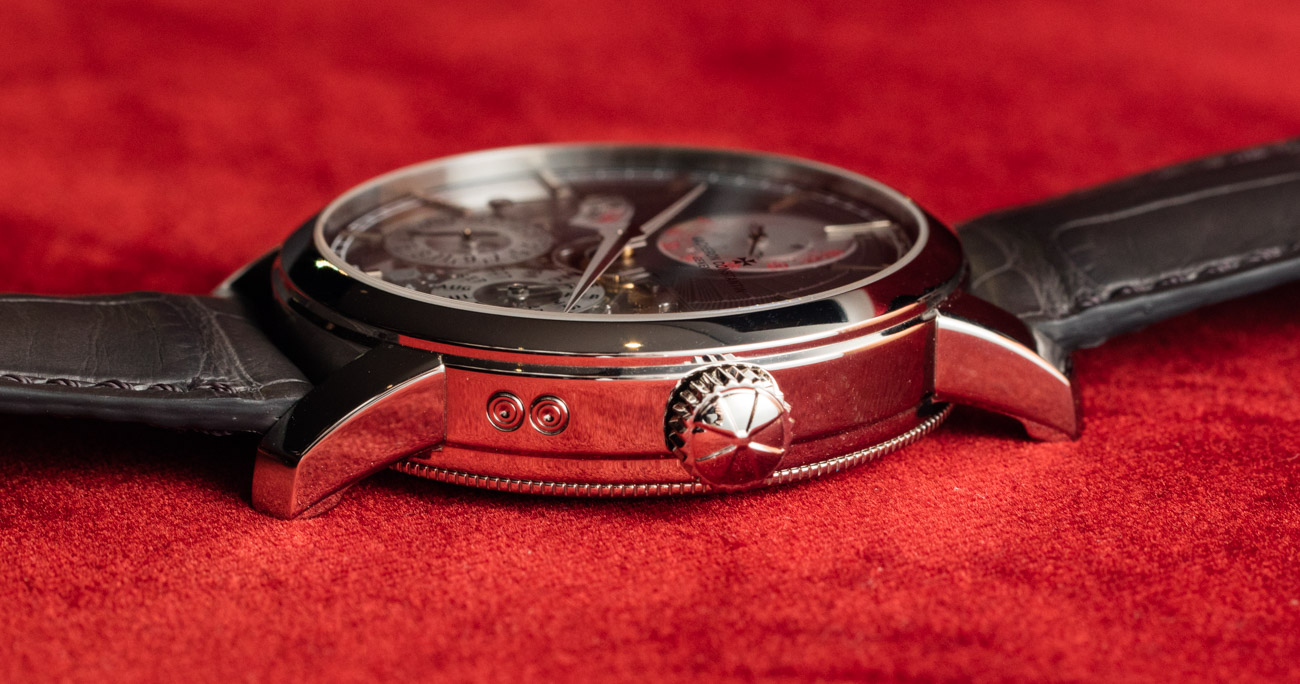 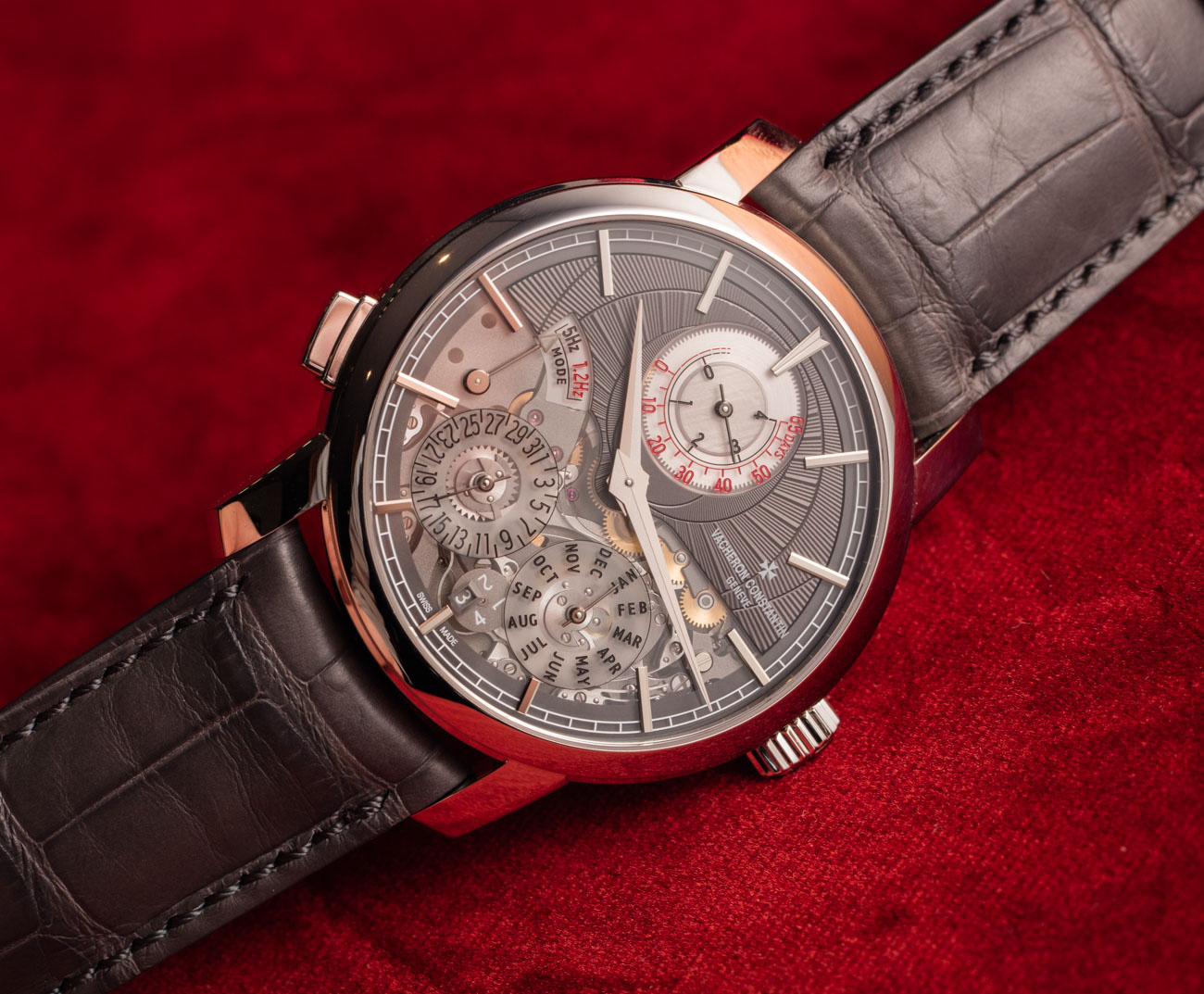 Why does one need such a long power reserve? The more complications that require adjusting (such as complex calendars and/or astronomical complication) can be a pain to adjust all the time. But the time is easy to adjust, and few people would benefit from such a long power reserve. In order to demonstrate a use-case scenario for the “active/standby” frequency modes, consider the Twin Beat movement’s perpetual calendar complication. It uses dual subsidiary dials to indicate the date and month, while a more discreet leap-year indicator is sandwiched between the two on the mostly skeletonized display. 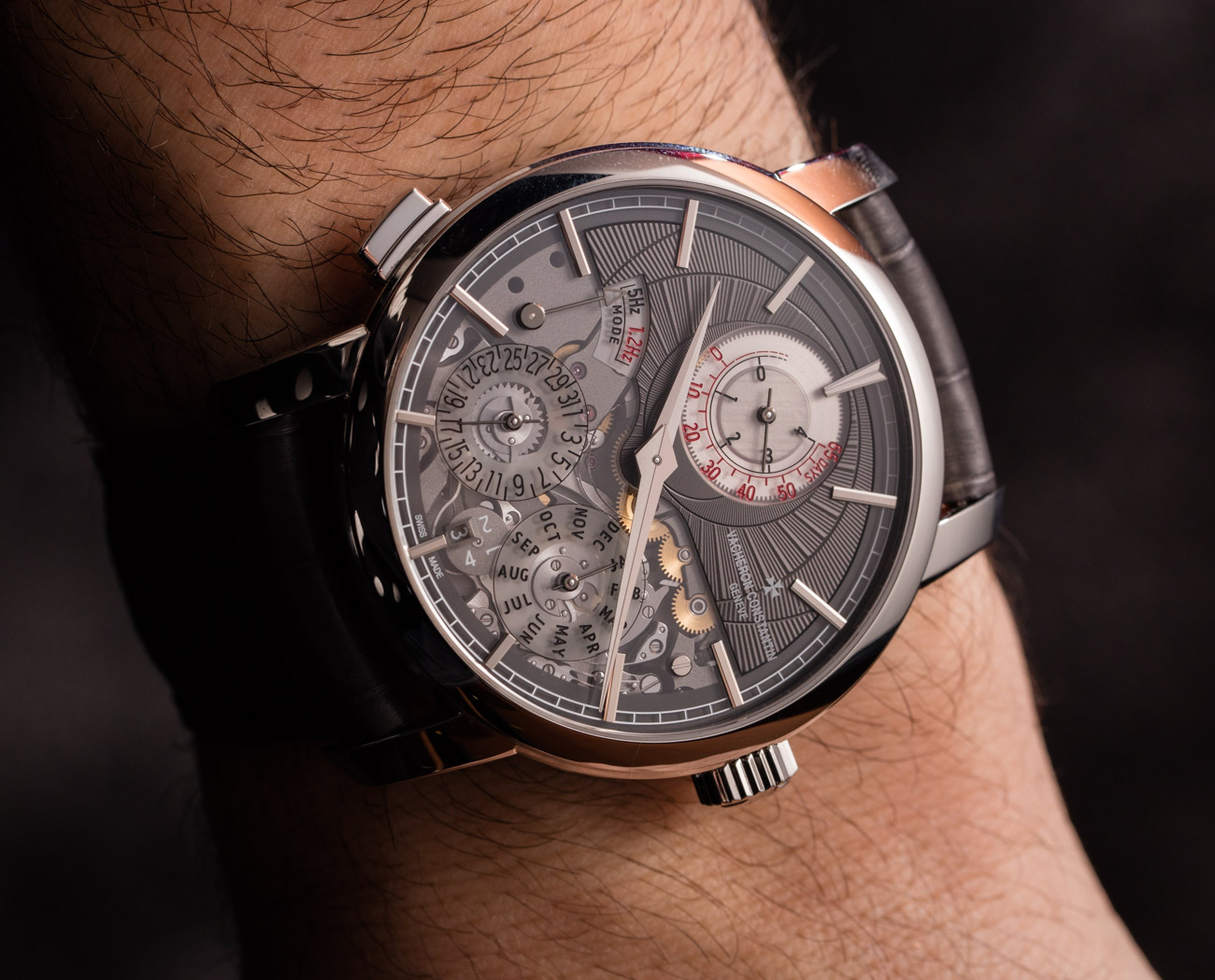 Not everyone feels that the Twin Beat’s dial is a looker; while all agree that the system is innovative, the visual design is not for everyone. Clearly, Vacheron Constantin offers more elegant and refined displays, with the Twin Beat actually looking more modern than the majority of other watches in the Traditionnelle collection (and such design cues from the brand aren’t unprecedented). 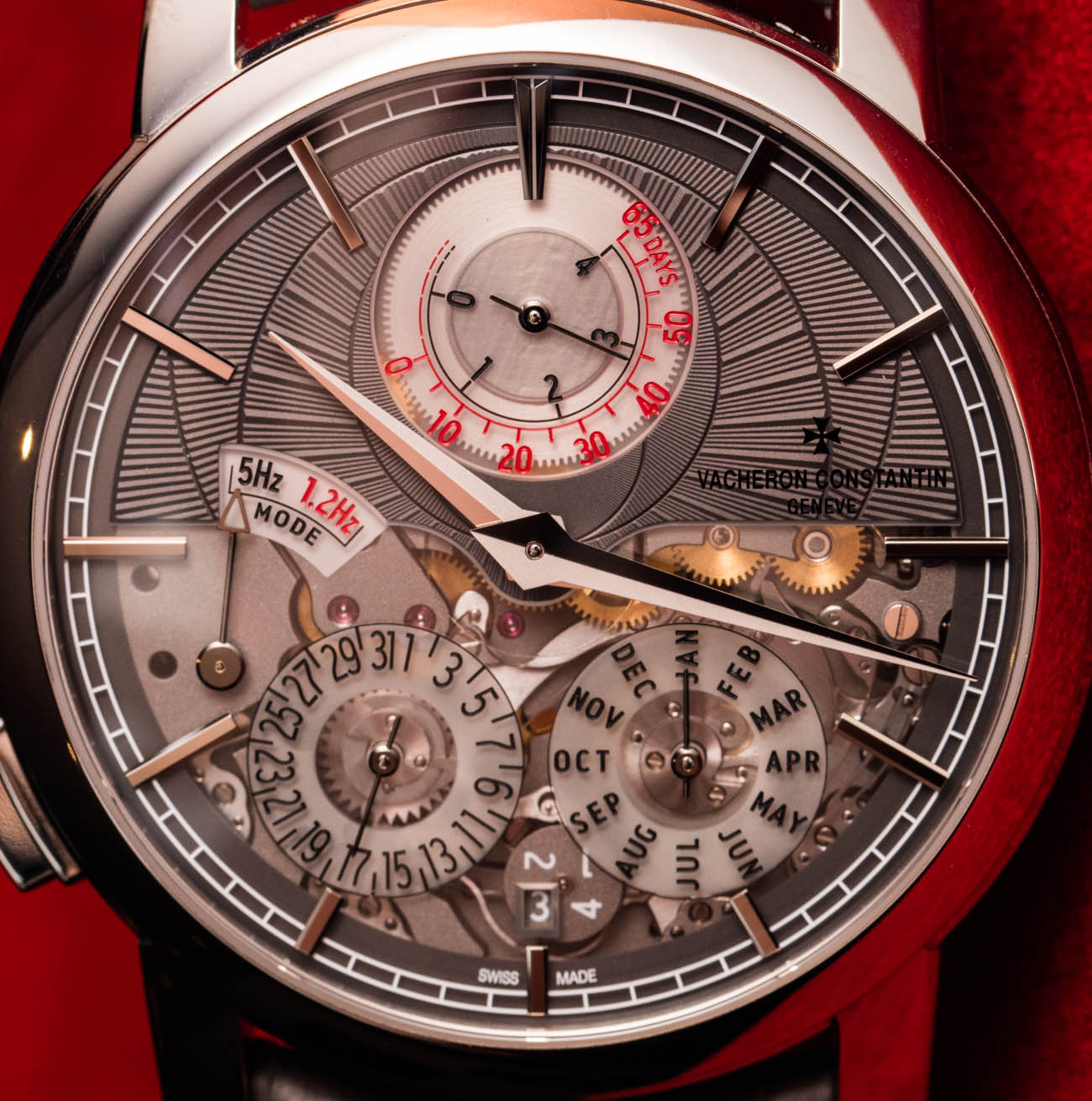 What I like about the dial is that the Traditionnelle-style hands and dual-finished dauphine-style hands are legible over the mostly skeletonized dial. This makes reading the time easy and the look into the operational parts of the movement is attractive. At 42mm wide and 12.3mm thick, the solid 950 platinum case still wears comfortably, and like a dress watch. I agree with Vacheron Constantin that one of the highlights of the product is fitting this novel movement concept in a case that no one would consider too large.

Many people have safes, or at least drawers, where timepieces they wear more occasionally can sit for long periods of time between wear. What collectors often find is that they grab watches to wear that require the least time fiddling with (setting) before they can leave the house. I think Vacheron Constantin’s goal was to experiment with a high-complication watch that was appealing for collectors trying to decide what to wear on any given day. The brand envisions owners picking up the watch, seeing that it is still operating, and then perhaps only adjusting the time by a few minutes before strapping it on their wrist. If the perpetual calendar settings were off, then there is a good chance the collector might opt for another watch to wear that day. It is this exact reason that so many collectors prefer timepieces without the date. 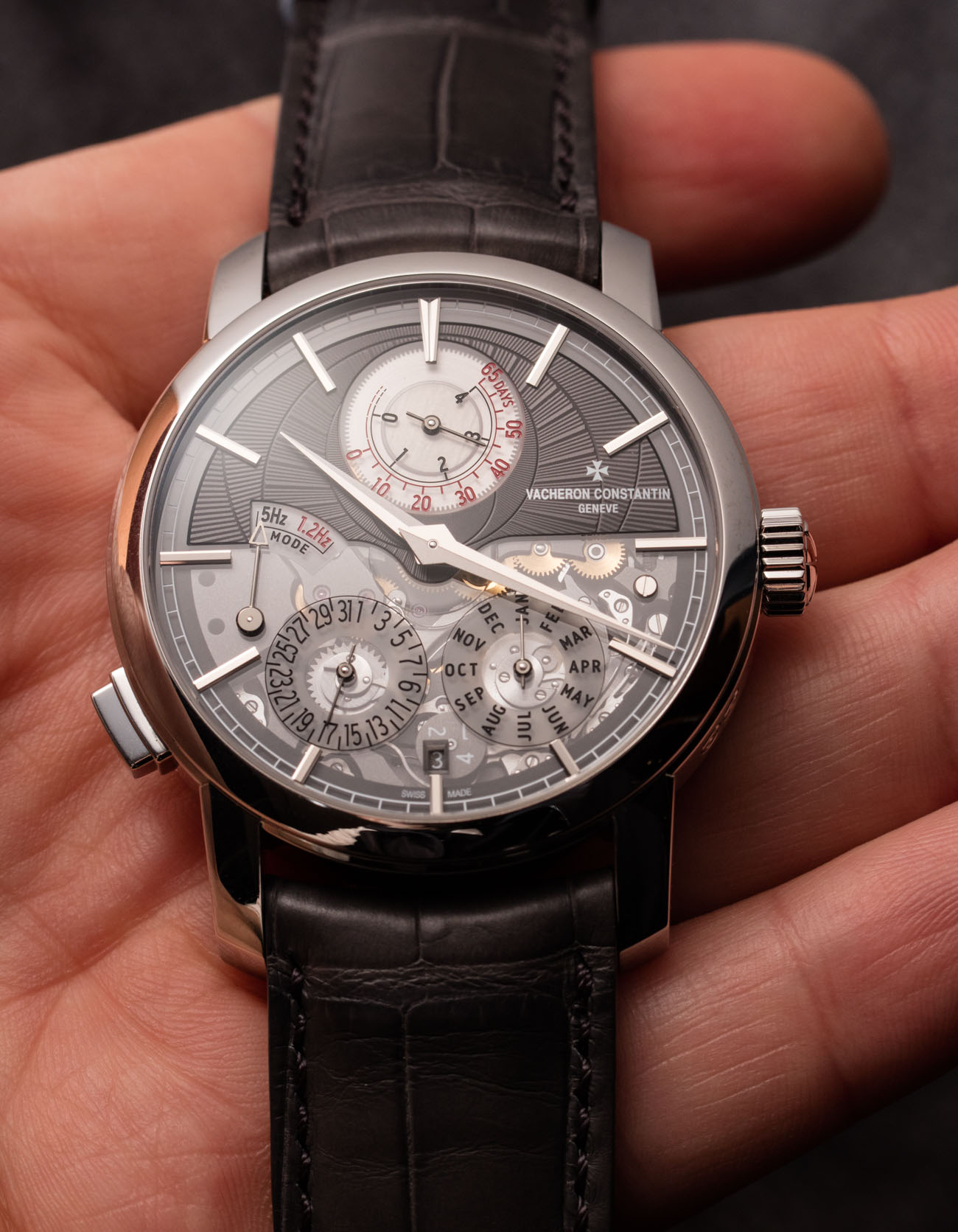 Strictly speaking, the Twin Beat system isn’t necessary, and it won’t revolutionize the industry. It is, however, novel, and unlike any other system I’ve seen before. I would say there is a good chance the movement designer was inspired by modern consumer electronics — which is a fun story as applied to the development of a mechanical watch. It just goes to show how you can teach an old dog new tricks. Not produced as a limited edition, the Vacheron Constantin Traditionnelle Twin Beat Perpetual Calendar watch will still be an exclusive model made in select numbers. Price is $199,000 USD. Visit vacheron-constantin.com to learn more.