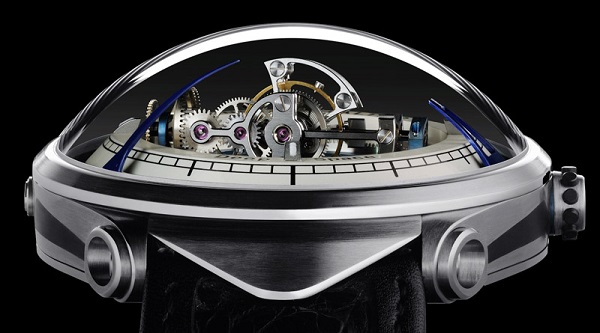 Vianney Halter gained famed for his unorthodox design and arguable creation of the high-end steampunk watch market. A known science fiction junkie, Halter’s mixed reputation in the watch industry ranges from positive concerning his vision, to negative concerning his follow-through in “completing” his work. After many years of relative silence (about seven), Halter returns with a new watch called the Deep Space Tourbillon that is a less than subtle homage to his love of Star Trek.

Specifically, the Deep Space Tourbillon watch is meant to look much like the Deep Space 9 space station from the Star Trek series with the same name. Halter even borrowed the name from the fictional vessel for his watch, and the station’s large curved spires show up in the watch as hour and minute hands. The center part of Deep Space 9 is here produced as a triple axis tourbillon, and in all, the timepiece looks like a 1950’s era UFO. For sure, the watch sums up Vianney as a person and as a watchmaker, but was it worth the wait? 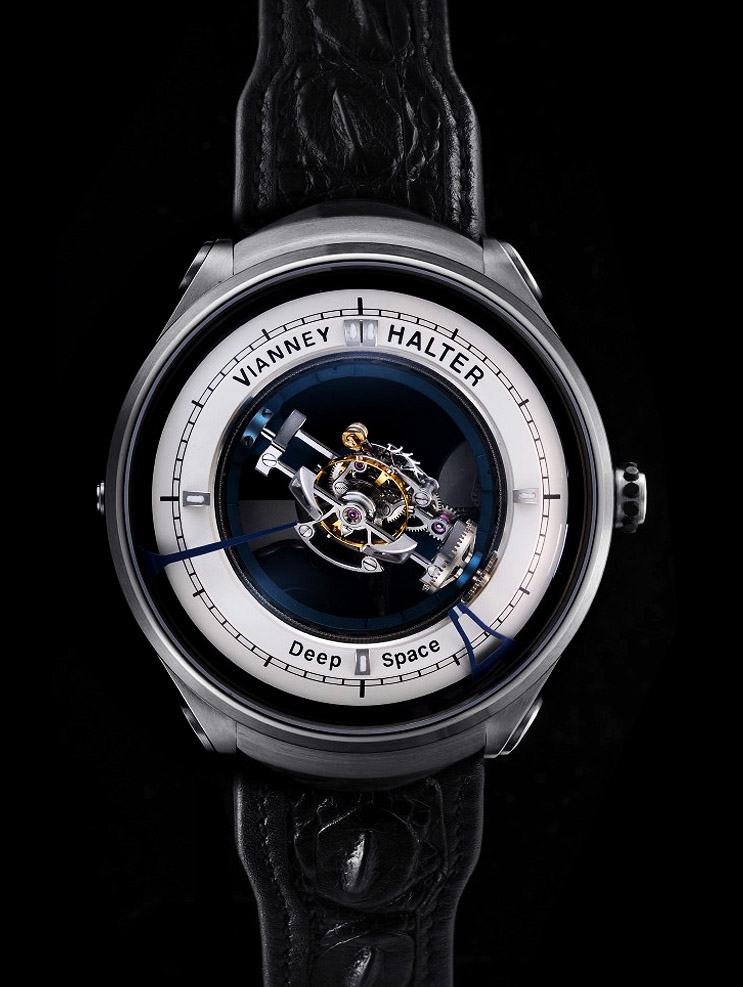 Seven years is the same time it took for Harry Winston to complete the Vianney Halter designed Opus 3 watch. Halter reportedly never got the watch to work, so Harry Winston hired Renaud and Papi to finish it. The solution was actually relatively simple, as all it needed was a decent constant force mechanism to turn all the discs at the same time, but the project was left sitting around for that long. While a triple axis tourbillon is impressive and hard to build, from a technical perspective it is more about being tricky to assemble, than to design. While the Deep Space Tourbillon surely satisfies its (space) mission, does it satisfy as a “Vianney Halter?”

What put Vianney on the map was his Antiqua watch collection. The beautiful steampunk creations were nice enough to overcome early production problems and find homes on enough wrists. Indeed, Vianney was able to satisfactorily shake up a stodgy market with a novel creation and displaying to the watch industry that pop culture was actually a great source of inspiration for high-end timepieces. For that Vianney should be thanked and credited. Finally, watch designers felt free to innovate beyond designs that were hundreds of years old. But after an initial rush of success, it is a shame Halter didn’t run further with it. 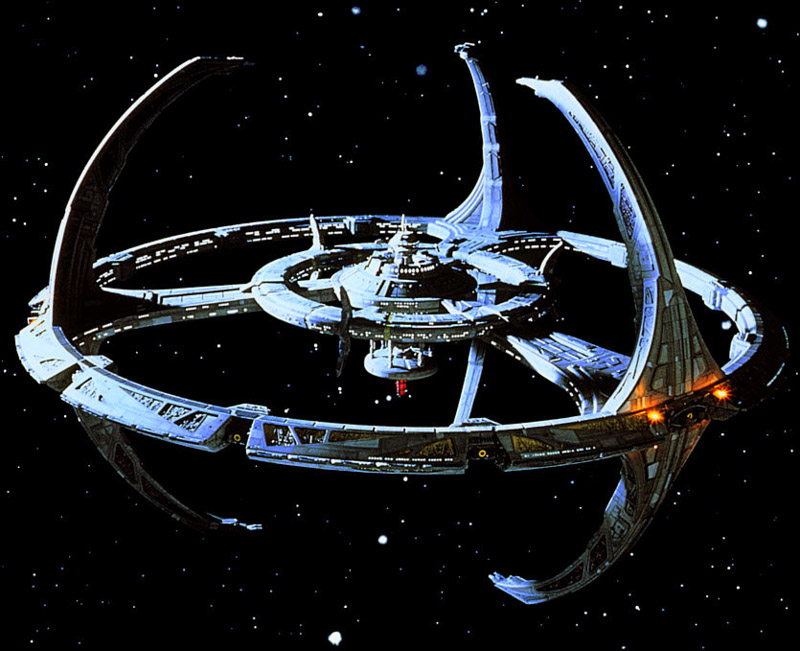 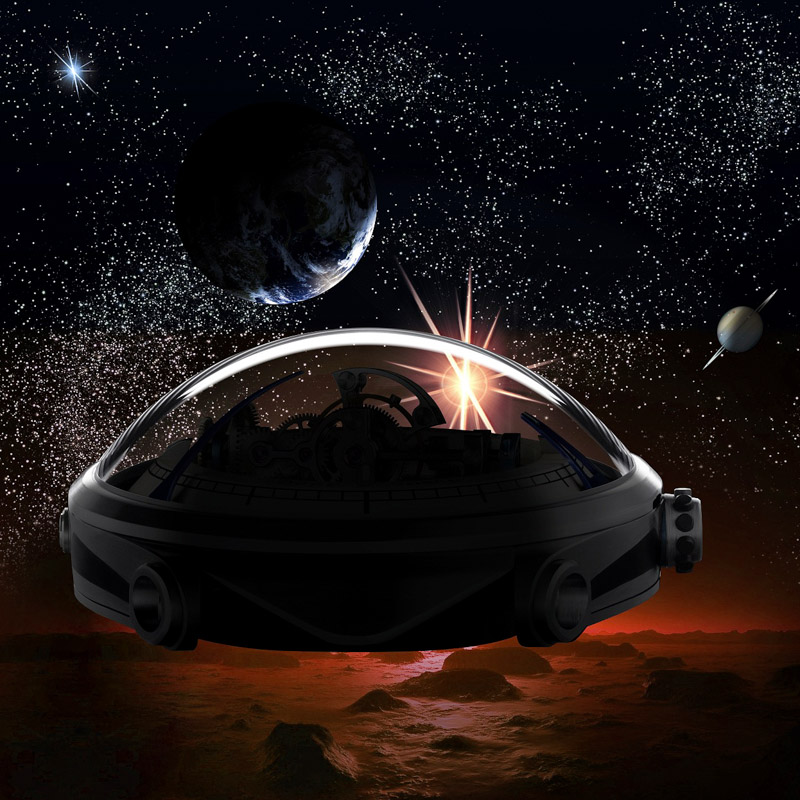 The Deep Space Tourbillon is not exactly innovative in terms of design. For me, it looks like a combination of Bernhard Lederer’s Gagarin Tourbillon and complex tourbillons from Girard-Perregaux, Thomas Prescher, and Greubel Forsey. Of course those are great houses to emulate, but I simply wanted to be a bit more wowed after all these years waiting. I did get to see the Deep Space Tourbillon hands-on after meeting with Halter at Baselworld 2013. He didn’t let me take photographs, but I got to see the real deal in action. The 46mm wide titanium case is very pretty, but reminded me more of the Gerald Genta (Bulgari) Gefica (look at the crown first) more than anything Vianney has introduced in the past.

On the wrist, the Deep Space Tourbillon is rather tall because of the larger domed sapphire crystal. That is OK given the concept and design. Many of Halter’s previous watch cases were more interesting, but there is sufficient detailing on the case and, in titanium, it wears light enough. The tourbillon cage and components are also in titanium, which is the de facto material of course for these weight-conscious applications. The tourbillon consists of a few spinning elements. First is the tourbillon itself in the middle of the watch that spins once each 40 seconds. Central tourbillons are on the rare side, so that helps make the Deep Space Tourbillon unique. 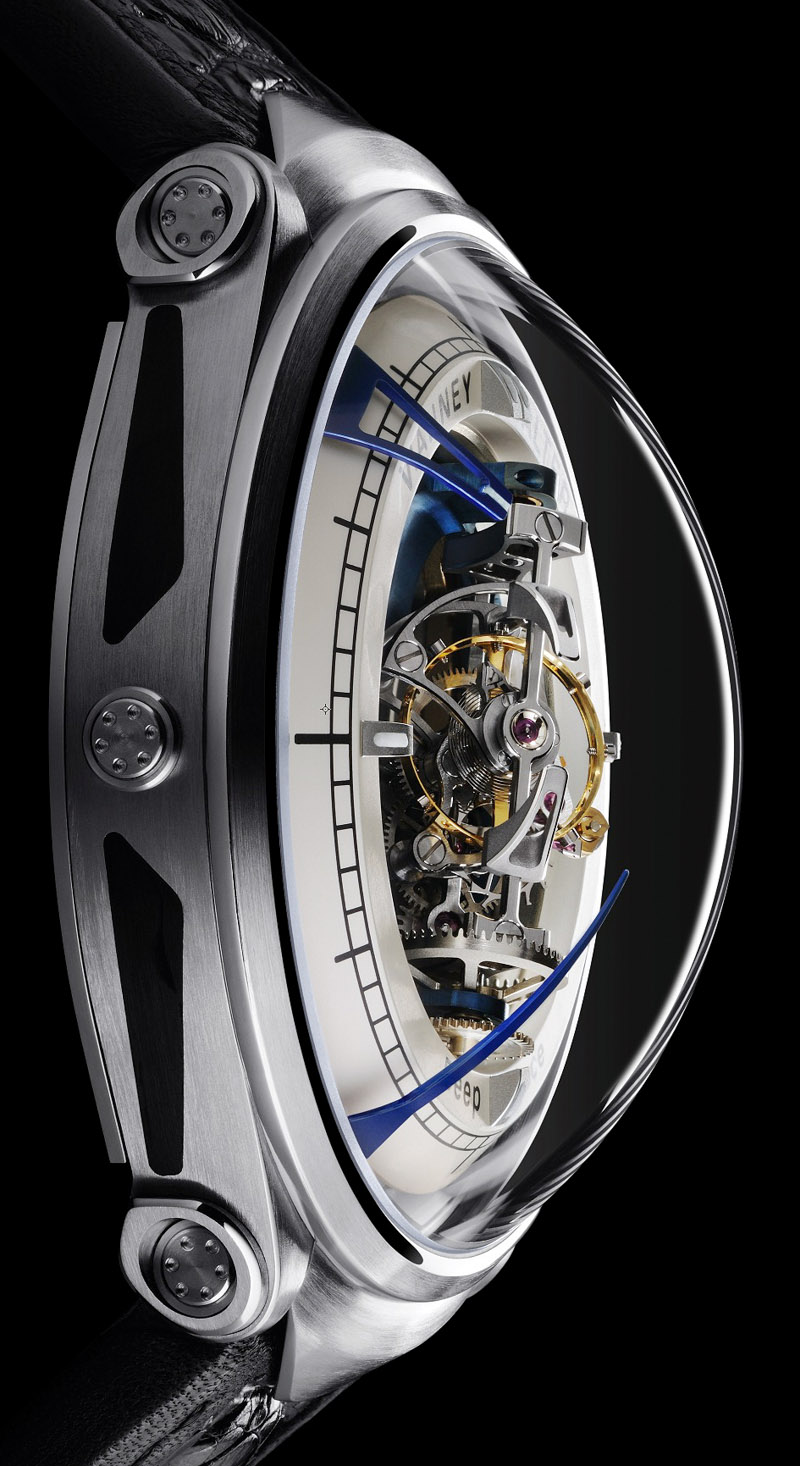 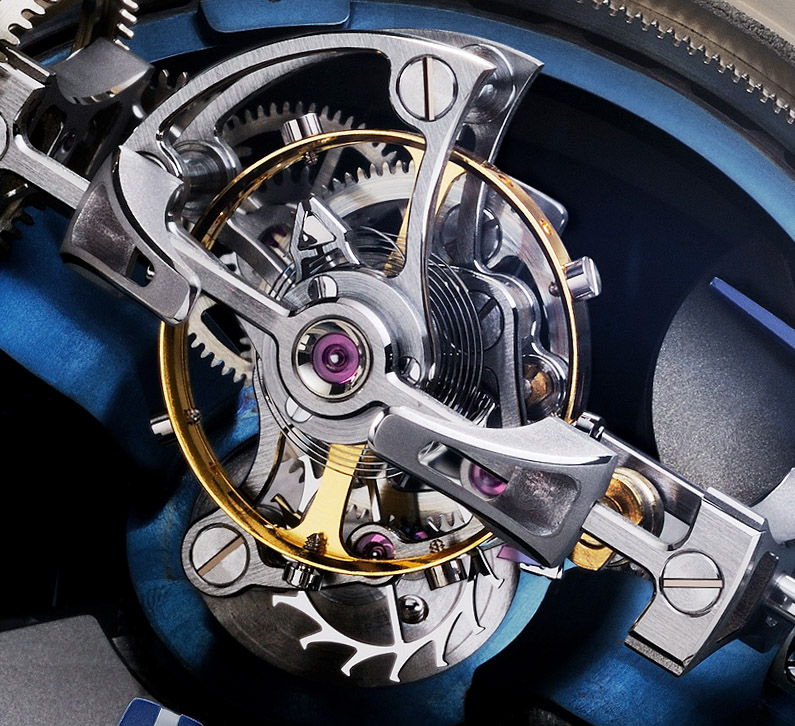 The spinning tourbillon in the center is the first axis point. Next, the entire tourbillon shaft spins around on its axis, providing the second axis. This spins once each six minutes. Last, the entire mechanism spins horizontally in the middle of the case each 30 minutes offering the third axis point. While only the initial tourbillon cage spins with appreciable speed, the entire movement is technically a triple axis tourbillon. A black movement plate behind the tourbillon offers the illusion of emptiness behind the mechanism, but offers space for the rest of the movement where elements like the mainspring barrel are located (55 hours of power reserve). The movement itself is called the caliber VH 113 and it operated at 3Hz.

Time is indicated by two blued hands that curve into the dial. The longer one is for the minutes, and the shorter is for the hours. Lume seems to be applied to the hour hand and four of the hour indicators. Though oddly the minute hand seem to be devoid of any lume. I suppose by just looking at the position of the hour hands you could estimate the time within 30 or so minutes in the dark. Few of Halter’s timepieces would boast terribly good legibility, but some are better than others. Just don’t kid yourself that wearing this watch is for telling the time. You’ll be glancing at the delicate tourbillon and then to your phone to see what time it is. 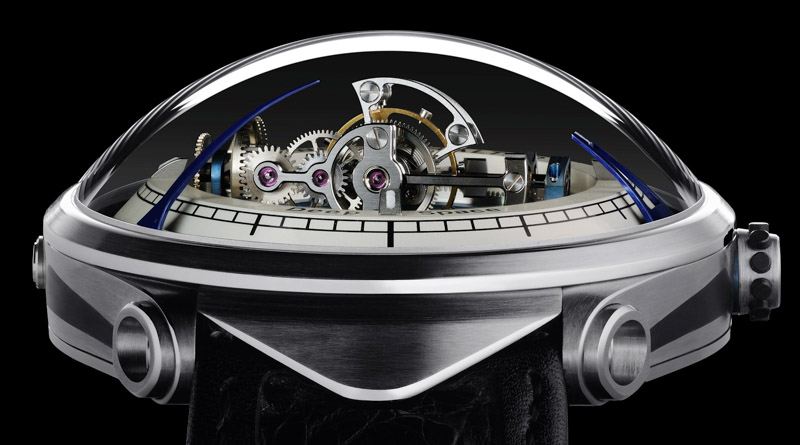 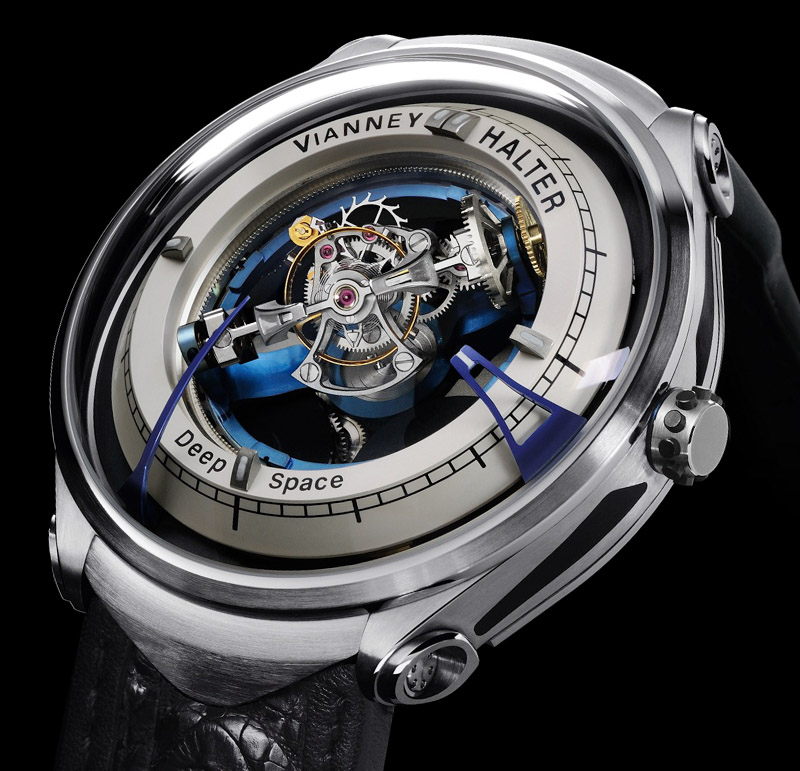 While not wholly original, the Deep Space Tourbillon is nevertheless a good looking watch aimed at seasoned watch enthusiasts. The label of “Deep Space” on the dial is a reminder of what Halter was inspired by, and in his own words he just relaxed and watched science fiction during many of the years he was not working. Watch enough classic Star Trek and you are bound to create a watch like this. For more, you can seen some “live” images of the watch from our friends at Watchonista.

Even though the Deep Space Tourbillon is a nice looking exotic watch, it won’t have the same effect as earlier pieces like the Antiqua. No matter, given Halter’s almost zealous followers who have been waiting so long, this piece will sell as he has traveled to Asia in order to debut the piece. Sadly, Vianney Halter will not once again disrupt the market or create something truly memorable here that people will be thinking about. The concept just isn’t original enough, but perhaps with Vianney off the couch he will find new inspiration once again. Price for the Vianney Halter Deep Space Tourbillon is 180,000 Swiss Francs. vianney-halter.com