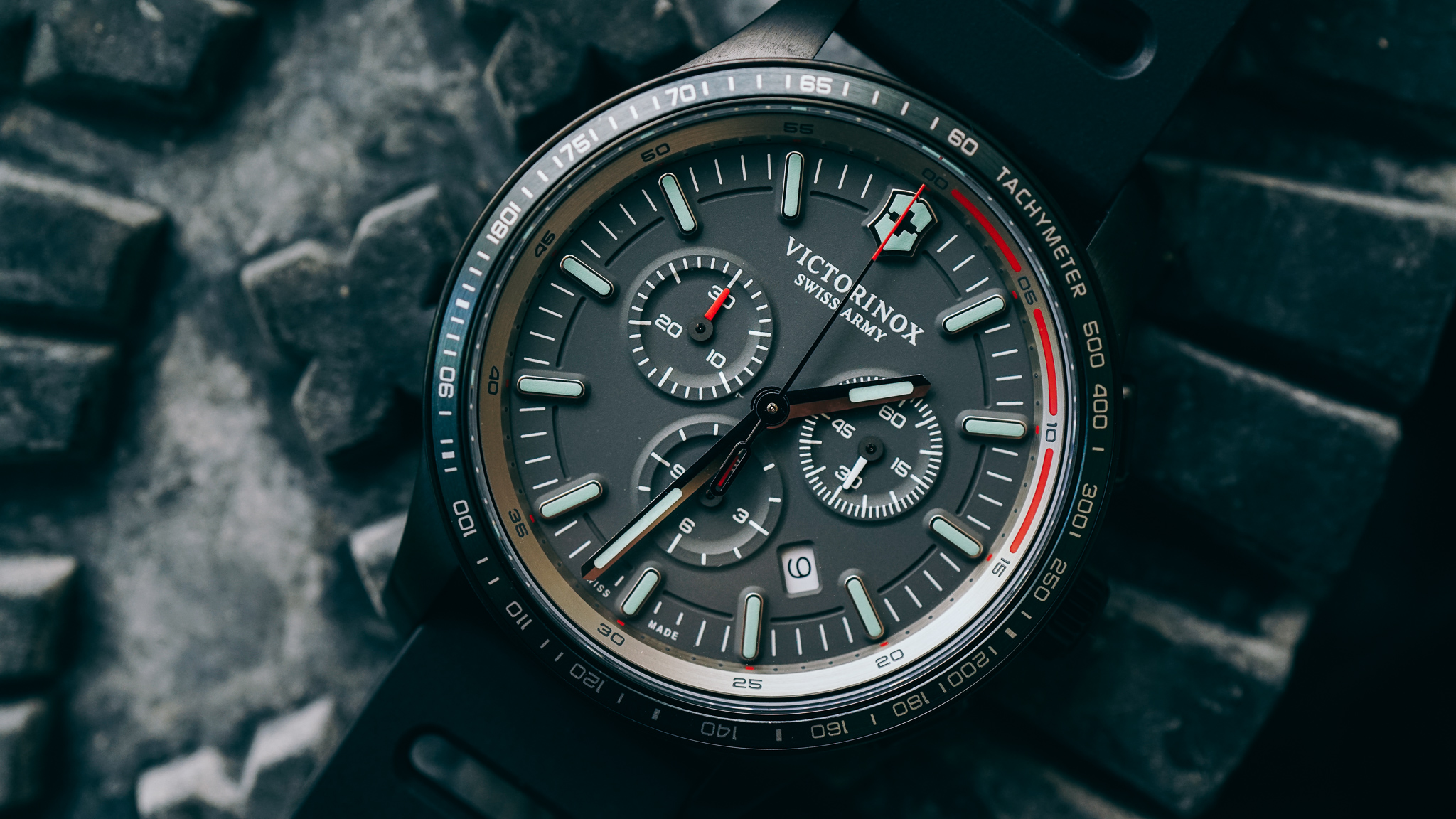 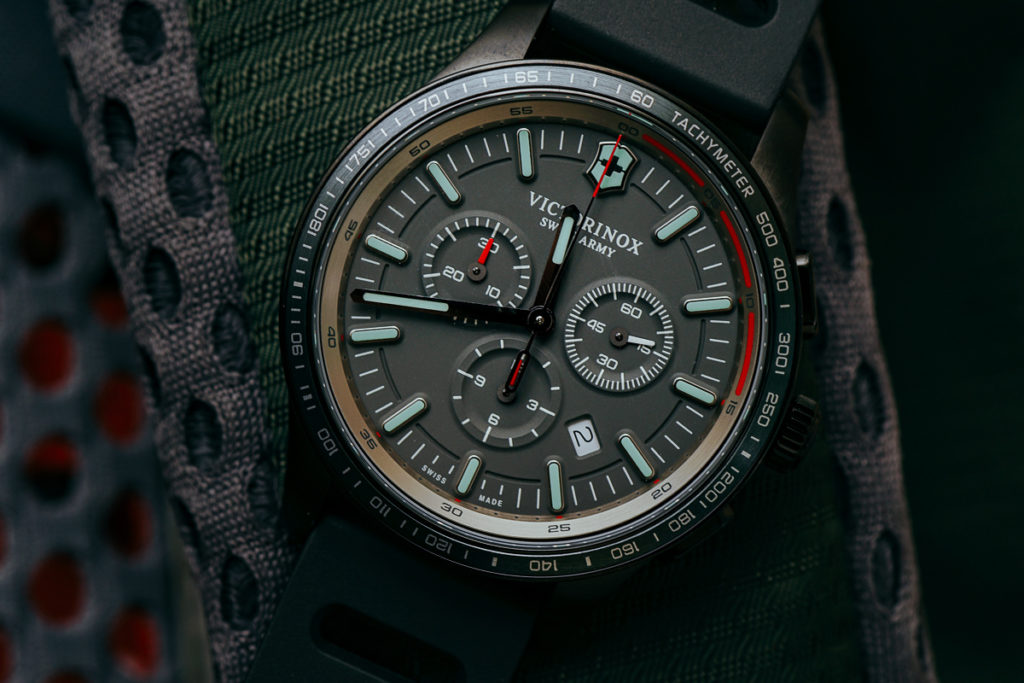 I’d already been ‘into’ watches throughout high school and college, but my search for that first “nice watch” after entering the professional world ended with one from Victorinox Swiss Army. Dutifully following the advice of a well-informed friend, I had a very specific checklist of what to look for: “Sapphire crystal. 316L stainless steel. Automatic movement if you can afford it, Swiss-made quartz if not.” I couldn’t, so after many weeks in the rabbit hole consuming whatever information was actually available at the time on quality Swiss-made quartz watches, I sprung for a VSA Divemaster 500, wooed by its bold, “ice black” PVD case and deep-diving capability, as well as its myriad of dial textures topped with creamy green Super-LumiNova. 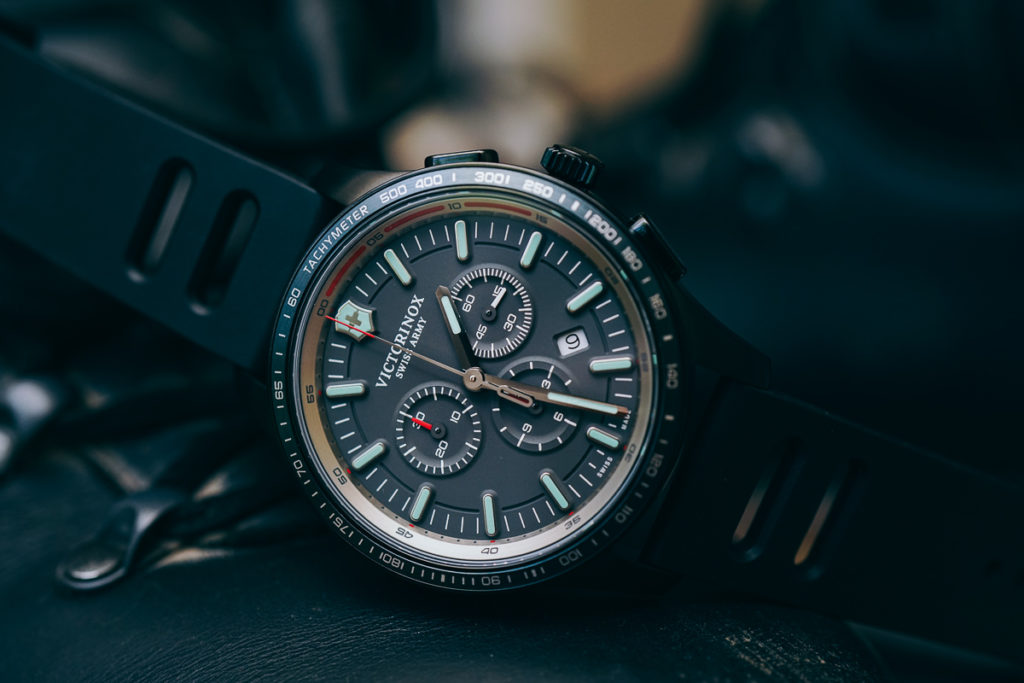 After nearly a decade of hard wear, that watch now sits in a drawer, needing a new battery and crown tube, but it still brings a smile to my face, as it represents a personal flag in the sand marking my first real entry into the hobby. So when the VSA Alliance Chronograph landed on my desk, something about its icy dark case, matte grey dial and cool green accents again struck a familiar chord, reminding me of that time spent perusing forums and reviews, and the resulting thrill of finding ‘just’ what I was looking for. By the same token, perhaps a few words on this excellent new Victorinox will find their way to another new watch fan looking for a markedly well-made and handsome quartz chronograph for a hair under 500 bucks. 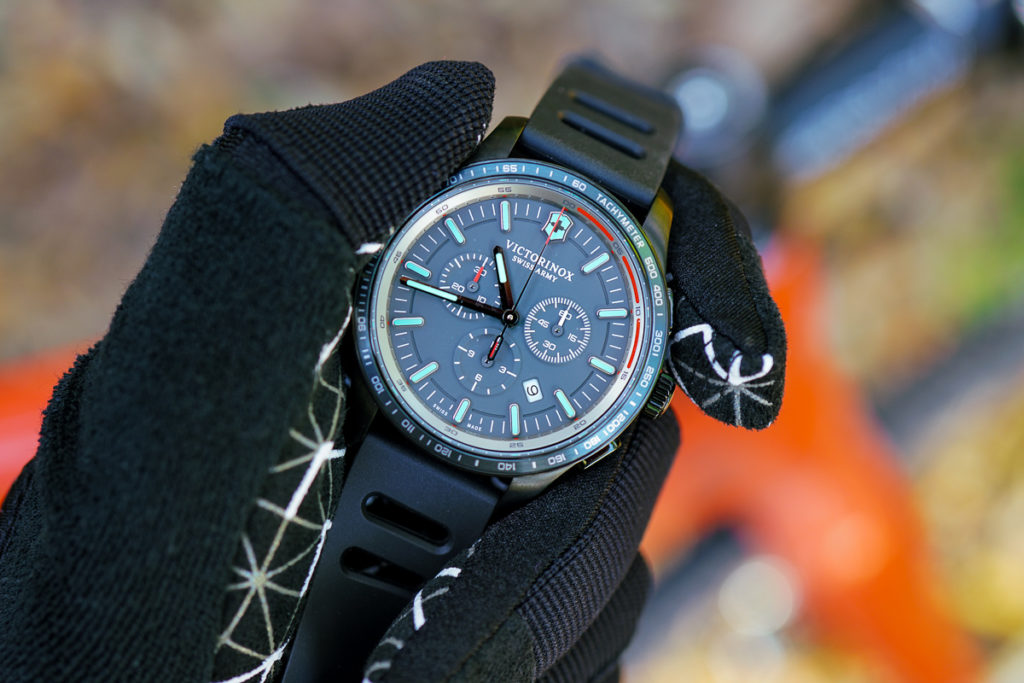 The Alliance Sport Chronograph isn’t an anomaly – there’s certainly no shortage of well made and similarly-priced quartz chronographs powered by high-quality Swiss or Japanese-made movements. The Bulova Lunar Pilot Chronograph, the Certina DS 2 Precidrive, Tissot Chrono Classic, and the Hamilton Khaki Aviation Chrono Quartz are all standouts that immediately come to mind. Even the Runwell Chronograph from Shinola could be a contender for the right buyer. But amongst the aforementioned, only the Tissot and the Victorinox officially come in under $500 – and that’s saying a lot for the VSA. 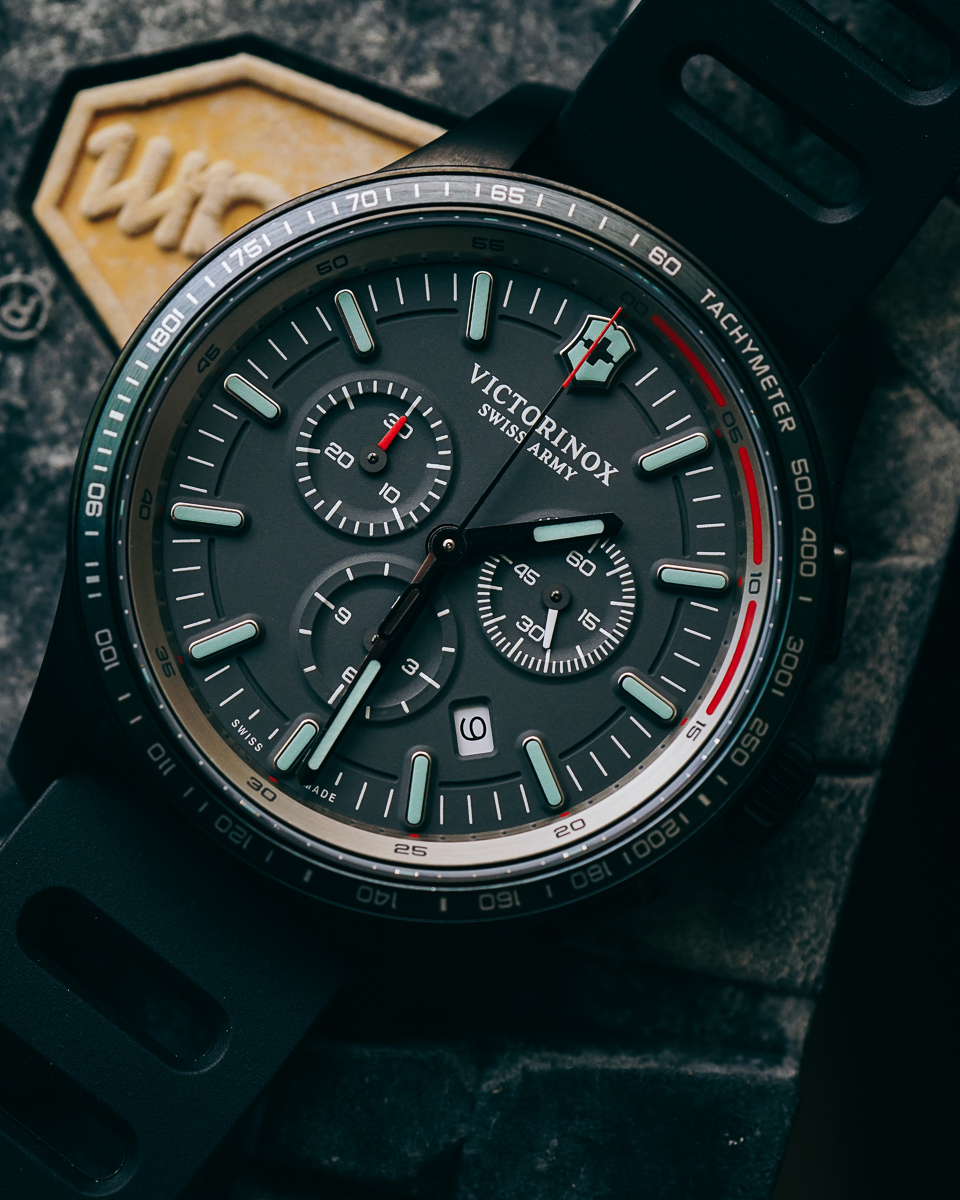 But what puts the Alliance truly in a league of its own is the downright staggering amount of detail in the dial. Take, for example, the beautifully designed, three-dimensional monobloc dial with cylindrical ridges forming each of the three registers. Along the outer circumference of the dial runs a thin, circular channel, interspersed by twelve individually formed mounds, creating a seamless foundation for each round, hyphen-shaped hour marker. Even the oft-maligned date window gets a nice bevel to add a bit more visual depth and texture. 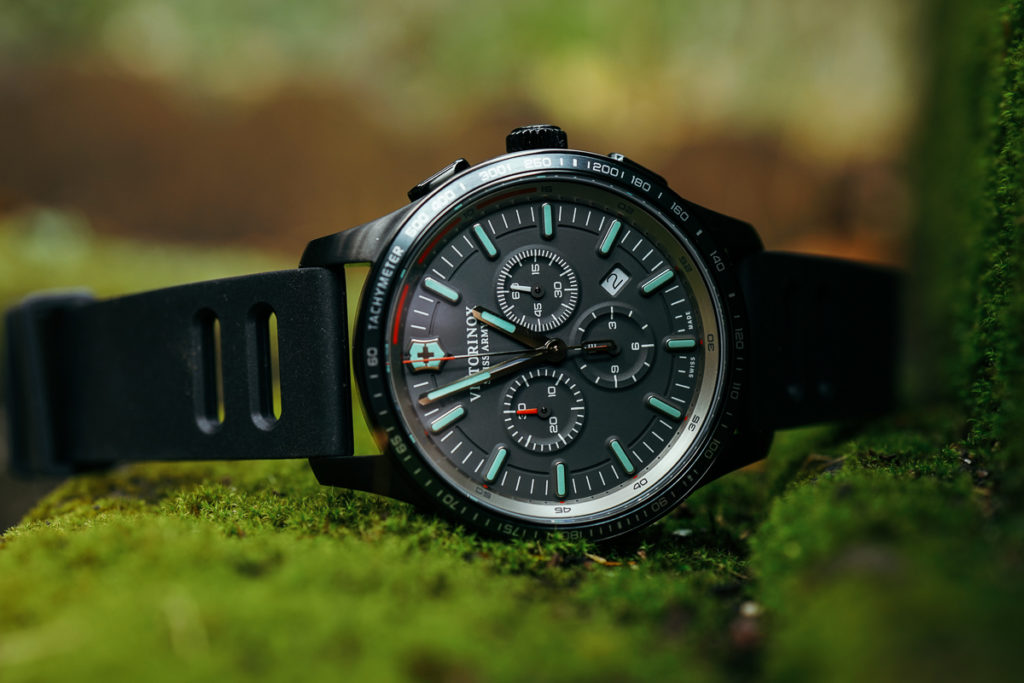 Then there’s the overall color-balance; multiple shades of grey and VSA’s signature creamy green Super-LumiNova are both contrasted sharply by sporty red indicators, then juxtaposed against a very cool polished gunmetal black case, which evokes the “ice black” finish that once drew me to the older Divemaster. Even typography nerds shouldn’t find too much to cry about here, with excellent consistency and legibility exhibited between the dial and the laser-engraved aluminum tachymeter bezel insert. It’s not just the sheer level of detail, but the quality as well – all amounting to a package that you’d be hard-pressed to find on even an automatic watch costing several times as much. 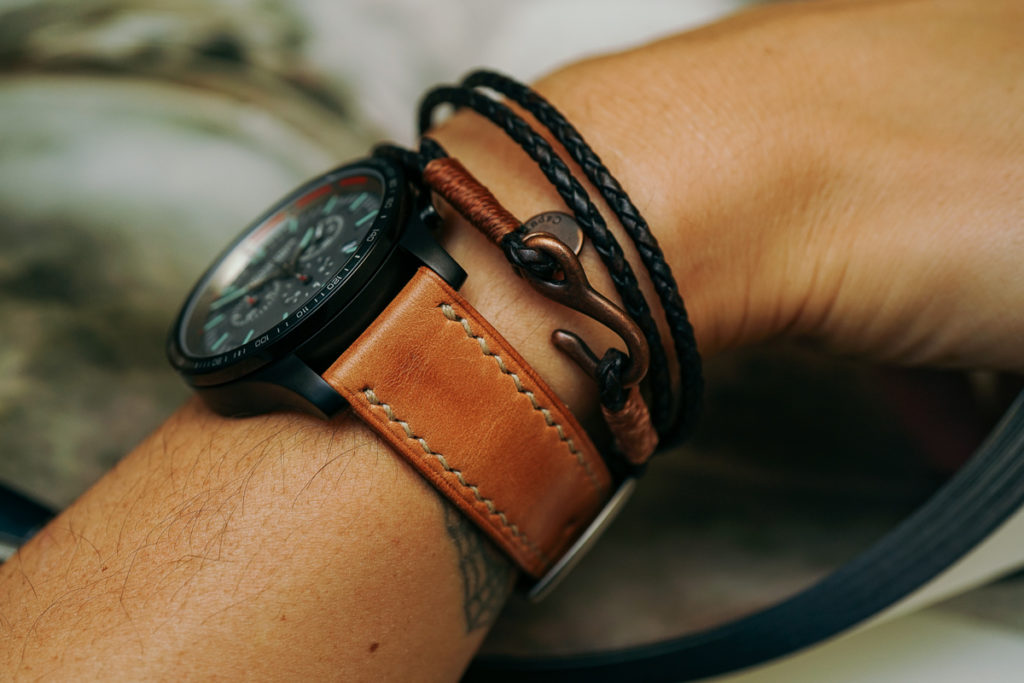 That said, it’s important to recognize that with Victorinox watches, you’re generally not paying for movement innovation – but rather some excellent dial and case quality. That’s all well and good, as it’s where the Alliance truly shines, but I’d personally be happy to pay a little more for a more interesting quartz movement. As it stands, the movement in the Alliance Sport Chronograph is a pretty standard Swiss-made Ronda 5030.D with small seconds, 30-minute, and 12-hour counters. But this could really be a fun watch with a more interesting caliber like Seiko’s VK64 meca-quartz with its sweeping center-mounted seconds counter, Bulova’s 262 kHz caliber with its 1/10 split-second counter, or a more powerful, up-market engine like an ETA 251.274 Powerdrive, which is a highly customizable and serviceable caliber also used by other Swatch brands like Certina. 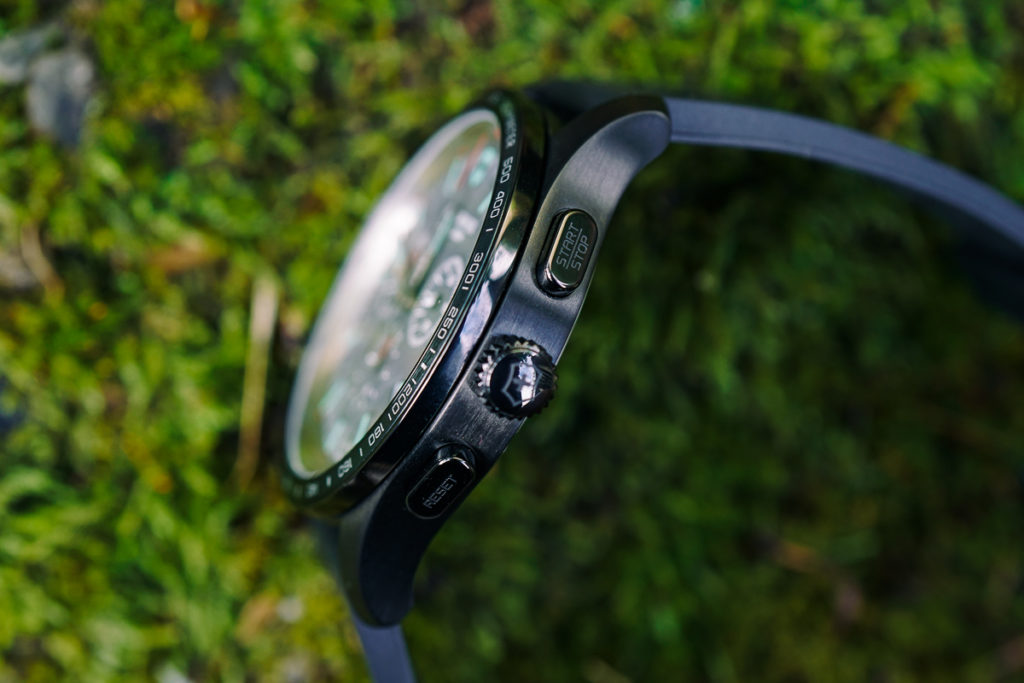 In a perfect world, we’d see a watch like this get something like ETA’s awesome 251.262 quartz chronograph movement, whose center-mounted minute counter made it not only extremely cool and useful but also markedly rare. This unique movement’s been used by Victorinox (as well as Chase Durer, Breitling, Longines, TAG Heuer, and a few others) before – most recently in the previous-generation Divemaster Chronograph – but it hasn’t been seen since, after being formally retired in 2016. 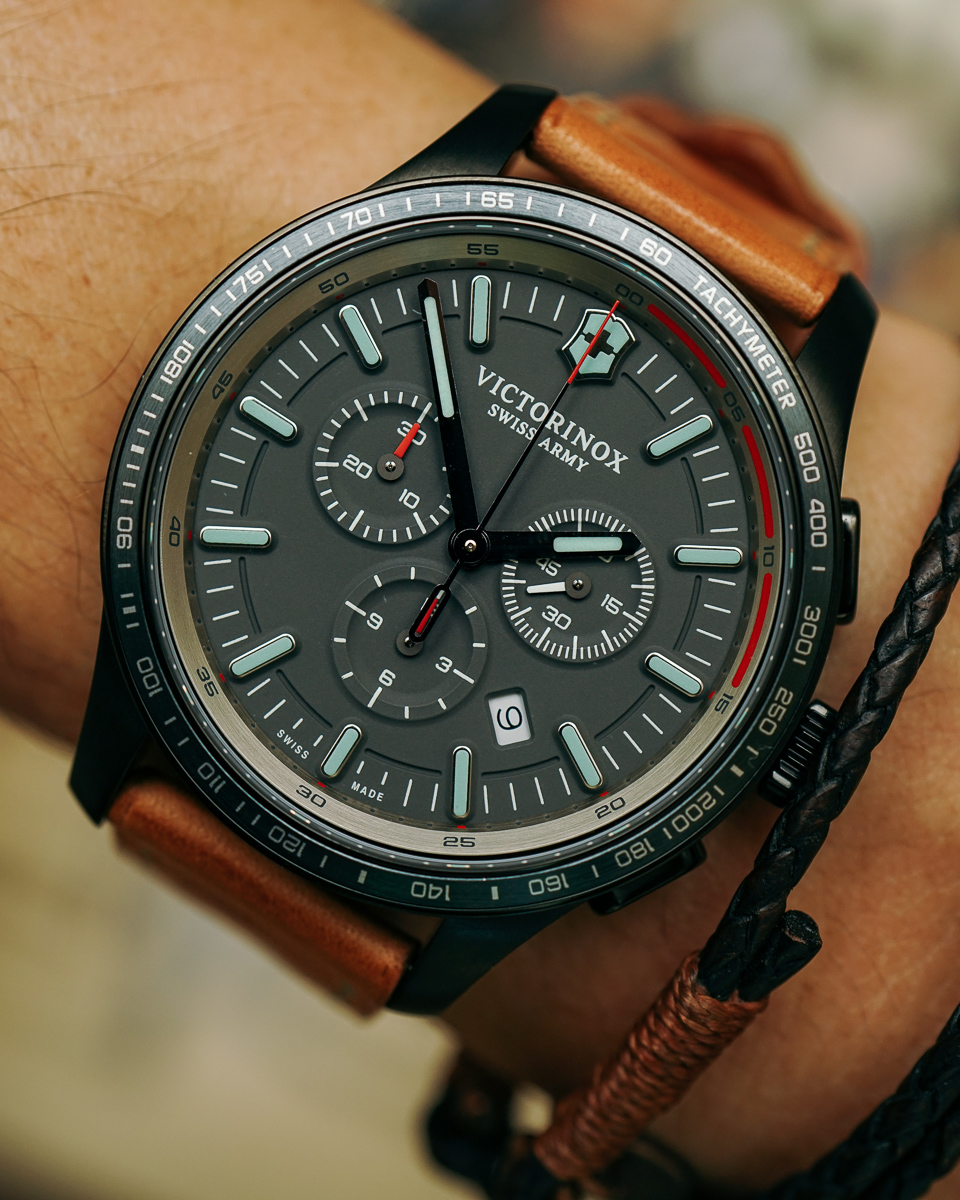 All things considered, while it’s a shame the Ronda movement being used in the Alliance Sport doesn’t offer any additional functionality beyond the basics, it does have a pretty widely documented reputation for being highly accurate and reliable. And from a design standpoint, the classic layout is accentuated by a center-mounted seconds needle hand that has a round, pill-shaped counterweight that looks a bit like a Swiss Army knife – kind of a neat visual tie-in to hour markers on the dial. Again, gripes about the features of the movement are a far cry from a legitimate complaint. It’s just that a little more movement variety here could get even dyed-in-the-wool watch enthusiasts really excited about the Alliance Sport Chronograph. 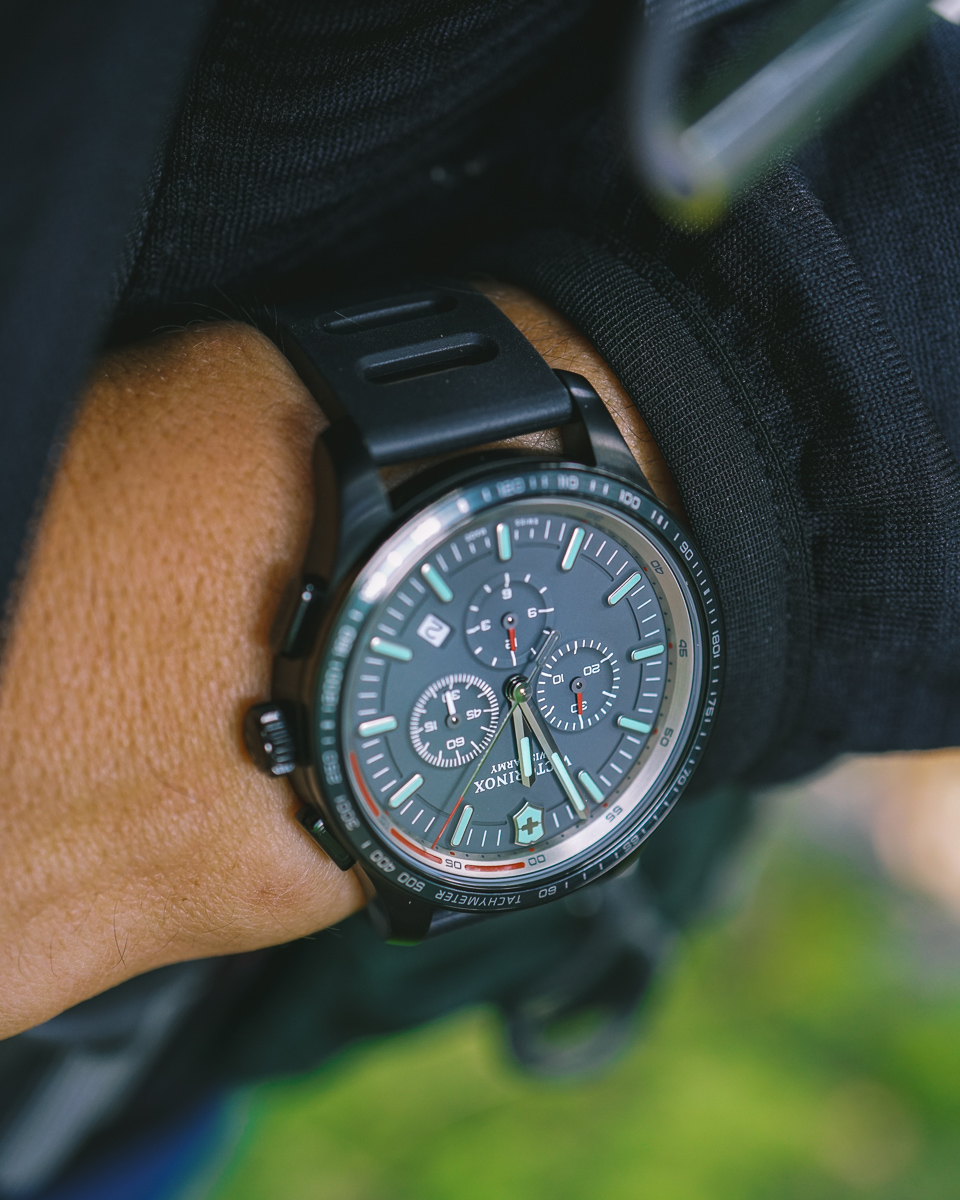 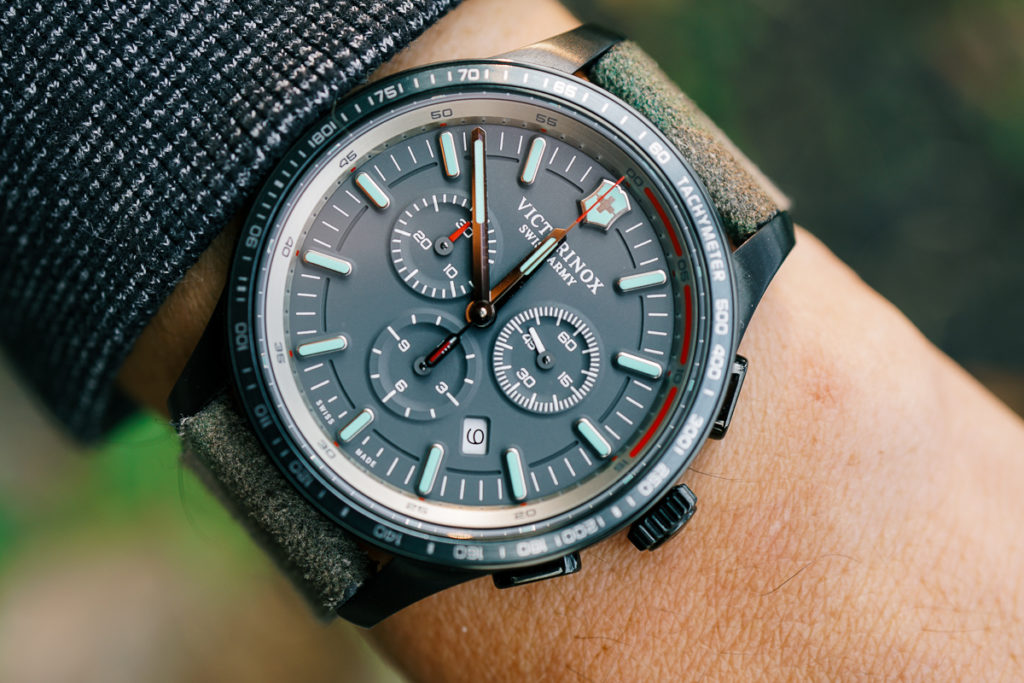 On the wrist, the Alliance’s 44mm dimensions don’t offer any major surprises. The watch wears relatively broad on my 6.5” wrist, but thin enough that it doesn’t bounce around much when subjected to the persistent chatter resonating through the handlebars of my cyclocross bike. It’s a bit of a shame that the lugs measure 21mm wide, as the Alliance Sport Chronograph’s general visual aesthetic yields a watch that’s an absolute monster on just about any type of strap (like the included rubber, leather, NATO, canvas, or whatever else you’ve got sitting in a drawer) in a huge variety of colors – including my favorite: camo leather. If your strap collection already has a few 21mm options though, you’ll quickly find a hugely versatile adventure watch that elevates the classic three-register chronograph through some very nicely rendered details, but without overdoing it. 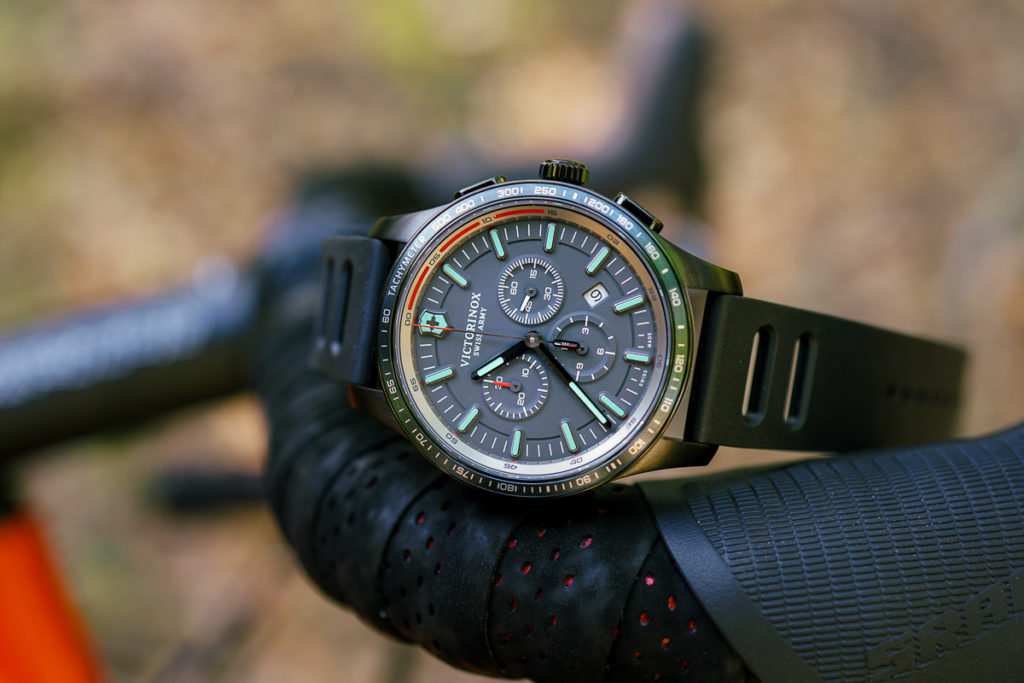 Victorinox has openly never been movement manufacture, but honestly, that’s fine – the brand plays to its strengths in visual design, and innovative case & dial construction extremely well, and nowhere is that more evident than on the Alliance Sport Chronograph. In fact, my experience with both this watch and my old Divemaster, as well as Ariel’s feedback on VSA’s bulletproof INOX Professional Diver all unsurprisingly echo the same sentiment: with a price of $495 you’d be hard-pressed to find more value, reliability, and classic design coherence for your dollar than with Victorinox – and that’s saying a lot, given the sheer amount of competition out there. Learn more about the Victorinox Alliance watch collection at swissarmy.com.