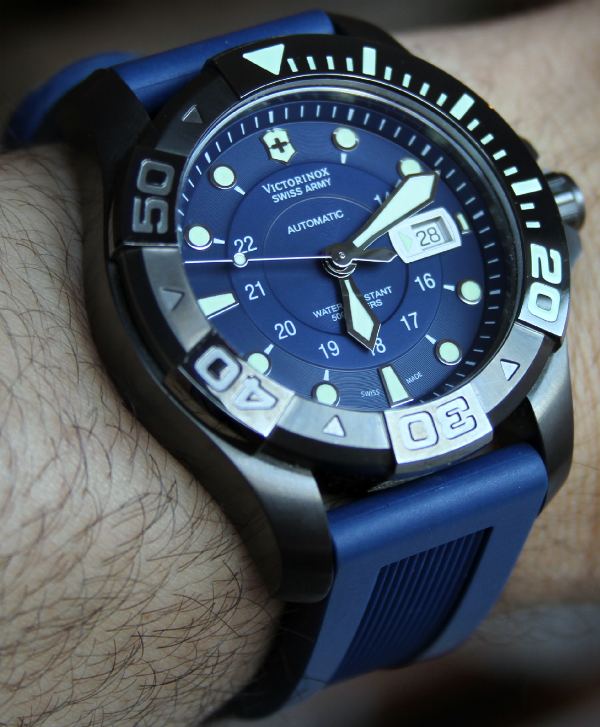 Swiss Army Victorinox watches are very important to the watch industry in my opinion. For many people not familiar with the greater breadth of offerings from the watch industry, these Swiss timepieces are a creamy options when wanting a piece that combines good design, sporty styling, and solid value. As a kid I grew up knowing about Swiss Army watches, and not so secretly wanted one. I recall in college an friend of mine who had received one as a gift wearing it around (as I admired it). He wasn’t at all a watch person, but liked its chunky substantial feel, and dead-easy to read dial. Swiss Army for many people represent a good choice for a nice watch, and the brands hold’s this reputation well.

It all starts with the logo. The little Swiss flag made into a strong looking shield. It is a slight modification of the logo of the actual Swiss Military. A not so subtle reminder of the value of the Swiss watch industry, and the strength of the brand. In my opinion, this is one of the most clever logos in the watch industry. Being attractive, while at the same time communicating the values of the brand and the Swiss timepiece industry. This even persists despite the ironic nature of the Swiss army itself – which is more or less a peace keeping force. So you have a brand built around the idea of a durable high-activity timepieces, but with the name of a lack-luster military power. Switzerland is a well-known neutral country and has a small armed forces unit that never makes the news. When was the last time you actually heard of the Swiss army? Google “Swiss Army” and the watch brand holds the first few positions. If anything, the best thing that happened to the Swiss military was Swiss Army watches. Interestingly enough, according to Wikipedia, the Swiss army has mandatory services for males when they reach age 19. Though no one has ever mentioned this to me while I was in Switzerland.

The vision of the Swiss army has been over taken by watches, and we can thank Swiss Army for that. They add the Victorinox name in there because no brand can sustain a trademark with a name like “Swiss Army.” The success of the brand has yielded many competitors who have similar names and symbols. These include Wenger and Swiss Military Watches. But I digress.

A few years ago Swiss Army Victorinox decided to ramp up (substantially) its presence in the mechanical watch market. The idea was to take the core look and values of the brand, and produce higher-end pieces. As such, the brand would retain its core market of quartz based timepieces, and supplement it with mechanical watches that has the same feeling, but with upgraded cases, components, and of course movements. The positive association with the brand would make it easy for a generation of Swiss Army watch lovers to “graduate” to mechanical watches from their quartz timepieces. Staying in the same brand would be of course good for Swiss Army. 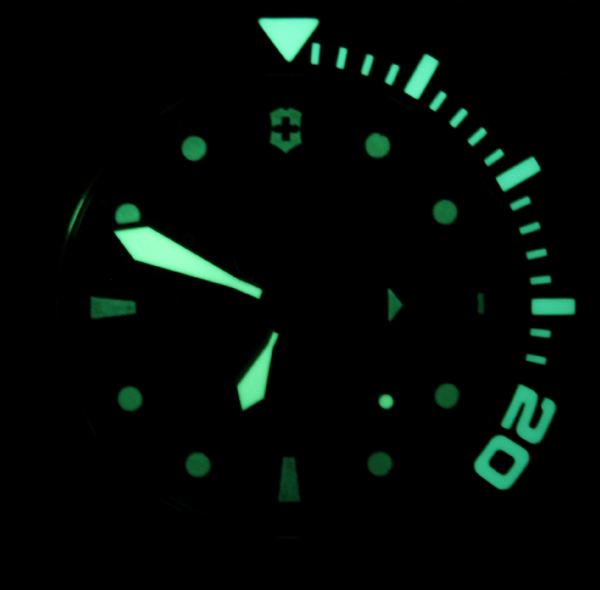 A few years ago the Swiss Army Dive Master collection of watches came out to my delight. From the first time I saw them I loved the quartz based dive watches that came in cool gunmetal gray cases. As I pointed out above, Swiss Army released a limited edition mechanical version of the Dive Master, and eventually a full line of mechanical diver watches called the Dive Master 500 Mecha (or Mechanical) collection.

Dial design differed from the quartz models. It is a matter of taste which you prefer. The dials for the Mecha models are a bit more intricate, but there is a bold simplicity to the quartz ones that I like.  New for 2010 is this blue colored version of the Dive Master 500, and it is a ‘bute. There is actually a new quartz model for 2010 as well. The dark gray gunmetal tone is applied via PVD to the 43mm wide steel case is done very nicely. While most of the case has a brushed finish to it, segments of the rotating diver’s bezel are polished – helping to make for a more attractive look. Swiss Army understand that any functional design must also be visually pleasing. 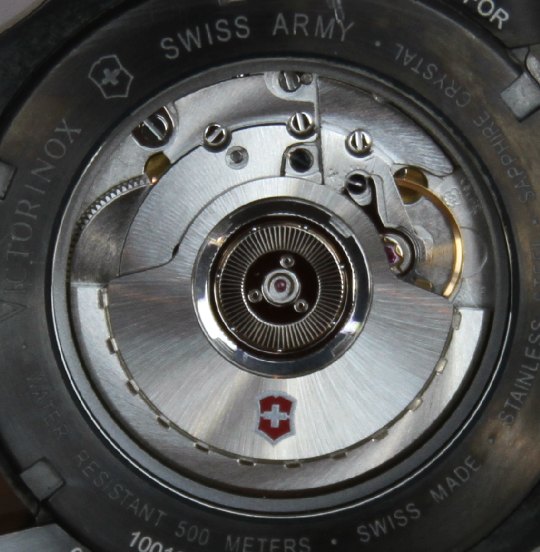 The case is quite substantial in weight, but not super large in size. It has a very good feel on the wrist even though it is weighty. Swiss Army certainly crafts a comfortable watch in my opinion. Even though the case construction is a relatively simple 3 piece design, Swiss Army does a good job of adding visual interest to it. The large crown guard is purposeful and helps make the piece look quite rugged. Actually the case is quite rugged being water resistant to 500 meters.

Swiss Army places a healthy amount of lume on the bezel. It does not go the entire way around the bezel, but it is richly applied where you do find it. Swiss Army opts for a solid 60 click bezel that feels good to turn. You’ll appreciate the refinement to this aspect of the watch. Makes you wonder how some more expensive watches do worse with bezels when a brand like Swiss Army can do it so correctly.

Dial design is great. It is set deep into the case, and interestingly is preceded by the flat gunmetal wall of the bezel and then a sloped flange ring. You almost never see both on a watch. Each of the hour markers are applied, and contain immense amounts of SuperLumiNova. The night viewing on this watch is excellent if the dial is properly charged with light. As is the custom with Swiss Army watches – you’ll see a smaller ring of number for military time . I love the use of the brand logo for the 12 o’clock hour indicator, as well as the unique style of the date window. Might have been neat to have the date dial in blue with a white font. Large claymore sword style hands are easy to see and read. Though I do also like the hands on the quartz models. 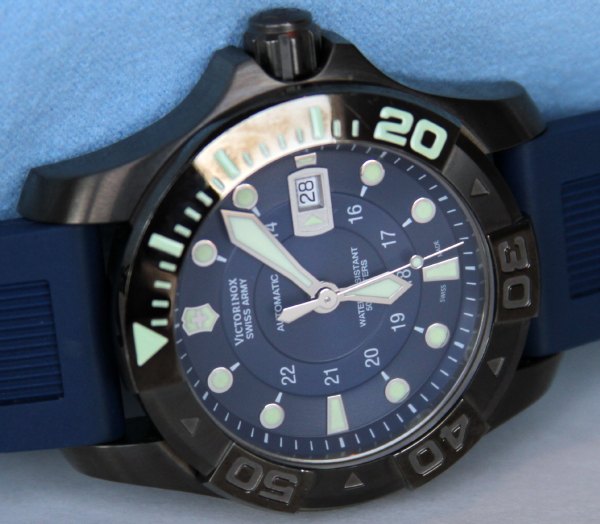 Swiss Army uses an AR coated sapphire crystal over the dial as well as a mineral crystal over the caseback of the watch. It isn’t too common to see timepieces with exhibition casebacks that are water resistant to 500 meters. Inside the watch is a movement that I totally would not have guess Swiss Army to use. Logic would indicate that with a watch like this, at this price range, they would use a Swiss ETA 2824-2 automatic. However, Swiss Army ups the ante using a higher-grade ETA 2892-2 automatic. Why the use of the higher-grade movement? Not sure. It is more nicely decorated “out of the box” from ETA, and it features buttery smooth hand-winding (when you want to hand-wind the watch). The 2892 is also a thinner movement, but that doesn’t seem to be an issue here as the Dive Master 500 is not exactly a thin watch. This is one of the least expensive watches around with a 2892 in it.

Attached to the watch is a thick, high-grade rubber strap – which Swiss Army likes to point out was actually make in Switzerland. The blue strap matches the blue of the dial, and is very comfortable. It is one of the best quality rubber straps I have had the pleasure of wearing. It is rubbery, but not sticky, in the sense that your hand moves smoothly over it, and the strap fits easily in the loops when putting the watch on. Trust me, you’ll like the strap in comparison with other rubber ones out there on watches in this range. Speaking of which, the Swiss Army Victorinox Dive Master 500 Mechanical retails for $1,095. Blue is the newest color as of the writing of this review, but the watch can be had in several different colors (such as black, orange, red, etc…). If you like the look of the piece and have a positive association (as you should) with Swiss Army watches, this is a very solid and well made watch with a lot of desirable features for a price that isn’t at all unreasonable.