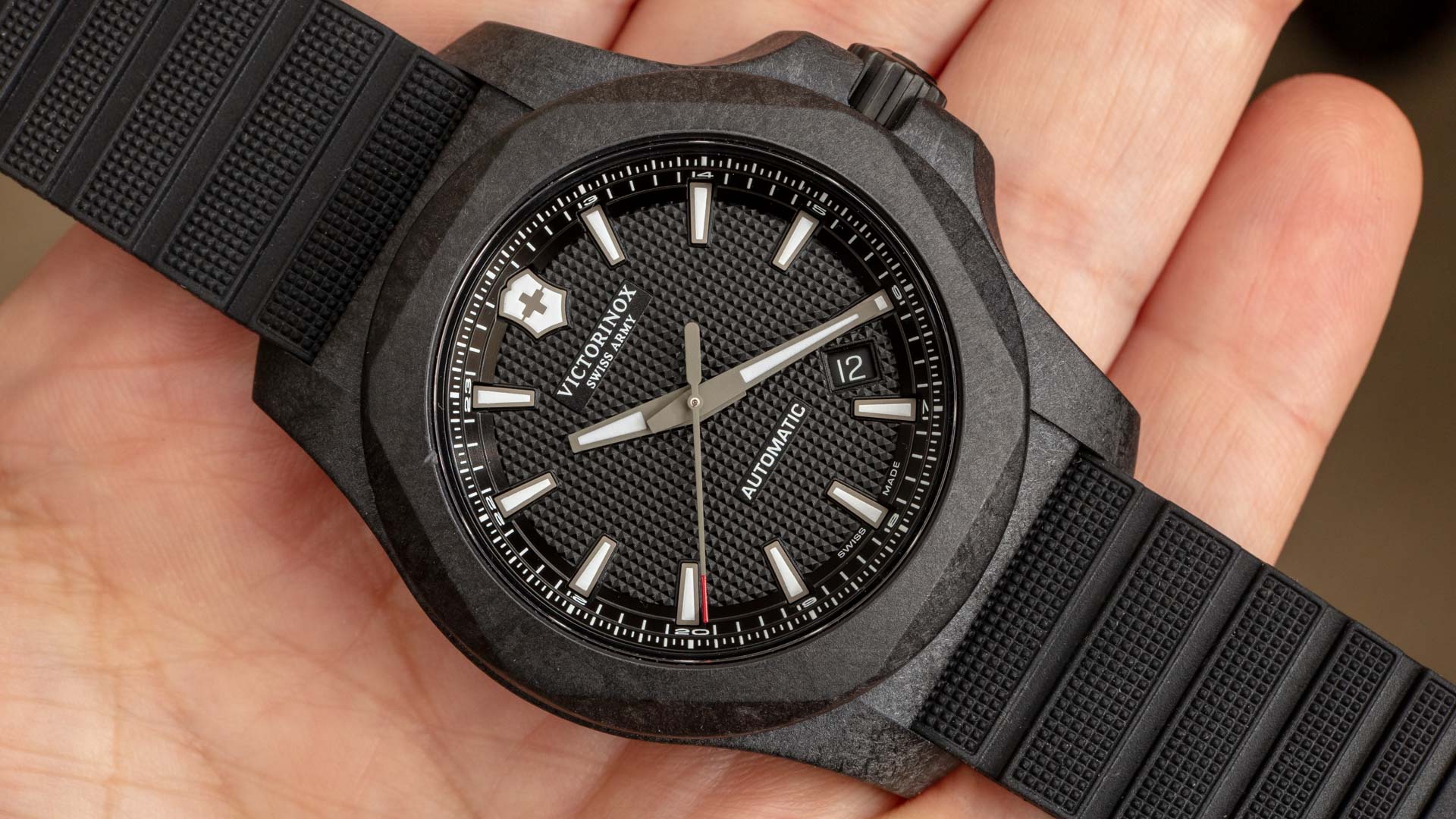 Having covered the Victorinox Swiss Army INOX (aka I.N.O.X.) since its introduction five years ago (aBlogtoWatch review here of the original quartz model), I am extremely familiar with pretty much every version of the watch that Victorinox has produced, and today, I have the chance to introduce yet another new model, the INOX Carbon Mechanical reference 241866. The INOX is compelling and relevant as a watch concept. Visually attractive and fashionably versatile, the INOX was developed entirely to be tough as nails. Victorinox Swiss Army even developed a series of more than 100 “abuse” tests that the watch was designed to survive. 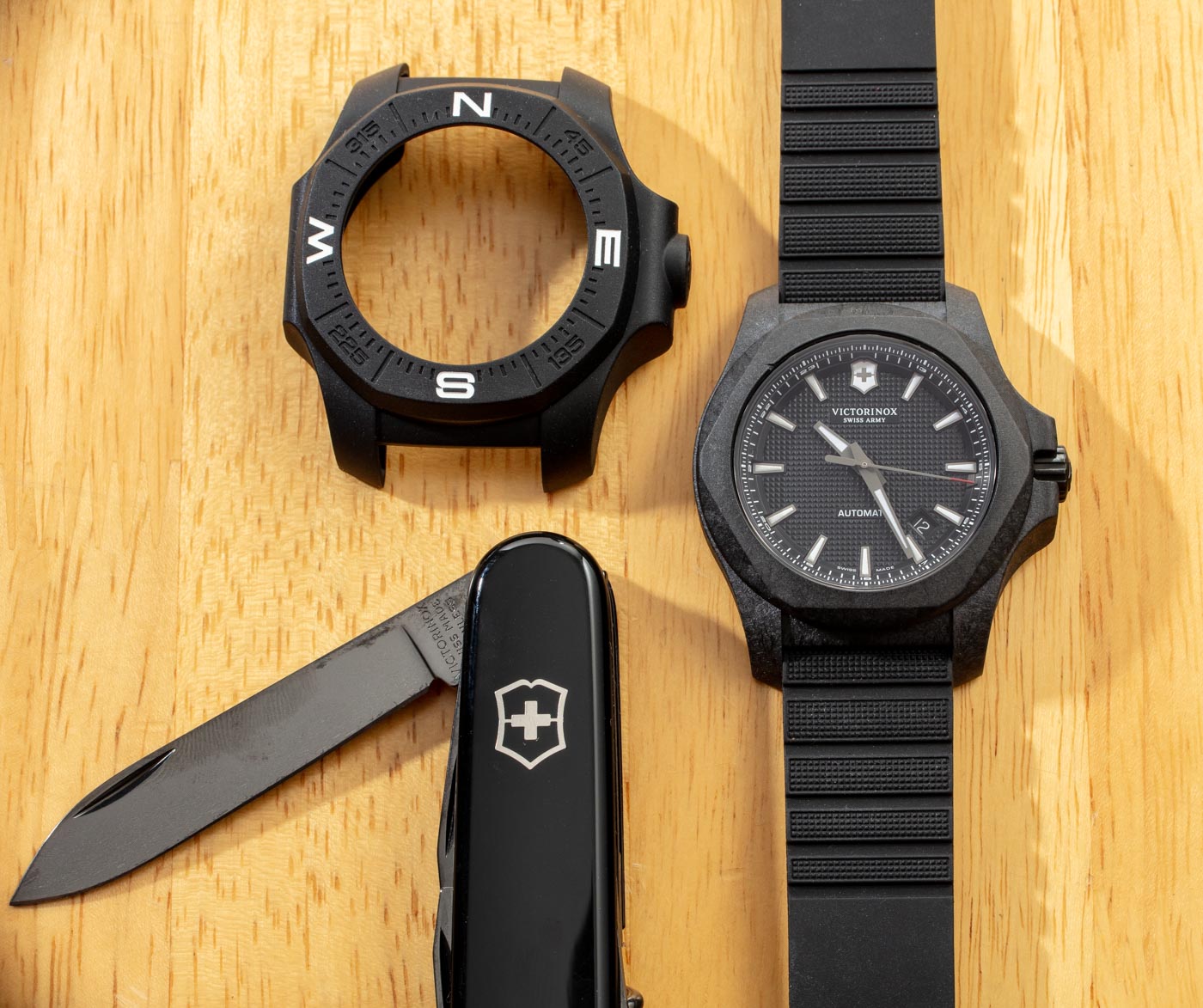 No matter how new an INOX watch is, my understanding is that each INOX product must endure the same stress tests as the originals did. At first, this proved highly challenging when it came to producing a mechanical version of the INOX — simply because quartz movements tend to sustain shock and vibration far better than mechanical movements. Last year, Victorinox Swiss Army finally released an automatic mechanical version of the INOX, and today we get to see the carbon-cased version of that, known as the Victorinox Swiss Army INOX Carbon Mechanical. 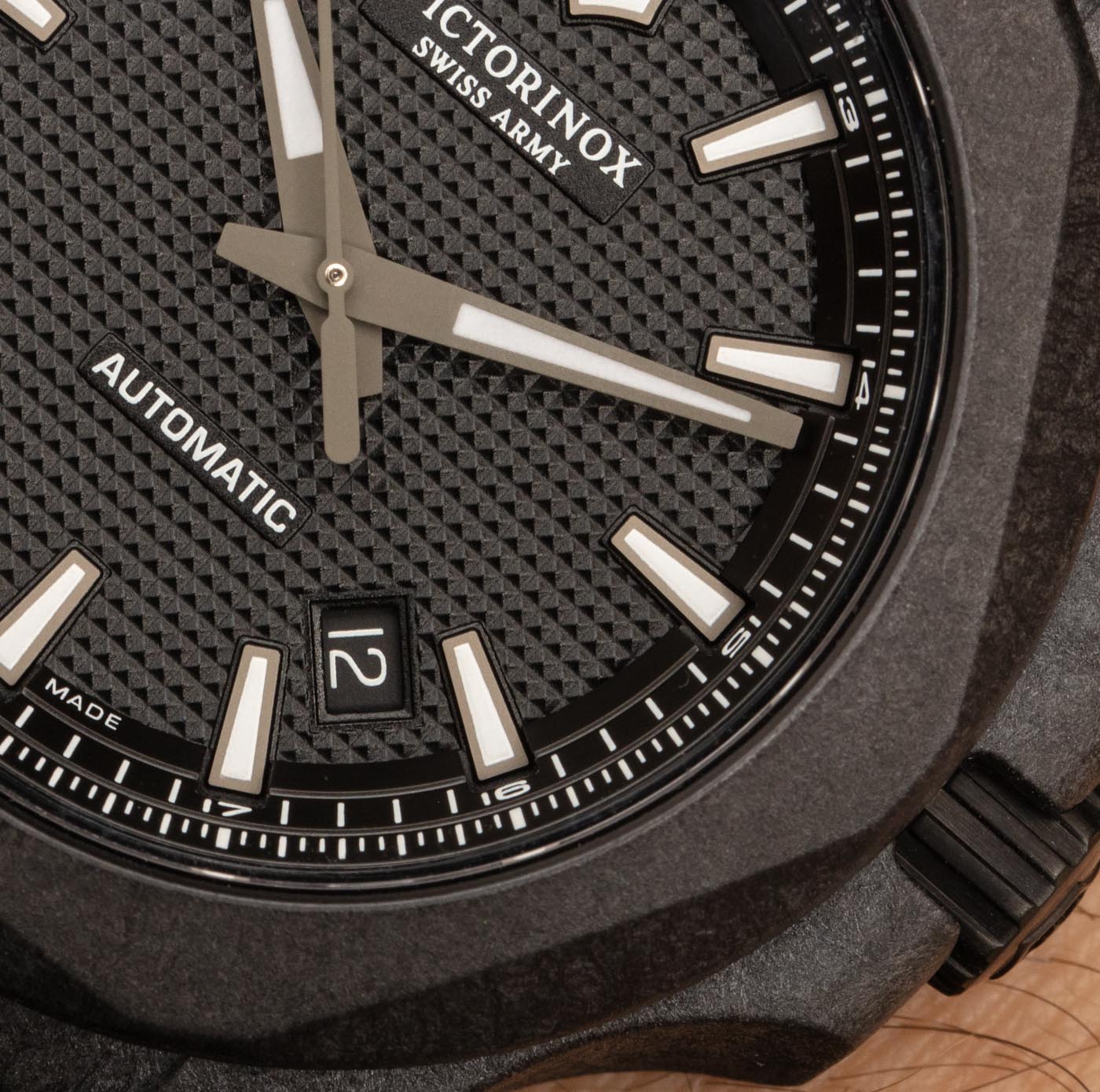 Carbon as a case material is increasingly popular for luxury watches. Why? Well, it does have some performance advantages, including being light and very tough. Not that it matters for wristwatch use, but carbon is also highly resistant to various environmental forces (such as high temperatures), as well. Carbon has been used on million-dollar Richard Mille watches all the way down to relatively affordable sport watches. Carbon itself is just an element, and it is true that carbon case materials are certainly not all created equally. What you want to look for in a carbon watch case are three things. First is the aesthetic appeal of the grain, color, etc… Second is the ability for the material to be machined with the type of precision you need to make sure it renders the fine lines on a wristwatch case accurately. Finally, you want to make sure the material itself is tough enough to handle being beaten up and abused. 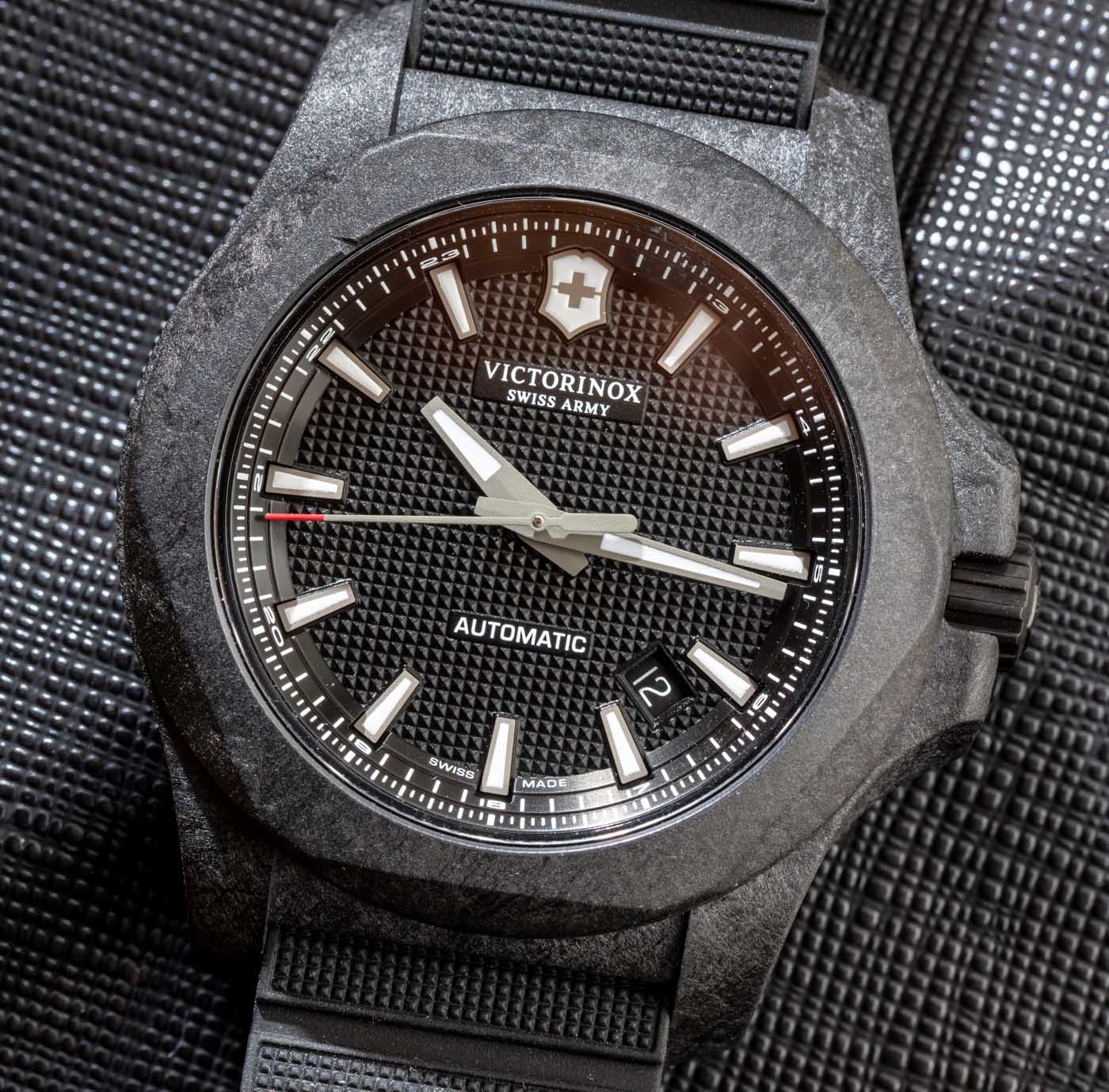 This particular piece is a pre-production INOX Carbon Mechanical prototype, and as such is going to be rougher than the retail versions. So, if you look closely at the case and see some wear and tear, that is the reason; I just want to make that clear since the watch here doesn’t reflect the higher standards that are applied to the final retail models.

Carbon is a great case material in both look and lightness, in my opinion, and I don’t think you should have to spend big bucks to enjoy it. While there will be no deficit of $10,000- or $20,000-plus fine timepieces with carbon cases, you don’t need to spend nearly that much for a nice-looking carbon case. Case in point. 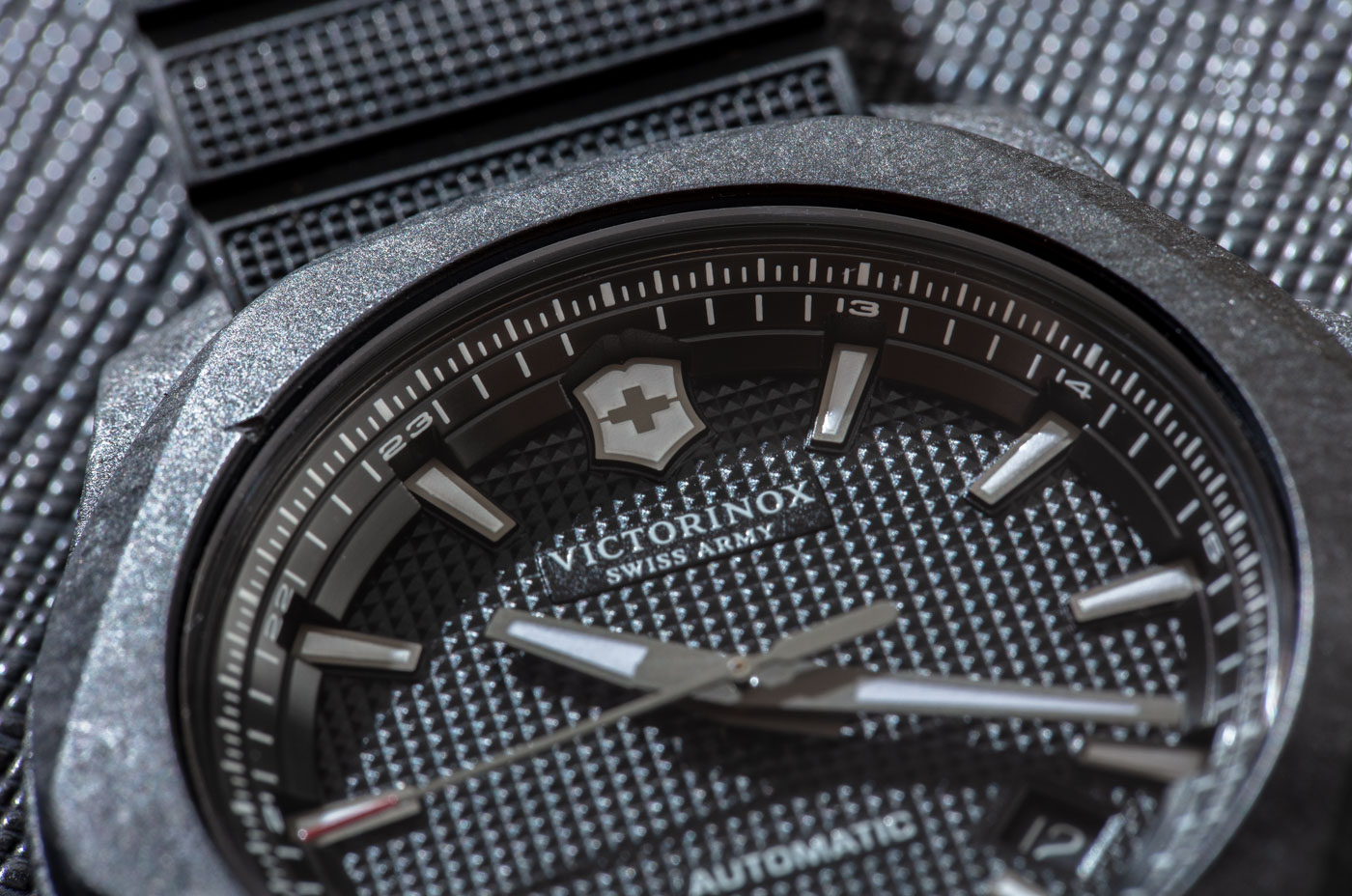 The INOX’s distinctive round, yet angular case design lends itself well to being produced in carbon. I’ve previously only seen the design in steel or titanium. Even though precise lines tend to be muted sometimes on black cases, I found the carbon color (and material) of this particular INOX to still prominently feature the now-iconic visual design. The carbon composite case is 43mm-wide and about 13mm-thick with 200 meters of water resistance. The carbon bezel is raised just a bit over the sapphire crystal to help protect the crystal somewhat. Victorinox Swiss Army makes a point to say that they use three layers of AR-coating on the crystal. 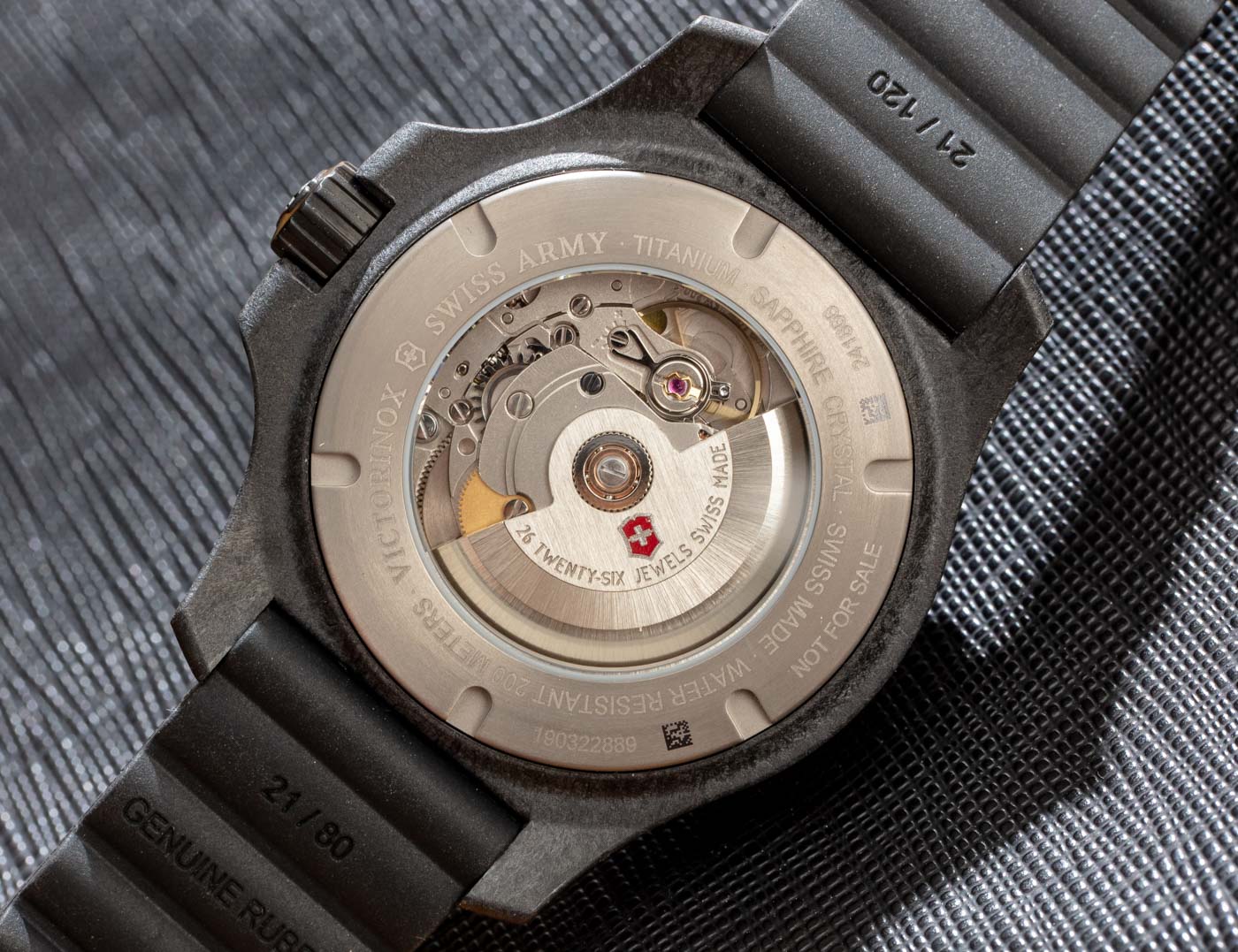 Given that they want the user to appreciate the mechanical movement in the watch, this INOX has a display caseback offering a view of the Swiss-made Sellita SW-200 automatic movement (4Hz with about two days of power reserve). The screw-down caseback of the watch is not in carbon, but rather produced from titanium.

Speaking of metal, the face of the INOX Carbon Mechanical is inspired by Victorinox’s Alox metal, which has a repeating square pattern. The dial is otherwise relatively straightforward, combining handsome looks with traditional readability. The hour markers and hands are given a complimentary dark gray matte finishing and have middle sections painted with luminant. A flange ring around the dial is actually part of the security system that holds the hour markers in place if the watch experiences high levels of shock. 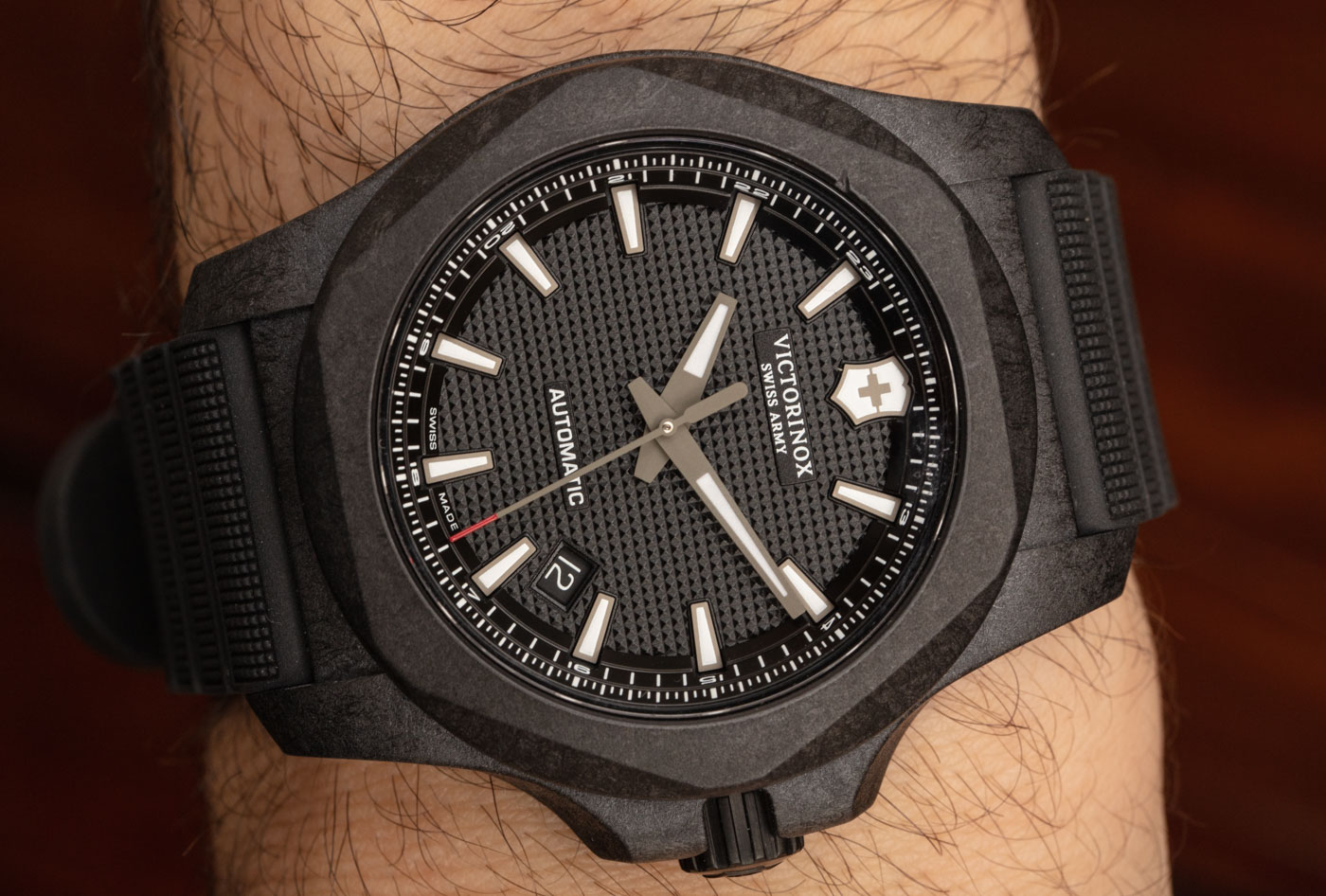 One thing I want to point out about the INOX Mechanical face is that the inclusion of the 24-hour “military time” scale is also symbolic, as it is too small to be read by most eyes without magnification. Having the 24-hour scale on most all their watch dials is a sort of Victorinox Swiss Army hallmark design feature — and in this watch, it is there technically, but so small you’d be forgiven for missing that the scale even exists on the dial. Between 4 and 5 o’clock on the dial is where Victorinox Swiss Army decided to put the date window, which they did correctly with a matching black date disc and so as not to disturb any of the hour markers. 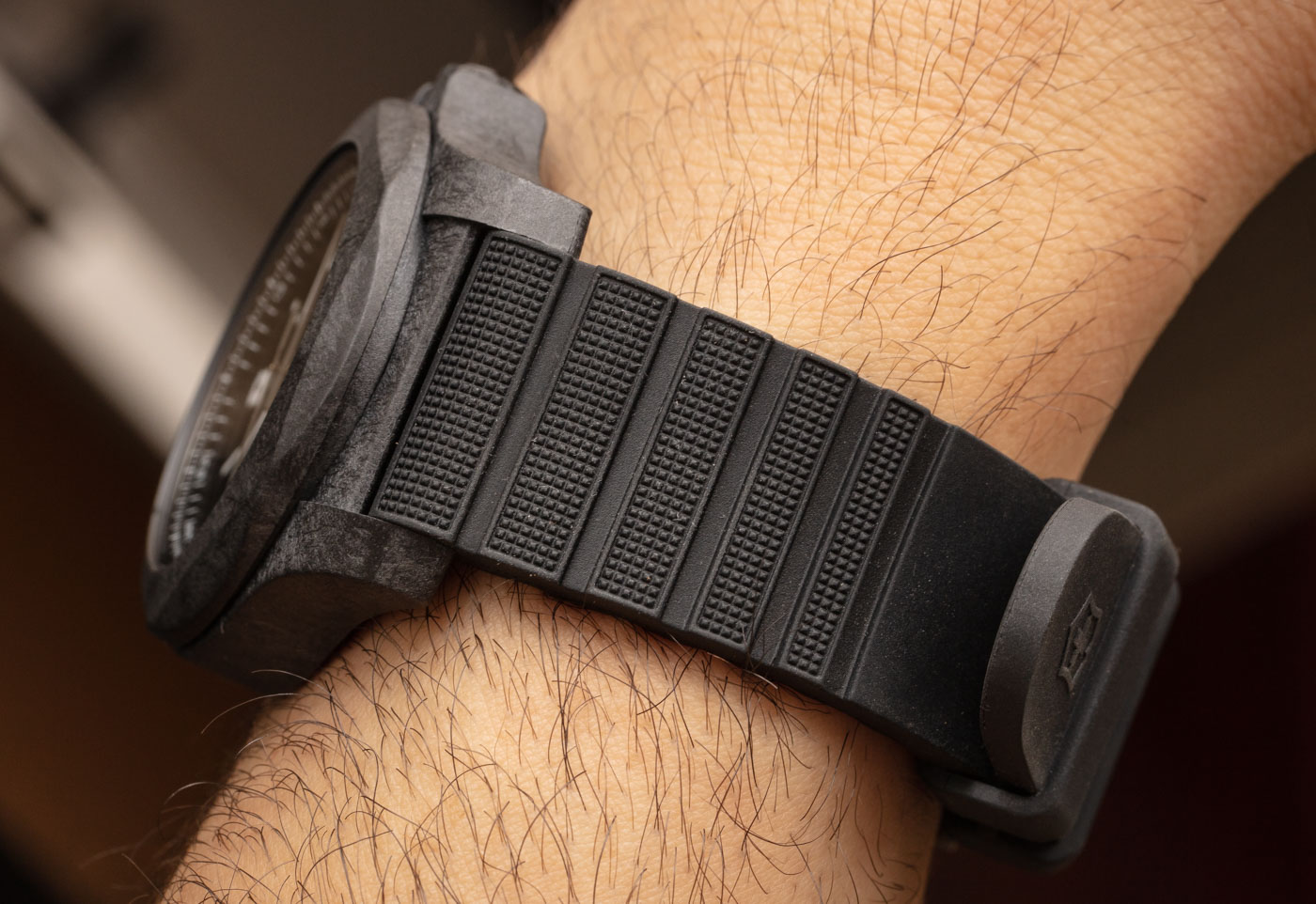 Attached to the case is a 21mm-wide natural rubber strap that has some segments with a pattern meant to mimic the Alox-style dial. The strap is nice, but I’m not in love with some elements of it. First of all, I think the strap is too thick, and I feel like it would have been more comfortable if it further tapered down in thickness away from the watch case. Then, you have the steel deployant clasp, which seems to make the strap feel even bulkier, and that has a finishing which doesn’t match any other finishing on the watch, save for the movement. I would have guessed that Victorinox Swiss Army would use at least a matching black-colored deployant. Personally, I think some enterprising INOX Carbon Mechanical owner will put the watch in a different strap and really enjoy the experience. Note that 21mm-wide straps are somewhat uncommon to come across.