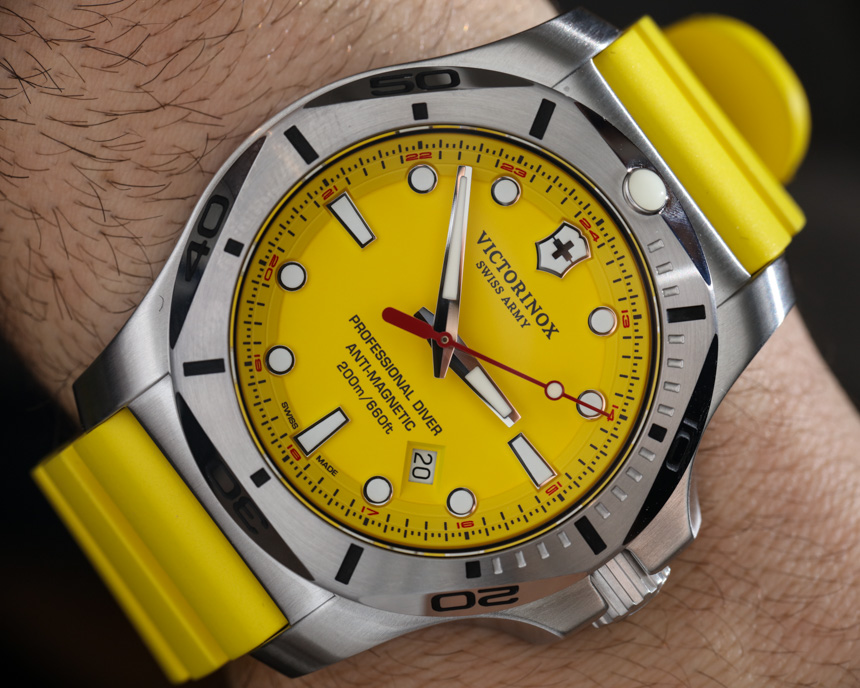 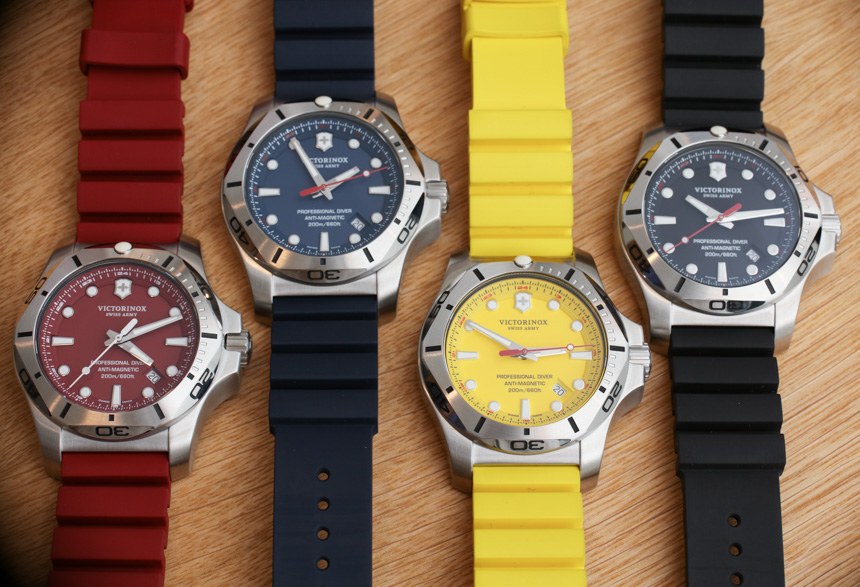 At Baselworld 2016, Victorinox Swiss Army released a new “Professional Diver” version of their popular INOX collection which adds some functionality and case size (not to mention colors) to their popular “beat-me-up” high-end quartz watch collection. As an attractive daily wear or beater watch that isn’t too expensive, the INOX is a great choice. I think what I like most about it (in addition to all the promised durability) is the refined slick European design mated with a quality that is good enough for a mechanical watch. 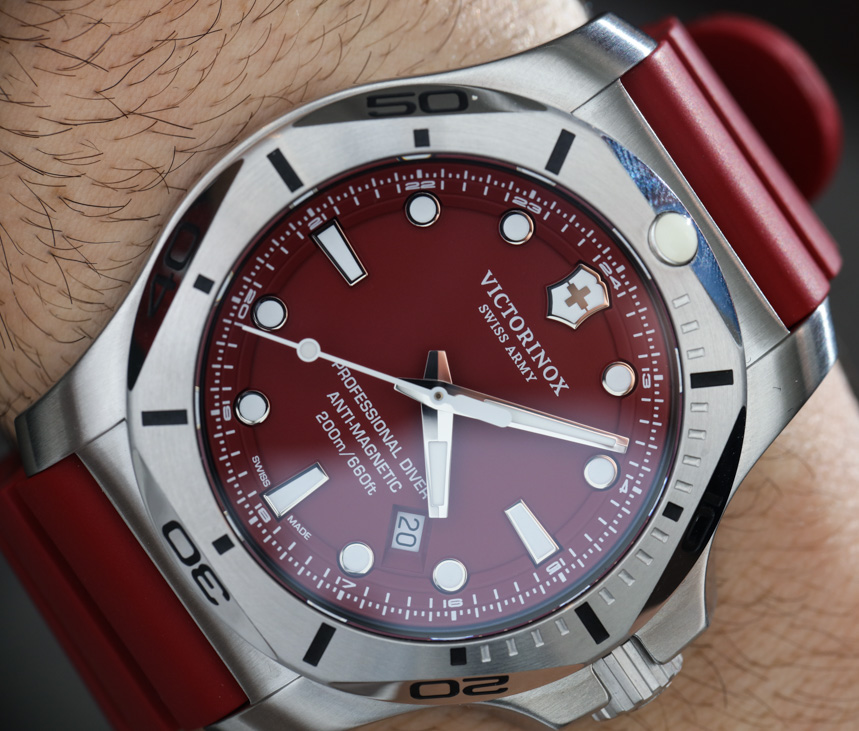 The INOX features a Swiss Ronda caliber 715 quartz movement because a mechanical movement wouldn’t be nearly durable enough to survive the over 100 “stress tests” Victorinox Swiss Army used in the design and development of all INOX watches. With that said, the nicely-finished steel case and attractive dial could theoretically be paired to a mechanical movement and easily scale to a slightly higher price point without any additional changes. I say all this as part of my new rule in appreciating high-end quartz watches. That rule, again, is that a high-end quartz watch is good if its case, dial, bracelet, and hands are nice enough to accommodate a mechanical movement and be priced accordingly. 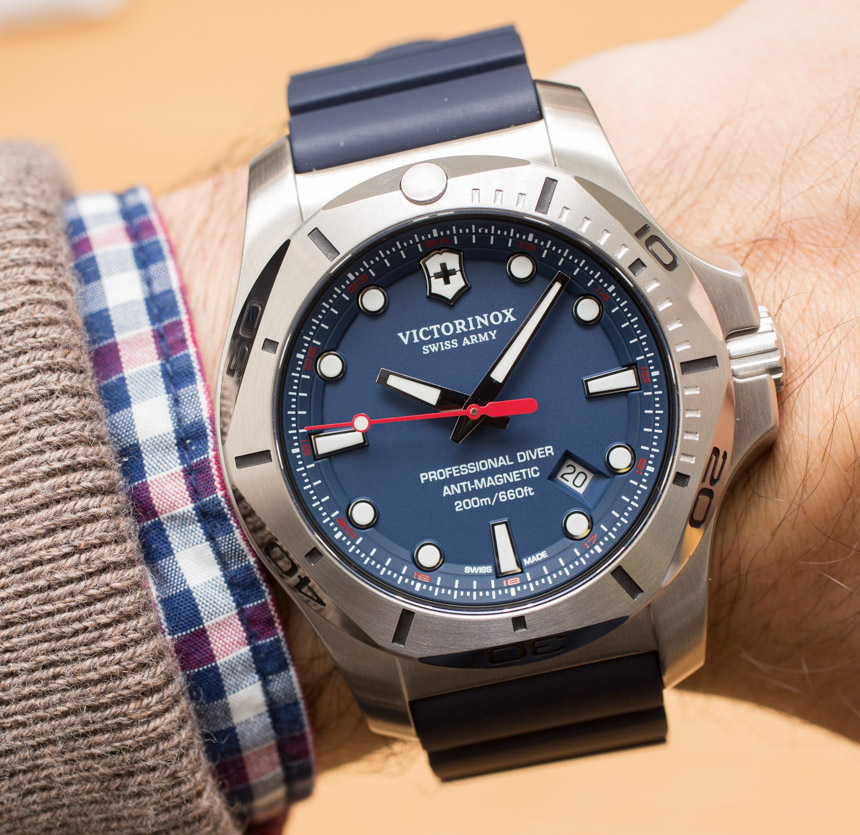 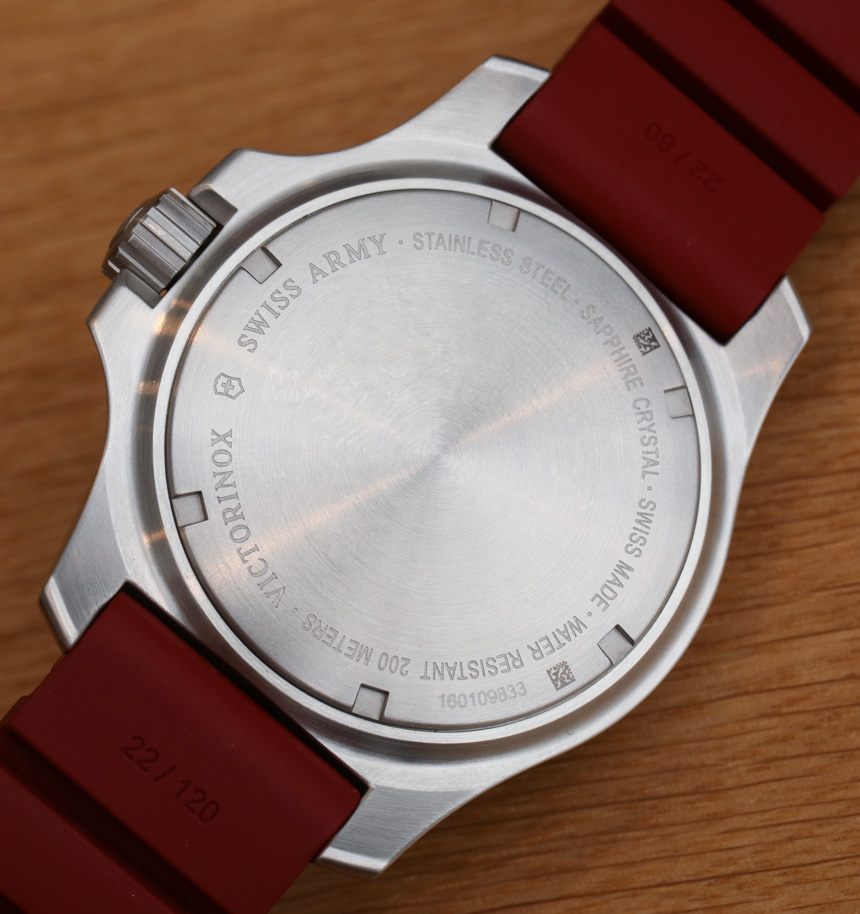 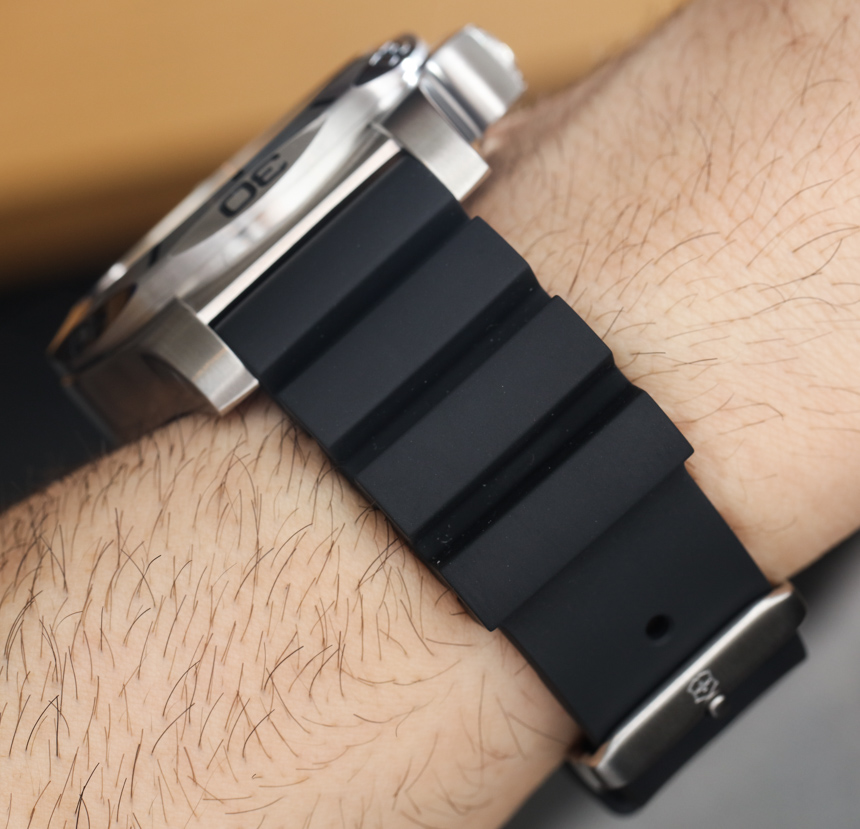 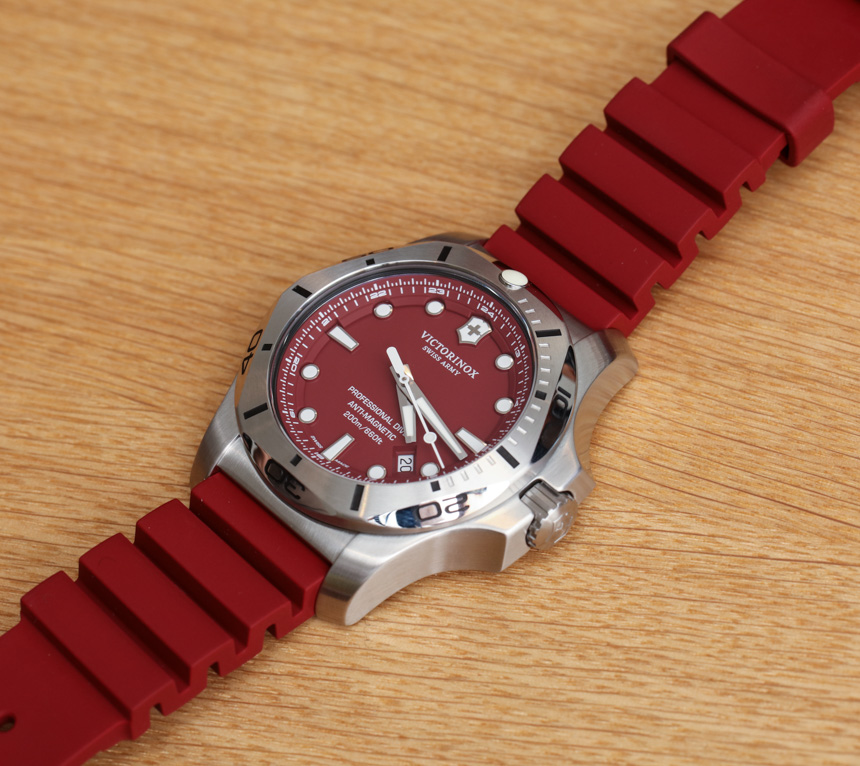 In other respects, the Victorinox Swiss Army INOX Professional Diver is a lot more of a “diver” than the original INOX. The 43mm-wide steel case has been increased in size to 45mm wide, and of course, the Victorinox Swiss Army INOX Professional Diver has been designed with a rotating diver-style timing bezel (with a lume pip at 12 o’clock). If you recall, the original INOX ships with a plastic “bezel protector,” which is a fun way of adding additional case protection. The Victorinox Swiss Army INOX Professional Diver ships with a similar accessory, but here the protector is transparent and fits over the entire top of the watch. Why? Well, what is cool is that the plastic cover also creates a lens effect over the dial making it appear larger, and thus theoretically easier to read underwater.

The brand designed a new dial for the Victorinox Swiss Army INOX Professional Diver which is a bit more “Submariner-style” than the original INOX dial, but I like it. The applied indexes are actually fitted from the back of the dial. This is part of the durability element I talked about, because Victorinox Swiss Army wanted to make sure that in the event of extreme shock the hour makers (and hands for that matter) will not dislodge from the dial. New dial labeling includes “Professional Diver” and “Anti-Magnetic.” These terms are perhaps true, of course, but I think their addition to the dial is merely design-oriented. With that said, male watch lovers do like to be reminded on a regular basis that their tool watches are… well, tools. 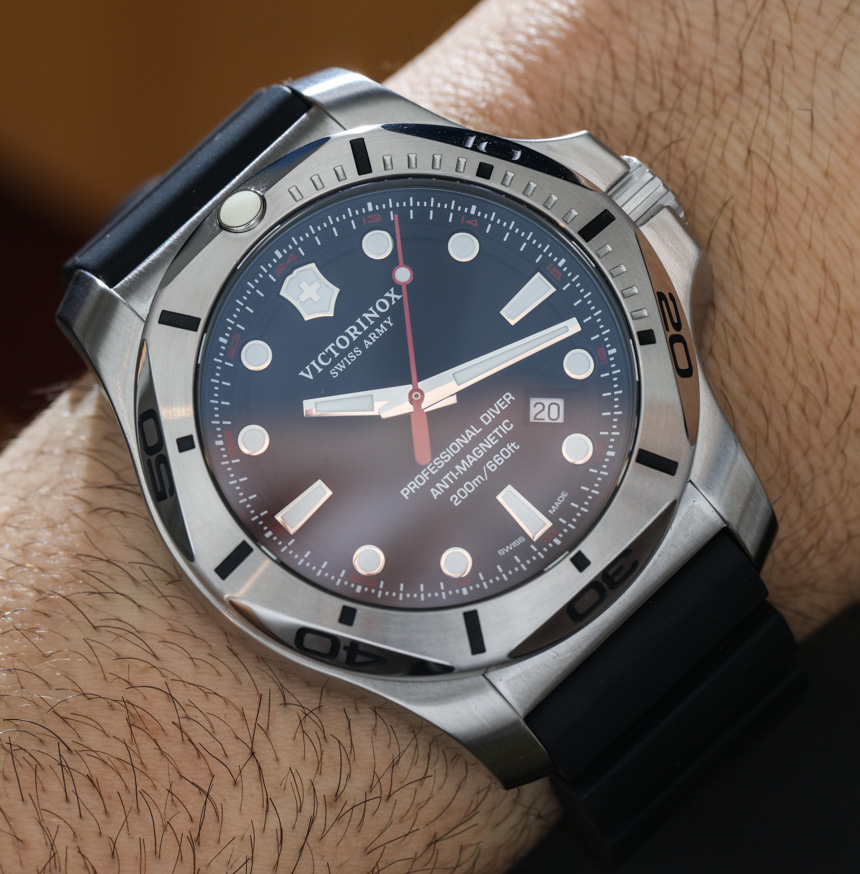 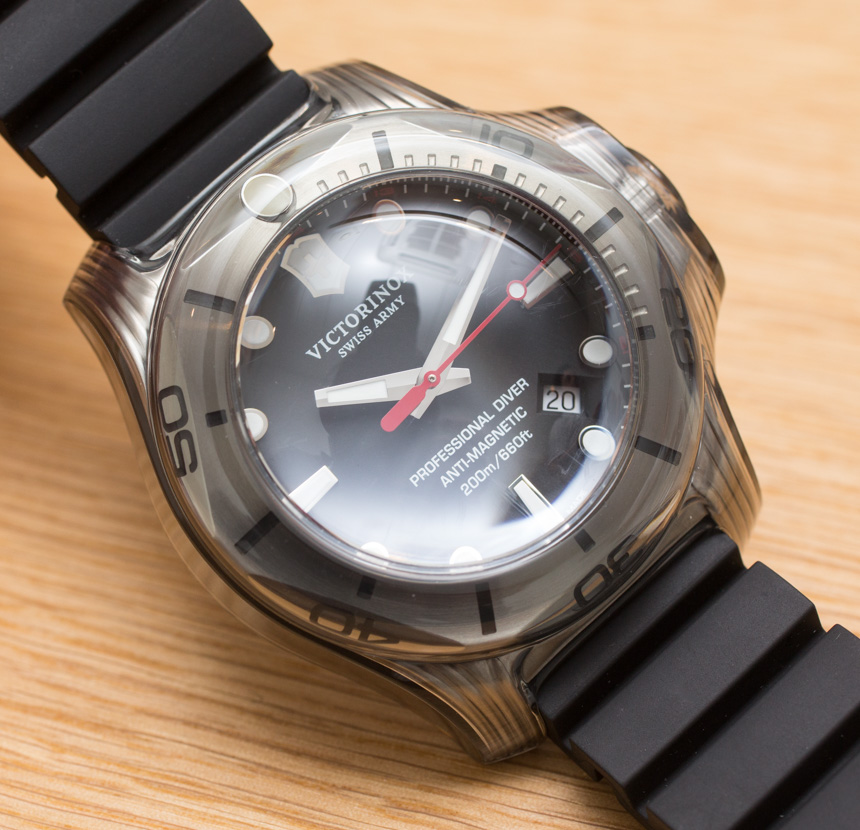 Around the periphery of the dial next to the lume-coated hour markers is the signature Victorinox Swiss Army 24-hour scale for reading the 12-hour or 24-hour “military time.” Attached to the INOX Professional Diver is a new rubber strap which is also diver-style offering extendable “stretch” ends which are meant to allow for the watch to sit comfortably on your wrist as well as have a strap that is long enough to fit over a diving suit. 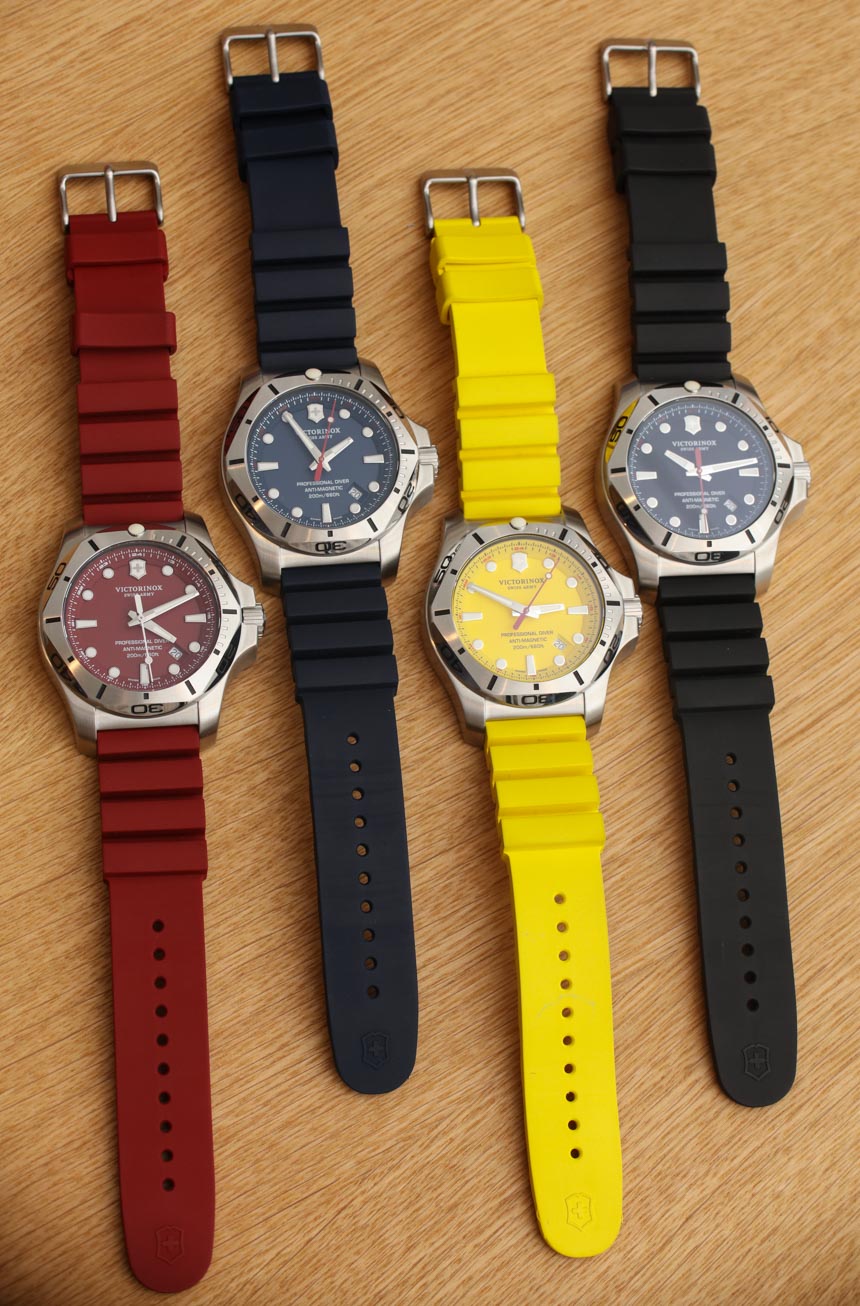