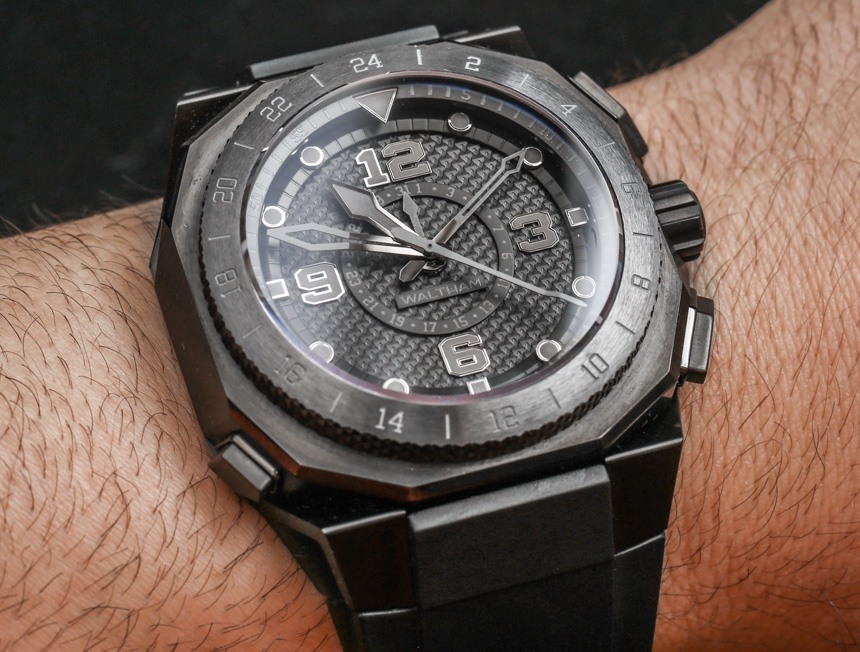 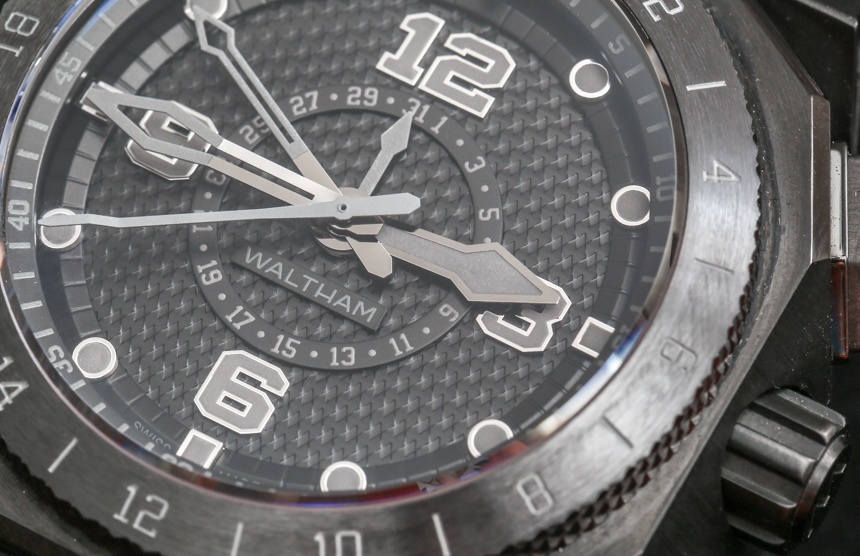 In 2014, Waltham watches came back – and today, I will be reviewing the Waltham Aeronaval CDI Black Matter. Do I mean that old pocket watch maker, Waltham? Yes, this is sort of the same Waltham of Massachusetts, USA, that started in the mid 19th century and was one of the premier American watch makers. Well, the “new” Waltham isn’t exactly the same as the historic company, but it does share a name. Here is how that worked out. In about 1981 Waltham was purchased by the Japanese, and that was the end of it being a truly American watchmaking company. At the time, it was quite popular for foreign companies to buy up historic American watch companies. 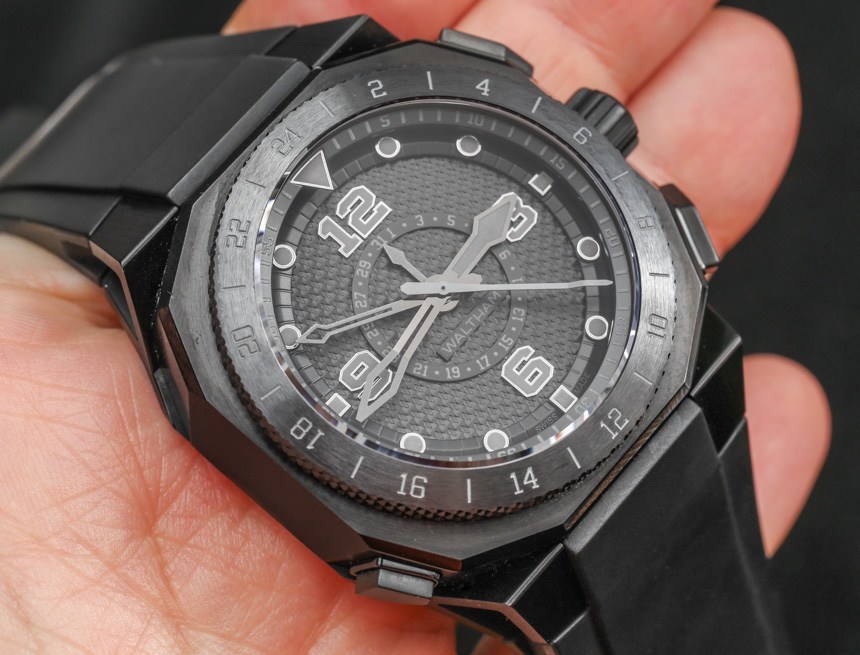 I don’t know how many Waltham-branded watches were sold in the US over the last few decades, but over the last 10 years or so, I’ve never seen one for sale. My understanding is that they were primarily sold in Asia. In the year 2000, the company was purchased by an American businessman named Antonio DiBenedetto, whose apparent mission it was to turn the company into a modern luxury watch brand with “Swiss Made” products. In 2014, the Waltham watch brand returned in a way that few people would have expected. Rather than focus on vintage style and design, Waltham was all about producing very modern sport watches “inspired” by the heritage of the brand such as their aviation instruments.

Thus, it makes sense that the very first collection of watches from the revived Waltham brand was the Aeronaval, and this watch is a version of the Aeronaval CDI. The entire Waltham Aeronaval CDI collection is directly inspired by a vintage Waltham cockpit instrument clock with a central date hand. In fact, “CDI” simply stands for “central date indicator,” which exists as the centrally mounted date indicator hand. This particular model in all black colors is the Waltham Aeronaval CDA Black Matter. 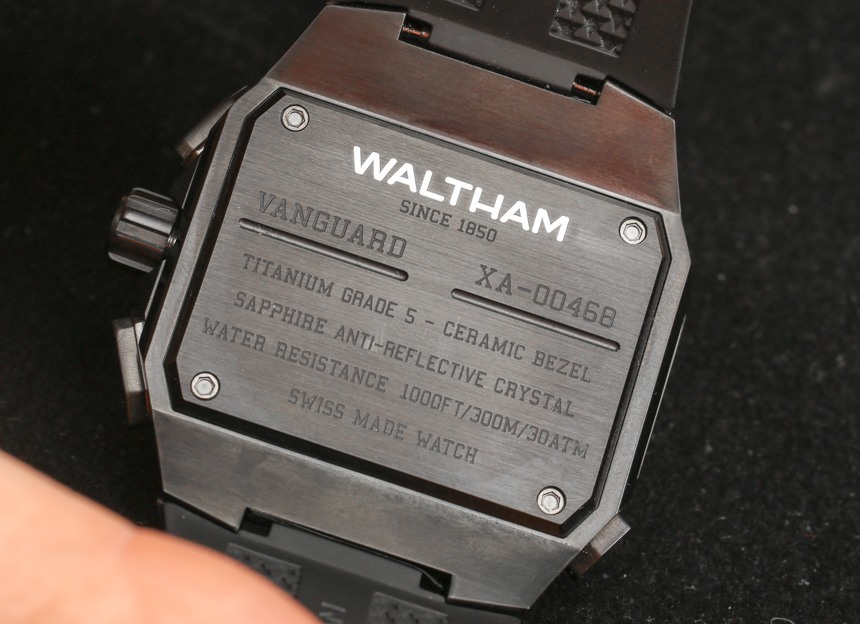 One of the first details about the watch that I noticed that I liked was the caseback which is more square than round and is meant to look like the back of a real cockpit instrument. This, in my opinion, was a nice detail. With a luxury watch price, Waltham is clearly going for a bold, but high-end feel that puts it in line with those various other boutique contemporary military-inspired sports watch makers. A brand like Snyper comes to mind. 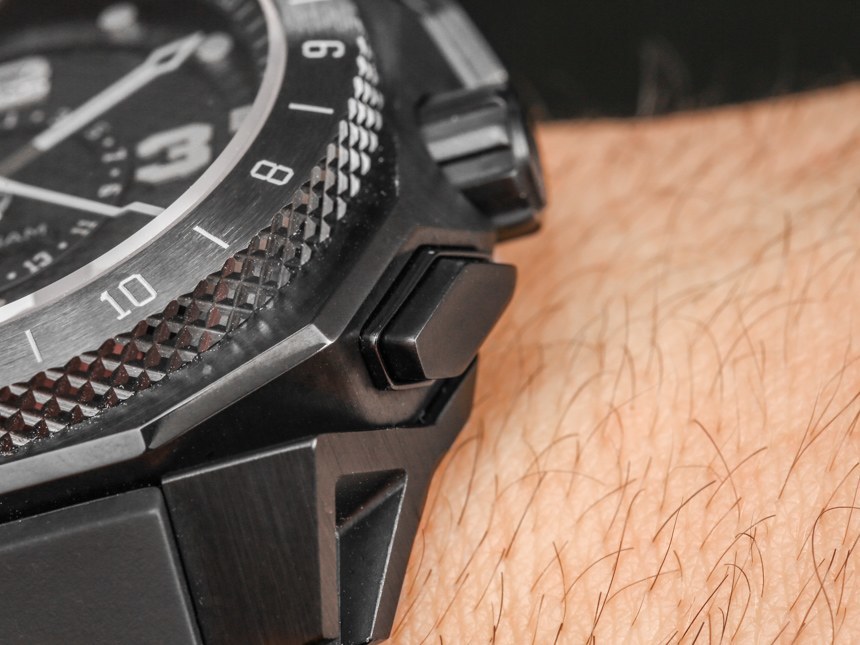 I also noticed that the watch looks very tough and wears snugly. The very wide strap matched to the already large case makes for an impressively macho look on the wrist – and thick titanium case with its sharp, angular architecture only enhances that fact. Of course, the all dark-toned Waltham Aeronaval CDI Black Matter watch makes for even more of a punch on the wrist.

Hold the 47mm-wide Waltham Aeronaval CDI watch in your palm, and you’ll know what I am talking about. Even the non-rotating black ceramic bezel looks as though it would fit well on a big rig. It isn’t that the Waltham Aeronaval CDI is too large of a watch, but rather that it is sized in a way to maximize its physical presence. With that said, the case does deliver with some expected durability such as a thick AR-coated sapphire crystal and 300 meters of water resistance. At least all that bulk isn’t (purely) for show. 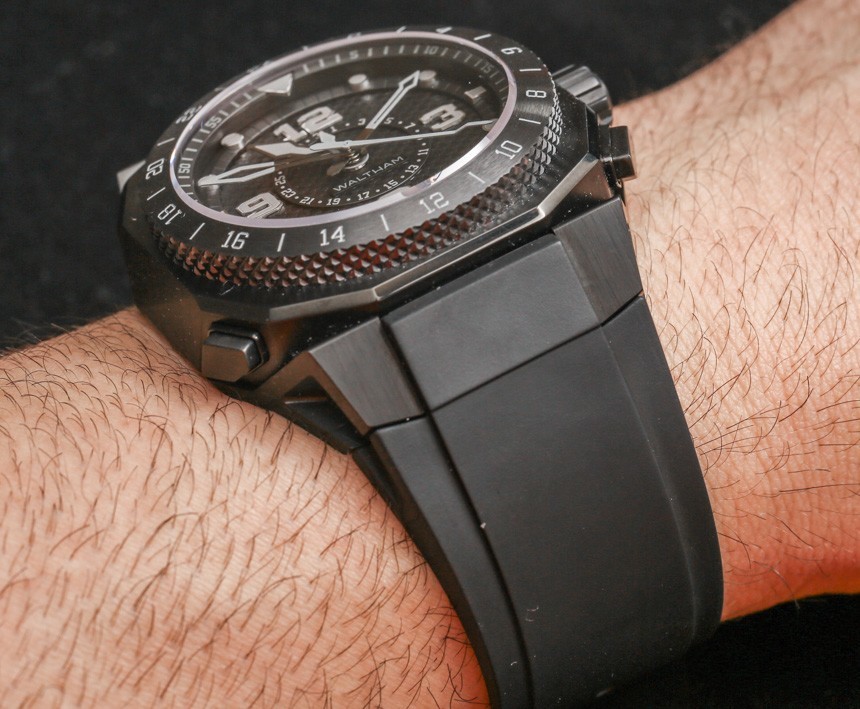 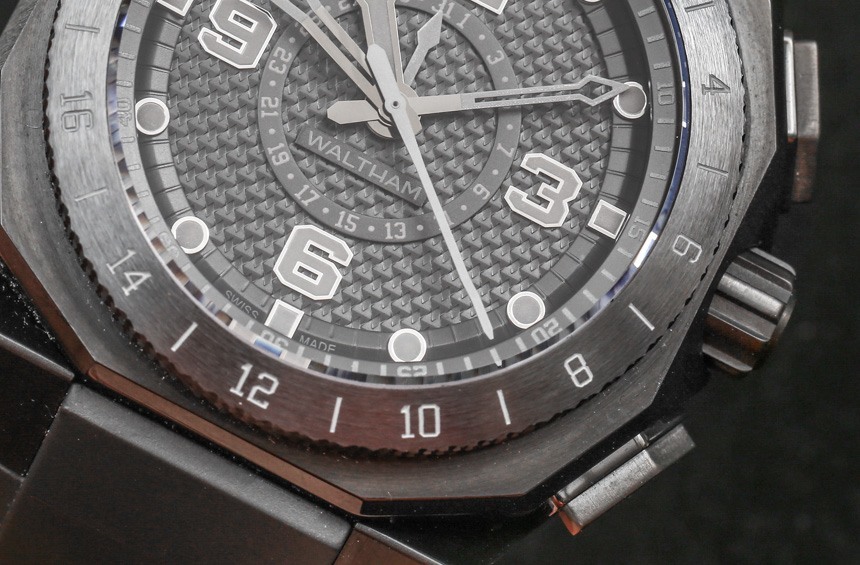 Waltham designed the Waltham Aeronaval CDI dial with a lot of nice textures and details, but also to maintain legibility. The depth to the dial is impressive, and I like the rich assortment of finishes. There is very little polished or glossy surface on the dial – which is a good thing, and the various blacks and grays used allow for a phantom look that is nevertheless something you can also read.

The dial of each Waltham Aeronaval CDI watch has five hands, and all are centrally-mounted. Aside from the time, the watch also has hands for the date as well as a GMT hand. The hands are modern and large, but once again, inspired by the look of vintage cockpit instrument clocks (namely, those produced by Waltham, of course). 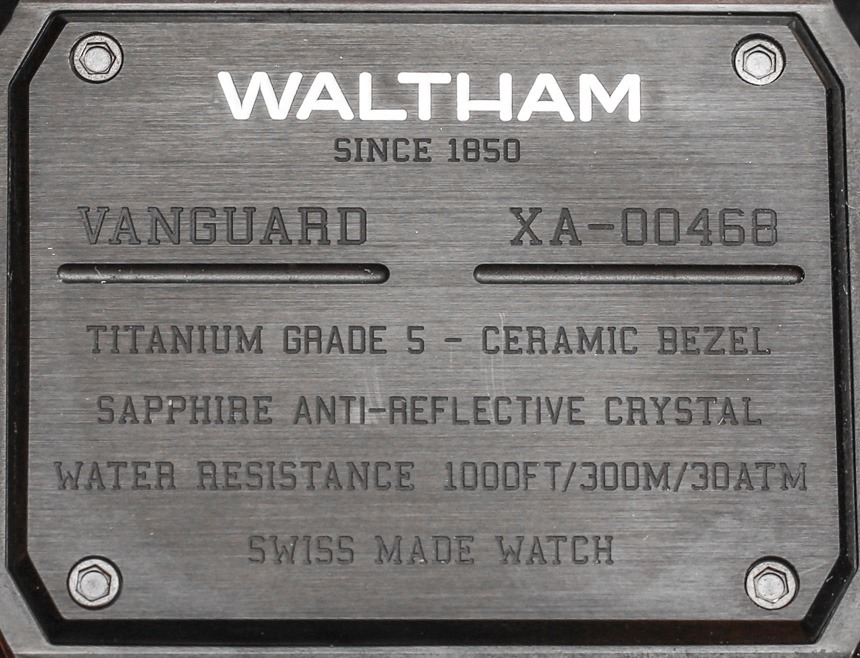 Inside each Waltham Aeronaval CDI watch is a Swiss Dubois-Depraz caliber 331 automatic movement. Waltham calls this their caliber W.DB-002. This is likely a modified Swiss ETA movement that has some tweaks to it. The movement operates at 4Hz and has a power reserve of about 42 hours. In addition to offering all the information on the dial via centrally-mounted hands, the movement also has pushers to operate the extra functions. A smaller pusher at 8 o’clock adjusts the date, while pushers near the crown are used to adjust the GMT hand forward or backwards an hour. As a travel watch, the Waltham Aeronaval CDI isn’t half-bad. 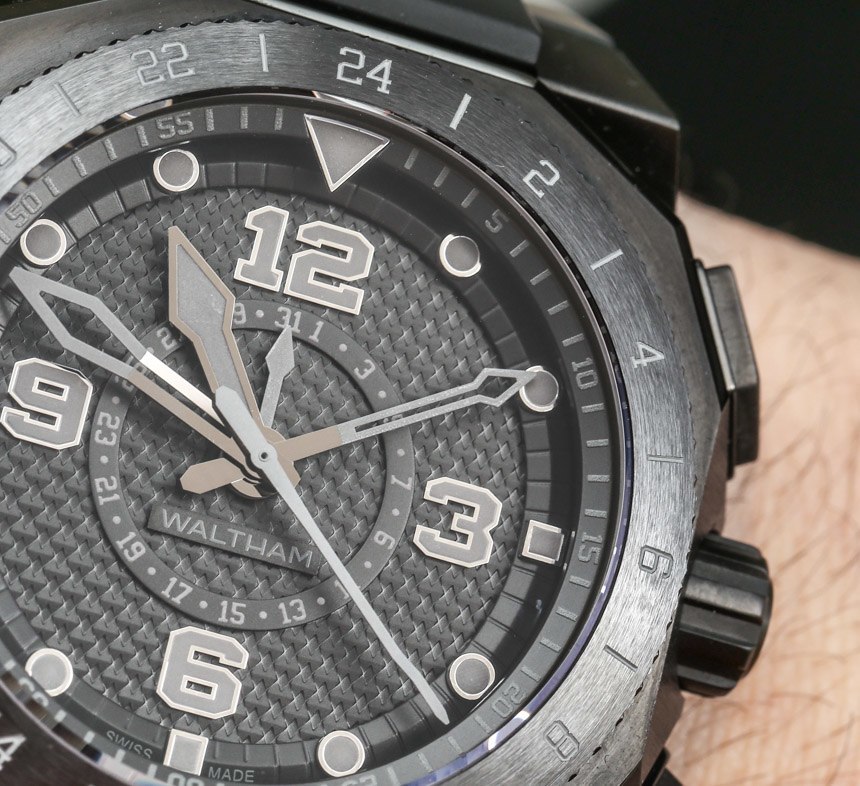 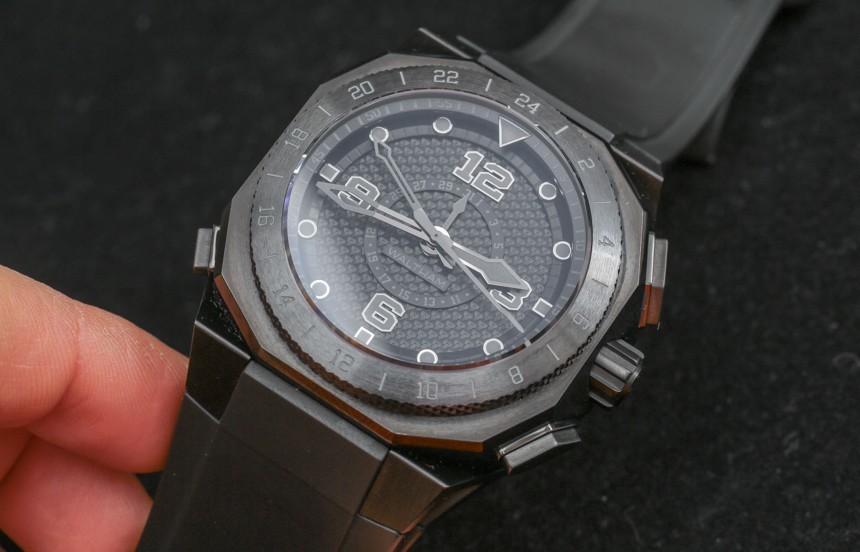 While I genuinely like this product, it is just so interesting to me that watch collectors familiar with Waltham as an historic maker of American pocket watches (what most collectors tend to think of when they consider the company) are now being asked to shift their perception and consider Waltham as a potentially American-run company that offers large modern looking luxury sport watches that are a great fit for anyone that grew up with video games. It isn’t that the Waltham of today is a bad concept, it is just a very difficult to imagine concept when you understand the historical foundations of the name. 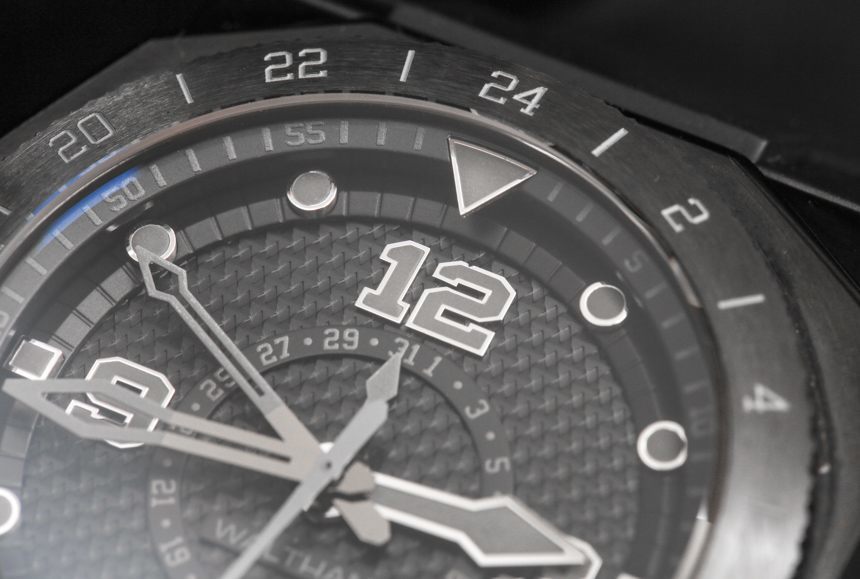 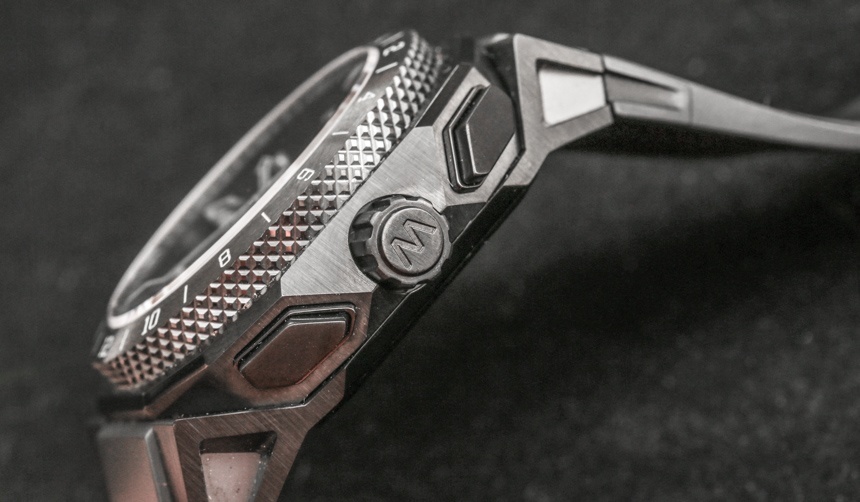 Of course, working with an established and historic name makes more sense for the people behind Waltham because it is often easier to “borrow” history than to make their own. Waltham today can easily (and perhaps justifiably) claim that they are the caretakers of the Waltham brand and doing what they feel is best for the company in these modern times. While I am not sure if their vision gels perfectly with the Waltham brand personality, I actually like what Waltham is doing. I just happen to be part of that demographic that grew up with video games and is fascinated by modern machines of warfare. For that reason, the Waltham Aeronaval designs speak to me. In addition to the Waltham Aeronaval CDI collection, Waltham also produces the three-hand (with subsidiary seconds dial) Waltham Aeronaval XA, and the ETC chronograph. Each of these watches shares more or less the same case design. 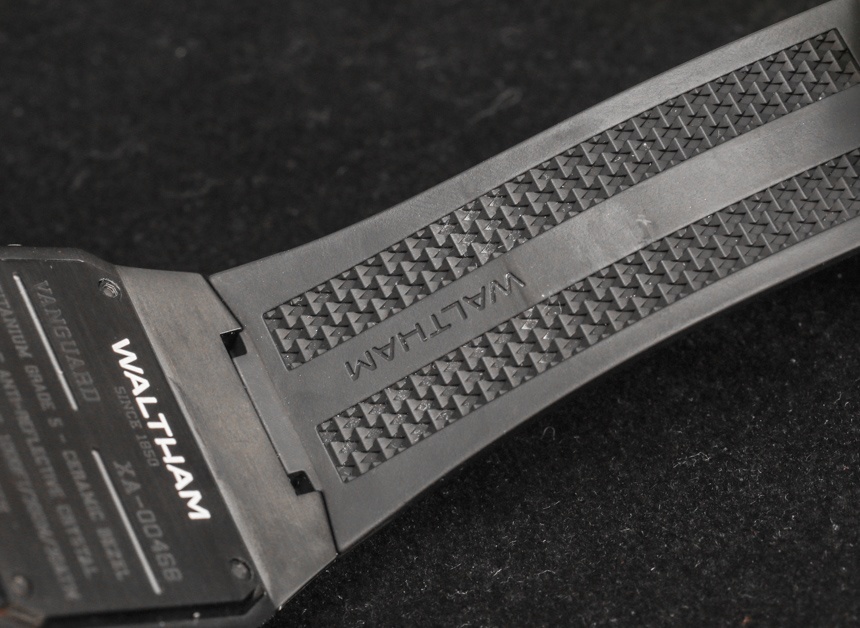 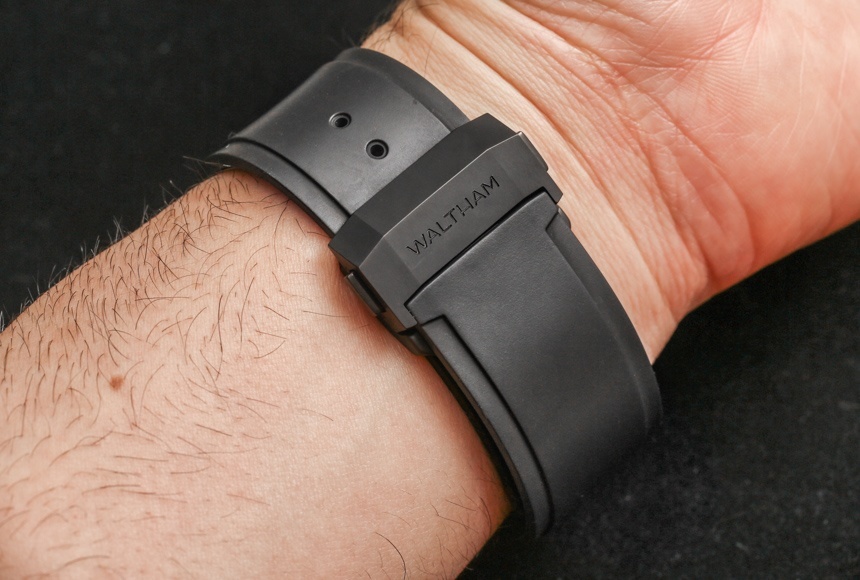 Attached to the Waltham Aeronaval CDI Black Matter watch is a thick black strap on a black-coated titanium deployant clasp. Perhaps it is because the strap is so wide that the watch itself feels so secure on the wrist despite its size. According to Waltham, the strap is produced from vulcanized “VulCarbone” rubber and is reinforced with Nomex. A nice detail is that the inside texture of the watch strap mimics the texture on the inside of the watch face. 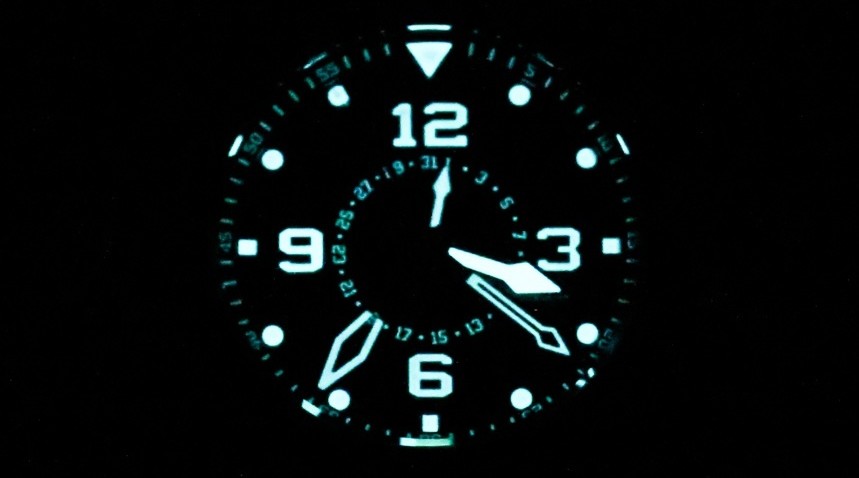 I will admit that it took me a long time to write the review of the Waltham Aeronaval CDI Black Matter. Sometimes, reviews come to me quickly, and other times, I need to think about the watch for quite some time. The Waltham Aeronaval CDI Black Matter was a watch I liked from the start, but the odd image branding and name combination with the theme of the company today just never felt quite right. Maybe it never will. I sort of feel as though the Waltham of today might be better off without the “baggage” from the Waltham of yesterday. At least, that would allow people to focus on exactly what the company is trying to do with their products. As it stands, I fear too many people will be hung up on trying to determine how the current brand image fits with their notion of the historical company. Perhaps there doesn’t need to be a synergy between these elements, but story-driven watch collectors will focus on that, for sure.

Right now, I am going to carefully watch Waltham to see what comes next and where the brand goes. They do have my attention, that is for sure. The Waltham Aeronaval CDI Black Matter has a price of just over $8,000 – which is on the higher side, certainly, but not totally insane. With that said, for the same money, you can buy a Rolex Submariner Date, so Waltham at first will likely be a product seasoned watch collectors with established collections will seek out rather than attracting too many timepiece novices looking for their first major watches. The Waltham Aeronaval CDI Black Matter has a retail price of $8,200. waltham.ch

Necessary Data
>Brand: Waltham
>Model: Aeronaval CDI Black Matter ref. W/DB-002.3
>Price: $8,200
>Size: 47mm
>Would reviewer personally wear it: Yes
>Friend we’d recommend it to first: Someone who has tested the big sport watches from the major brands and is ready for something different. Or perhaps a Waltham name lover who wants a modern macho watch.