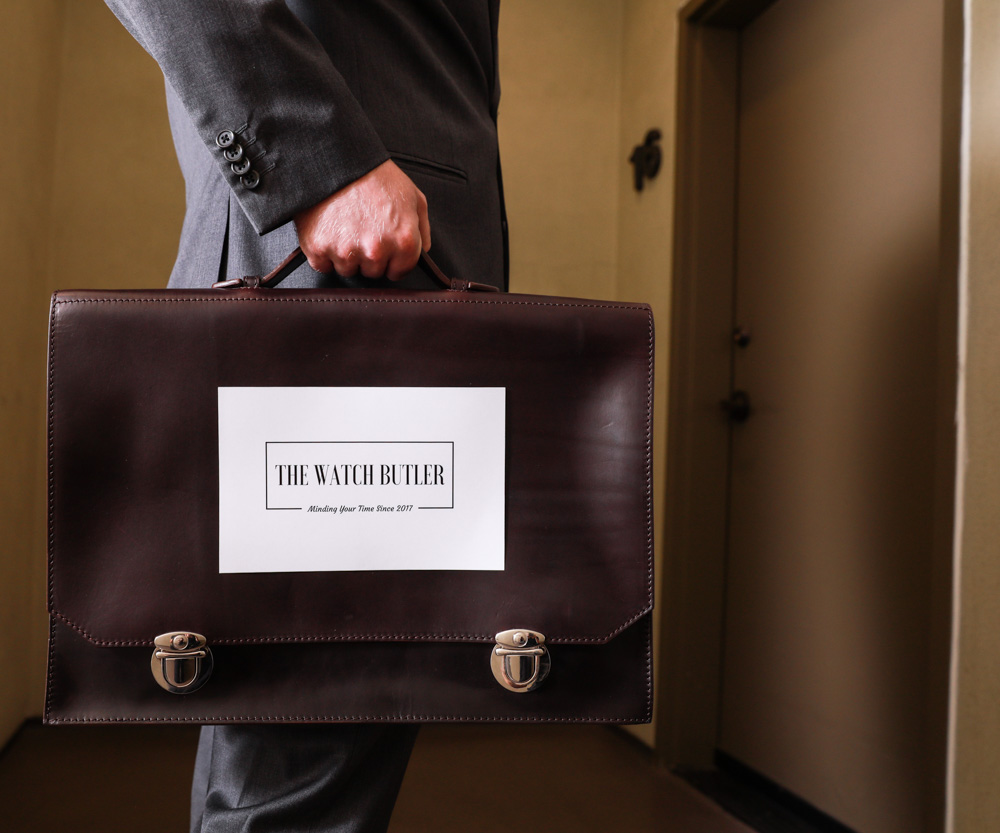 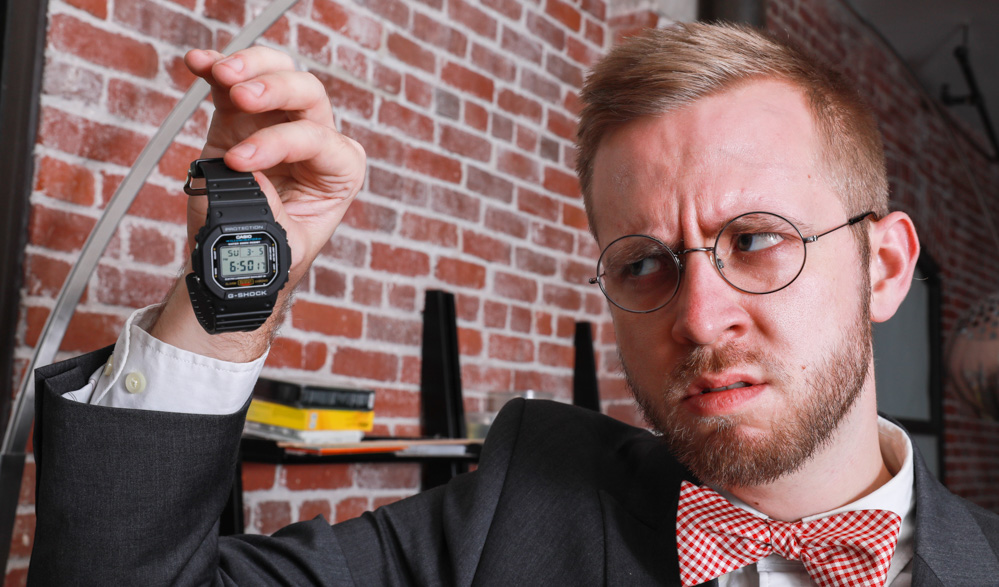 The Making Of A Watch Butler

For now, The Watch Butler is a solo operation, but his name was presented to him by another prior to this new life. The Watch Butler is not shy about his abandoned career ambitions that led him to watch butlering. His highest former ambitions seem to have been watchmaking or some type of deeper, or more technical interaction with timepieces. The Watch Butler speaks fondly of his limited time in watchmaking school, but he was not among those who completed the training to the end. Apparently, while pursuing his watchmaking education, teachers and school staff noticed how distraught this young student was around timepiece movements being disassembled. His reaction was apparently that of someone squeamish watching a human being undergoing serious surgery. The Watch Butler has a deep and sensitive fondness for the life (and pain) of watches. 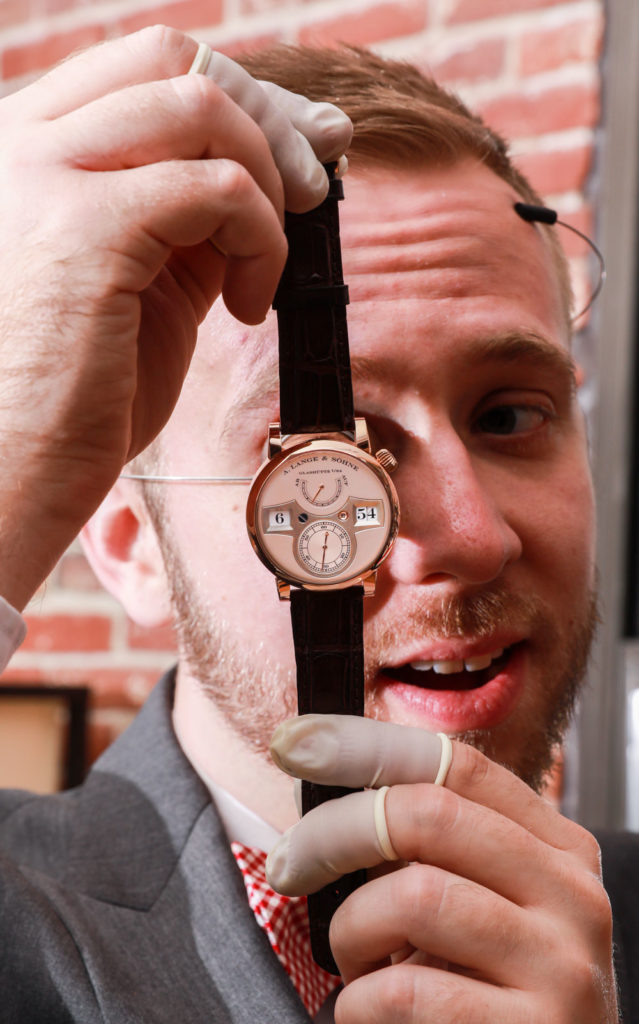 Unwilling to engage in further training and complete important school tasks, the stress of failure apparently resulted in The Watch Butler choosing to spend most of his time cleaning and polishing watches, while apparently obsessively setting the time on watches he found laying around to the correct moment – whether or not they were being used. A fellow student less than amicably referred to the nervous fellow as a “watch butler” one day when joking about the odd behavior. Overhearing the comment, the nickname stuck and was internalized as a new personality and a new direction in life. 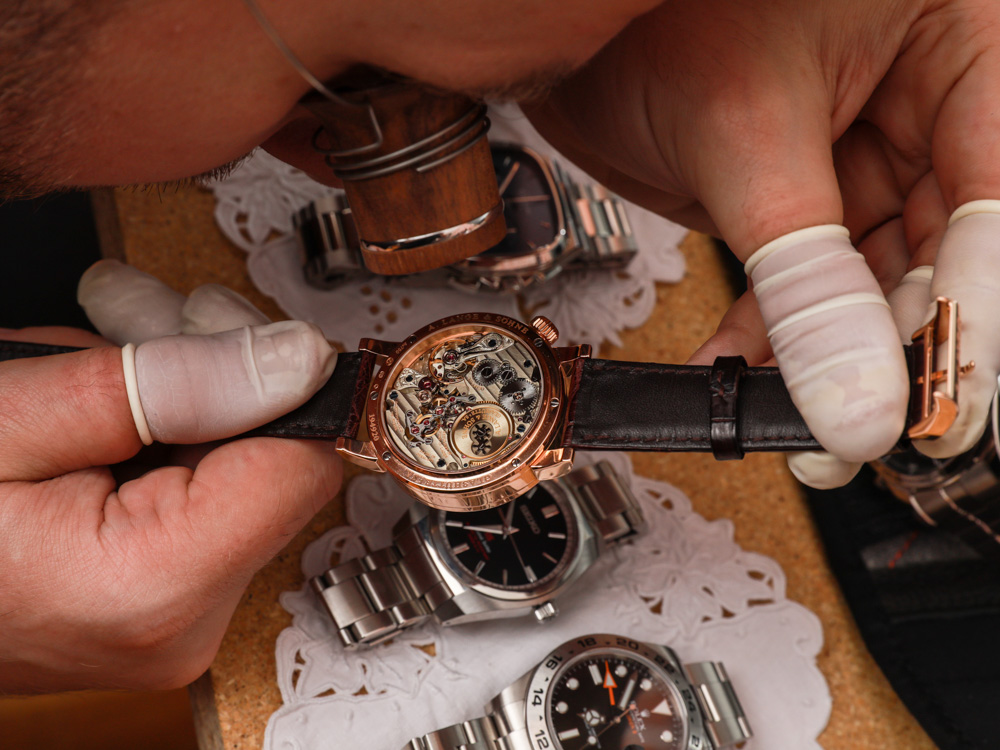 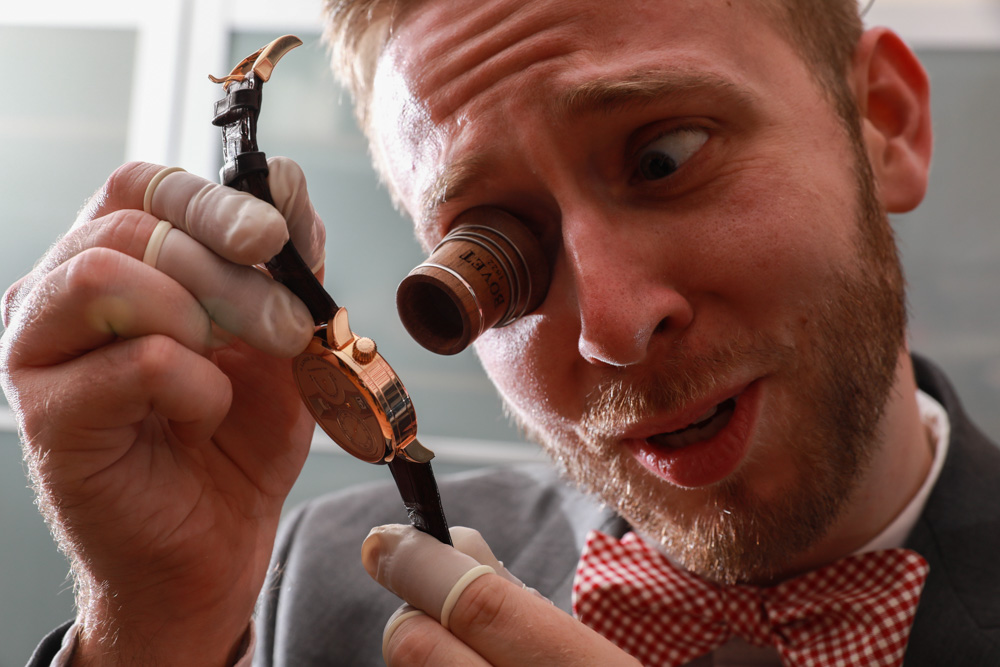 With little else but hope in his heart and a drive to interact with mechanical timepieces as much as possible, The Watch Butler moved back to his native Southern California and began showing up at watch lover gatherings. Wearing as close to a butler’s outfit as he could apparently muster, his new direction as a watch service provider would deliver the meaning and professional satisfaction he had long been yearning for. 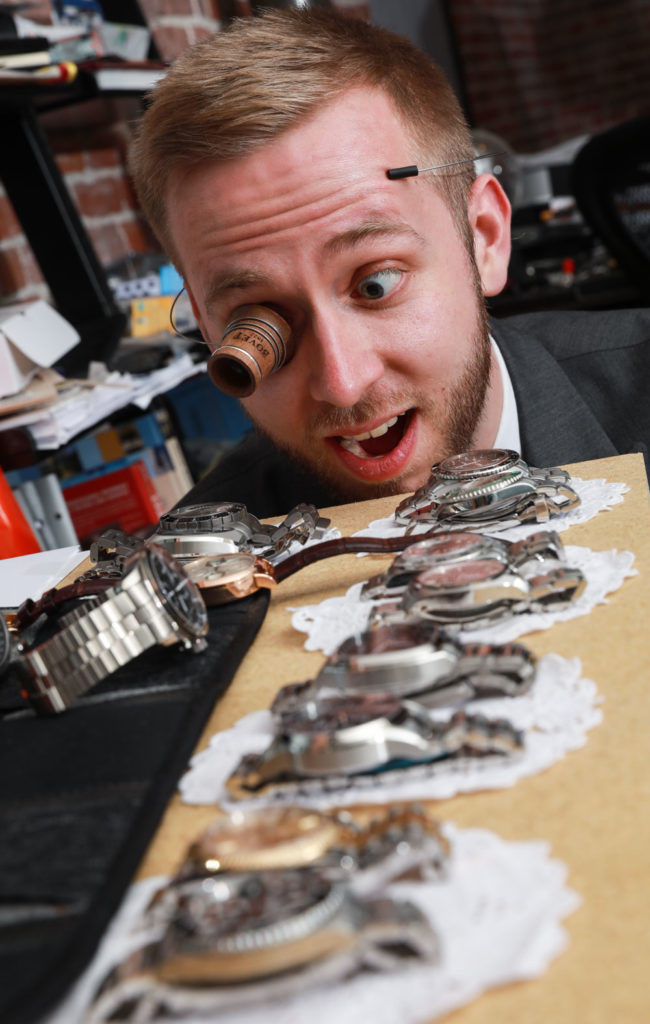 A Day In The Life Of The Watch Butler 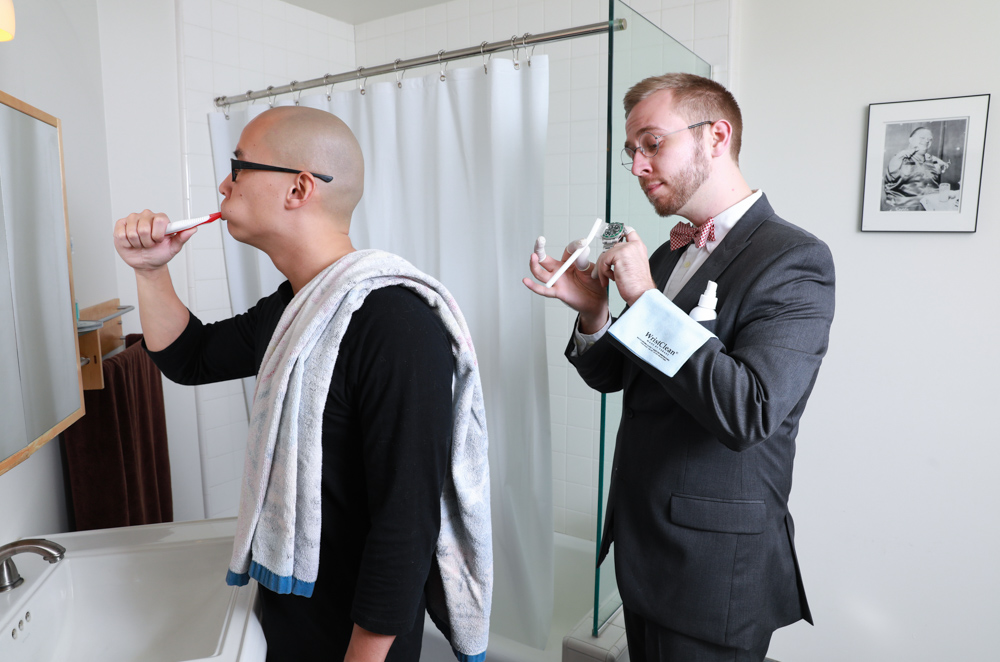 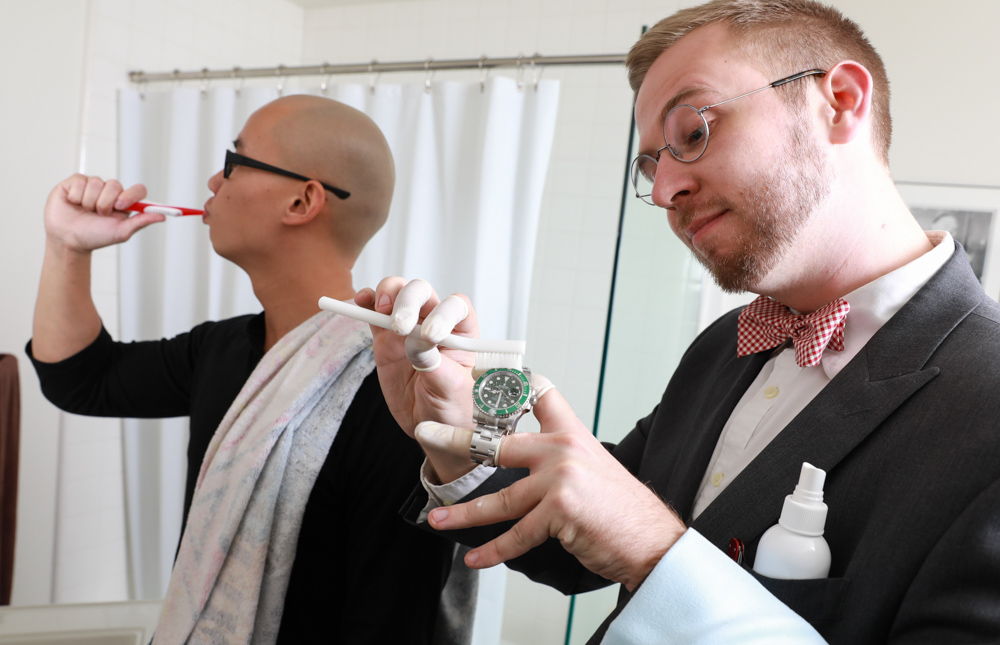 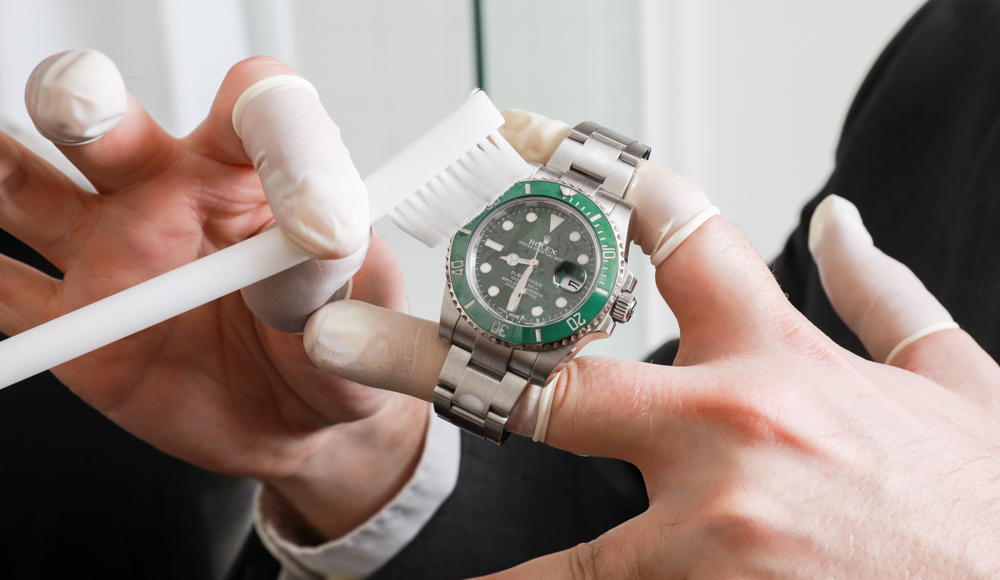 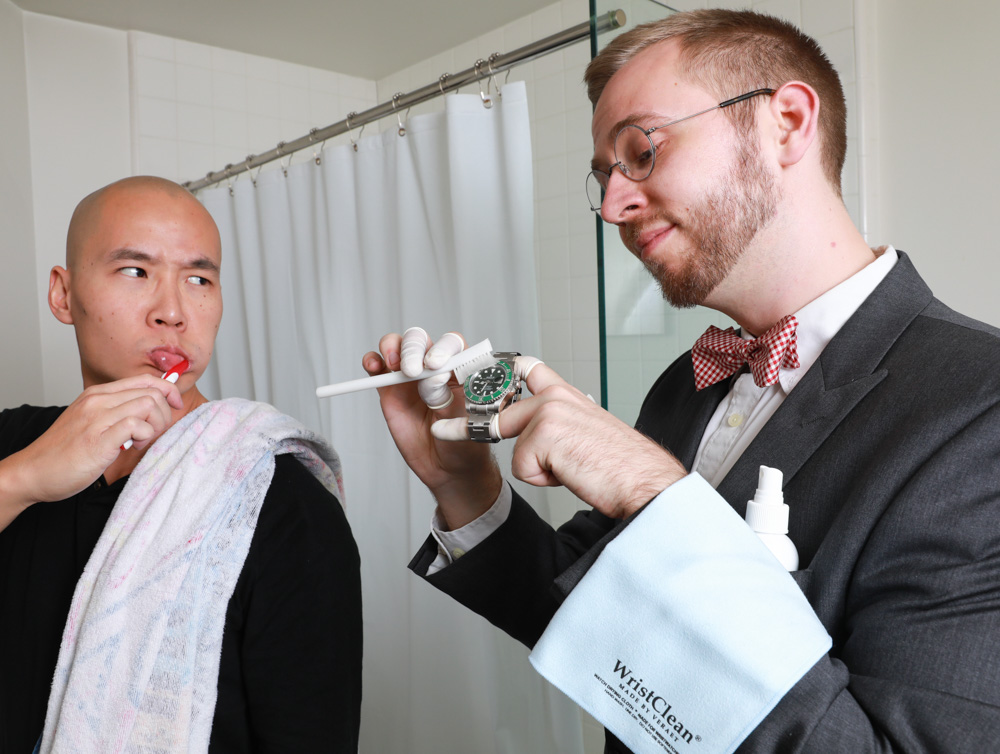 Bringing a kit full of cleaning supplies and other tools, The Watch Butler carefully inspects, cleans, and adjusts a collector’s entire collection. He even has a “report card” which keeps track of a timepiece’s accuracy, notes on its condition, and messages to and from The Watch Butler. Apparently, some clients merely put up with The Watch Butler who seems to not mind what others might consider unsavory working conditions. The Watch Butler sometimes spends so much time meticulously going over (or merely adoring) people’s watches that client’s have trained themselves to (for the most part) ignore his presence. In many ways, this is what those who hire “house help” in days long since made obsolete by social and technological progress would do with their servant staff – and as such, The Watch Butler doesn’t seem to mind (or pay clients’ disregard much attention). 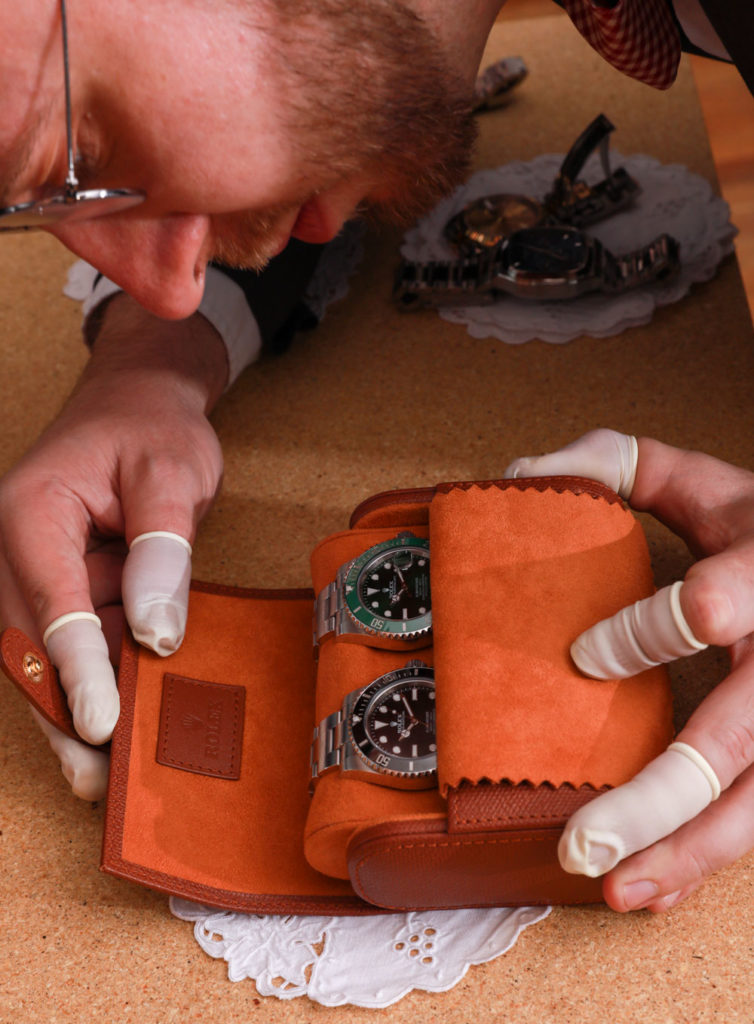 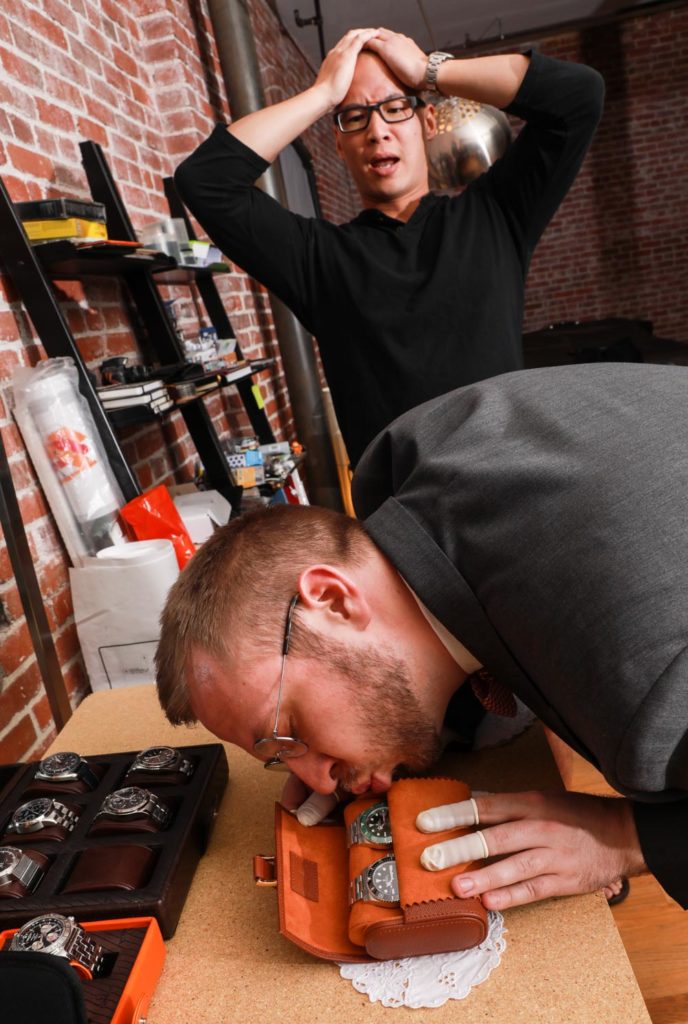 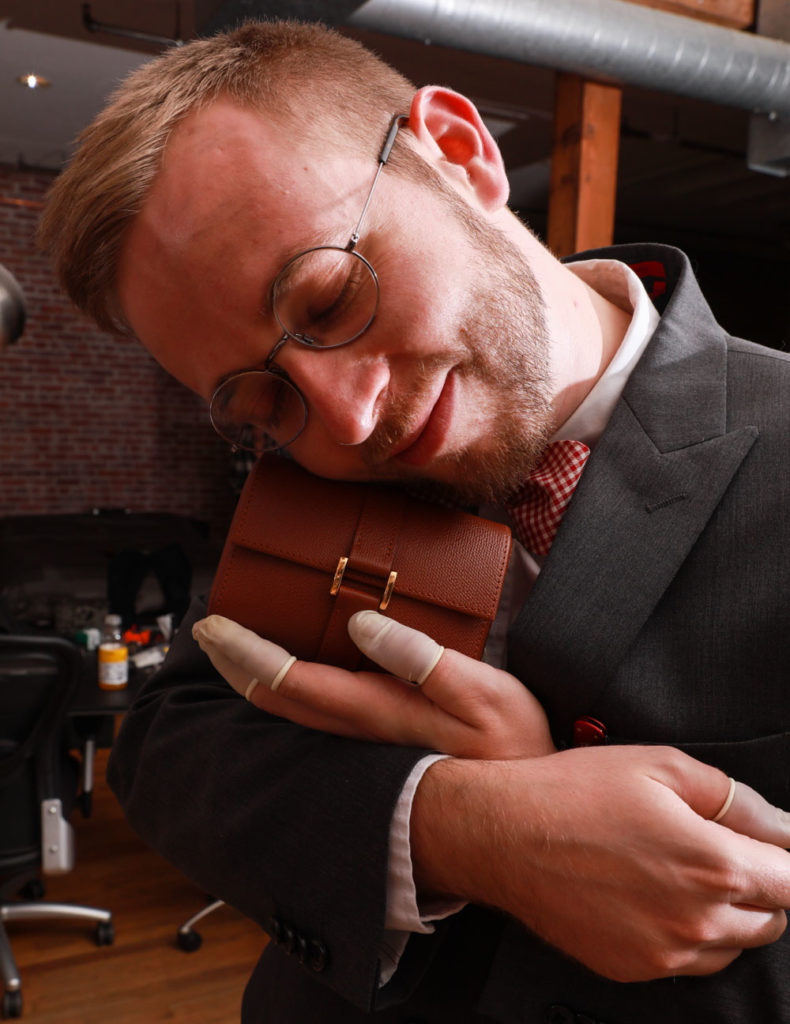 The Watch Butler himself – quizzically – isn’t known to wear a timepiece. The reason for this is unknown, and when asked, The Watch Butler simply responds that he would not want to make other watches he is coming to see jealous. Clients seem to have interpreted this attitude warmly as a sign that, at the very least, The Watch Butler is no security risk. If anything, the primary hesitation anyone with a collection of valuable goods has with inviting someone into their home is the threat of theft. Until now, despite being a relatively new service provider, no one seems to question The Watch Butler’s trustworthiness.

Clients report that he takes far better care of their watches than they do and, further, that The Watch Butler seems to be wholly disinterested in material items other than timepieces. Moreover, clients trust The Watch Butler to leave and come back with their watches to get them serviced or for other repair needs, and so far, this butlering watch caretaker seems only interested in returning the timepiece home as hastily as possible. Either The Watch Butler is a trusted, no-security-risk service provider, or he is a master of deception and cunning. Most seem to agree it is more likely than not the former. 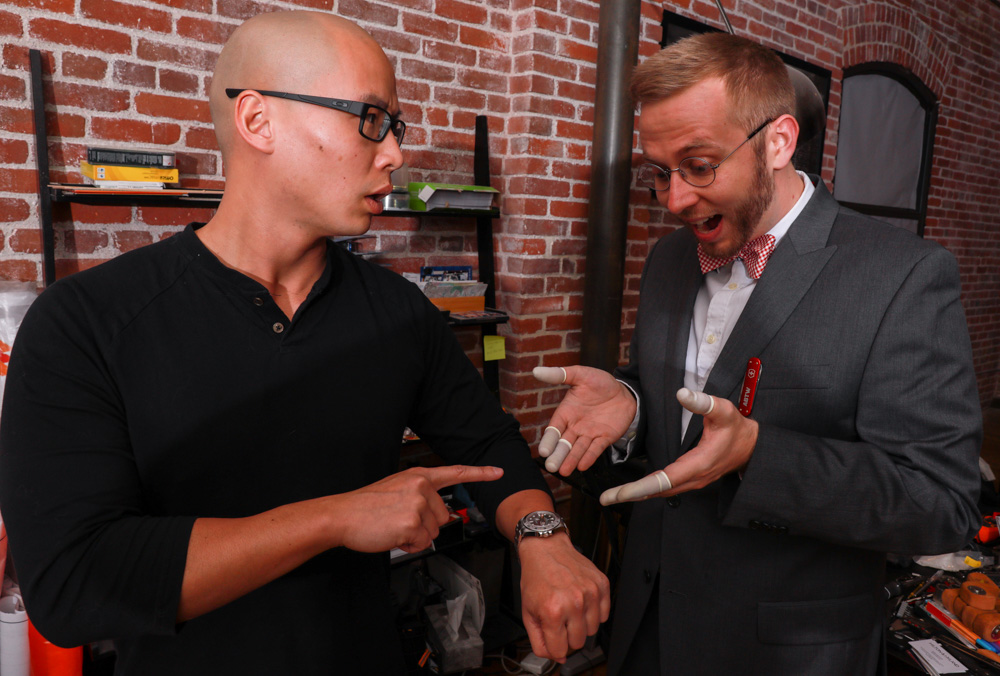 If there is one complaint leveled against The Watch Butler, it is directed at his level of dedication to his work. There are times, it seems, when he fails to recognize the larger priority of responsibilities his clients have – ironically, when it comes to the matter of time. Apparently, The Watch Butler can get so caught up in his work, that he will remain at a client’s home for hours, carefully winding, setting, cleaning, winding again, and at times polishing timepiece cases as though he were administering a massage. 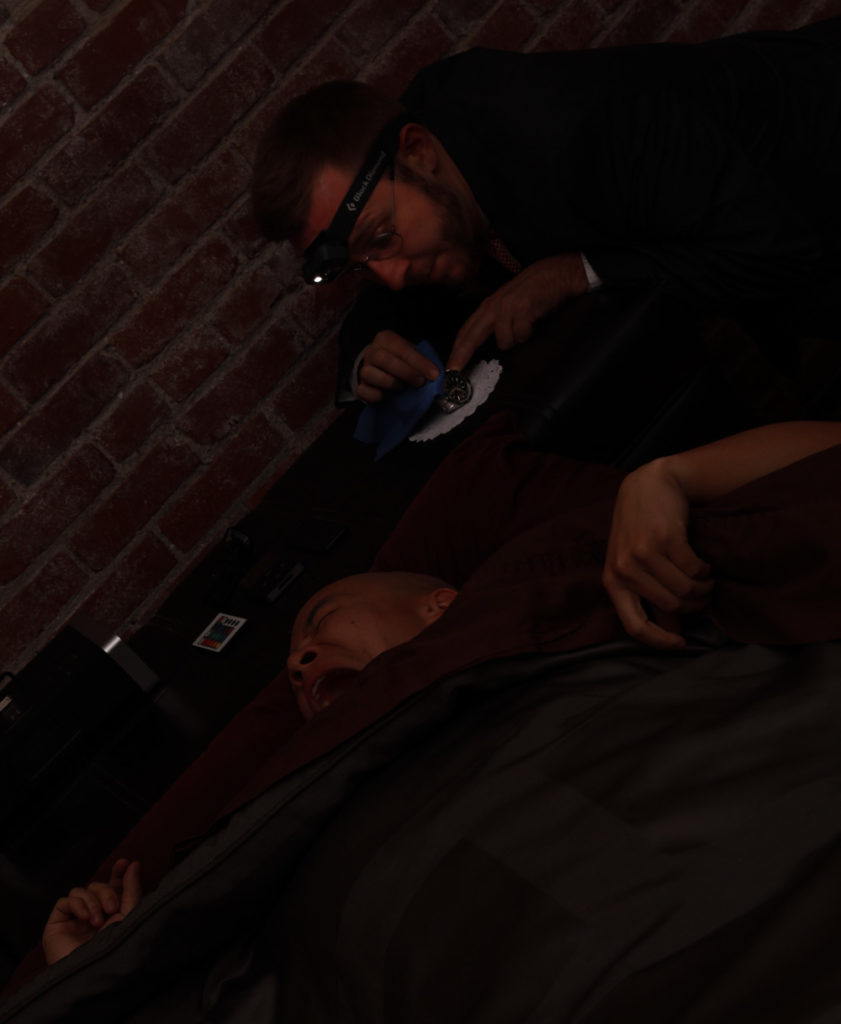 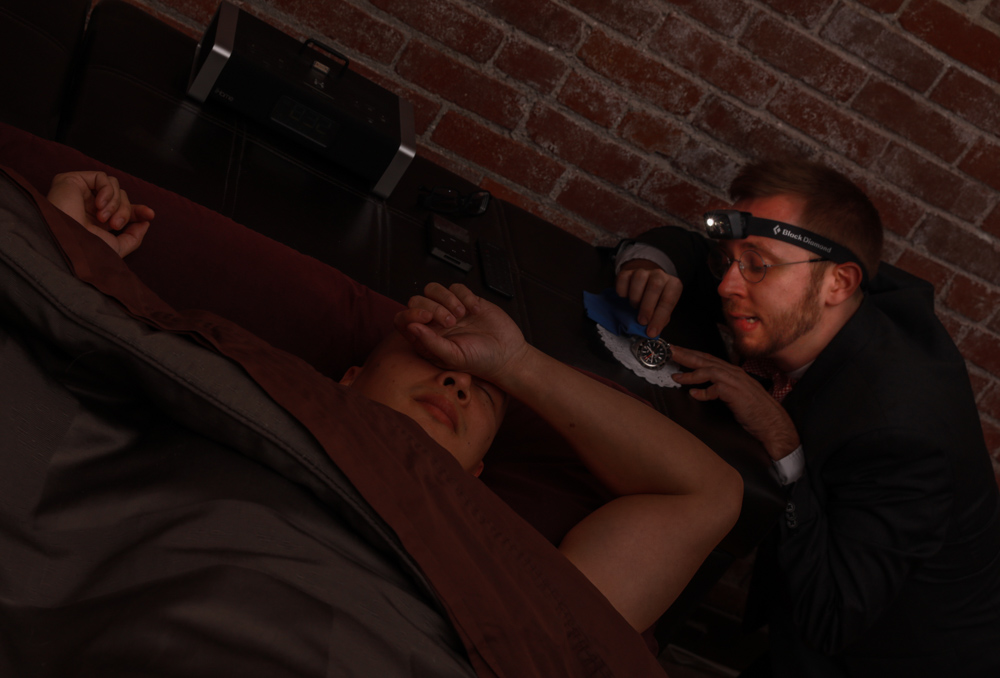 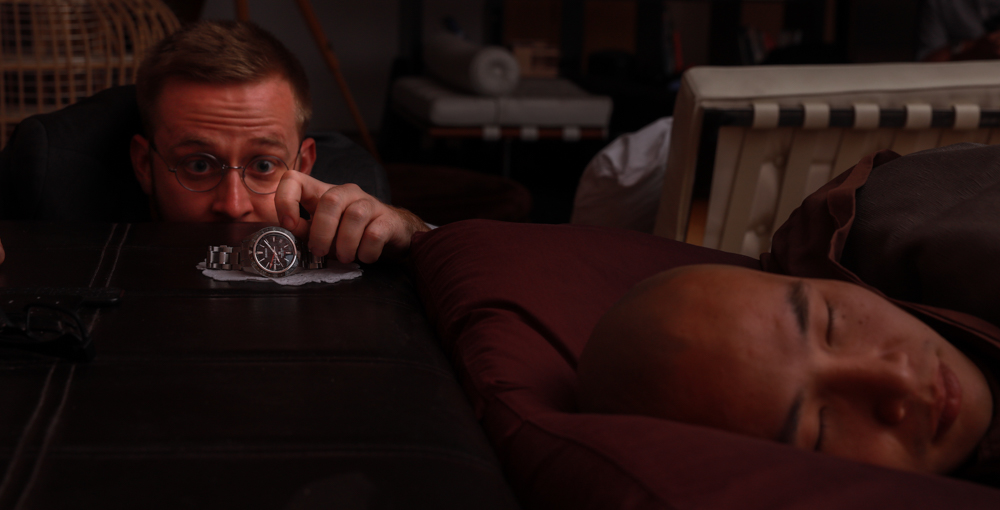 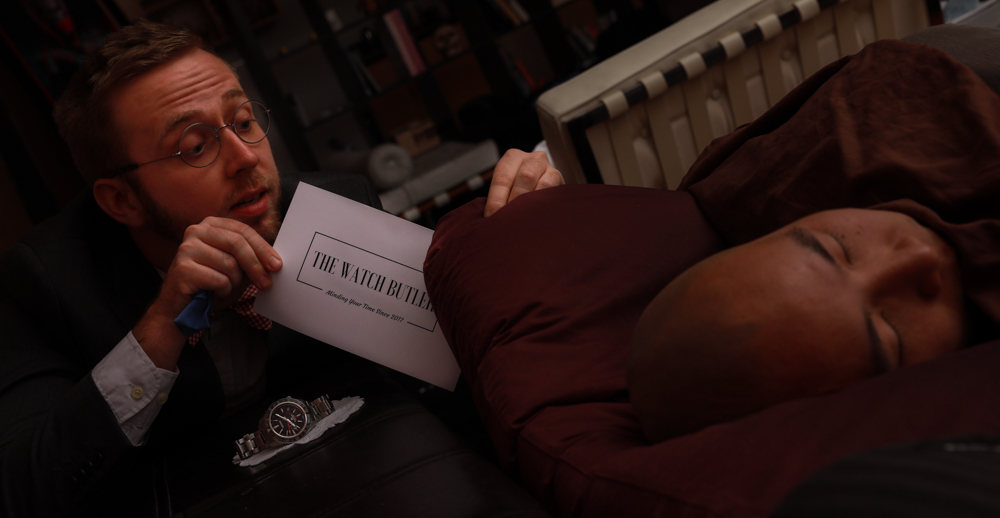 Despite understandable quirks, services rendered by The Watch Butler are a dream come true for many owners of multiple watches who under his care enjoy cleaner, healthier, more accurate and useful watches without doing all the work themselves. If only all timepiece owners were lucky enough to be under the care and horological protection of The Watch Butler.