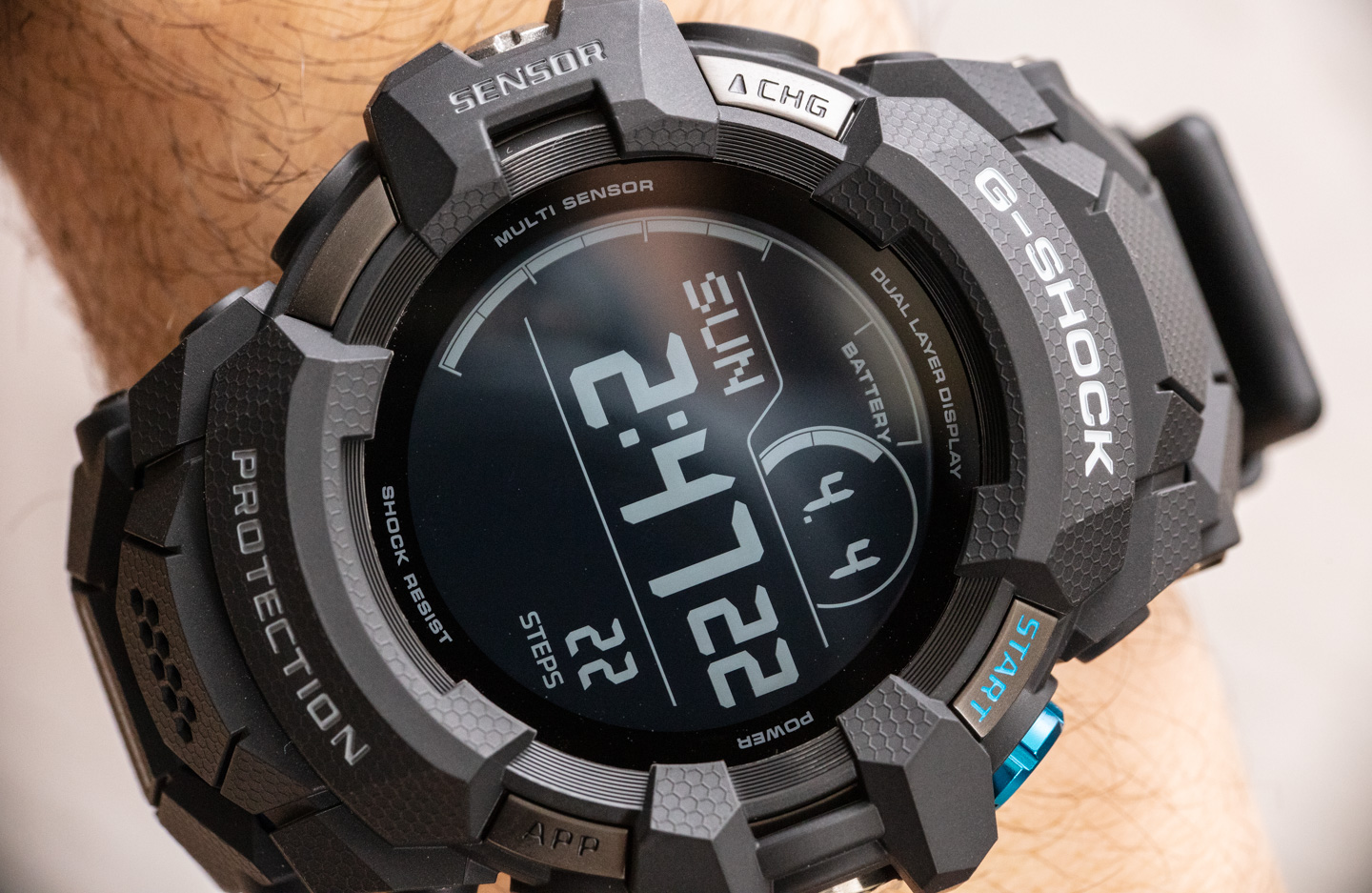 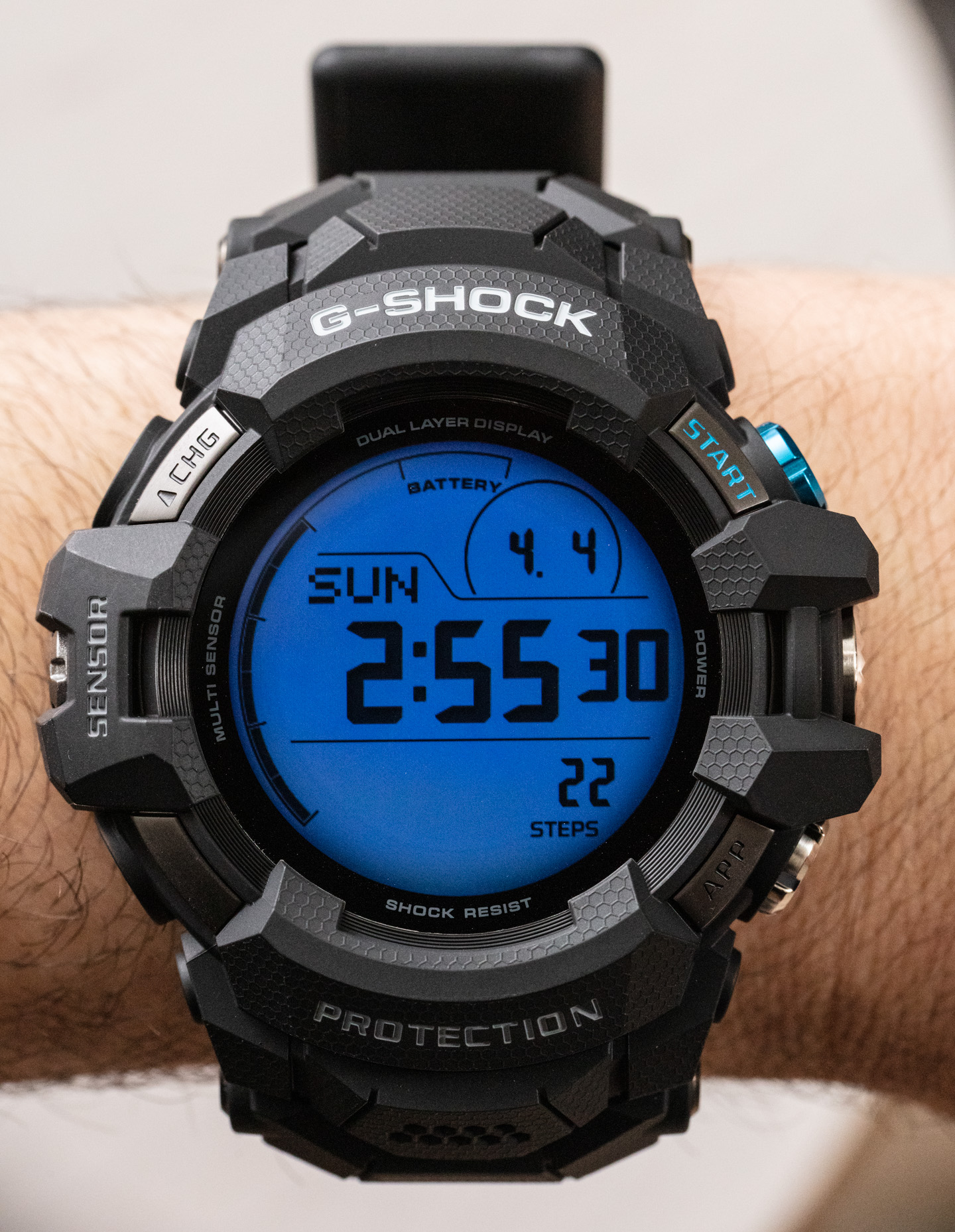 2021 sees the world’s first legitimate Casio G-Shock Smartwatch. The Japanese company has played with the merging of its traditional G-Shock product line and contemporary connected watches in the past, but never before was there a full-on G-Shock smartwatch — until the reference GSWH1000-1, that is. This is a Casio G-Shock case, with all its durability and style, mixed with a fully functional Google Wear OS smartwatch software platform.

This is a very cool product, but it is not the end of the line for the G-Shock watch. What I mean by this is that a smartwatch version of the G-Shock is a flavor, but it is not an automatic upgrade from the legacy “non-smart” G-Shock line. Instead, think of the G-Shock Smartwatch to be an evolutionary branch in the larger G-Shock product universe. It means that Casio is more than likely to continue investing in products for the smartwatch market with G-Shock branding but is also going to keep developing “autonomous” G-Shock watches that will probably remain its core bread and butter. 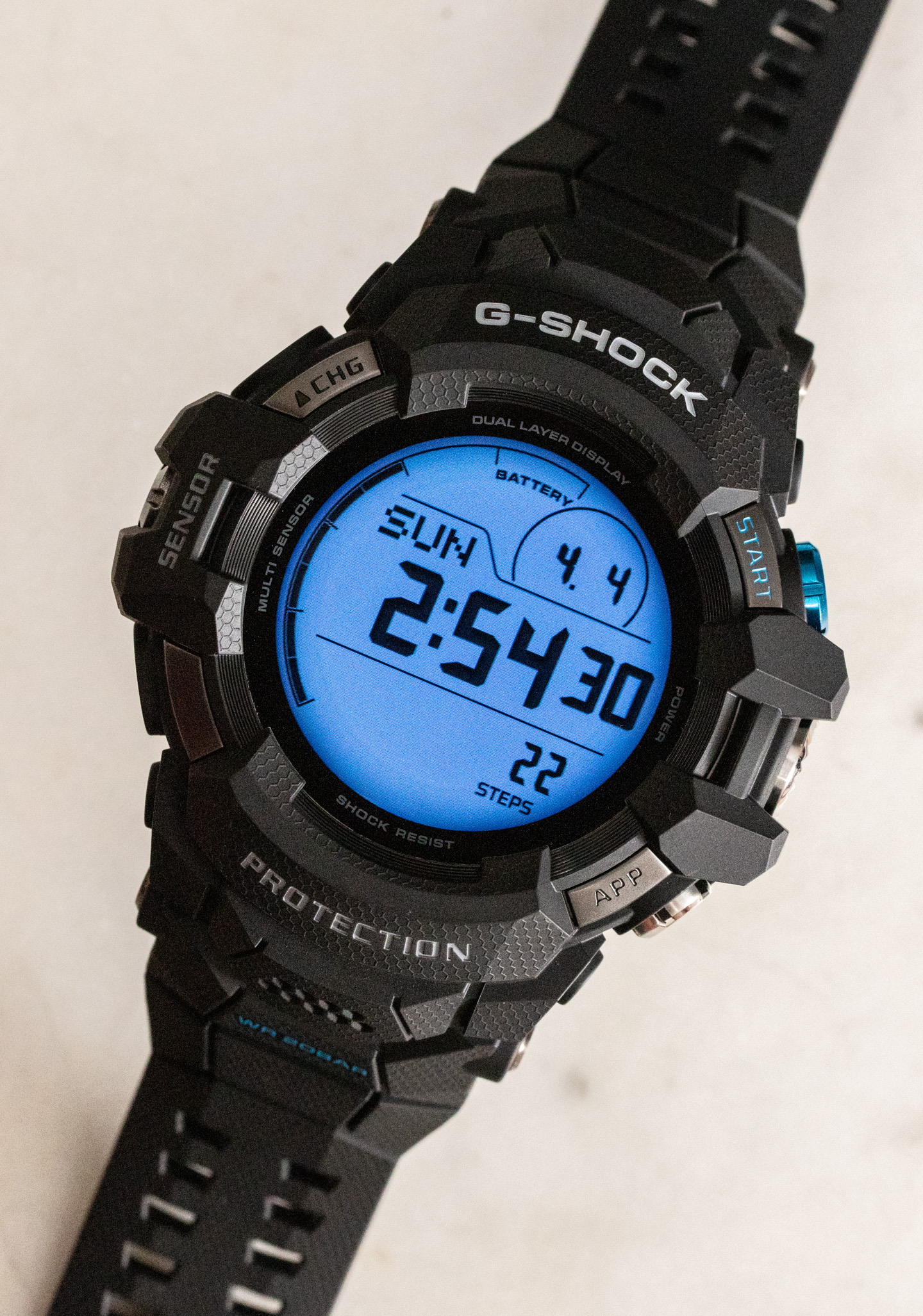 G-Shock DNA married into a smartwatch is an inherently good idea. The world’s most iconic gadget-watch universe mixing with the future of mainstream watches is something that, in principle, makes a lot of sense. The biggest divide between these worlds is actually between that of smartwatch technology and that of Casio’s engineers. The Japanese company likes to invent its own tech and deploy it when its veteran team of engineers feels like that technology is ready. They pride themselves on reliability and efficiency. This mentality is very much in contrast to that of most smartwatch software makers.

By contrast, smartwatch software development is mostly decentralized, and new versions are often valued on how much they improve upon the last version — not on how perfect they are. Thus, smartwatch development is a constant moving target, while Casio’s culture likes to improve upon future products but also likes to release well-tested machines meant to stand the test of time. The result in the G-Shock GSWH1000 is a case and wearing experience that is all Casio G-Shock with an interface and modern features that is all Google Wear OS smartwatch. It’s a suitable merging of both worlds, even though it isn’t quite the same thing as a product that has both software and hardware developed in-house at Casio. 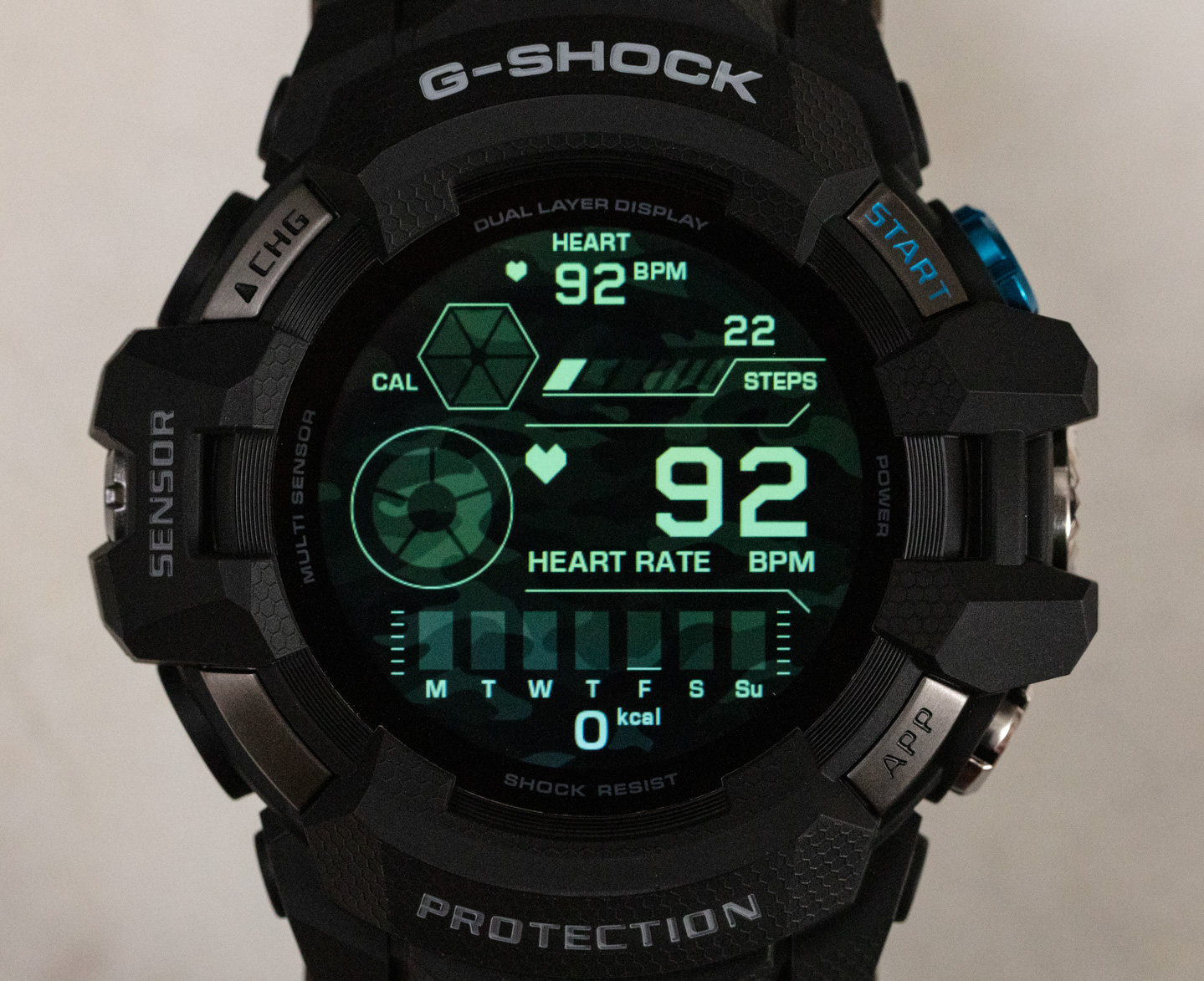 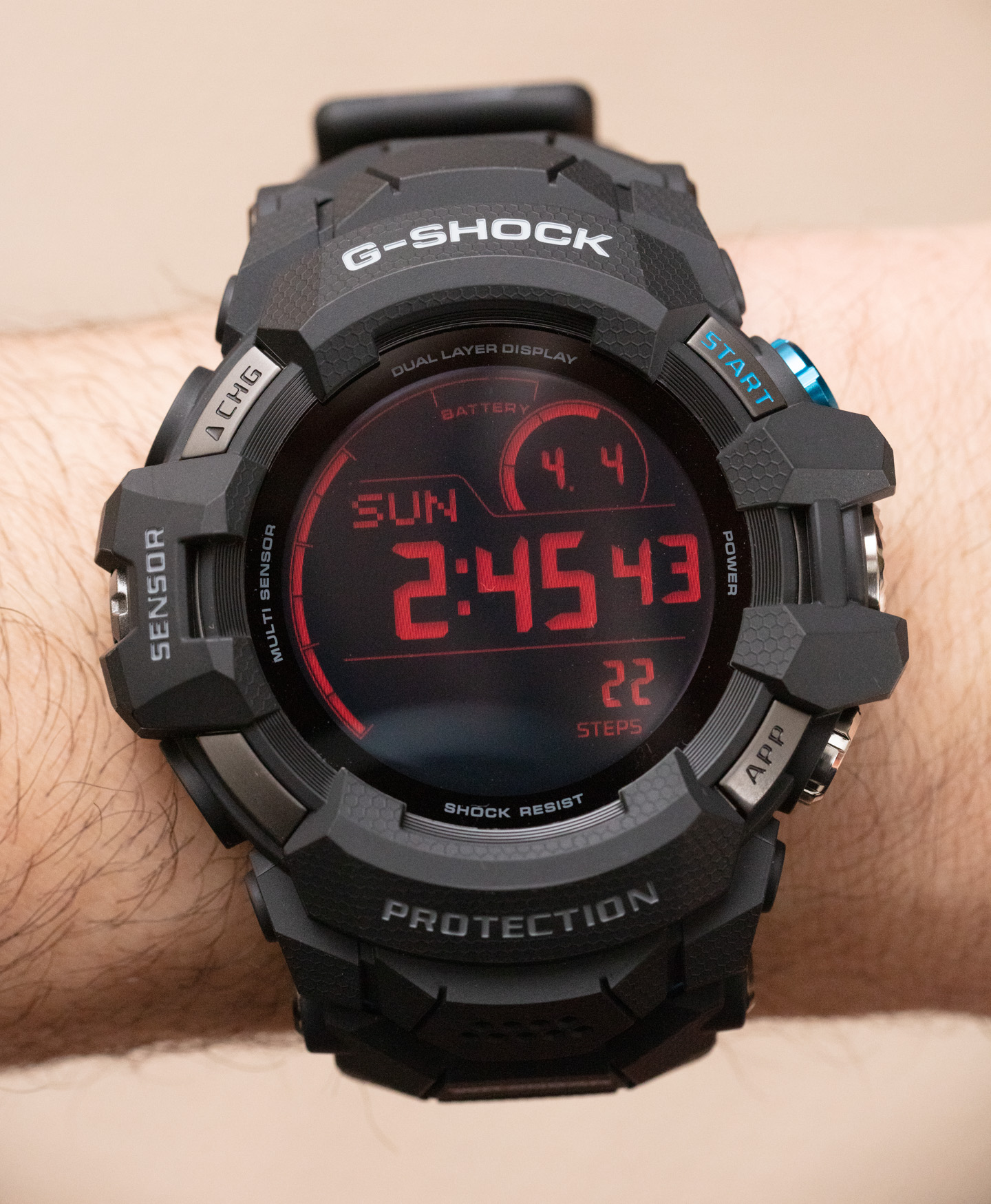 That said, the GSWH1000 does have a bespoke Casio software interface overlap that offers a lot of functionality, such as different feature screens and applications. In essence, Casio actually provided an experience in which you have the choice to very minimally interact with the base Wear OS software (if you want to avoid it, that is). This means that Casio was clearly cognizant that a lot of people would want a Casio smartwatch to feel as “on-brand” as possible. I think this is one of the best things that can be said about the first G-Shock Smartwatch, even if future products will, no doubt, further define what the G-Shock Smartwatch software experience can be like.

Casio has produced a few Wear OS smartwatches in the past, as well as a number of connected G-Shock watches. What makes the GSWH1000 special is that it is the first G-Shock-branded smartwatch Casio has made. That means Casio has been able to imbue the product with all the classic durability and shock-resistance that the G-Shock product is known for. That includes a case water-resistant to 200 meters, as well as a lot of armor-plating around the hardware innards to protect them from the type of abuse that G-Shock watches are engineered to withstand. 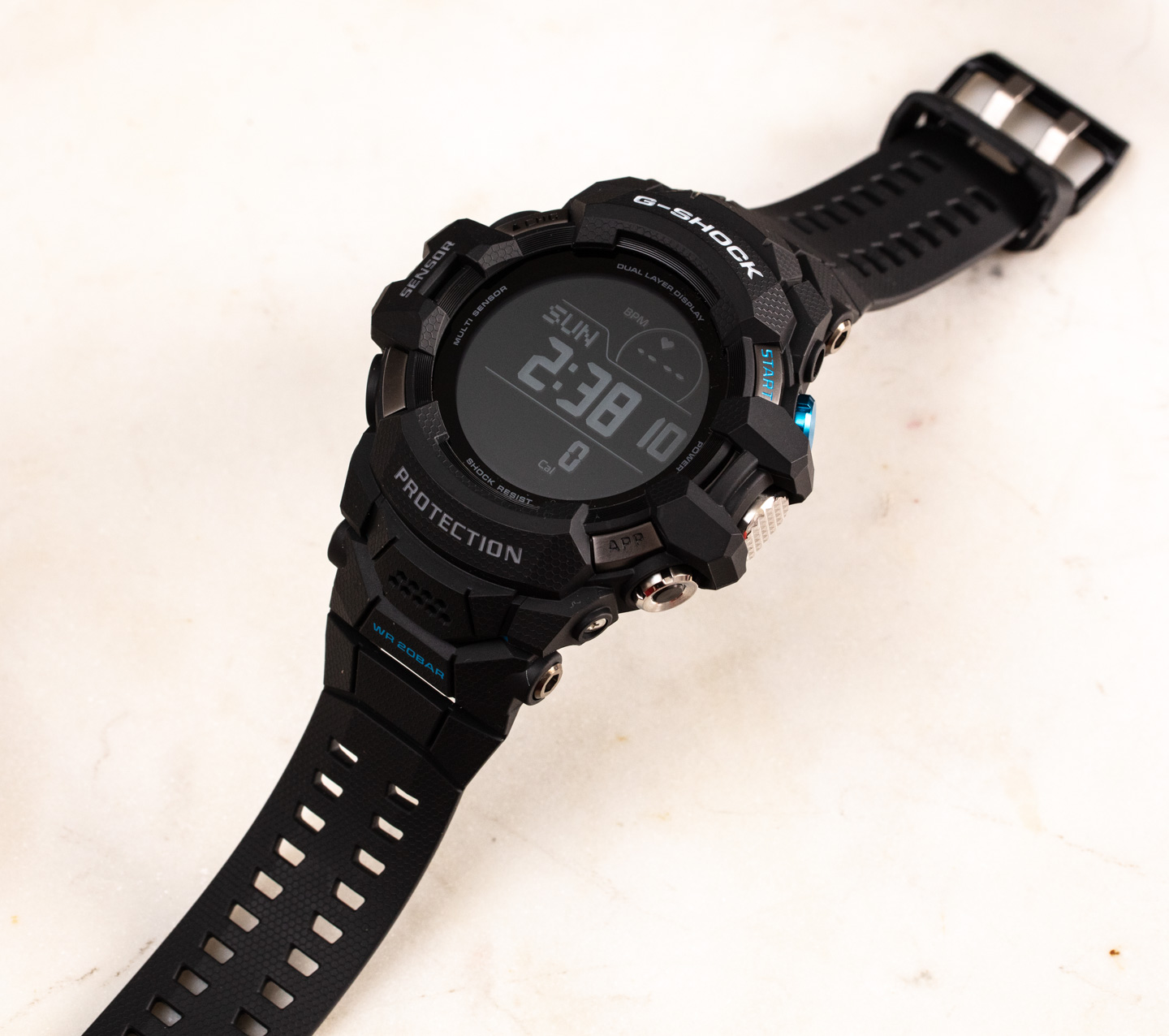 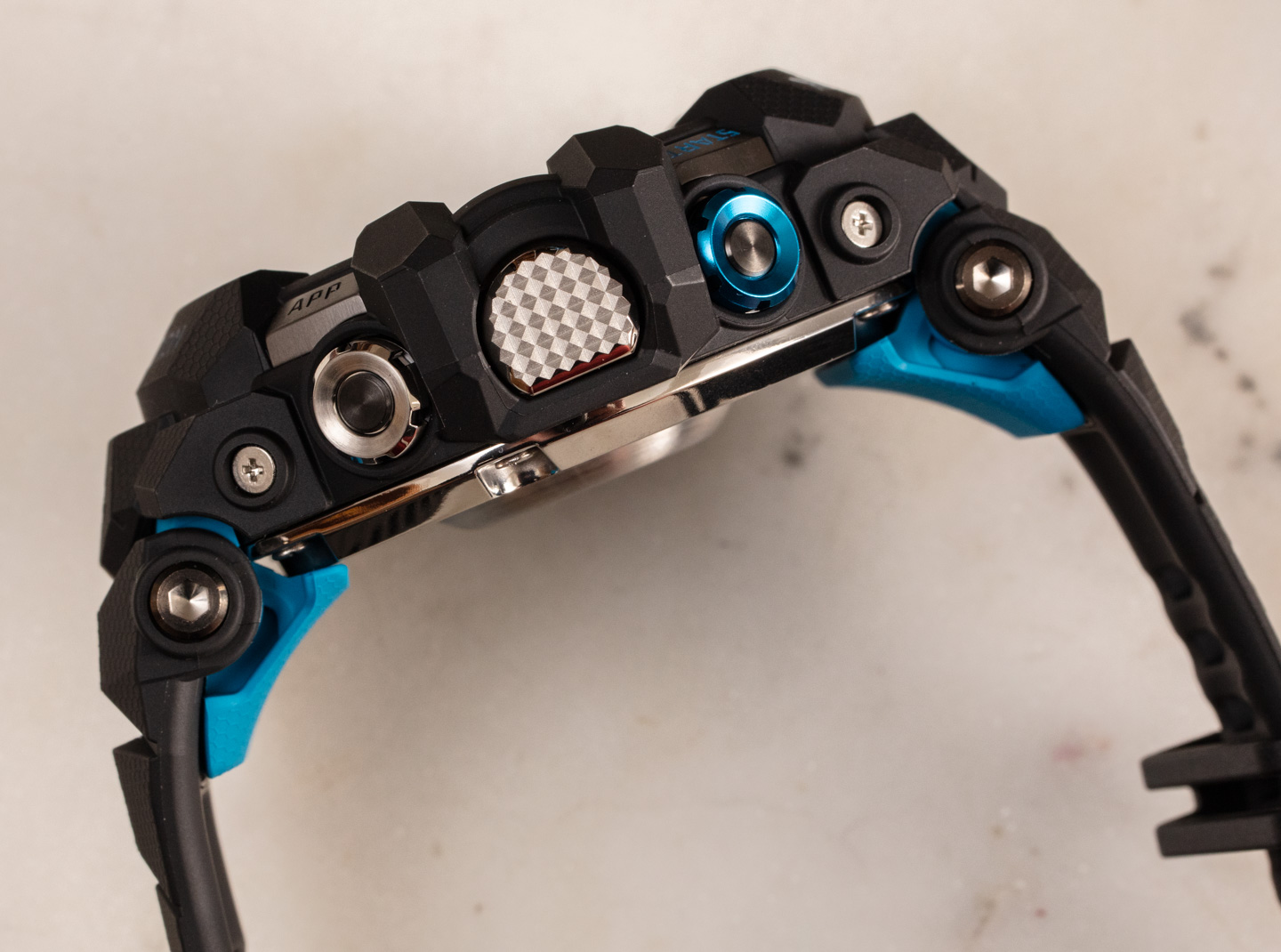 Casio designed the watch with a lot of comfort in mind — even if it is a larger watch. The resin case has an interesting surface pattern that gives it a more high-end look. Metal parts in the case construction also help the watch look sharp and “premium.” Over the screen is a mineral crystal, though, at this price, I would have perhaps wanted a sapphire crystal (which Casio has done on some other high-end G-Shock models). The case is 56.3mm-wide, 19.5mm-thick, and has a 65.6mm lug-to-lug distance. It actually isn’t all that heavy at 103 grams. Like other G-Shock watches, Casio designed the GSWH1000 with inserts under the lugs so that the case more comfortably wraps around the wrist. Even though this is a large watch, it wears quite comfortably.

The watch hardware includes a heartbeat monitor on the titanium metal caseback. It also include GPS and the typical slew of sensors and features that smartwatches have (such as a microphone, speaker, vibrating alert, etc…). Casio claims about 1.5 days of battery life but up to a month in time-only mode. Casio has made use of its dual-layer LCD screen technology to good effect. There is essentially a transparent LCD screen above the main 1.2-inch wide touchscreen. I have to say that Casio really got the screen experience correct, as much as possible, given technological and battery-life limitations. 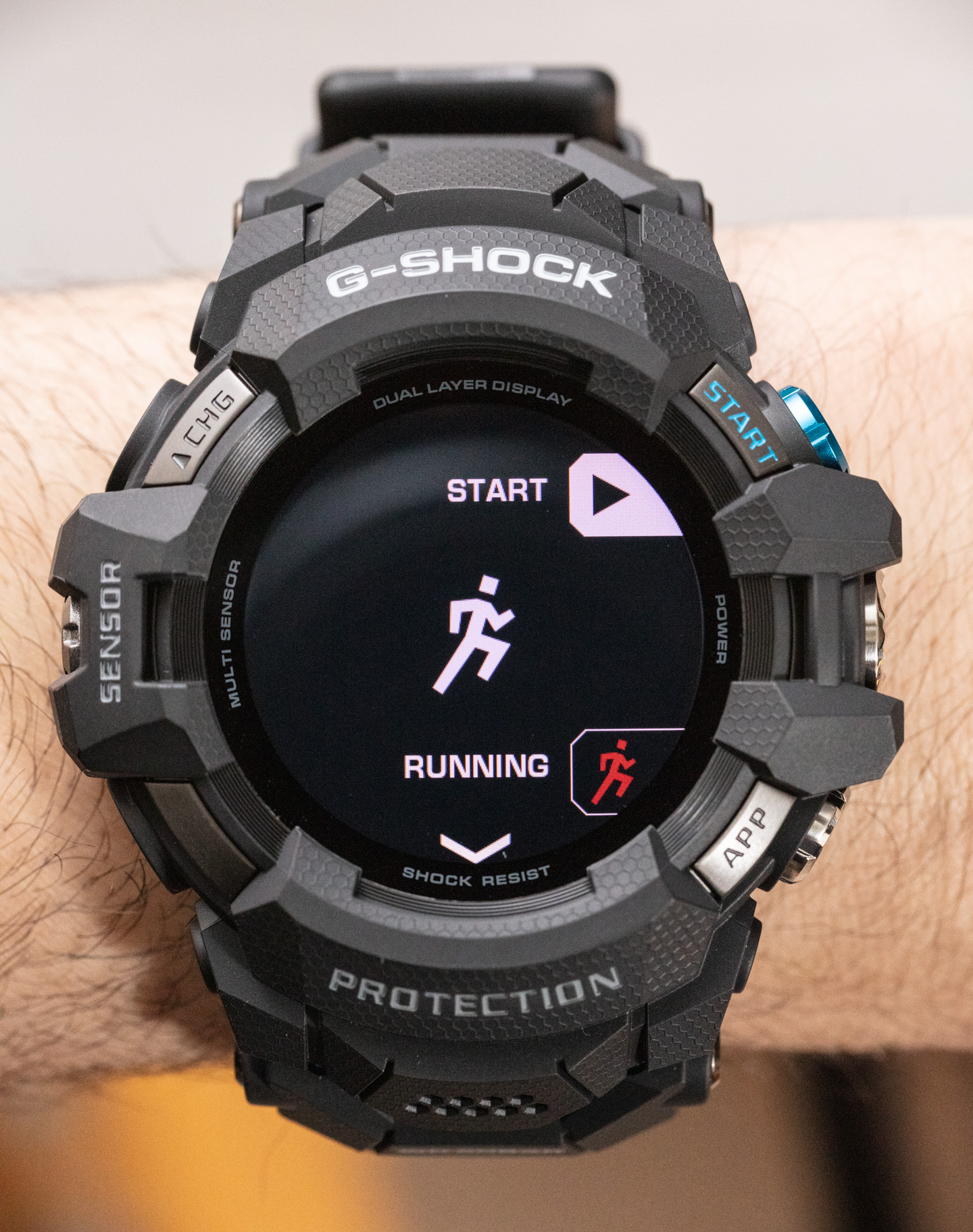 Casio’s software experience is pretty good but, of course, limited by factors beyond Casio’s control. Rather than deploy a stock Wear OS experience with just some Casio-branded watch faces, the GSWH1000 has a software suite of various applications and tools that make sense given the sports/outdoor theme of the smartwatch. Casio refers to the product as a “multi-sport” smartwatch, with features designed to help track activities, adventures, fitness, and travel. The watch also pairs with Casio’s G-Shock Move smartphone application, which is a nice complement to the core experience. 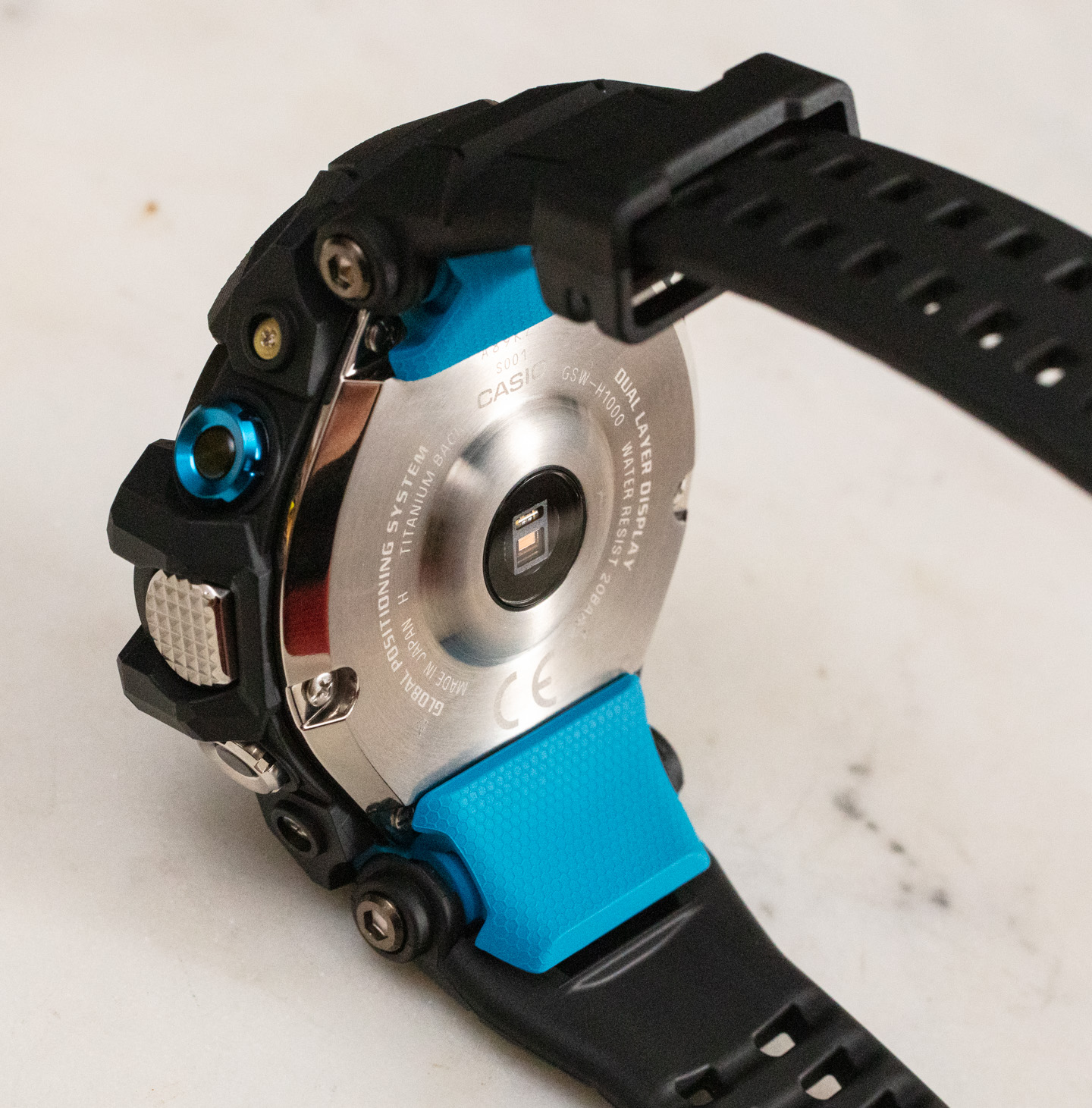 The watch offers nothing remarkable in terms of its core smartwatch experience (given that most Wear OS products offers more or less the same features), but the G-Shock part of the exterior hardware and exclusive software give the GSWH1000 watch some much needed personality over a lot of the competition. I will say again that I want even more dial variety. Casio can and should pre-load dozens of smartwatch face options, as opposed to just a few. The watch face screens that come stock with the GSWH1000 are all fine, but I just don’t see any reason why there aren’t a lot more of them.

Casio’s first G-Shock smartwatch is a very successful product, even if the market is knows it will be upgraded in about a year’s time. It comes with a premium price that makes it clear Casio wants to compete with the smartwatch big names such as Garmin and Apple. Casio often comes in with a product that is attractively competitive in a crowded marketplace, but more and more, the brand is asserting itself as a maker of premium products. In a lot of ways, Casio is absolutely correct to position itself that way.

In addition to this black with blue trim GSWH1000-1 reference of the watch, Casio may very well release a few other color styles over the next several months. While Casio faces stiff competition from Garmin and Apple, both of those companies have products with different software experiences. If you have a Google Android OS-powered phone and want one of the coolest multi-sport watches around (that at a glance doesn’t even immediately resemble a traditional smartwatch), the Casio G-Shock GSWH1000 smartwatch is high up on a very short list of alternatives. Price for the Casio G-Shock GSWH1000-1 watch is $699 USD. Learn more at the G-Shock website here.