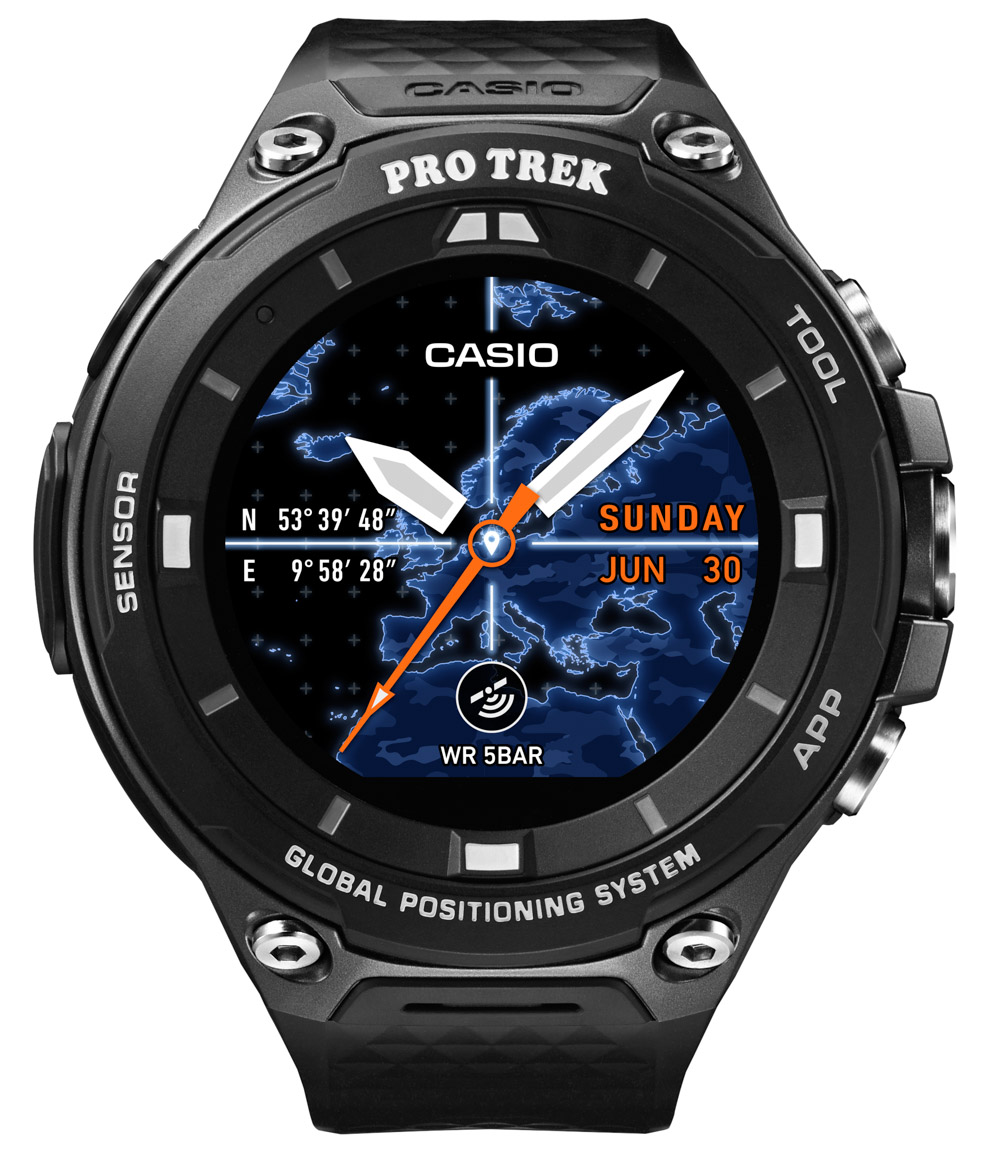 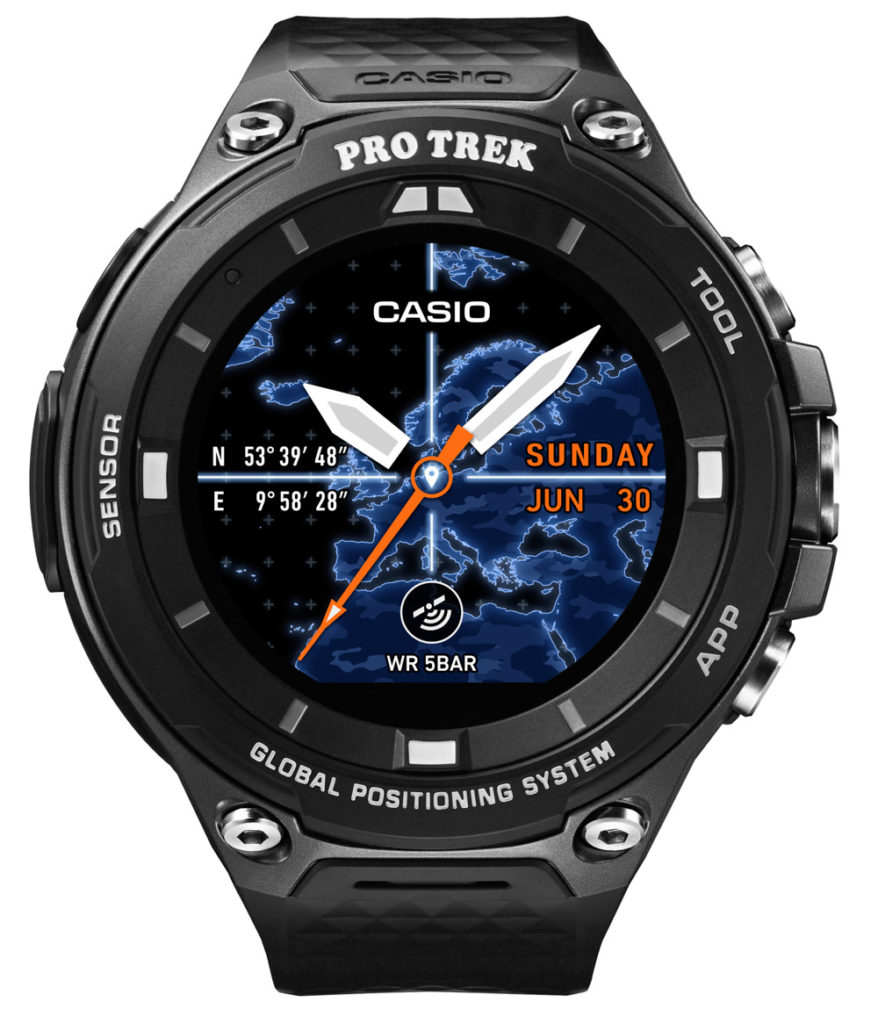 At CES 2017 in Las Vegas, Casio has just announced their second smartwatch, and it’s pretty cool. The Casio Pro Trek Smart WSD-F20 builds on last year’s WSD-F10 (debuted here and reviewed on aBlogtoWatch here) with an updated look but, more importantly, new and compelling functionality. Casio isn’t per se breaking new ground here, but is offering its loyal customer base an excellent outdoors-themed activity smartwatch that specializes in durability as well as “disconnected” capabilities.

The biggest news in the Casio Pro Trek Smart WSD-F20 is the inclusion of “low-power GPS.” GPS in smartwatches is becoming a must-have feature, and you’ll find it in everything from products made by Garmin to Apple – and of course, Casio. The brand is not new to GPS, especially power-sipping GPS modules designed to only occasionally connect to satellite signals in order to maximize battery life. The key element to Casio’s power savings while using GPS is that it only tracks location without having to download map data. This is important because the watch can track a GPS signal without having to use other connectivity functions.

This works because the Casio Pro Trek Smart WSD-F20 can optionally download map data directly to the device. The brand is quick to point that these these are highly detailed, full-color maps. I am not entirely clear on how this works, but the notion is that you can download maps for a specific area prior to needing them. Once they are in the device they can be used when the watch is “offline,” meaning its normal connectivity is turned-off, save for GPS connectivity. This is how it is able to boast “low power” GPS and still offer users the convenience of maps. 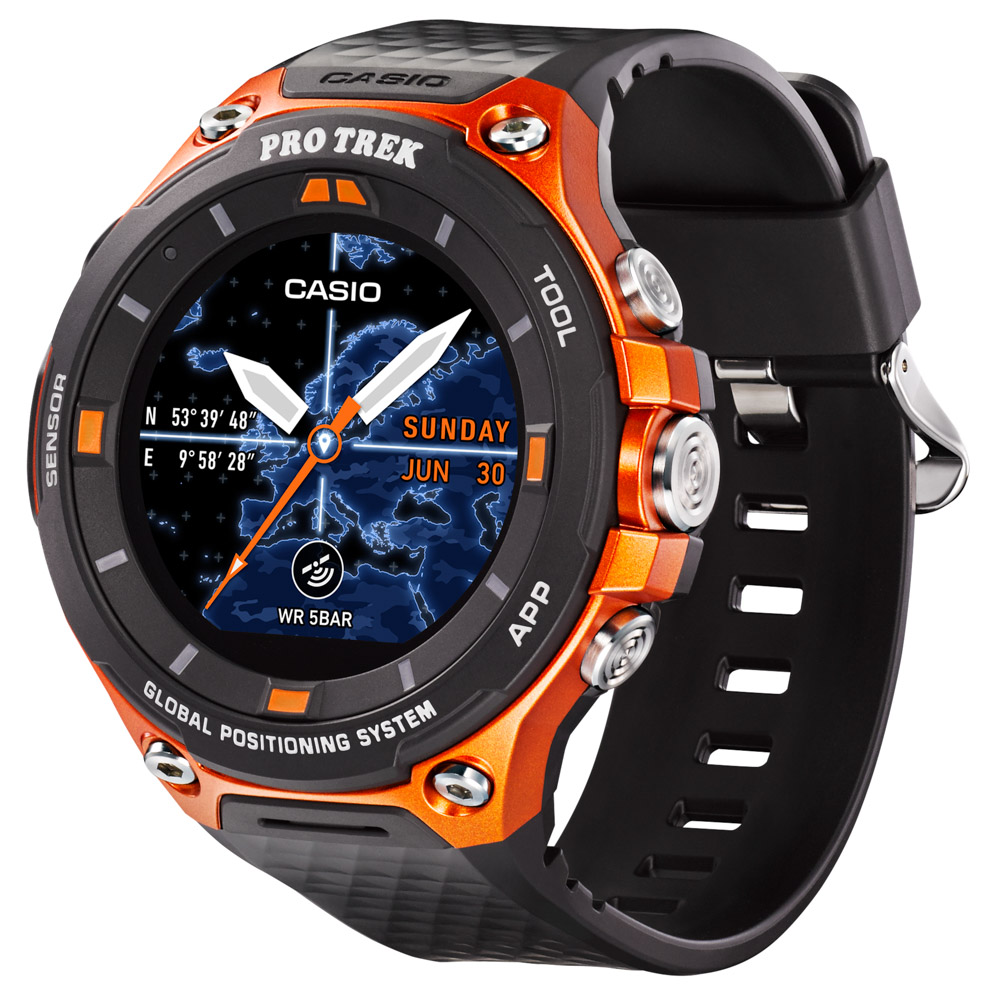 This is very useful for hikers or other outdoors explorers who like to travel outside of established mobile data networks. A key question that many people ask when thinking about a smart watch is “what does it do that my phone cant?” Well, being able to have a detailed map and GPS without being connected to a network is one piece of functionality that Casio believes many people’s phones cannot do – though some phones do offer the same feature. 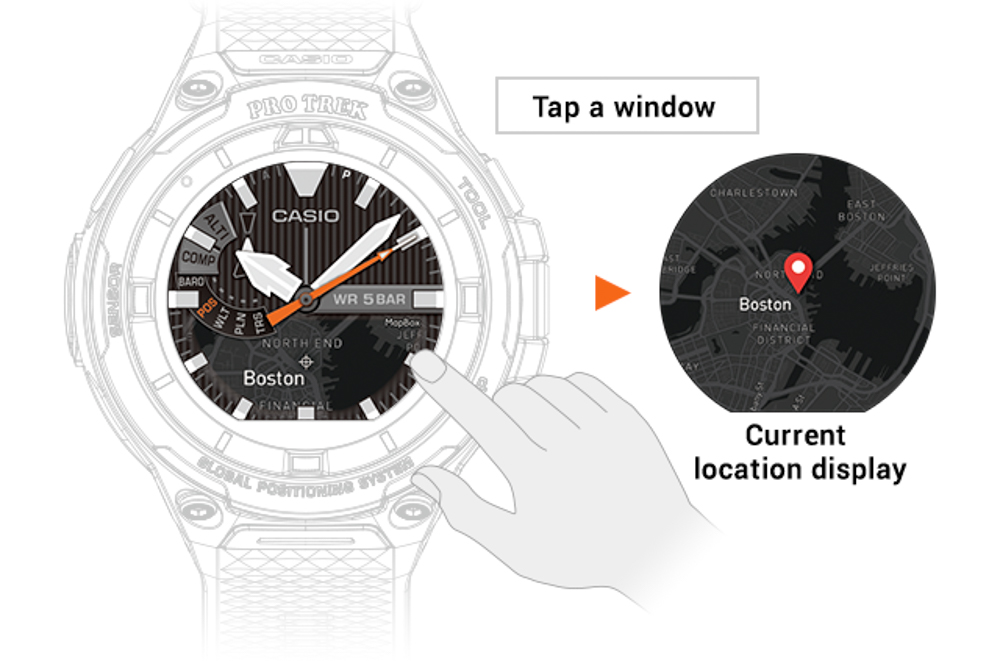 Other navigation and maps functions include being able to manually create way points and other beacons that will be stored in maps. This could be anything from a way points to help you find a path or marking a campsite. The Casio Pro Trek Smart WSD-F20 also apparently features a range of map view options, as well as various watch dials that overlay maps data. Clearly, the navigational functionality in the wilderness is a key selling point of the Casio Pro Trek Smart WSD-F20.

Related to this is the new inclusion of the “Pro Trek” name. For many years, Casio has produced the majority of its outdoors-themed watches under the Pro Trek sub-brand name. Over the last few years the more popular G-Shock family of timepieces overshadowed this important activity watch collection, and it is interesting to see how the inclusion of a smartwatch will revitalize the Pro Trek name. Note that Casio did not choose to connect the WSD-F10 watch to the Pro Trek family, but now the Casio Pro Trek Smart WSD-F20 watch contains the “Pro Trek Smart” moniker. From a marketing perspective, this is probably a good idea. 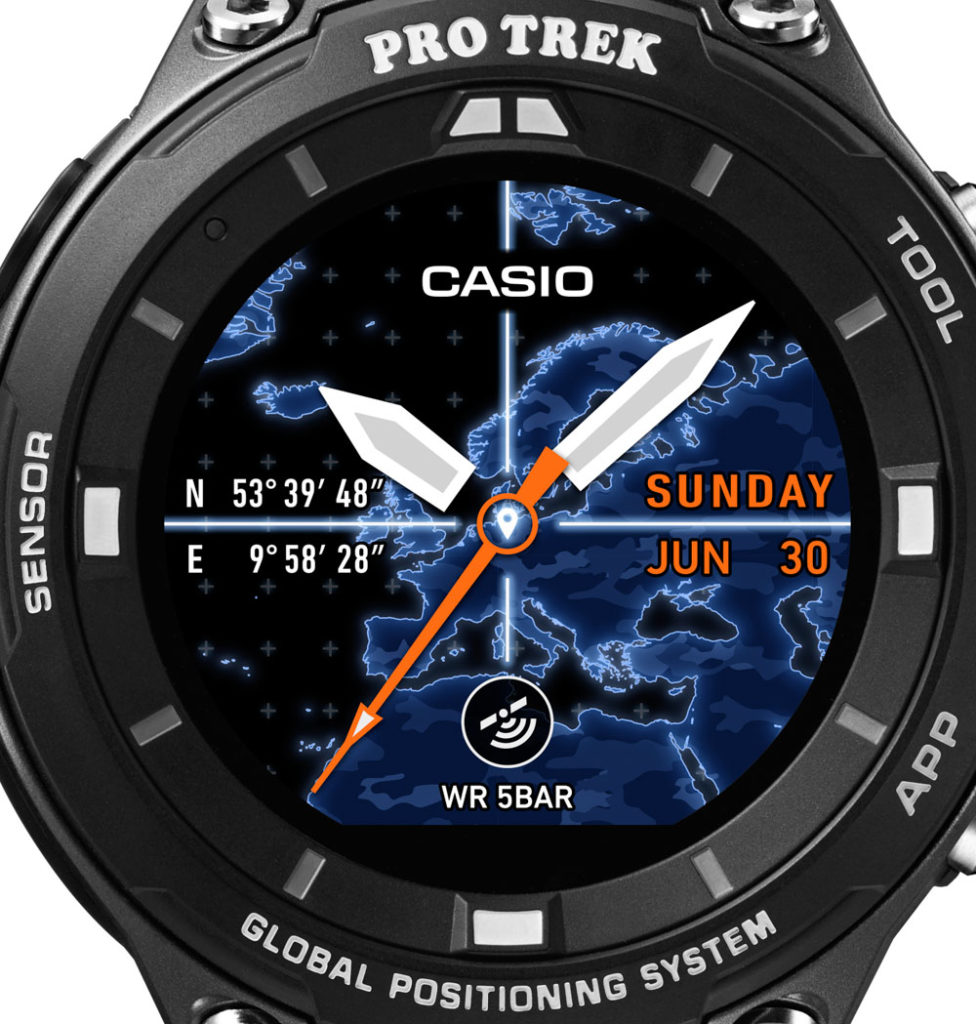 In the promotional video above, you can also see Casio showing off some of the features of the Casio Moment Link app. This is not to be confused with “Moment Setter,” which is a related piece of functionality that allows the Casio Pro Trek Smart WSD-F20 to alert the user about important moments during their journey such as when to rest, drink water, or other conditions. While it is clear that the user is able to manually create these moments, it isn’t clear how much of of the Moment Setter notifications are automated “smart” alerts.

Moment Link is a companion app that allows you to connect to other people in your group who also have a Casio Pro Trek Smart WSD-F20. Functionality here includes the ability to see the location of other people, as well as to send them messages and alerts. However, Casio Moment Link does seem to require both GPS connectivity and mobile data. 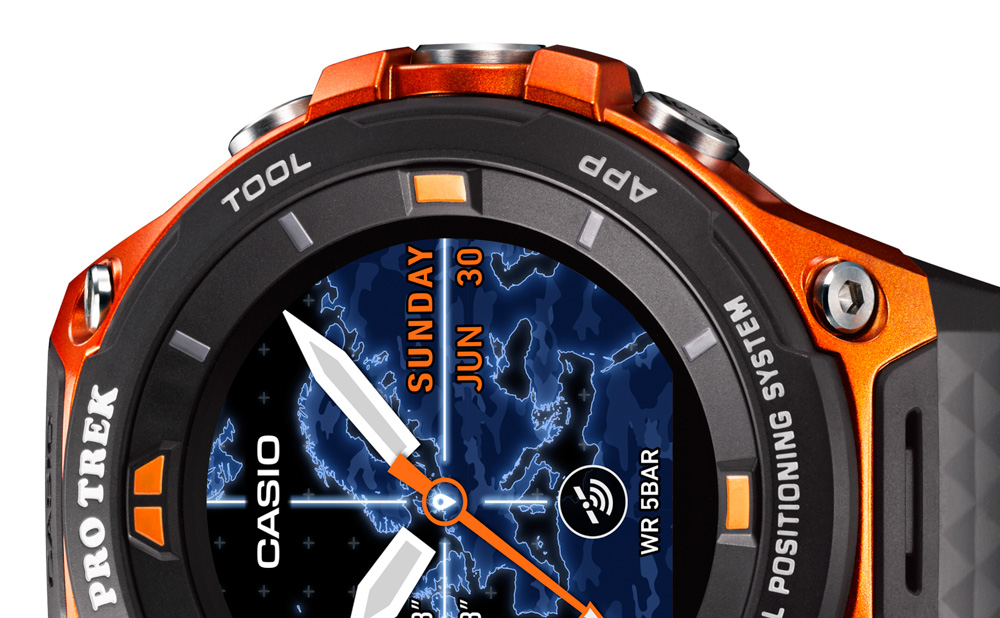 Casio has clearly updated the look of the Casio Pro Trek Smart WSD-F20 compared to the WSD-F10. This includes a more aggressive-looking design with a black bezel and new pusher protectors. The design looks a bit more like other watches in the Pro Trek family, which is probably a good thing. Color options for the time being seem to be black and metallic orange – which were the same colors available for the original model. Overall, I would say that the Casio Pro Trek Smart WSD-F20 has an upgraded design and is going to be more handsome than the original WSD-F10.

Durability seems to be more or less unchanged with 50 meters of water resistant and military spec MIL-STD-810 durability standards. Size also remains pretty big at 56.4mm wide, by 61.7mm long, and 15.7mm thick. Though the watch is very light at just 92g. Casio promises “more than one day” of battery life, which can be up to a month if the watch is only in timekeeping mode (no connections). In addition to GPS, the Casio Pro Trek Smart WSD-F20 also, of course, has both WiFi and Bluetooth connectivity. 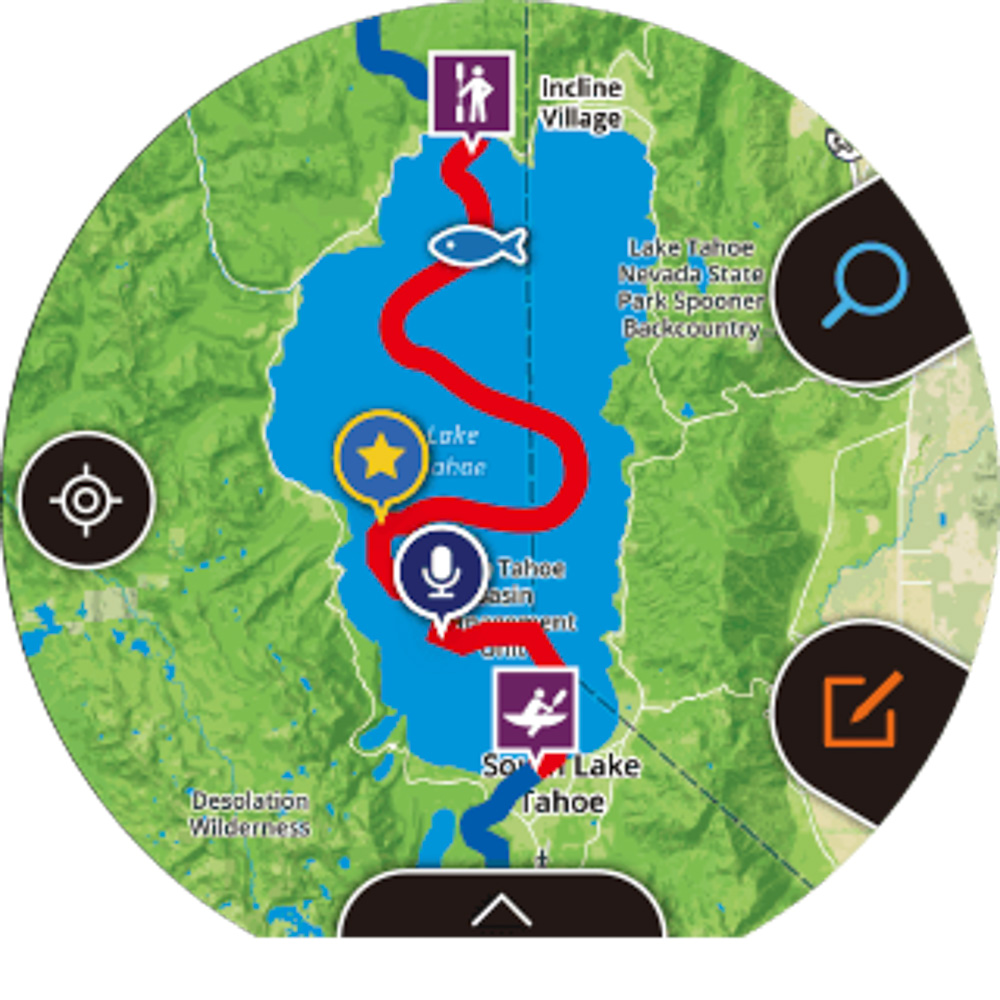 The Casio Pro Trek Smart WSD-F20 is also among the first smartwatches to feature Google Android 2.0 as its operating system. Google has been lagging a bit on releasing its updated wearable operating system. After a full review, I’ll be able to comment more on the functionality of the watch with Android Wear as well as Casio’s own proprietary software which worked rather well on the WSD-F10. The screen on the Casio Pro Trek Smart WSD-F20 is 1.32 inches in size, and is a dual layer TFT LCD. Dual layer implies that there is a monochromatic screen over the full-color screen which is used for a handy always-on display which means you can see the time even when the main screen is off. It works nicely, even if the screen on the Samsung Gear S3 is more advanced when it comes to having an always-on display. 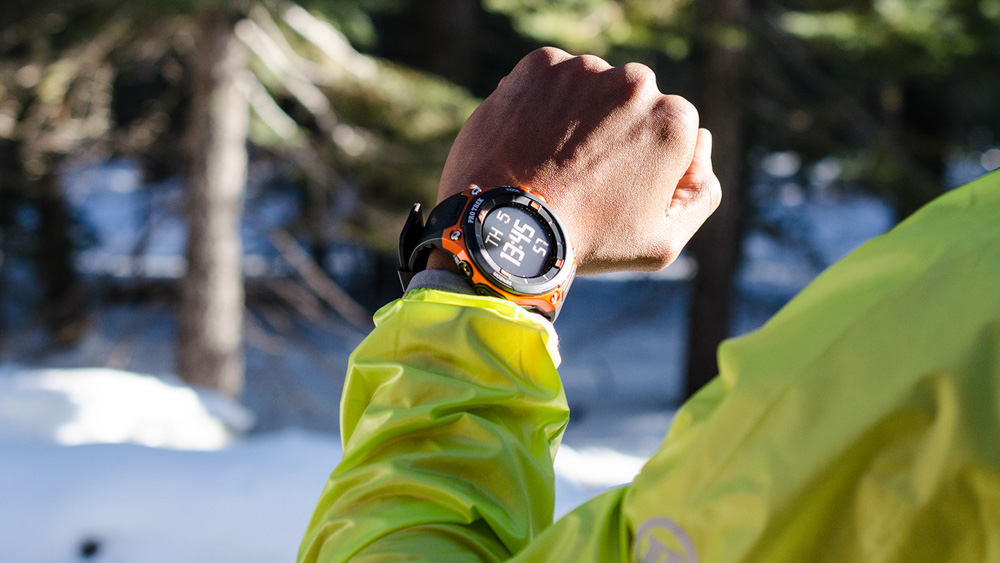 Don’t forget that this is a Pro-Trek watch and that means Casio continues to include built-in sensors for the altimeter, barometer, and compass. The watch also has the standard gyrometer and accelerometer that most smartwatches have these days.

With upgraded looks and functionality, this is the best smartwatch Casio has made so far. More importantly, we see Casio becoming more comfortable about including smartwatches in their greater family of popular watches, and also offering solid value propositions to consumers of why and when to use such a device – something many other smartwatch makers have struggled with. If you are a regular outdoors trekker who likes having the latest tech as your travel companion, then the Casio Pro Trek Smart WSD-F20 will likely be on your short list of smartwatches to consider. Price for the reference WSD-F20-RG (orange) and WSD-F20-BK (black) will be around $500 and availability is set to begin on April 21, 2017. wsd.casio.com