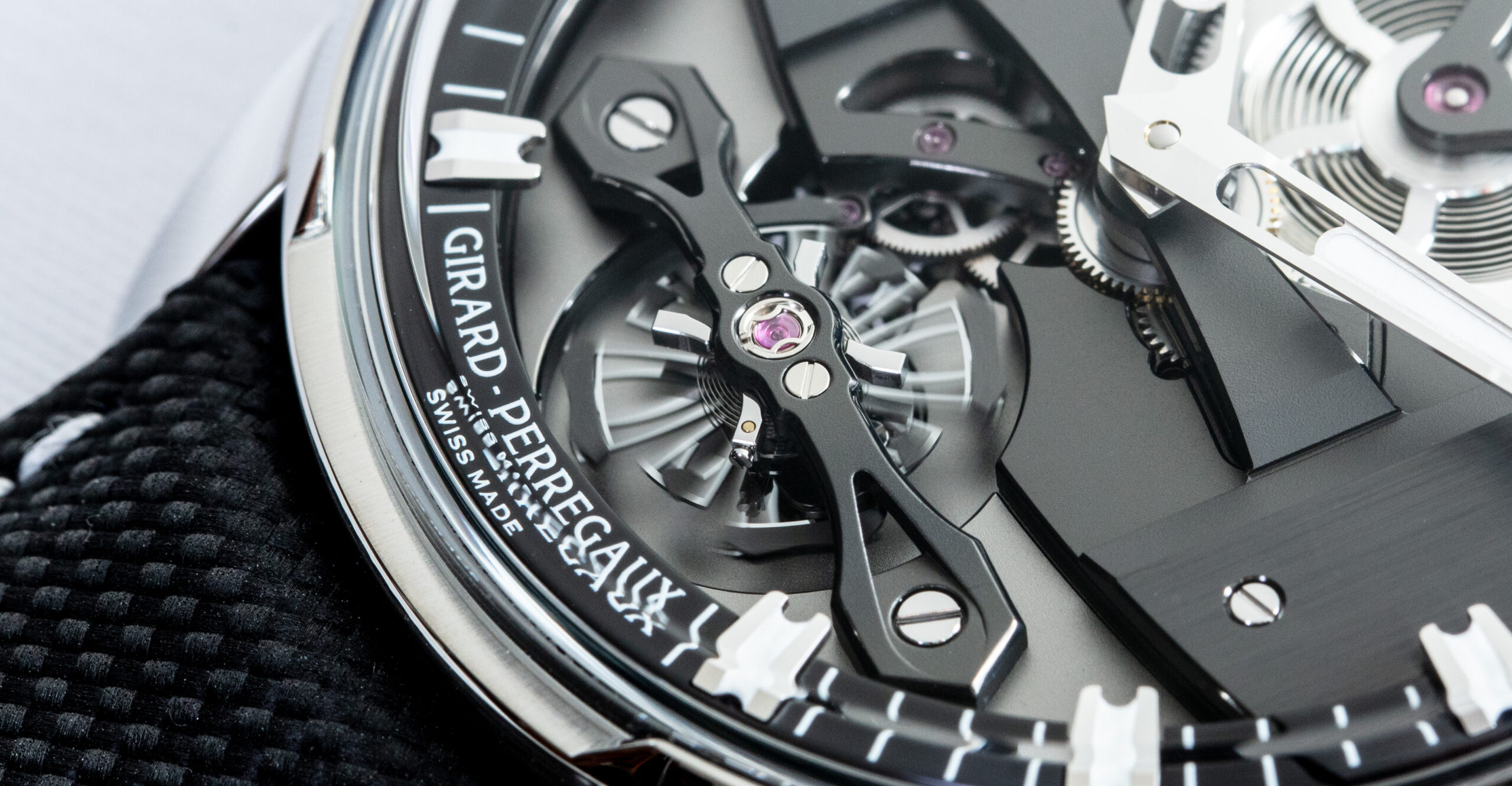 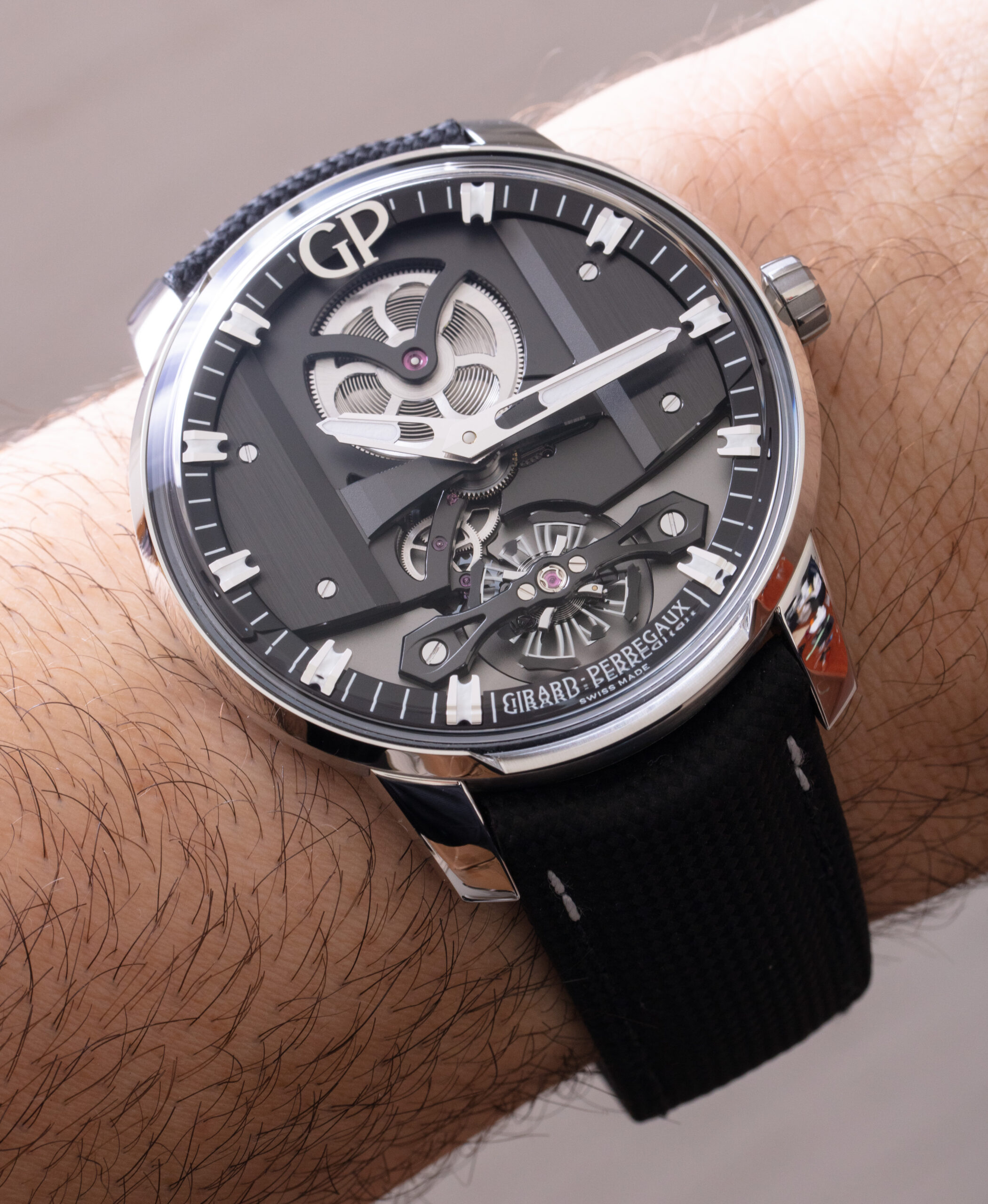 Just a few years ago, a product like the Girard-Perregaux Free Bridge would probably not have been made because products like this are part of a relatively new luxury timepiece category that is still being defined. At under $20,000, the Free Bridge is by no means an inexpensive product, but it is meant to capture a lot of the same emotion as watches costing $100,000 or $200,000, and up. Many of these watches have elaborate designs with exotic movements and a large emphasis on dial visuals and animation. Where they save costs is by having less complicated movements that are produced using more industrial means. One way to think of these watches is as “entry-level super-watches,” in the same way that there might be an entry-level supercar. More so, the Free Bridge watch is currently the most accessible model within the larger “Bridges” product family by Girard-Perregaux.

The Free Bridge watch is a sporty-looking dress watch that is meant for social and formal wear. It has bold, contemporary lines but at heart is a traditionalist’s watch meant for those who appreciate the art of horology. The dial may only indicate the time, but the richly detailed three-dimensional case has a lot of personality while also being more youthful than watches that would have been designed to fit this segment just a few years ago. Girard-Perregaux is, further, quite open about the fact that models like the Free Bridge are specifically intended for just such consumers — younger, aspirational types who want relevant designs from classic names in the luxury watch space. I’m not sure if there is one correct way to do this, but Girard-Perregaux’s response to this marketing prompt is actually highly competent. 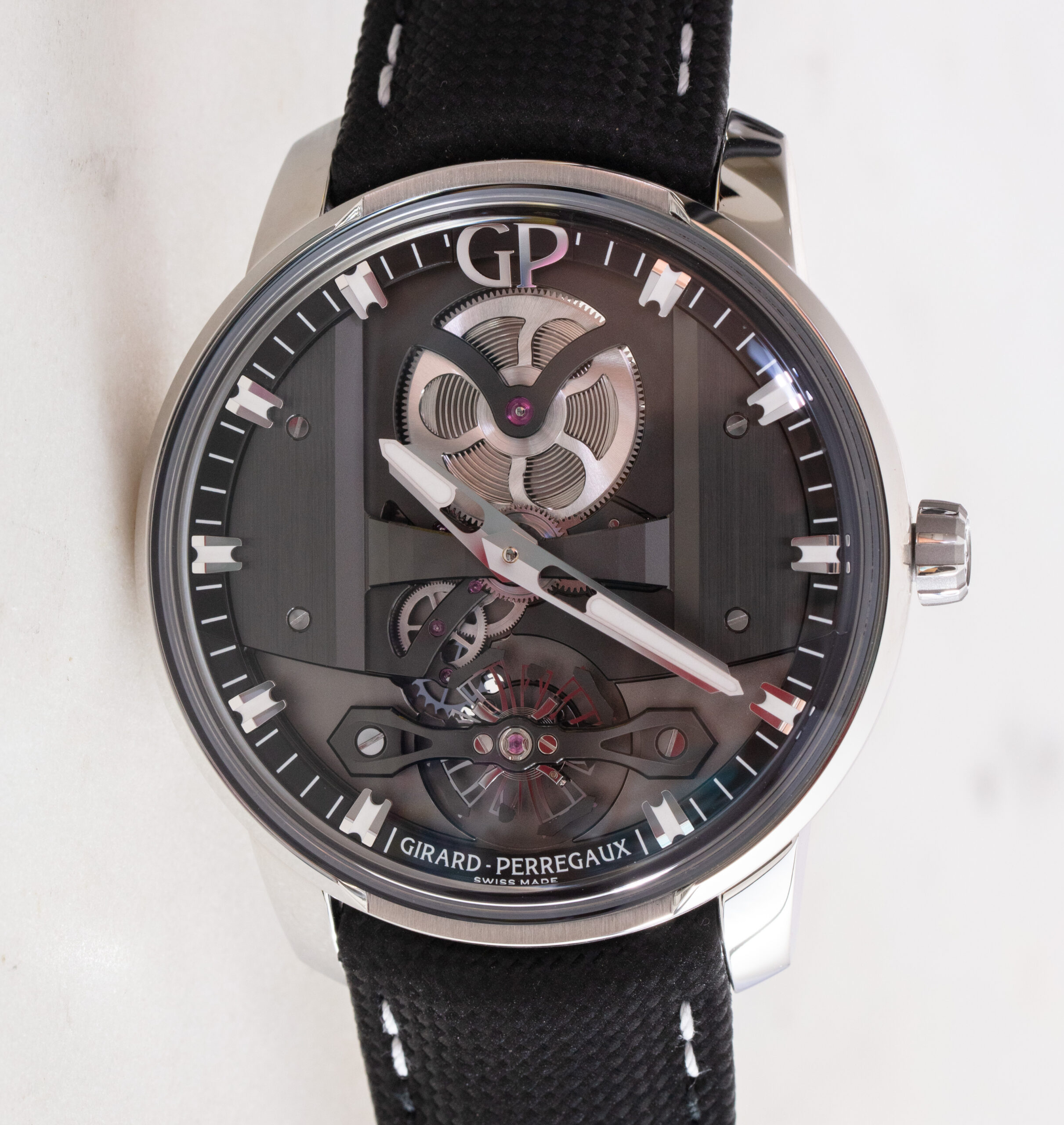 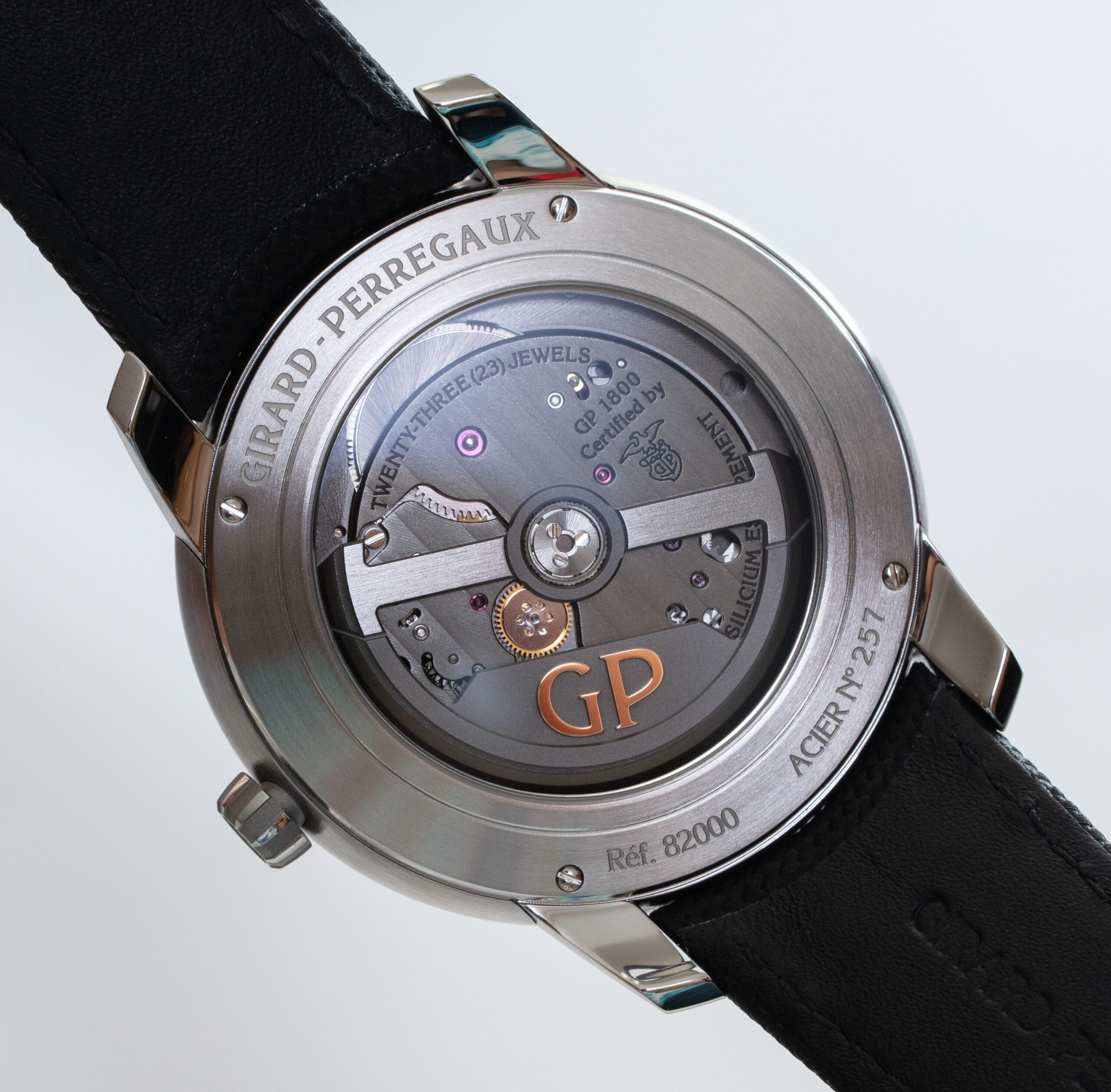 The “Bridges” collection theme, in general, is based on a movement design aesthetic that has become synonymous with the brand. Back in the mid-19th century, Girard-Perregaux produced a new pocket watch movement with three distinctive arrow-ended bridges on the movement. Since then, the “three bridges” concept has shown up in the architecture of many high-end Girard-Perregaux movements. More recently, the company decided to “unpack” the three bridges concept and make some watches with just one or two bridges. The Free Bridge has one distinctive bridge (over the oscillator positioned at 6 o’clock on the dial), but it is enough for an enthusiast to identify the watch as being a Girard-Perregaux.

The movement, made in-house, is based on the long-standing Girard-Perregaux calibre GP01800, known as the calibre GP01800-1170. The automatic movement operates at 4Hz and has a special mostly silicon balance, as well as escapement. The movement has a power reserve of 54 hours and is produced from 185 parts. The architecture of the movement is interesting because of how it is designed for presentation from the start. For example, both the mainspring barrel (skeletonized and located under 12 o’clock) and the regulation system were designed to be on the front of the watch, versus on the rear where most mechanical movements would have such systems placed. The movement in this particular configuration only tells the time with minutes and hours (no seconds). 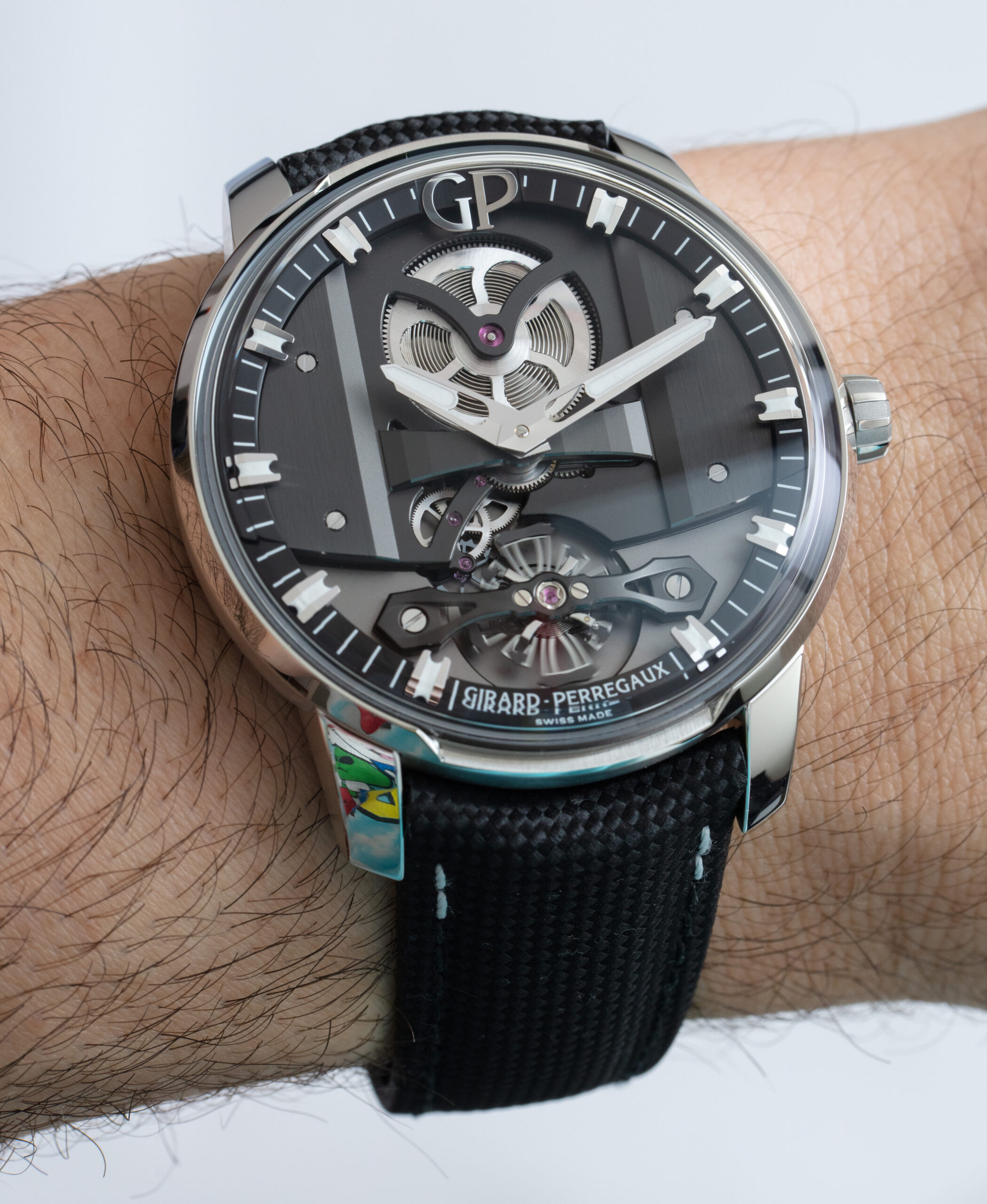 The value of the movement is really its architecture, as well as its deep, symmetrical design. This watch is a statement about the appeal of mechanical movements and how, to fully appreciate them, you should show off as much of the mechanics as possible. For sure, this a matter of taste and style alone, but it is an aesthetic that is certainly more modern and contemporary, as opposed to classic and traditional. The former approach is, indeed, wiser when trying to create a more relevant product that speaks to the visual experiences of people growing up in our instant times.

This Free Bridge reference 82000-11-631-FA6A watch comes in a highly polished and brushed steel case (which is of excellent quality, I should add) that is 44mm-wide and about 12mm-thick (due to the generously AR-coated, domed sapphire crystal. The case is, however, only water-resistant to 30 meters, but it does have a lovely refined design and an exhibition caseback. 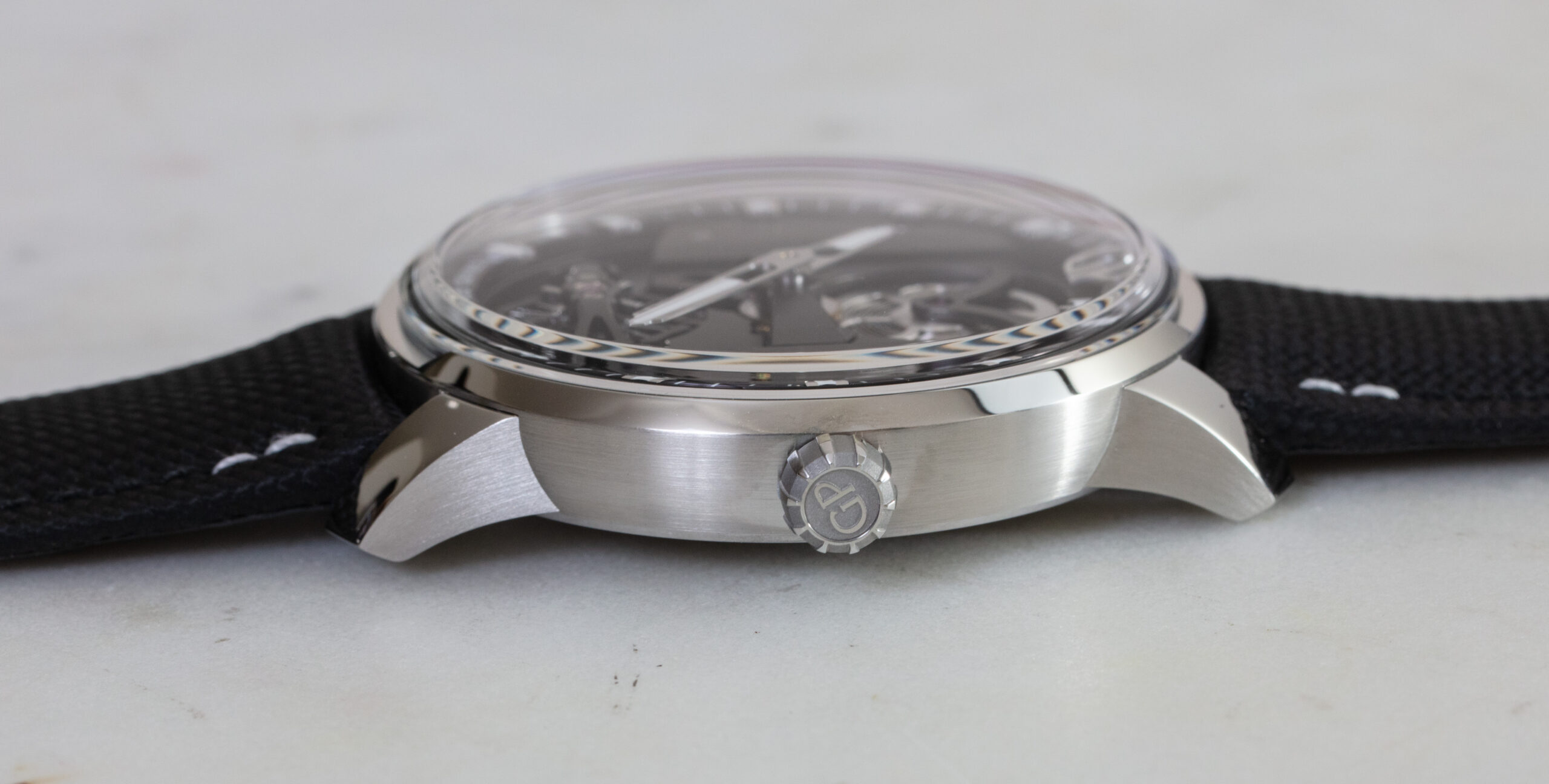 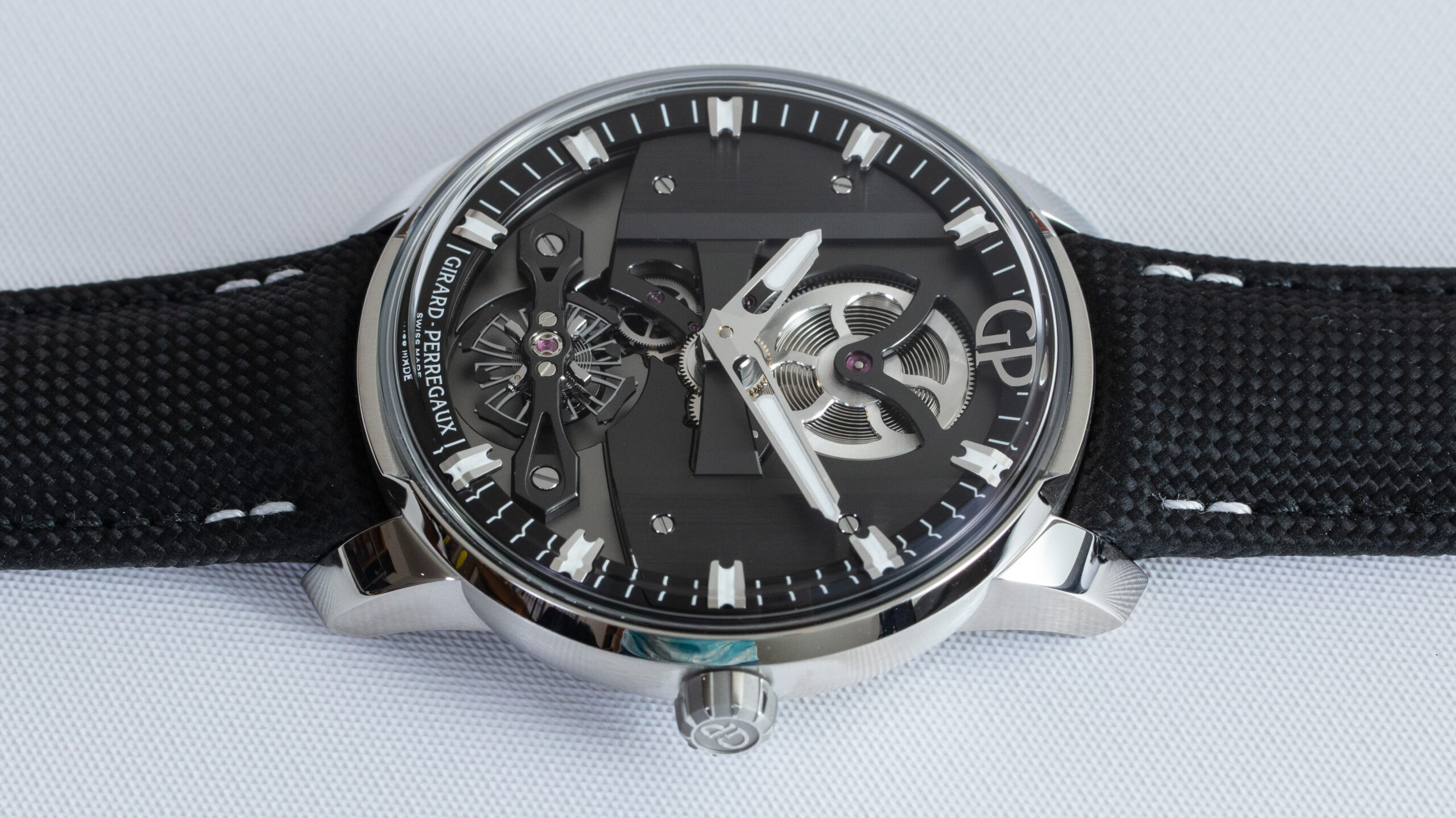 Going back to the watch dial, I really appreciate the strong level of legibility, depth, movement animation (thanks to the balance wheel) and ability to attract the eye with bits of polish and shine. The dial is not beyond critique. Some might call out the hands, which are a bit short (though this is due to the size and height of the hour markers), and others might simply not like the modern, skeletonized theme of the Free Bridge face. That said, no one can accuse Girard-Perregaux of being lazy, out-of-touch with the market, or graphically unoriginal.

Attached to the Girard-Perregaux Free Bridge watch is a fitted strap matched with a butterfly-style folding deployant in matching polished steel. This is among the few such deployants that I actually like wearing, as I find most to be uncomfortable on the wrist. The strap is calf-leather on the inside and what feels like fabric on the outside. Note the small color detail on the strap, which has the first two stitches in white thread (to match the dial colors a bit), while the rest of the strap threading is in black. 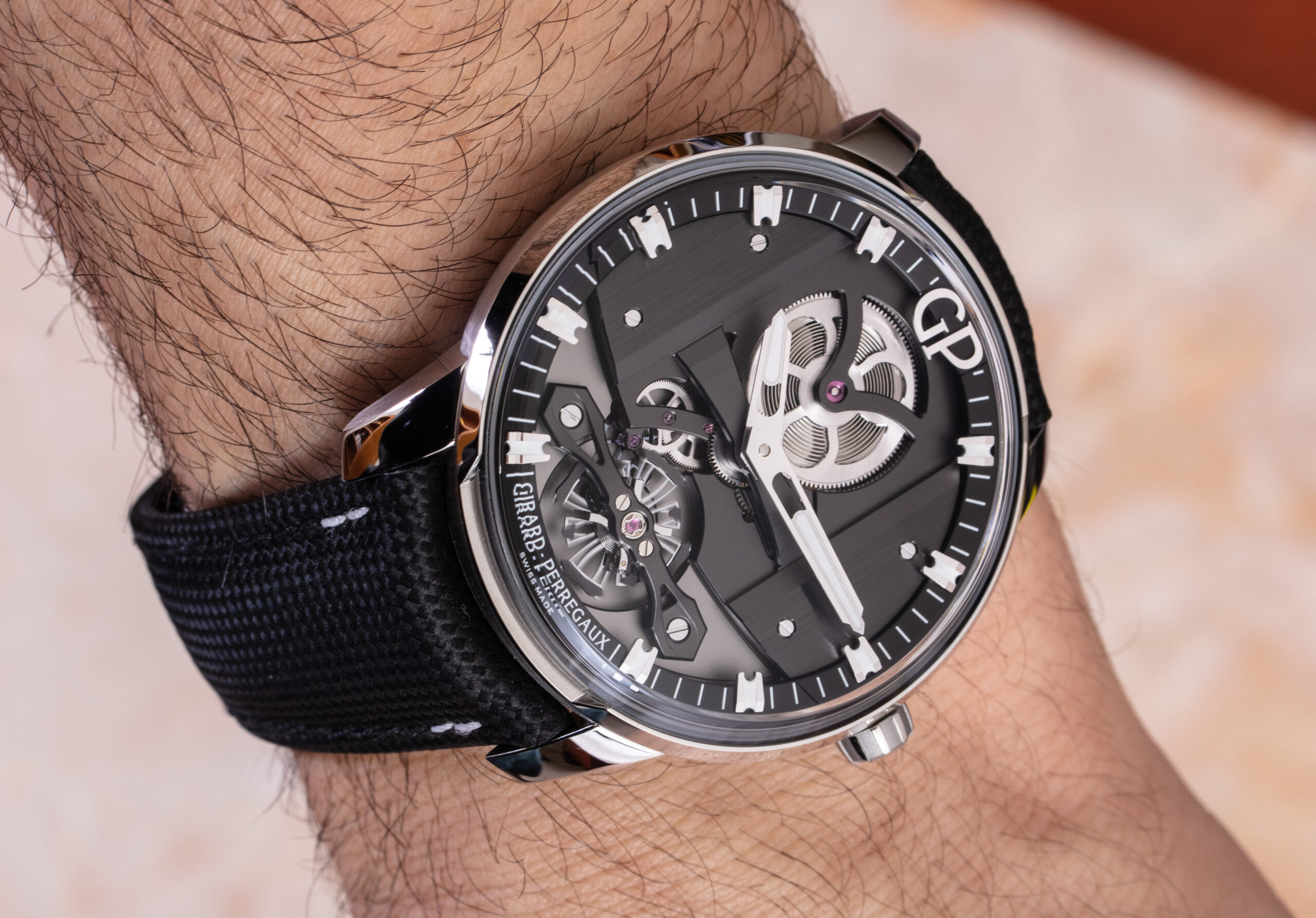 What the Girard-Perregaux Free Bridge watch does well is to offer a taste of the exotic watch experience in a package that can be easily worn daily and that, while not cheap, is by no means in the traditional price range of exotic watches. For example, other watches in the Girard-Perregaux Bridges collection are often priced in the hundreds of thousands of dollars. The Free Bridge is a practical way in to the world of highly expressive watches with interesting mechanical parts. It happens to come from a company that has a lot of experience actually making watch movements, and it has a design that doesn’t immediately feel as though it were originally intended for someone who lived yesterday. Probably the most interesting element of the watch that serious enthusiasts will enjoy is the design of the novel silicon balance wheel (which, unfortunately, doesn’t hack/stop when you pull out the crown), as it helps solidify the Free Bridge as both a modern-looking, and modern-engineered luxury timepiece. Price for the Girard-Perregaux Free Bridge reference 82000-11-631-FA6A is $18,300 USD. Learn more at the Girard-Perregaux website here.

Necessary Data
>Brand: Girard-Perregaux
>Model: Free Bridge reference 82000-11-631-FA6A
>Price: $18,300 USD
>Size: 44mm-wide, ~12mm-thick, and ~50mm lug-to-lug distance.
>When reviewer would personally wear it: As an horologically compelling mechanical watch for evening social events.
>Friend we’d recommend it to first: Someone who wears business attire with some regularity and who would rather have fun in a roughly $20,000 watch as opposed to wishing to show off with a roughly $20,000 watch.
>Best characteristic of watch: High-quality materials and construction. Fun look at and easy-to-read dial. Comfortable to wear on the wrist. Genre-bending overall concept is intellectually satisfying.
>Worst characteristic of watch: Design is interesting but lacks a direct theme. Arguably still a bit expensive for some of the target demographic. Lack of hacking or seconds indication in movement.