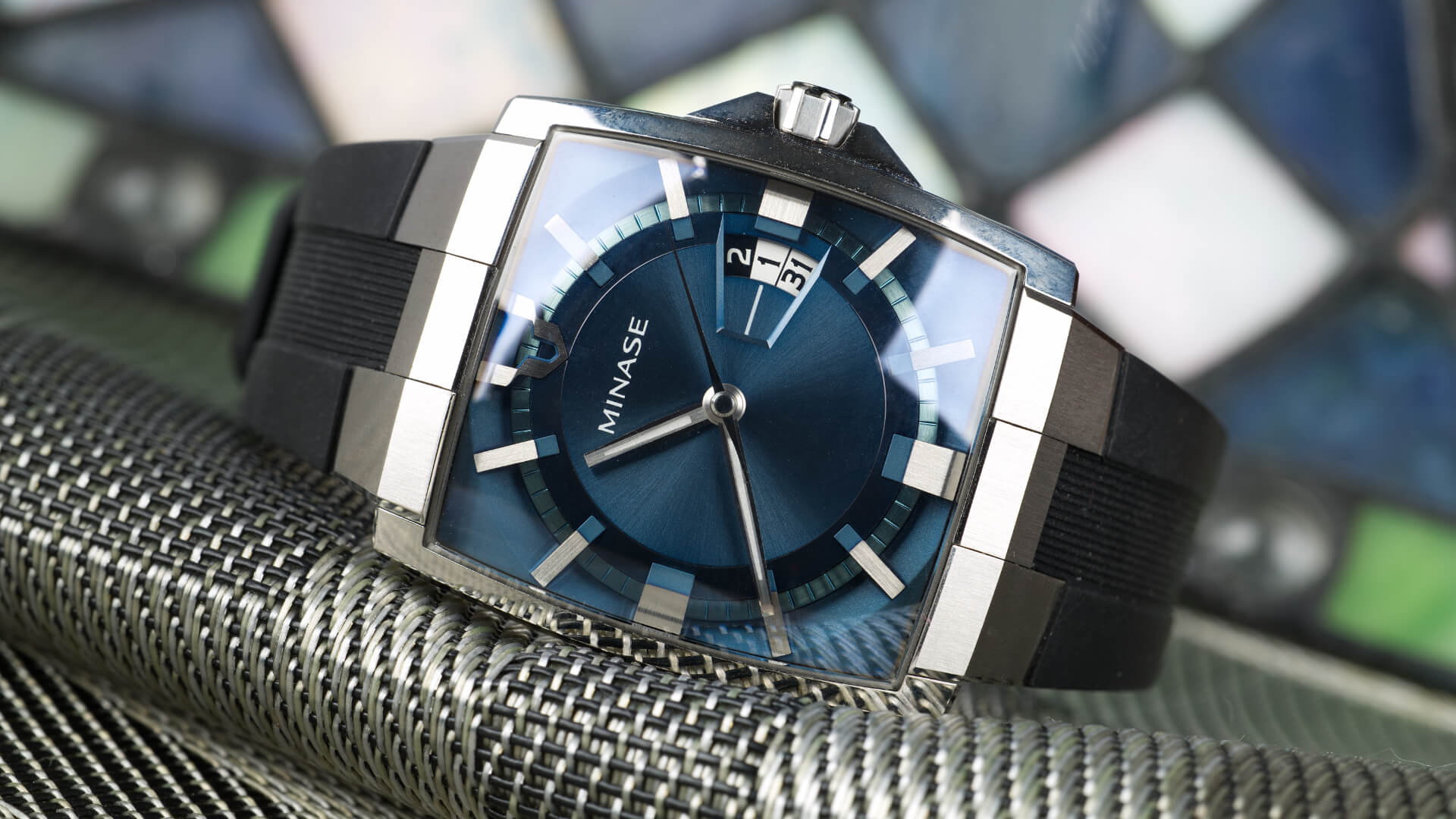 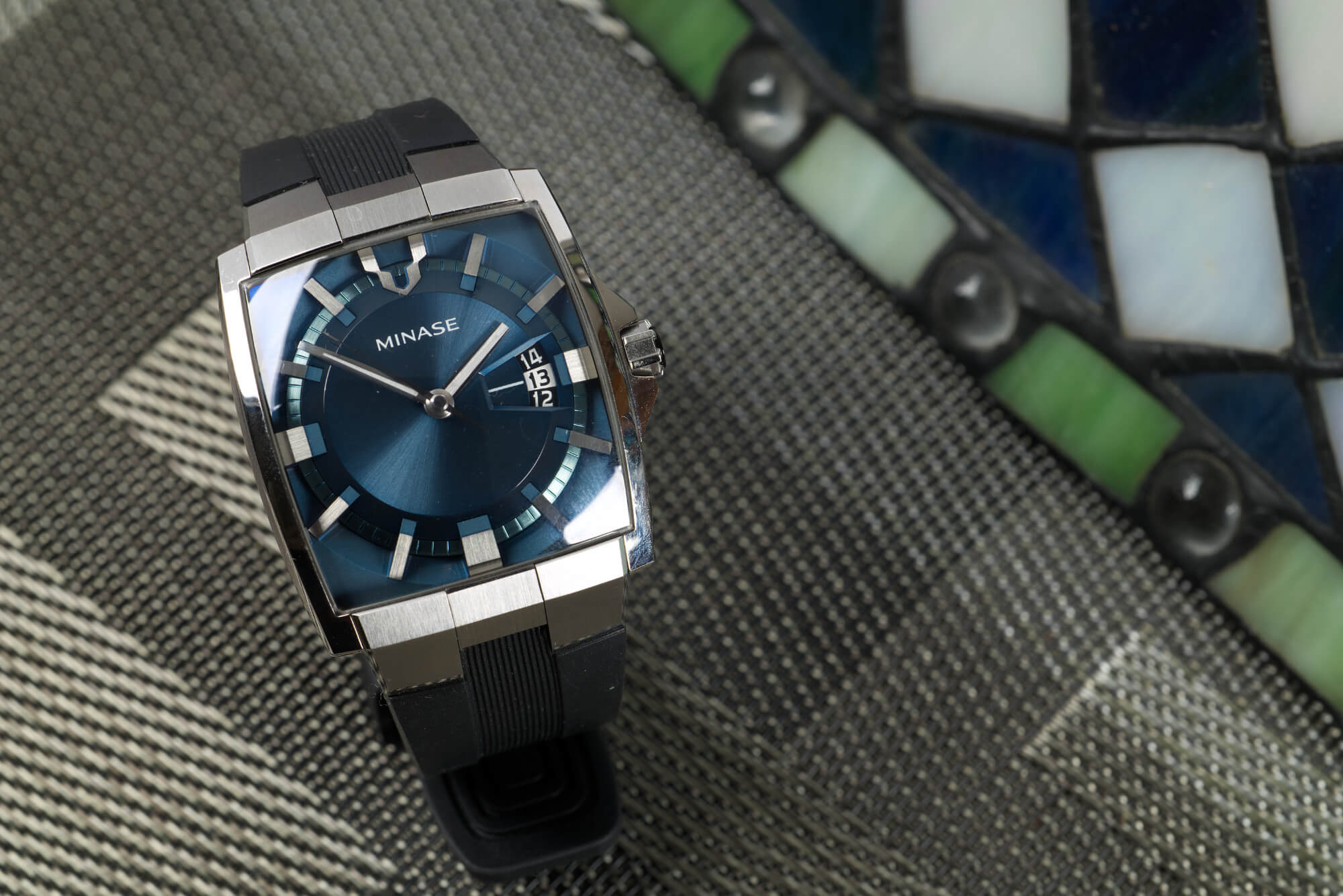 If you find yourself in Japan and take the Shinkansen bullet train north from Tokyo for about four hours and hop off at Akita Station, you’ll still be an hour’s drive from the small factory in Yuzawa where Minase makes its watches. If you venture there in winter, more likely than not the buildings will be blanketed in snow, and you’ll have to hope the roads have been cleared. The lengths to which one must go to get to Minase gives a sense of removal from modern life, even though the buildings and town are by no means rustic. With that feeling, one might expect traditional watches—round, plain dial, but beautiful—to come from the small brand. The reality is quite different: from a factory that is truly unremarkable in its appearance, a catalog of angular, dramatic watches with dimensional dials that sometimes appear to be floating within their cases. When you learn that Minase originally made cases and components for other brands, and that its parent company, Kyowa, makes precision cutting tools, the brand aesthetic begins to make sense. 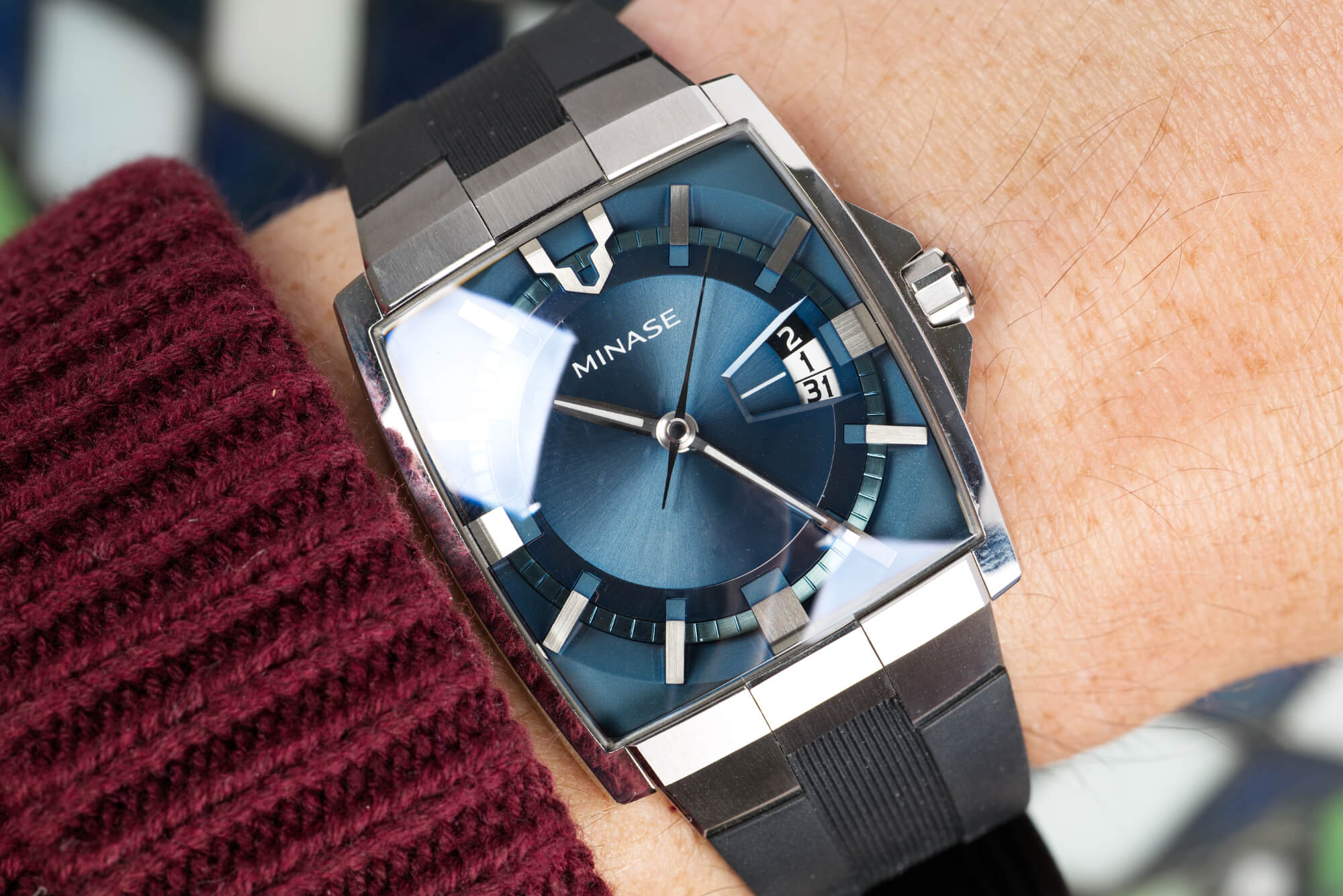 Until around six years ago, though, Minase was nearly unheard of outside Japan. It was around that time, in Switzerland, that industry veteran Sven Henriksen had a chance encounter with Tsuyoshi Suzuki, CEO of Kyowa, who happened to be in town for meetings with a few large watch brands. Over dinner, Suzuki told Henriksen about Minase, his small watch company producing just 300 watches a year, only available in Japan. But it was Suzuki’s dream to have his watches available in a Swiss retail location. Henriksen knew he could make it happen, and seeing the unique watches that Minase produced, he knew he wanted to be part of bringing the brand to a wider audience. 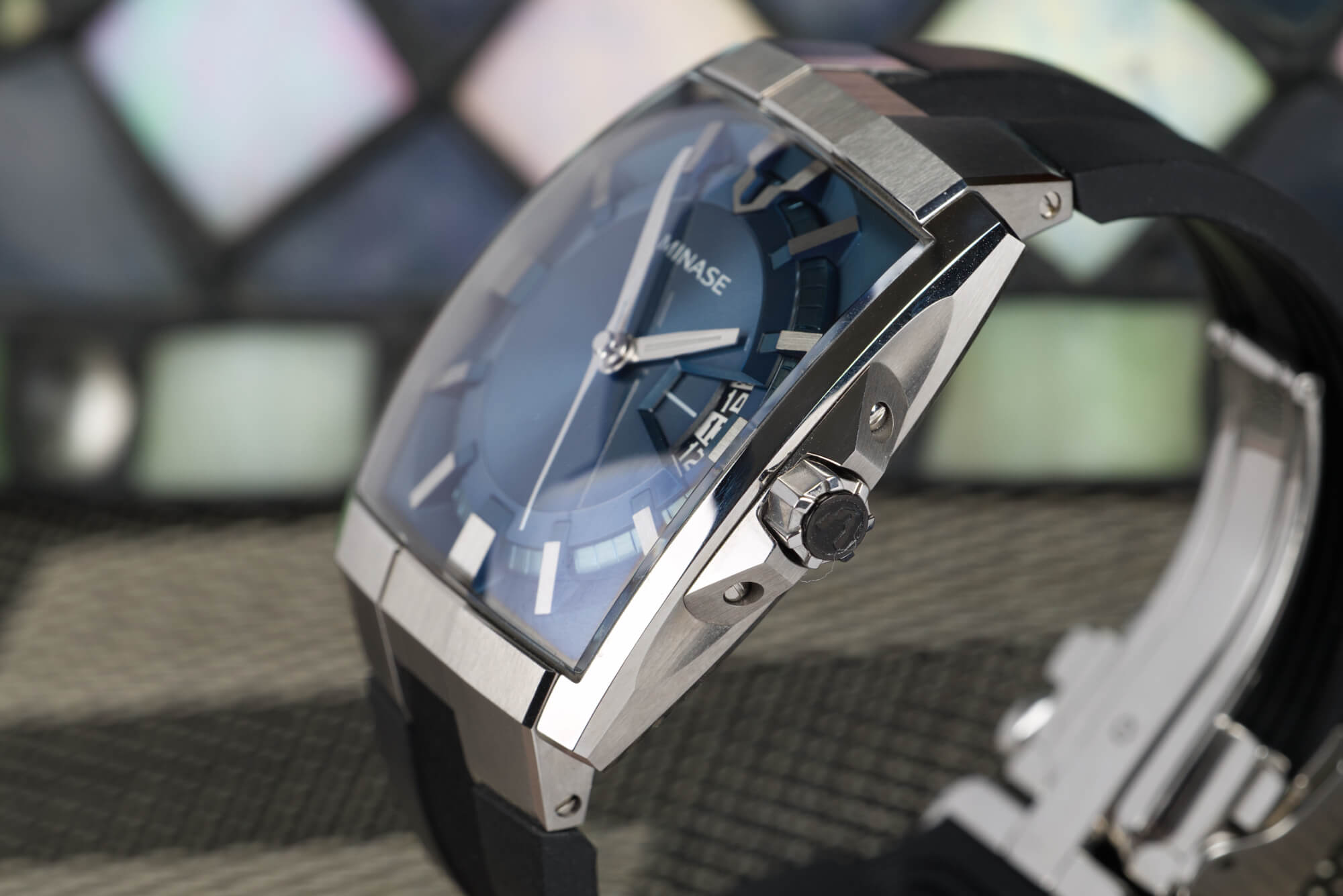 As mentioned, Minase watches stand out for their cases and their dials. I had the chance to choose from the full catalog for review, and I chose the Horizon 2.0 for two reasons: It’s not the more well-known Divido, and I thought it would show off the brand’s casework better than some of the other models. Like all Minase watches, the Horizon 2.0 features striking angles and faceting, with only a few acknowledgments that curved surfaces even exist in the world. The finishing is remarkable, and that’s no surprise once you learn about the Sallaz finishing that Minase uses. The technique takes its name from the Swiss polishing machines that Minase uses, which can polish surfaces as small as .2 mm2 and when used by the skilled craftspeople at Minase, produce a black polish effect. If that looks or sounds familiar, Seiko’s zaratsu polishing takes its name from the same machines and uses the same techniques. What Minase does differently is to push the capability of its craftspeople and machines further—more facets, more contrast, more dynamic. Even the pull-out crown—which helps to achieve 50m water resistance—features Sallaz polishing. 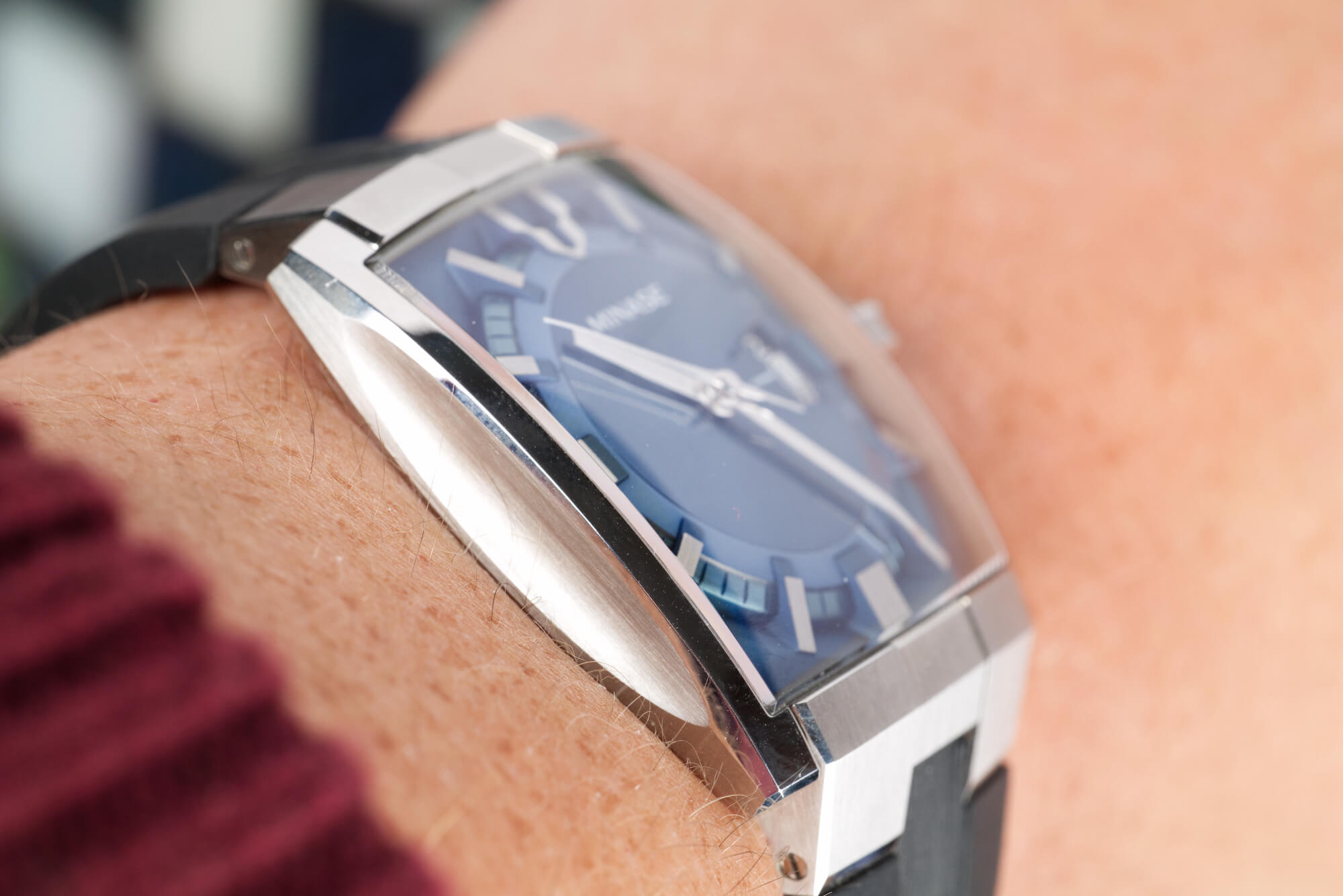 Perhaps the most intriguing feature of the Horizon case is the concavities on its flanks; they belie the case’s angles, offering a softness against the sharper silhouette. On the wrist, the Horizon case is a bit bulky, a 38mm x 51mm box with little to mitigate its length and 12mm of height. The only part that eases the heft a bit is the angled lugs, but they don’t offer much relief. The rubber strap with its deployant closure is somewhat stiff, though it meets the case perfectly via a screw bar that goes through the strap and lugs. I would be very curious to see how this watch looks and wears on the optional bracelet, which would only amplify the contrasting finishes as each component is also made in-house by hand. I imagine it would be more comfortable and more attractive, though the rubber does give the watch an added sportiness. While the size and comfort weren’t ideal on my seven-inch wrist, the finishing makes wearing it enjoyable for sheer visual pleasure. To be sure, this is one of those watches where I repeatedly found myself looking at the watch without making note of the time. And that is just as true on account of the case as the dial. 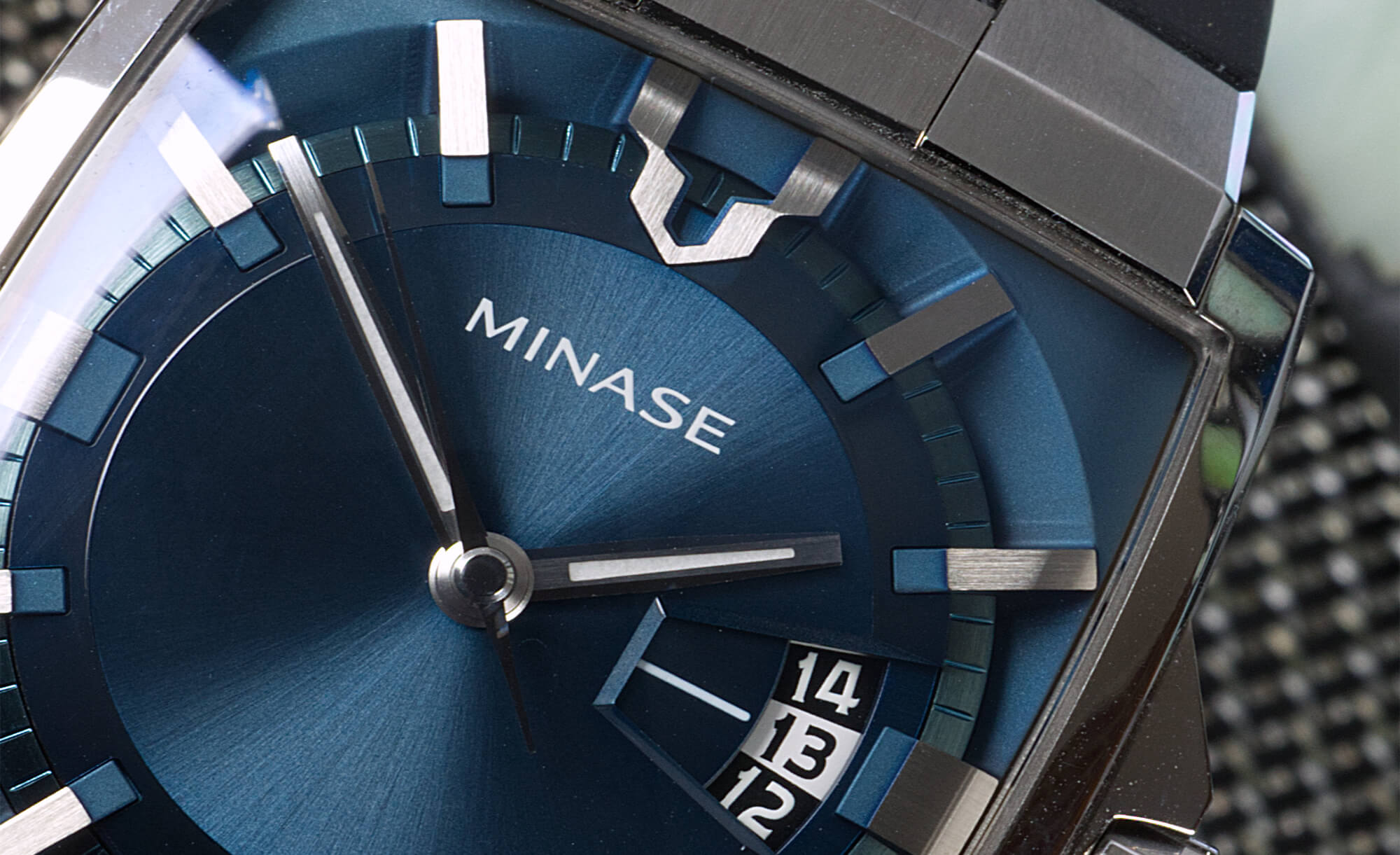 While there’s no indication that the dials or hands are made by Minase, they are no less spectacular than the case. Under the domed rectangular sapphire crystal, the domed dial is a striking shade of blue-green—achieved through PVD coating—shifting depending on the light. While other Minase models give the illusion of the dial floating within the case, the Horizon simply impresses with its depth.  It features striking undulation, with a central sunburst dial that gives way to a valley with minute marks before rising again to the edge of the case. Like bridges across the gulf, applied brushed hour markers stand out, with the 12 o’clock marker in the form of the Minase logo. 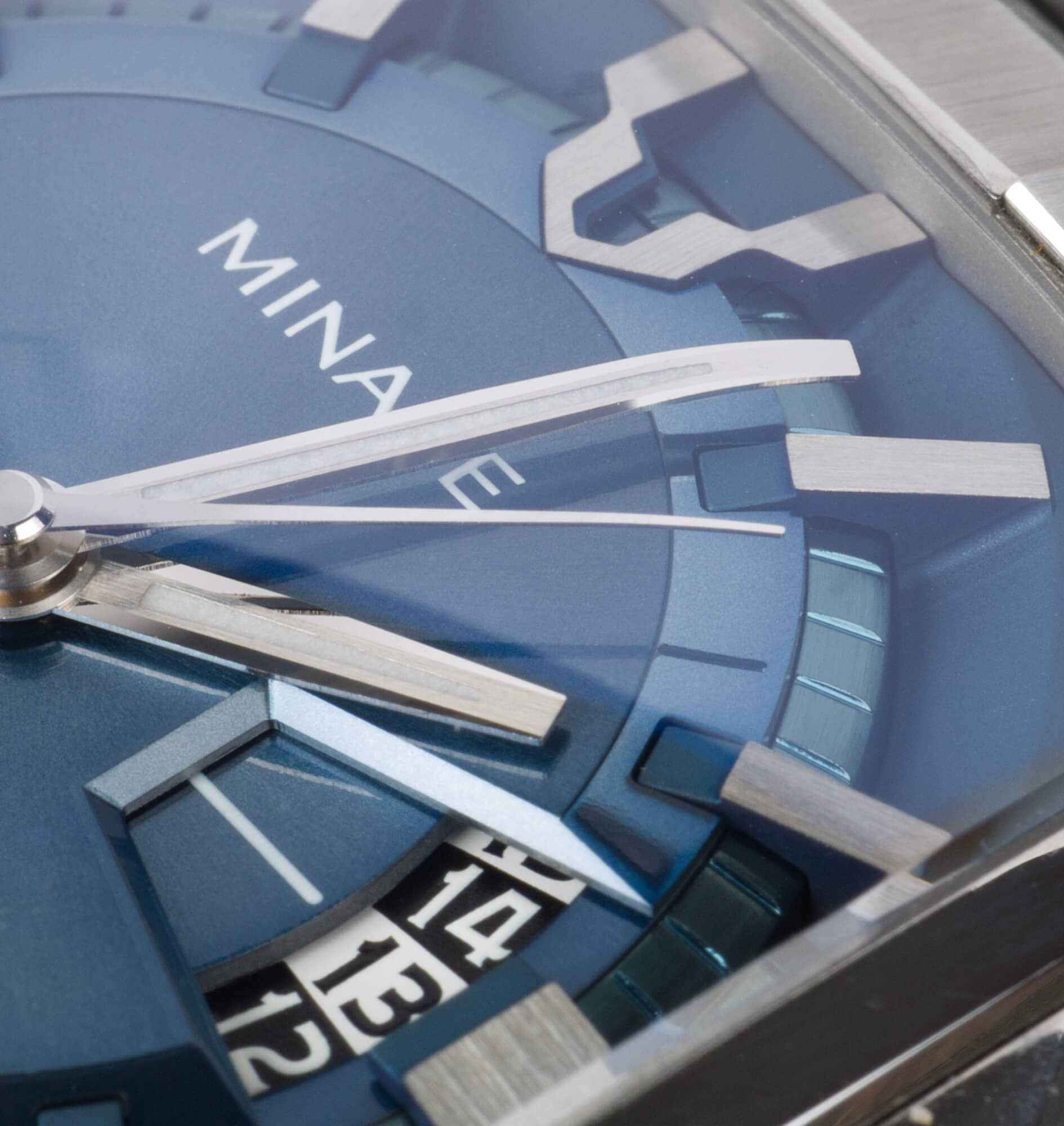 A close look at the dial reveals even more. The main dial features three different finishes: sunburst center , a semi-gloss slope, and circular brushed minute ring. It’s these different finishes that I think create the richness of the dial, allowing for the dial to respond differently in the same light. The hands feature lume (the only part of the watch that does), a brushed top and polished sides, and curve along with the dial. My one gripe is the date window. While I love the style of the trapezoidal aperture and its bevel, the use of what some call an “open” date display—with three dates shown at once—has never made much sense to me. The roulette date wheel helps a bit in distinguishing the numbers, and the line pointing to the current date helps know which date it is, but it makes checking the date at a glance a bit trickier. Aesthetically, it creates intrigue but disrupts the beautiful dial; functionally, it falls short. 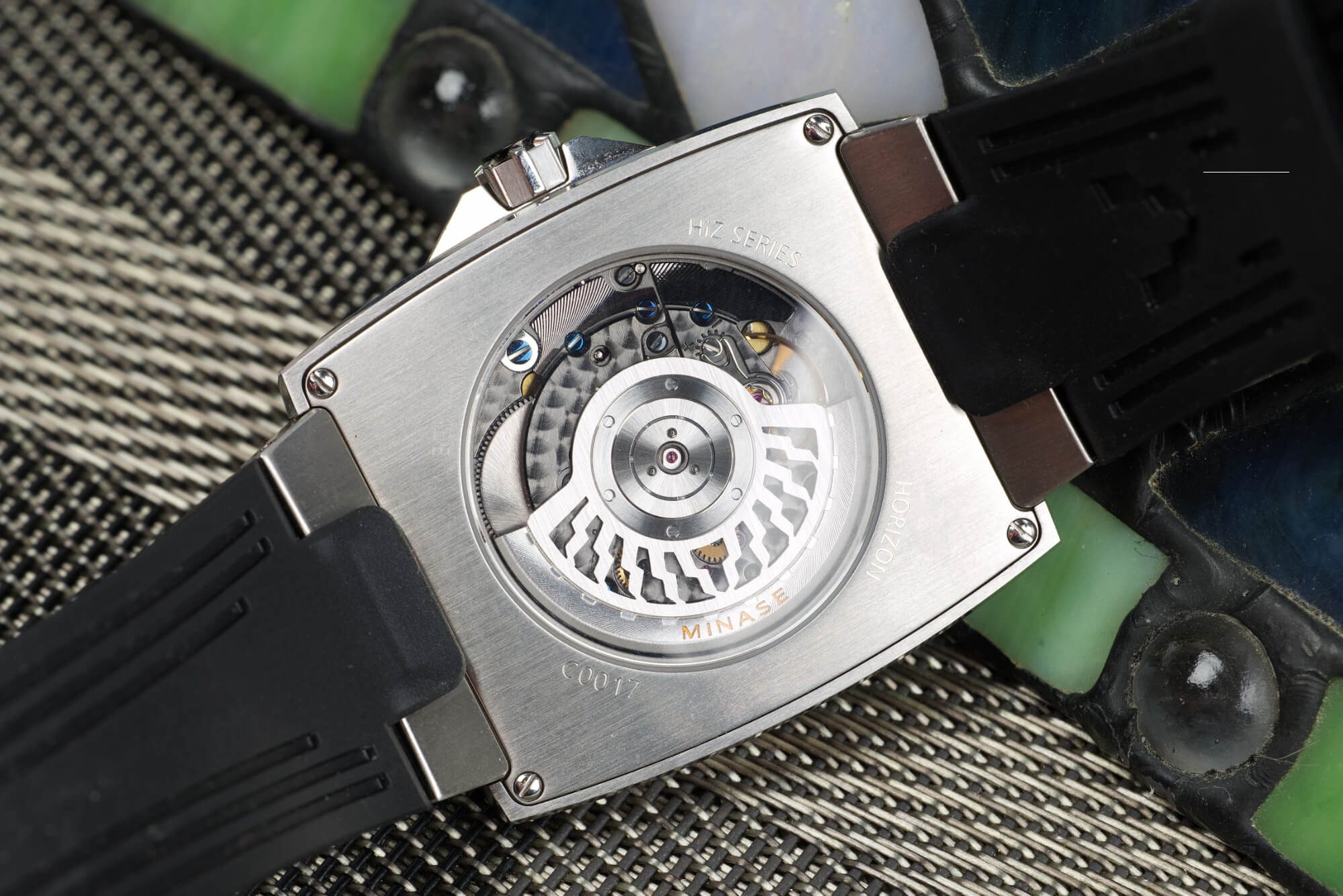 The screwed-down caseback features a sapphire crystal aperture that has the movement on display: the Minase KT7002. The brand is quite clear that it uses ETA 2892 base, to which it adds its own decorations, including a custom rotor. It’s a nice view of a solid movement. Keep in mind that at the end of the day, Minase is owned by a precision tool manufacturer that makes and has expertise in making very well-finished metal things—to wit, the logo is inspired by the bit of a step drill. The brand does not make movements, nor does it purport to be a watchmaker, per se. While some may wish to see a manufacture or even in-house movement at this price point, the Minase story centers around cases and dials, not movements. I’d love to see Minase grow to the point where it can offer a bit more, but for the time being, using a top-notch Swiss movement is fine by me. 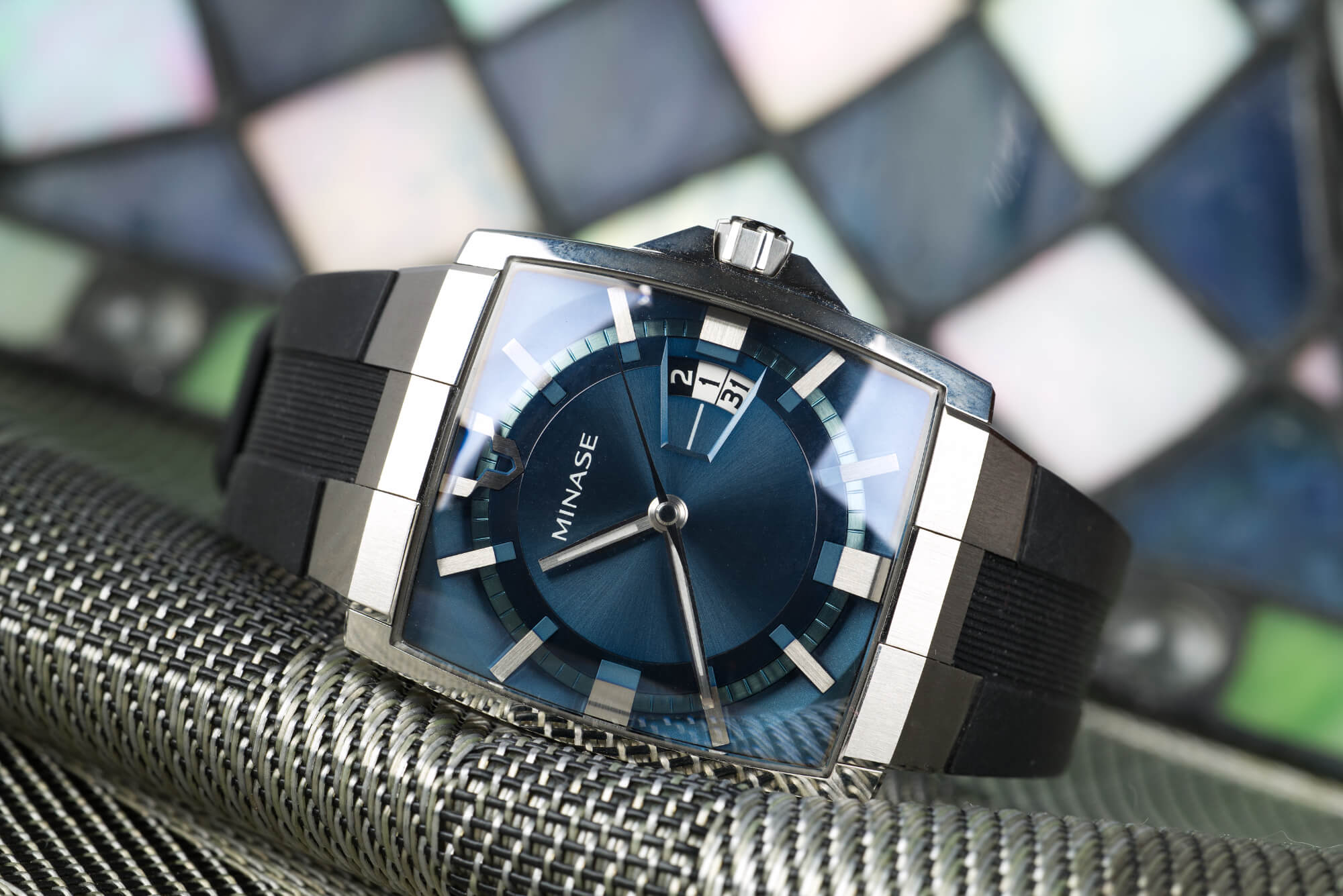 I boxed up the Horizon 2.0—tying the included branded cloth around the box as I received it—and felt mixed emotions. On one hand, I was bidding farewell to a brilliant and unique case design with an equally impressive dial. On the other hand, I was never fully satisfied with the Horizon in particular, with its boxy wrist presence and stiff strap. That’s to say, I was intrigued but the Horizon wasn’t the Minase I’d get. When I was chatting recently with Sven Henriksen, he told me that what attracted him to Minase was that there was nothing to compare it to—after working for so long in the Swiss watch industry, he couldn’t think of another watch like the ones that Minase was making. I think that’s a big part of the brand’s appeal: not just beautiful watches, but uniquely beautiful watches. The Minase Horizon 2.0 is priced starting at CHF 4,300. For more information, please visit the brand’s website.

Necessary Data
>Brand: Minase
>Model: Horizon 2.0
>Price: CHF 4,300 on rubber/CHF 5,500 on steel bracelet
>Size: 38mm diameter, 12mm height, 51mm lug-to-lug
>When reviewer would personally wear it: Almost any time as a versatile sports watch, aside from more formal situations or scenarios where the watch may get banged up
>Friend we’d recommend it to first: Watch lovers looking for exceptional finishing from a different Japanese brand
>Best characteristic of watch: Dynamic case and its finishing; rich color and depth of the dial
>Worst characteristic of watch: Rubber strap is stiffer than I’d prefer, watch wears boxy, “open” date display isn’t for everyone.