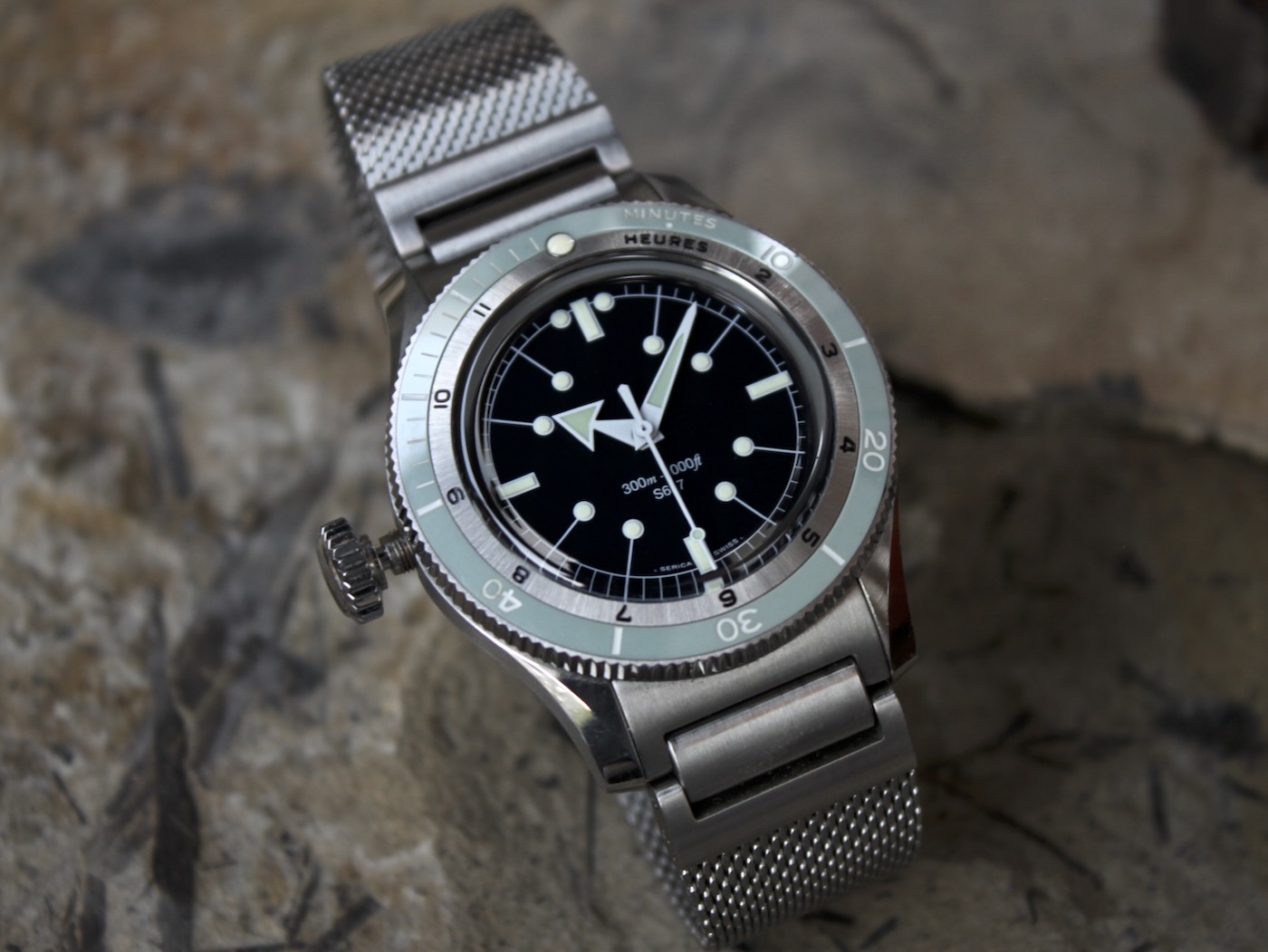 As a young brand, introducing a vintage-inspired dive watch in today’s oversaturated market is a bit of a risky proposition, to say the least. How do you differentiate yourself amongst the myriad brands dusting off back catalogs and reissuing watches from their archives, or the plethora of new brands offering classically styled skin divers and throwbacks straight from the 60s and 70s? You do it by creating a design that’s at once familiar, yet fresh in its design and impeccable in its execution. Easy, right? Not so much. Yet Serica has done just that with the 5303-3 — a beautifully executed skin diver, designed in France and made in Switzerland. 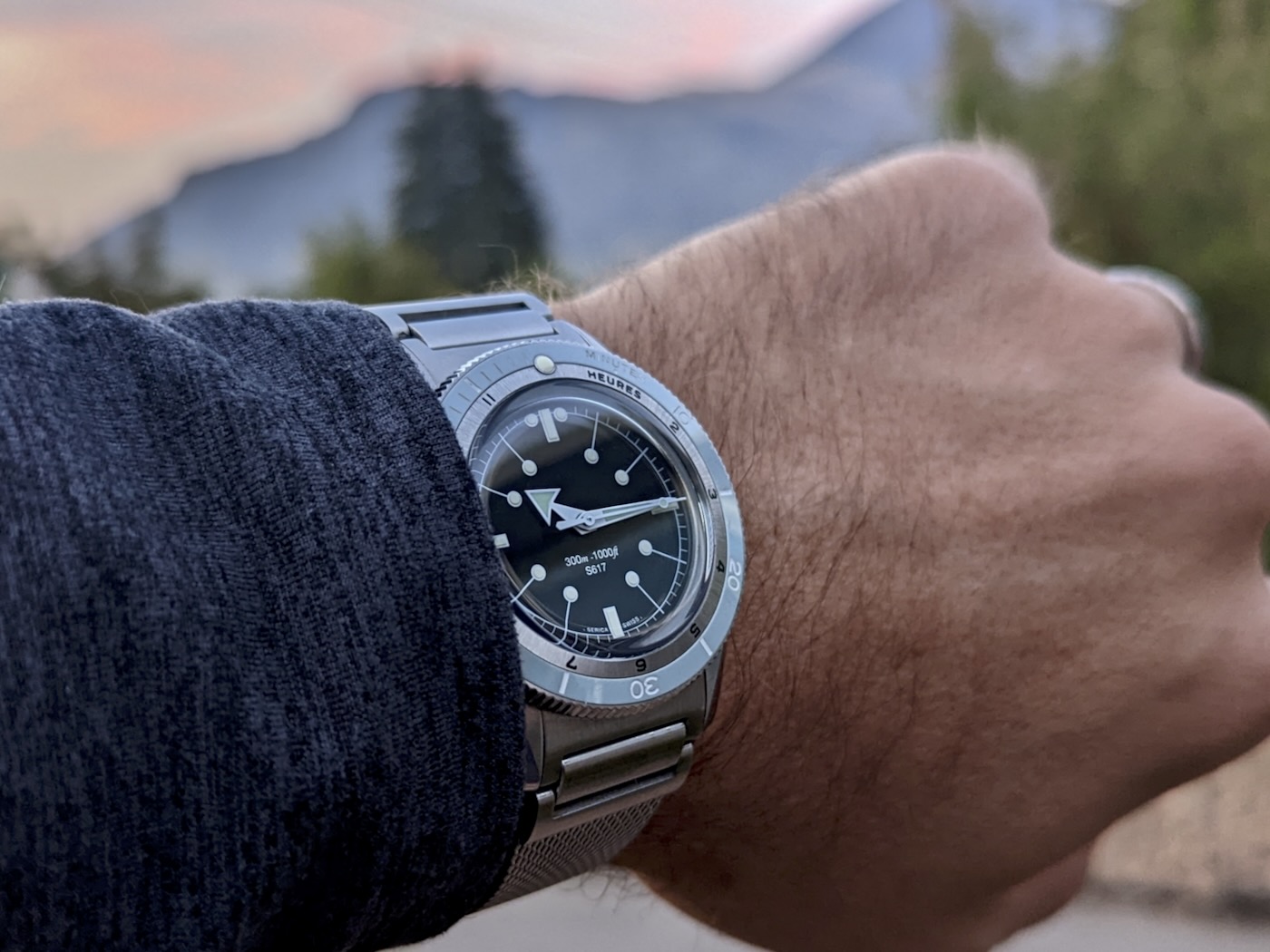 To understand how Serica created the 5303, you need to know the brains behind the brand: Jérôme Burgert and Gabriel Vachette. The two Frenchmen have plenty of years working in design, photography, and within the Swiss watch industry. In 2009, just two years after aBlogtoWatch first launched, the two started the French watch website Les Rhabilleurs. Suffice it to say, the two are no strangers to watches. After years of writing about watches and working directly with brands and suppliers in Switzerland, the two realized that, together, they could create something new and special. The goal was to design watches that they wanted to wear, not watches built to the lowest common denominator, designed simply to appeal to the largest market possible. The first watch the two created was a field watch dubbed the “4512.” The 4512 was unmistakably a field watch yet was designed with plenty of unique elements, created in conjunction with partners in Switzerland the pair had known for years. For its sophomore release, Serica decided to broaden its offerings with a dive watch, but of course, it did so with its own distinct flair. 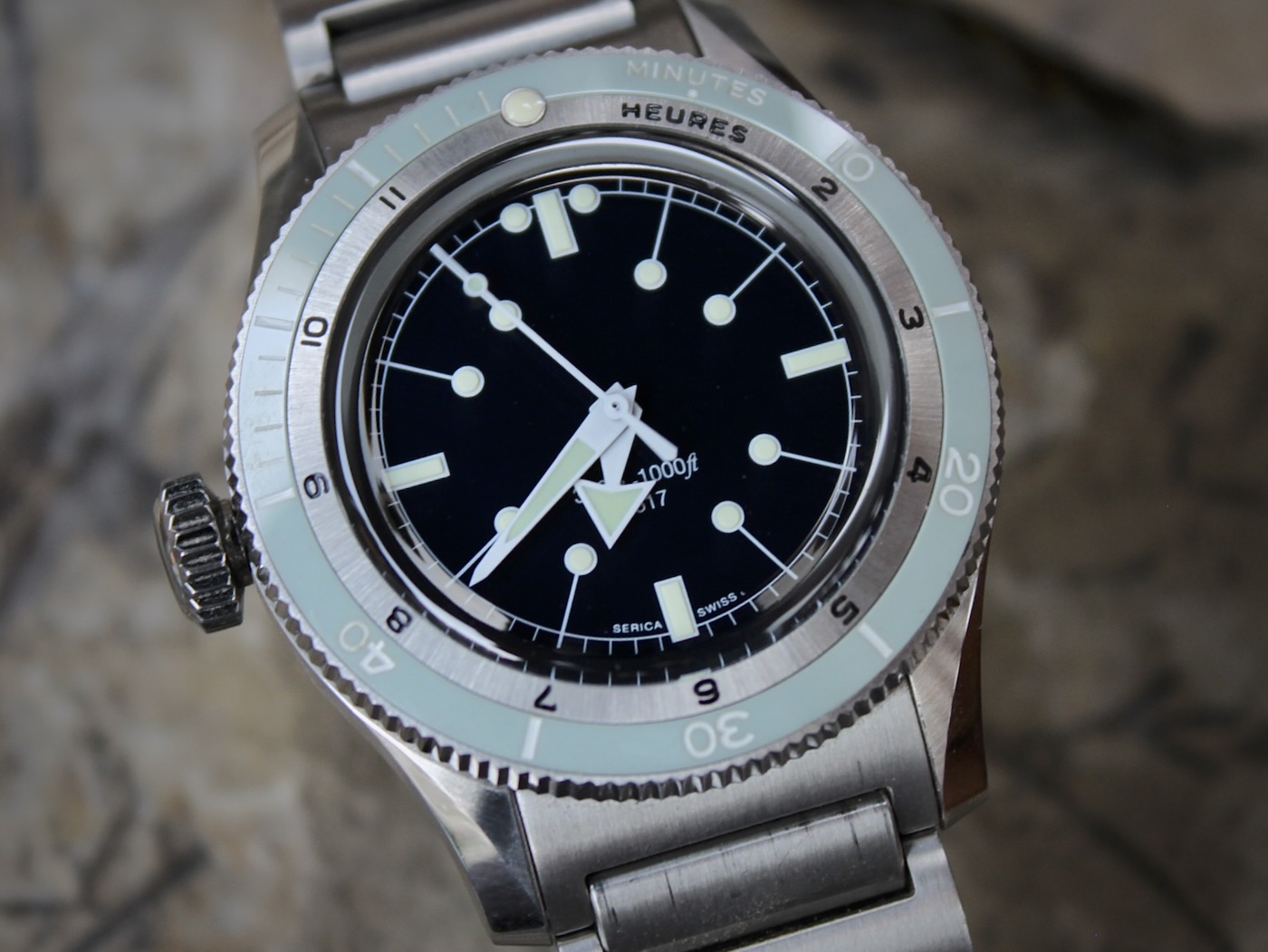 The new 5303 is offered with a black, white, or blue dial with the option of a crown at 3 or 9 o’clock. Now, you can’t talk about the dial on the 5303 without talking about the bezel, as the two are seamlessly integrated — especially on the blue-dialed variant, 5303-3. This model features a deep, midnight-blue dial coupled with a ceramic seafoam blue outer bezel (the brand calls it “crystal blue”) and brushed steel inner bezel. Due to the double-bezel construction, the outer being a timing bezel and the inner a 12-hour ring, the diameter of the dial itself is relatively small, reducing the visual weight of the watch. This effect isn’t dramatic, nothing like a DOXA Sub 300; ultimately, it simply enhances the vintage design cues. 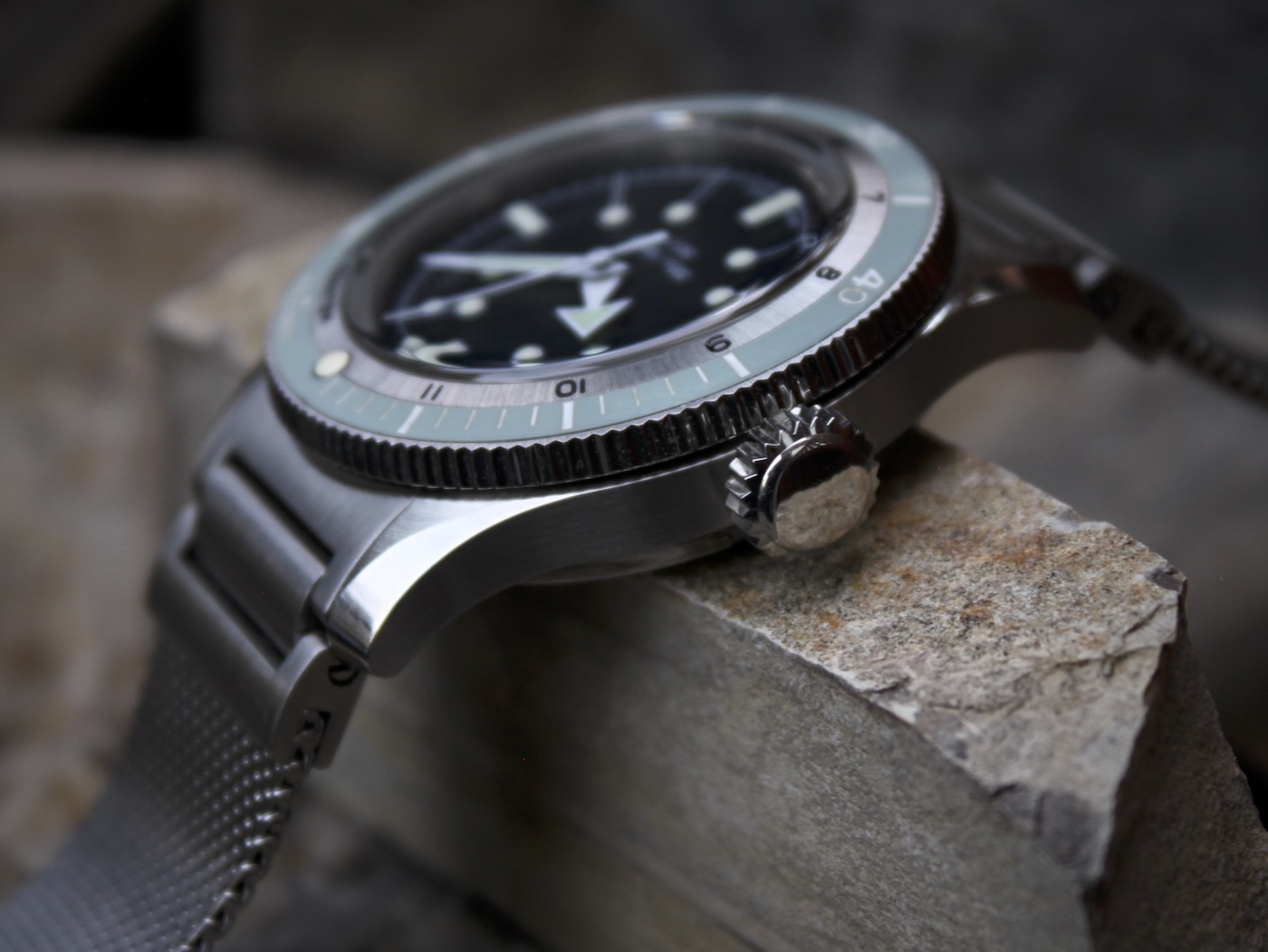 The struggle for designers is figuring out how to take familiar design elements and make them fresh and new. Circles and rectangles have been used as indices on dive watches for nearly 70 years at this point, so sticking with that archetype, but making it interesting is no easy task. Serica, however, did just that. By moving the circular indices inboard, they’ve effectively created a series of lollipop indices that completely transform the dial. In addition, the 12 o’clock markers are more reminiscent of those found on pilot watches, or the Omega Speedmaster. Complementing the dial is an oversized handset with a broad arrow hour hand and plenty of C3 Super-LumiNova on the hands and indices for nighttime legibility. C3 has seemingly gone a bit out of vogue, with many brands choosing the clean white of BGW9, but if you’re looking for bright, long-lasting lume, C3 is hard to beat. With this colorway, C3 was the way to go, as the slight green tint in daytime plays nicely off the white surrounds on the hands and indices and the light seafoam of the outer bezel. 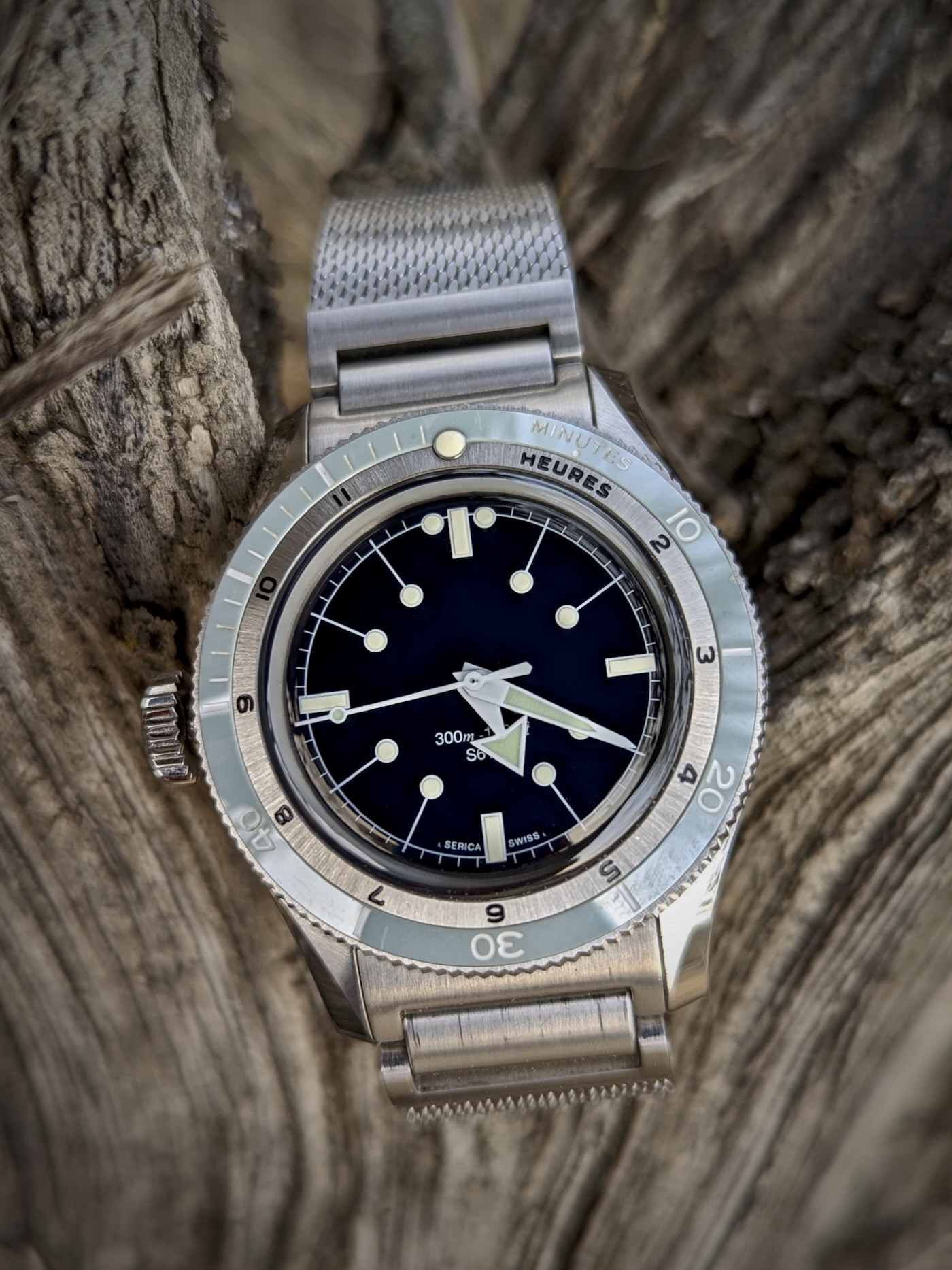 Text on the dial is kept to a minimum, with only the depth rating and S617 above 6 o’clock. Serica Swiss is tucked away just above the chapter ring at 6 o’clock. It may seem odd for a new brand not to place its logo front and center on the dial, but as Jérôme explained, the idea was for the brand to develop a design language that stands on its own, to create watches that are appealing solely due to their design, not marketing. In other words, Serica is challenging itself to create a lineup of watches immediately recognizable as Serica, without resorting to overt branding. So far, so good. 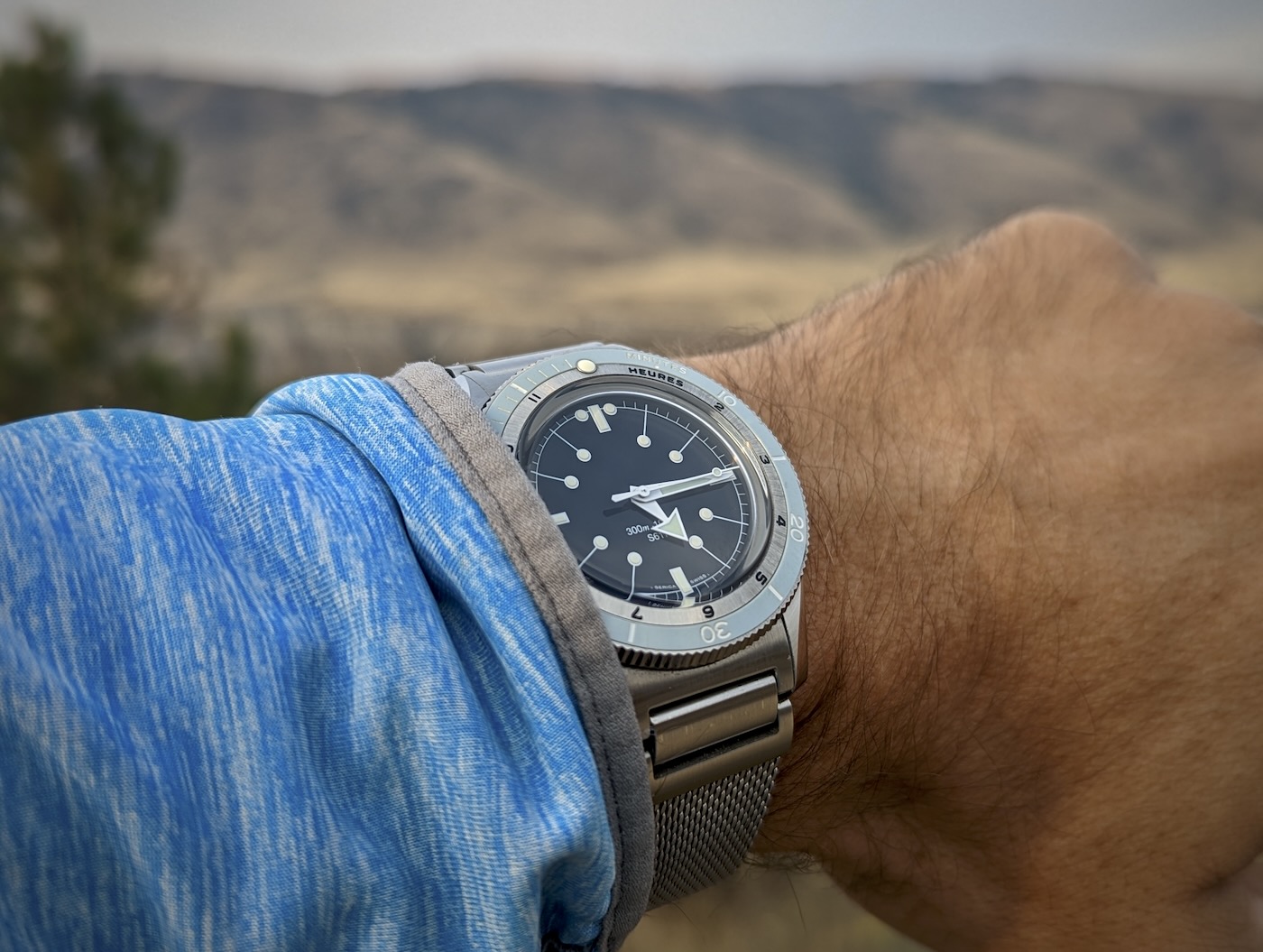 If you’re wondering why the watch has S617 on the dial, while the reference number is 5303, you’re not alone. It turns out that Serica was originally going to name the watch after the famous French nuclear submarine Le Téméraire (The Brave). However, after releasing the 4512 field watch, Serica decided to go with 5303 as a tribute to one of the most historic years in horology: 1953, the year Rolex, Blancpain, and Zodiac released watches with rotating bezels and large, luminous indices. The rest, as they say, is dive watch history. 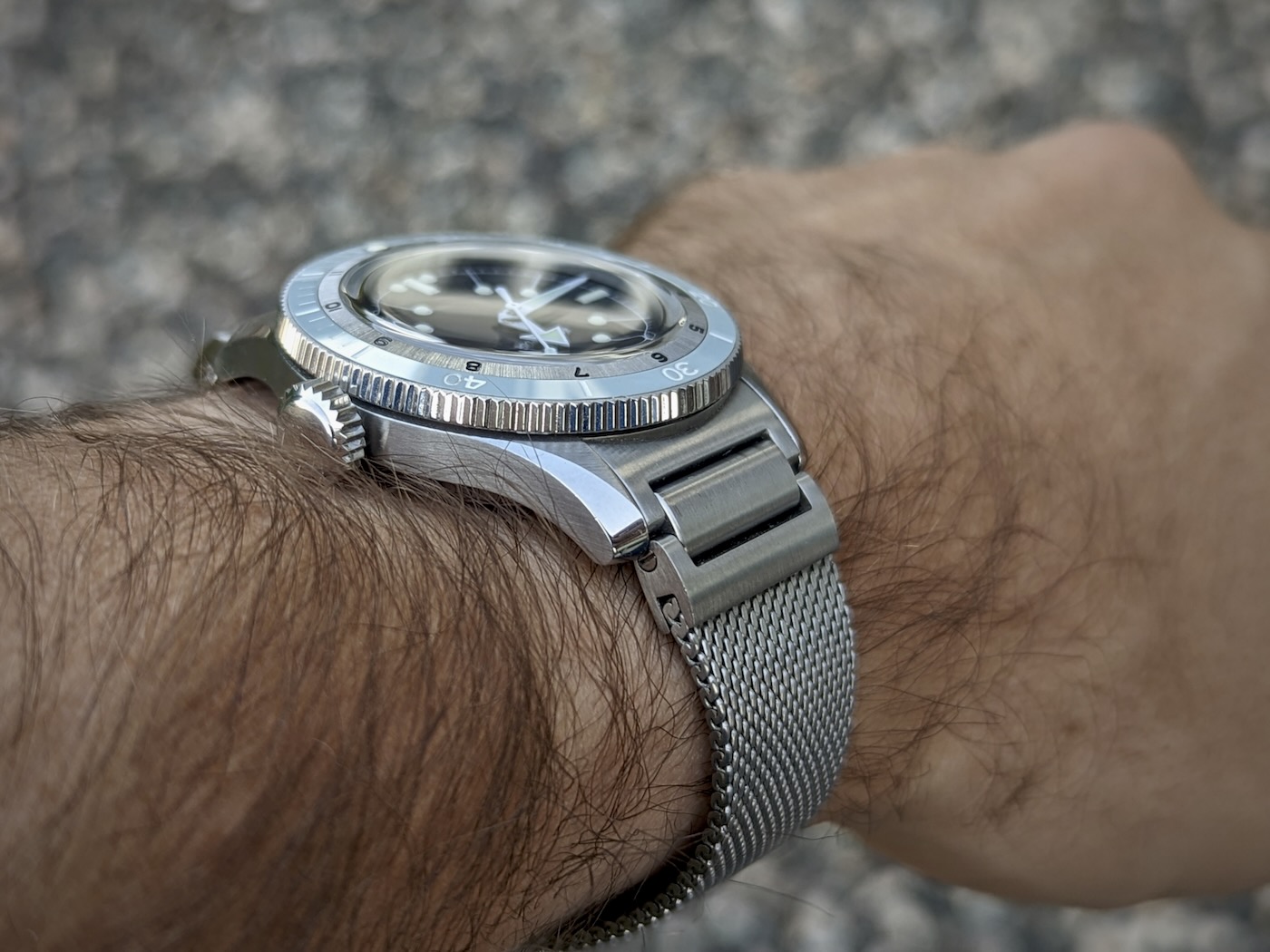 You can’t talk about the dial without talking about the bezel. Both the black and white dial variants (5303-1 and 5303-2, respectively) feature a black outer bezel, while the blue dial variant, reviewed here, uses a light seafoam blue. Sure, Serica could have gone for a color-matched deep blue, but the choice to go with this soft, warm blue makes this colorway shine, especially when coupled with white numerals and markers. A couple other small touches set the bezel apart, including the subtle Minutes text at 5 o’clock and the time demarcated with one-minute increments between 45-60 min (something usually found between 0-15 or 0-20). Inboard from the outer ceramic bezel is an inner brushed steel ring with Heures (hours) at 1 o’clock and hour indications throughout, allowing the bezel to operate both as a classic dive bezel and a simple way to add a second time zone. This style of double bezel is rather uncommon, but super useful, especially when executed this cleanly. However, the text is quite small, so not easy to read without glasses if your eyesight isn’t the best. 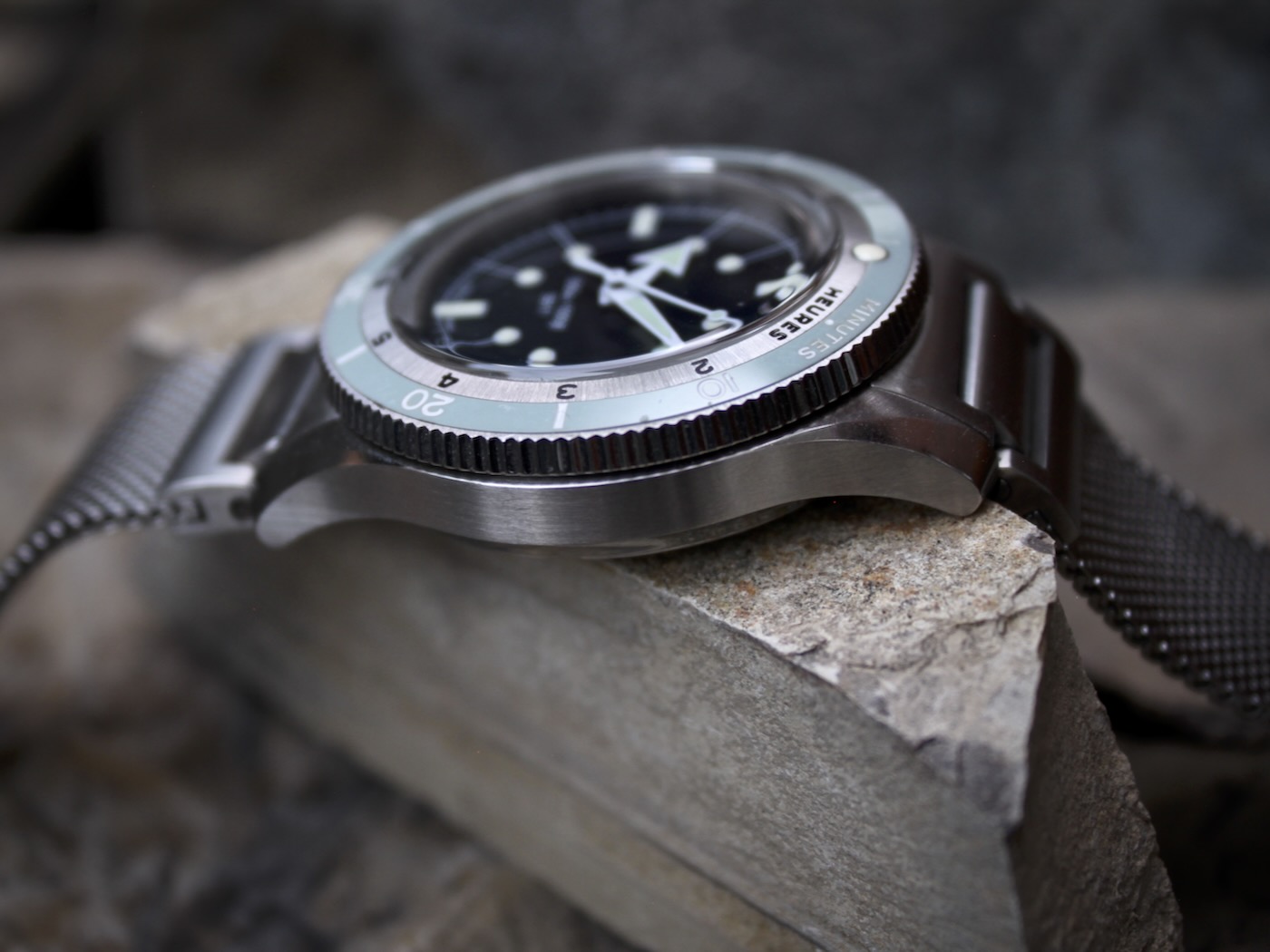 While the dial and bezel, as usual, are the focal points of the 5303-3, Serica has spent plenty of time on the design of the 39mm case (46.5mm lug-to-lug). Surfaces on the 316-L stainless steel case are a mix of polished and brushed, with a prominent chamfer running from 4 o’clock to the inner lug, creating something of a twisted-lug effect. The mid-case is slim, reducing the visual weight of the case, an effect that’s maintained by avoiding the use of crown guards and, instead, opting for an oversized screw-down crown. One of the great options Serica provides is the choice of having the crown positioned on either the 3 o’clock or 9 o’clock side of the case — something we’d love to see more brands offer. Whether you’re left-handed or simply prefer having the crown tucked away from the bend in your wrist, it’s great to see the option of a destro crown. Plus, it adds a bit more funk to an already funky watch. Finishing off the details, Serica went with an unadorned screw-down caseback and, on the flip side, a box crystal. The crystal itself rises only about 1mm above the bezel, so it doesn’t result in an awkwardly tall case height (the watch is only 12.2mm) or too much distortion. 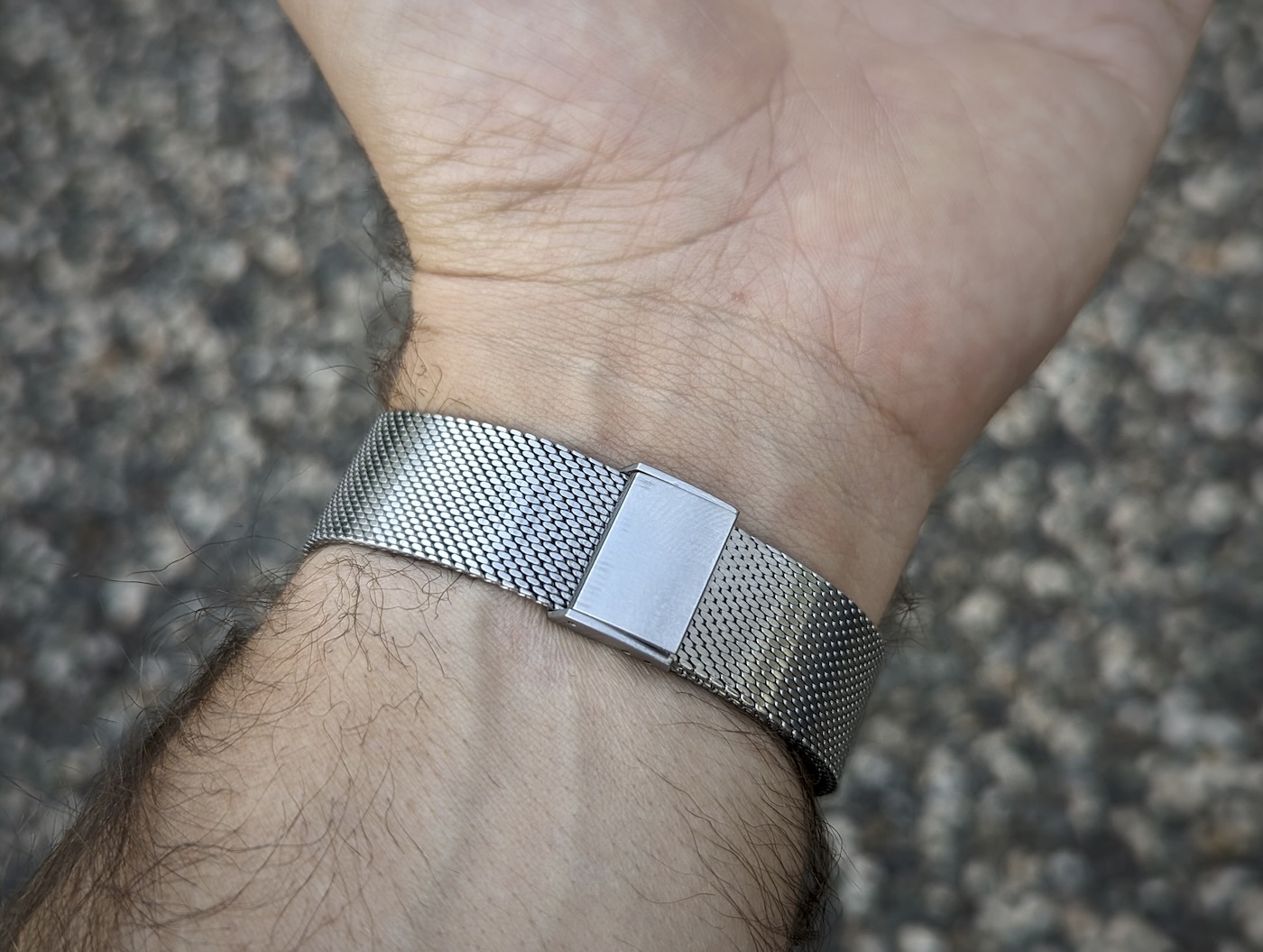 Rather than choose a standard three-link, oyster-style bracelet or the ever-popular beads-of-rice for vintage throwback pieces, Serica designed a bracelet from the ground up to complement the 5303. Serica wanted a bracelet with vintage vibes but one that leaned more toward slim and refined than burly and overbuilt, thus the choice to go with a 20-16mm tapering Milanese mesh. If you’re unfamiliar, this style of bracelet tends to conform beautifully to the wrist, while breathing more than a standard bracelet. The downside, however, is that they typically terminate with straight lugs that leave a gap between the case and bracelet. Serica got around that constraint by designing a custom end-link to match the case. 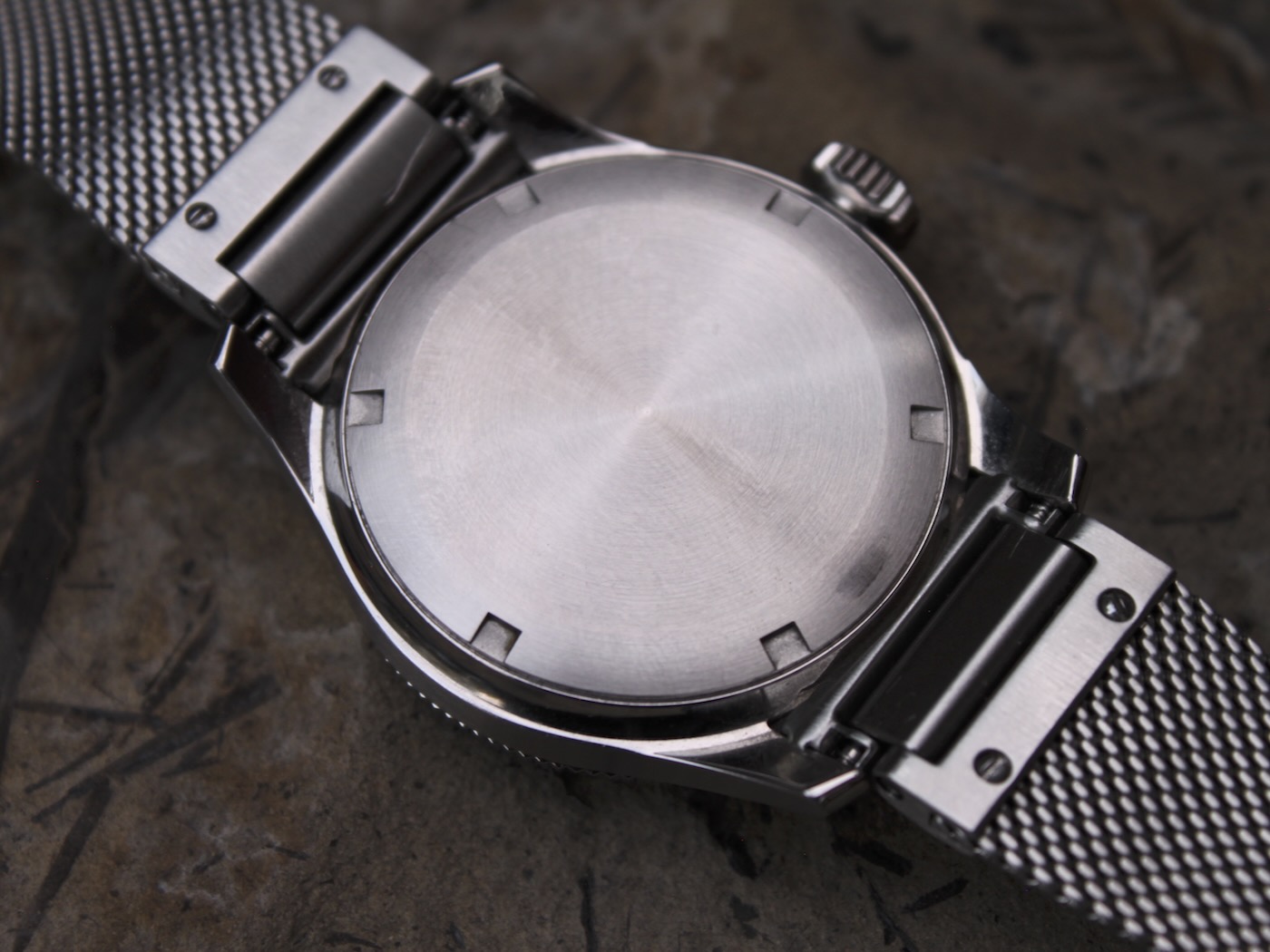 Because the end link has a female connection, the bracelet articulates close to the case itself, meaning that the watch is a great fit on smaller wrists (mine is 6.75”). Whether you like the look is another matter altogether, but it does suit the overall funky vibe of the watch. That said, there are a couple of small issues. One is that the brushing of the end links contrasts polished bevels and fine brushing of the case; it’s not a big deal but something to note. Another thing worth mentioning is the clasp. The tail of the bracelet slips through the clasp and through to the underside of the bracelet, securing via a simple friction clasp. The upside is that the design is sleek and comfortable, great for wearing around town; plus, adjustment is quick and easy. The downside is that the bracelet is a bit fiddly to put on until you get used to it, and there’s no safety net if the clasp isn’t fully pressed down or gets jarred loose. In other words, if you plan to spend much time in the water or getting rough, it would be smart to pick up another strap option, like the tropic-style straps Serica also offers on its website. 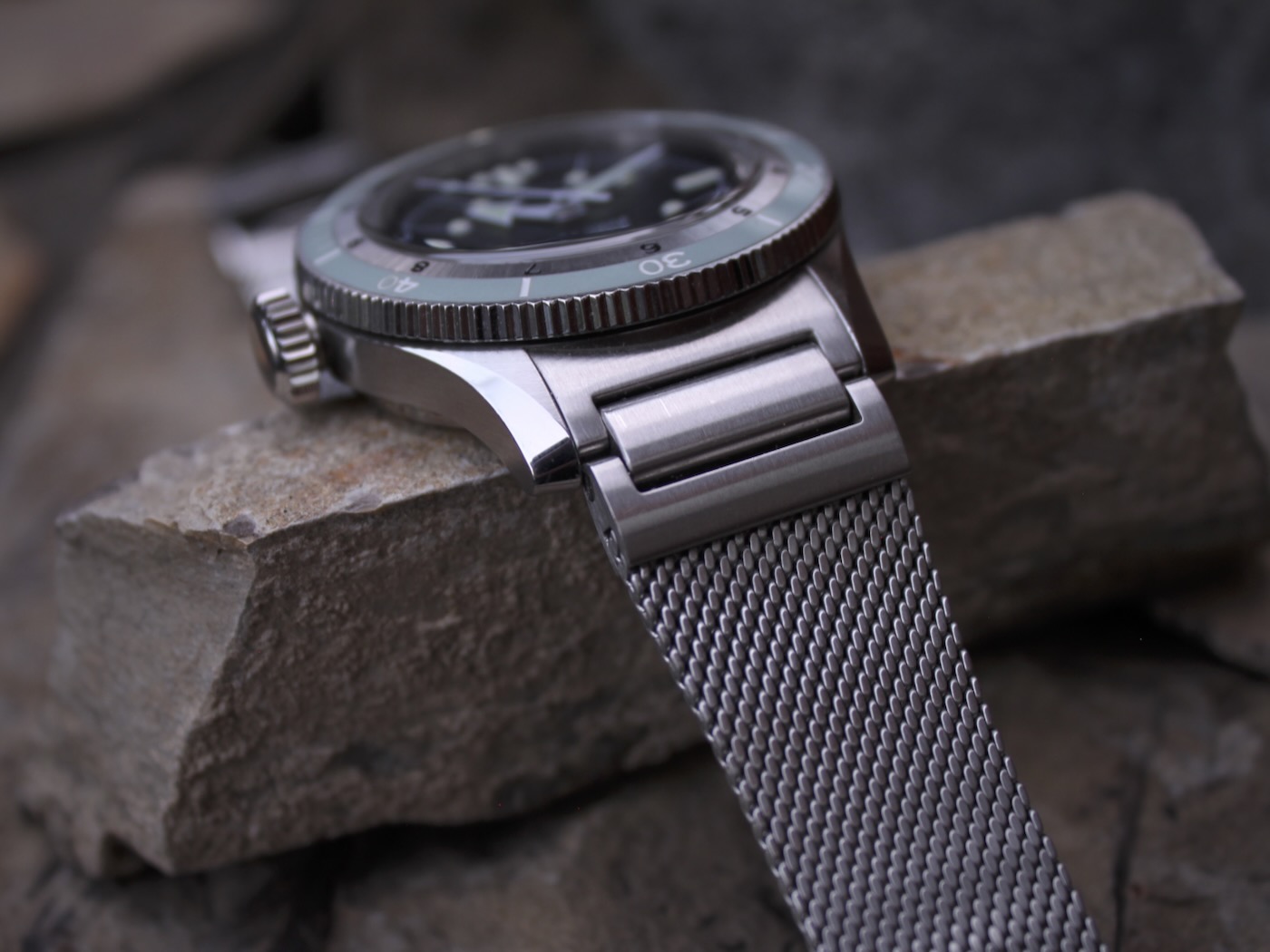 Rather than choose a familiar movement like the Sellita SW200-1, Serica opted for a movement we don’t see often: the Soprod Newton. Soprod is a Swiss movement manufacturer and we’ve seen plenty of watches equipped with the A-10 caliber (an alternative to the ETA 2892-2). The Newton is a new caliber from the manufacturer, released just a couple years ago. When Swatch announced the end of outsourcing the ETA 2824-2, Soprod saw this move as an opportunity to create a mass-produced, attractive, and reliable movement it could offer as an alternative to the ETA 2824-2 and its doppelgänger, the Sellita SW200-1. The specs for this automatic movement are in line with the other Swiss stalwarts, beating at 28.8kbh and featuring a 44-hour power reserve; however, with the Newton, you also get -4/+4 accuracy and high-end shock protection. 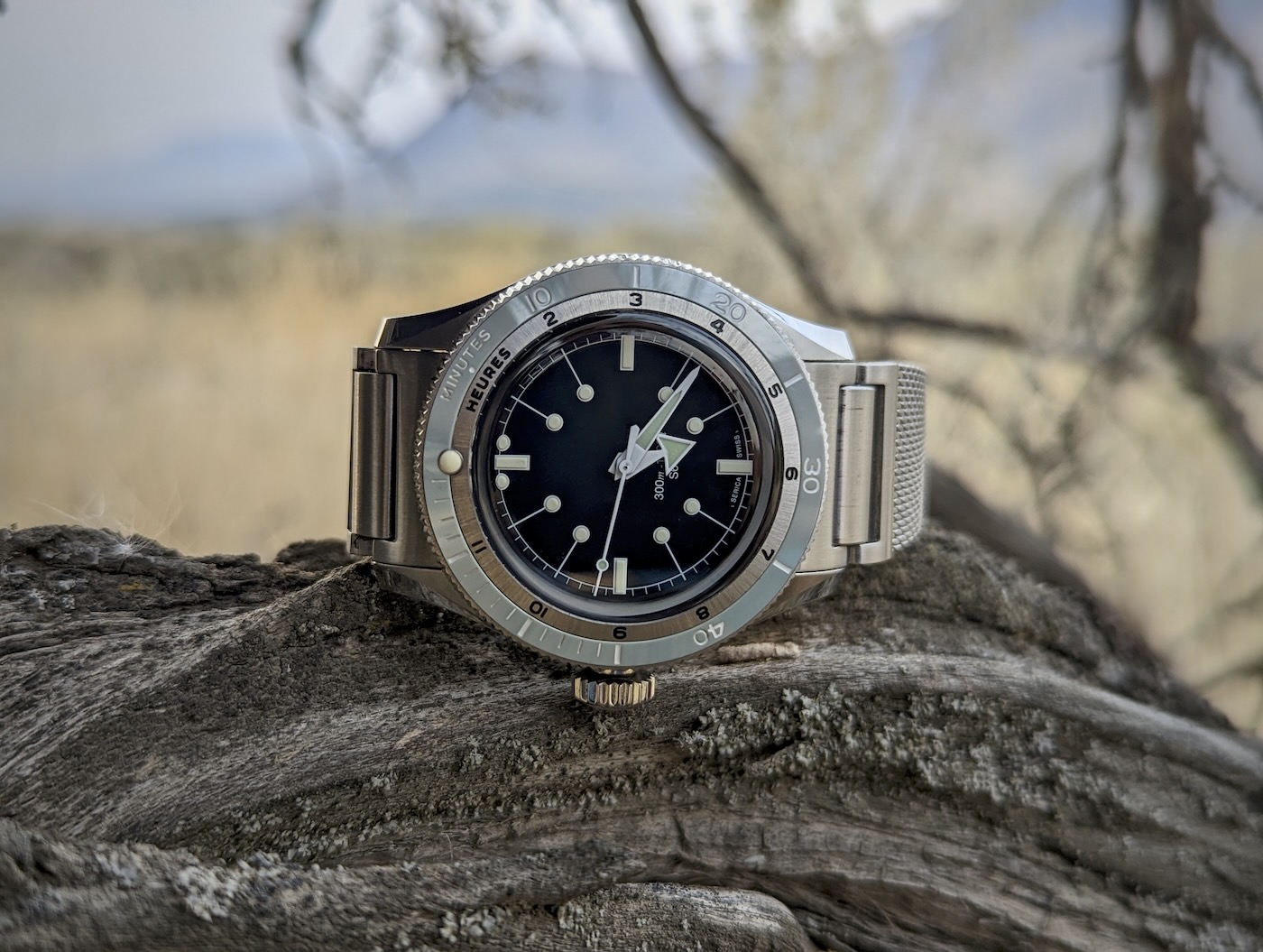 The reasons Serica went with the Newton movement were both personal and practical. Soprod is a major movement manufacturer, yet its team treated the upstart Serica just like the big brands, going out of its way to work with it and problem-solve as it developed the 5303. Plus, rigorous testing via golfing, surfing, and mountain biking (tough job) demonstrated that the Newton was up to the task. Though it’s a sample size of one, the watch we were loaned has been keeping excellent time, well within -4 to +4 sec/day. 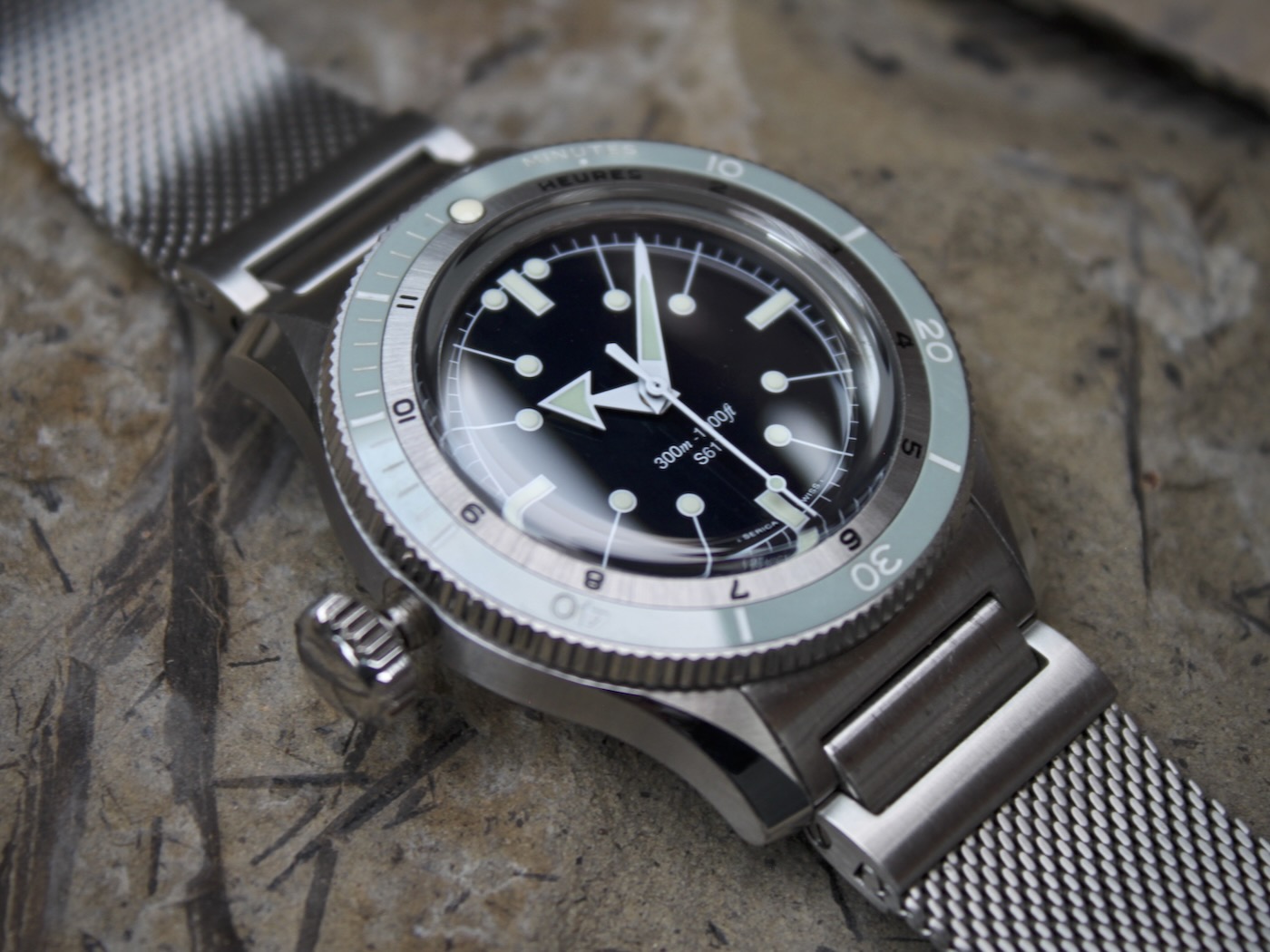 With the 5303 — and especially with this particular colorway — Serica has taken an important step as a brand, establishing a clear design language that transcends genre. In the coming years, Serica has its eyes set on expanding the range. We’ll have to wait and see what’s released next, but no doubt it will be instantly recognizable as a Serica, even without a logo on the dial. Priced at 1,075 € excluding VAT, the Serica 5303-3 offers solid value in terms of spec and stellar value in terms of style. All told, the Serica 5303-3 is a beautifully executed dive watch that’s an absolute standout in terms of style and design. For more information on Serica watches and the 5303-3, please visit the brand’s website.

Necessary Data
>Brand: Serica
>Model: 5303-3
>Price: 1,075 € excluding VAT
>Size: 39mm diameter, 46.5mm lug-to-lug, 12.2mm thickness, 20mm lug width.
>When reviewer would personally wear it: This would be my first choice for enjoying a summer night with friends on an outdoor patio.
>Friend we’d recommend it to first: Design-conscious friend looking for a well-built diver with vintage vibes, a novel design, and an interesting colorway.
>Best characteristic of watch: Unified design and contrast between the dial and bezel.
>Worst characteristic of watch: Bracelet is a bit fiddly to put on and lacks a safety catch.