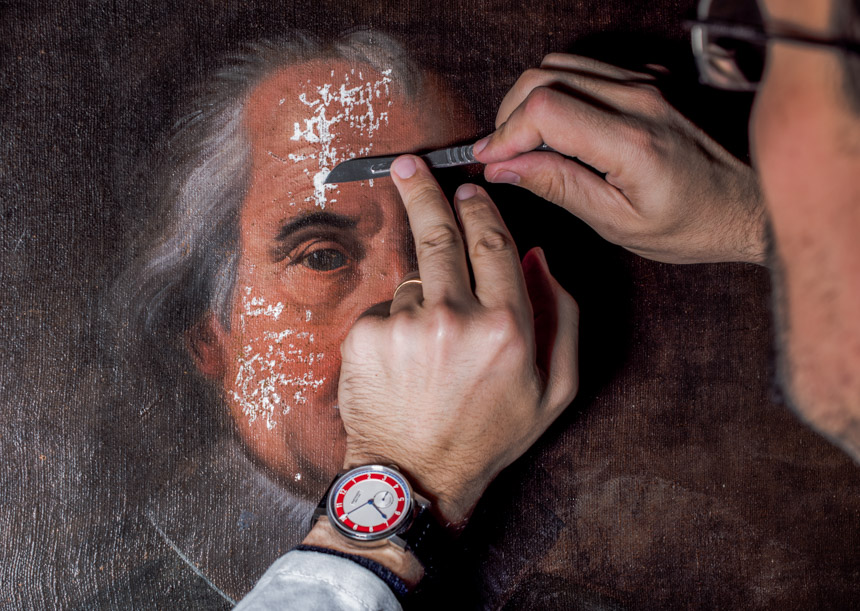 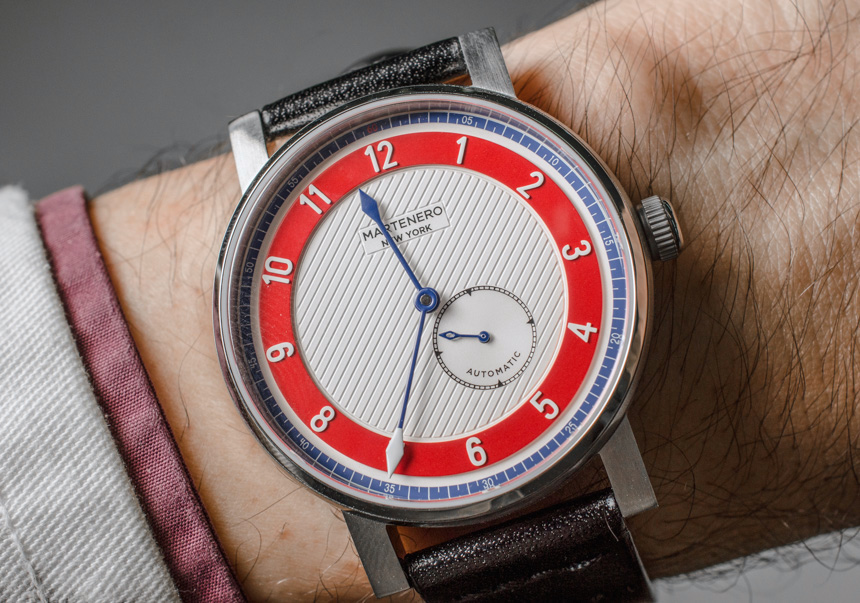 In August of 2017, the monthly giveaway watch on aBlogtoWatch was a Martenero Edgemere Automatic watch. The winner was David B. from Qrendi, Malta and after enjoying his new timepiece (retail price $550), he has given a watch winner review for us to share with you – the aBlogtoWatch audience. Thanks to David and all the other watch winners who share their experiences with the world. Here is David’s review:

During August, when the White/Red Martenero Edgemere watch giveaway appeared on aBlogtoWatch, I immediately recalled it from my daily browsing and decided to give it a go. The colors of this watch do not only make it very distinctive and attractive but also special for me since it reminds me of the Maltese flag – the tiny island in which I reside. However, I must also admit that I have never been daring enough to purchase such a colorful watch myself. And, even though I follow with great interest the emerging small brands such as Martenero, I always played it safe by purchasing from the bigger name brands. Therefore, before I got the watch, I eagerly waited with an equal dose of excitement and anxiety. Of course, I announced the good news to all my family, friends, and work colleagues with a smile on my face. At the same time, being well aware of my picky nature, I wondered whether I would actually like this watch on my wrist. 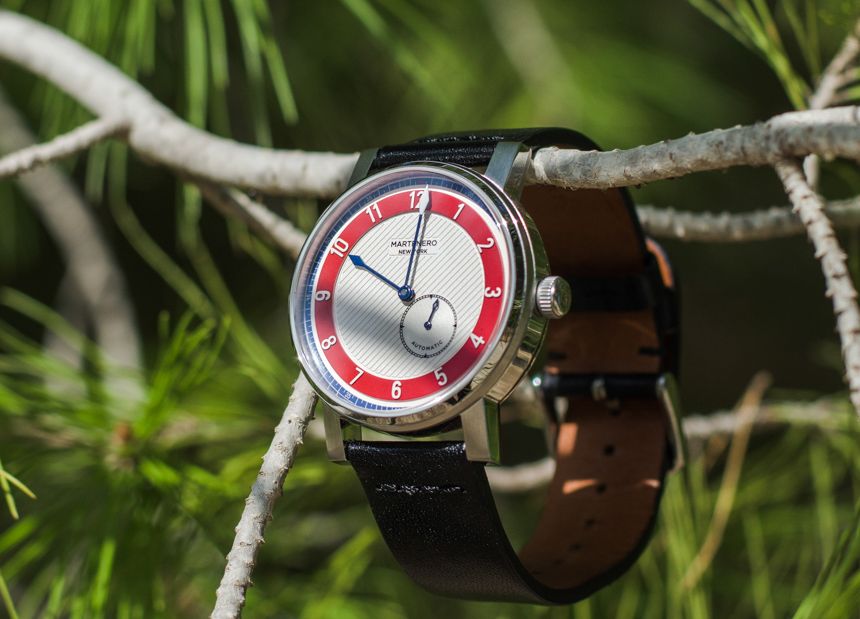 When I finally got the parcel from the post office, I could not wait to have it opened at home. So I eagerly unpacked it as soon as I got in my car to try it out. The watch sat in an attractive cardboard box that had two diagonal openings. Each opening bears a different texture and can be easily opened and closed with a magnet. I was pleased to note that the 40mm case appeared to be well sized for my 6.5 inch wrist. At first, I frowned at the black stiff leather strap. But, to my surprise, it turned out to be very comfortable. I also noticed that the band is less prone to wrinkling and manages to secure the watch firmly on my wrist. So the band deserves a big thumbs up. 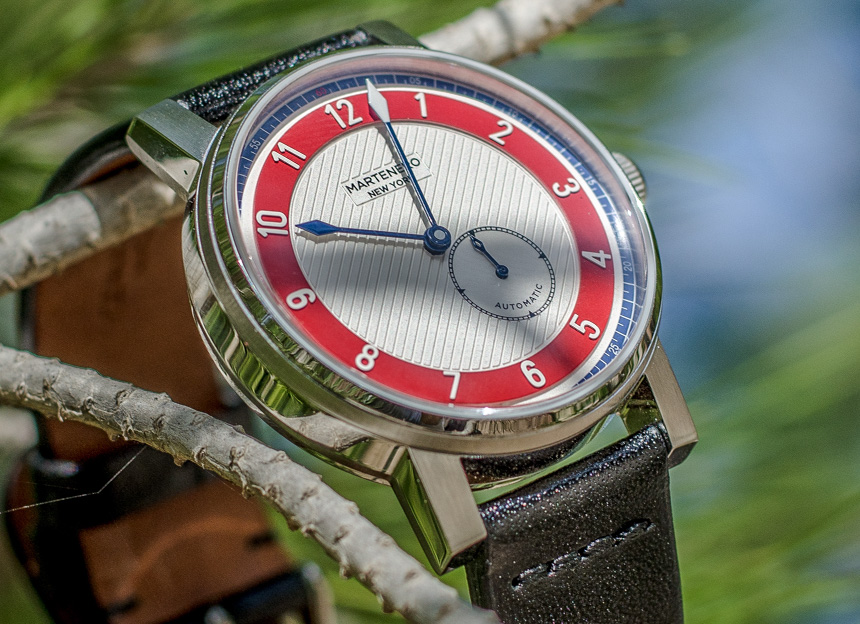 The most unique feature of the case that took me a while to get used to is the long and rectangular-shaped lugs. From a close distance, one can appreciate the level of craftsmanship, mainly by the different finishing textures that are evidently very well executed. The frontal brushed texture of the lugs, for instance, contrasts with the mirror-polished sides. Likewise, the bezel – that is made of two sections – has an upper polished ring sitting on top of another brushed one, each set at a different angle. These differences in metal finishing seem to accentuate the sharp edges and outline details of the case. I liked the fact that even the crown has been partly brushed and polished. I always believe that it’s the small details that make the biggest difference. 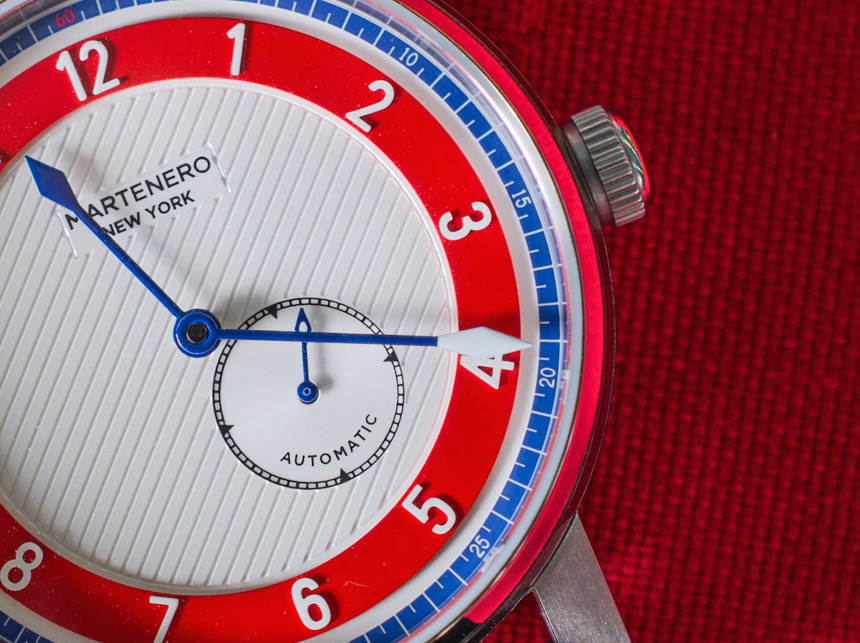 The crystal consists of a flat sapphire glass. The glass protrudes from the case by a fraction of a millimeter, presumably to protect the case from accidental scratches. The back of the case has been nicely decorated by engraving a nautical compass on the 316L stainless steel. The caseback is secured by four small screws and states that the watch is water resistant to 50m. This is mainly thanks to the screw-down crown. Such water resistance is welcomed since it makes the watch more practical and increases its longevity. I shall not miss stating that both the crown and the buckle are also signed, which is always a nice detail to have. 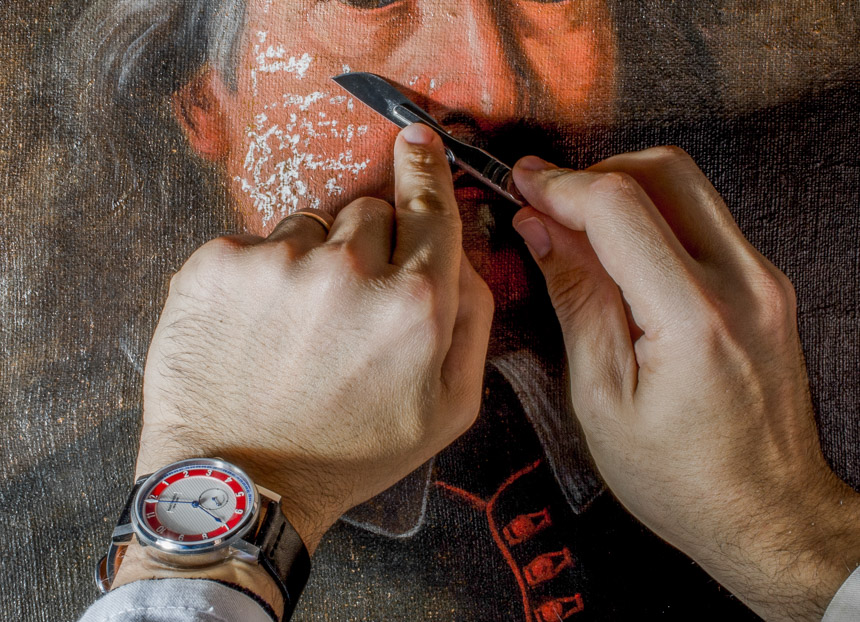 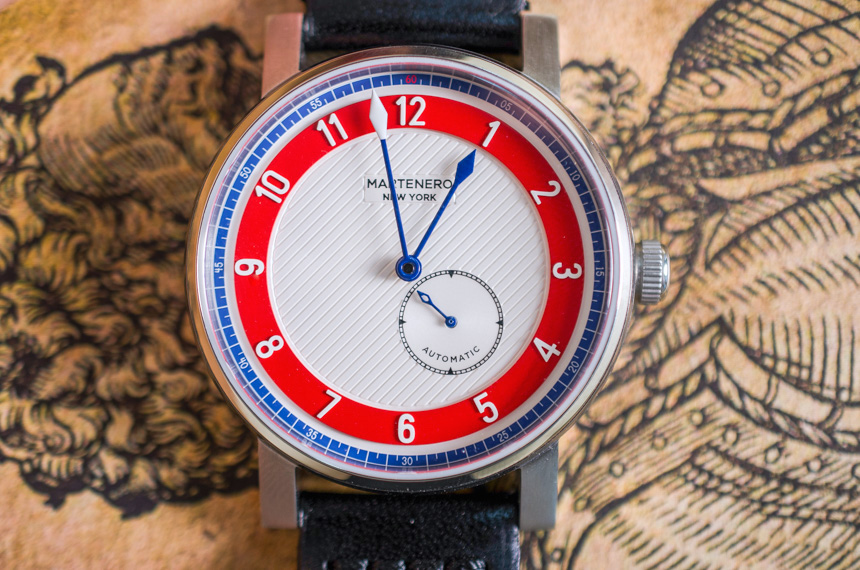 And of course, there is the dial. The White/Red model is, in my opinion, among the most attractive from Martenero’s collection. Instead of painting the dial in several colors, the creators opted for what appears to consist of an assembly of differently-colored components. At the very bottom sits an outer narrow blue ring that bears the minute markers in white. On top of the blue, there is the dominant white component of the dial, which appears to have a subtle iridescence. The pearly white dial tends to change its hue as it reflects the ambient colors. The central part of the white dial also features a linear groove-like texture set diagonally which tends to cast shadows and alter the character of the watch in different lighting. On the top rests the contrasting red ring that bears the hour markers in Arabic numbers that are also raised. 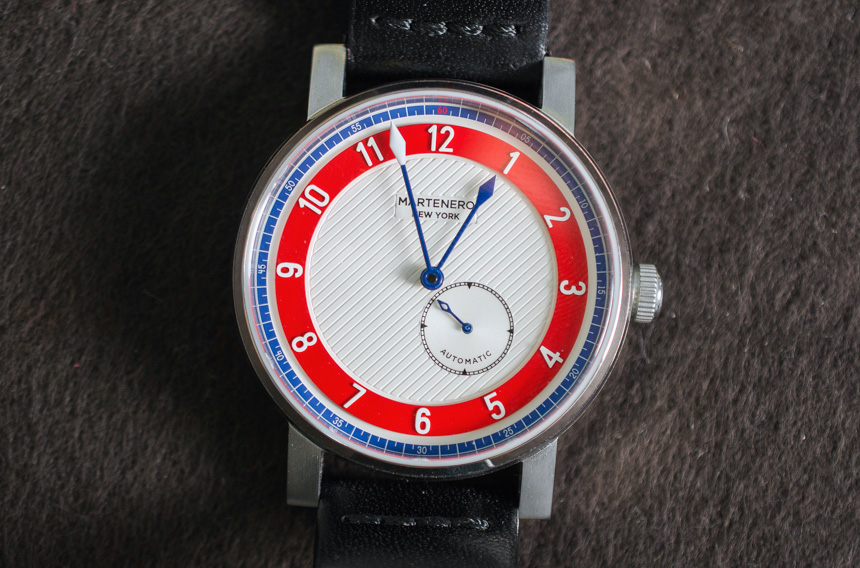 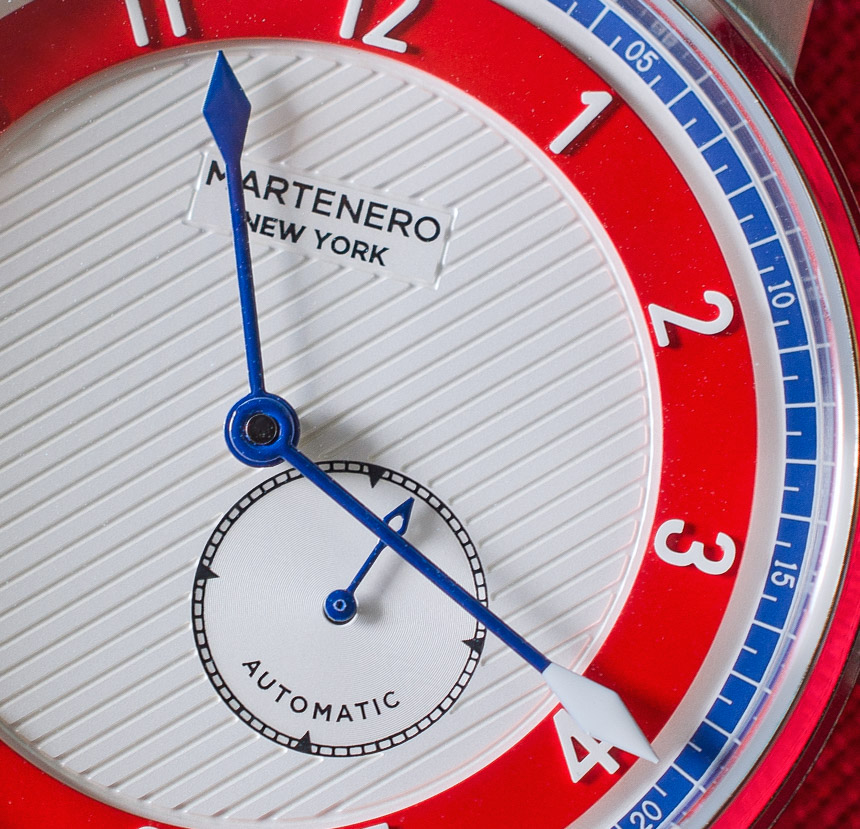 The hands are painted in blue. All hands are long and thin, ending with a diamond-shaped tip. The tip of the minute hand has been painted in white. I like the latter detail as it compliments with the red contour of the dial. Yet I often wonder whether a darker tip would have increased legibility of the minute hand. Another detail which I really like is the hollowed tip of the tiny second hand. The tips of the hour, minute, and second hand are all different for this particular model. I also greatly approve of the decision to keep the name of the brand inconspicuous, set in small letters on the dial. I tend to consider large logos as an overstatement and distasteful. I do not mind the ‘automatic’ print on the sub-second dial either. Overall, the dial has a fairly minimalist look which, in my opinion, should be present in every watch category mainly to increase legibility and function. 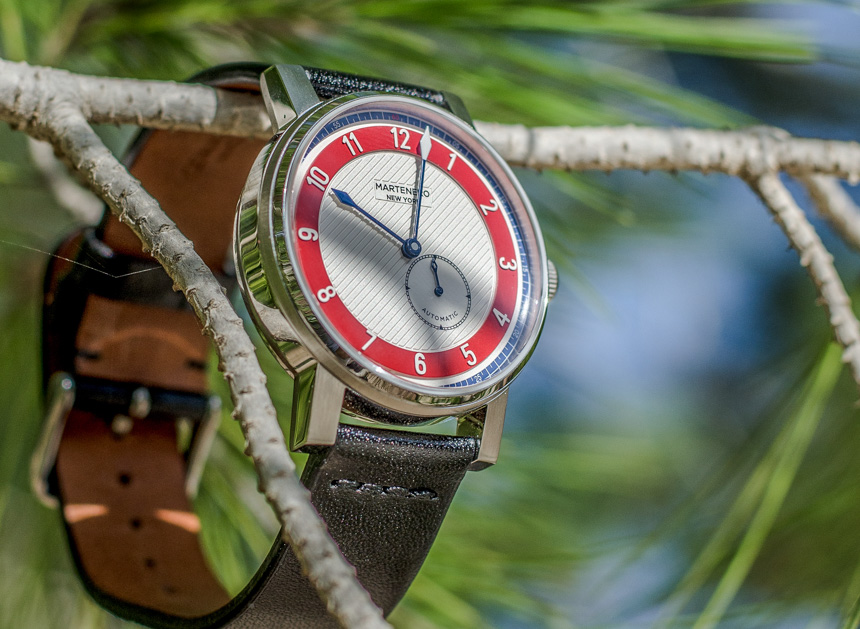 Perhaps the most difficult thing for this particular watch is to place it in a specific category. It is safe to say that this watch is definitely not a dress watch. The diagonal stripes of the white dial and the offset small seconds make it very asymmetric. The colorful dial also makes it playful and casual, making it easily adopted by the young generation. Yet, there is a touch of class and elegance in this watch mostly transpired by the slim hands, bezel, lugs, and plain leather strap. Even the crown is somewhat small for a screw-down type. Hence, I really enjoyed wearing this watch as I compiled reports in the office and whilst intervening on paintings inside the laboratory. Although the dial is not very slim, I managed to slide in the watch beneath most buttoned sleeves. It’s definitely a comfortable lightweight watch. 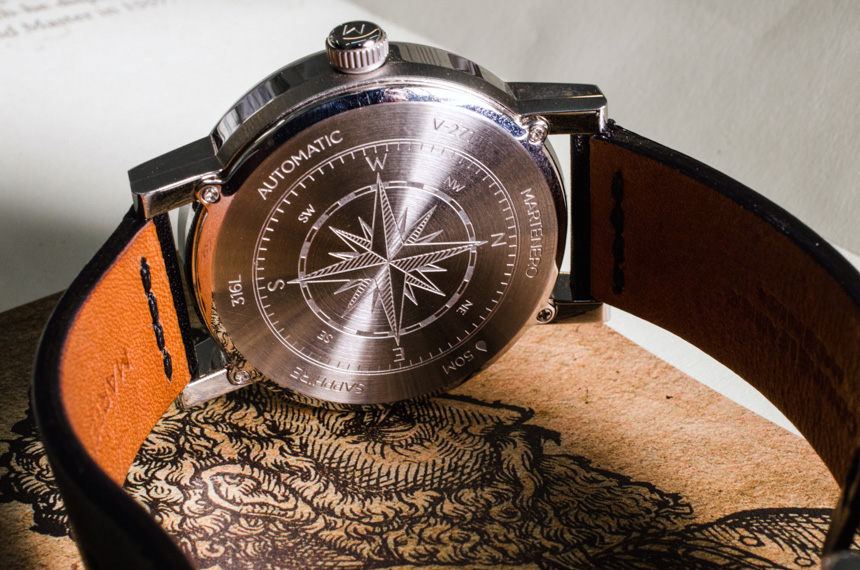 Whilst the outer components of the watch have the New York stamp, the heart of the watch comes all the way from Japan. It is a Miyota 8245. I was pleased to note that the winding rotor is fairly silent and the ticking of the movement is barely noticeable. The crown feels secure when unscrewed. The small second hand is not hacking, which I can live with. The greatest disadvantage, in my opinion, is the power reserve. The clock stops ticking during nighttime on my least physically active days. I see this happening with my other German watch that is powered with a Miyota 821 A. This does not occur with my other Japanese movements (Seiko 4R36 and Orient 469). So, to avoid any frustration, I would simply wind the movement before nighttime or decide to keep the watch on my wrist when I sleep if I miss my daily walk. 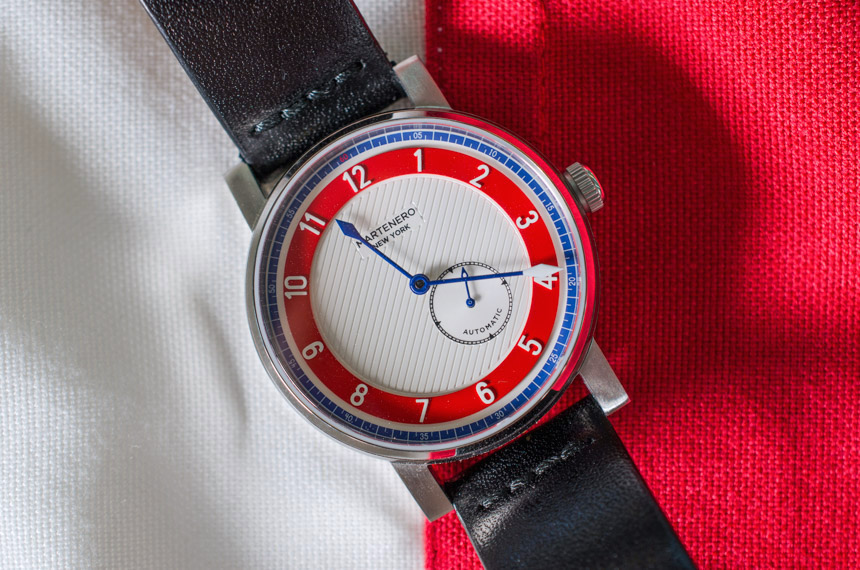 I must say that I am very pleased with the accuracy of the Martenero’s movement. I have the habit of checking the accuracy of my mechanical watches on a daily basis. I sincerely do not know whether this habit forms part of my hobby or obsessive-compulsive disorder. Of course, one must take into consideration that the accuracy of a mechanical watch depends on a lot of factors, such as temperature and positioning of the watch. Coincidentally, the movement was constantly slow by just one second every day. Eventually, I noted that the watch averaged a gain of four seconds per day, which could be easily taken care of by positioning the watch sideways during nighttime. 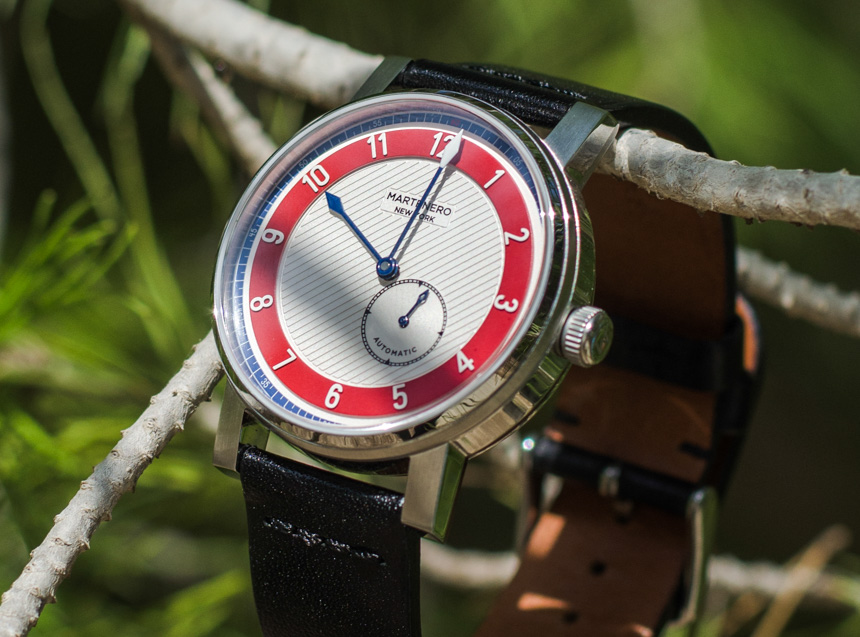 Overall, I like this watch and I would absolutely recommend it. I have been finally convinced that microbrands – such as Martenero – are capable of offering high quality watches with fresh and exciting designs that derail from the mainstream. My heartfelt thanks to aBlogtoWatch for this opportunity and Martenero for providing this watch. martenero.com