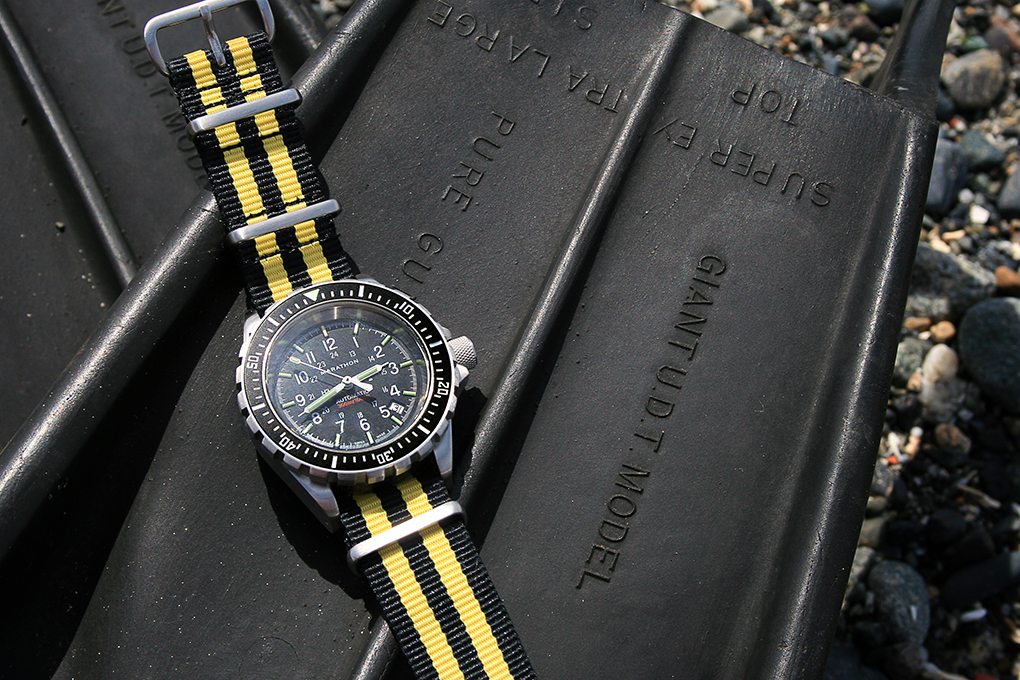 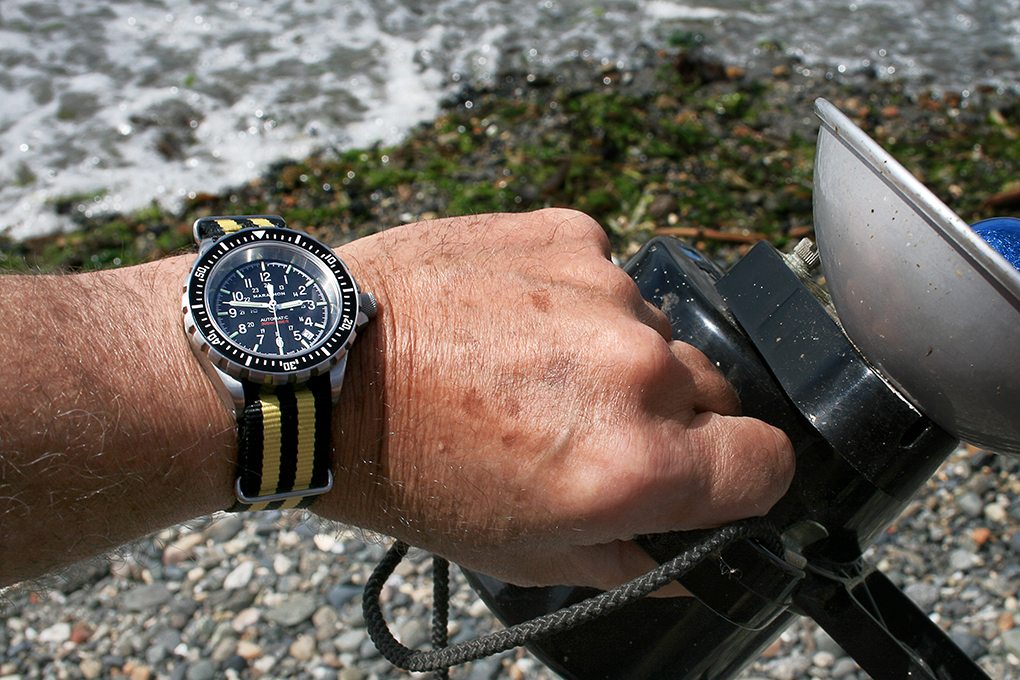 During the month of May 2016, we held a giveaway with the Marathon Watch GSAR on a Crown & Buckle Time For A Cure team NATO strap. This watch giveaway was special because it helped raise awareness for the Ride To Conquer Cancer, and that awareness translated into team Marathon Watch: Time For A Cure raising $27,514 for cancer research at Princess Margaret Hospital. With a retail price of US$1,150, this Marathon watch is also special because it couldn’t have been won by a more appropriate and appreciative person. So without further ado, we bring you a watch review by giveaway winner Kirk M. from Seattle, Washington.

“Any self-respecting dive watch fan should, at least at one point in his life, own a Marathon SAR. I think it’s just sort of a rite of passage.” 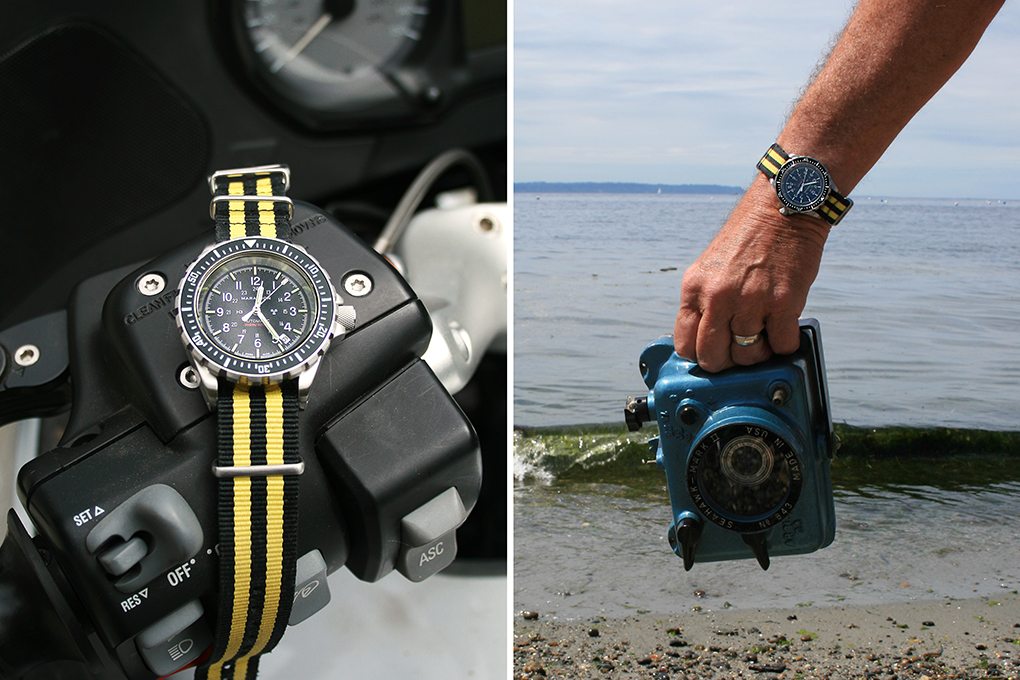 I was puzzled when I received an email from Bilal at aBlogtoWatch. Being a suspicious IT guy, I first assumed it was an oddly focused scam. I checked the masthead on the aBlogtoWatch website and saw that Bilal was the Managing Editor. Okay… it looks like I really won a Marathon Diver’s Automatic “GSAR” watch! I also received several official Crown & Buckle #timeforacure team NATO straps. 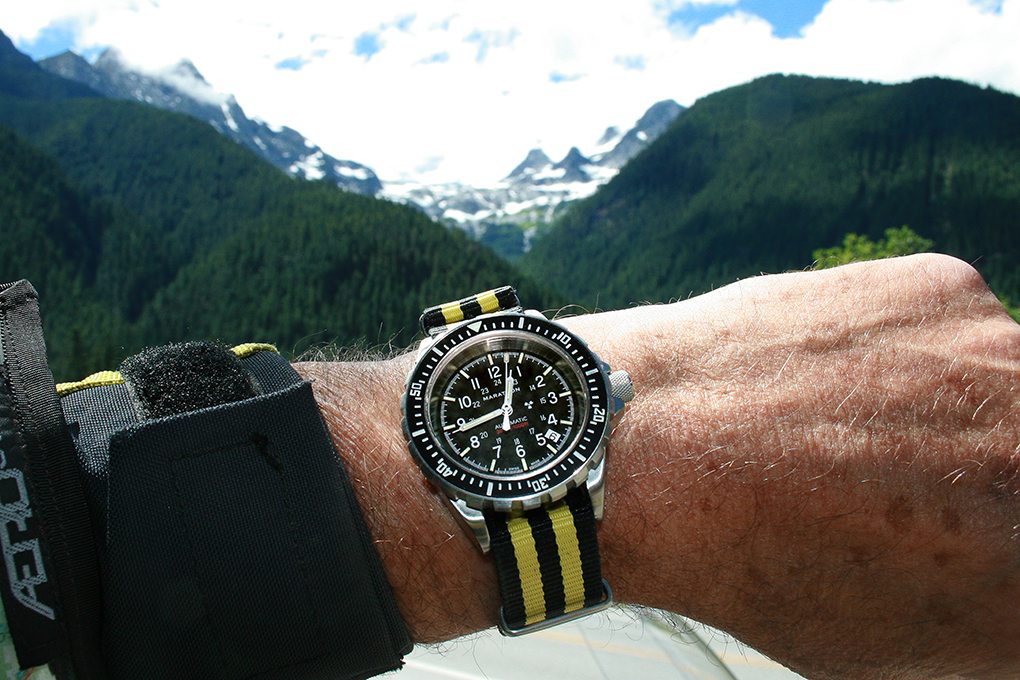 The fact that this giveaway was sponsored by Marathon and Crown & Buckle in support of Matt Smith-Johnson’s cycling team for the Ride To Conquer Cancer really struck home for me as my wife has been battling Stage 4 Triple-Negative Breast Cancer for several years. We thought she had it beat, but then the follow-up scans revealed that it had spread to her lungs. Later scans revealed lesions in her brain, and at this time last year we had returned from a vacation in Scotland to find that the “strained muscle” in her hip was actually cancer throughout the head of her right femur. It was discovered on a Wednesday and she was in for an emergency hip replacement on Friday morning. This was followed up with more chemo and radiation treatments. Chemo is not effective against brain tumors because of the blood–brain barrier, a highly selective permeable barrier that separates circulating blood from the brain’s extracellular fluid. The brain tumors have been zapped with Gamma Knife and Cyberknife radiosurgery procedures. It is hard to comprehend what she has gone through but as with so many overwhelming situations, we just take it a day at a time. 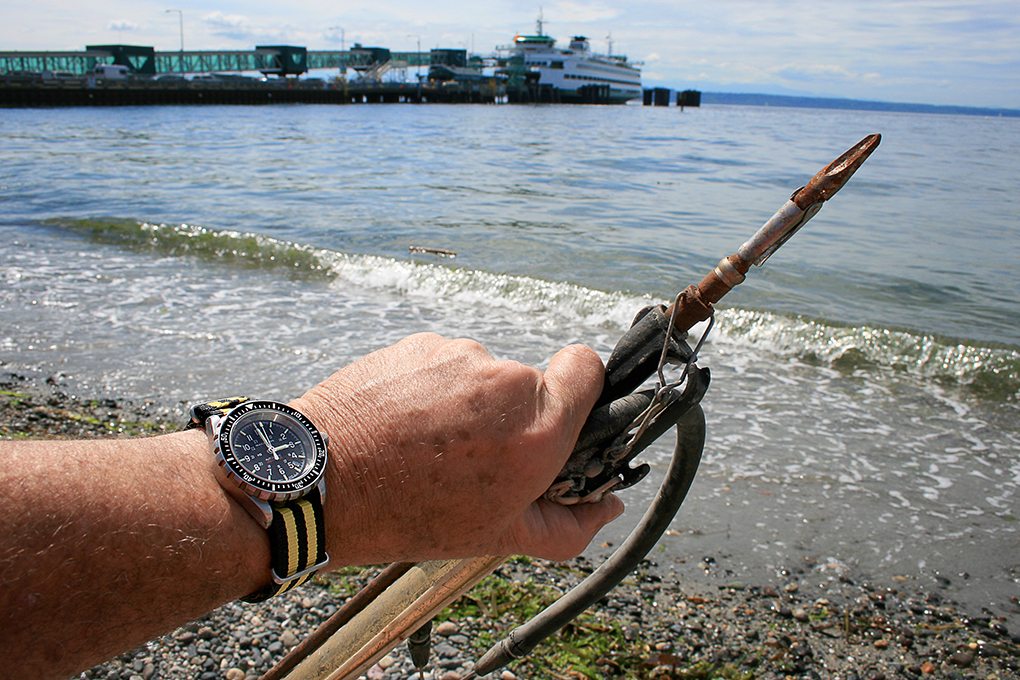 I have a modest collection of watches that leans toward the diver designs. One of the first watches I purchased when putting some serious thought and research into developing a collection was the ubiquitous Seiko Orange Monster [aBlogtoWatch Orange Monster eBay Buying Guide here]; A solid watch that whetted my appetite for the amazing machines that we wear on our wrists. I have since added several new watches and a couple of pre-owned watches that piqued my interest. The Marathon Diver’s Automatic fits right in with this collection and ticks off several categories of my collecting feature checklist. 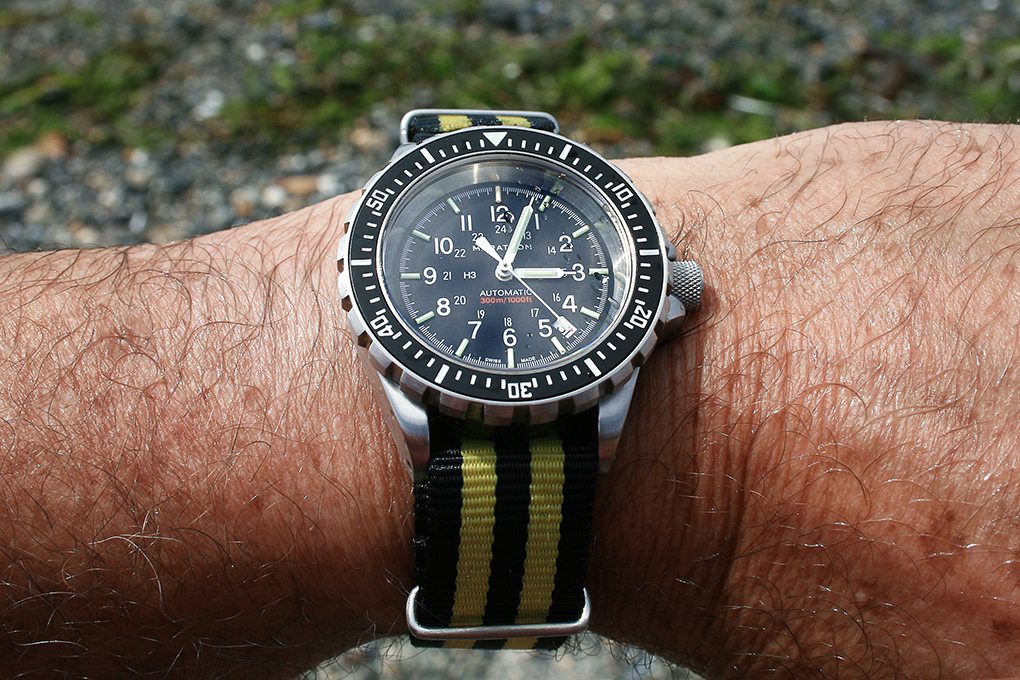 One reason that I love diver watches is that I am a second-generation SCUBA diver in Puget Sound in Washington State, USA. I did a fair amount of recreational diving in the late ’70s and the ’80s. At the time, I didn’t have a decent dive watch. My father, however, was one of the SCUBA pioneers in the early ’60s. His club would buy bulk neoprene sheeting, locate patterns, and then spend a day cutting out wetsuit pieces and gluing them together. At the time, there were not many wetsuits that you could buy off the rack. We also melted scrap lead to cast diving weights (we didn’t know the health issues of working with lead way back then). When the Tacoma Point Defiance North Pacific Aquarium opened in 1963, my father’s club, The Tacoma Scubaneers, organized a dive to collect specimens for the aquarium displays. Many species from nearby Puget Sound were gathered such as sea urchins, abalone, rockfish, and the Giant Pacific Octopus. The ’60s were a fascinating time and many things that happened then could never be recreated: my father placed third in the 1963 World Octopus Wrestling Championships. Enough about me – back to the Marathon Diver’s Automatic “GSAR” watch!

This timepiece is a solid tool watch. The case is robust with a fine brushed finish. The lugs are fairly short but thick, with a lug-to-lug size of approximately 47mm. They are also drilled for quick band changes, of which I have taken advantage. The watch sits well on my 7¾-inch wrist. The contoured crown guards protect a large, well-knurled crown with no branding. It appears easy to manipulate while wearing gloves or diving gear. The screw-down action is smooth and shows little possibility of being cross-threaded by my ungraceful digits.

The flat sapphire crystal is slightly raised above the bezel. The unidirectional bezel is very legible and has a silky action, but the detents are positive, and it does not easily rotate when accidentally bumped. The bezel itself composes nearly half of the thickness of the watch. It looks like a large gear or sprocket; once again, easy to rotate with gloves or diving gear. Under the crystal is a deep chapter ring that is polished and reflects the indices slightly, which makes the dial appear larger. This effect is quite evident in the dark when the H3 tritium tubes are glowing. 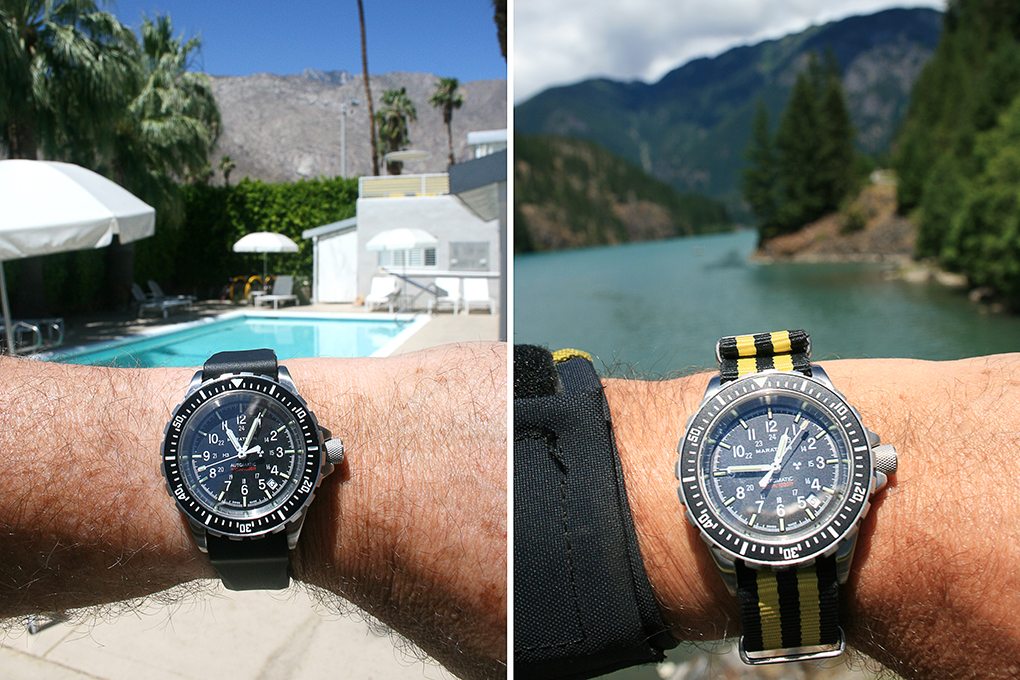 Aside from the red “300m\1000ft” water resistance rating, the flat black dial has sharp, clean white markings that make the watch quite legible and easy to read in any situation. Two items on the dial that fit into the “cool” factor are the “H3” branding for the tritium tubes and the radiation warning symbol. It’s also nice that the information etched on the case back lets you know that it only contains 26 millicuries of radiation. The date is at the 4:40 position and is black on white. Normally, I prefer the date background to match the dial color, but on this watch the white background allows for easy locating and reading. 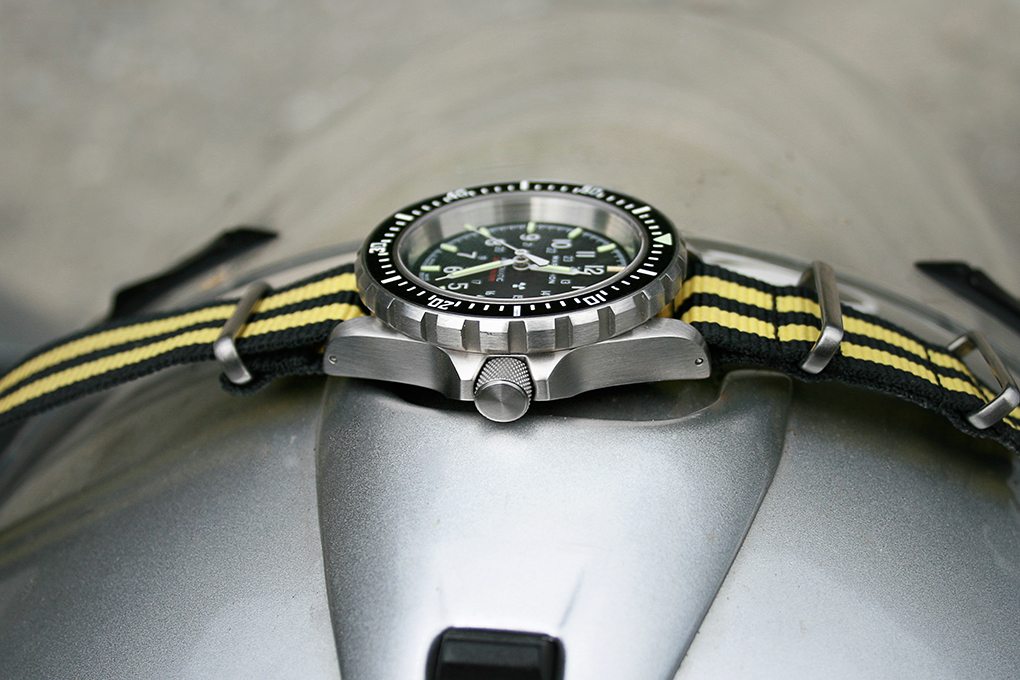 Earlier, I mentioned that this watch had features that I wanted in my collection. The H3 tritium tubes are one such item. When the lights go out, this watch lights up! I had to go back and re-read the aBlogtoWatch article about the H3 Tritium Systems Manufacture. Here in the Seattle area, we have long nights in the winter. The luminescent paint on many of my watches won’t hold a charge from sunset at 4:00pm till sunrise at 10:00am. My wife has one of those clocks that projects the time on the ceiling for easy timekeeping at night. Regardless, I still look at this watch just to see it glow! The 12 index has an orange tube to ensure that the watch is properly oriented when reading the time. The hour, minute, and second hands have tritium tubes that fit the hands. The hands are long enough to reach their respective markings on the dial. There are also 24-hour markings for the military customers.

Another feature that I was excited about was the ETA 2824-A2 automatic movement. As I mentioned, my collection is not made of high-price items. This is my first ETA movement watch. Not a big deal for many collectors, but a big milestone for me.

It was delivered with the stock Marathon rubber strap. I’m not a big fan of rubber or silicone bands, but this one is pliable, fit well, and the vanilla scent sealed the deal! The Crown & Buckle #timeforacure team NATO straps showed up a week after the watch arrived, and I have been wearing this strap since. It is bold and well-made.

Big thanks to aBlogtoWatch, Matt and his cycling team, Marathon Watch, and Crown & Buckle for their support.